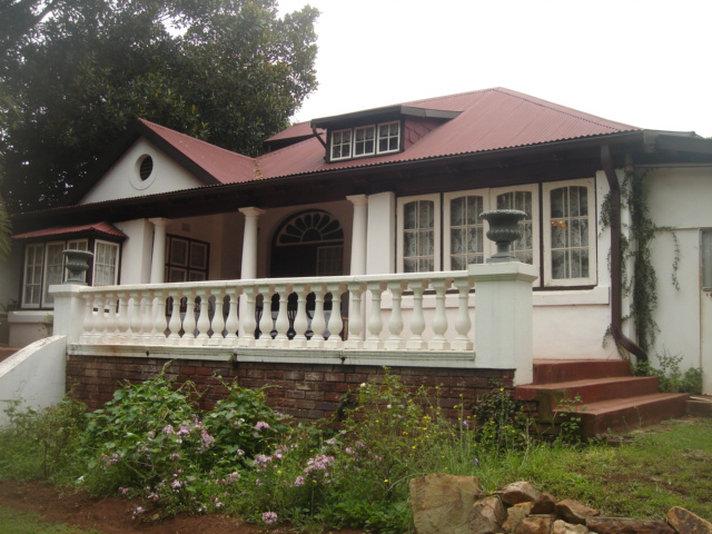 In the article below, journalist Lucille Davie takes a journey around Lindfield House, one of Joburg's unique historic attractions. The piece was first published on the City of Johannesburg's website on 19 January 2011. Click here to view more of Davie's work.

Back in Victorian times the wealthy didn’t mess with security: they posted an armed guard, in the form of the footman, to sleep where the silverware was stashed - in the butler’s pantry.

He would make himself comfortable on a fold-out canvas and wood stretcher, position his rifle alongside the bed, and settle down in the tiny room. His job was to guard everything from silver teapots and teaspoons to silver hairbrushes.

It’s not difficult to imagine this taking place in the Victorian home of Katharine Love in Auckland Park.

Her Herbert Baker house was built around 1910, on half an acre of land, like all the other properties in the suburb.

Love says her house was built for Dr and Mrs Stanwell. The house has been altered and extended over the years. In 1924 a partner of Baker, AJ Marshall, made changes. In 1933 Nellie Edwards, the city’s first woman architect, added more rooms.

And just before Love and her mother bought the 22-room house 13 years ago, the shingle roof and two tall chimneys were removed, plus a good deal of the period features.

Love was born a block away, and when the Apostolic Church offered to buy her parents’ house and demolish it to build a church, she and her mother saved fireplaces, doors and windows and have perfectly re-created a Victorian house in Lindfield.

Her mother had a passion for collecting antiques, which now fill the house.

“My mother hunted everywhere,” explains Love. She would walk into a shop selling modern furniture, and find an antique piece tucked away behind other furniture. “She had a feeling for it.”

When her mother passed away Love assembled the Victorian pieces in the rooms, and some 10 years ago started giving tours of her living museum. 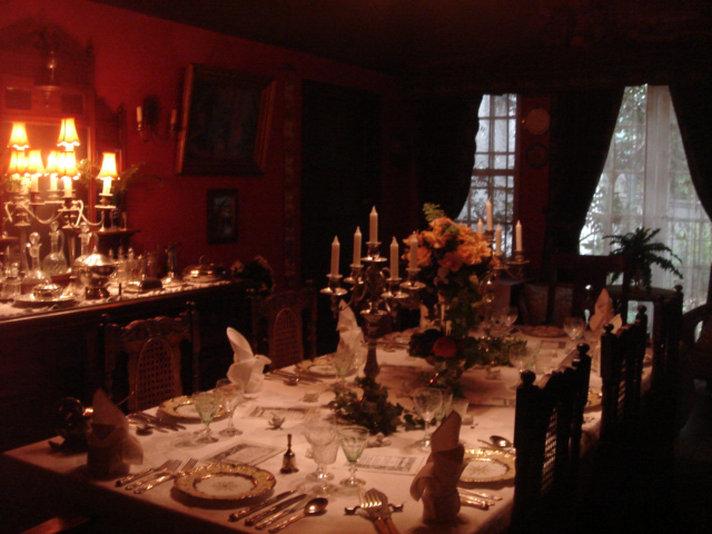 A walk into Victoriana

So you’ll walk into the entrance hall, where you would present your visiting card, then be ushered into the elegant drawing room, where, among the overcrowded Victorian artefacts, furniture and colourful wallpaper, you will take tea.

If you were a favoured visitor, you were invited for dinner, and would take your seat at the meticulously laid dining table, in front of the floor-to-ceiling fireplace. If you were a man, you’d remain in the dining room after the meal while the women “withdrew” to the drawing room.

You would have port and smoke cigars with the other men, and conveniently relieve yourself in a potty so that you didn’t have to leave the congenial conversation in the dining room.

The man of the house could later retire to the library for more cigars, but he’d have to don his smoking jacket, slippers and cap. These items were left in the library, so that the smoky smell wouldn’t permeate the rest of the house.

He might later take a bath in the bathroom, for exclusive use by him. His wife would bath in the bedroom, wrapped in a cotton poncho, sitting in an uncomfortable iron hip bath, in front of the fire, and attended by her maids.

She would seldom interfere in the raising of the children, who would live at the back of the house. The babies would share their bedroom with the nanny, while the teenage children would have their own bedrooms. The children would spend most of their time in the playroom, or the natural history room, and take their meals in their own dining room.

The man of the house had a separate bedroom coming off the main bedroom he shared with his wife, so that if he was feeling otherwise he could sleep separately from her. This also gave him the chance to sneak out and meet with his mates, or pay visits to "lady friends".

Definitely a man’s world, with the woman of the house keeping herself occupied with embroidery, writing letters, reading, or playing an instrument in the music room.

Baker characteristically built houses with small windows, and Victorian etiquette entailed lace and extravagant curtains at every window. The result is that most rooms were gloomy and slightly musty, the windows remaining mostly shut. 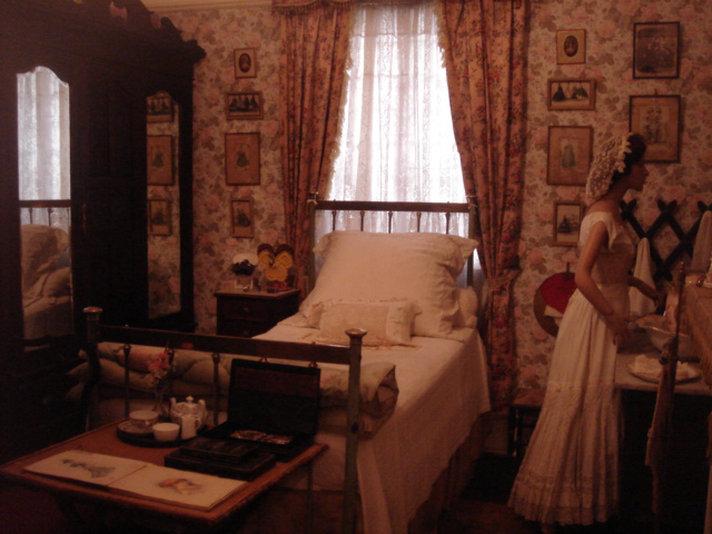 One of the bedrooms at Lindfield House (Lucille Davie)

Those Victorians were ingenious when it came to inventing things. Lindfield is filled with every possible gadget or device to make their lives easier.

There’s the knife sharpener, a contraption containing an abrasive emery and wire brushes. The knife is slotted into this odd wooden barrel and lifted in and out several times to be sharpened and polished. These were the days before stainless steel.

Or the simple but smart walnut crusher. Or the large silver teapot with its accompanying kerosene flame to boil the kettle in the drawing room, where the tea was stored. At one time quality tea was expensive and to prevent theft by the kitchen staff it was locked away in the tea cabinet in the drawing room. The lady of the house would make the tea herself.

The tea cups were shallow and wide-rimmed, for a reason. If you stopped in uninvited you were given one of these cups so that you would drink your tea quickly before it got cold. Then the host would get rid of you quickly.

Some tea cups had a special built-in ledge on which the men rested their moustaches while drinking tea.

Ladies used to sit at the fire behind a “banner screen”. This shielded the heat from their faces so that they retained their pure, peachy complexions.

The house contains dozens of such gadgets, all meticulously researched by Love.

She adds another element to her tours – she dresses as a Victorian maid, in traditional black dress with white apron. She even has the reserved, retiring demeanour of a Victorian maid.

She leads a reasonably Spartan existence in the house, rejecting modern conveniences like a cell phone and a vehicle. She says the house is cold in winter – she bundles up and keeps warm in the drawing room with a rabbit fur-lined foot muff – but she does use an electric blanket on her bed. And she doesn’t use the uncomfortable hip bath! 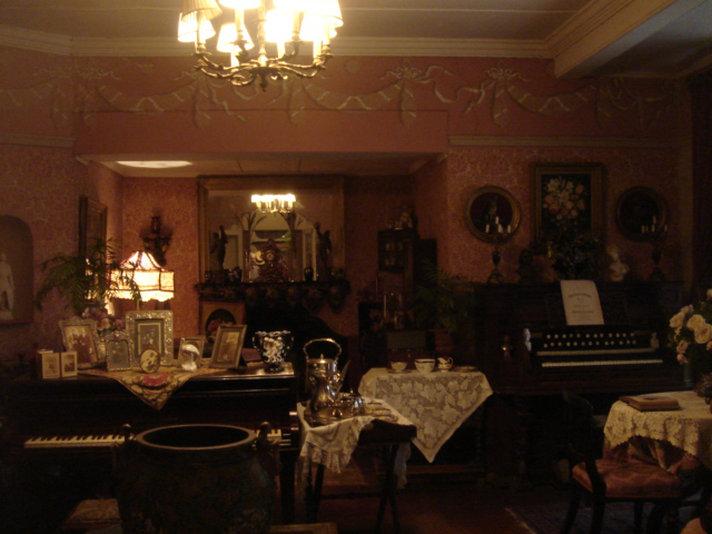 Auckland Park was laid out in 1888, two years after the gold-rush town was established.

It took its name from New Zealand’s largest city, Auckland, given to it by New Zealander John Landau, who bought the farm of Petrus Lindeque, on the present site of the Johannesburg Country Club. It reminded Landau of a valley near his home in Auckland.

Landau turned the farmhouse into the Auckland Park Hotel, in competition to the nearby Sans Souci Hotel. He constructed a lake, to attract residents “into the country”, and held concerts in the grounds. In 1906 the hotel became the country club and the lake disappeared in the grounds of the club.

When The Standard carried the first advert for the sale of stands in the suburb, it showed an entirely different plan to how the suburb looks today, with numbered streets. By 1905 the suburb was restructured, and an employee of the Auckland Park Real Estate company, Horace Collins, renamed the streets after places in the Thames valley in London, and after streets associated with the London office of the company.

So we get names like Wargrave, Molesey, Twickenham, Finsbury, and Kingston avenues, alongside Cookham and Taplow roads.

Anna Smith in Johannesburg Street Names says the suburb was always known for its bluegums, planted by JH hardy in 1888, when he built the first house in the suburb.

Some of the offspring of those bluegums can still be seen in the suburb, alongside the beautiful chunky trunks of dozens of plane trees. In Richmond Avenue a huge oak tree stands, planted from an acorn by Bill Wilson, whose father brought back the seed from service in WW1.

A drive through the suburb reveals some old gems, like the grand house Julius Jeppe built in Molesey Avenue. He built another home each for his daughter, his son, and his butler.

The suburb’s other claim to fame is the visit and stay of the Prince of Wales, later the Duke of Windsor, who visited the country in 1925. He was accommodated at 1 and 2 Greenlands Road.