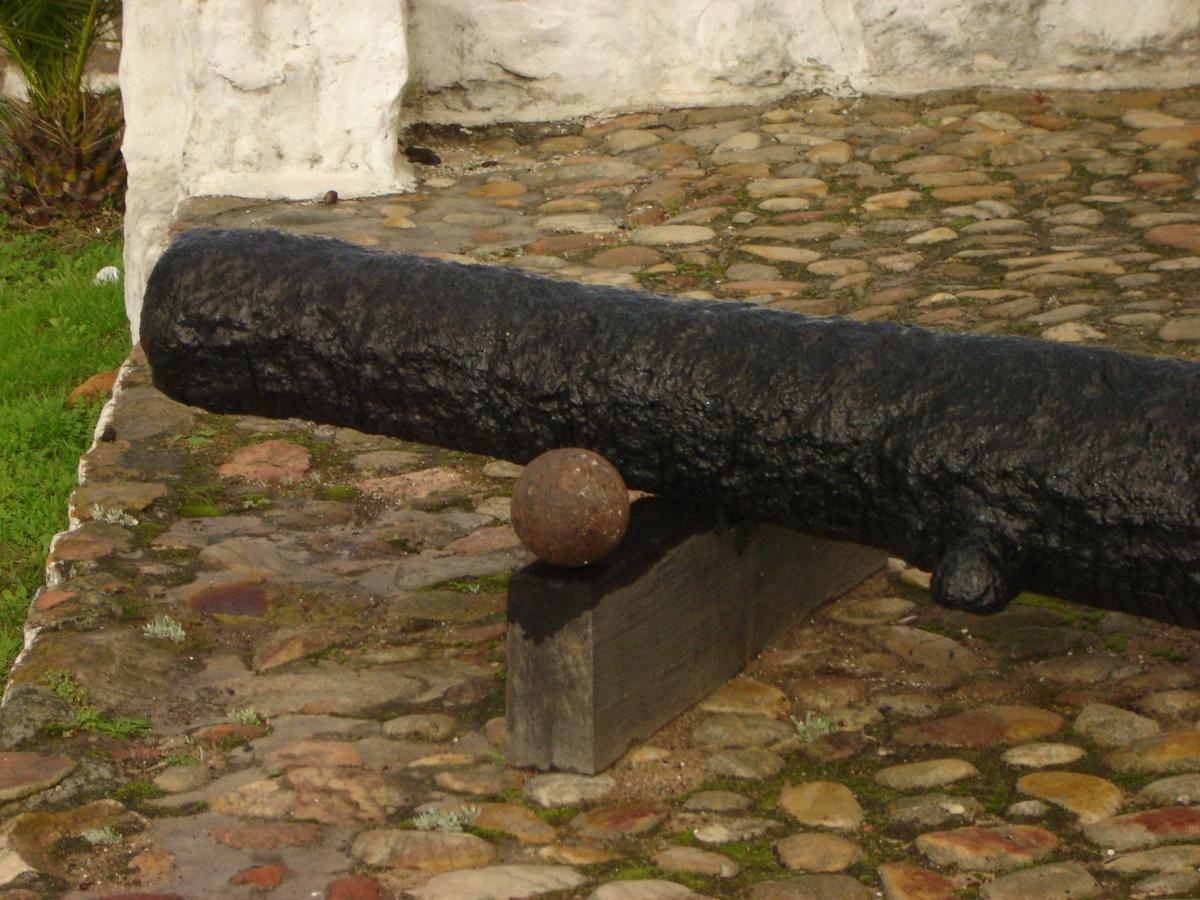 We are honoured to publish this fascinating piece compiled by Chris Taylor of the Muizenberg Historical Conservation Society. It tells the remarkable story of the 2014 discovery of a cannonball that was fired during the Battle of Muizenberg (1795). Thank you to Colin Johnstone for sending it through. [Originally published in May 2014]

[In 2014] Derek Stuart-Findlay of the Kalk Bay Historical Society gave a cannonball to the Muizenberg Historical Conservation Society, knowing that the Battle of Muizenberg is a special focus of ours. The ball was dug up in his garden by Naseegh Jaffer of Ley Road, St James, and it tells a story.

Because we have excellent detail on the actions and participants of the Battle of Muizenberg we can work out a great deal of information on the cannonball. It was found between Ley Road St James and Boyes Drive, quite high above sea level.

It is a 24-pound cast-iron ball, cannons being classed by the weight of the shot they threw. The only time cannonballs have ever been fired on this coast was the Battle of Muizenberg, 8th August 1795. Four ships of the Royal Navy took part in the Battle of Muizenberg on that date. The ships were HMS America (3rd rate, 64 guns), HMS Stately (3rd rate, 64), HMS Echo (sloop, 16) and HMS Rattlesnake (sloop, 16). The sloops were small and light, and only carried little guns, probably no more than 6-pounders, so the ball could only have come from one of the 64’s.

We have it on record from the log of HMS America that she fired at the Dutch picquet at Kalk Bay. The entry reads “at half past 11 weighed anchor... sail in company with Stately Echo and Rattlesnake and 3 gunboats 10 minutes past 12 fired at a three gun battery which the Enemy quitted”. Twenty minutes later they dropped anchor off the Dutch fortifications and opened fire on the defenders, who were spread from the current Posthuys to at least Rust en Vrede, and I believe were concentrated above the Casa Labia and Bailey’s Cottage. It is likely that the ball was fired during the main action.

The 64’s had two gun decks; a main gun deck which carried the heavy 24’s, and an upper gun deck which carried 18-pounders. The weather deck was kept clear of guns because all the deck space was needed to work the ship. Of the two 64-gun ships that carried 24-pounders, HMS America was facing the St James area during the skirmish.

Of special interest is that the ball was found where it was, above Ley Road St James, not far below Boyes Drive. The cannon fire was directed at the ground around Bailey’s Cottage and Casa Labia, so the ball was way off target and much too high. This neatly illustrates the point that often misfires meant the cannon only went off some seconds late, when the ship had rolled on the swell, and the gun was no longer pointing at the target.

If readers would like to know more, we run regular walking tours from Muizenberg to Rhodes Cottage which covers the Battle of Muizenberg (and much more). Email info@desertart.co.za for details.