A love of pets might be seen as a modern trend and reaching ever higher popularity. People nowadays even subscribe to medical aid for their pets. They have them micro-chipped so that when the animal might become lost, the information of the owner can be ascertained by reading this chip. People even have their beloved pets cloned, so that they, in perpetuity, can have their pet with them.

Dogs were domesticated between 20 000 and 40 000 years ago. They mostly became part of the household of the ancients to serve a purpose, such as hunters and protectors. Probably the only breed that has not been bred to serve a utilitarian purpose, but to only be a pet, is the Pug. In ancient times they were highly valued by Chinese emperors.

By the time Potchefstroom was a bustling town in the last half of the 19th century, dogs were an integral part of the community. Photographic studios were readily available and people visited these studios to have their visages immortalised, and it seems that often the pets were also included.

When the Bodenstein family visited a photographic studio in Potchefstroom to have the family picture taken, their big black dog was taken along to be included in the picture. Subjects of a photo had to keep their pose for at least twenty seconds in order to have the photo properly exposed. Looking at the picture, it seems that the young boy lying in the front was tasked with keeping the dog still. And it seems that the dog co-operated quite well so that it is reasonably in focus.

Bodenstein Street in the suburb of Baillie Park was named after the magistrate, JC Bodenstein, one of the first magistrates of Potchefstroom during the 1860’s. Bodenstein was magistrate when the Reformed Church applied to acquire the old market square in 1863 for the building of a church. In the civil war of the early 1860s, when Stephanus Schoeman tried to usurp the presidency from MW Pretorius, Bodenstein sided with Schoeman. He was subsequently brought before the Supreme Court in Pretoria in February 1861 and was accused with four others. Bodenstein was the only one present at court. After the intervention of the later President Paul Kruger he was only fined £15, whereas the others were fined £100 each.

By 1895 another JC Bodenstein bought the property of the former president MW Pretorius which would in the 1980’s become the President Pretorius Museum. The photo in which the dog features portrays the family of this Bodenstein, although the patriarch had already passed away and only his widow and offspring are pictured. 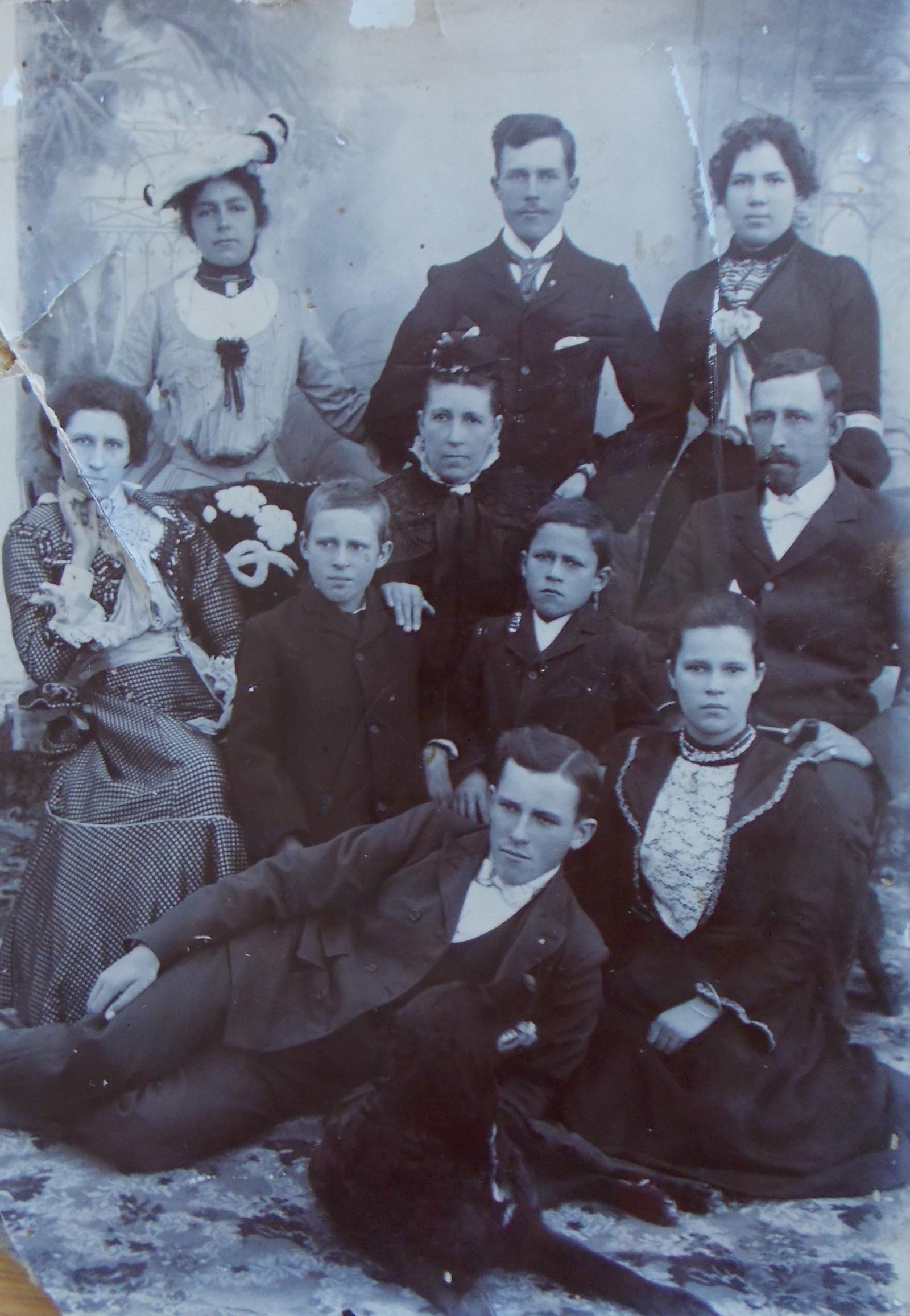 The photo of the Bodenstein family taken in June 1902 in Potchefstroom. (Potchefstroom Museum)

When the first photograph of the staff of the Experimental Farm in Potchefstroom was taken, one of the staff members brought his dog along. The pose of this dog and master indicates a rather strong relationship.

This picture of the staff of the Experimental Farm was taken in 1904. The first manager was a Scotsman, Alex Holm, who is seated in the middle with the white hat. According to the inscription on the back this is the “original staff, employees and assistants”. 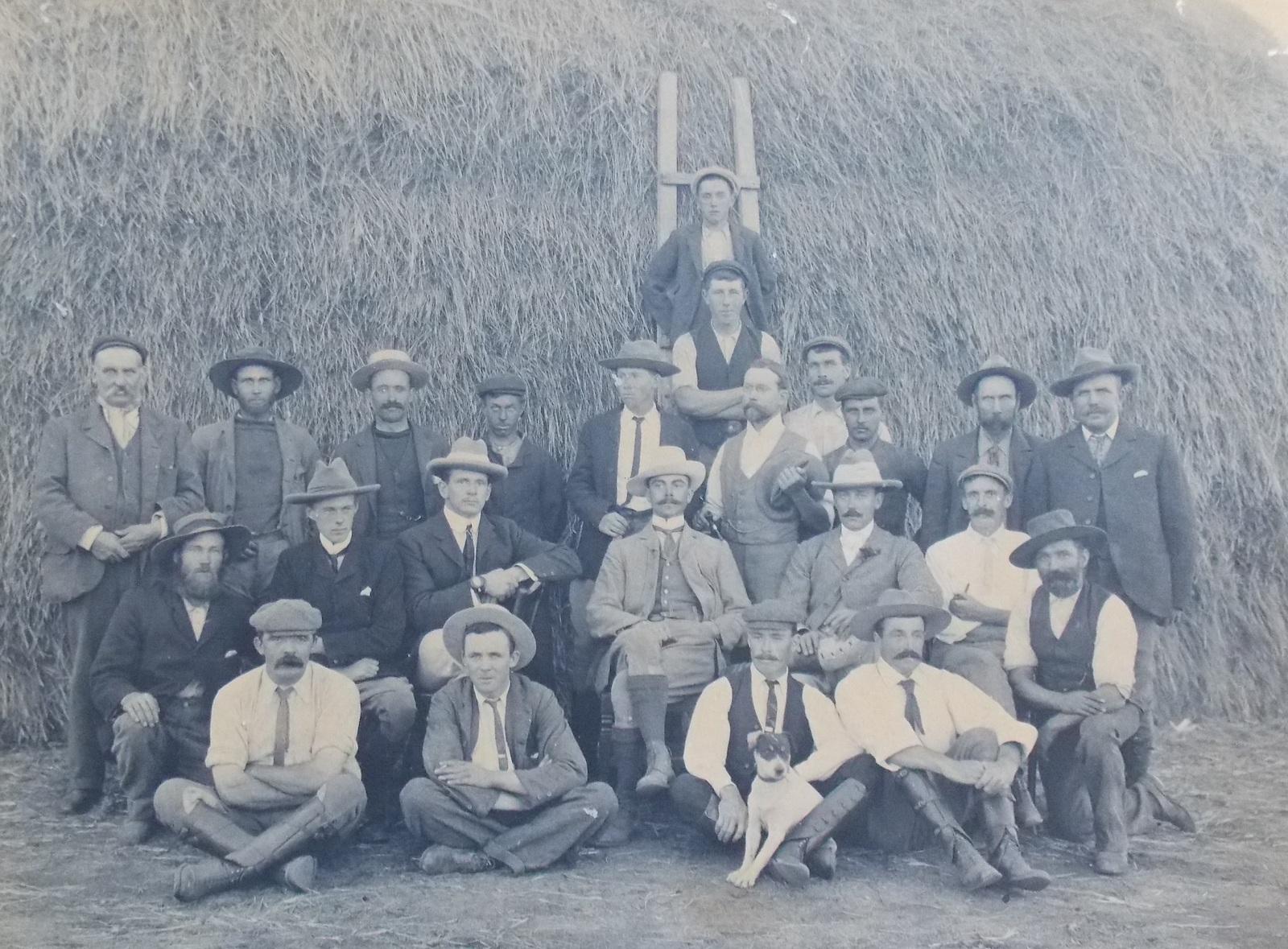 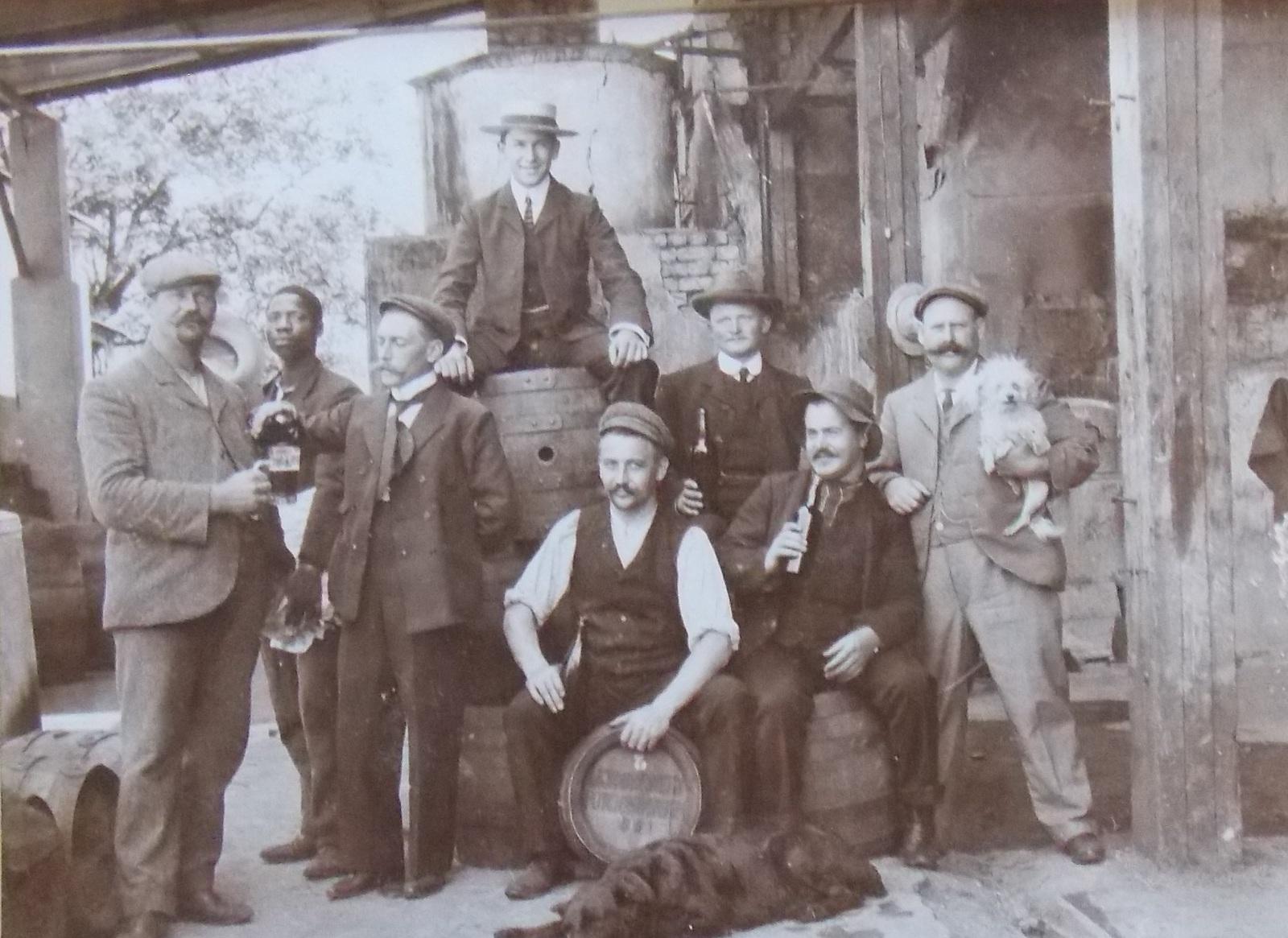 When a photograph was taken of the staff of the Lion Brewery in Potchefstroom, not one but two dogs graced the picture. Again a big dog seems quite at home on the ground in front of the staff. A little other mutt, seemed quite happy in the arms of his rather robust master. (Potchefstroom Museum)

One of the many photographers operating in Potchefstroom at the beginning of the 20th century was August D’Ange D’Astre. This grandson of a French count was also the grandson, from his mother’s side, of the well-known snuff merchant and painter, Otto Landsberg. He came to Potchefstroom during the early 1900’s and immortalised many sights of Potchefstroom. A large part of his collection of glass plate negatives is in the collection of the Potchefstroom Museum.

D’Astre took this photo of a family, whose name is not known, who booked him to take a picture of the family in their Humber. The car was manufactured between 1903 and 1906. The family thought it important that their three white dogs be arranged to be included in the photograph. Again, how the photo was achieved with the dogs not moving and blurring the picture, is a mystery. 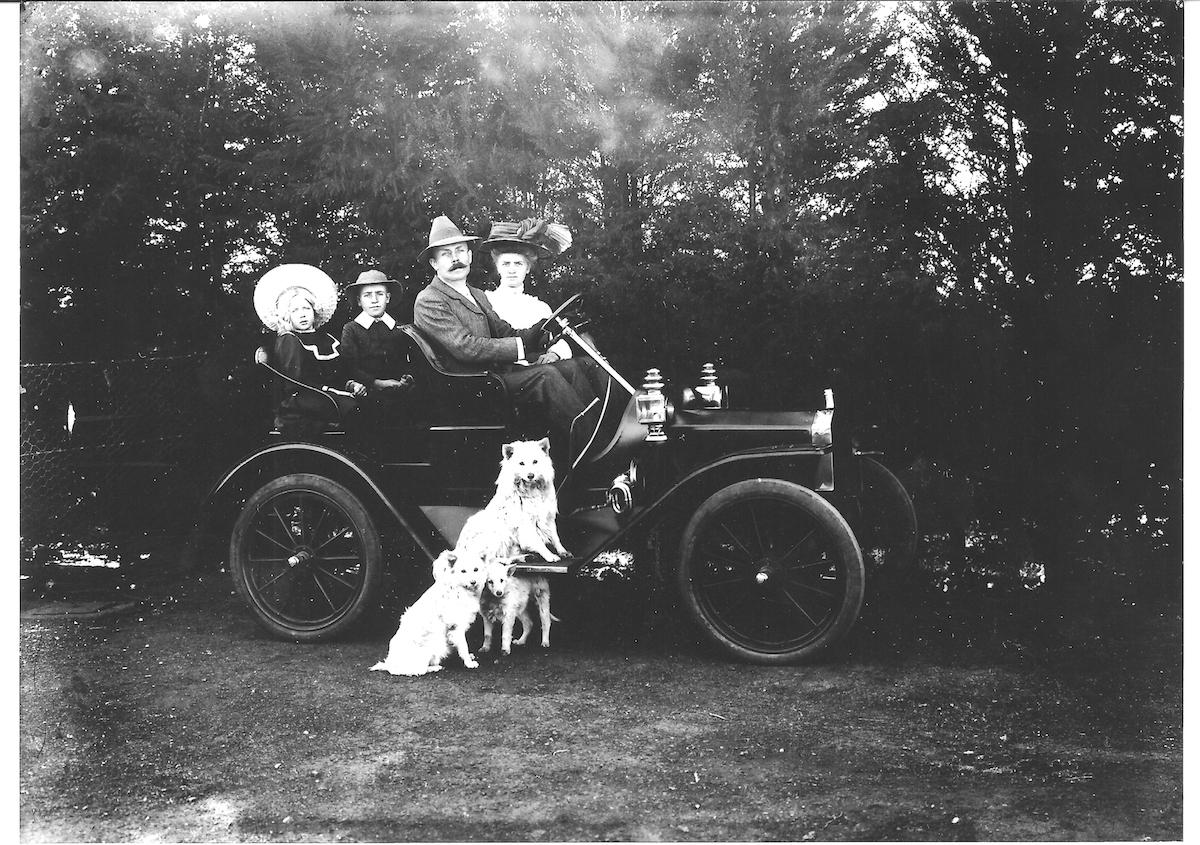 The Potchefstroom photographer, August D’Ange D’Astre, took this photo of a family in their Humber car. (D’Astre) 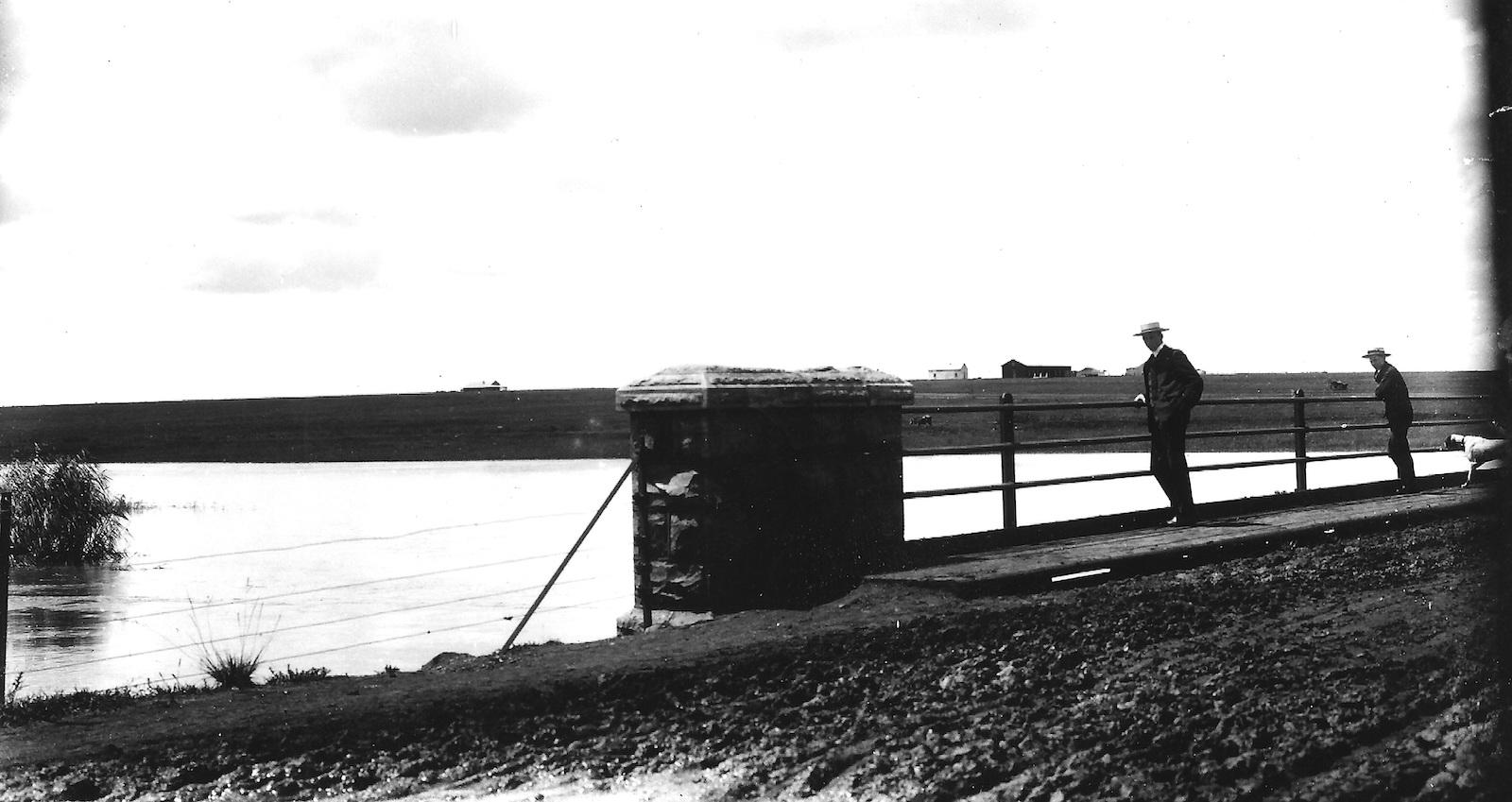 When the Mooi River flooded, probably in January 1910, D’Astre took this photograph of the bridge that was then known as the east bridge. It crossed the Mooi River at the eastern end of Lombard Street (James Moroka). Today the suburb of Baillie Park is situated in the area beyond the river. It seems that the dog at the right of the picture is more concerned about the flooding waters than the humans in the picture. 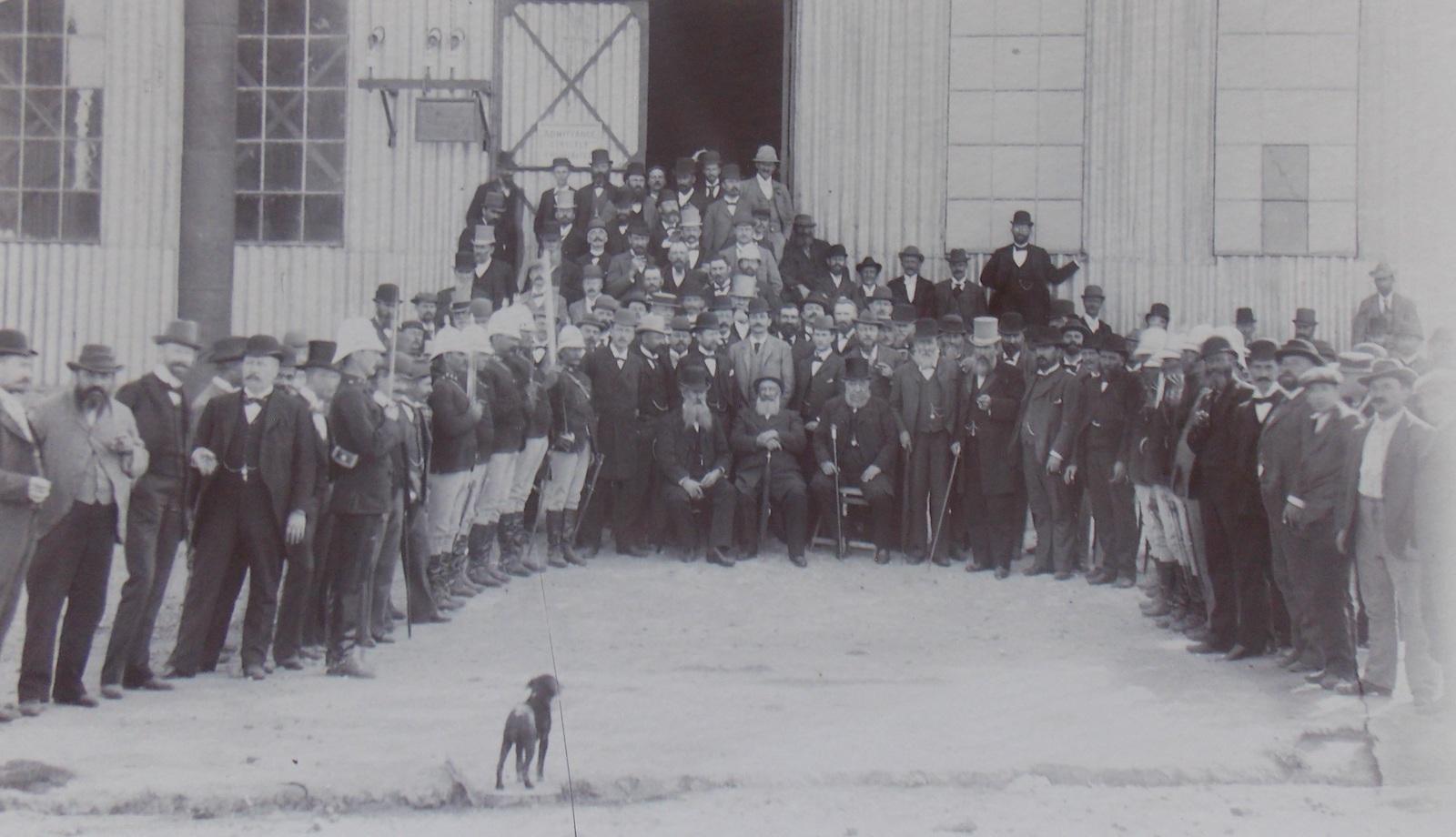 The inauguration of the railway line between Potchefstroom and Johannesburg was a momentous occasion. It took place in 1897 and President Paul Kruger attended the ceremony (seated to the right). The dog in the foreground seemed to have wandered inadvertently into the picture. (Potchefstroom Museum)

Albert Reinholdt Fleischack (1860-1933) was an attorney in Potchefstroom and legal advisor to the town council, as was his son, Gilbert. He held prominent legal appointments in the ZAR during and after both wars of 1880-81 and 1899-1902. 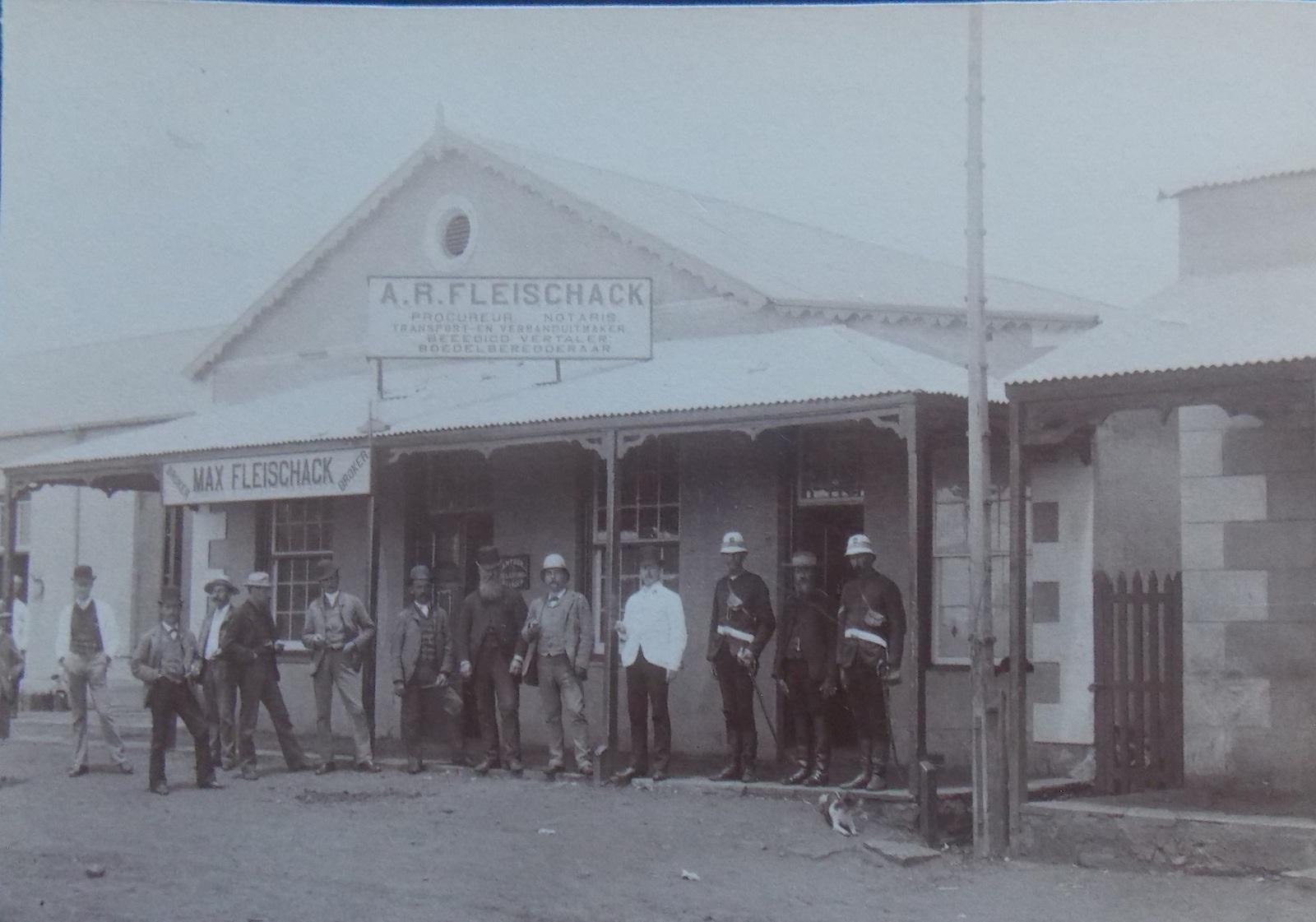 A photo from the late 19th century shows the offices of attorney AR Fleischack with a dog gracing the picture. Max Fleischack, whose signboard is also visible, was a photographer and most likely took this picture. (Potchefstroom Museum)

When the attorneys firm Messrs Haarhoff and Du Toit opened in Potchefstroom (date unknown) the occasion was immortalised with a photograph. Again a dog posed with the humans, but this one was not as well-behaved as the other ones in these photographs and he is just a blur. The firm was later known as Messrs Williams, Gaisford and Steyn and even later as Messrs Gaisfords Attorneys, who lasted until the 21st century. 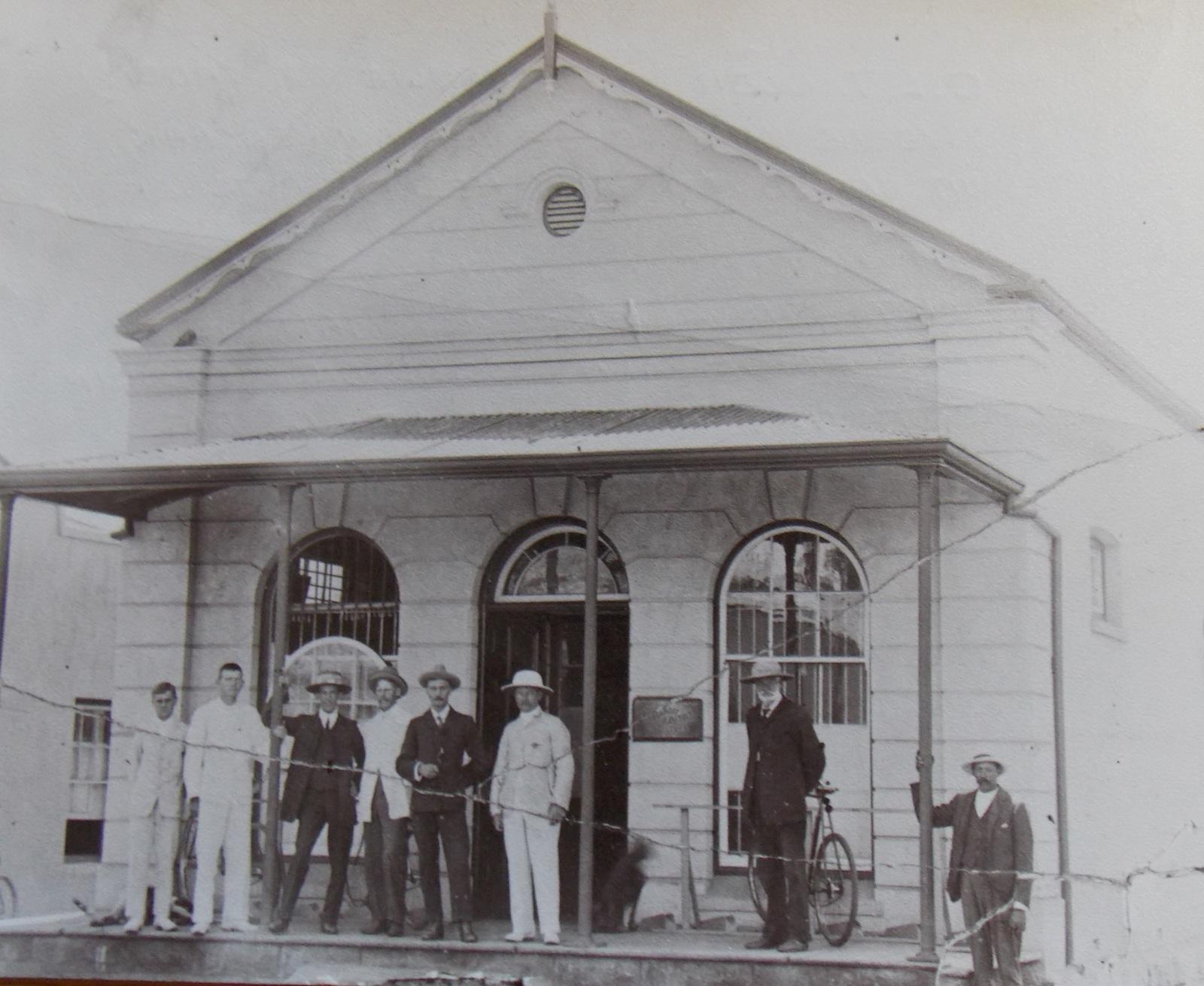 The caption on the back of this photographs tells us that the photo was taken when the attorneys firm Messrs Haarhoff and Du Toit opened their doors. Although the partners of the firm are not identified, the gentleman with the white beard, second from right, was Mr Carl Ludwig Theodore Olën (1846-1911). He was one of the original Swedish immigrants who came to Potchefstroom in 1864 to found an irrigation farm on the banks of the Vaal River under the leadership of OWA Forssman. The endeavour did not succeed and some of the immigrants went back to Sweden. Forssman became a well-known businessman in Potchefstroom and in the ZAR, as well as Portuguese ambassador to the ZAR. CLT Olën came to South Africa at the age of seventeen. He first worked as a clerk at a shop and later founded his own transport business and mill. The street in the area where his business was, was named after him. (Potchefstroom Museum) 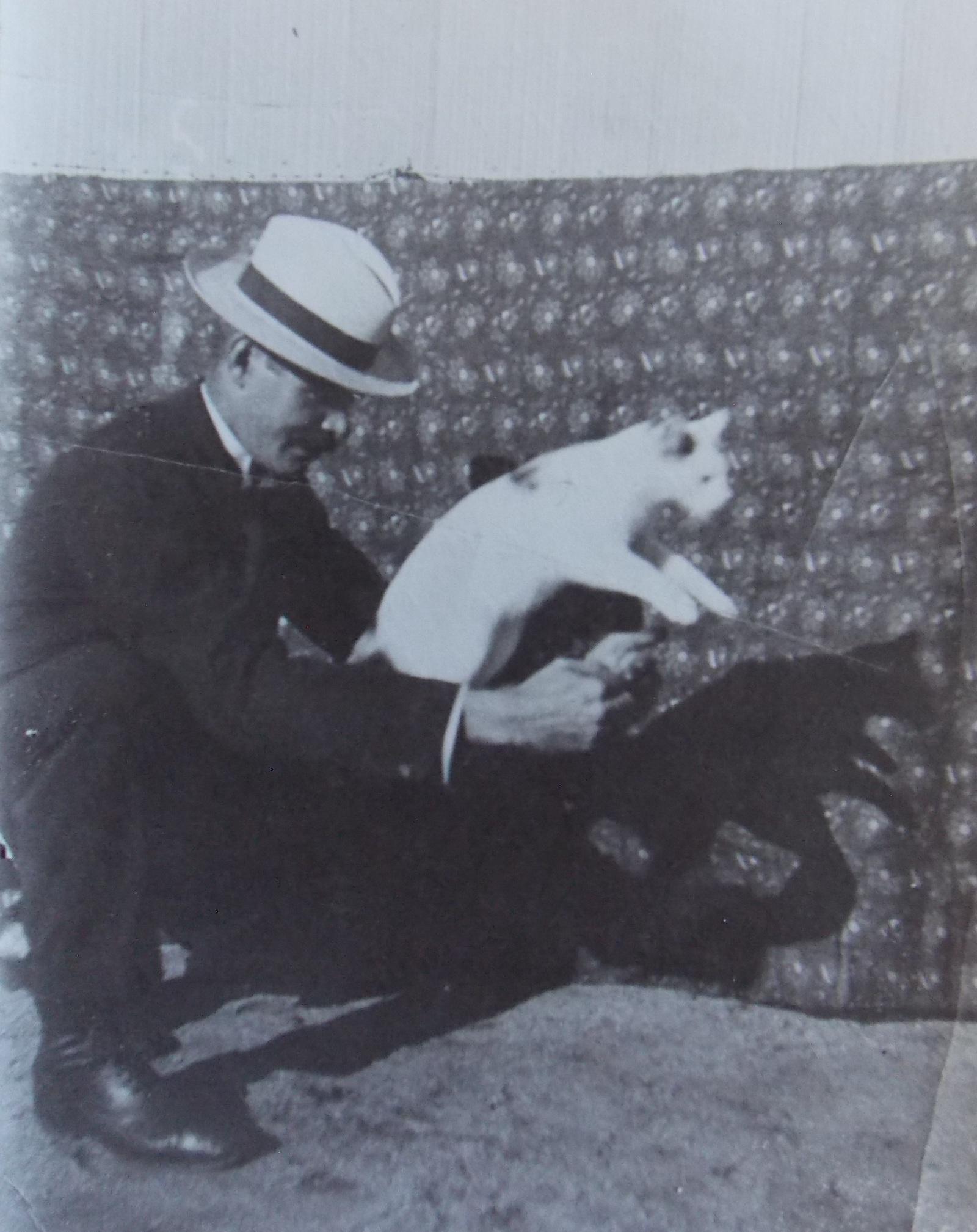 The caption on the back of this picture identifies the man as “Oom Charlie” Olën (1877-1952). He was named after his father CLT Olën, mentioned above. During the Anglo-Boer War he stole the pet cat from a ship’s captain of the ship where he was held as a prisoner of war. Olën was taken prisoner on 18 May 1900 at Christiana. He was removed to a harbour city, but it is not clear where. Rumours that General Christian de Wet were to make a breakthrough in the area and relieve the prisoners were rife and the prisoners were transferred from the camp to a troop ship in the harbour, to be taken to Ceylon (Sri Lanka). After a few days it appeared that the rumours were false and the prisoners were taken back to the camp. Olën smuggled this cat, the pet of the captain of the ship, with him back to the POW camp. (Potchefstroom Museum)

These pictures show man’s best friend has been valued through the ages. The quote by Roger Caras, “dogs are not our whole life, but they make our lives whole,” seems to have been applicable as much to the 19th century residents of Potchefstroom, as it is today.