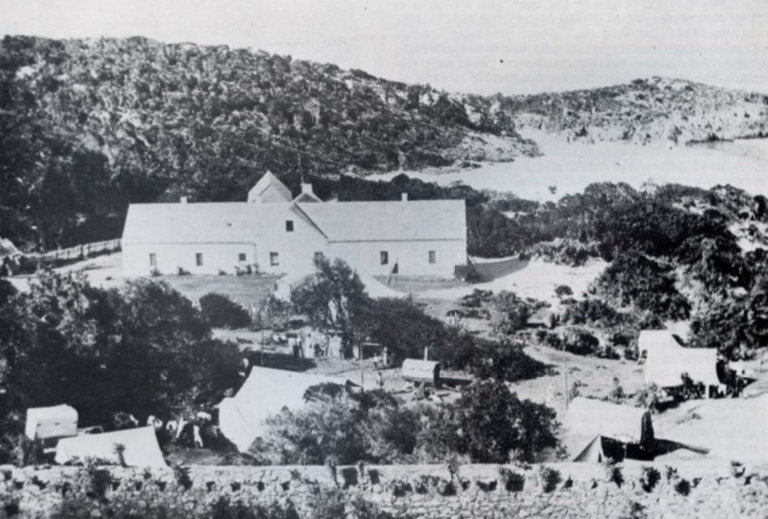 The following article, looking at the history of the Old Rectory in Plettenberg Bay, was written by Patricia Storrar and appeared in the 1981 edition of Restorica, the journal of the Simon van der Stel Foundation (today the Heritage Association of South Africa). For current details on the structure and more history of Plettenberg Bay contact the local historical society (click here for details). Thank you to the University of Pretoria (copyright holders) for giving us permission to publish.

Historically speaking, by far the most important building in Plettenberg Bay is the one known today as the Old Rectory. It is one of the few substantial structures in the Eastern Cape remaining virtually intact from the days of the Dutch East India Company. It adjoins the Old Timber Shed, which was proclaimed a National Monument in 1964 but is older than the latter by 10 years.

The first evidence that there was a fairly large building on this site in 1777 appears on a map of that year by an unknown cartographer, on which it is marked as "Verblijf voor het valk". On J .C. Frederici's better-known map of the "Platte Grond van S.E. Compagnies Post in de Plettenberg's Baay", drawn 12 years later, the structure is marked as "Project tot de Militaire Logies" and on another Frederici plan of the same period as "Militaaren Logies".

It was not surprising that it was thought necessary to house some military personnel at the Bay (then thought to be a promising harbour) towards the end of the 18th century, because of the unsettled state of affairs in Europe. Holland's declaration of war on Britain in 1780, Britain's attempt to capture the Cape in 1781, the French Revolution in 1789, the Revolutionary Wars of 1792 and finally the occupation of the Cape by the British in 1795 - all these events would have made those controlling the affairs of the Dutch East India Company nervous about the possibility of an attempted landing by a hostile power on this lonely stretch of coast.

All indications are that from the time the timber shed was reconstructed in 1787 (it is shown as an ''ingevalle hout huis" on the map of 1777) the substantial house next to it was used to house employees of the Company, who supervised the storing of timber in the hout huis and arranged for its shipment to the Cape. There is no mention in the records of any alterations being made to the militaaren fogies (the house which is the subject of this article) until 1887, when the two wings of the building were joined and a new roof of corrugated iron replaced the worn-out thatch. Everything indicates, therefore, that the main structure stands today very much as it did two centuries ago.

It is quite likely that the house may have fallen empty during the first British occupation (Johann Friedrich Meeding, the Postholder had by then built his own fine house but it was reoccupied early in the 19th century and from the time of the First Britsh Occupation onwards became known as The Barracks.

The most noteworthy occupant of the house in the first half of the last century was John Archibald Sinclair, the first man to undertake whaling professionally in Plettenberg Bay. He and his wife, Julia Maria (eldest daughter of the first Government Resident of the Bay, Captain Robert Charles Harker) seem to have lived here from the time they were married until his death in 1859. Both Sinclair and his wife were keen supporters of the first chapel to be built in Plettenberg Bay, St. Andrew's Chapel, Redbourn (built 1850/51) and it was understandable that they, being owners of the only roomy, important house in the Bay, should be among the first to entertain Bishop Robert Gray, first Bishop of Cape Town, on some of his visits to the isolated little community.

In 1850, for instance, the Bishop and the local catechist, Charles Bull, had an early breakfast with the Sinclairs before riding to Redbourn where the Bishop was to conduct a service. In 1855, on his next visit, the Bishop recorded: "I then proceeded to Captain Sinclair's, where Divine Service is now held, and who had prepared dinner for us". The story has long persisted that the Bishop actually held services in the little barn, or stables, on the north side of the house, but there does not seem to be documentary evidence for this. This barn was, however, definitely used for church services after mid-1875, which was when the small wooden St. Peter's Chapel, built on the hillside where the stone Church of St. Peter now stands, was blown down in a gale. The barn also served as a school towards the end of the last century and early in this one.

In May 1854 Johan Frederik Victorin, the young Swedish naturalist who spent several months in the Knysna/Plettenberg Bay area collecting specimens, described the already-old house thus: "The dwelling-house is situated only a few hundred alnar from the beach, so that you hear the rather overwhelming thunder of the breakers." The noise of the surf is still, of course, a background to all activities in the house.

After Sinclair's death, the Government bought this house for £1000, but was able to let it for only £80 a year. In 1869 Bishop Gray, on behalf of the Church, bought it together with 18 acres of land along the foreshore, commanding access to the landing ground, for a mere £220_17. "The property will even yet, I trust, become valuable to the Church", wrote Bishop Gray. "At all events it offers an excellent residence for our Missionary."

From this date onwards it was known as The Parsonage or The Rectory. A long succession of gentlemen of the cloth, supporting their families on stipends of £100 a year or less, were to call this building "home" for the next 70 years. The Rev. Edwin Gibbs occupied it briefly with his wife and children and then on a more permanent basis from 1870 until his death in 1891. It was during his tenancy that we find the first reference to the fact that the thatched roof badly needed repair.

Bishop West Jones, successor to Bishop Gray, stayed with the Gibbs family when he came to consecrate St. Peter's Church on 14 August 1881 and here suffered a mishap. He ventured up a ladder to examine one of the gables of the house and suffered a fall, hurting himself so badly that he was not able to consecrate the Church of St. Michael's and All Angels at The Crags the following day.

The Bishop promised on this occasion to pay half the cost of re-roofing the house with corrugated iron, as the thatch was badly rotted and was leaking seriously. At the same time as the roof was repaired in 1887, the courtyard between the two sections of the house was roofed over and the long building on a continuous plan, the one seen today, emerged. A passage runs the full-length of the building from east to west, with the rooms running off it on the south side.

After Gibbs's death, the Rectory was occupied by the curate, William Breach (who was never ordained) and his large family until his death in June 1909. For the following decade the Rev. W. Gratton Sharples was the occupant. It was during his tenancy, in October 1913, that the famous author, Pauline Smith, and her aunt stayed in the Rectory. Miss Smith left a detailed description of the house, the approach to it down a precipitous hill, the garden, the furniture and the built-in features. Of the working quarters she wrote: "The kitchen has no stove but a fireplace about four yards wide and two deep, and about two feet raised, making it a sort of platform. In the middle of this two big stones across which are two flat iron bars under which the fire is made.'' The opening of this fireplace is still to be seen, although a coal stove now fills it.

Old Rectory Plettenberg Bay - Door in the east wall of the House.png 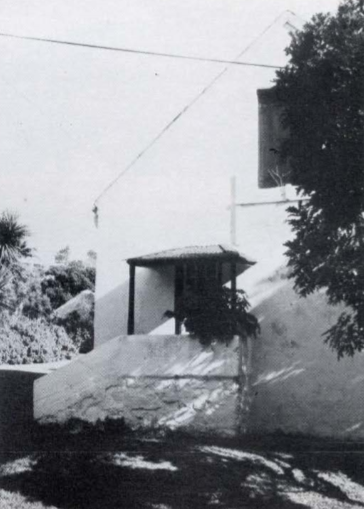 The door in the east wall of the house, thought to have been the original main entrance

From the time that the present-day Rectory, near to the church was built in 1939, the historic building below became known as the Old Rectory. The present owner has called the whole property (part of which has recently been sold for town-house development) "Van Plettenberg Park" but the name "Old Rectory" lingers on. The Anglican Church sold the building with several acres of land in 1940 (some of the 18 acres bought by Bishop Gray in 1869 had already been sold off). The purchaser, Mr Fletcher, owned it briefly, until the late Mr Robert John Crawford Brunt became interested in the building. He began negotiations to purchase it in 1942 but the deed of transfer was not registered until the 16th September 1946. In the almost 40 years she has occupied the house, Mrs Crawford Brunt has made only one structural alteration (knocking out a section of the passage wall to increase the size of the sitting-room) but has covered the rotting yellowwood ceilings and floors, repaired broken sections of the 60 cm walls and generally done valuable work in keeping the two-centuries-old building in good repair. In 1981 Mrs E. Crawford Brunt sold 1,8 hectared of the land to Rengus Development Corporation. The steadily-increasing section of our populace which is interested in conserving buildings of historic importance such as this one, will surely take steps to ensure that this house with its fascinating history is not lost to the nation.