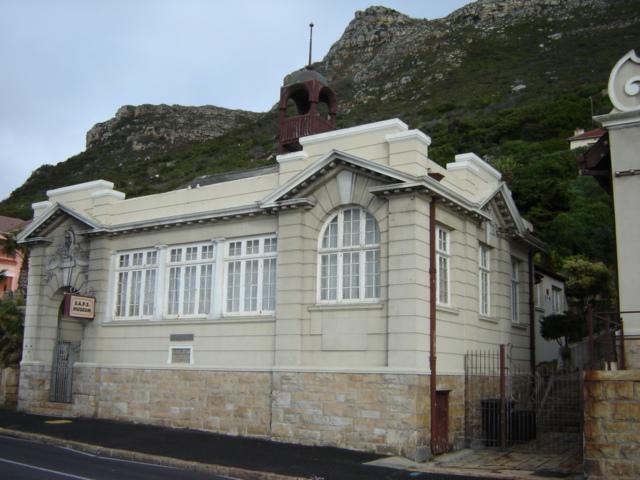 [Originally published in 2014] Andrew Carnegie, an American philanthropist, wrote an article proclaiming “The Gospel of Wealth” and urged the wealthy to improve society. When he made the offer of a Library, Muizenberg, like many other villages, took advantage of his generosity. In 1910, The Carnegie Library replaced the first library in the Municipal offices.

The Carnegie Library was erected between the bungalow, ‘The Fort’, and the Post Office along Main Road, on the site of the Toll booth. The road to Simonstown (Main road) was a toll road administered by the VOC (incorrectly named Dutch East Indies Company). 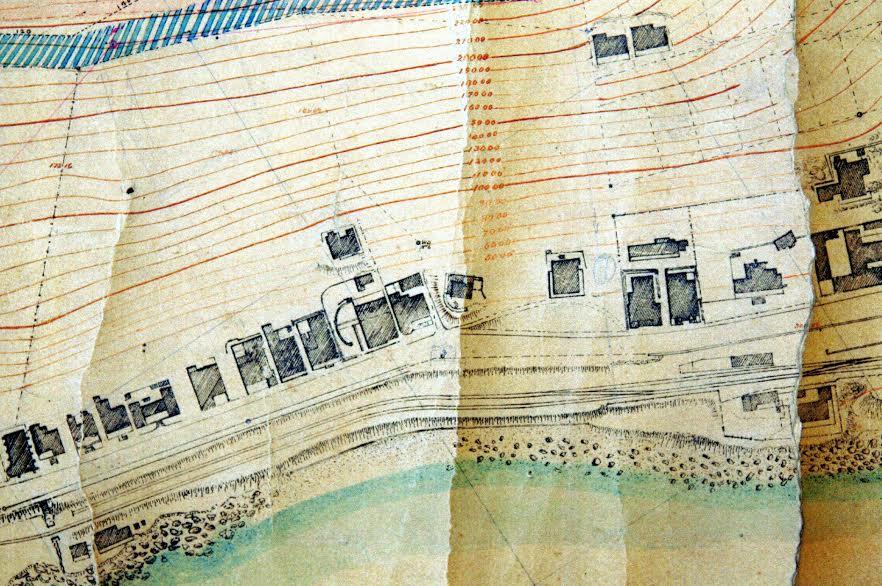 When the Carnegie Library became inadequate the books etc. were re-housed in the ex-Fire Station in Atlantic Road, which in turn had moved to a modern Fire Station in Main Road, Lakeside.

Coincidentally a member of the then SA Police, had been reconnoitering for a suitable site for a Cape Province, SA Police museum. He found the Carnegie Library building available with all of the requirements he was looking for. It had been used as a charge office so he approached the Dept. of Public Works and Land Affairs. The erf had previously been used by the Police (1898) and as it was being used by ‘Bosslapers’, they decided to re-utilise the property.

The South African Police Cultural History Museum, with the incorporation of the Post Office became a complex representing both the S A Police and the Department of Justice. Instructions from Pretoria to the effect that the Carnegie Library and Post Office were to become a museum in September 1986. Part of the ‘deal’ was that the Police would maintain the grounds of ‘de Posthuys’ as well as their own. 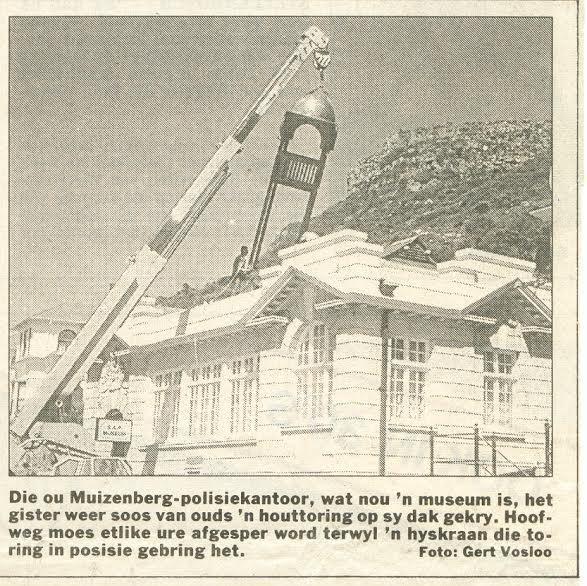 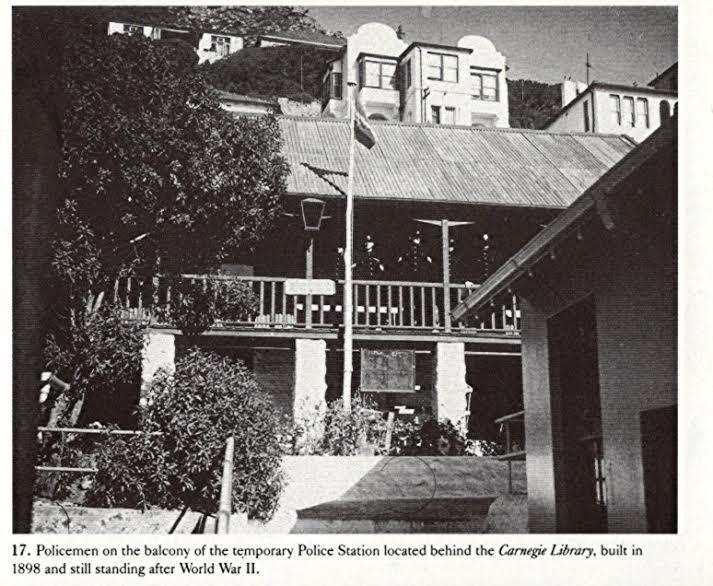 The complex due to lack of maintenance started looking rather sad and after much negotiation it was decided to give the buildings a coat of paint but alas 2010 (World Cup) with all the demands put on the Dept. of Public Works it was again postponed but local interest groups persistently kept the dialog alive and work was started in 2013 on the now S A Police Services Museum.

The architects were Holm Jordan, Renier Visser, and the Dept. Public Works. The main contractor was Bambana.

The Post Office building in the previous museum complex represented a courtroom and particularly visiting schools could role-play at experiencing the Justice system at work. The lighting, air-conditioning and finishes are of the finest quality. The new toilet suite has the latest plumbing and furniture with attractive vanity slabs and where possible the existing doors/frames etc. were refurbished. The sash cord sliding windows and shutters were replaced. The ceiling was removed and the old Pine trusses were exposed and the lighting is provided by large pendant low energy lamp fittings.

The floors were sanded and sealed and the standard PWD two-tone green walls were painted in modern subdued high quality finishes. Down a flight of stairs are the old cells and the old graffiti walls have been covered with glass to maintain the prison culture. The outside security gate (to keep criminals out) was painted with serviceable charcoal colour epoxy paint. The buildings along Main are less than 100m from the sea (False Bay) and corrosion is a major problem. Before someone presumes it was extravagant.

There was previously no wheel chair access but a new stainless steel state-of-the-art elevator was installed. The Carnegie Library and Post Office were simply linked by a sloping concrete path with several steep hand-cut sandstone steps. However the link has been made accessible with a roof and tempered glass sides and double glass doors for ambulatory visitors. 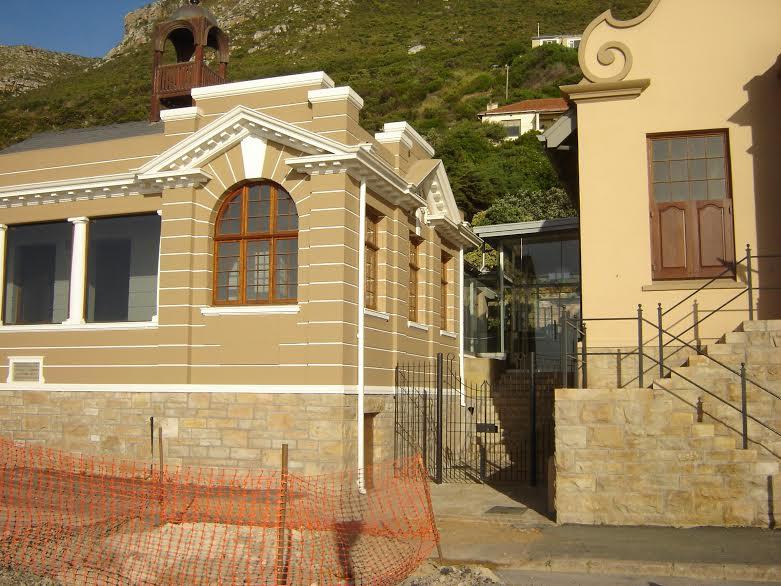 The Carnegie Library grew and on careful examination it will be noticed the original stoep was enclosed with glass to provide more internal space, this feature has been maintained. The Carnegie Library building was previously filled with appropriate displays and cabinets. One of which was a stable. The story goes that the last horse, ‘Chester’, was ridden to the Taxidermist and returned to his new stable. There is now, no place for Chester. 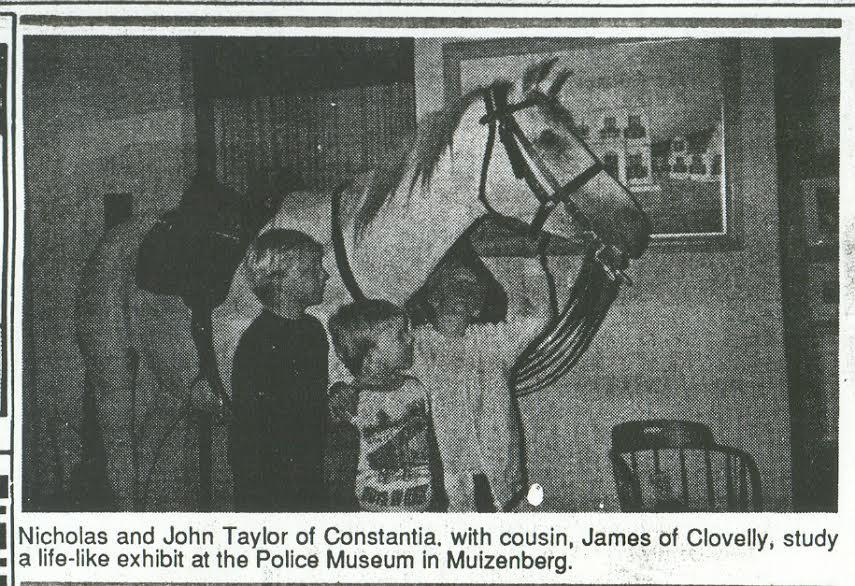 The renovations were started and beneath the old floor was a grisly find, human remains. SAHRA was informed and one of the team that renovated de Posthuys, the adjoining building, Dr Ute Seemann and her team attended to the detail. A suitable black foot stone was installed as a token of respect.

The renovated Carnegie Library also has state-of-the-art display cabinets and a well equipped catering area with shutters which close off the area. There is new office space, furniture and the controls for the ultra modern fire and security systems.

The original chequered marble patterned entrance was cleaned and is as good as new.

We wish the S A Police Museum the best of luck under the command of Henry Jones (Captain). This is a success story, one for the good guys! 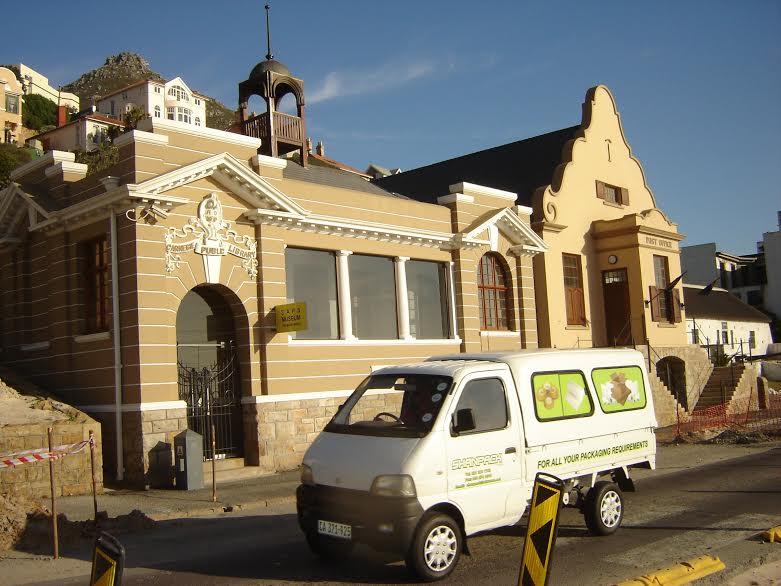 Photograph taken during the renovations