The Preservation of Diagonal Street 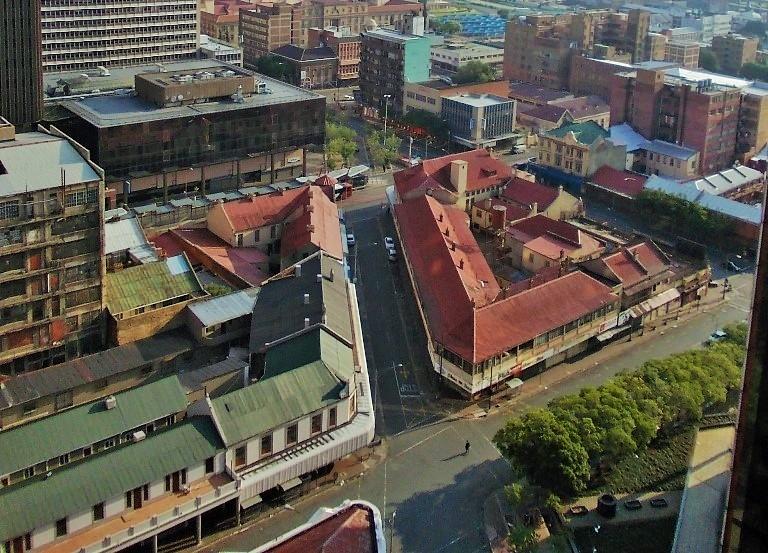 Diagonal Street is one of Johannesburg's iconic streets with an energy hard to find anywhere else. It is difficult to imagine a time when its very existence was threatened. The following compilation of sources provides an overview of the preservation of Johannesburg's most famous street scene. The details appeared in a survey conducted by Johann and Catharina Bruwer in the early 2000s. Thank you to the City of Johannesburg for giving us permission to publish. 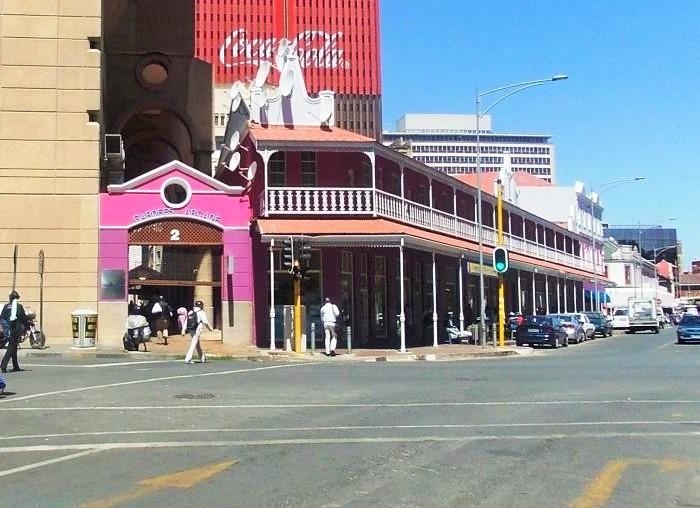 A section of Diagonal Street (The Heritage Portal)

In The Star (“JCI plans to demolish Indian shops”), of 18 March 1987, it was reported that the Johannesburg City Council’s planning department had been approached by Johannesburg Consolidated Investments (JCI) with a view to the proposed demolition of the city’s most famous street scene. “The Victorian shops on Diagonal Street between Pritchard and President Streets, with their balconies, filigree iron work and the colourful Cairo-style fruit market date back to 1896. The street was recently renovated and fitted with Victorian streetlamps by Anglo American at a cost of R800 000. The public is unlikely to take the news sitting down. The shopkeepers, whose shops are a tourist attraction, were appalled when they heard the news yesterday.” It was reported that the Argus company had sold its Diagonal Street property behind The Star building to JCI for R3,7 million. “The block of flats and line of shops opposite the glass tower of Barnib House will be demolished and JCI will build an office block on the site, subject to planning permission being granted.” 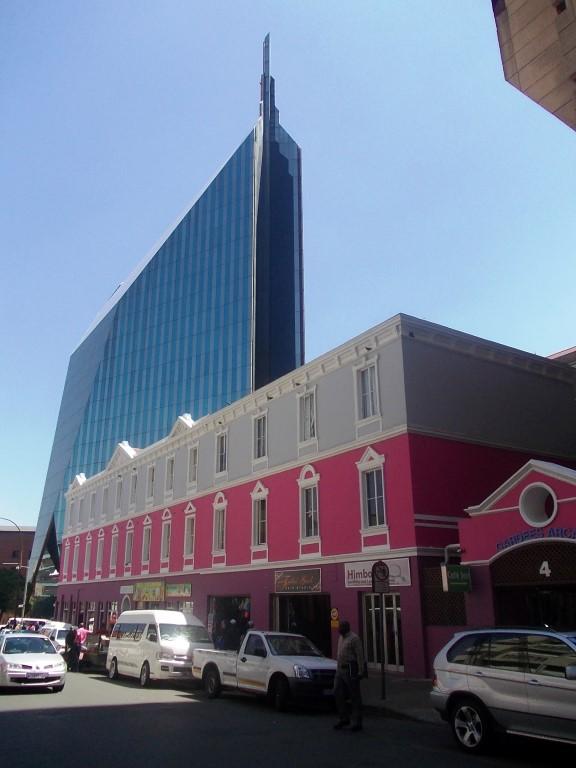 This was followed by a report in The Star of 21 March 1987 (“Battle for Diagonal Street ‘national monument’ looms: Traders to fight back”) from which it became clear that JCI was to meet serious opposition: “Indian market traders in Johannesburg’s Diagonal Street have united in a bid to frustrate efforts to force them out the shops they have run for more than half a century. The 40 tenants in the mainly fruit and vegetable market have appointed attorneys to investigate ways of preventing Johannesburg Consolidated Investments from putting up an office block on the site. “Shop premises on Diagonal Street were recently renovated by Anglo American at a cost of R800 000. The shops became a tourist attraction in their setting opposite the blue glass Barnib House, one of the most avant garde buildings in the city.” 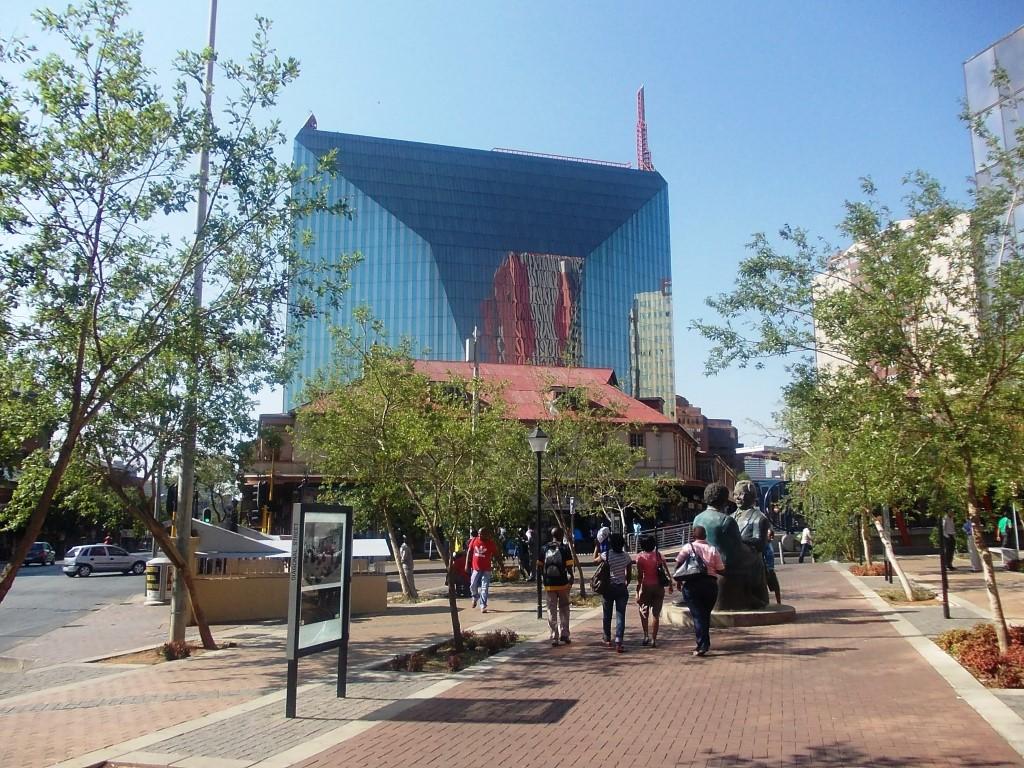 In The Star (dd. 26 March 1987) in the ‘Letters To The Editor Column’, various members of the public objected to the plans by JCI. Rob Allington stated as follows: “Every civic-minded individual and organisation recognises (the Diagonal Street area) to be an irreplaceable national treasure historically and architecturally. JCI blandly asserts that ‘any new building which takes the place of the old property can only be for the better’. Better for whom? This brings to mind the similar case of ‘betterment’ which resulted in the end of the Colloseum.” J.G. Collett also objected vehemently to the proposed new JCI development: “Diagonal Street is an important part of our city. It is as much part of this country as we are. I saw the street for the first time four years ago and have loved it ever since. It has the spirit that only street scenes here could have – vibrant coloured clothes hanging around doors and fruit and vegetables.”

Then on 30 March 1987, it was reported in The Star that Johannesburg’s oldest street scene would not be demolished after all! “The developers of the site which extends across all seven stands behind The Star …have decided to develop only the area behind the shops. Even the alleyway market will be spared. The decaying interiors will be restored.” 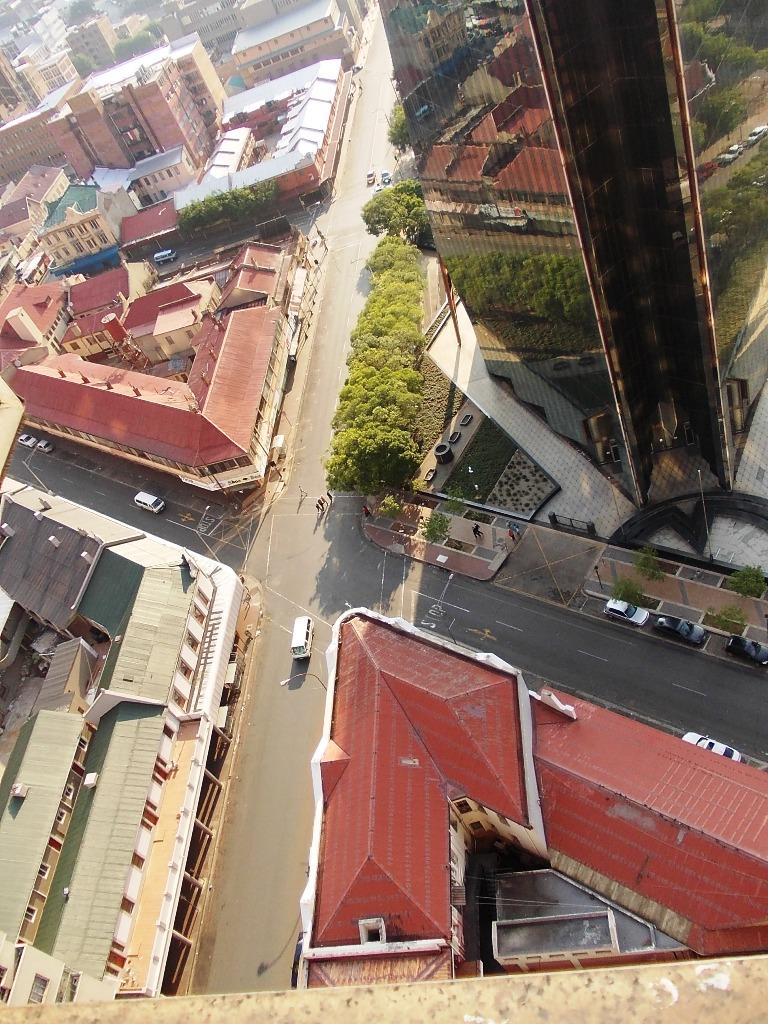 An interesting angle looking down on Diagonal Street (The Heritage Portal)

The Star of 31 March 1987 (“Diagonal Street lesson”), it was consequently reported that conservation had won the day: “Diagonal Street is all sorts of things to Johannesburg: it has, for a start, the only surviving Victorian street scene in town and the area uniquely spans the whole architectural and human cultural mix of this city. Yet we nearly lost its last surviving 19th century remnant. But for an official who discovered he was obliged to inform the National Monuments Council (because the buildings were more than 50 years old) the last intact block of Diagonal Street might well have been demolished before the public could react.”

By this stage, detailed discussions were taking place between the developer (i.e. Johannesburg Consolidated Investment – JCI) and the NMC. The latter eventually indicated that the two buildings on Diagonal Street (i.e. the Nathanson’s Building and the Carmel Building) needed to be retained but agreed to the re-positioning of the adjacent Fruit Arcade. The NMC had also been approached by a number of tenants who had lived in this area for many years. “They seemed to be a settled community, small traders totally dependent on their daily trade in the small shops.” The NMC agreed to the demolition of the eastern building, alongside The Star Building. “The intrinsic merit of the buildings is therefore not great. It is the shopping character and the relationship to President and Kort Streets and the rest of Diagonal Street that makes this exceptionally valuable.” (Flo Bird, NMC April 1987)

In a letter dd. 17 September 1987 to the NMC’s Chairman, Mrs Flo Bird explained the NMC’s position as follows: “The final proposal is that the two most important buildings be retained intact, the fruit arcade be re-erected further west on the same alignment and with additional space to accommodate the tenants from the Thirties building (i.e. on Stand No. 755), and that on the old site of the fruit alley and the Thirties building the new JCI office block be erected.

During construction the Indian shopkeepers will be housed in temporary stalls in Diagonal Street, which the City will close along one side to traffic. Temporary accommodation for the flat dwellers they will find themselves, but JCI will pay R250 per month to each tenant. JCI have now applied for the demolition permit, for the Thirties building and the arcade…”

According to a report in Business Day 21 Feb 1990 (“Diagonal St gets a new face”), Diagonal Street will regain some of its history with the reopening of Gardee’s Arcade and its colourful fruit and vegetable shops. In addition, the Victorian shops and first floor flats on Diagonal Street across from First National House are to be revamped. Work on this project will begin in March. The Mine Employees’ and Mine Officials’ pension funds, which own the new Ernst & Young office building and Gardee’s Arcade, have appointed Ampros to administer both the old and the new space. The arcade, between Pritchard and President street, and the adjacent Ernst & Young House have been developed by JCI Properties and are now nearing completion. JCI will also be responsible for the refurbishment.” 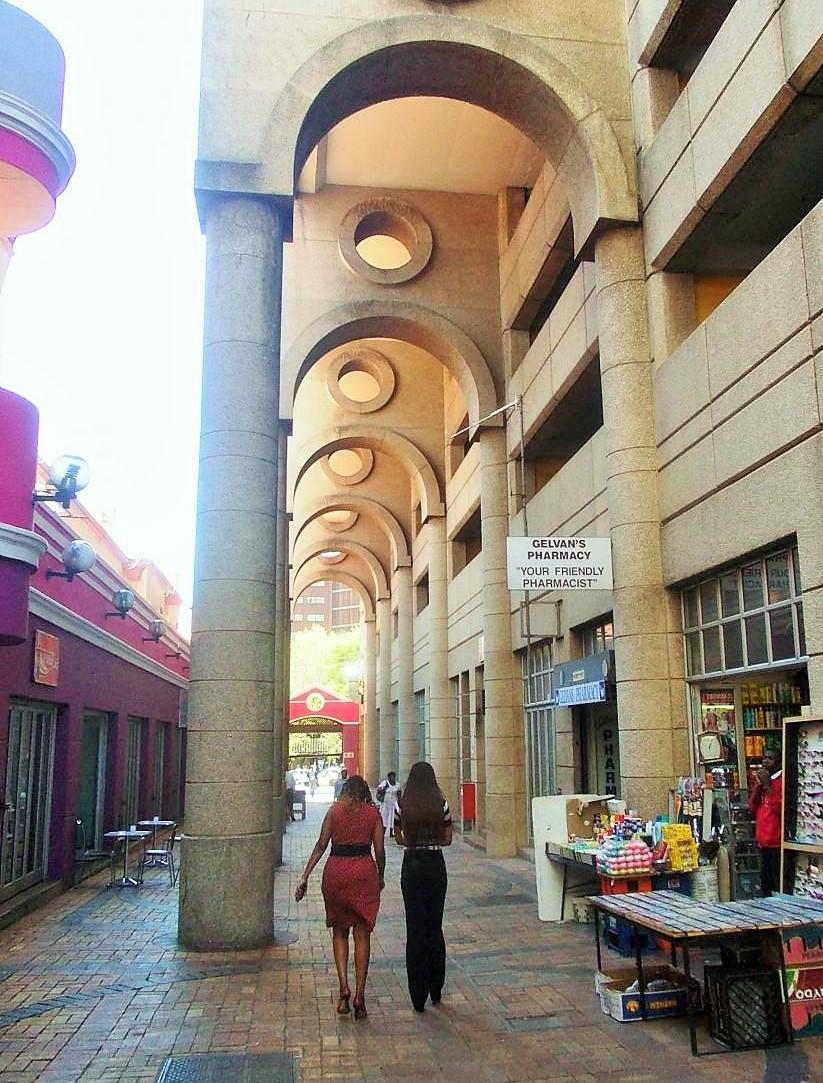 In the Financial Mail of 13 April 1990 (“More Than Skin Deep”), it was reported that work had started on a R1 million programme to upgrade the historic market stalls in Diagonal Street to their ‘original Victorian splendour’. It involved the proposed refurbishment of about 12 shops and a similar number of flats above. The project formed part of a R52 million redevelopment scheme, which was to include the construction of the Ernst & Young House, and the replacement of the fruit stalls in Gardee’s Arcade (on the west side of the new office building) between President and Pritchard Streets.”

According to a report in The Star dd. 15 May 1990 (“Re-development retains traditional Indian trading site”), the “colourful Traders’ Alley”, between Pritchard and President Streets had been given a new lease of life. “The re-development provides for the incorporation of residential accommodation for the Indian families and the restoration of Traders’ Alley to maintain its traditional characteristics of urban scale and flavour. Occupancy by the entire Indian trading community has been retained and one-month leases have been replaced by five year leases.”

In a subsequent letter dd. 10 July 1990 to Mr Murray Hofmeyr, Chairman of JCI, Mrs Bird expressed her satisfaction with what had been achieved: “This is a belated ‘thank you’ for the very enjoyable celebration which marked the opening of Ernst & Young House and of the Traders Alley in May this year. It was a very special occasion in Johannesburg’s ‘coming of age’ when retaining the old was not seen as a stumbling block to progress. I feel that JCI deserves the thanks of all our citizens for having taken on this very complex conservation of buildings, activities and a community…”