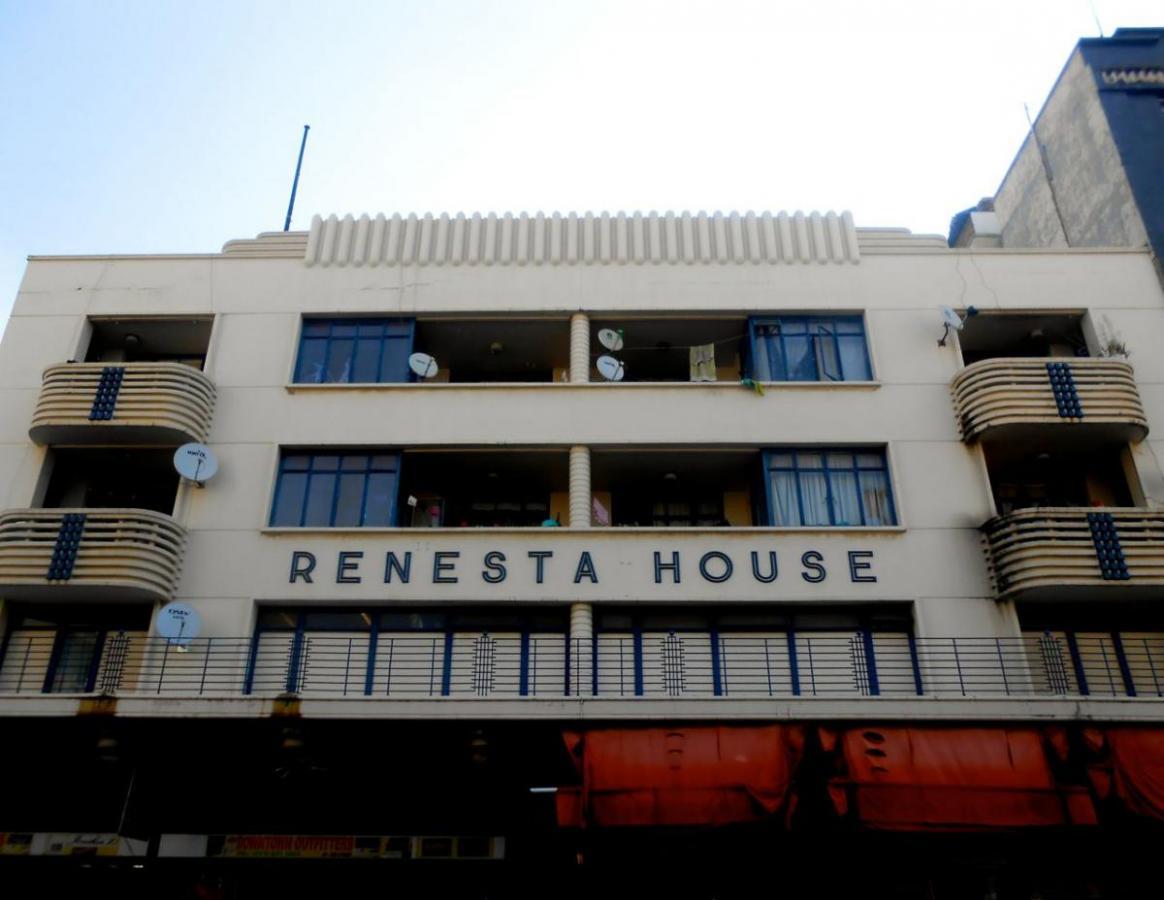 We are honoured to publish this phenomenal article on the priceless Art Deco architecture of Springs. Thank you to the Arts, Culture and Heritage team from the Ekurhuleni Department of Sports, Recreation, Arts and Culture for sending it through. Enjoy!

The City of Springs boasts the largest number of small scale Art Deco design buildings in the world, outside of Miami, Florida USA. The design style, which has become synonymous with the coastal town of Miami, is achieving more and more attention as potential tourism money-spinner for Springs.

The Art Deco design style had its hey-days between World Wars One and Two and achieved its prevalence in Springs, as this was also the period that characterised the greatest growth in the history of the town.

By the mid 1930s Springs was one of the six largest towns in South Africa and was mentioned in the same breath as Johannesburg, Cape Town, Durban and Port Elizabeth. Particularly in the field of architecture, Springs took the lead away from the mining architecture of its origins into an industrial age of opportunity. 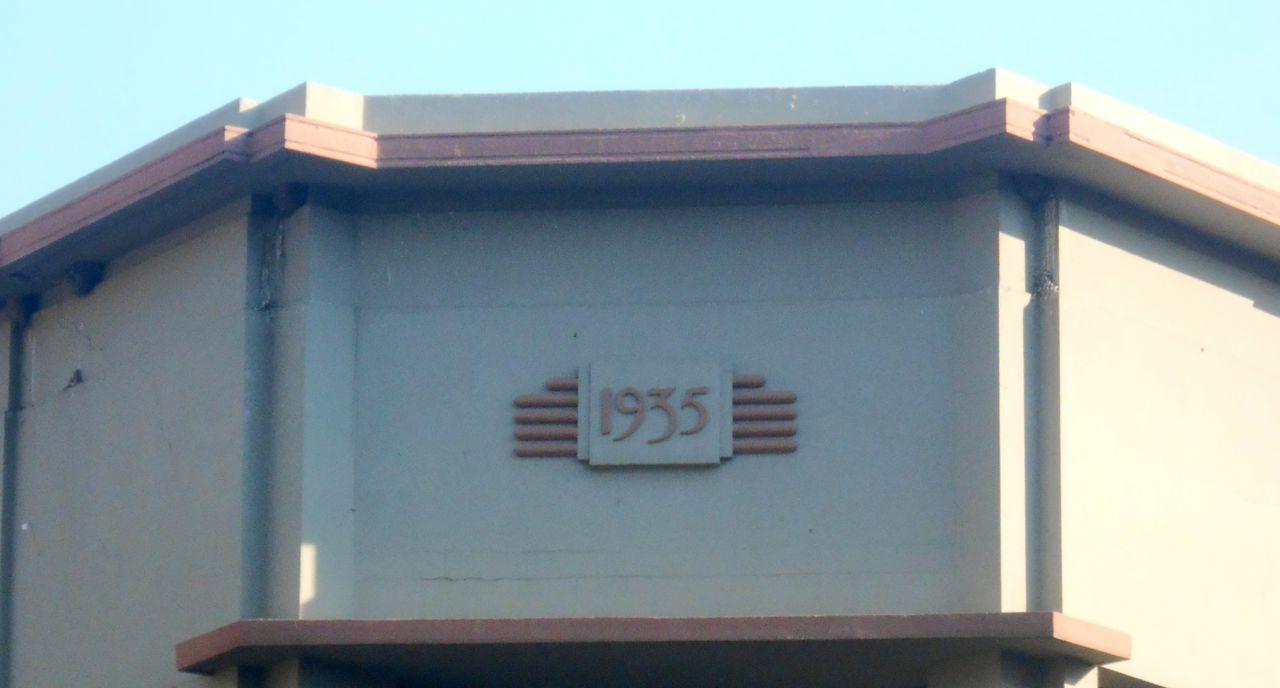 Date on the Coalition Building (The Heritage Portal)

The style centred on designs of mysterious and romantic animals, the sun, fountains and organic motifs while cubists such as Picasso and Braque, futurists such as Severini, Boccini and Marinetti and the surrealism of Dali and Cocteau influenced Art Deco greatly.

In Europe and America, the development of radio, moving pictures, film and theatre, automobiles, ships, steam trains and aeroplanes bore the Art Deco style, while the unearthing of Tutenkamen’s grave in 1921 also impacted on the European and America Art Deco style.

The horror of World War One was followed by an exuberance and renewed energy among the public at large, leading to the development of the Charleston and Swing dances, as well as jazz music. This was also a lead-in period into mass technology and scientific breakthroughs that would forever change the home and workplace.

Aspects of the machine such as the wings of aircraft, the portholes of ships and the wheel were used as inspiration. Although Art Deco is primarily known for its smaller items, it was in architecture that its full potential was realised. 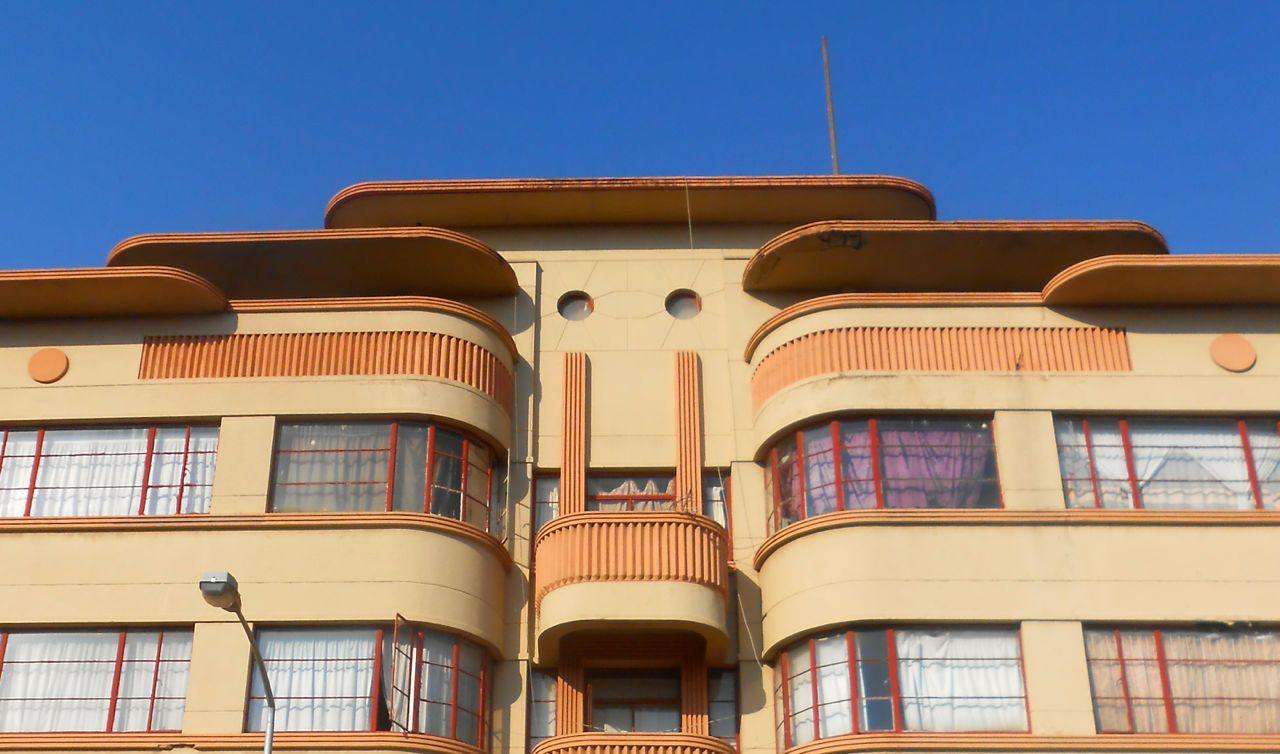 Also in Springs, amid its own phenomenal growth of the gold mining era, Art Deco architecture developed with a character all of its own by combining the elements of streamlined, tropical and industrial Art Deco with the more reserved classical style.

Some of the best examples of Art Deco building style is evident in the Central Fire Station, opened on 13 july 1938 and designed by a Mr Anifantakis. It reminds strongly of the Johnson Wax Building in Winsconsin designed by renowned architect Frank Loyd Wright and was erected in 1936-1939. 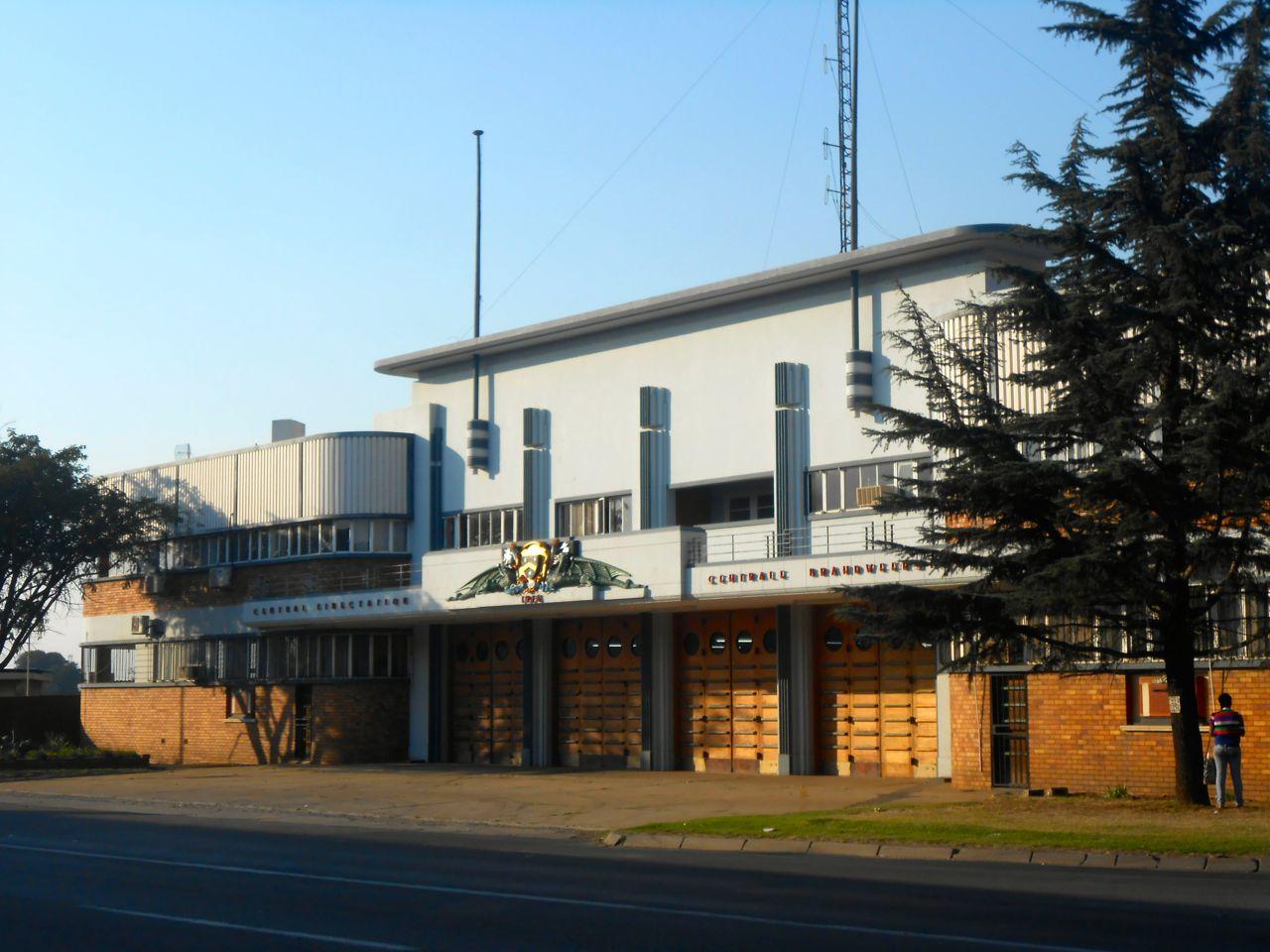 Particularly striking in this building is the use of portholes and curved line. The facade is designed in typical stair fashion to lend dimension and rhythm, while the characteristic “building around corners” style lends a softer appearance, than would the strict use of vertical and horizontal line.

Vertical edging is used on the facade along with small, geometric windows rather than portholes, for practical purposes. The original metal banister of this declared national monument has also been preserved. 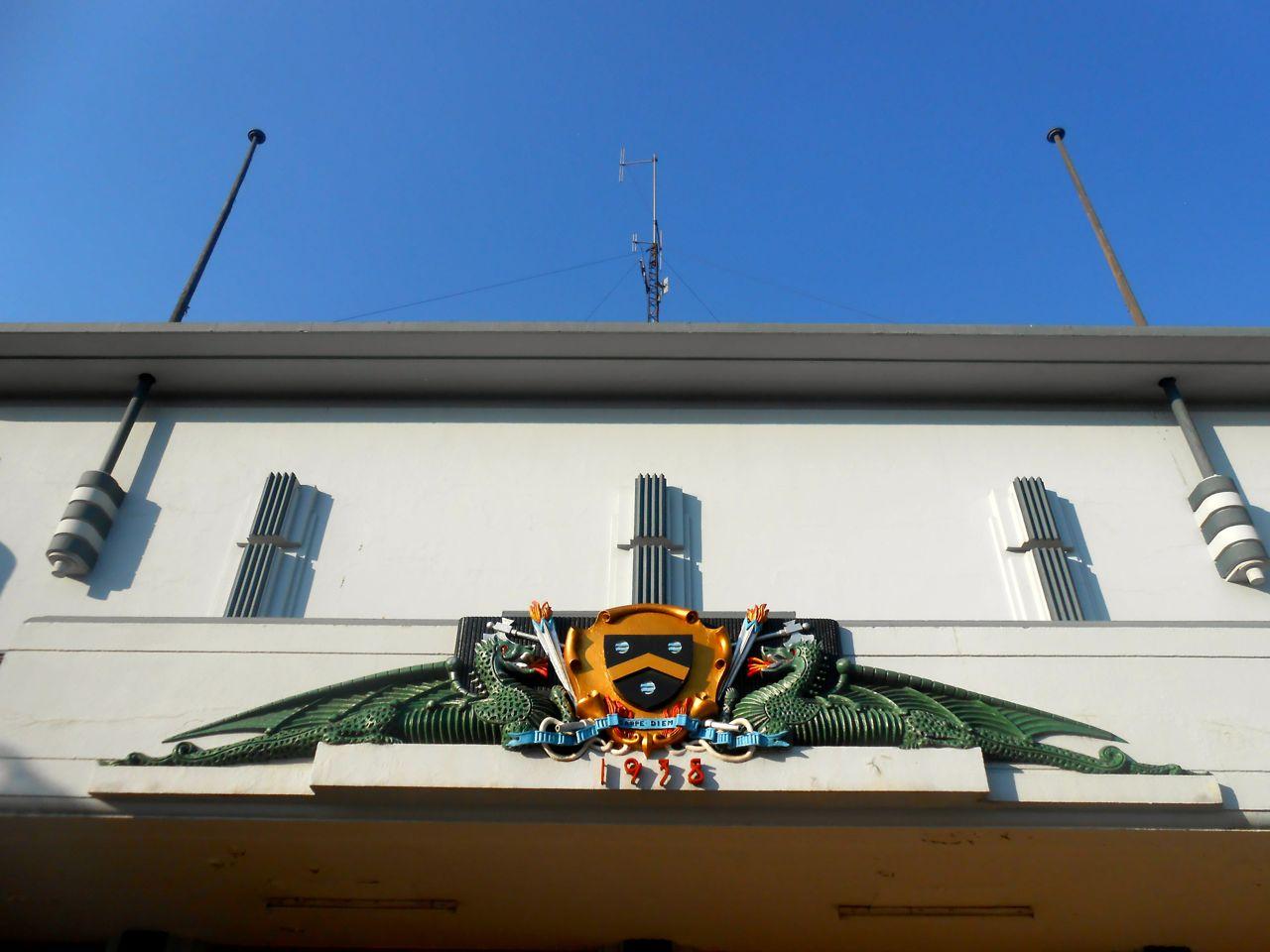 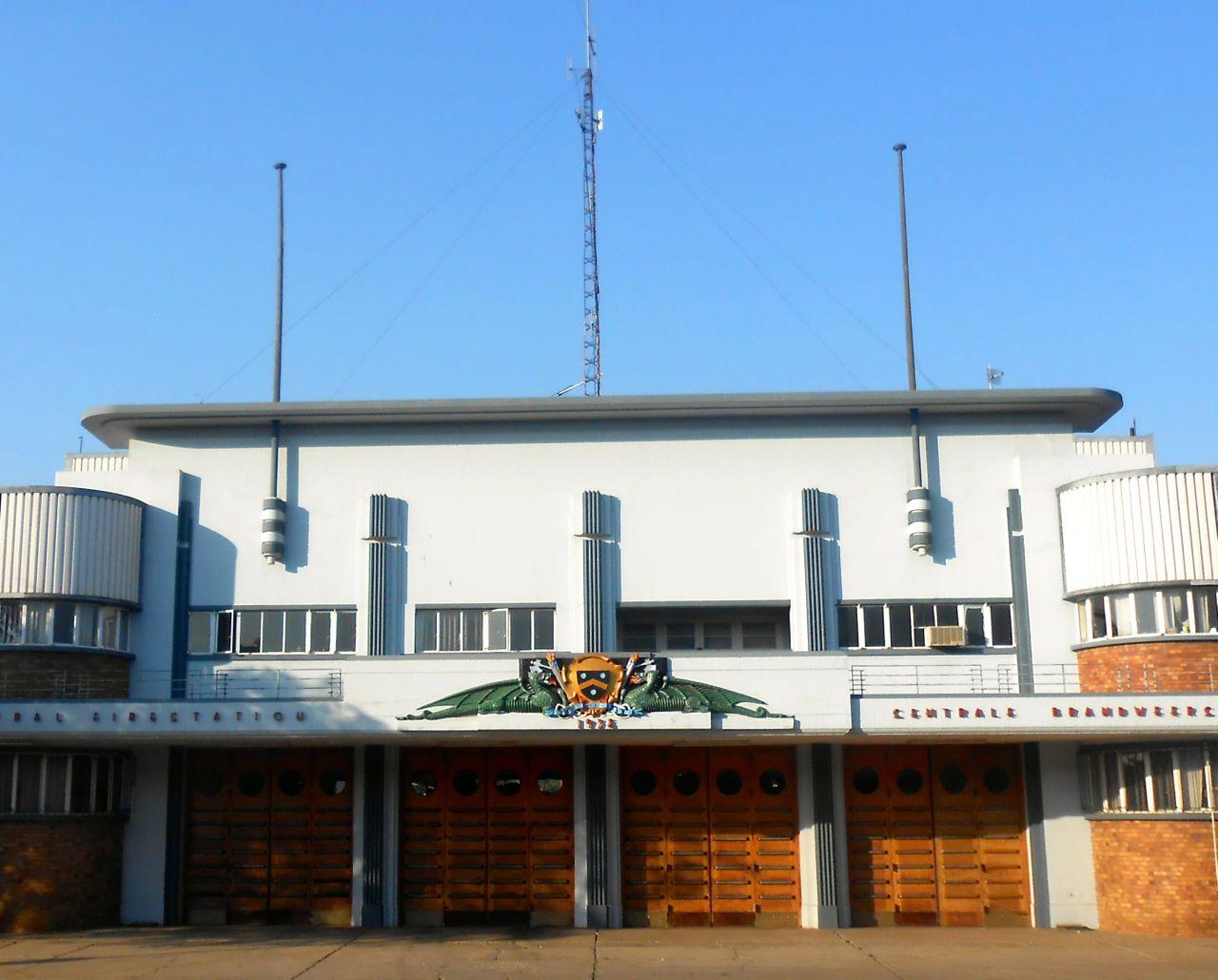 More shots of the Central Firestation (The Heritage Portal)

Parapets and finials were used to advertise Art Deco buildings and the architects often ended the top-most portion of the building with decorative designs to accentuate individuality. 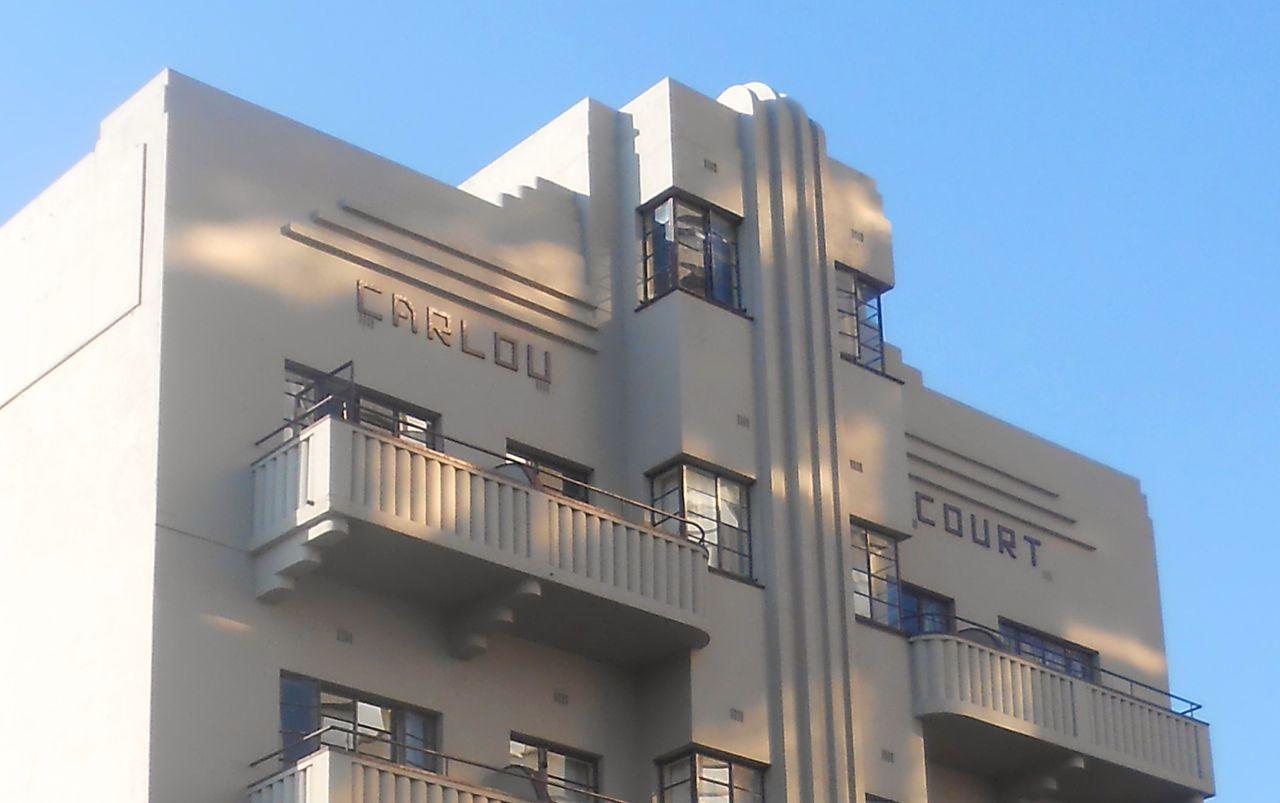 Renesta House was designed by the architects Kallenbach, Furner and Kennedy and is a particularly good example of the use of parapets as well as the use of decorative wall tiles. The entrance still retains the original marble finish and windows in which the geometric and cubist Art Deco designs can clearly be seen. 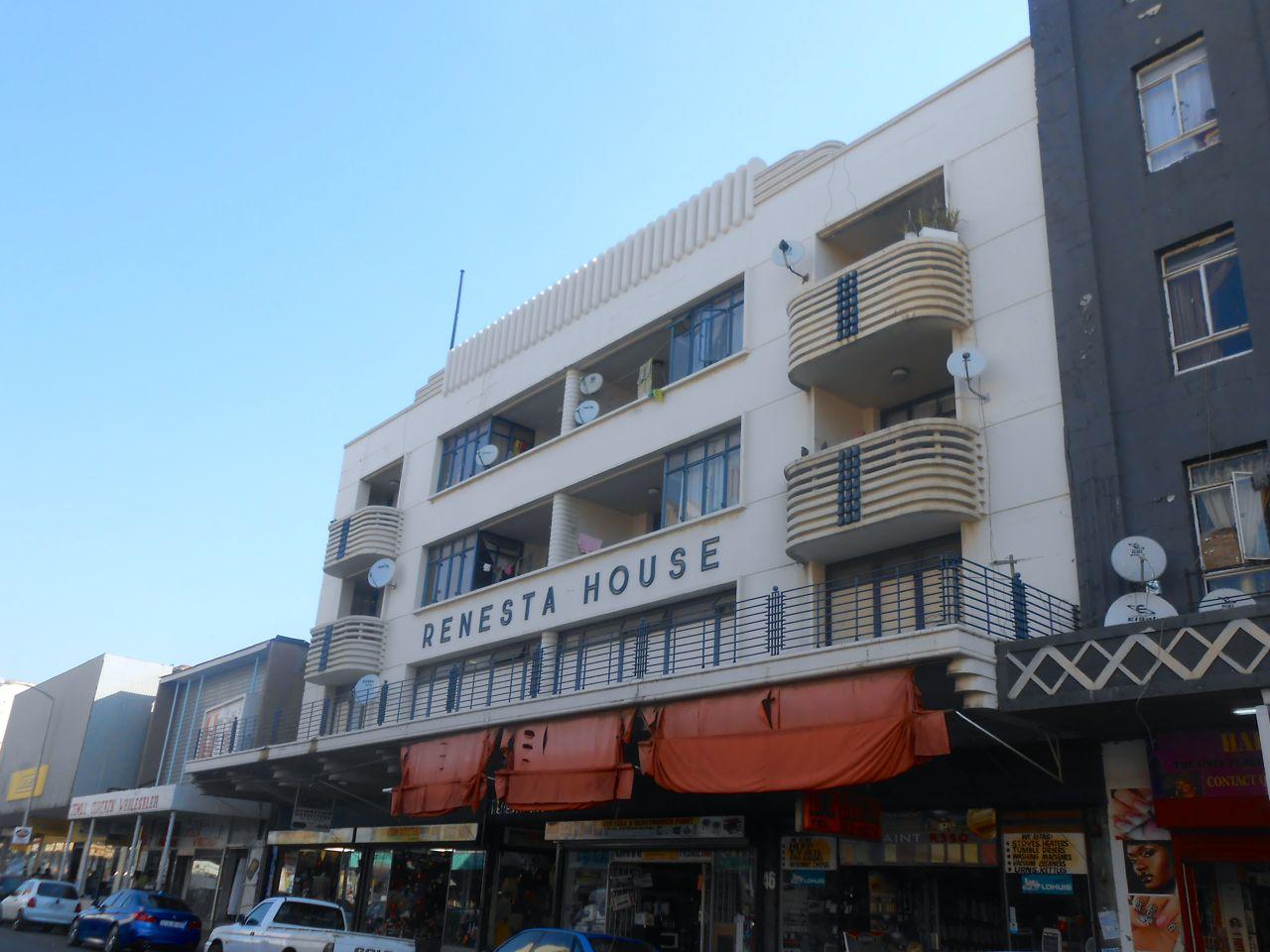 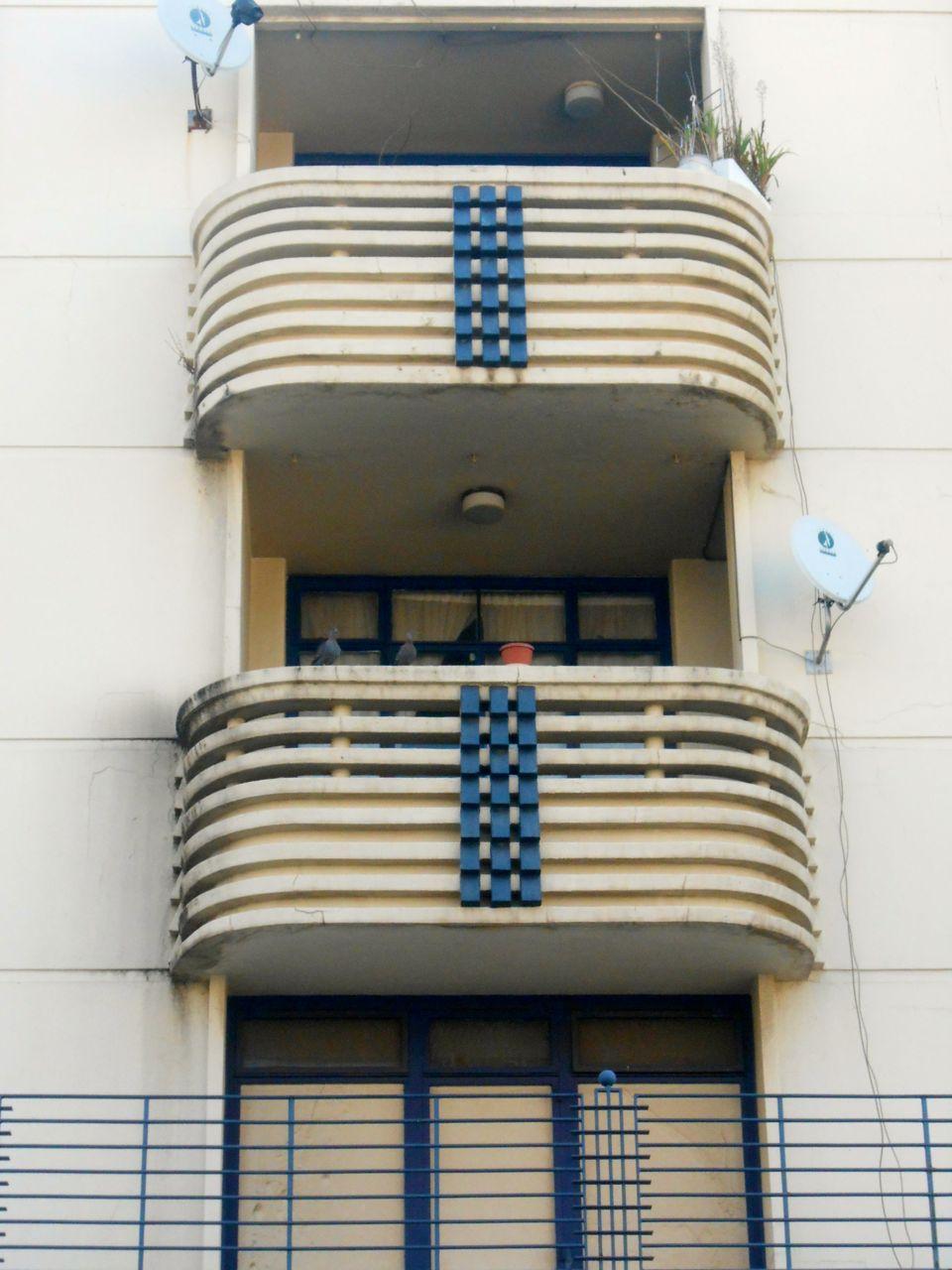 Another element of Art Deco design is the use of decorative cubes, vertical or horizontal banding and streamlining. This was done particularly to draw attention to a certain aspect of the building. This divides the building into different levels lending Art Deco its multi-dimensionality. It is in this aspect, particularly, that the influence of the cubists is evident.

The frozen fountain effect, first seen in Paris, is incorporated beautifully into the facade of the old Casseldale Hotel (now the Selection Lodge). The Casseldale Hotel’s architecture reminds strongly of the Cardoza Hotel in Ocean Drive, Miami. 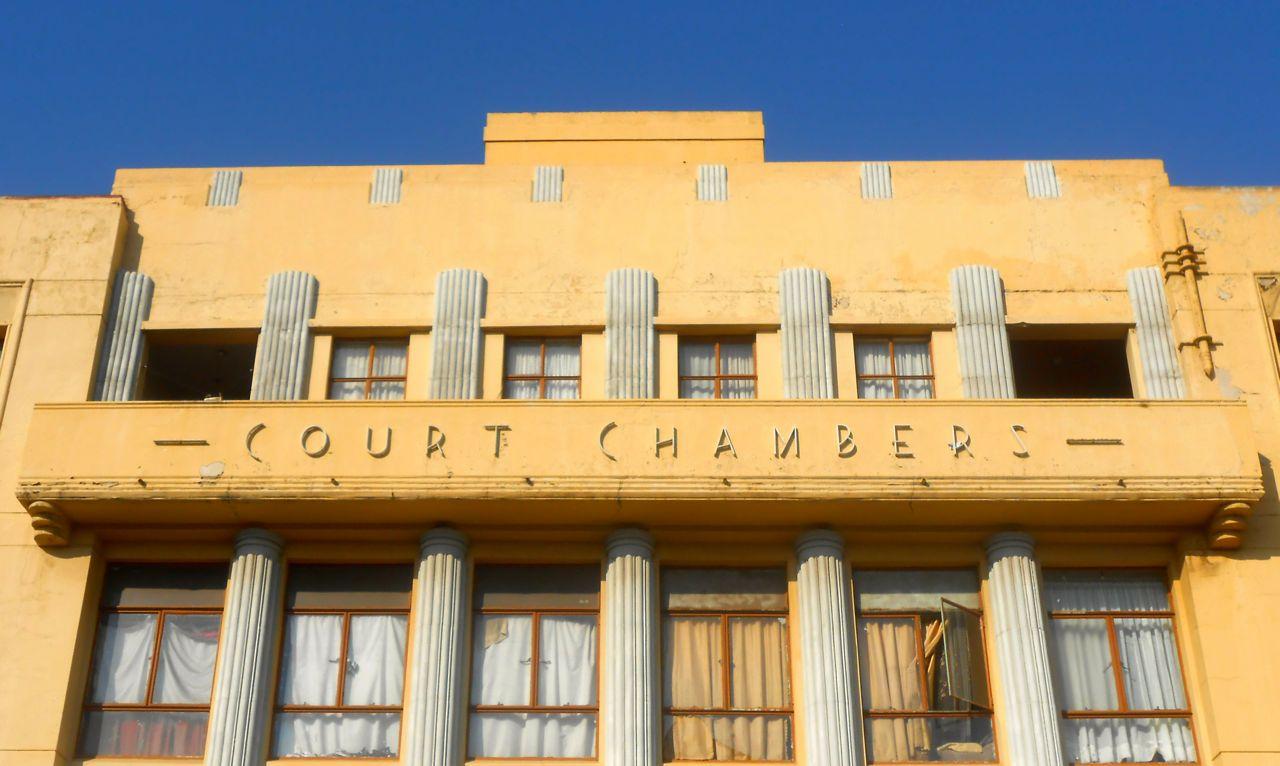 All these buildings were erected to address the accommodation issue in Springs. Functionally the flats, hotels and businesses were dominant in the centre of town. In those days residents did whatever they could to live as close to the centre of town as possible. In today’s times, however, the exact opposite is true. Residents do their best to live in the quieter suburbs. These buildings that played such an important role in the 30s are almost forgotten today.

Another important element of Art Deco buildings was door entrances. Here it was almost as if a special kind of theatrical detail could be seen. The door became a figure-like entrance to the life inside the building. The entrance to the Southern Building in Third Street has marble work with Art Deco lights where circles and vertical lines meet. The lift has mirrors that are also of Art Deco design.

On Springs’s Art Deco buildings architects played around with different types of windows that were used in Europe and America. The Central Fire station has round portholes combined with practical smaller windows. Putting windows all around the building as can be seen on the Springs and Casseldale Hotels, strengthen the Art Deco’s building style. 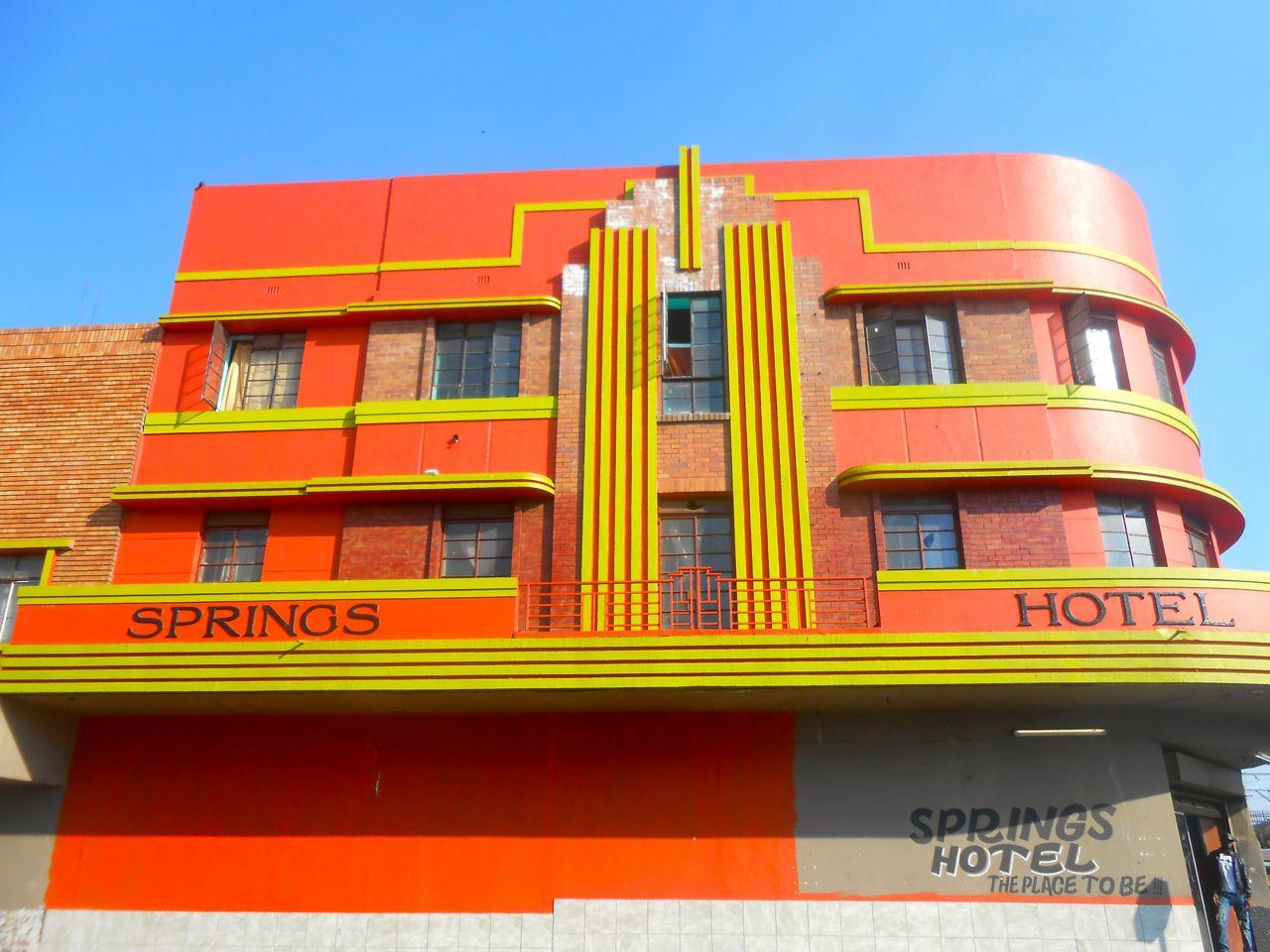 Letter work gave Art Deco a very specific character. Graphic artwork originated in the 20s and 30s and typography became more geometrical and modern and fitted in well with the style of Art Deco. The best examples of this in Springs are the letter work of the Palladium Cinema, Renesta House, Nureef House and the Court Chambers.

The Palladium was built in 1937 and was one of the most luxurious theatres on the East Rand. The cinema industry started to prosper in 1934 due to the gold boom in South Africa’s economy. The Palladium is a contemporary of the Colosseum in Johannesburg, which is surely one of the nicest examples of Art Deco in South Africa.

Two other buildings, Cray’s Mansions and Shimwells are good examples of the South African Art Deco where elements of the Classical and Cape Styles are mixed with elements of Art Deco. This shows how local culture can have physical bearing on external influences in order to create true South African architecture. 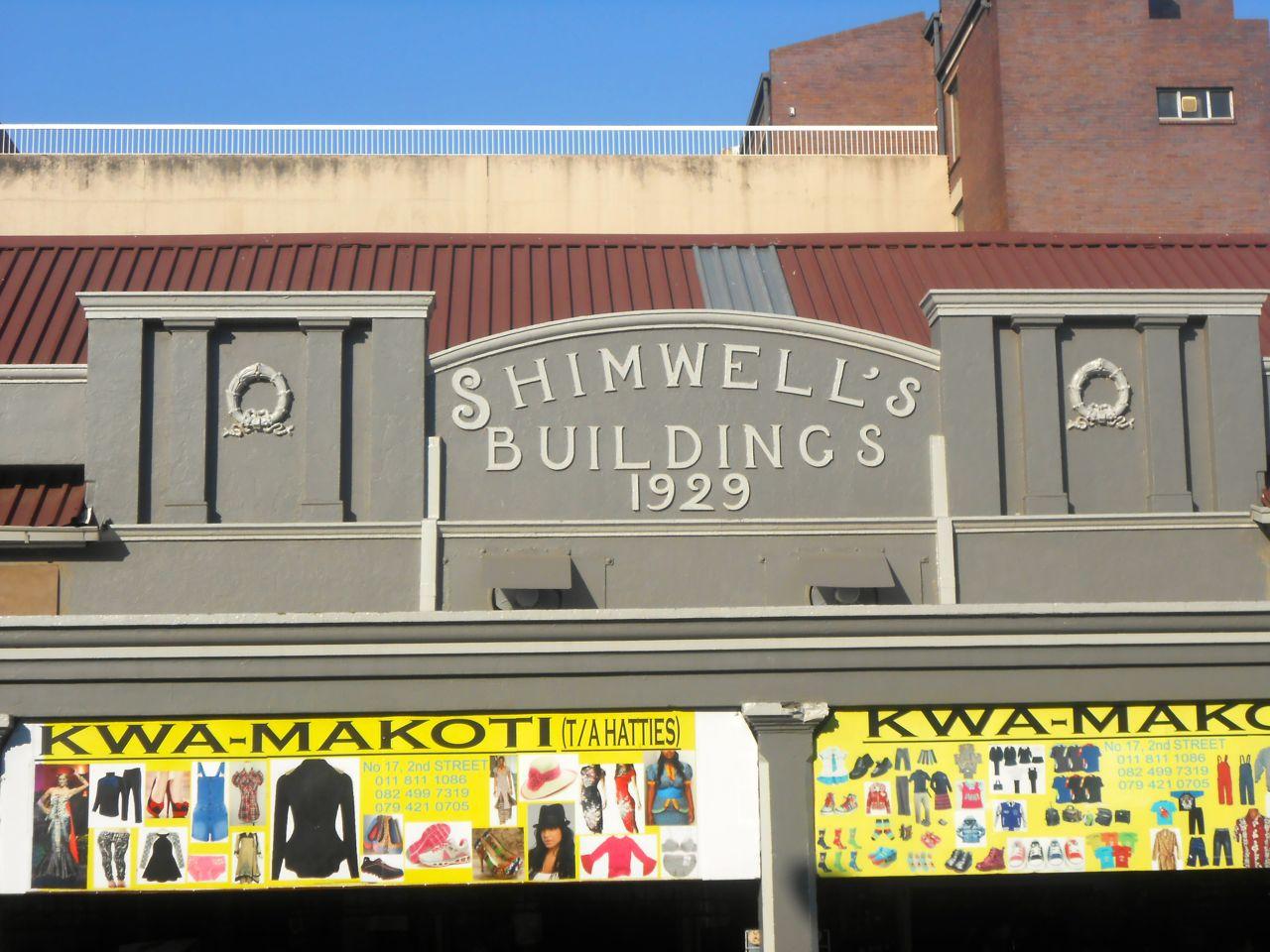 Although Art Deco belongs to the entertainment, machine-era and post depression years in America and Europe, its roots lay in Africa. Springs is then also home to some of the best examples of Art Deco building style in South Africa with immense architectural and historical value – a value the city hopes will soon be recognised internationally!

Thank you again to the Arts, Culture and Heritage team from the Ekurhuleni Department of Sports, Recreation, Arts and Culture for sending it through.