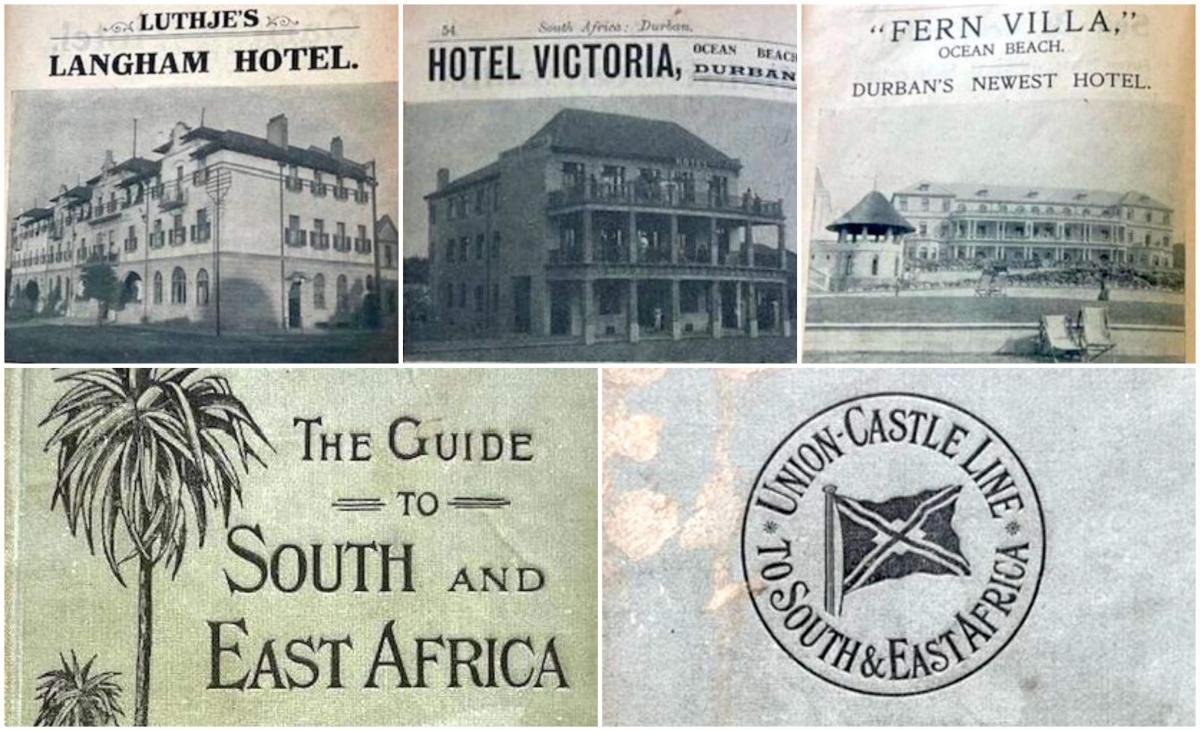 This small but dense guide book to South and East Africa was produced annually for the Union Castle Mail Steamship Company. It was a publishing success. Here was a happy marriage of publishing, tourism promotion and publicity for the sale of bookings for the sea voyage to Africa. For many it was an adventure of a lifetime; for others a ticket to immigration and taking up a new life in what was still seen as a British colony in Africa (South Africa, Rhodesia or Kenya). This was the Lonely Planet or Insight Guide of its day. I love the cover with the decorative palm trees – it is an immediate icon of exotic Africa – a hint of penetrating the 'dark continent' but by 1914 railways had made Africa accessible to the affluent touring class – the men and women of independent means. 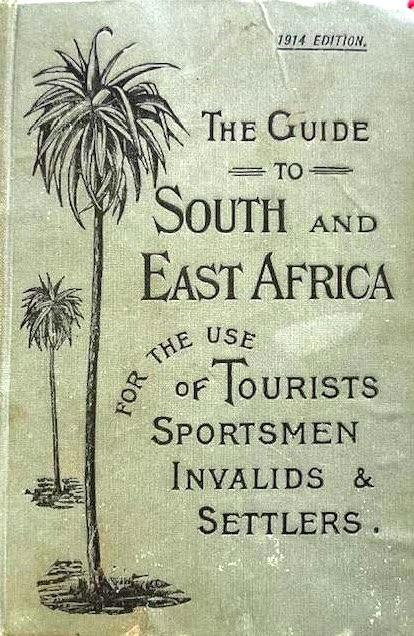 The title said it all - the readership were the tourists planning holidays of up to six months, the sportsmen going in search of hunting wild game, the invalids in search of sunshine and a dry climate to recover from consumption (tuberculosis) and the settlers who were likely to come to purchase a farm or take up a profession in a growing town. South Africa and the hinterland was seen as safe and with a stable government under the new Union government of Louis Botha and Jan Smuts.

I was thrilled to discover this book at the Quagga Bookshop in Kalk Bay during our recent travels. It is now a collector’s item. This particular edition is special because it is the 1914 edition; the year in which the First World War broke out and leisure travel was suspended once Union Castle ships were commandeered by the British government to become troop carriers and U-boat activity of the German enemy made sea voyages riskier. Who would want to go jaunting about in wartime?

Discovering this book on the shelves of Quagga made it an immediate must have. It was an impulsive purchase even at the fairly steep price of R750. That is one of the delights of book hunting... I never know what I shall find. It is in excellent condition with tight binding and all pages in place and most important are the 22 chromolithographed coloured maps to direct and guide your journey. There are 700 pages of  information, maps, curious facts and a mix of the serious and the frivolous.

This guidebook is an instant entry into another world – Southern Africa as it was in the early 20th century – when settlers and travellers needed to be resourceful, enterprising and adventurous. The principal method of transport was the railway and the suggested routes followed the railway lines penetrating Africa. You could venture forth in an automobile but at that date rural roads were likely to be farm tracks. There is so much detail here that I would love to pick a couple of suggested routes and make the comparisons of then and now.

Today this book is more than a curiosity. It is a superb reference source on the principal hotels of the day, average wages of labourers, the cost of living for artisans, how to acquire land, how to fence your new farm, what to expect if you invested in the gold mines, what happens if you discover gold, the expected and sensible attire for hunting and the cost of a hunting trip. It is a very practical book so here are all the prices and costs as they were in 1914. There are comprehensive details about the state of the economy and the principal industries of the day. That is just the tip of the iceberg.

One of the delights of the book are the many adverts – the first one on the inside cover is for Ransome’s ploughs and machinery; another contains all you need to know about a Jeffery ‘s sporting rifle. To survive African exigencies you needed Scotch whiskies, Lazenby’s sauces and canned products, Cross and Blackwell’s supplied pickles, jams and jellies, salad oil and vinegar and Walker & Hall cutlery. Oddly we still have these brands around today but what about Horton’s Ices, Monnery’s outfitters or Bell’s asbestos? The adverts reflect the range of products and perceived needs of the era - stationery, foodstuffs, provisions, newspapers, cigarettes (Wills’ Three Castles and Capstan brands), ginger ale, beers mineral water, a piano for entertainment in the bush, ironstone china and sanitary ware, wrought iron, or even an Oliver Typewriter.

Ransomes Ploughs advert - The Guide to South and East Africa.jpg 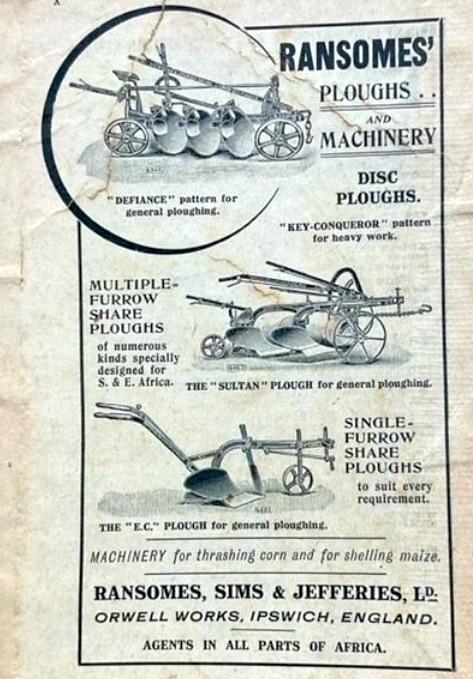 Jeffreys Rifles Advert - The Guide to South and East Africa.jpg 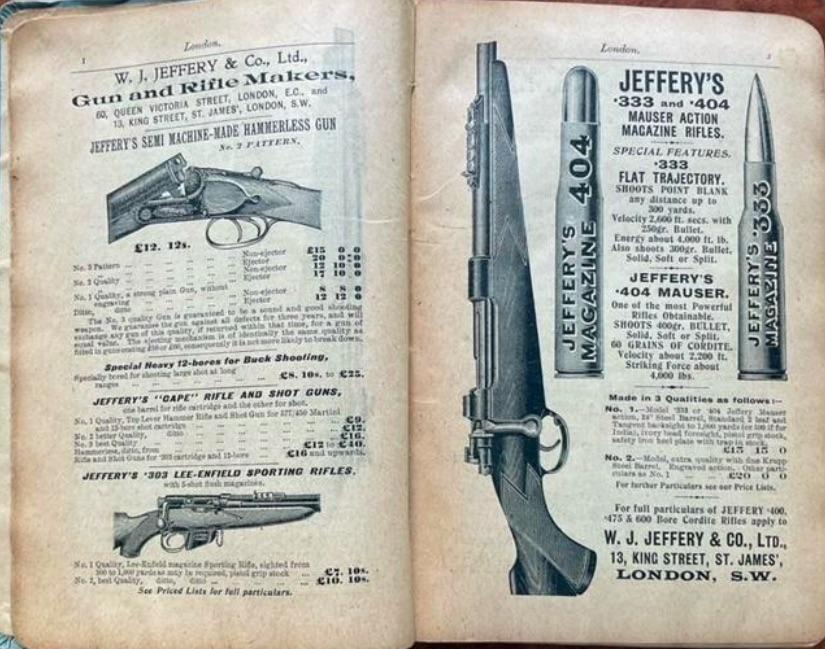 Broadwood Piano Advert - The Guide to South and East Africa.jpg 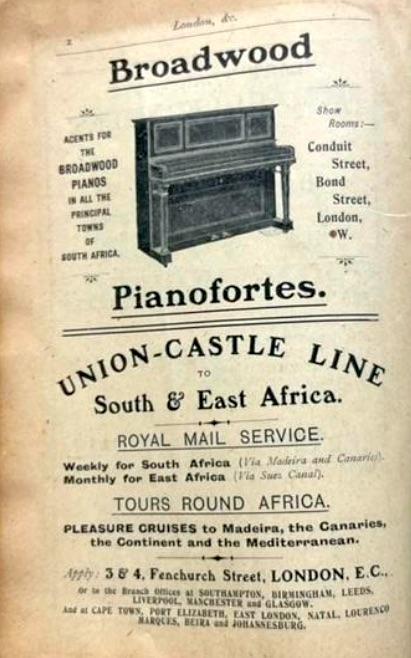 A few of the adverts

Then there are the adverts for the hotels. The Mount Nelson was the premier hotel and owned by the Union Castle line. The tariff for the Mount Nelson in those pre inflation days was fifteen shillings a day including meals. There was also the Hotel Cecil in Newlands, the International Hotel or the City Mansions Residential Hotel. Camps Bay marketed the Marine Hotel and at St James the obvious choice was the St James’ Hotel opposite the railway station or the British Hotel in Simonstown. 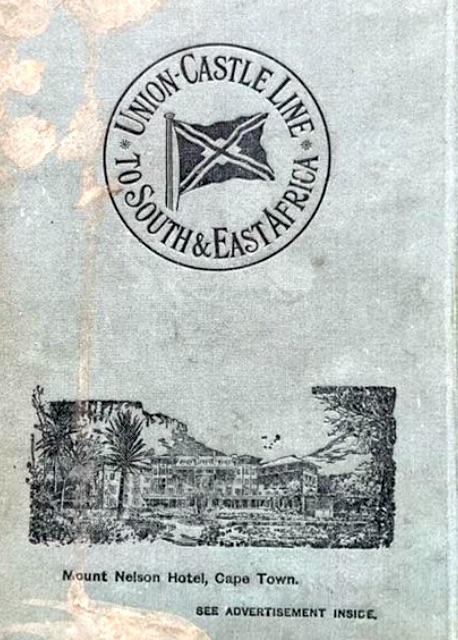 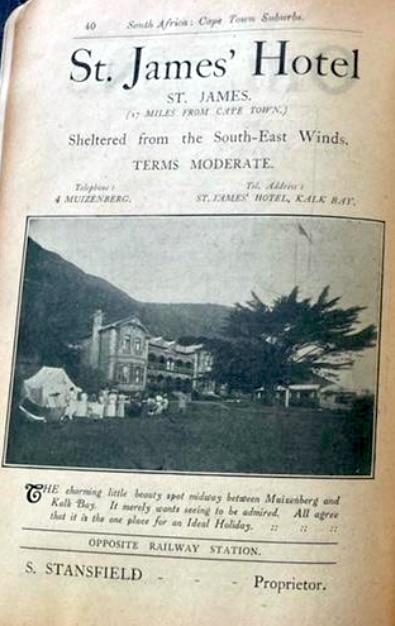 Adverts for the Mount Nelson and St James' Hotel

In Durban there was Hotel Victoria, Palm Court Villa or the Beach Hotel whilst Fern Villa was the newest hotel. The Sea Breeze Hotel had 60 well furnished bedrooms and electric light throughout. In Johannesburg the obvious choices were the Carlton Hotel, Langham or Hotel Norman.

Hotel Victoria and Palm Court - The Guide to South and East Africa.jpg 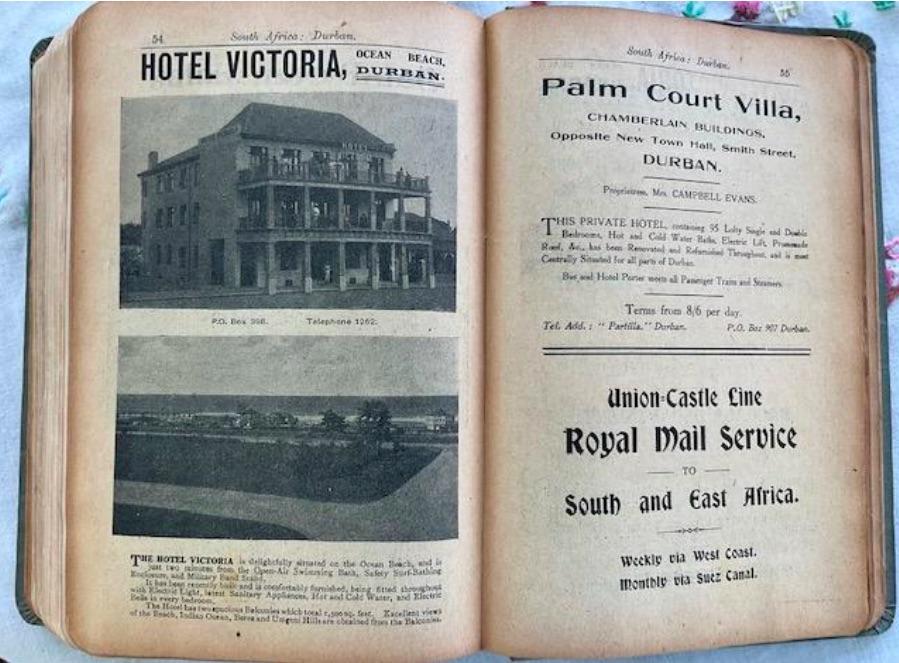 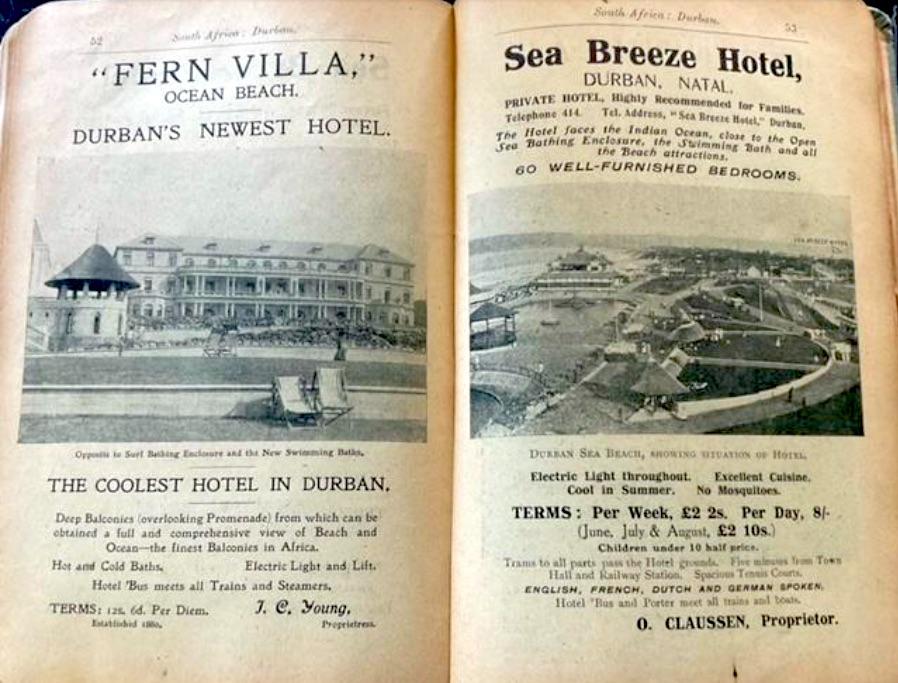 Carlton Hotel and Langhams Hotel Adverts - The Guide to South and East Africa.jpg 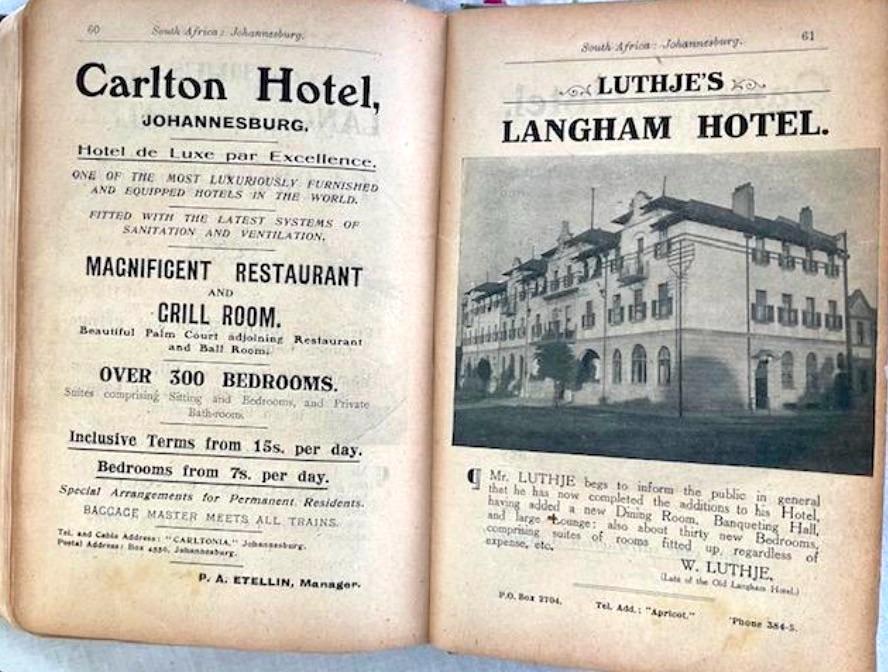 Hotel choices in Durban and Johannesburg

In 1914 South African Railways had emerged as the amalgamation of the pre Union disparate railway systems - the Cape, Natal and Central rail were all combined under the Union Government and William Hoy was the manager. Remarkably SAR offered a 77 day journey of a lifetime from London to the Victoria Falls and back for 85 guineas with a week spent at the Victoria Falls Hotel.

London to Victoria Falls Advert - The Guide to South and East Africa.jpg 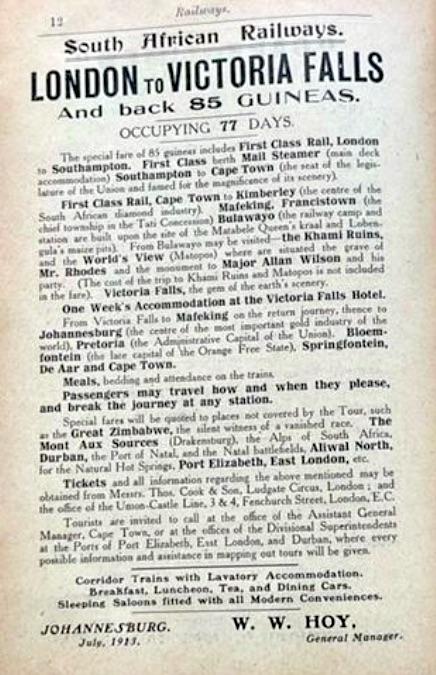 Journey of a lifetime

The maps are the highlight of the volume and in particular the city maps of Cape Town, Johannesburg, Durban and Port Elizabeth. These maps are compact and give a very good idea of the city centres and their green spaces prior to World War 1. Bez Valley Park as we know it today did not exist but the farm of the Bezuidenhout Family still survived as the Bezuidenhout Estate.

Johannesburg Map - The Guide to South and East Africa 1914.jpg 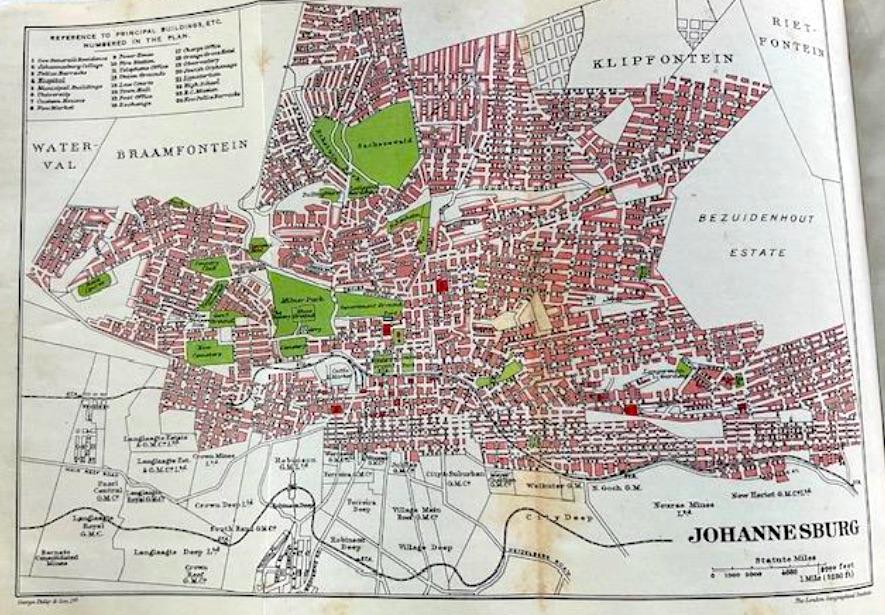 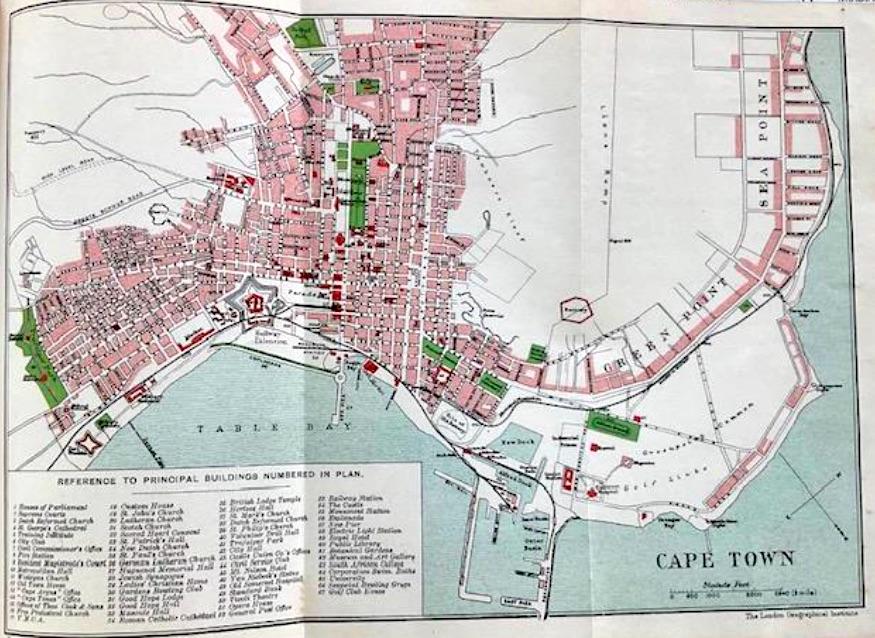 The maps for Johannesburg and Cape Town

All roads lead to Bloemfontein - The Guide to South and East Africa.jpg 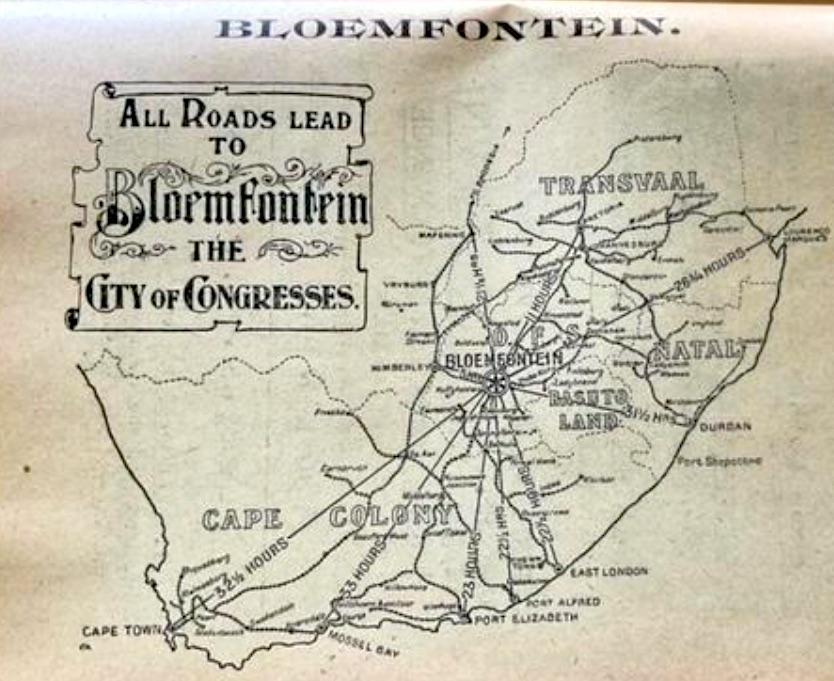 The City of Congresses

I hope that my writing about this particular find will alert Heritage Portal readers to  the possibility of finding this volume in their own bookshelves. It was a publication that survived until the 1950s. The value today depends on date, completeness and condition. Who knows, perhaps in a hundred years time all those Lonely Planet guides will acquire a similar collectable status.