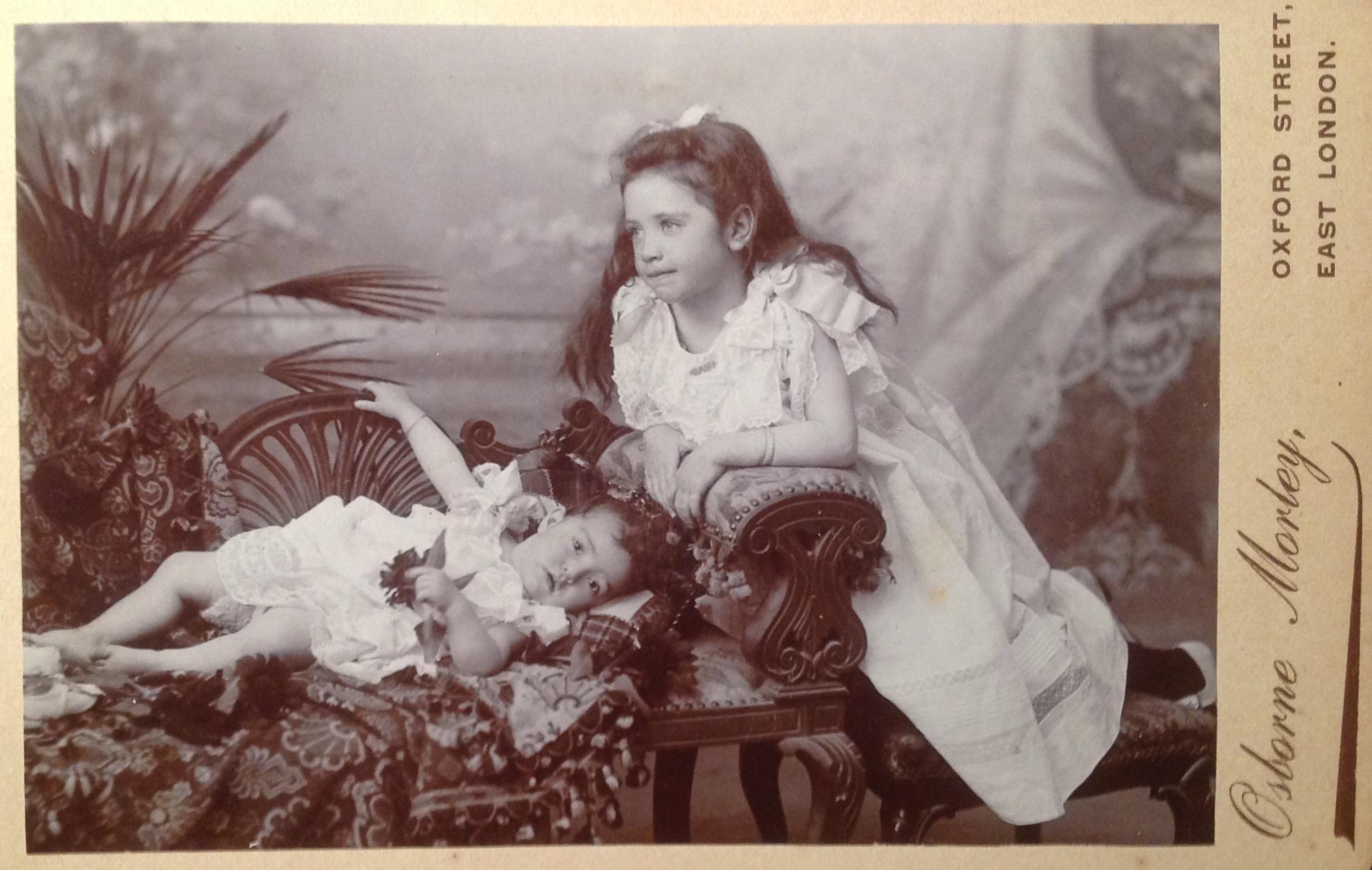 The town of East London, located in the South African Eastern Cape Province, received its name on 14 January 1848 when Sir Harry Smith proclaimed the Buffalo mouth area as the “Port of East London”. 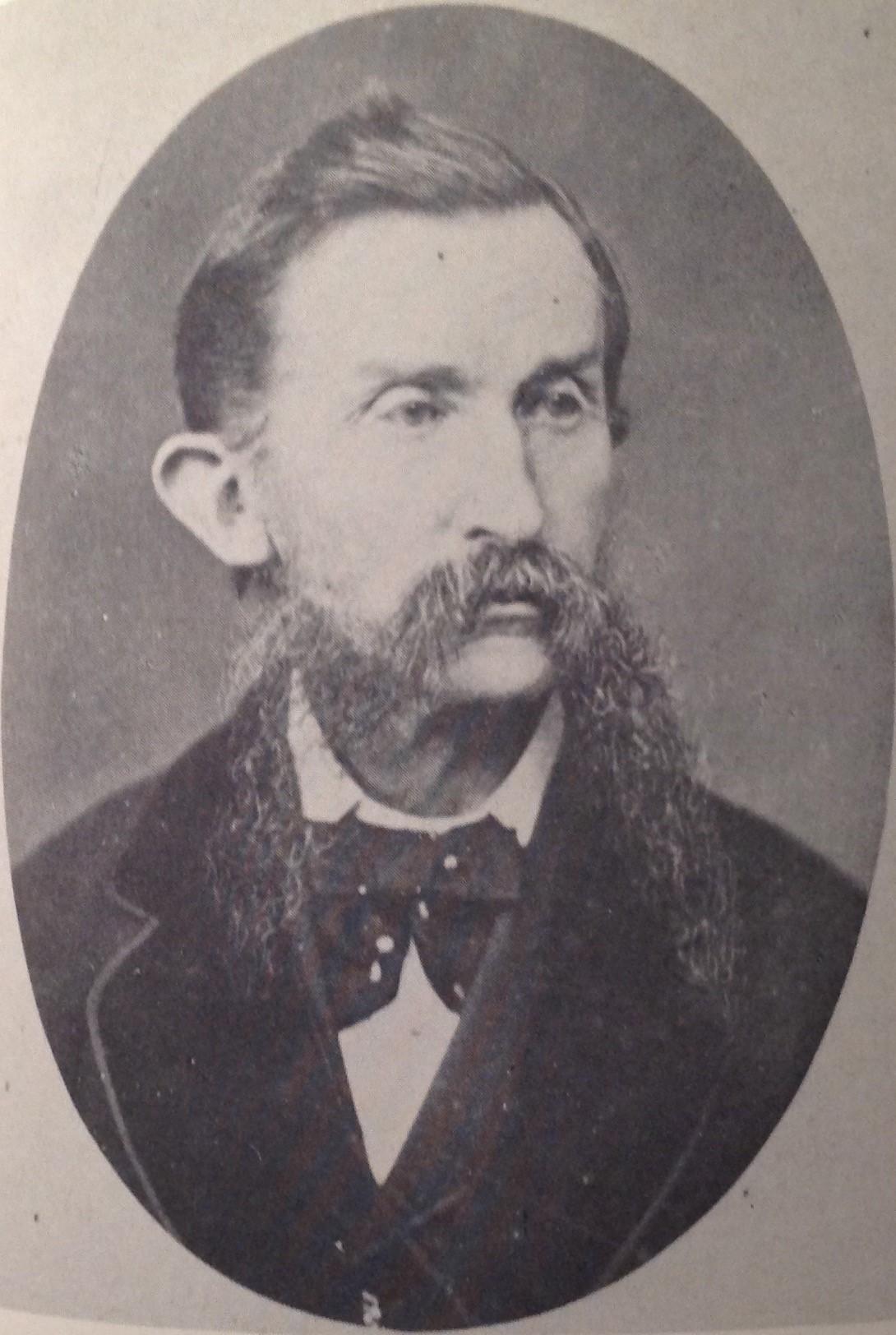 During 1858, King Williams Town had two permanent photographic establishments whereafter it was never without a resident photographer.

Six years thereafter, Osborne Morley arrived on the scene (August 1881). Another source has him recorded as having arrived in East London during January 1883. The first date is however accepted as the more probable version. 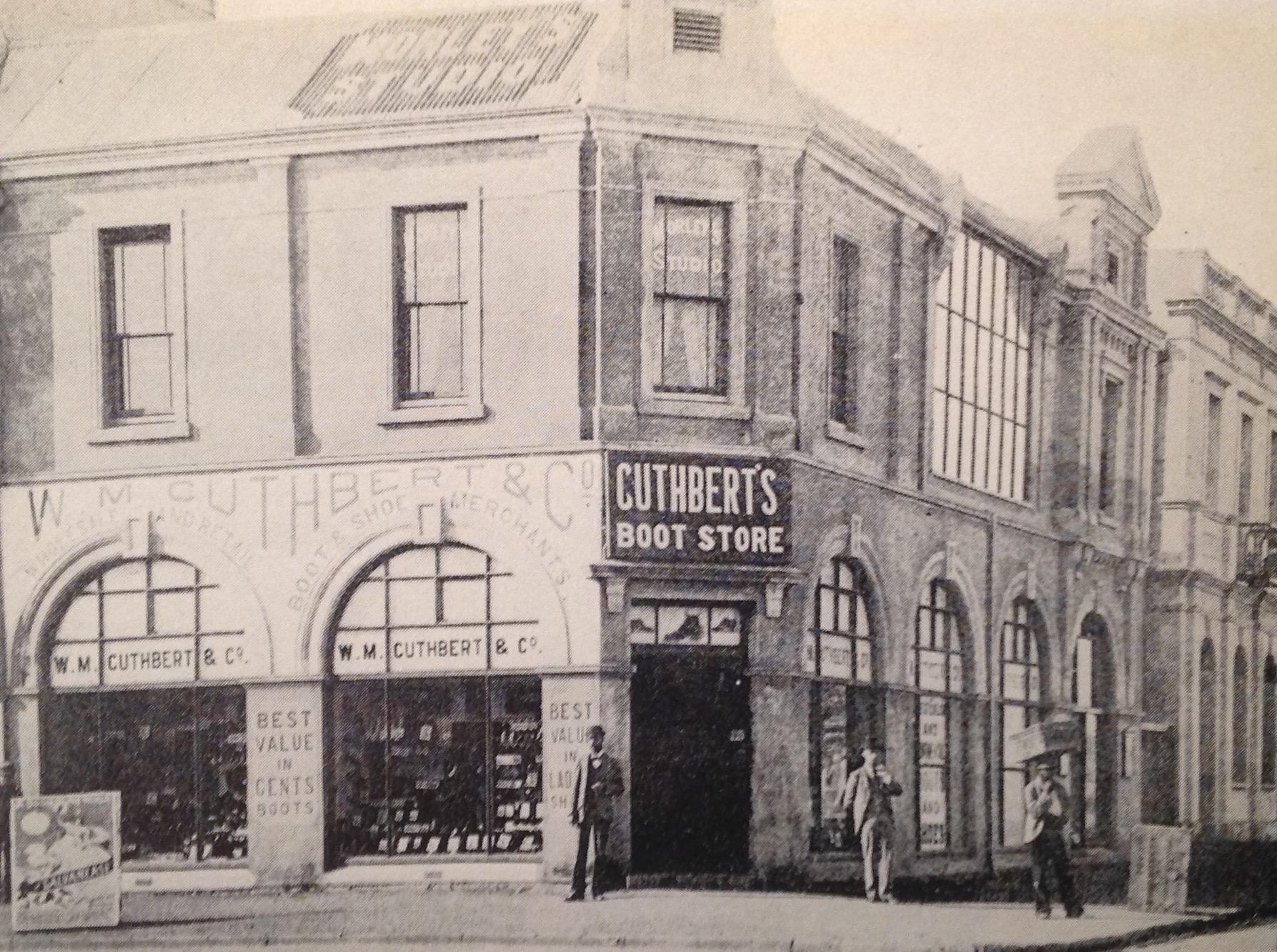 The Morley studio in East London on the corner of Oxford & Hanover street. The studio was based on the second floor – above the Cuthbert’s boot store. Standing at the entrance of the building are Morley (on the right - with pipe in hand) and his brother in-law George Dersley (on the left of the image) whom he was in partnership with for some three years when based in King Williams Town prior to opening the East London studio (Circa 1893). Image reproduced from Denfield (1965) – Pioneer Port

Osborne Morley, son to Henry and Sarah Morley, was born in New Holland (Yorkshire) during August 1850.

Morley emigrated to South Africa in his late teens or early twenties (late 1860s or early 1870s). The first identified record of Morley on South African soil, a marriage certificate from December 1873, has him recorded as machine driver. This indicates that he did not start his career in South Africa as a photographer.

During around 1878, Morley went into a photographic partnership with his brother in-law George Henry Dersley (who emigrated with his family from England during 1861). Their King Williams Town studio, based on the corner of Alexander and Cathcart road, operated under the studio name Dersley & Morley. 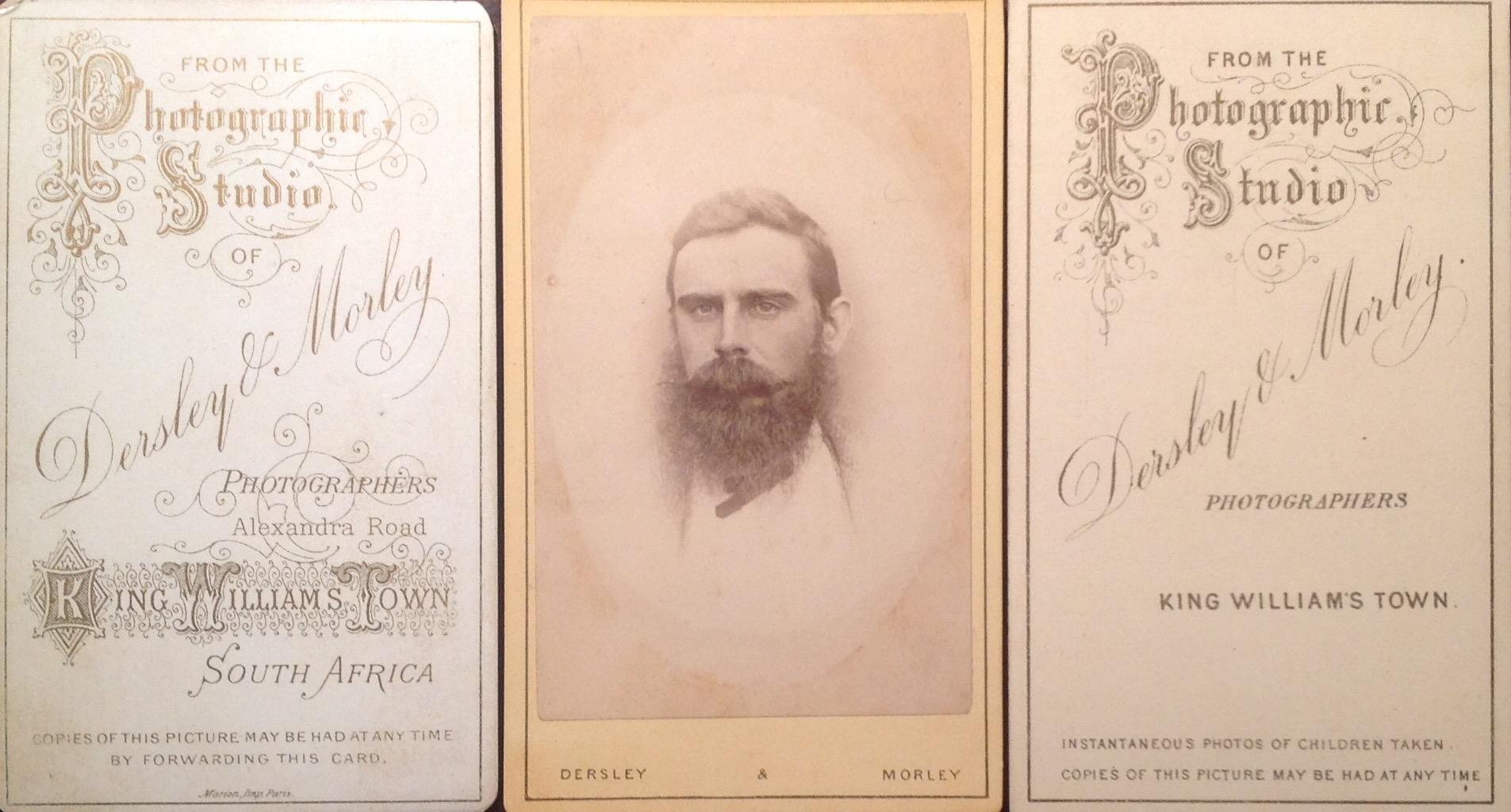 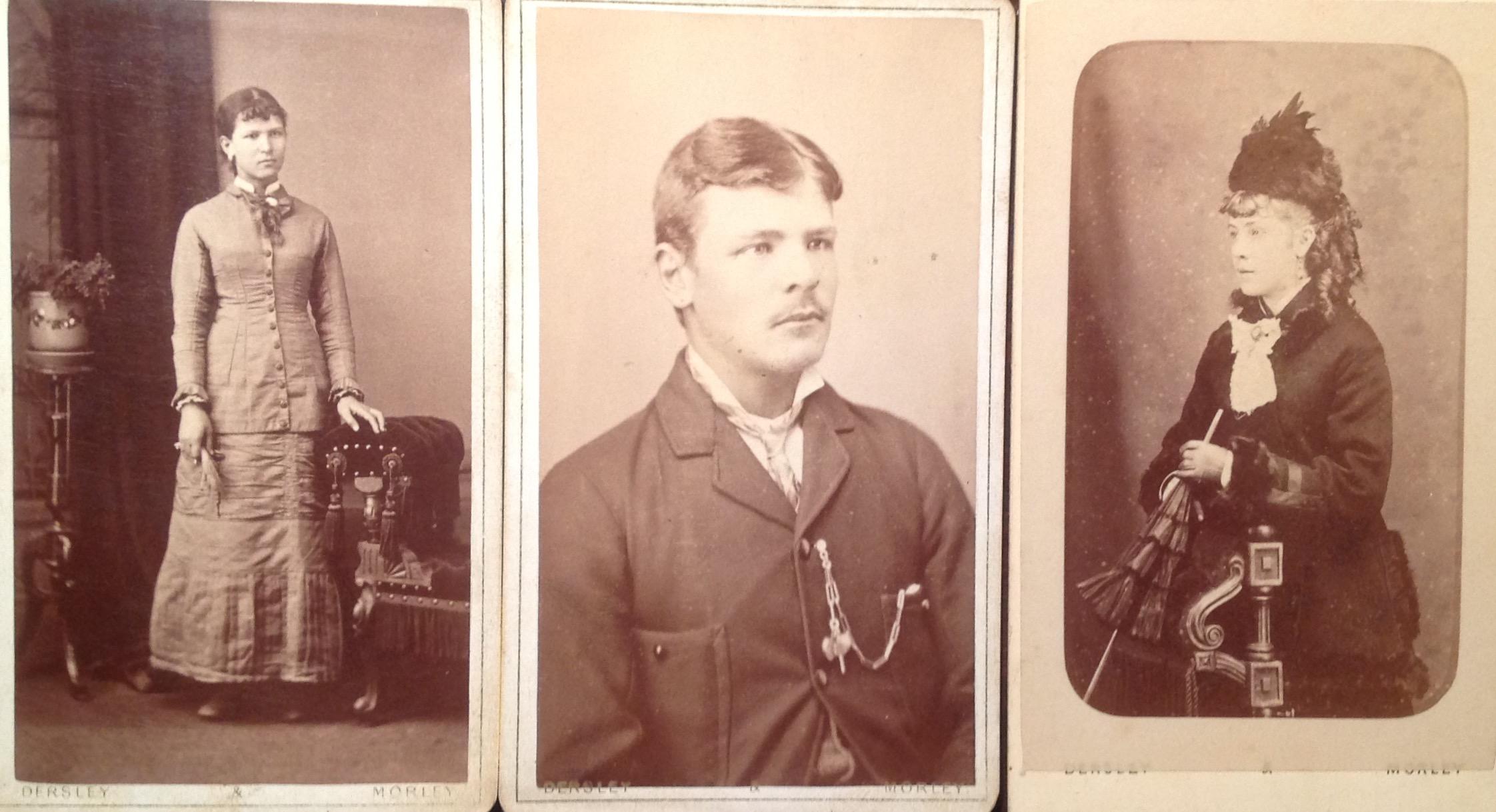 Carte-de-Visite photograph (back and front) by King Williams Town based Dersley and Morley via Carol Hardijzer.JPG 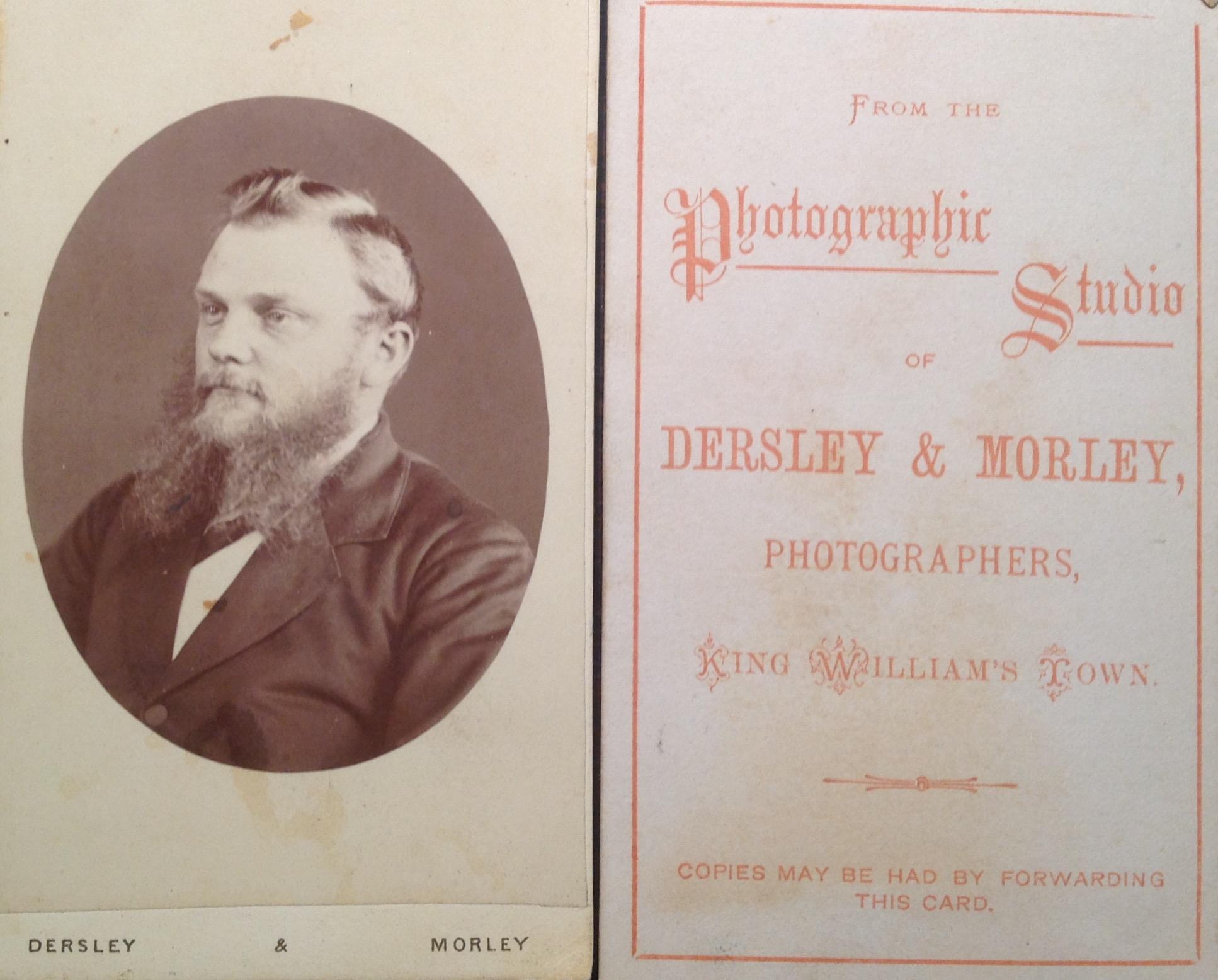 Dersley and Morley, although running a studio together, clearly also ventured beyond the studio walls in that it is recorded that they photographed Sandili, the Chief of the Gaika Tribe following his death after being wounded in action. The photograph, mounted on what seems to be a cabinet card, was probably sold locally as a memento of the incident. Printed on this card is:

Sandili, Chief of the Gaika Tribe, wounded in action 29th May; died 4th June, age 57 years; buried at Isidenge 9th June 1878. Note - When the body was discovered it had been partly eaten by wild animals; the bullet entered the right side passing out at the back. Sandili's left leg was very much smaller than the right. (Hirst, 2005).

This partnership lasted some 3 years whereafter Morley moved to East London to pursue his own photographic interests. He took over the established studio of Percy Cowen in Oxford street during August 1881. This is assumed to be the same studio Morley was based at for some 37 years – on the corner of Oxford and Hanover (Gladstone) street. 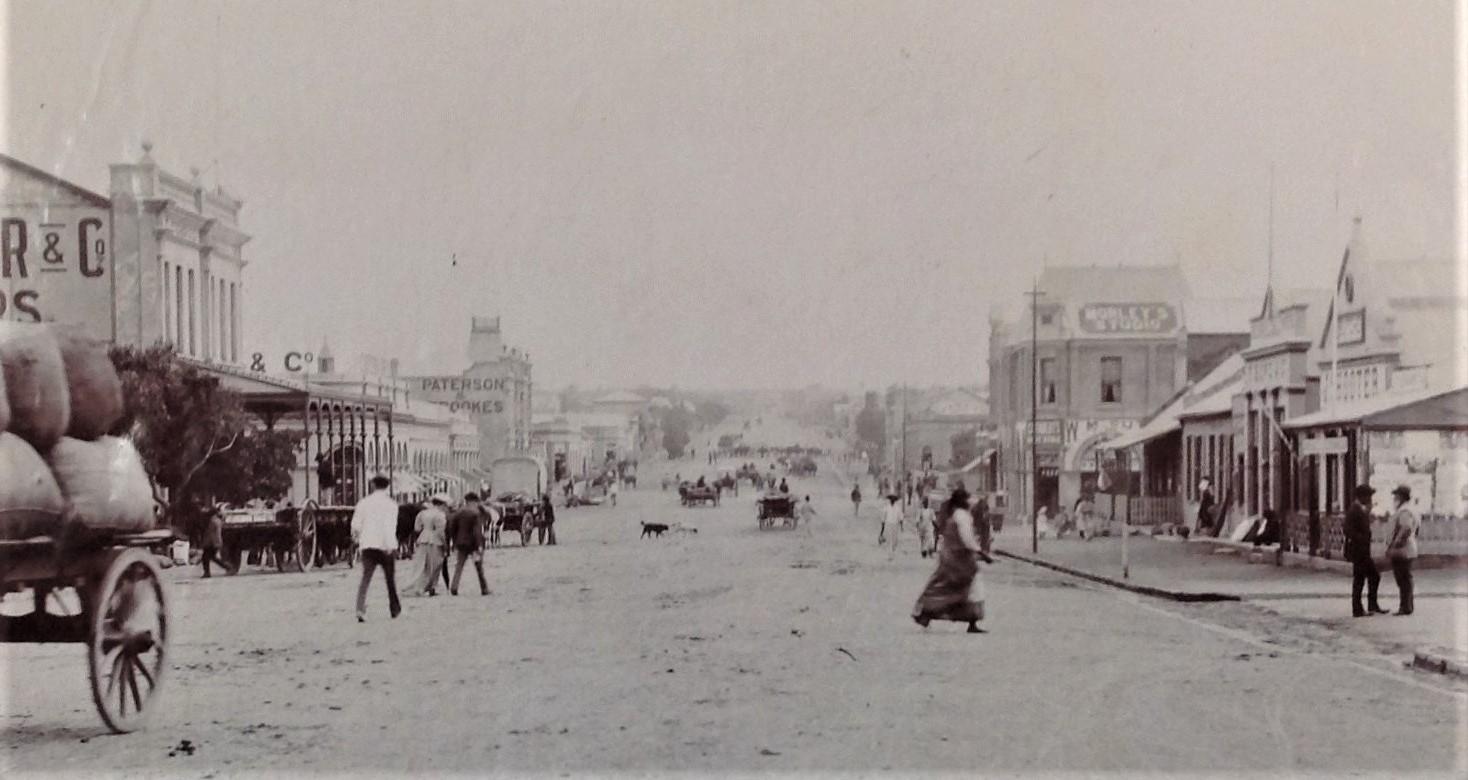 Street scene in East London. The Morley studio signage can be seen on the roof of the first double storey complex on the right (Circa 1900)

Morley became a well-respected man in East London in that he was described as “an enterprising, successful and popular photographer who more than any other man, was responsible for recording systematically the changing face of East London” in that he recorded the phases of East London’s public life including buildings, harbour development, street scenes, historic gatherings etc. These images were offered for sale to the public.

When his studio was destroyed by fire in 1918, irreplaceable photographic records of East London were also lost forever. The cause of the fire is unknown. Following the devastating loss of the studio fire, Morley aged 68 at the time, proceeded into a forced retirement.

Although a lengthy photographic career, Morley does not seem to have published any photographic albums. Images taken outside the studio were seemingly sold out of hand. 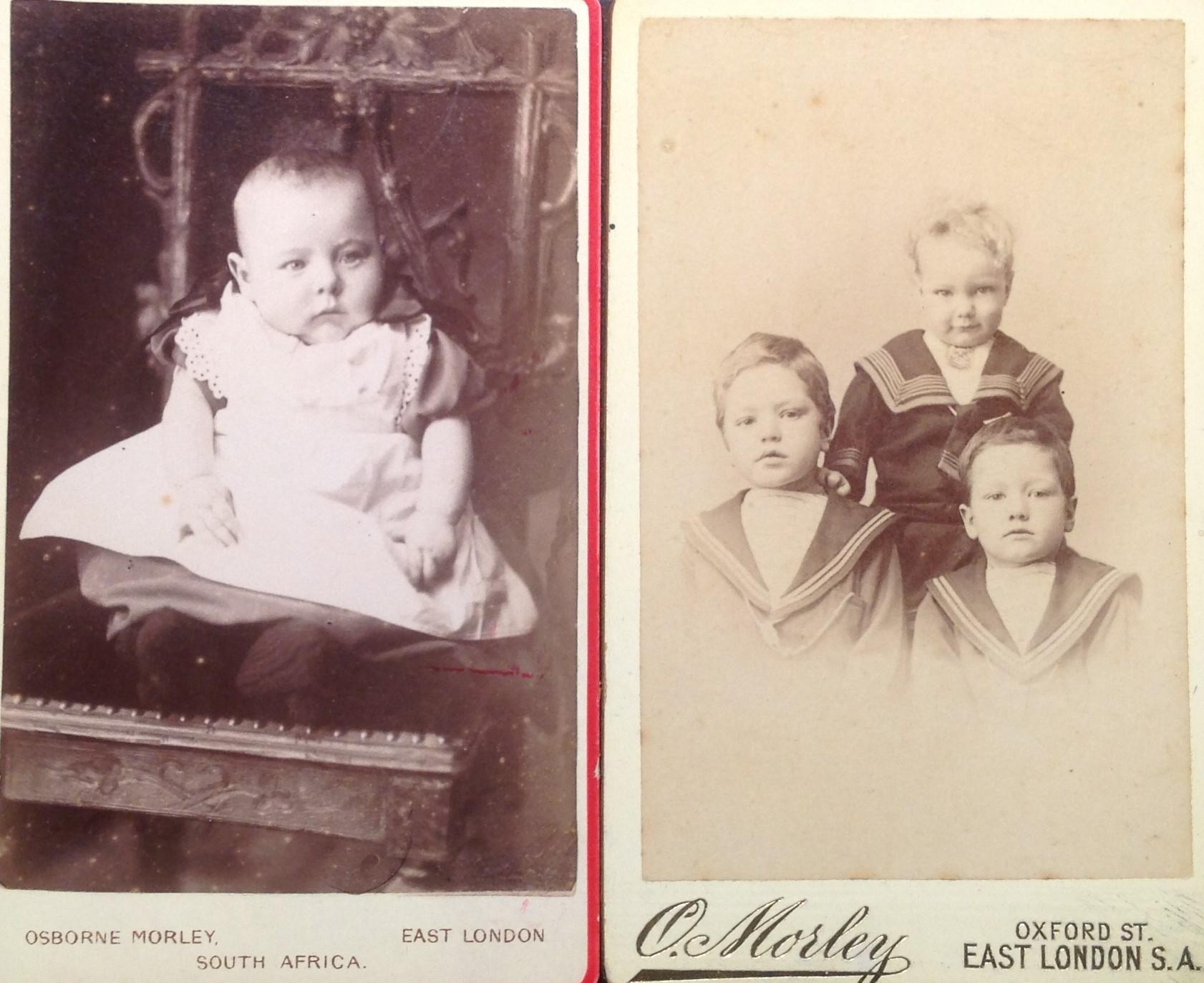 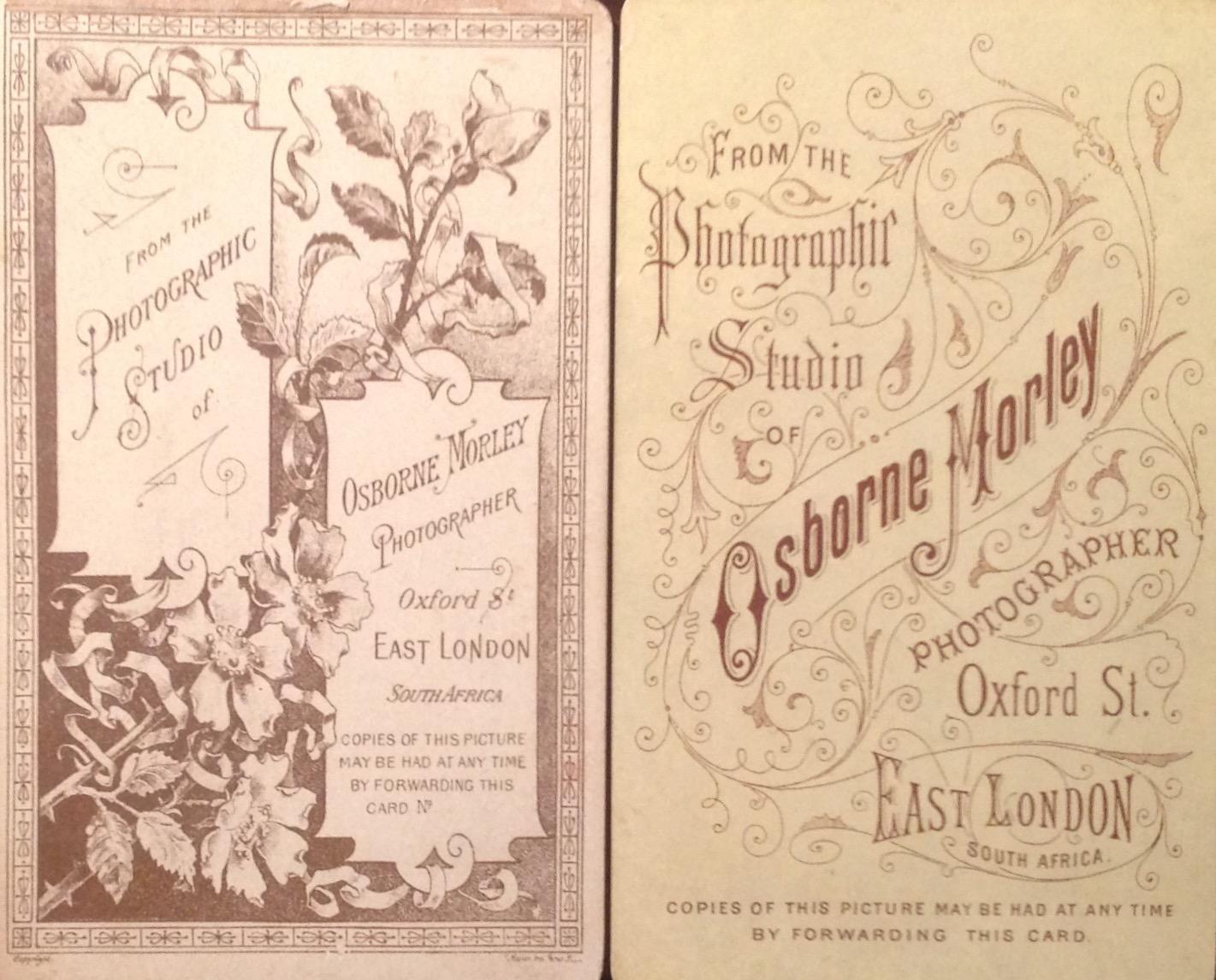 Two carte-de-visite backs used by East London based photographer Osborne Morley. These would date from before 1888 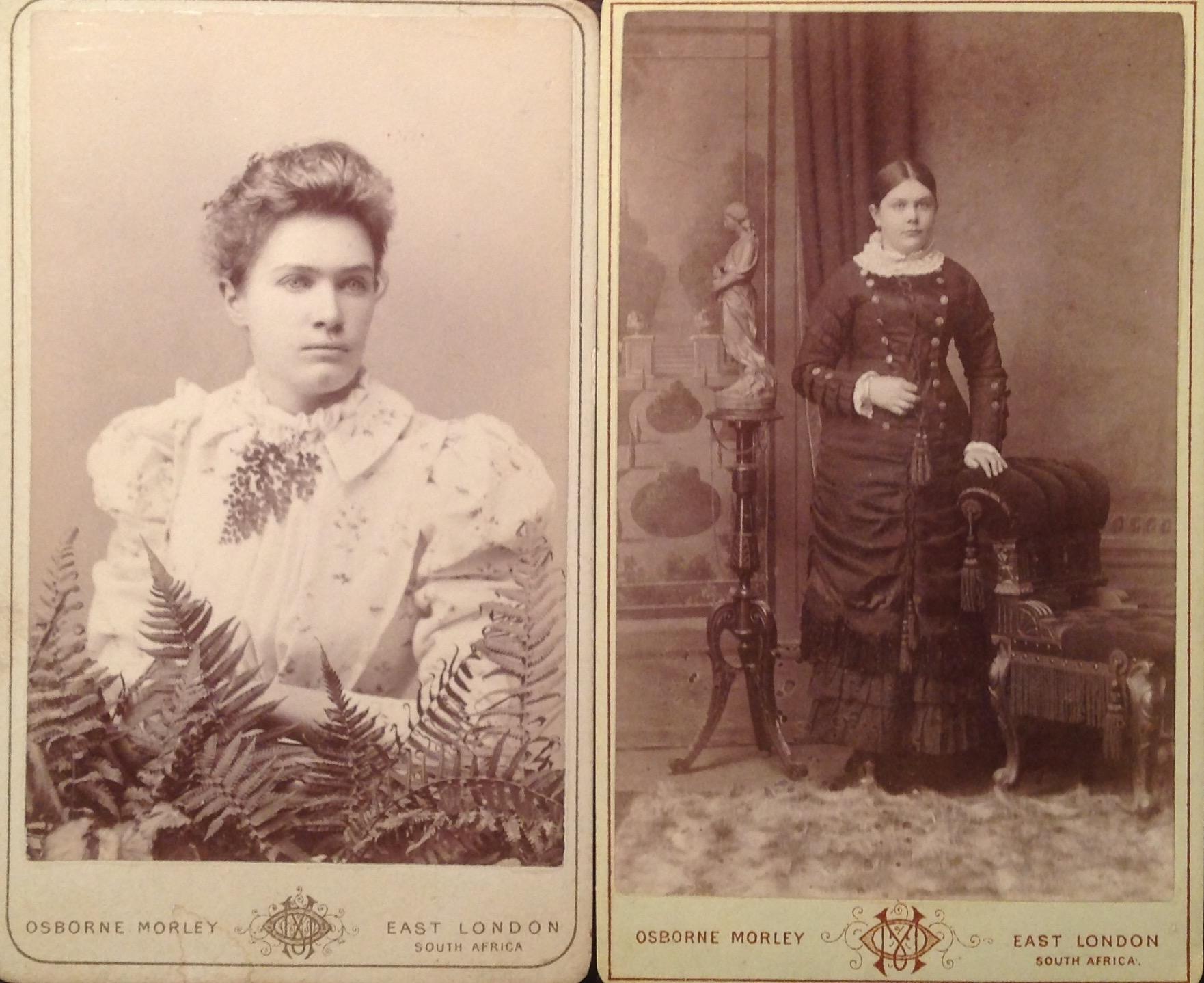 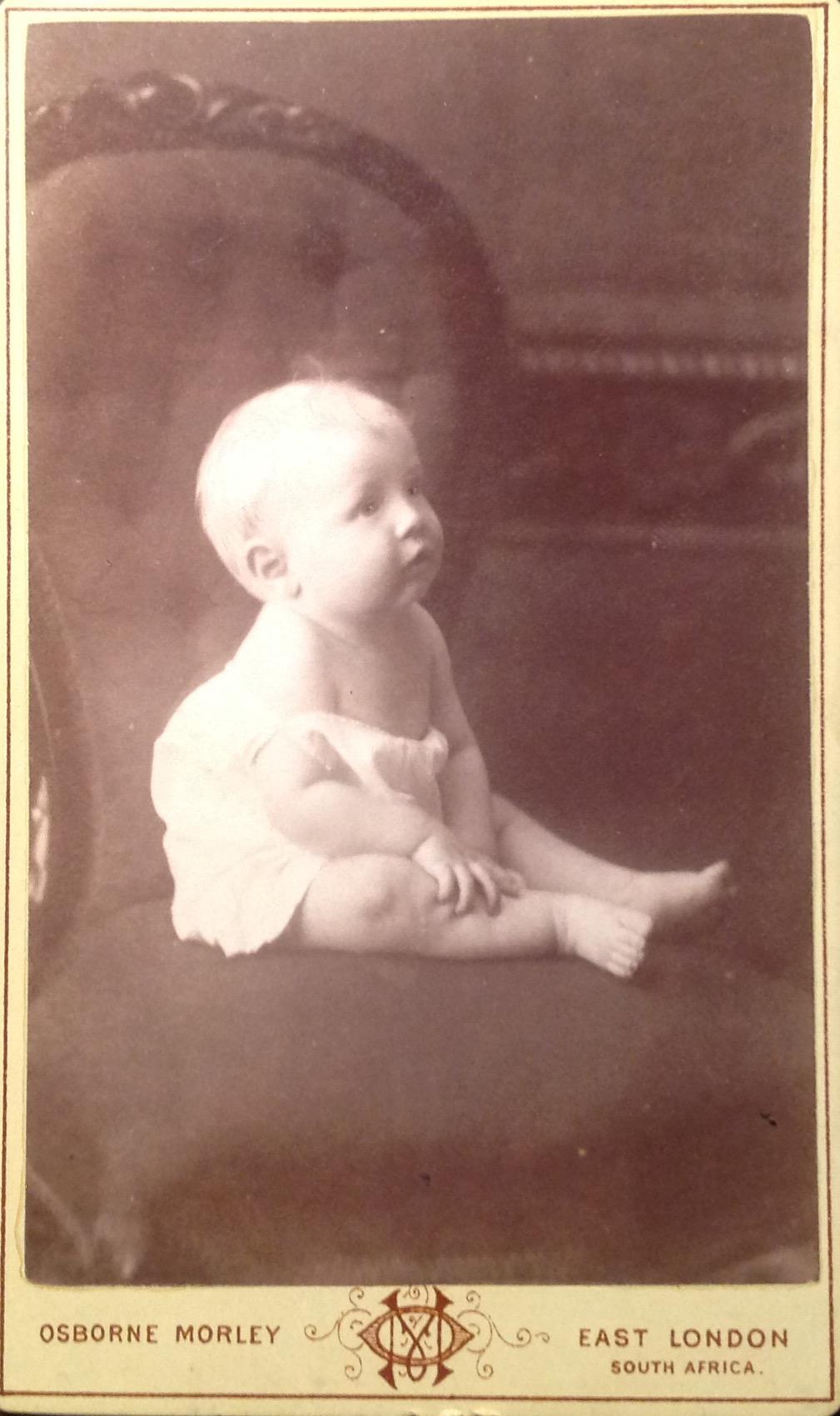 Morley and his third wife, Helena moved to Johannesburg where he died aged 76 on 21 July 1926, following pneumonia. They resided at 50 Dorothy Road in Norwood, Johannesburg at the time of his death.

Morley experienced a number of traumatic life events. He was married three times. Not only did his first two wives die early in life, but he also lost two children at a very young age.

Whilst correct that Morley’s first wife was the sister to George Henry Dersley, Morley’s second wife has erroneously been recorded by historians as also being a sister to Dersley (this error may be due to his second wife being recorded as a Dersley on his death certificate).

On 3 December 1873 Morley married his first wife Mary Ann Dersley in Grahamstown. Their daughter, also Mary Ann, was born the following year (6 December 1874). His second marriage certificate has him recorded as a widower. It is not clear when Mary Ann senior died or what the cause of her death was. It is also not clear what happened to young Mary Ann following her mother’s death. Archival records show a Mary Ann Morley that married a Francis Samuel Pinchin in Cape Town during May 1893. This may be one and the same Mary Ann – further research will need to confirm this.

On 21 September 1880 Morley married his second wife, 18-year-old Alice Hudson Byrnes in Grahamstown (born in King Williams Town on 23 May 1862). Alice, 10 years Morley’s junior, was the sister to Ellen Maria Byrnes (born 22 Dec 1854) who married the photographer George Henry Dersley (1854 – 1941) on 23 October 1878. Morley was based in King Williams Town at the time of his marriage to Alice where he was in a photographic partnership with Dersley.

On 20 October 1886, 6 years after the couple got married, Alice passed away in King Williams Town leaving Morley with two sons aged 1 and 3. It is not clear whether young Mary Ann (child from his first wife) was still alive or in the care of Morley at that time. The cause of Alice’s her death at the age of 24 remains unknown. She passed away at her sister’s home in King Williams Town (the residence of photographer George Henry Dersley).

From his second marriage, Morley had two sons:

Almost 3 years after the death of Alice, Morley married Helena Kate Westgate, half his age, on 3 September 1889 in East London. Helena was born in England – Wimbledon on 13 September 1872. Of their three children, the couple sadly lost two children, namely:

The middle of their three daughters, Rose Winifred (born on 9 September 1891), later married a Carter. Helena passed away aged 88 during October 1957 (more than 30 years after Morley’s death). Helena resided in Krugersdorp at the time of her death.

The traumas following the death of two of his children seem to explain Morley’s love for photographing children. As if not enough to have lost 4 loved, Morley’s East London studio burned down during 1918 bringing an end to his photographic career. 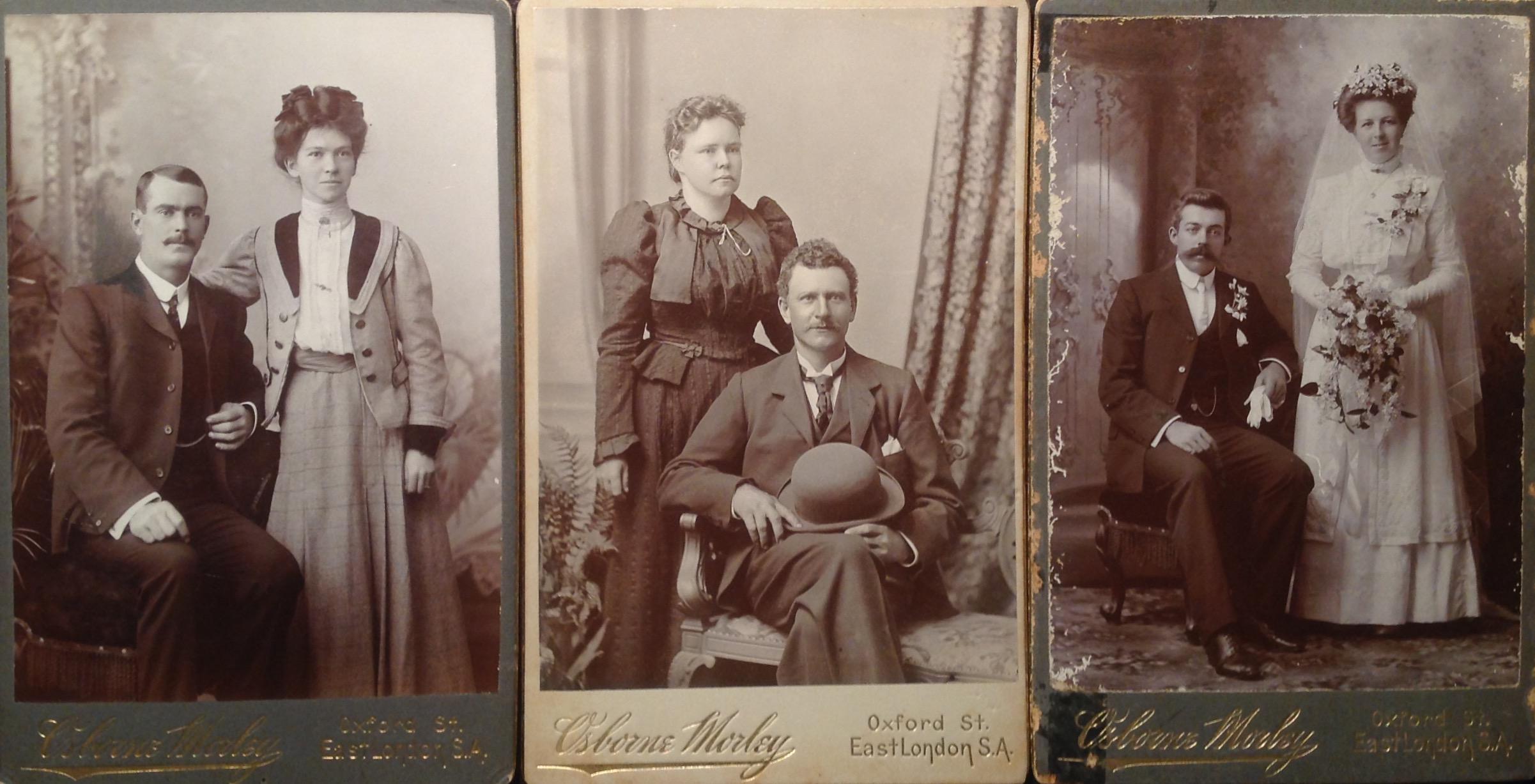 Cabinet Card format photographs of 3 unknown couples in the studio of East London based Osborne Morley. The couple on the left are the Fletcher couple. Note the early tradition where women stood and men were seated when photographed (Circa 1895).

Cabinet Cards (back and front) by East London based photographer Osborne Morley via Carol Hardijzer - MA6.JPG 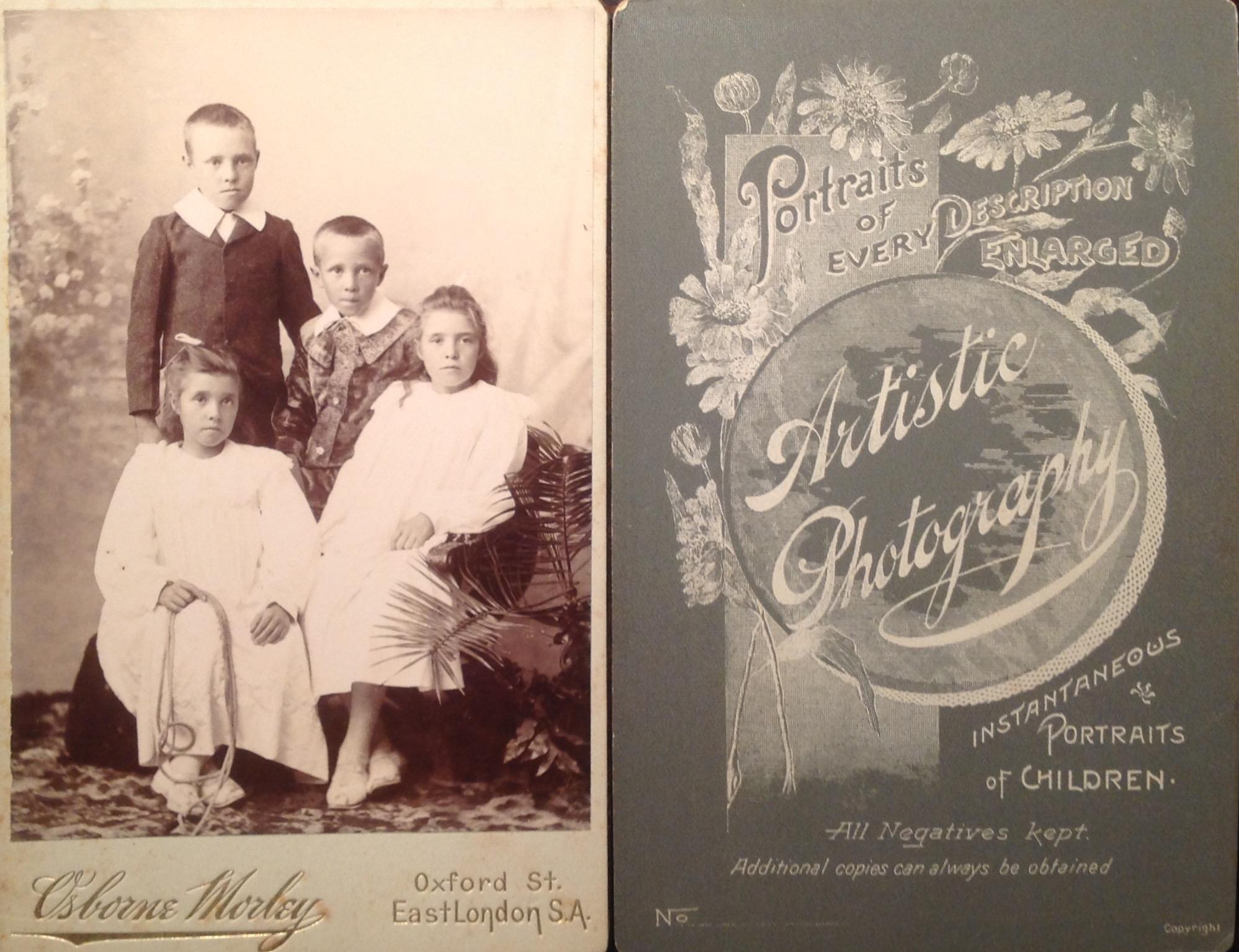 Cabinet Card photograph by Osborne Morley of 4 unknown siblings (Circa 1905). Note the girl on the left holding either a whip or a skipping rope. Note the advertisement on the back of the card in which Morley advertises instantaneous portraiture of children. These cards, on which the photographer then pasted the image, would have been ordered from abroad. 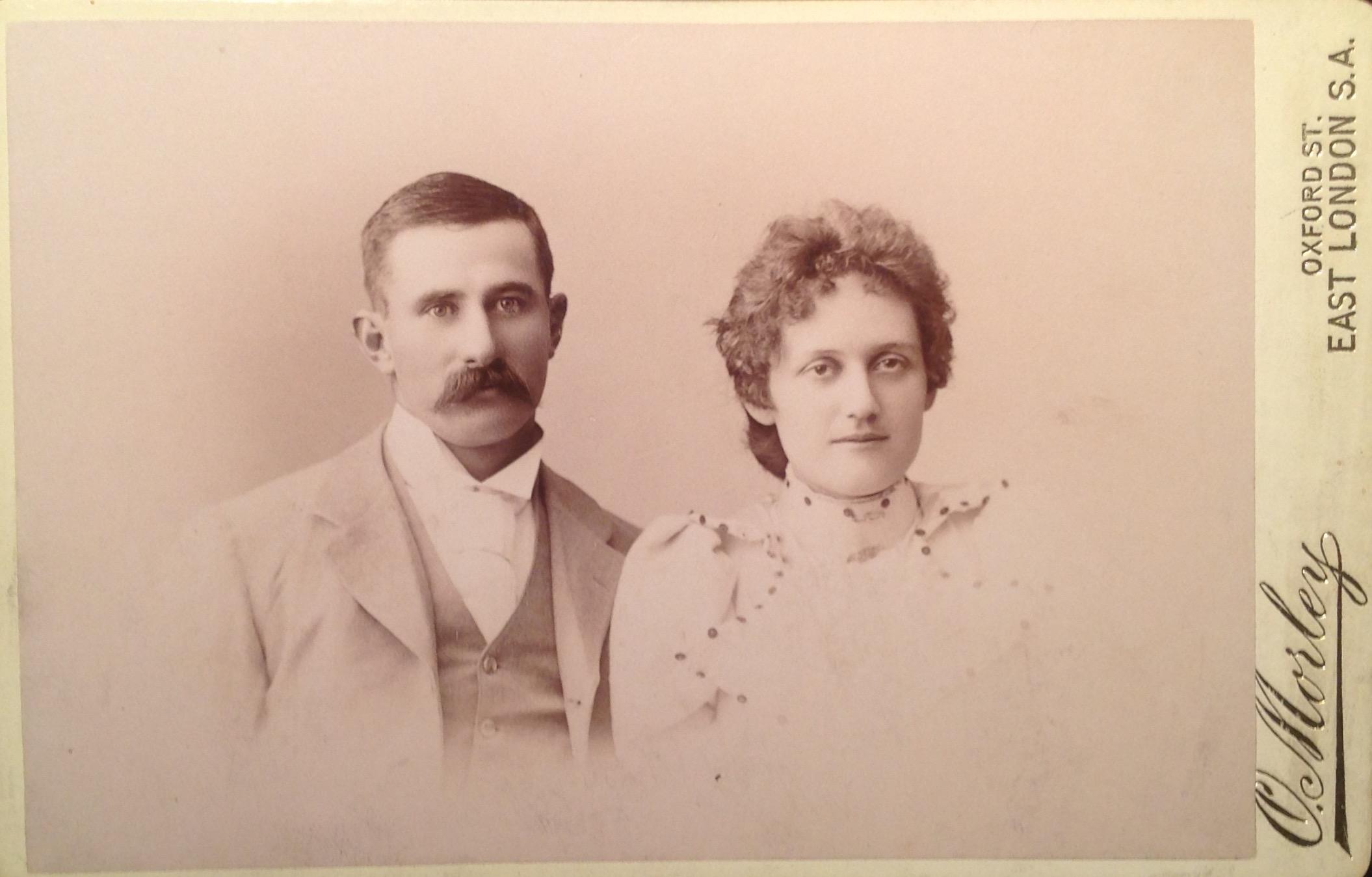 Cabinet Card photograph of unknown couple by East London based photographer Osborne Morley (Circa 1906). Unlike many other earlier studio photographers, Morley was clearly comfortable to use the horizontal photographing technique in his studio 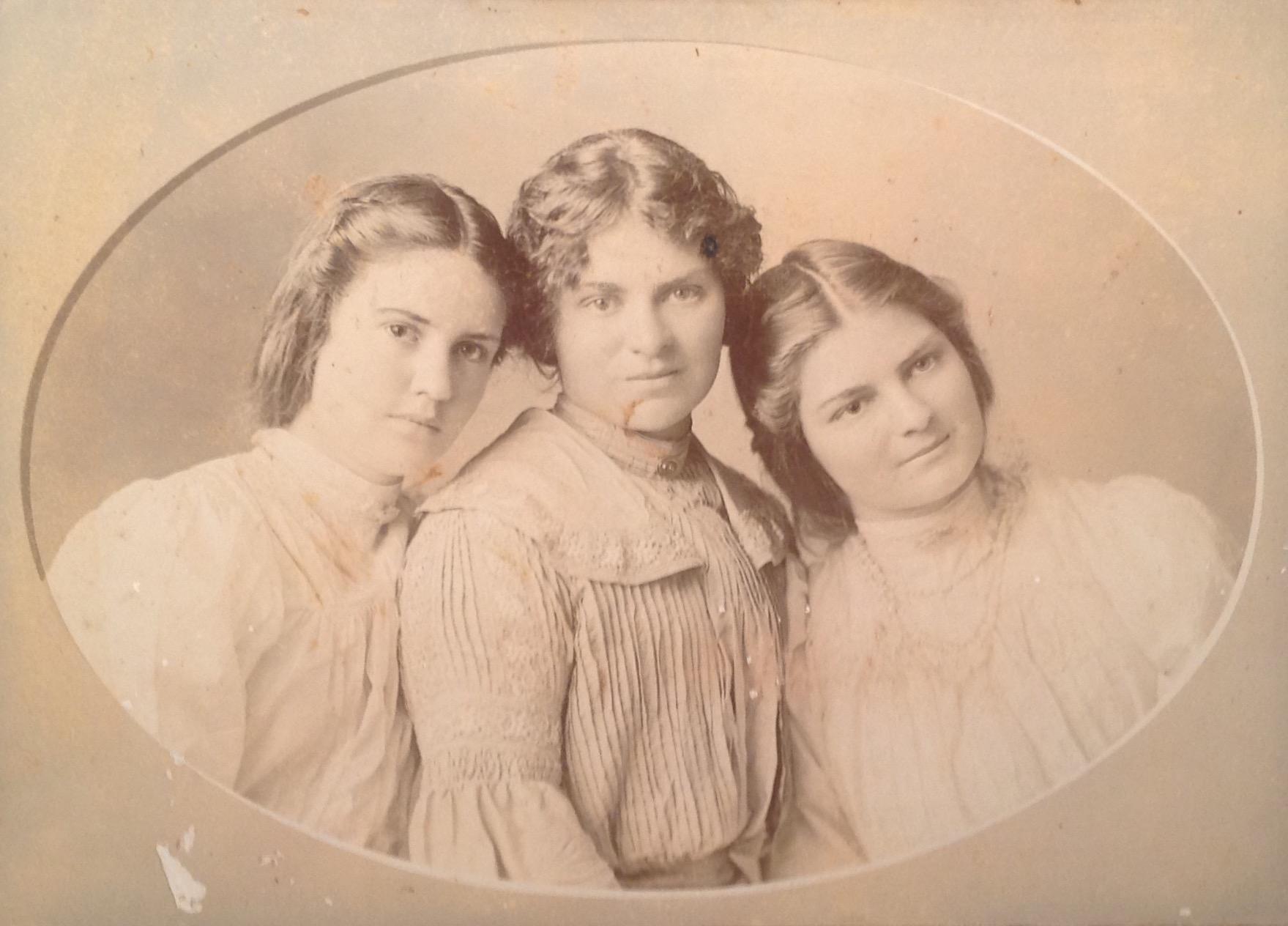 Cabinet Card photograph of 3 unknown sisters by East London based photographer Osborne Morley (Circa 1908). Whilst the oval frame has been used in his earlier studio work, this is the only Cabinet Card image identified to date that was mounted in an oval frame format by Morley

The meaning of the surname Morley originates from the Anglo-Saxon word 'morleah', a locative name given to someone who lived or worked in a march or marshy woodland clearing.

Although photographers often produced photographic albums with scenery of their own or surrounding towns, it does not seem that Osborn ever published such album. Ironically, his ex-partner and brother in-law, Dersley produced a photo album on East London during 1894 titled “A Souvenir of East London”.

Ongoing research on Osborne Morley is required. Any reader that may be able to provide additional information on Morley, especially in terms of the studio fire during 1918, is requested to contact the author at carol.hardijzer@webmail.co.za 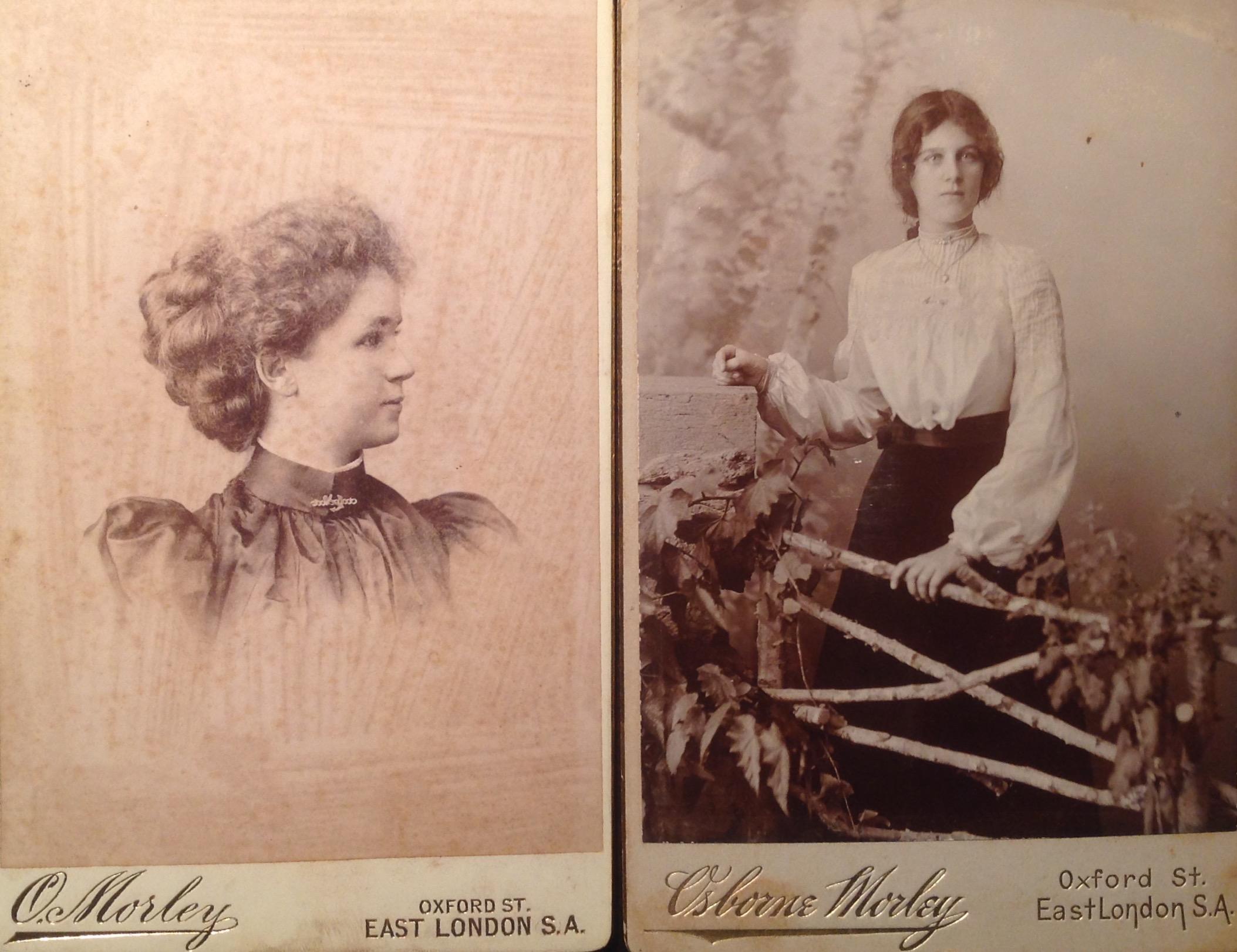 Two ladies photographed. The image in the left shows remanence of poor photographic processing. The beauty of the sitter is however still successfully portrayed. Inscribed on the back of the image on the right: “To my dearest Mary with fond love from Winnie – When other lips and other hearts” 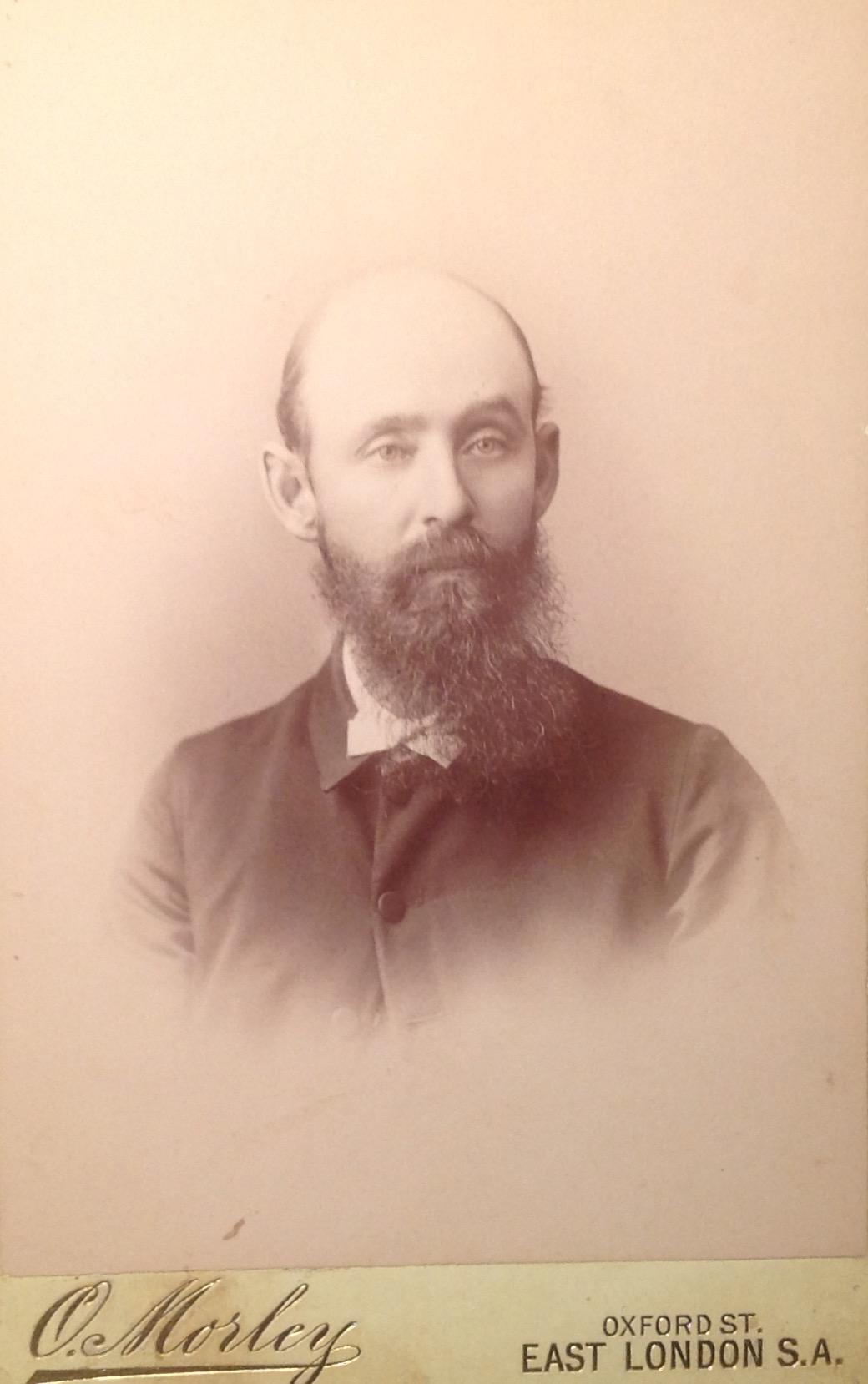 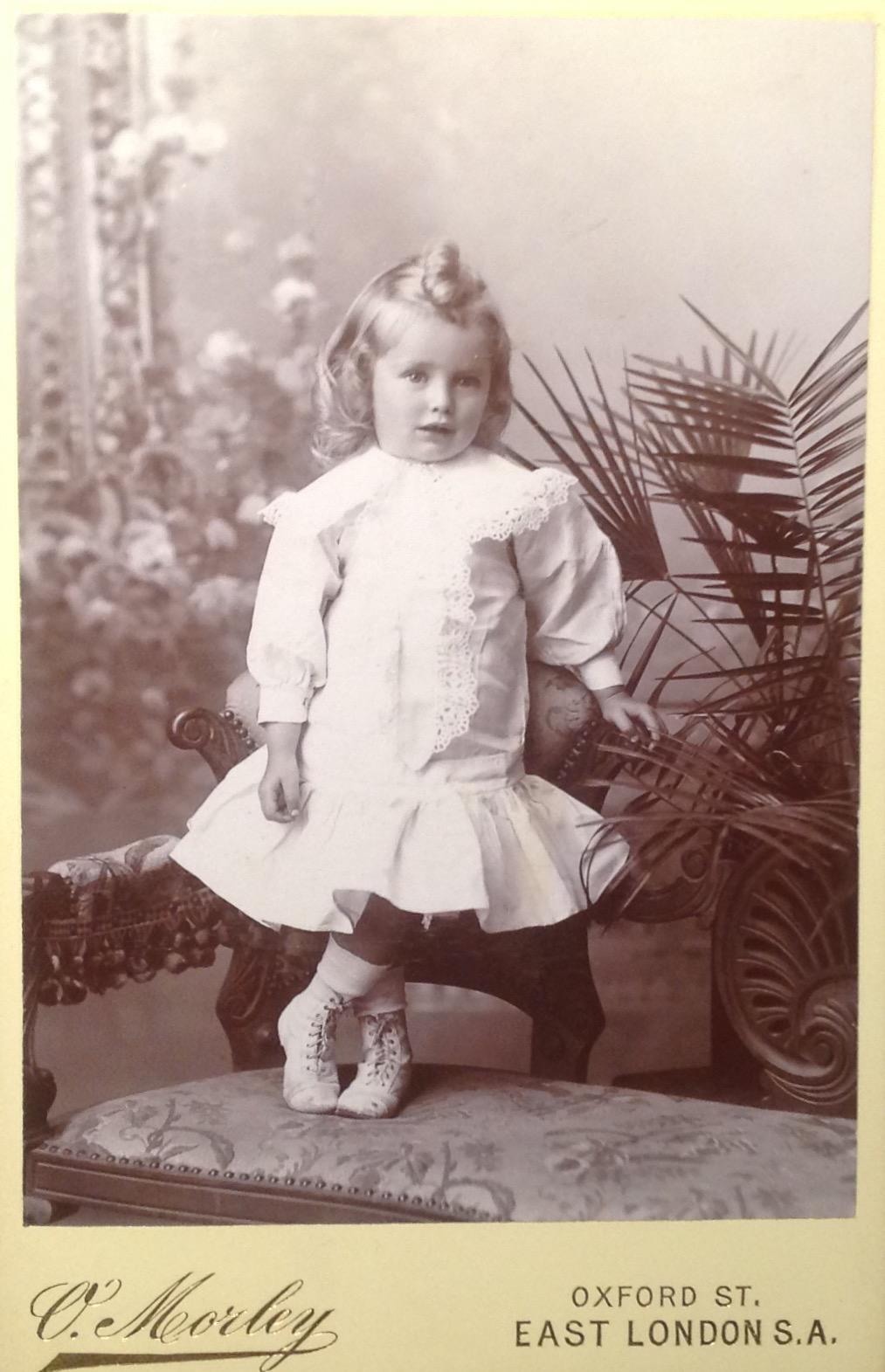 Is she not cute? A well-to-do little girl photographed by East London based Osborne Morley. The back of the photograph carries the following inscription: To dear Auntie Ethel with love from little ‘Franchise’.

Main image: Cabinet card format photograph by East London based photographer Osborne Morley (January 1902). The following inscription appears on the back of the card: With love to dear grandma from little Winnie and Dorothy