The Story Behind the Monument to Petrus Molefe 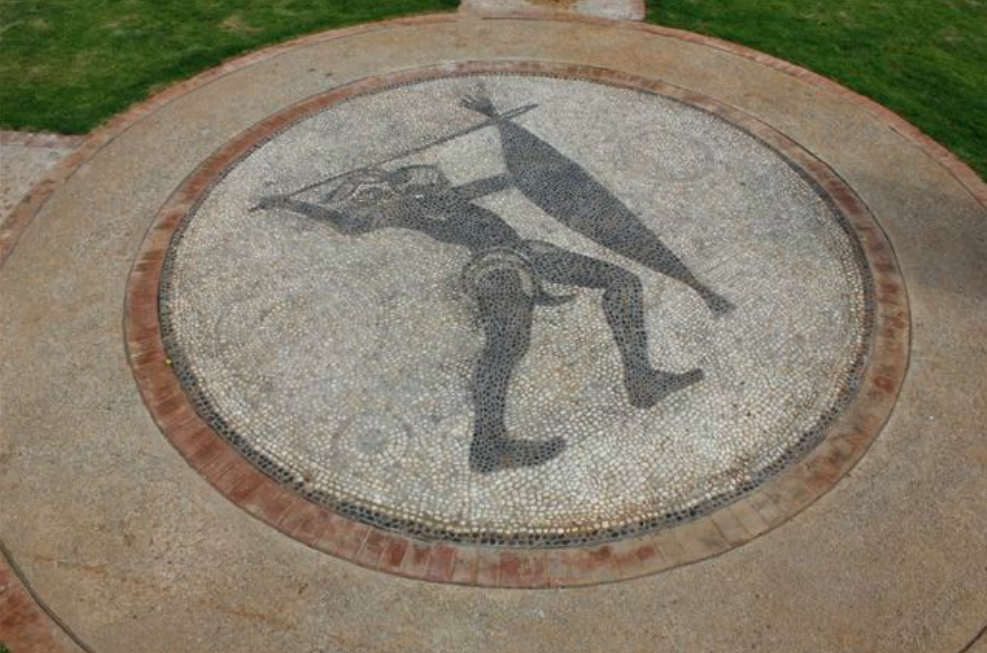 The Petrus Molefe Monument, also known as the Umkhonto we Sizwe (MK) Monument, is located in the Petrus Molefe Eco-Park on Mtambo Street in Dhlamini Soweto. Molefe was the first operative to be killed during the early operations of MK. Thank you to the City of Johannesburg for giving us permission to publish the details below.

The launch of uMkhonto we Sizwe (Spear of the nation) the armed wing of the ANC, was announced on 16 December 1961 by a series of bomb blasts against apartheid structures in Johannesburg, Durban and Port Elizabeth. Petrus Molefe was the first MK operative to be killed during those operations. He lost his life in Dube Soweto, when an explosive device which he was carrying went off. He was accompanied by Ben Ramotsi, who was seriously injured. Molefe is buried in Nancefield Cemetery, Soweto.

The Petrus Molefe Monument was commissioned by Johannesburg City Parks, with guidance and input from Community Development (Arts, Culture and Heritage). The monument was formally unveiled at the opening of the Petrus Molefe Eco-Park on 9 December 2011. The launch of the new park, attended by MK veterans, was held in the run-up to the 50th Anniversary of Mkhonto we Sizwe (16 December 2011).

The artwork is set around four brick columns.  In the middle of columns is a wide circle with a floor-mosaic of the MK emblem of a warrior with a spear and shield (see main image).  The MK logo is done as a pebble –mosaic in back stones, against a white stone background.  The columns are 5 metres high by 700 cm wide, with cement tops.  The circle is 5 metres in diameter. 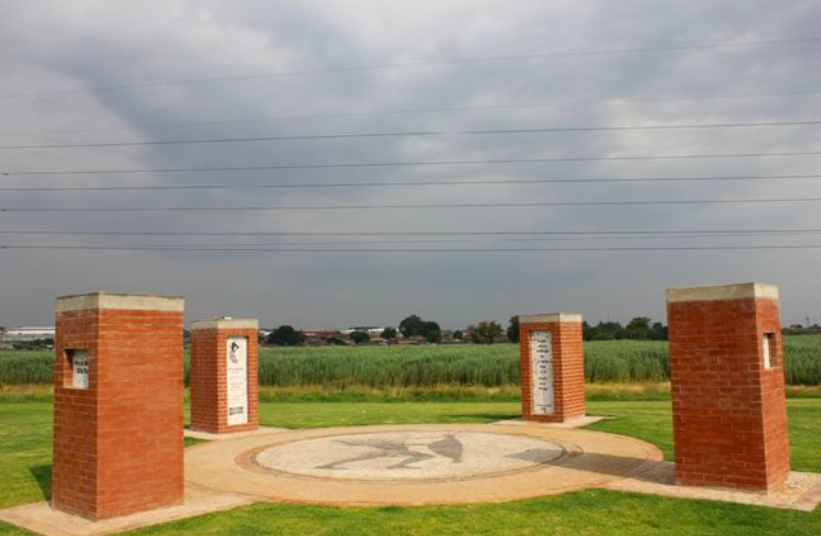 Monument to Petrus Molefe - The Four Columns (City of Johannesburg)

The four equidistant columns resemble sentry-boxes, facing in different directions (north-south and east-west). Each of the pillars is decorated with mosaic bearing inscriptions from key documents in the annals of the struggle for democracy.  The lettering is in black mosaic set into a white and off-white background.   The main pillar carries a portrait in mosaic of Petrus Molefe. 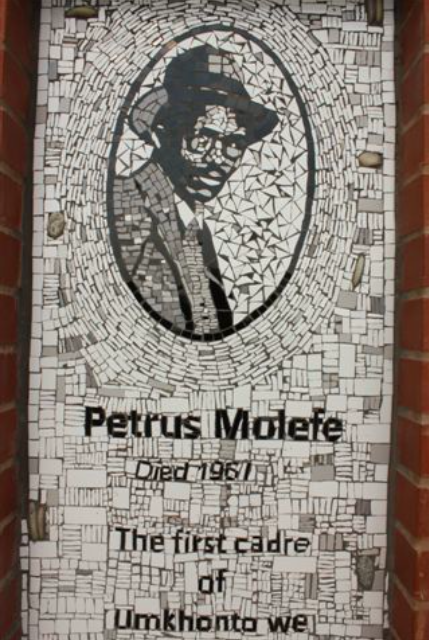 Portrait in mosaic of Petrus Molefe (City of Johannesburg)

The artwork is aligned with the nearby Freedom Charter Memorial, at the Walter Sisulu Square of Dedication in Kliptown, which is within view. Also linking with the Freedom Charter site, the Petrus Molefe monument is positioned between large planters on either side in the form of voting crosses.

The artwork was created and co-ordinated by Andrew Lindsay of the Spaza Art Gallery.  Initial concept development was by Shabir Ballim of the Office the Chief Whip, together with Eric Itzkin of Community Development.

Execution of the mosaic work was divided between two teams. The first was the regular Spaza Art mosaic crew consisting of: Moses Ndlovu, Dereck Vincent-Georges, John Twala, Bongani Msibi.  This group did two mosaic panels and the floor mosaic. The second was a womens’ collective trained by Drew Lindsay as part of a job creation and empowerment initiative in Bertrams.  The women were facilitated and led by Jacob Ramaboya.  They did the other two main mosaic panels, including the portrait of Petrus Molefe, as well as the name of the park that is set at the back of one of the columns facing the street. The womens’ group comprised: Antoinette Koekermoer, Chantall Palmer; Precious Klaasen, Nomagugu Moyo, Nobuyiselo Phendo, and Victoria Numbembe.