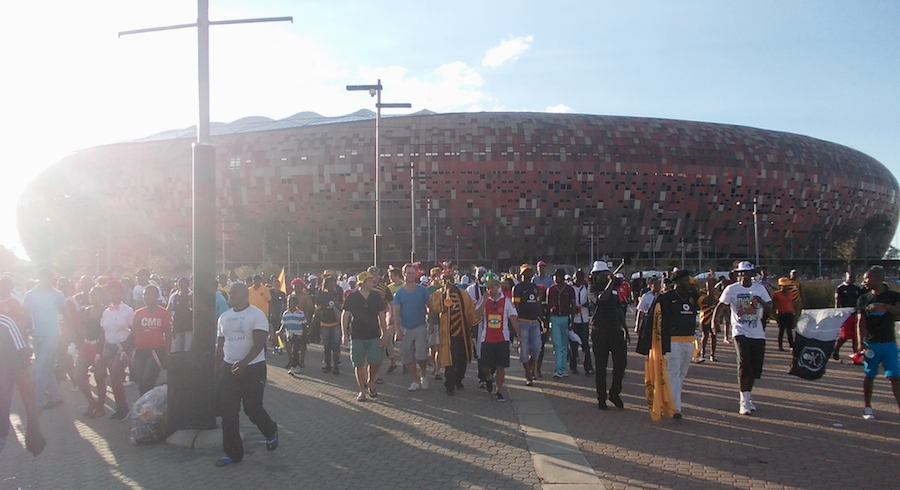 In 2010 journalist Lucille Davie went on a behind the scenes tour of Soccer City shortly before the stadium opened. Her experience and discussions with the architect helped her to write the wonderful article below. The piece was originally published on the City of Joburg's website on 28 January 2010. Click here to view more of Davie's work.

Architect Bob van Bebber waited 15 years to realise his dream. And it’s a dream the world can share this June when they take their seats at Soccer City.

Van Bebber originally proposed a stadium – not just any stadium but a world cup stadium – back in 1991 while completing his architecture degree at Wits University. But he was told a stadium required too much engineering - until then engineers mostly designed stadiums.

So he told his professor back then, respected conservation architect Herbert Prins, that one day he would do it. That day arrived in 2006, when his design for Soccer City was approved. 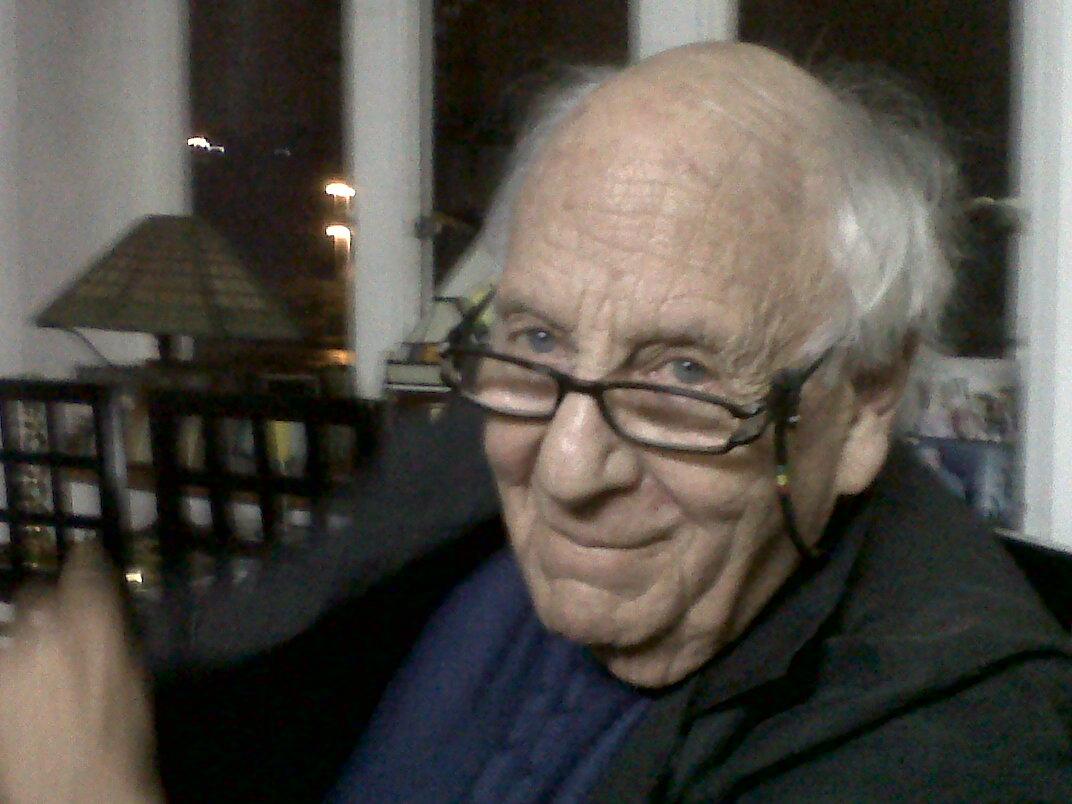 “This has been a dream project that I have been chasing for so long,’ he says.

A massive calabash, one of the symbols of rural African life, rises from the ground at Nasrec, outflanking the long, surrounding mine dumps.

“I wanted to bring aesthetics and design into a stadium,” he explains, a keen footballer at one time.

Van Bebber says the calabash was selected from a number of designs as being “the most recognisable object to represent what would automatically be associated with the African continent and not any other”.

“The calabash, or ‘melting pot of African cultures’, sits on a raised podium, on top of which is located a ‘pit of fire’. Thus the pot sits in a depression, which is the ‘pit of fire’, as if it were being naturally fired,” reads the info pack.

It is hoped that the calabash shape will be “recognised instantly by spectators in every corner of the world”. 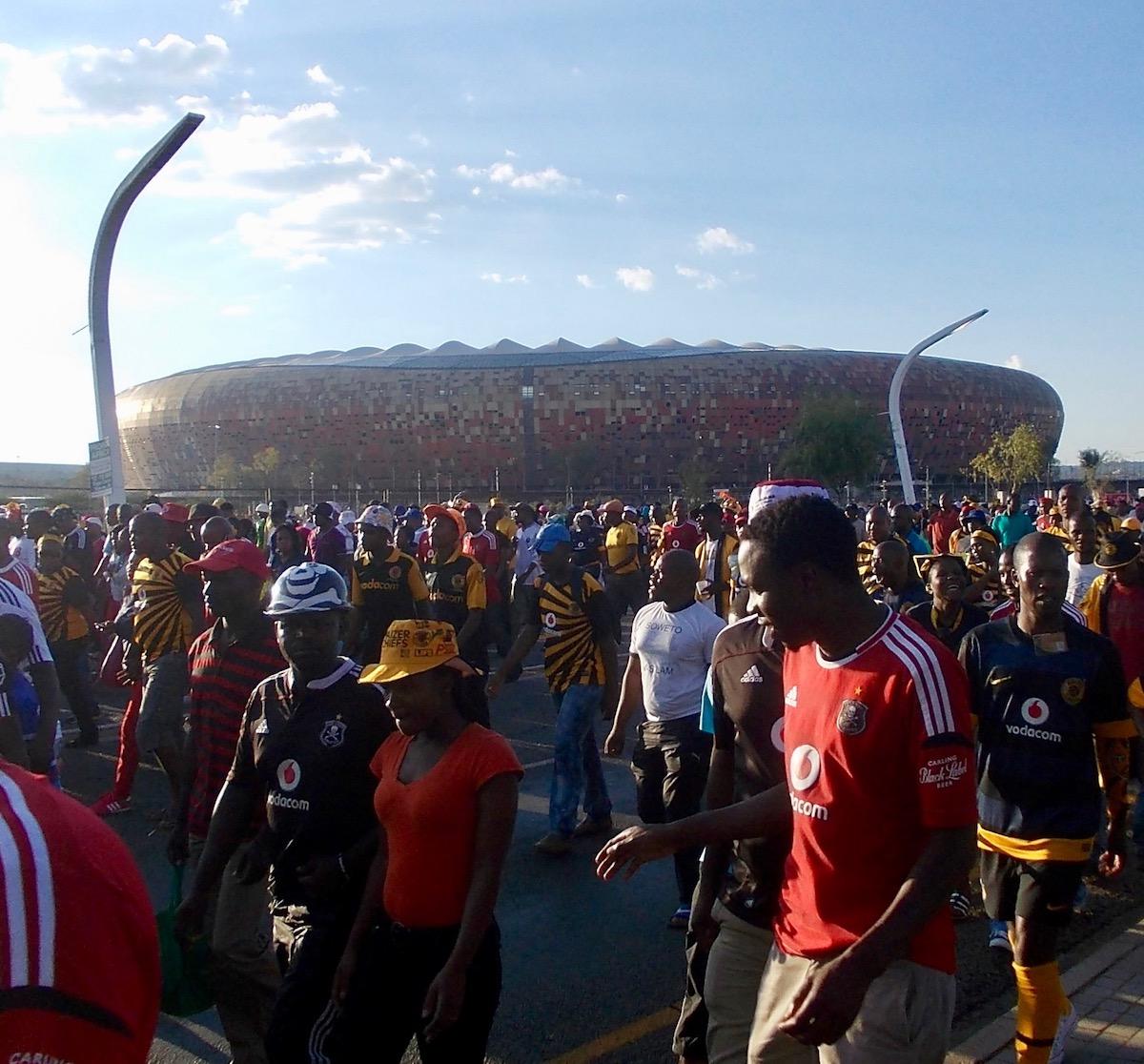 So, does it have aesthetics and design? Its large, rounded shape is created by means of thousands of glass-fibre concrete panels in eight different earthy colours, fitted together in a patchwork, and curving around into the cantilevered roof. Odd glazed panels punctuate this facade, allowing sunlight to stream in. 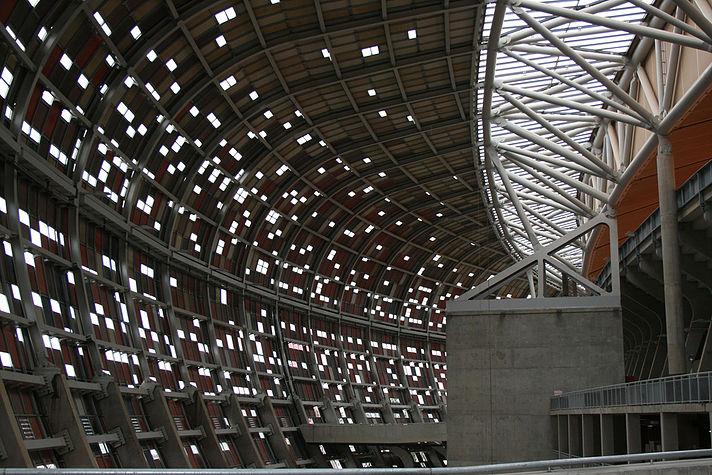 The panels are fitted together in a patchwork (Lucille Davie)

The 3-tier stadium soars 60 metres into the air, and stretches across 300 metres. At night when the lights are on, it takes on a fantastic glow, something almost extra-terrestrial.

It looks magical from a distance; it looks magical from inside, with its multiple shapes and colours soaring above your head in a curve, as you enter. Although it encases you in its roundness, that roundness is tempered by huge angled concrete columns and ramps on the inside, and although the concrete is dead and grey, the contrasting shapes are alive with design, enhanced by tall open spaces. 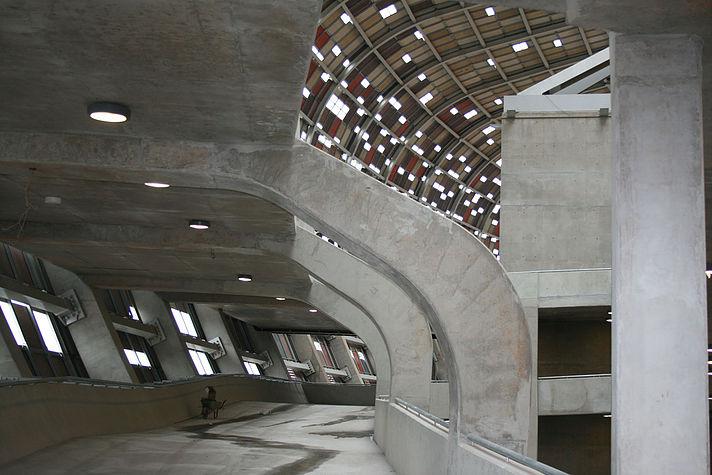 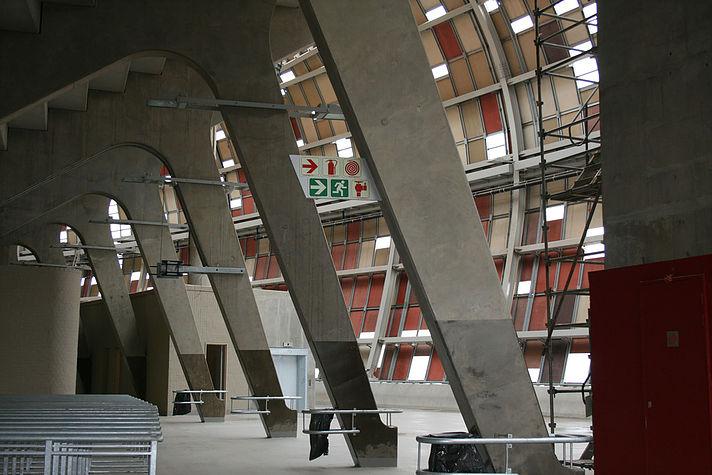 Van Bebber says that for him the design of the calabash has special meaning. “It symbolises people coming together, a melting pot of cultures, sharing and passing around the calabash.” And the world is going to be sharing from that calabash come June.

He says now, with the stadium almost complete and a truly splendid addition to Johannesburg’s growing list of African-inspired structures, that he is “very proud” of it. Construction will have taken three years – it started in February 2007, and will be complete in March 2010.

Sibongile Mazibuko, the executive director of Joburg’s 2010 unit, says the design of the stadium, in the form of an African pot on fire, “symbolises the unity of Africa”.

“There is something very cultural about it, it touches who we are,” she says.

World football body FIFA describes the stadium as “one of the most artistic and awe-inspiring football venues on the African continent”. 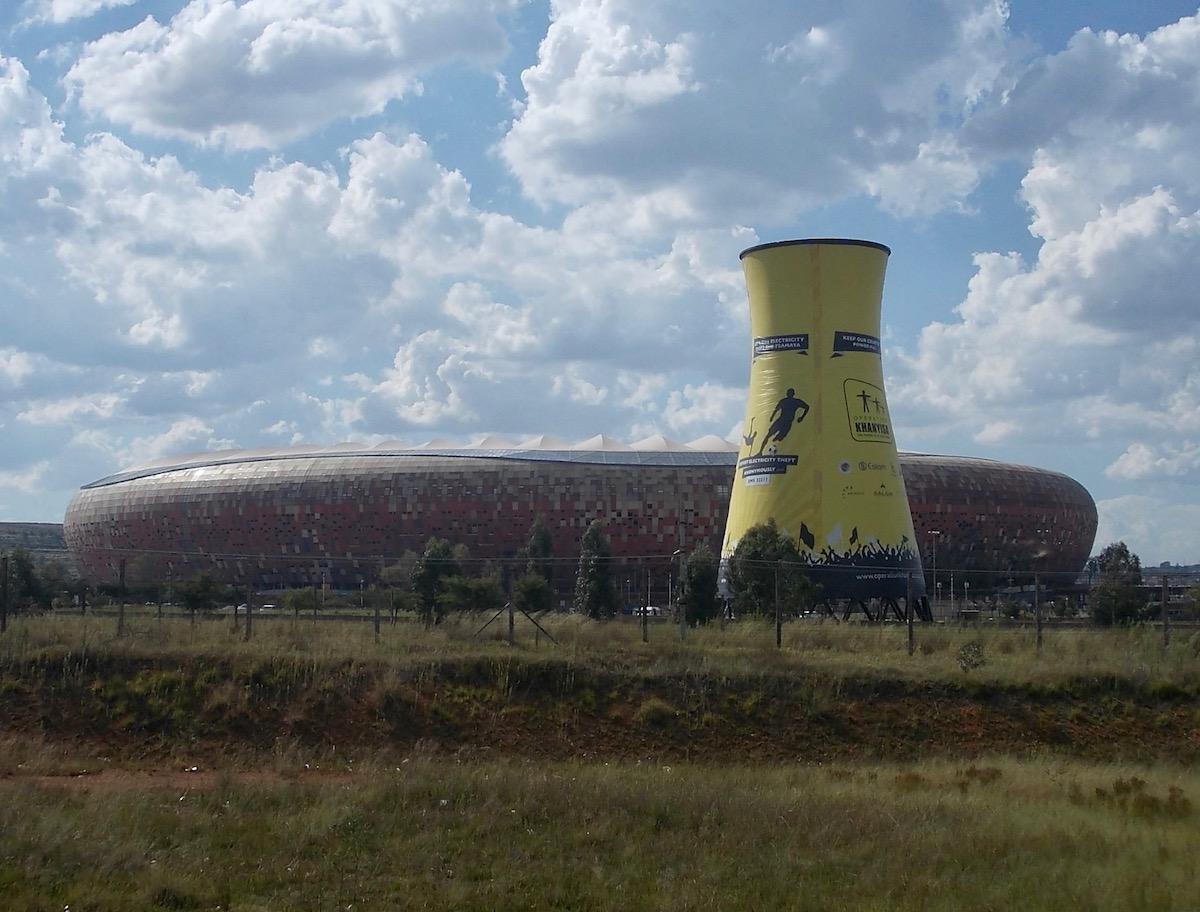 An awe-inspiring venue (The Heritage Portal)

Arguably the most striking of all the 10 stadiums, teams playing in the stadium are likely to be overwhelmed by the sounds of cheering and vuvuzelas coming from 88 851 people, the number of seats in the stadium. This is almost double the capacity of any of the other nine World Cup stadiums around the country. 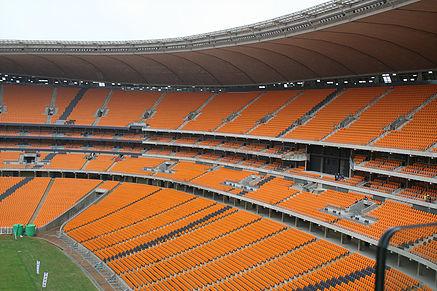 Symbolism has been built into the stadium. Nine vertical lines run through the seats and through the facade, aligning with the other nine 2010 stadia, as well as the Berlin Stadium, where the 2006 World Cup was held.

“These are representative of the road to the final, and it is hoped that, after the World Cup, the scores of each game at each venue will be placed in pre-cast concrete panels on the podium,” reads the statement. “A visit to the stadium will thus provide one with a full history of the World Cup and all its scores.”

The stadium has other significance too. In 1990 Nelson Mandela was welcomed back to his home town, Johannesburg, at the stadium that this one replaces. A funeral service was held for Communist Party leader Chris Hani, who was assassinated in Boksburg in 1993, in the old stadium.

Van Bebber is an architect at Boogertman Urban Edge & Partners. The company is ranked first in South Africa and Africa and 63rd in the world for 2008, according to the World Architecture Magazine.

The firm has been around for 25 years, with offices in Johannesburg, Pretoria, Durban, Cape Town, Dubai and Mauritius. Their designs range from hotels, shopping centres, office parks and showrooms, to industrial parks and homes and palaces.

They have picked up awards for the design of the Parktown Quarter, the Irene Village Mall, the Blu Bird Centre, and the Bigen Centre in Pretoria.

Van Bebber has previously been involved in the design of office towers, a beach resort in Dubai, retail developments, a parkade, sections of OR Tambo International Airport, and Emperor’s Casino in Benoni.

He had been working on a stadium design since 2001, believing that South Africa would win the bid to host the 2010 FIFA World Cup™. So when South Africa was announced as the venue for the 2010 world cup in 2004, the firm was asked for its design. It was a foregone conclusion.

Boogertman were ready with seven different proposals, among them a design acknowledging the city’s disappearing mine dumps; the kgotla, defined by the tree, of the African city state; the African map as a horizontal representation, with the roof of the stadium depicted as a desert plane set within the mineral wealth of southern Africa; and a representation of the national flower, the protea.

Van Bebber says that very little of the old remodelled FNB Stadium was kept. The old stadium had only one grandstand, on its western side, with the other three sides simply banked seats. All sides now have covered stands, with two levels of VIP boxes and suites running completely around the stadium. The moat and the curved geometry of the edges of the field have been retained. Van Bebber is particularly proud of the fact that all seats have a good view of the field.

The stadium has green-friendly elements. All lighting is energy efficient. Materials from dismantled sections of the old stadium were re-used. Water collected in the moat around the field is used to water the field, and excess water is used to flush the toilets. The flushing of the urinals is programmed, releasing water in tune to the use of the toilets. 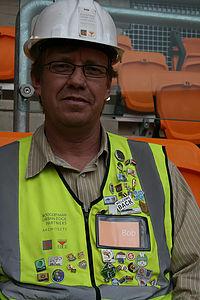 The budget and other stadiums

The major challenge has been making the budget stretch as far as it can, says Van Bebber. “But despite this, I think we have given value for money.”

The original budget started at R1,9-billion in 2007, and escalated to R3,3-billion by the end. Costs like materials, the scope of the stadium and import duties led to the jump in budget, costs felt equally by all the stadium construction teams.

Mazibuko agrees, saying that the City has got value for money in Soccer City, and that the investment was “quite justified”.

She is also pleased with the impact of the development on the surrounding neighbourhood, which is receiving an upgrade. A transportation hub and pedestrian mall is being constructed south of the stadium. The precinct will contain new roads, walkways, lighting, signage, landscaping, CCTV cameras and public amenities.

Boogertman brought in overseas stadium contractors Populous, despite not being required to. One person spent 3 to 4 days for six weeks working with Van Bebber’s team, fine tuning the design.

“It was amazing how much we had done right,” says Van Bebber. He admits, however, that building the stadium has been an “almost vertical learning curve”.

The Moses Mabhida Stadium in Durban cost R4,8-billion to build, whereas the Green Point Stadium in Cape Town cost R5,8-billion.

“Soccer City compares very favourably with the others, but we feel it’s ahead of the pack,” he says.

Standing with Van Bebber in the stands on a wet day, I suddenly became aware of a gentle roar. I looked around, wondering what it was, then realised: it was the rain flashing down on the roof.

A gentle roar seemed a good sound for this spectacular stadium. 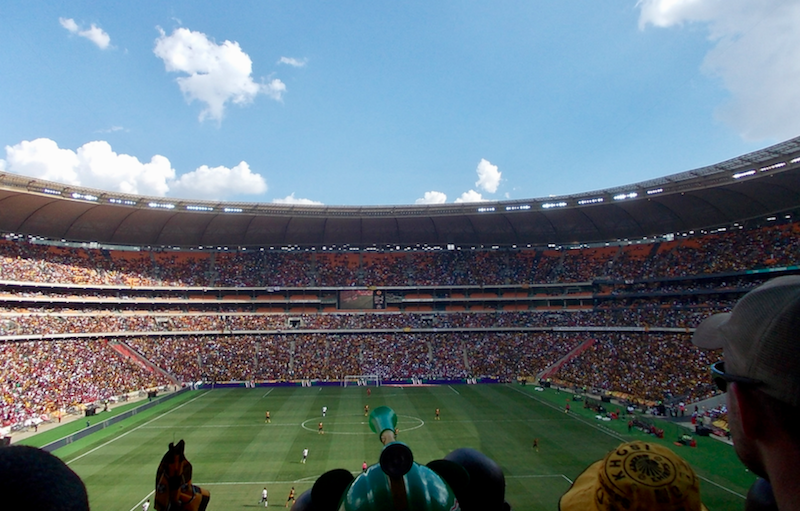 Inside Soccer City (The Heritage Portal)