The Royal Navy in Hermanus in 1961

Fifty five years ago Hermanus experienced its longest and most high profile contact ever with the Royal Navy. The famous aircraft carrier HMS Victorious officially visited the town for two incident-packed days that galvanised the whole population. 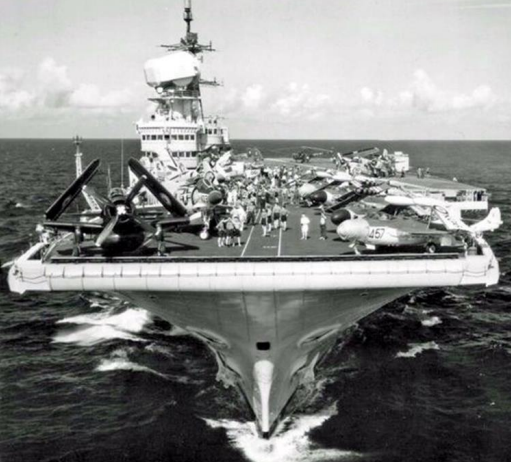 HMS Victorious was the most famous of all Royal Navy aircraft carriers in 1961 when she anchored in Walker Bay and most of her 2000 strong crew came ashore on two successive weekends for R&R. She was commissioned in 1939 and served in several key battles during World War II. Most notably, she provided air cover to other Royal Navy ships in the sinking of the German battleship, the Bismarck. She was thrown into this battle although not fully equipped and with only a quarter of her full complement of aircraft.

In 1941 and 1942 the Victorious accompanied many Atlantic convoys, especially a convoy to deliver much needed supplies to the island of Malta. She was also part of a convoy that landed 107 000 Allied soldiers in North Africa. Convoys continued in 1943, and in 1944 Victorious played a leading role in sinking the German battleship Tirpitz.

1945 found the aircraft carrier in the Pacific, attacking installations on Japanese held islands and on the Japanese mainland, before the War ended with the dropping of the atomic bomb. Sadly, five of the pilots operating from the Victorious were captured by the Japanese and summarily executed.

In 1945 Victorious became famous for quite different reasons. On her voyage back to Britain she carried over 600 Australian ‘brides’ to re-join their British husbands. This was in addition to 1000 crew members and the remaining aircraft. The ‘brides’ were Australian women who had married British men during the War and then remained in or returned to Australia ‘for the duration’, as people said in those days. In many cases the marriages had taken place a few days, or even hours, before the men returned to action and most of the women had never met their new in-laws. Several books have been written about this event (starting with “Swing by, Sailor” by Catherine Dyson [2007]) and the remaining war brides and their descendants maintain a website (click here to view).

In 1950 Victorious was put through the most far-reaching and expensive refit ever given to a Royal Navy ship, costing about 30 Million pounds sterling. The refit was only completed in 1958, so it was a brand new vessel that arrived in Hermanus in 1961, on a goodwill cruise to Singapore.

On 4 March 1961 the following article appeared in the Hermanus News:

The visit of H.M.S. Aircraft Carrier Victorious to Hermanus Tuesday afternoon was a memorable experience for the people of the town and district – White and non-White – about 4 000 of whom lined the cliffs from the Harbour to the Mossel River, to see the great ship - the largest ever to visit these waters. Many shops and offices closed for the afternoon to enable their staff to be present. At 3 o’clock the Victorious and her escort vessel the Blackpool could be seen through binoculars and at 3.30 by the naked eye rounding the coast from Cape Town. Promptly at 4 p.m. the stately ship arrived, standing about a mile out from the New Harbour. And three helicopters left the deck of Victorious heading for Hermanus.

They first flew over the town from Mossel River, one carrying the Royal Navy ensign, one the South African Navy ensign, while the centre one left its three companions to fly low over the pier at the New Harbour and delivered some packages. These consisted of some sailor’s kit (which) men (had) left behind at Cape Town, mails for the Admiralty, a pennant for the Hermanus Yacht Club, as well as a souvenir crest plaque from the ship for the Municipality of Hermanus.

In return, the helicopter, standing still in mid-air about eight feet above the breakwater, picked up a canvas bag from the Mayor of Hermanus (Cllr. F. J. Pope), containing a silver salver, suitably inscribed to rear Admiral R. M. Smeaton, Flag Officer on board the Victorious, from the citizens of Hermanus.

Soon after the presentations, a local perlemoen diver, Mr. Gerrie Lotter, who was watching events from his dingy in the harbour, overturned his boat in the excitement and the helicopter went to his aid, unnecessarily, as Mr. Lotter was assisted by friends. The helicopter flew over the Harbour doing a life-saving exercise, dipping one of her crew in the water. 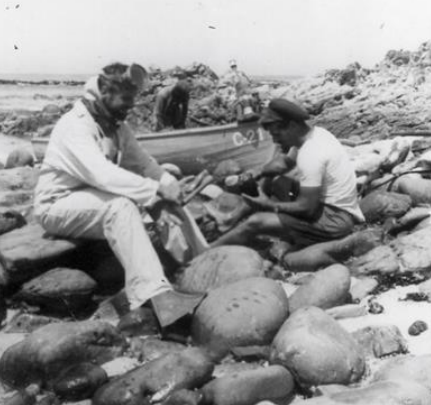 The three planes then circled over the town once more in formation, waving farewell to the crowds, and returned to their ship, which by then had encircled Walker Bay passing Gansbaai, and was on its way up the coast, cheered by the enthusiastic crowds. It was all over by 5 p.m. Sailors from the H.M.S. Victorious had two very happy week-ends in Hermanus.

The Rotary Ann’s who organized these week-ends, wish to thank all hosts and hostesses who gave the men a week-end of family life and the hotels who offered limitless accommodation. They also want to thank all the people who gave money to pay for the buses to bring the men to our village. There were families who could not provide accommodation, but took the men from hotels into their homes and entertained them.

In order to round out the story, I went looking for anyone who had been present. It was a pleasant surprise to find that Gerrie Lotter still lives in Hermanus in Albertyn Street, in a house he bought in 1970 for R490. He recalls the day very well, and is quite adamant that he did not require assistance at any time. He was an abalone diver by profession and quite at home on and in the water.

I then approached Don Kearney, Senior Manager, Hermanus Administration, and he was kind enough to conduct a search for the ‘silver crest plaque’ that the Commander of the Victorious gave to the Municipality. He found it in a box of older memorabilia that had been removed from the appropriate cabinet to create space for the many awards the Municipality has received in recent years. I was able to arrange for it to be photographed for the record. 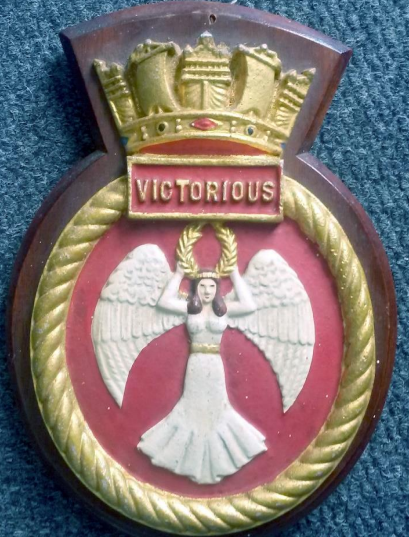 In the same box we found a plaque from the HMS Jaguar, presumably also given to the Municipality in commemoration of a visit. The Jaguar was refitted in 1969 and her records reveal that the first cruise she undertook was to South Africa. The plaque probably was handed over during that cruise in 1969- 1970. 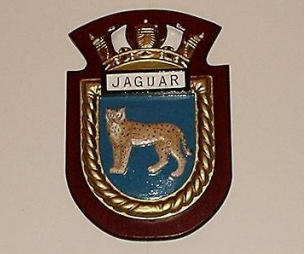 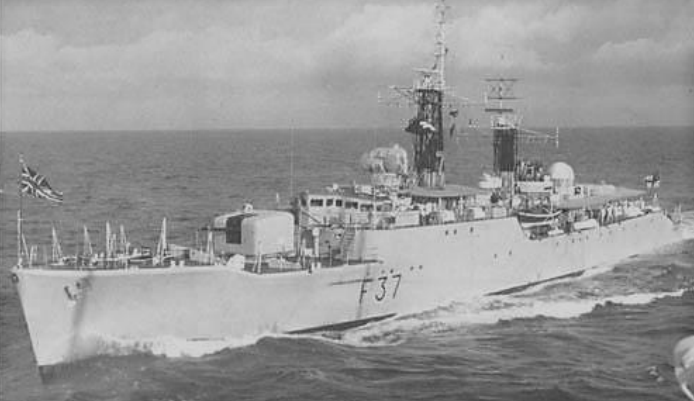 Research into Hermanus’s history continues to generate interest, as our location and contacts link us to world events. What appears to be a purely local affair turns out to connect with several important naval battles, an unexpected, touching aspect of WWII and a nearly-forgotten artefact in a cardboard box.

Dr Robin Lee is a retired academic and founder member of the Hermanus History Society which is dedicated to the identification and preservation of heritage sites in the area.