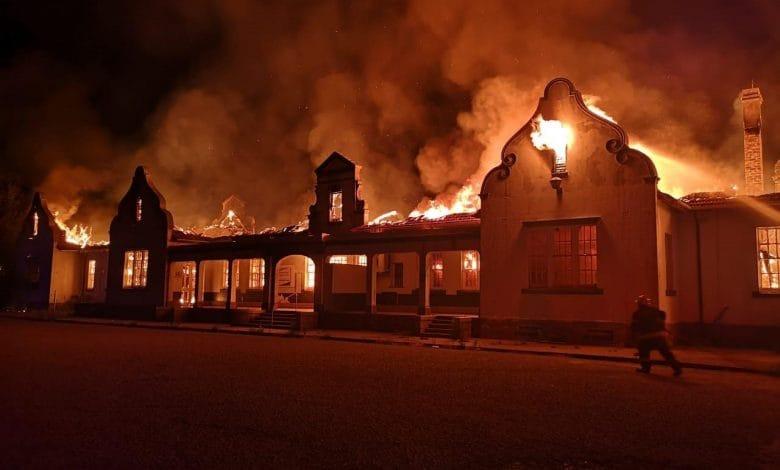 This article first appeared on Lennie's personal blog on 20 September 2020. Click here to view. The main photo was taken by Lize Botes on the night of the fire.

The Potchefstroom railway station was destroyed by fire during the night of 19 September. This is a mere month after the General’s House, a declared historical building, succumbed to the same fate (click here to read more). The current station building was opened in 1919. It was once regarded as the third best railway station in the British Empire for its architectural features and beautiful lay-out.

According to the Potchefstroom Herald, the fire was noticed by a security guard who saw flames coming out of the roof by 23:00. The fire brigade was immediately notified, but when they arrived on the scene, the roof of the building had already caved in. The fire was extinguished by 00:20 but the building was destroyed by then.

Potchefstroom Railway Station goes up in flames via social media.png 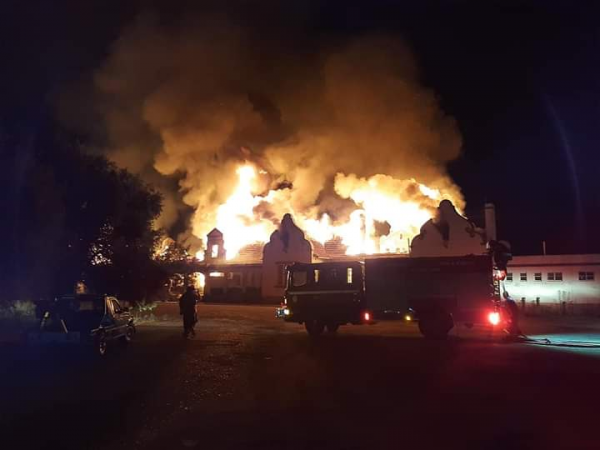 The Potchefstroom station used to be one of the grand old buildings of the city built in the Cape Dutch style. It is the second railway station of Potchefstroom and was in use since 1919.

This history of the railway in the Transvaal is very closely connected to two factors – the strained diplomatic relationship between the Zuid-Afrikaansche Republiek and Britain as well as the heavy burden that goldmining at the Rand placed on the poor and outdated road system.

In order to establish a rail connection to Lourenco Marques (Maputo) in Mozambique, to counteract the railway line from Cape Town via Mafeking to Rhodesia (Zimbabwe), the Nederlandsch Zuid-Afrikaansche Spoorweg Maatschappy or NZASM was created. Sympathetic investors from the Netherlands helped to fund the company.

After completion of the Mozambique line, the railway was extended from Johannesburg to Krugersdorp to serve the mines. The line to Potchefstroom and Klerksdorp was planned, but not with the same enthusiasm as the previous projects.

Reasons given to build this line was that Potchefstroom was the former capital and an economic boom would justify it. The line could also serve to convey agricultural products of the Free State via Kroonstad and Potchefstroom to the Johannesburg market.

The Dutch board of the NZASM was not optimistic that this southwest line would be economically viable and gave its permission to have it built on condition that the government of the ZAR should fund the costs of £748 000. With backing of £200 000 of the Rothschild Organisation of the USA the project could be undertaken.

In August 1893 the Volksraad of the ZAR decided to commence with the project. The contract to survey the line was given to the Potchefstroom surveyor, JFI Curlewis, in association with a Mr Godfrey. Surveying was completed in October of 1894.

According to the initial survey the railway line would, immediately after exiting the station, run over the remnants of the old Potchefstroom fort, where about 300 civilians, consisting of British soldiers and a few individuals, were besieged for three months, from December 1880 to March 1881, by Boer forces during the First Anglo-Boer War.

President Paul Kruger personally intervened to prevent the defacing of the fort. The result was that the curve in the railway line was moved to go around the fort, which made the curve much tighter. When the line was later electrified, this caused immense problems for the electrical installation.

Building of the 156 km from Krugersdorp to Potchefstroom started in July 1895, but was slowed down due to a lack of labour and the outbreak of the Runderpest (click here to read more).

In January 1897, shortly after the Jameson raid, the line reached Potchefstroom and in August it reached Klerksdorp. The government donated £50 to fund the festivities to inaugurate the line.

Apart from the station at Potchefstroom the complex around the station also included a goods shed, maintenance workshop and houses for the staff.

Plans for the first station building shows that it included a waiting-room, baggage room, offices, a special waiting-room for ladies, toilets and accommodation for the station master. 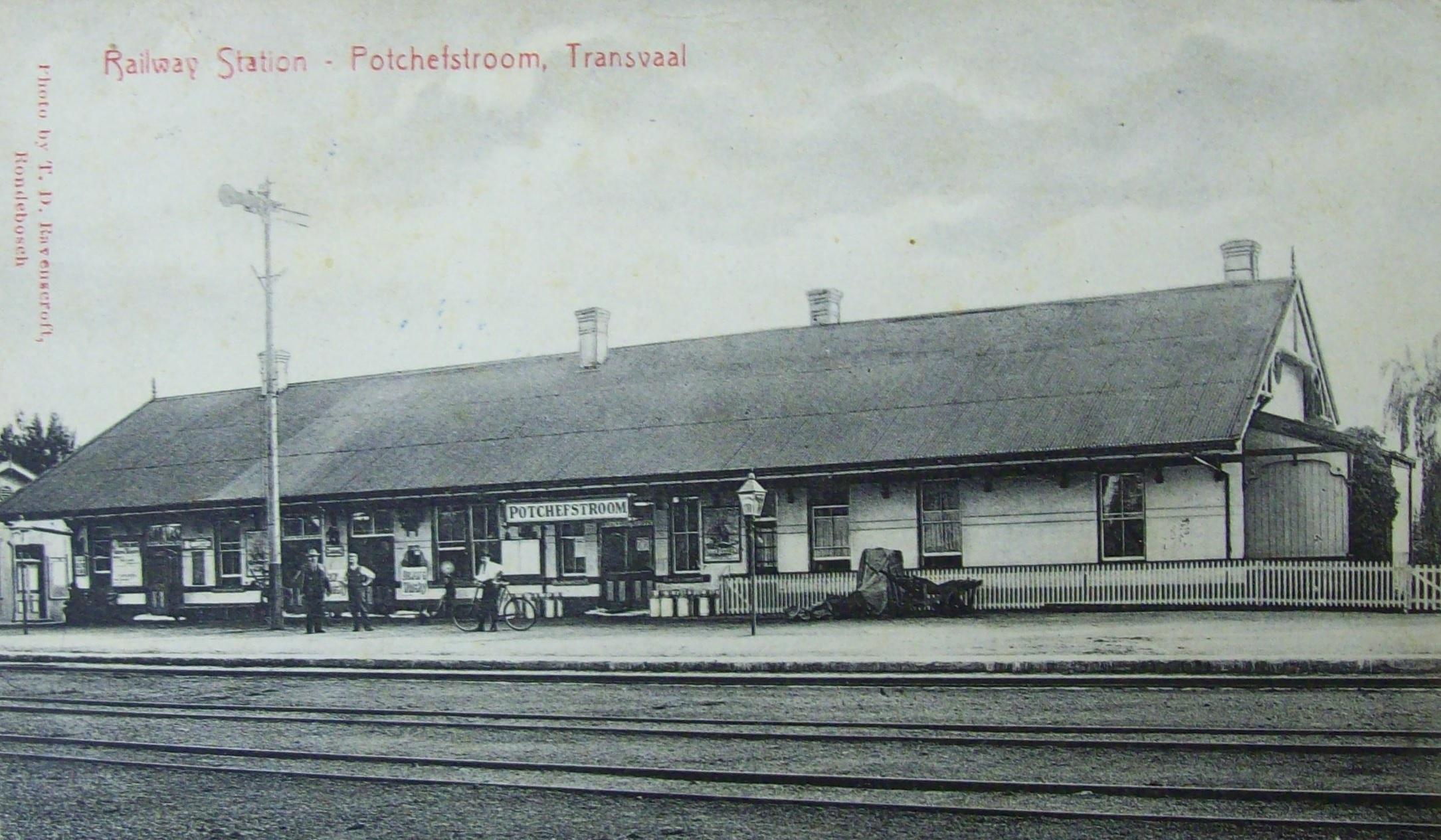 The first railway station of Potchefstroom was built in 1897 when the railway line between Krugersdorp and Klerksdorp, via Potchefstroom, was opened (Potchefstroom Museum)

The old railway station of Potchefstroom was the scene of many imported occasions. One of the most memorable was the arrival of the Olympic marathon champion, Kenneth McArthur. McArthur won the marathon at the Olympic Games in Stockholm in Sweden in July 1912. His arrival in Potchefstroom in September is described in my biography on McArthur:

Even though the train was hours late, nothing could dampen the ecstatic welcome McArthur received at his arrival in Potchefstroom.

Joey McArthur (McArthur’s wife) later remembered that they waited at the station since one o’ clock. Large crowds started to gather at the station at five o’clock expecting the train at 5:30 pm. Photographers and cinematographers were commissioned to photograph and record his arrival.

The ‘marathon’ wait for the train only ended when it arrived, hours late, after 8 pm after it was delayed at other stations where crowds wanted to meet South Africa’s brightest sport star.

This did not dampen the crowd’s enthusiasm. The whole town came out to welcome the hero and only those that were severely ill did not attend.

“The home-coming of Kennedy K. McArthur was marked by remarkable scenes of enthusiasm which were certainly unprecedented in Potchefstroom and probably unique for South Africa.” (Herald 6-09-1912)

An honour guard of 96 boys of the Orphanage Cadet Company and the band of the 12th Royal Lancers played on the platform. Amongst the groups there to welcome him was “flannel clad natives representing the location athletic club”.

It was estimated that at least 2 000 people had gathered on the platform and in the immediate vicinity of the station. The train, which was “brilliantly illuminated,” steamed in at 8:15 p.m. under the tune of “See the conquering hero come”, played by the band.

Unfortunately no photos of this joyous occasions exist due to the late arrival of the train. A cinematographer was hired to record McArthur’s arrival, but due to the lack of light at the late hour was unable to shoot any footage. 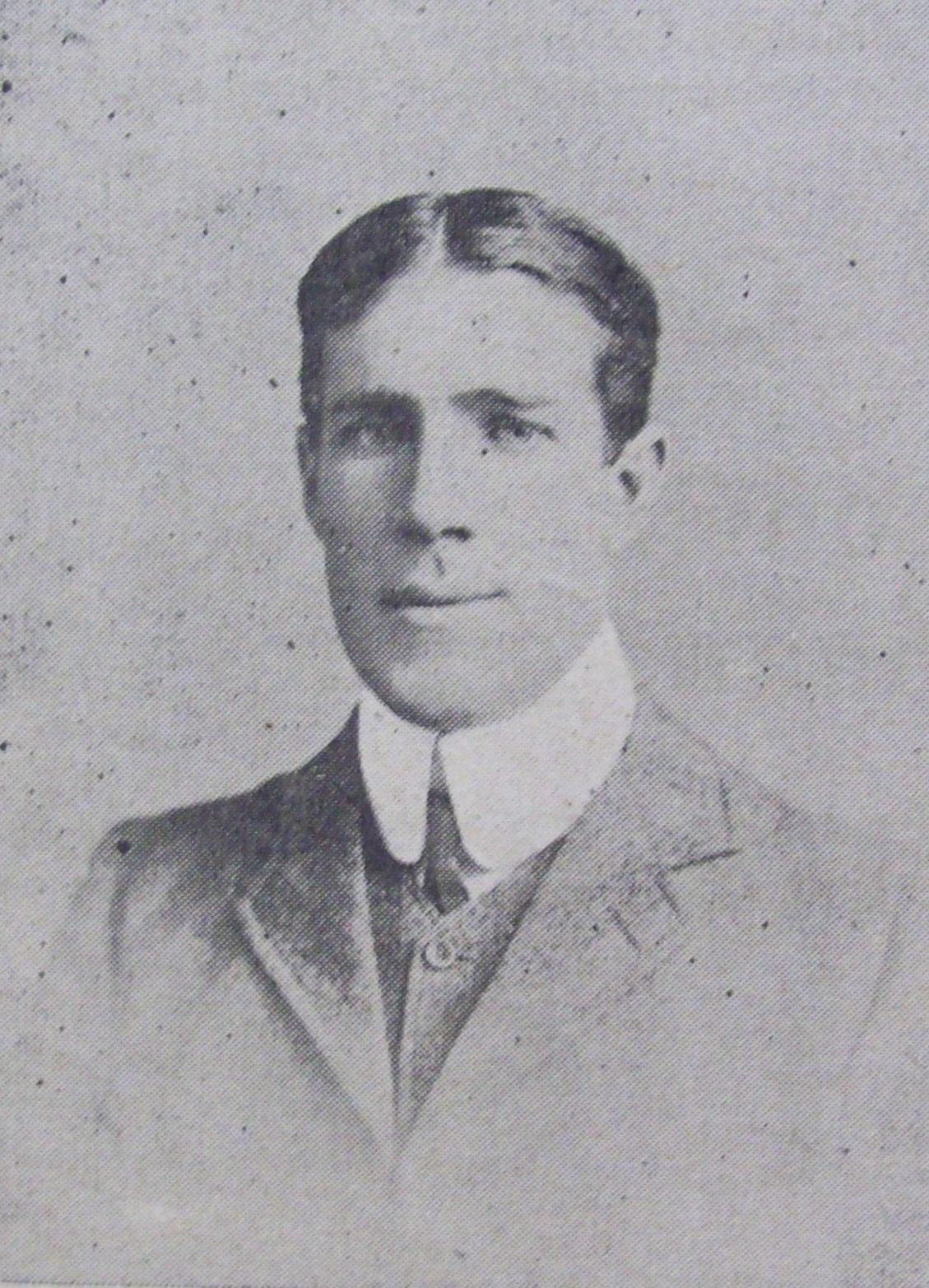 The arrival of the Olympic marathon winner, Kenneth McArthur, at the station on 4 September 1912 was a momentous occasion. It is said that about 2 000 people congregated there to meet him. Only the severely ill did not attend. (Potchefstroom Herald) 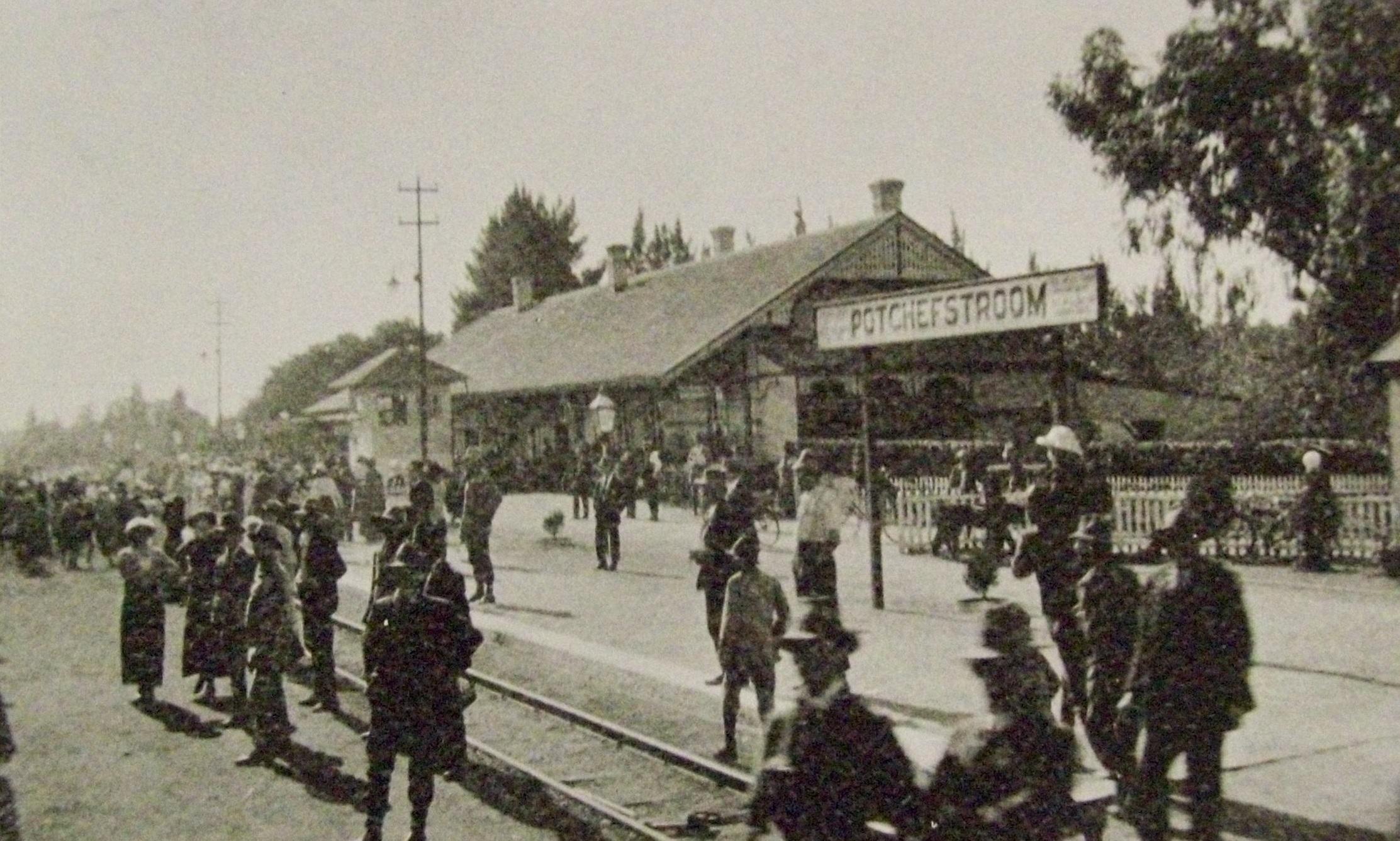 Due to an economic boom directly after the Second Anglo-Boer War and the influx of British soldiers stationed at the Potchefstroom garrison, the old station was soon inadequate. The Chamber of Commerce agitated for a larger station building. In November 1916 the Chamber brought this matter to the attention of visiting dignitaries and it was soon announced that the old station building was to be replaced.

In 1918 the foundation stone of the station was laid on May Day (1 May) by Lieutenant Colonel Creswell Clark, CMG, OBE, VD, the assistant general manager of Railways and Harbours. There was no official opening ceremony when the building was completed. Jenkins wrote: the building is most distinctive for a railway station and in the time of Stationmaster WU Garden, it won third price for railway stations in the Empire for its architectural features and beautiful lay-out. 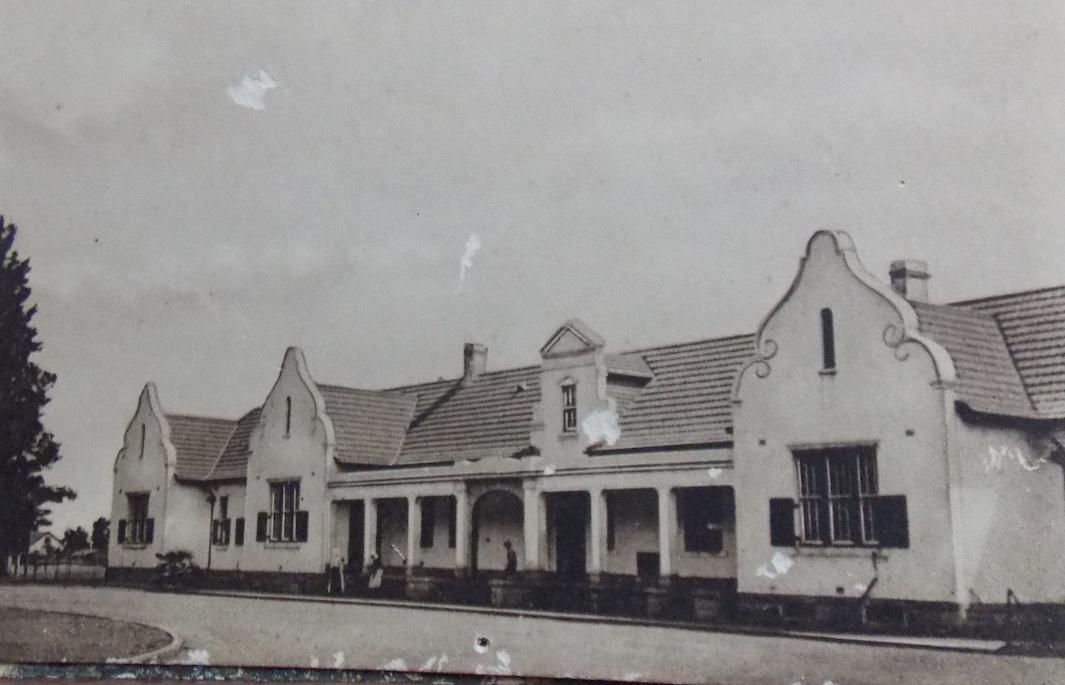 The new Potchefstroom station was built in 1918 and came into use in 1919. It was built in the Cape Dutch style and won third place in a competition for railway stations in the British Empire for its architectural style. (Potchefstroom Museum) 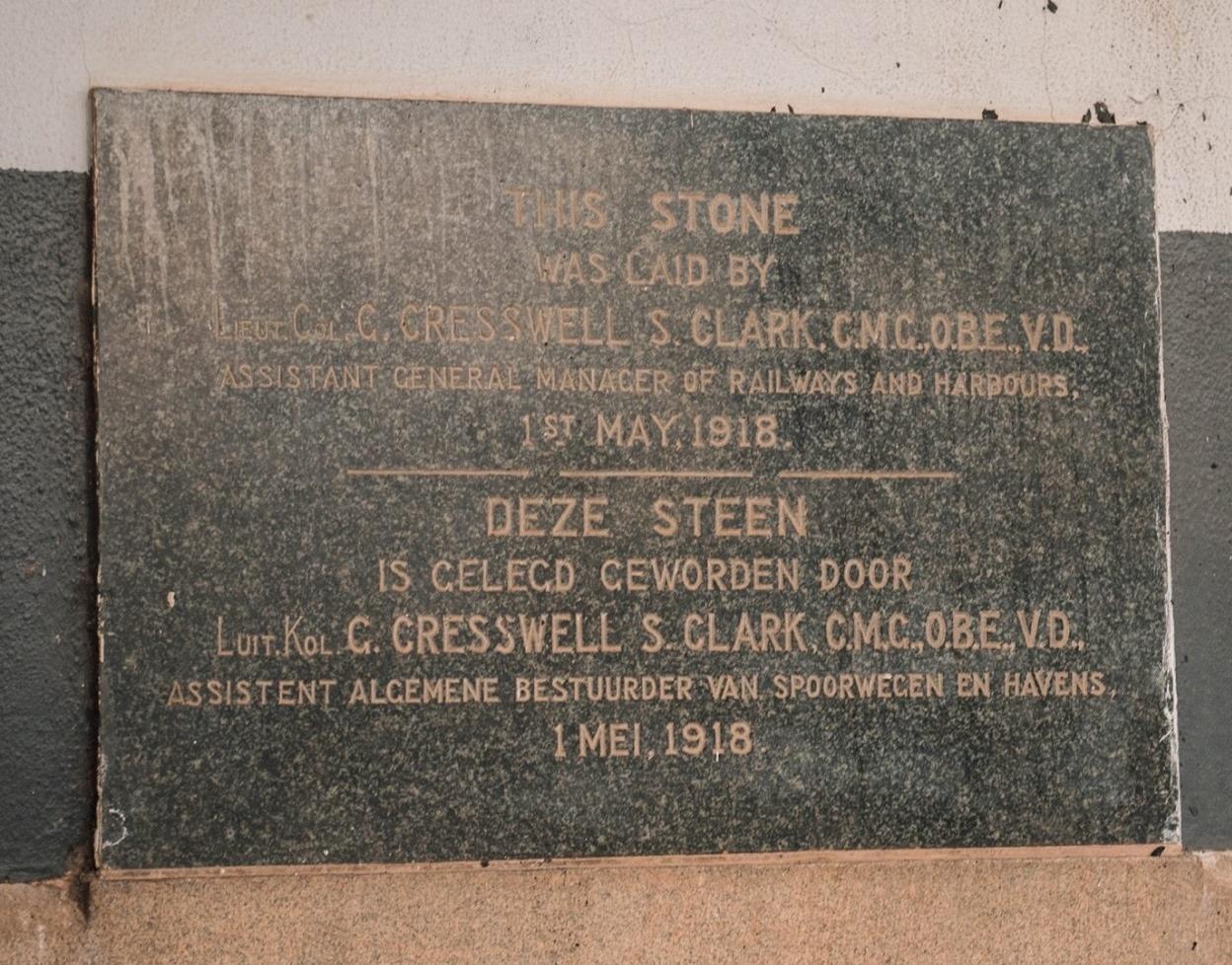 The foundation stone of the railway station survived the fire. (Aldus Smith Photography)

In May 1961 representations were made, which led to the enlargement of the station building. This was due to the large quantity of baggage that needed to be stored during school holidays. When the State President, Adv CR Swart travelled to Cape Town, he was received at the Station on 2 June 1961. Many people gathered at the station. It was said that the “curiosity was overwhelming.” 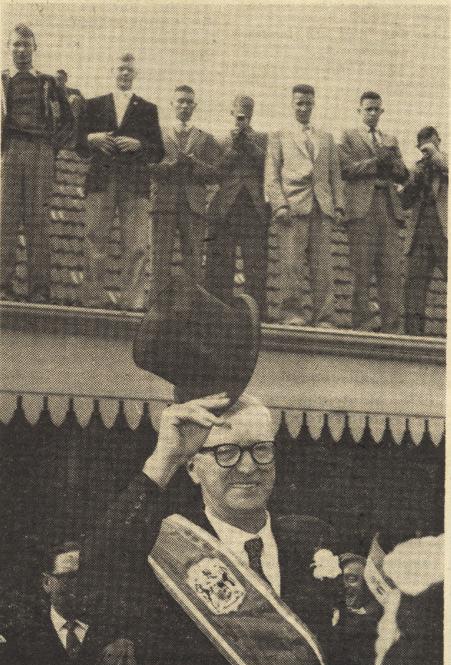 After the mayor of Potchefstroom had urged the residents of Potchefstroom to greet President CR Swart at the station when he passed through on his way to Cape Town, large crowds arrived. The Herald reported on 9 June 1961 that there were fears that the roof of the building could cave in under the weight of the people who stood there to see the president. (Potchefstroom Herald)

The Potchefstroom station served the town – and later city – well. In the Herald’s article on the fire that destroyed the building, it is said that in a previous article on the station on 28 July 1987, a staff of 441 worked at the station. Between 96 and 125 trains passed through Potchefstroom daily at the time. The staff daily received parcels weighing a total of 297 kg as well as 180 letters.

According to Transnet’s schedule the Shozoloza Meyl currently passes through Potchefstroom in the both the direction of Johannesburg and Cape Town on Fridays and Sundays. This is apart from freight and other trains.

As with many public buildings in Potchefstroom, the railway station suffered much neglect in recent years. Again Potchefstroom has lost one of its grand old buildings, but it was not only due to the fire that finally destroyed it. Decay and neglect set the scene for a disaster to happen.