A mysterious grave next to a railway line

On the road from Reitz to Bethlehem (R26) in the Free State one crosses over the railway line about 10km out of Bethlehem. Inspecting the area under the bridge one finds a grave next to the rails a few meters from the bridge. It is marked by some upright railway sleepers, totally overgrown and with a largely illegible gravestone. I could just make out... ‘Nov 1931’.

Who is buried here? And why next to the rails, not in a cemetery?

The person laid to rest here is Cornelius van Heerden, aged 22 at the time of his death. He was what we nowadays would call a troubled youth. At the beginning of November 1931 he had been in court charged by his father for theft by conversion. He received a suspended sentence due to his age and being a first offender. Earlier in the month he was fired from his job with the railways for absenteeism and the day before the incident he was in court on a charge of negligent driving.

He lived with his parents at Bethlehemspoort, about 7km out of town. On the morning of the 26 November he went into town and bought ammunition. On his return he announced to his brother that he was going out to do some shooting.

First, as reported by various sources, he went around the neighbourhood asking for Dawie Viljoen who was farming nearby. It is speculated that he wanted to kill him because he laughed during an incident when van Heerden fell off a ladder. Not being able to find him he went to the road, stopped a passing car and shot the driver. This was John Edward Darby, a commercial traveller from Natal.

Pushing the body over to the passenger seat he turned the car and moved towards Bethlehem. On the way he took shots at arbitrary groups of people including a gang working on the railway. He was apparently looking for his father, who was working on the rails, with the intention of killing him. He couldn’t find him. On the way into town on what is now Lamond Road he threw out his purse containing the suicide notes he had prepared the previous day.

The next victim was Roy Michael Prinsloo and his labourers who were busy planting trees. He killed Prinsloo and wounded two of his workers. A forensic investigation indicated that Prinsloo was shot at close range. 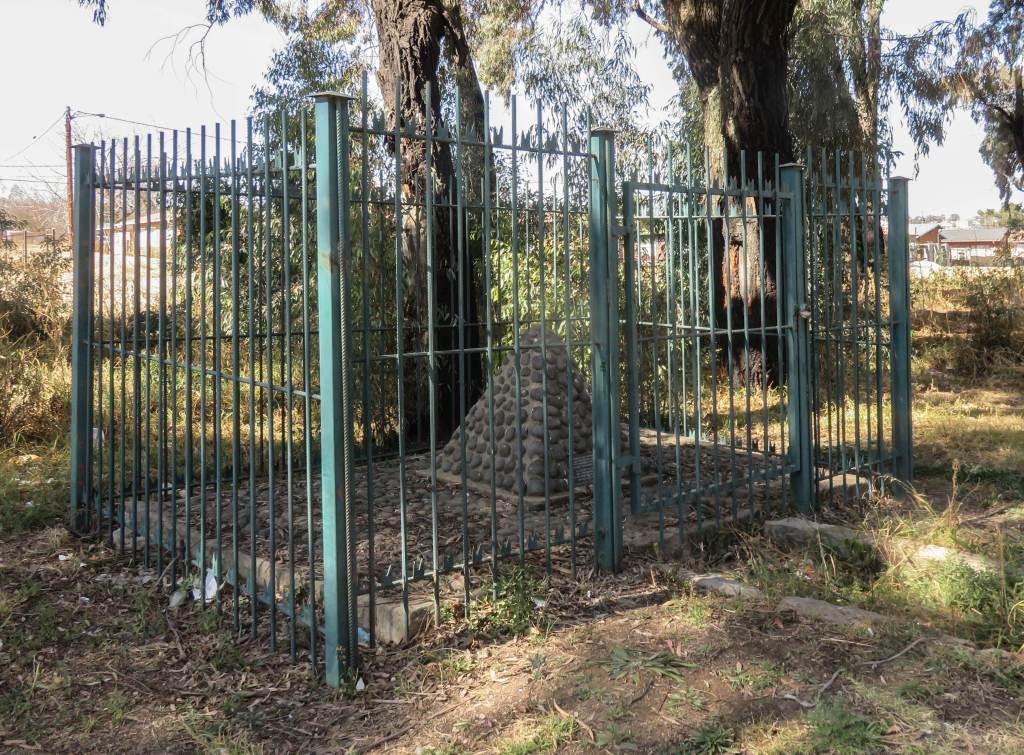 By this time the police had been informed of events and went in pursuit. Van Heerden made a run for it. At Liebenbergsvlei he got trapped by a flooded river and when the police approached the car he shot himself.

The final count was 5 dead including van Heerden and 4 injured. During my research I could only find the names of two of the killed. That was Edward Darby and Michael Prinsloo; a Boer war fighter who rose to the position of general and was in charge of the Northern Free State towards the end of the war.

The place where Prinsloo was killed is now marked by a cairn (see picture above). The trees behind the monument are the trees planted by his work team. The inscription reads: “at this spot the Boer hero Genl Rooi Michael Prinsloo was shot dead by a mentally disturbed person on 12 November 1930”. I disagree with the date given. 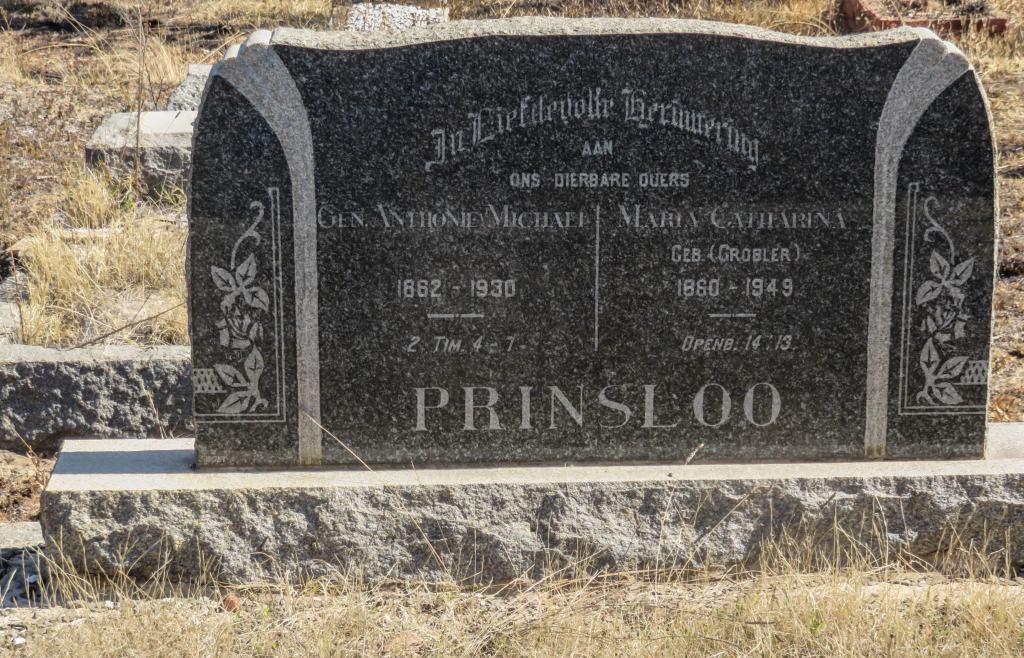 Prinsloo was laid to rest in the old cemetery in Lamond Rd. The funeral was a major event with more than 3000 people attending. The gravestone states: 'Gen Anthonie Michael, 1862-1930; 2 TIM 4-7; Prinsloo.'

Here again the year is given as 1930. All the other references and van Heerden's gravestone give the year as 1931. The most convincing evidence comes from some newspaper cuttings with the date of issue on the clip. The date of 12 November on the cairn is also in doubt. All the references consulted state that it was the 26 November.

And when it came to bury van Heerden the town's people refused to have his body in their cemetery. Some arrangement was made with the railways whereby the body was buried next to the rail far out of town. Being interested in these things I wondered what sort of bible verse would be put on the gravestone of a murderer. I can make out at the bottom of the stone: Joh 14 V 1, that would be John ch 14 verse 1, which reads in the new international translation: "Do not let your hearts be troubled. Trust in God; trust also in me". I think this is a fitting verse for the circumstances.

The map below is an extract from a 1:50 000 topographic map. It shows the positions of events connected to this crime. 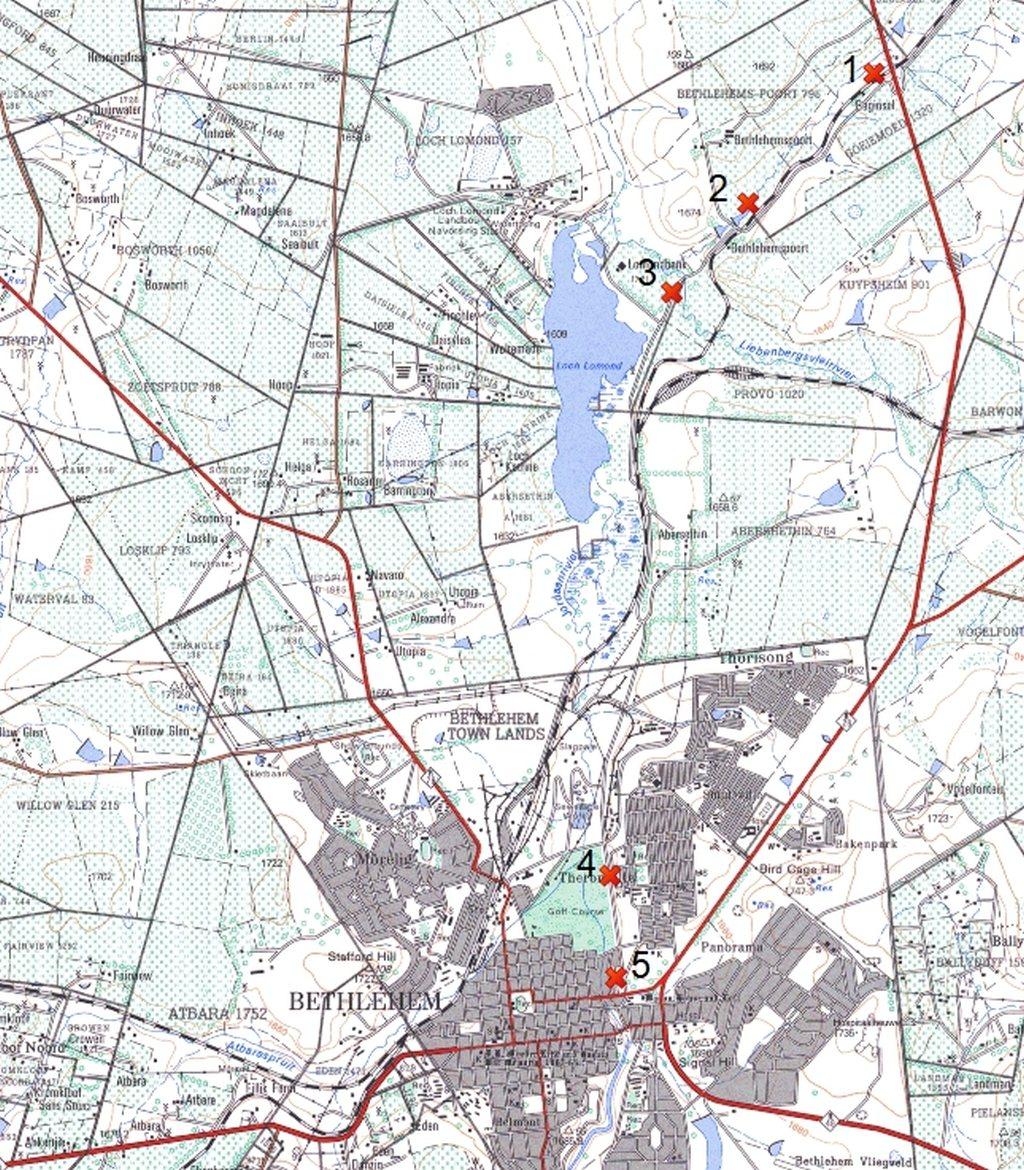 A big thank you to Pieter Olivier from the Bethlehem Museum for taking us to the places of interest, to Piet Lombard for the help and companionship putting this article together and to Nico Moolman for pointing out the existence of the grave next to the railway line.