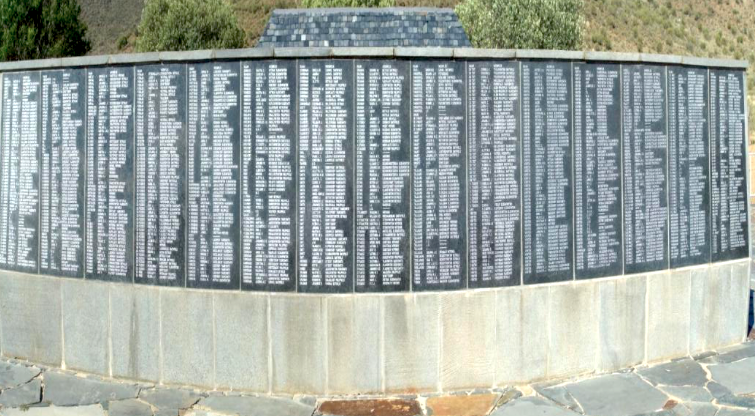 A few years ago, I needed to write my memoir to understand myself but as my mother had had a great effect on my childhood and the person I became, I realised that that was where I should start. However, it soon became apparent that her childhood was the reason for who she became. So perhaps I needed to start with my grandmother, who died when my mother was eleven years old. But I didn't even know my grandmother’s name!

‘My Mother’ I came to realise was the only name I had ever heard for my grandmother, when mentioned by my late mother. Grandmother had died giving birth to twin boys and they and another boy of 2 years-old, my mother’s half-brothers, were the only family she had. There was a step-father who died not long after that. As an English-speaking South African, this was how my journey to the ‘other side’ of the Anglo Boer War began.

Something I have come across quite often in my recent reading of South African history, is mention of racial-conflict and I am always surprised to discover that this means between the Boers and the British. It explains now why I always felt, growing up in Pretoria in the 1940s, that the Afrikaans speaking children seemed to hate me. It might also explain why my mother did not tell her children that her mother had been from a Boer family, withholding her name and any information she might have had, on what her mother experienced during the war. She appears to have made a deliberate decision to bring up her children as British (my father was of Scottish descent).

Research was fascinating. Understanding the full implications of the Boer War was distressing. The cemetery seemed like a good place to find my grandmother’s name, but this was not the case. I found it very strange and sad that even on her gravestone, she did not have a name or identity. 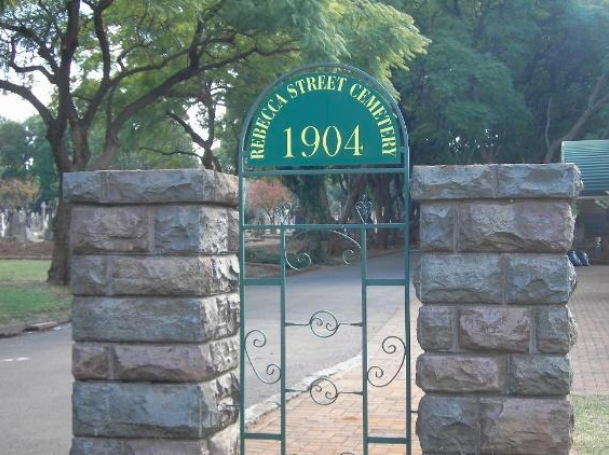 I then contacted St Ursula’s Convent in Krugersdorp, where my mother had been a boarder and I was surprised that after all that time, they could send me a copy of the admission form – signed by her mother Johanna Catharina Kruger, who worked for the Rand Steam Laundry. Nothing I had ever heard had prepared me for the fact that I have Kruger blood.

My research was extensive – genealogy sites – the internet in general - with no success. It also extended to the National Archives. I then heard of Barry Kruger, a keen researcher of the genealogy of the Kruger family and he was eventually able to refer me to the amazing database produced recently from the British records (click here to view). All the information of those who were in concentration camps during the Anglo Boer War, is recorded in detail. The British it seems were meticulous in keeping these records, even the causes of death of each of the many thousands who died in the camps.

Once Barry and I were on the right track, the pieces started to fall into place, as his database could track the information. His extensive collection of Kruger family records was a great asset and I appreciate all he did to assist me.

The sheet below gives the relevant information of my great-grandmother. I have similar sheets for her husband and children. Data can be sourced using the name of the person, the name of the camp, the district they came from, et cetera. 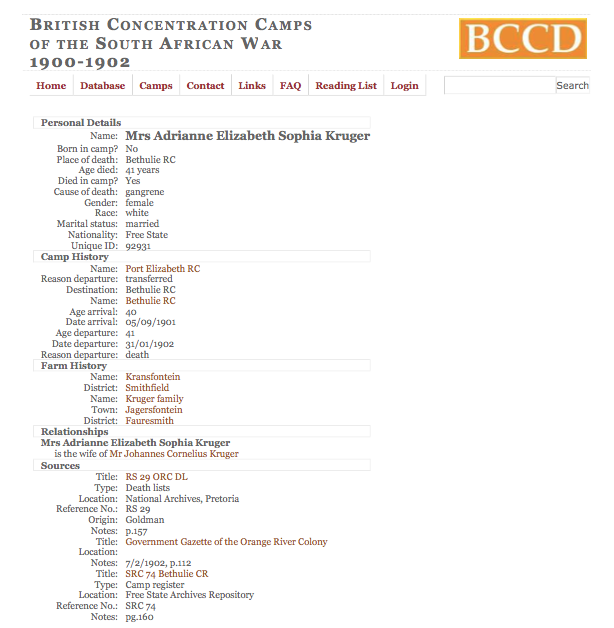 Datasheet for my great-grandmother

Johanna Catharina Kruger, my grandmother, was born on 4 May 1896, in Jagersfontein in the Orange Free State. Her father Johannes Cornelis Kruger was a farmer and a miner when war broke out, on 9 October 1899. Johanna was the youngest of three daughters. It is her mother listed above.

The grandmother I never knew was rounded up in Jagersfontein aged three, together with her pregnant mother and two sisters and sent to Uitenhage/Port Elizabeth, in a cattle truck on a train. Her father was sent to the Green Point Prisoner of War Camp. My research indicates that this was not part of the scorched-earth policy that was introduced by Kitchener in March 1901. The newspaper cutting pictured below, dated October 1900, and other information I have, confirm this. It was in Uitenhage that great-grandmother Adriana Kruger (born van den Heever) gave birth to her son Pieter Ernst, on 15 January 1901. 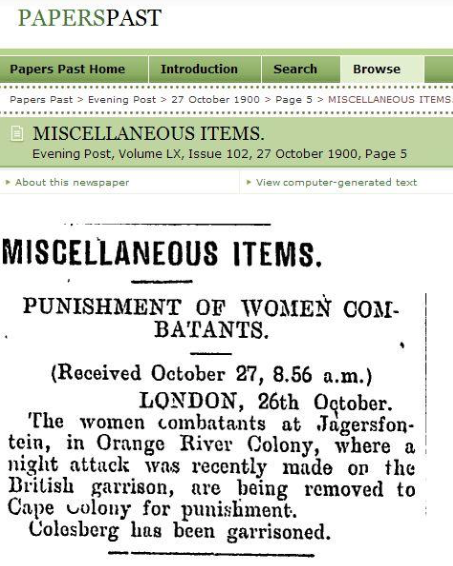 The records show that in June 1901 Johannes Kruger, was transferred to the Bethulie Concentration Camp in the Orange Free State and obviously applied for his family to join him there. It seems he might have signed an Oath of Neutrality.

The 40-year-old Adriana arrived from Port Elizabeth with her four children, in September 1901. This was a fatal mistake. When Johannes left the Bethulie camp at the end of the War, he left behind the graves of his wife, his eldest daughter, and his son. He took with him his 8-year-old daughter Sophia and the 6-year-old Johanna.

The wall in the main image above records the names of half of the 1800 people who died there. The other half are on the other side. Even though I did not know I had this family until recently, it was still a chilling experience to read the three names on the wall and to hear of how, of all the camps, this was referred to even by the British as the ‘Hell Camp’.

The English Monument built on the site of the camp is the only monument in the country paid for by Britain to commemorate the victims of the concentration camps. On the site of this monument, remains of gravestones are visible. There is a pile of rocks which were removed from the original graves when the remains of the bodies buried there, were re-interred at a Memorial Camp Cemetery nearby. The relocation of the graves was necessitated by the building of the Gariep Dam on the Orange River, as the dam was expected to flood the original cemetery. 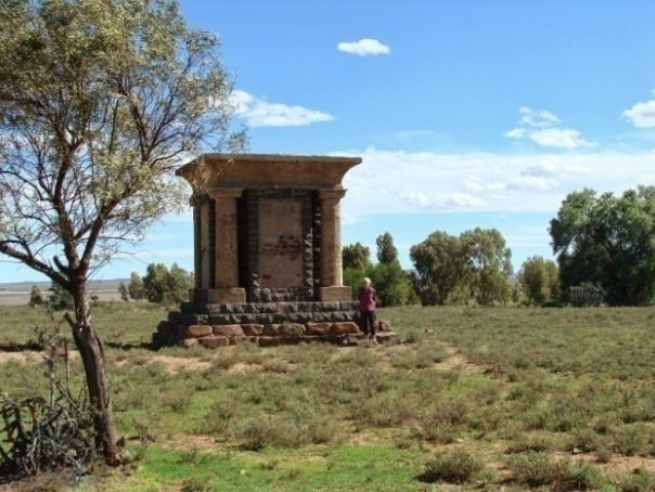 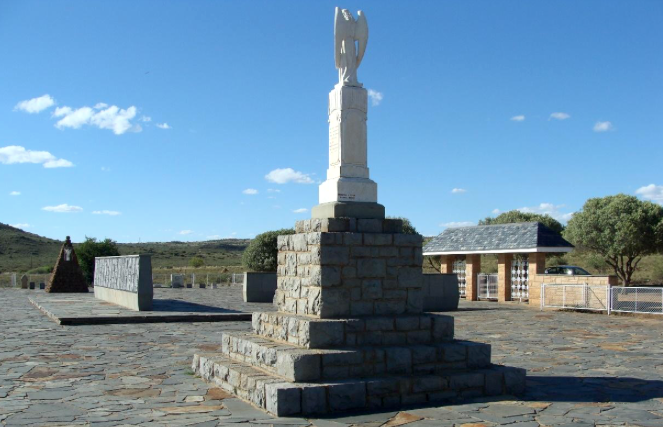 Grandmother Johanna left the camp after the war aged six - she surfaced again in Johannesburg/Benoni when she gave birth to my mother in 1918.

Click here to find out more about Jennifer Els.