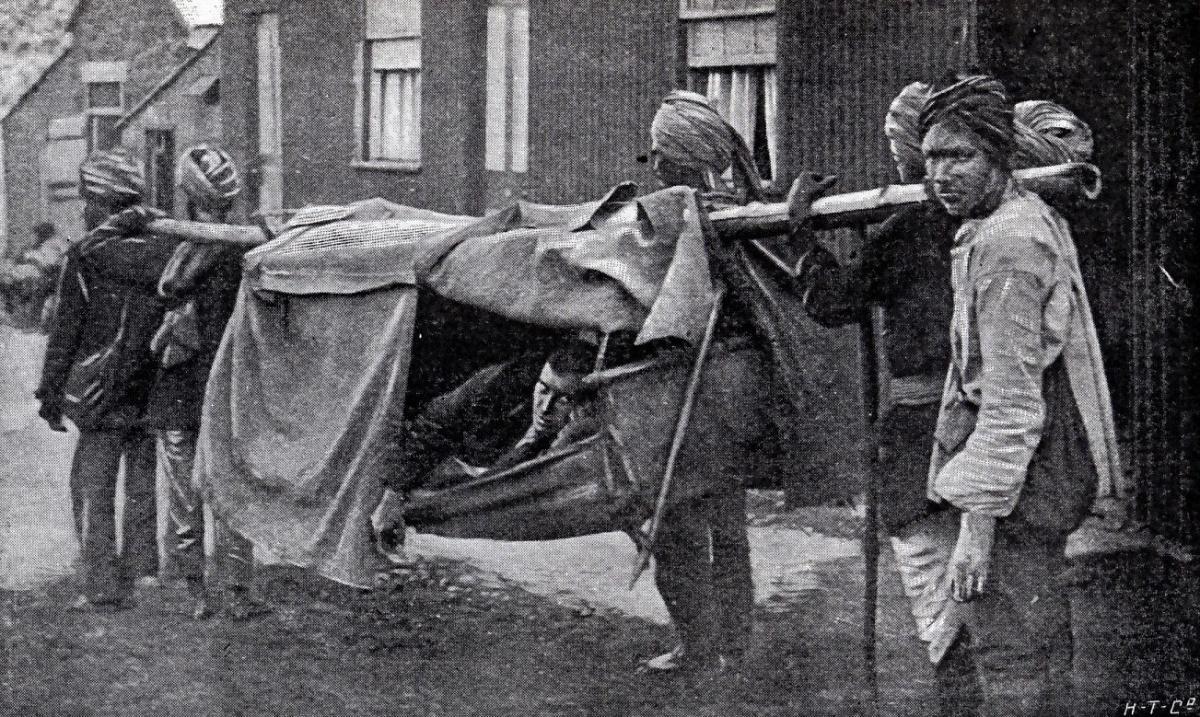 There are a number of myths around the formation, members, service and disbandment of the Natal Volunteer Indian Ambulance Service during the Boer War. Prompted by an enquiry by a fellow collector, I was lucky enough to find a wealth of information in the Talana Museum archives.

"In 1893 an attorney-at-law, Mohandas K. Gandhi, arrived in Natal on a brief legal assignment. He decided to remain, on learning that disenfranchisement of Indians was intended. Together with influential others from the Indian community, he founded “The Natal Indian Congress” and became editor of “Indian Opinion”. He conceived of a new technique of political resistance based on the methods of “satyagraha” (“soul force”)  and derived from the teachings of the pacifist Jain sect of Hinduism, a technique of resisting an objectionable law, if need be by enduring suffering, but without resorting to violence or ceasing to respect those who governed the people or enforced the law.

During his sojourn in South Africa, two field units were raised and commanded by Mohandas K. Gandhi from amongst his fellow countrymen then resident in Natal; one in 1899 (Indian Ambulance Corps) and the other in 1906 (Indian Stretcher-bearers Corps). 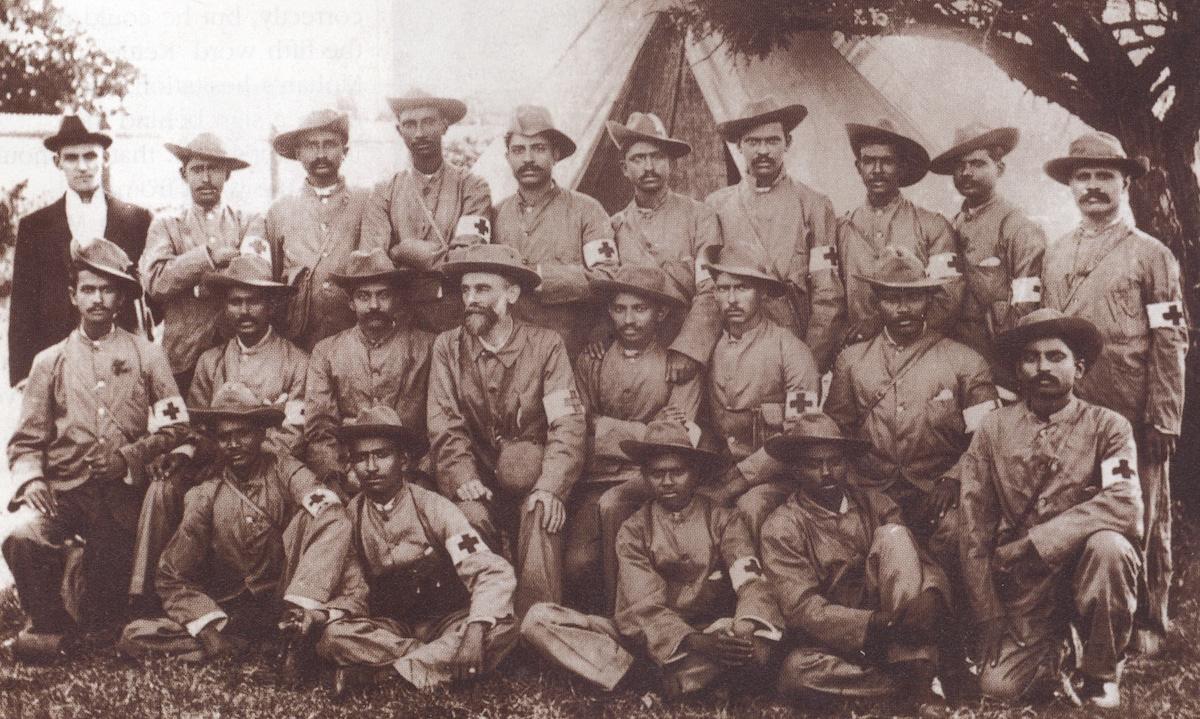 Being unable to become combatants, Gandhi proposed that Indian volunteers serve as stretcher bearers together with the 1000 strong Natal Volunteer Ambulance Corps (who were made up largely from men who had fled the Rand before the outbreak of the war) organized by Colonel T. Gallwey, Principal Medical Officer of Natal. This offer was initially declined. However, General Buller, later recognizing a need for assistance, intervened and had the decision reversed.

Early December 1899 saw Gandhi applying pressure by maintaining contact with the Colonial Office. The Reverend Doctor Booth was seconded to the group. On 11 December Gandhi telegraphed Prajee Bhinbhai Bellair to have him alert the volunteers to stand prepared, and he and Dr. Booth met with the Colonial Secretary the following day to finalize arrangements.

The Corps was sent forward by train on 14 December 1899, reaching the Field Hospital at Chieveley the following day The task of the Indian Bearer Corps was defined as having to take the wounded brought by the Natal Volunteer Ambulance Corps from the battlefield and carry them to the railhead. They had been given no combat training as there was no expectation of their serving under fire. However, they were immediately employed in assisting the wounded at the battle of Colenso. On 17 December 1899 the Corps moved to Estcourt and peculiarly was temporarily disbanded two days later.

Reformed on 07 January 1900, the Corps was again stationed at Esctcourt. On 24 January 1900, at the battle of Spion Kop, the Corps agreed to serve under fire and carried the wounded from the field to base hospital at Frere.

The Corps was disbanded at the end of February 1900 after Ladysmith had been relieved.

The initial formation, the Indian Ambulance Corps, served with distinction at Colenso, Spion Kop and Vaalkranz and had a strength of 34 Leaders and 1100 men. Being civilians and unpaid volunteers, their members were not considered to receive medals (nor, incidentally, the Queen’s Chocolate). The Rev. Dr. Lancelot Parker Booth, the Medical Officer of the Corps, lobbied the Secretary of State for War, Sir John Broderick, for decorations on behalf of the Leaders. Field Marshall Lord Garnet Wolsely agreed to the proposition as he felt that, were the matter brought to Queen Victoria’s attention, she would have insisted that medals should be awarded”.

There is some confusion concerning Booth’s submissions on which Leaders he felt deserved a medal. On 08 October 1900 he submitted 18 names. Yet his handwritten list (date unknown) lists 31. A combined list of these men comes to 40. 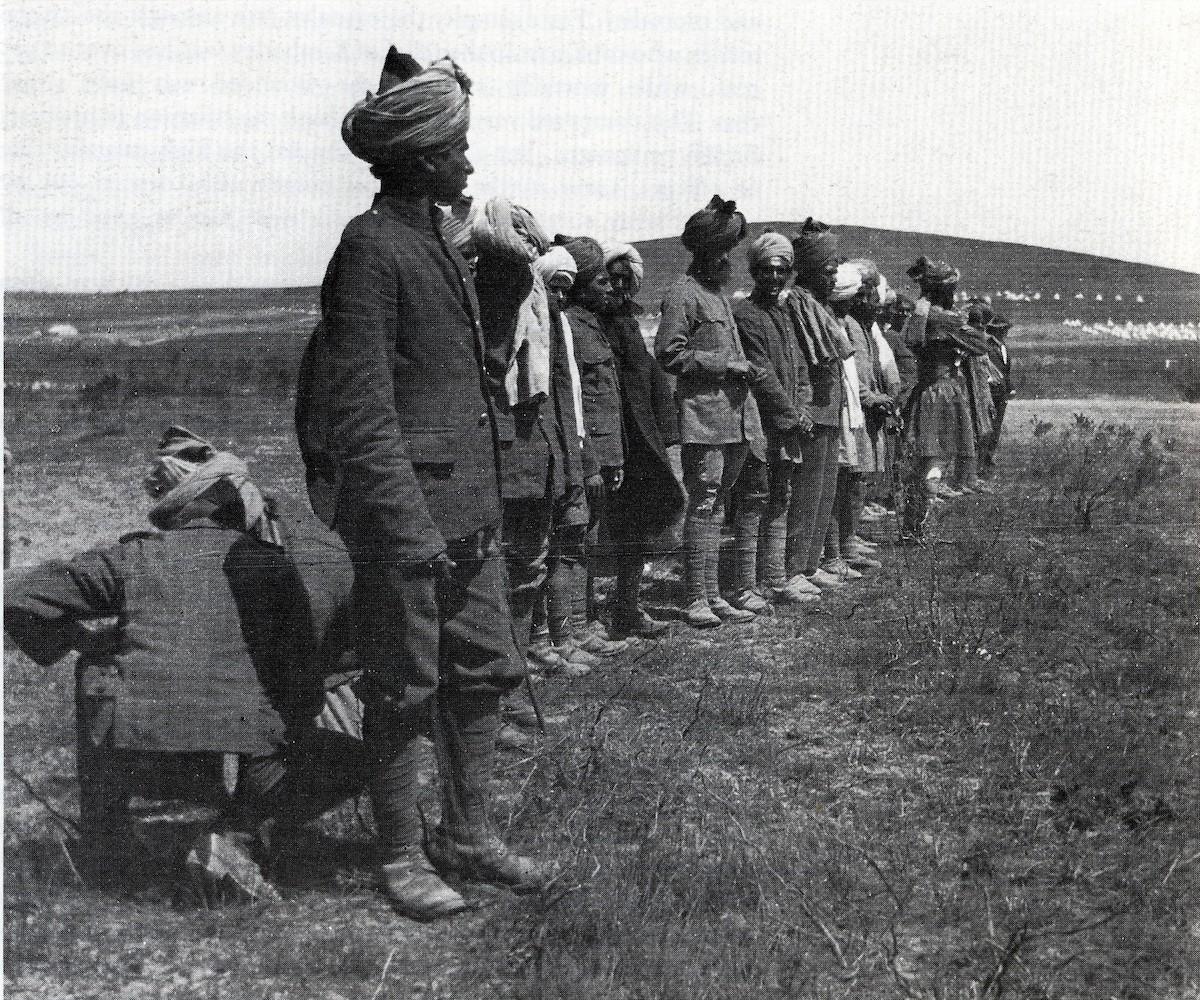 Firstly, the Natal Volunteer Indian Ambulance Services should not be confused with any other Imperial Indian Medical Services nor the Natal Volunteer Ambulance Corps. At best, there were 40 Leaders in the NVIAS and they served for only two months – 12 December 1899 to the termination of the Relief of Ladysmith campaign at the end of February 1900.

Although Gandhi would have indeed played a large part in raising the force from among his own countrymen, technically he would not have been the Commanding Officer. That would have been Reverend Doctor Booth, and it is in this capacity that he lobbied for medals for his Leaders.

“The task of the Indian Bearer Corps was defined as having to take the wounded brought by the Natal Volunteer Ambulance Corps from the battlefield and carry them to the railhead. They had been given no combat training as there was no expectation of their serving under fire. However, on 24 January 1900, at the battle of Spion Kop, the Corps agreed to serve under fire and carried the wounded from the field to base hospital at Frere”.

This statement has been interpreted to mean that members of the Corps were actually on top of Spioenkop, helping to carry the casualties off the actual battlefield. However, according to Hayward’s “The South African War Casualty Roll – The Natal Field Force”, no member of the Natal Volunteer Indian Ambulance Services was even scratched.  This is hard to believe if they were in the thick of the action.

As one might expect, though, the Natal Volunteer Ambulance Corps suffered two dead and eleven wounded during the Spioenkop operations. But even these casualties were not necessarily sustained on the actual battlefield. According to Hayward, these casualties were sustained at “Spearman’s Camp and Venter’s Spruit”. This tends to suggest that “under fire'' in this case would possibly have been referring to the rear of the British positions or the crossing points across the Tugela River, which were subject to long range Boer fire.

Also the sentence "carried the wounded from the field” would mean from the hospital at Spearman’s Camp to Frère and not from the actual battle site.

This is not the case. Mike Rowan of Kloof also has a silver medal with clasps Tugela Heights and Relief of Ladysmith to David Vinden, so although these might have been the exception, more than one silver medal with bars was awarded.

The belief that the men were “unpaid volunteers” has circulated forever. However, the Natal Archives holds a payroll of the Corps, issued by the Department of Public Works - a copy of this documents is held by Talana Museum.

Many of the photographs of Indian stretcher bearers do not pertain to the Indian Ambulance Corps, but are of Indians from India, who were part of the Royal Army Medical Corps. Due to the date on inception of the Corps no local Indian stretcher bearers were present at the battles of Talana and Elandslaagte. There is information in the Talana Museum archives of local Indians, who came out to watch the battle of Talana from the edge of the town, and then who voluntarily assisted to carrying wounded from a field site into halls and churches in the town, that were being used to treat the wounded.

Removing men from the field after the Battle of Elandslaagte - W Dewar.jpg 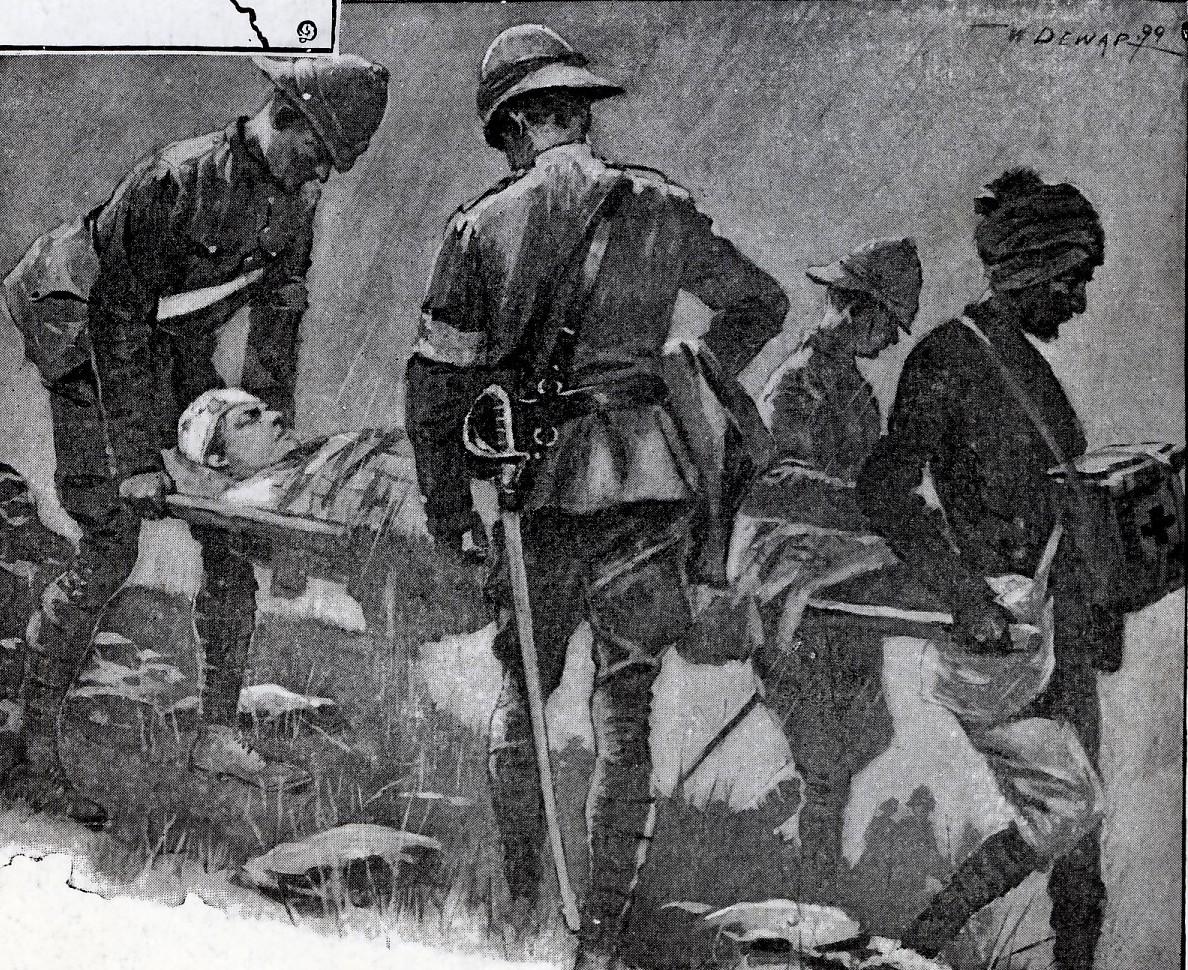 Incidentally, although we refer to the battle of Talana, it took 3 days before that became the accepted name – it was originally called the battle of Glencoe, then Dundee and finally Talana, being the name of the hill up which the British troops fought.