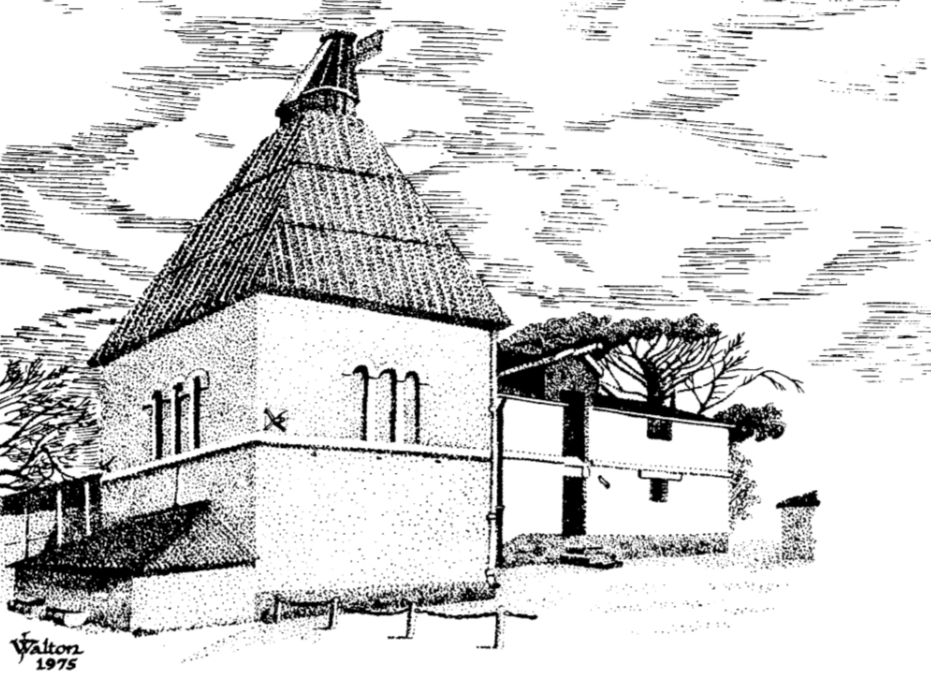 In the article below, James Walton reveals some early Cape brewing history and emphasises the significance of the Mariendahl Brewery in Newlands. The article was published in the 1976 edition of Restorica, the journal of the Simon van der Stel Foundation (today the Heritage Association of South Africa). In the mid 1990s, the complex was transformed into a visitors centre (click here for an overview of the project). Today, tourists continue to pour into Newlands to take in the remarkable history (click here for some more recent photos). Thank you to the University of Pretoria (copyright holders) for giving us permission to publish.

Situated on the south bank of the Liesbeek River, within a stone's throw of the famous Newlands rugby and cricket fields, is one of South Africa's finest industrial monuments, Mariendahl Brewery. Fronted by sweeping lawns and colourful flower-beds, the well-preserved white-walled buildings stand out against the back-drop of Table Mountain to present what must be one of the most attractive groups of industrial buildings anywhere.

The tall brewery, dating from 1859, is the oldest remaining relic of an industry which had its South African origin just over two hundred years earlier, for, on 16 February 1657, Van Riebeeck recorded that "today in accordance with instructions from our Lords and Masters, a trial was made with brewing beer", and he later reported that the beer "to all appearances succeeded well''. The Cape beer, however, would not keep for more than four or five weeks, and samples sent to India and Holland arrived sour. Nevertheless, the experiment continued and on 4 October 1658, the ensign, Jan van Harwarden, "was busy brewing beer" and the following day "the beer was rising nicely in the cooler, and in the morning, when it had been placed in a half-aum, it began to ferment well". Orders were accordingly given for more to be brewed so that some casks could be sent to Batavia and Holland to test how long it would remain in good condition at sea, and these samples were considered by the Council to be "fairly drinkable". In the same year a second brewery was established by a man named Visagie on the banks of the Liesbeek "two hours distant from the fort". 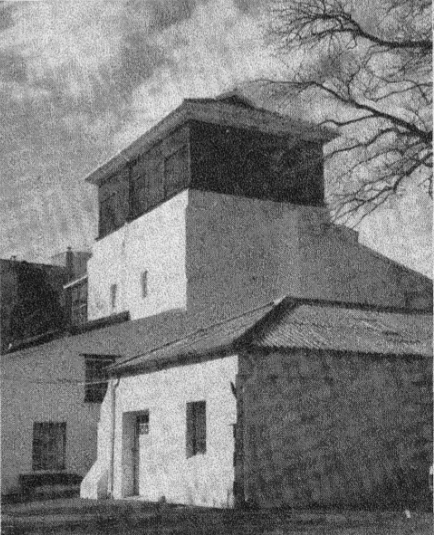 Jacob Letterstedt died on 18 March 1862 and his business was carried on by his daughter Lydia, Vicomtesse de Montmort, and her husband, under the name of "Letterstedt and Company", until 1888, when Mariendahl Brewery and "all the buildings connected therewith, the railway siding and all adjacent buildings and ground, except Mariendahl House and garden, at present in the occupation of the lessors, in addition to certain water rights" were leased to Anders Ohlsson and Company.

Anders Ohlsson was born near Christiania, Norway, in 1841, but he received his education in Sweden and at the age of twenty-three he sailed for South Africa, where he started up business as an importer of Swedish goods before branching out as a trader in Damaraland in partnership with A W Erikkson. On 5 January 1881 Ohlsson purchased from David Iredale, a miller, "ground called 'Anneberg', Palmboom, Rondebosch", and he must have built a brewery at Anneberg immediately after obtaining possession, for in the 1882 Directory we find "A Ohlsson and Co, Millers, Brewers, Anneberg Brewery, Newlands". On 12 February 1896 Ohlsson acquired Mariendahl, so that he then owned all the Newlands breweries, which were floated as a limited company under the style of "Ohlsson's Cape Breweries, Ltd".

Most of the buildings shown on the 1863 plan have survived, although many of them have been considerably altered. The angular stores building was largely demolished before 1888 but the outside wall of the wing running parallel to the road still forms the boundary wall of the car park. The brewery itself remains very much as it was when first built and it still houses a giant wooden vat, made by "Henry Pontifex and Sons, Albion Works, King Cross, London", but a second similar vat has unfortunately collapsed. The "taking-in" door, with its landing-platform and pulley-beam above, forms a picturesque feature of the building. Inside is a fine old winch, used in conjunction with the pulley to hoist sacks of malt and hops. The oast-house is the most attractive building of the complex but it was built after Letterstedt's time. In Britain and western Europe such oast-houses were used for drying hops but whether that at Mariendahl served a similar purpose has not been established. It could have been used as a malting, although hops were cultivated in the neighbourhood. Even in the time of Van Riebeeck attempts were made to grow hops at the Cape, and over two thousand five hundred hop plants were imported, but the trial was not a success. Similar experiments also failed until 1829, when it was recorded that hops had been successfully cultivated in the vicinity of George. 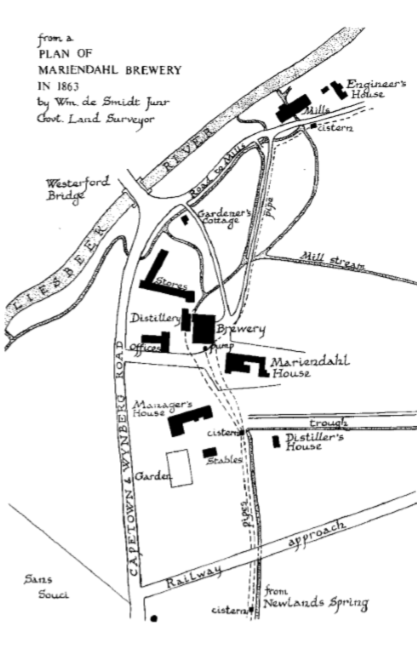 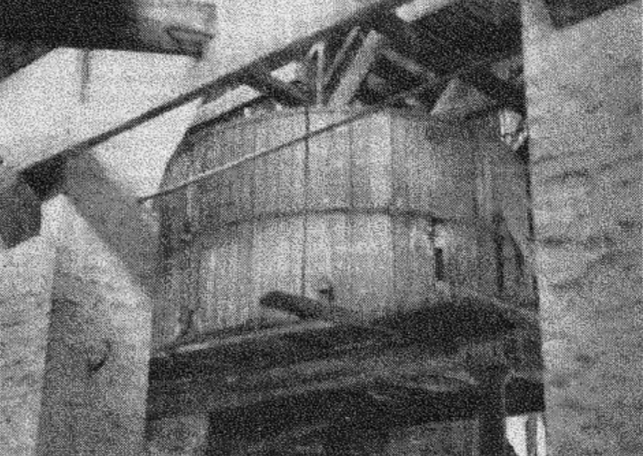 The Brewery still houses a giant wooden vat, made by "Henry Pontifex and Sons (James Walton) 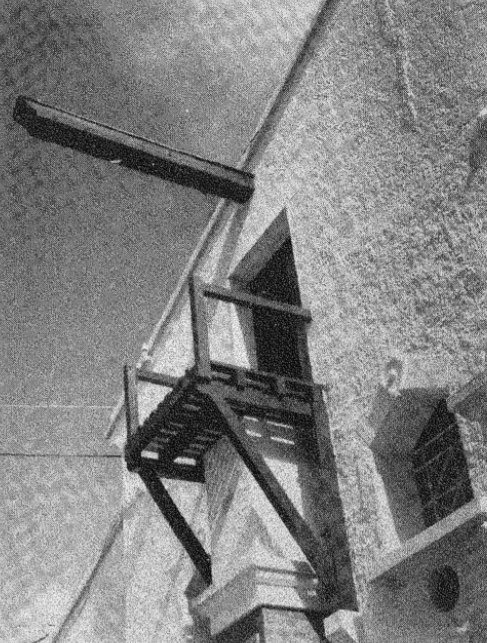 The "taking-in" door, with its landing-platform and pulley-beam above (James Walton) 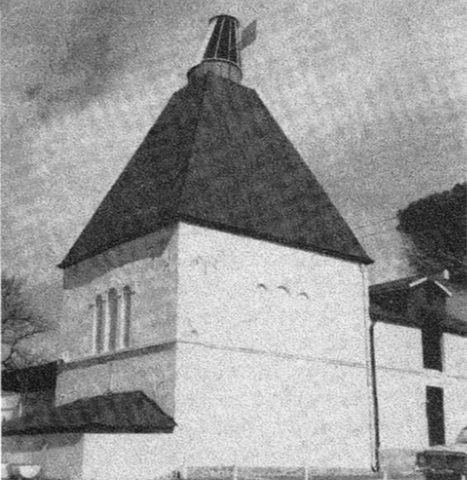 Nevertheless, hops were grown at Newlands before 1888. In that year the Comte de Vasselot de Regne and the Vicomte de Montmort, son-in-law of Jacob Letterstedt, privately published a booklet on Hop Cultivation, which was printed by the Wynberg Times Steam Printing Office. In this booklet the authors urged the need to cultivate hops in South Africa as an important source of revenue. They gave full details of how hops should be cultivated, dried and pressed, and they made frequent references to hops already being grown at Newlands. In view of the Vicomte de Montmort's obvious interest in hop cultivation and his association with Mariendahl Brewery, it is possible that the oasthouse may have been erected about that time for the purpose of drying hops.

Ohlsson's Cape Breweries are to be congratulated on the excellent way in which they have preserved the old buildings of Mariendahl Brewery, which constitute such a fine industrial monument, and it is hoped that pressures of development will not result in the destruction of the complex, particularly the brewery, oasthouse and adjoining buildings. Overseas, the study of industrial archaeology and the preservation of industrial monuments are now receiving considerable recognition, as is evinced by the mass of literature on the subject and by the many fine open-air industrial museums which have been established. A start has been made in South Africa, and the preservation of Mariendahl Brewery would be an ·important contribution.