The Village and Buildings of Cullinan

John Lincoln returns with the seventh installment of his series on the history of Cullinan (click here to view the series index). It focuses on some of the wonderful historic buildings of the town.

Letter written by A Gass to the mine in 1978 about the Presbyterian Church during World War I:

Owing to the war and the closure of the mine the churches were without ministers. At that time there were four churches, the Anglican or English Church was near the post office. The Presbyterian Church had as its minister Rev. William Menzies, who was a chaplain to the SA Scottish and was away on active service. We as Presbyterians had an old missionary by the name of Christensen for a time but the boys were taken by a resident of the mine who at one time was a member of the Salvation Army, he was Mr Mahon. According to him our future outlook was none too good for all we could hope for was a perpetual life in some HOT PLACE, it was never referred to as HELL!

It is little wonder that with this as a prospect to look forward to, we were forced into taking the ‘tickey’ we were given for the collection and changing it to three pennies; two went into the collection plate and the remaining one into the chocolate machine at the railway station.

When Mr Mahon found this out we were due not only for FIRE but BRIMSTONE as well.

Presbyterian Church Cullinan opened in a tent via Mark Smith.png 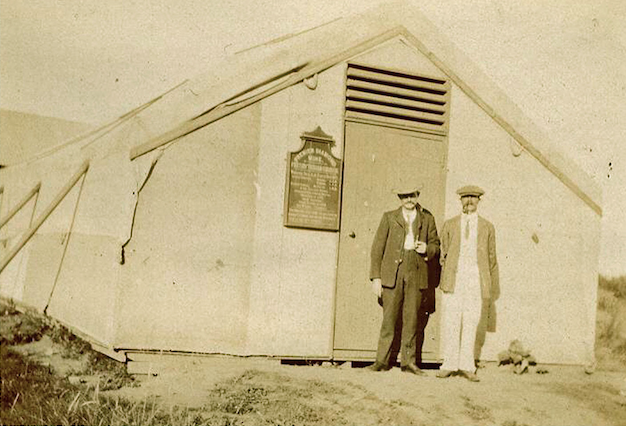 The first church in the village, the Presbyterian Church, opened in a tent (via Mark Smith) 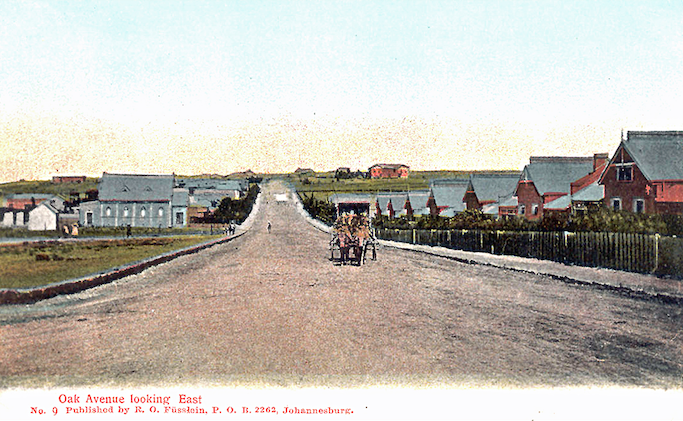 View down Oak Avenue. Presbyterian Church on the left, hotel on the horizon. (Cullinan Mine Archive) 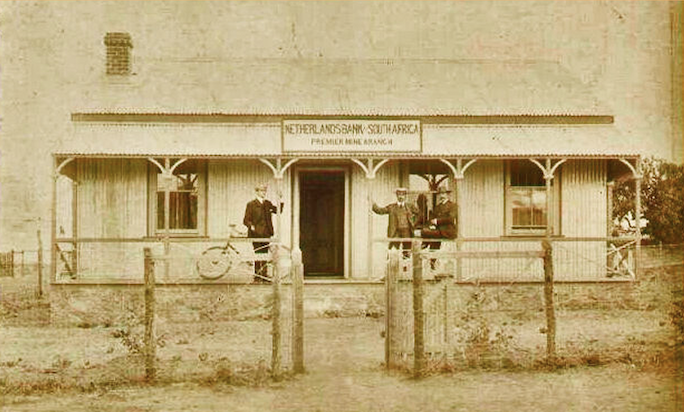 The first bank in the village. It now houses tour operators. (via Mark Smith)

Village from the mine. Probably taken about 1908, this picture would have been taken from the mine area looking towards the village. It is thought that the buildings in the foreground were single quarters. (Cullinan Mine Archives) 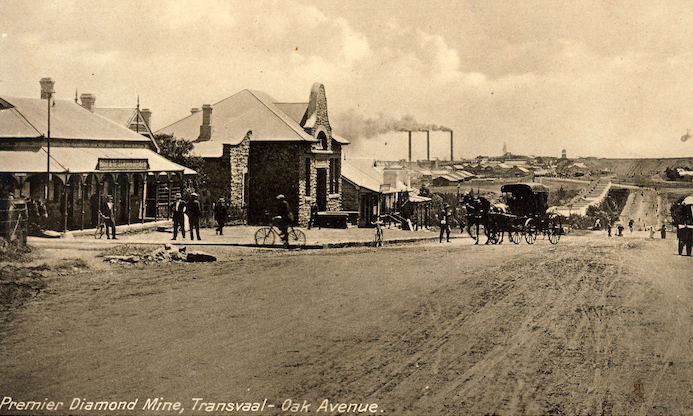 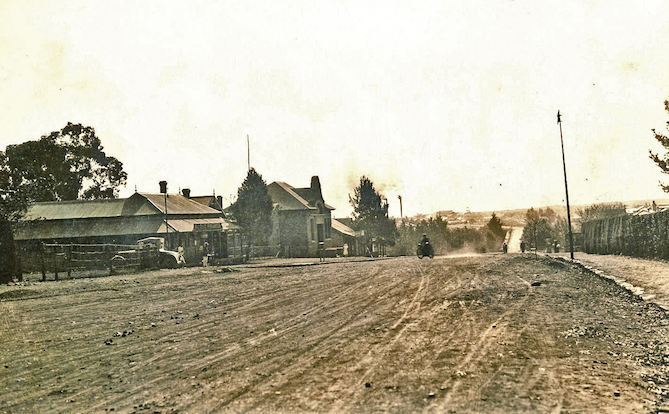 Two views of Oak Avenue with the Post Office and Nedbank on the left and the mine in the background (top Cullinan Mine Archives, bottom Metlerkamp Family)

The construction of the branch line from Rayton station continued throughout 1905 and the first consignment of machinery, comprising No. 3 gear, was delivered to the site in December, although the railway was not opened for general traffic until March 1906. The imposition of a 60% profit tax, a sore point with the board of directors and all shareholders, brought about the ire of one of the directors, Mr A Wagner, when he rose to move the adoption of Reports and Accounts at a general meeting. When considering the railway project he made his feelings known in no uncertain manner and remarked as follows:

We have had to build a railway which cost ₤36 705. 6s. 4d. and so that the railway should not run loose on the veld, we had to build a station at Rayton, which cost us ₤11 929. 10s. 0d. But that is not all. Before we could get that railway we had to enter into an agreement, by which we undertook that the C.S.A.R. should have the right to run the railway and charge us the same general tariffs as on the whole system. They should return to us, in the shape of profits, only such a sum as will not exceed 3 per cent on our money per annum, but in case the working expenses are not covered by the earnings, then we, the Company, have got to make good the loss. In six months we have suffered a loss of ₤300. I do not mention this loss, or even ₤1 000 per annum loss on the railway, but only to show you that the assistance we get is not that cheerful and ready assistance to which we are entitled.

Eileen Stanley wrote this letter to the Chronicle in 1976:

I can remember as children going by train, on Sunday morning to the zoo at Pretoria for the day, coming back in the evening the train would stop at Rayton, where we stopped in the train for the night. Early Monday morning an engine would take us back to the mine, just in time for everyone to go to school or work, then the train would go again and leave for Pretoria at 6am.

Railway station in 1908 - Cullinan Mine Archive.png 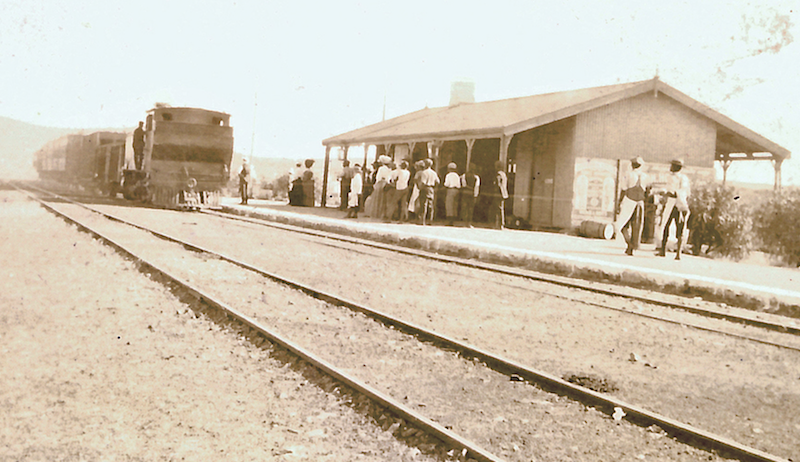 Railway Station in 1908 (Cullinan Mine Archives) 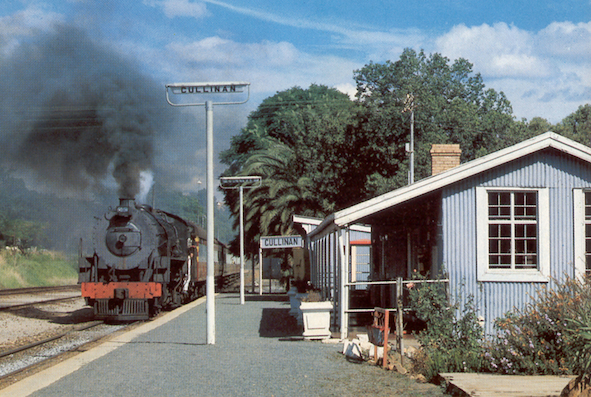 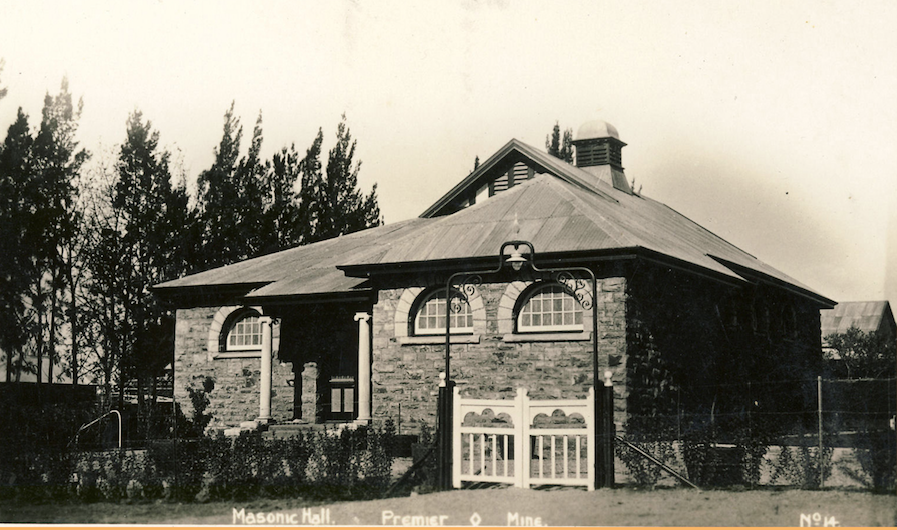 The exact date of the opening of the hotel is unknown. Even the original plans for the hotel and boarding house have no date on them. It is believed that they were built in 1905 with probably the boarding house being finished first. The first reference to the hotel was made in 1907 when the Premier Mine Co-operative Society was formed. At that time a Mr Heymaan was running the hotel and shops. It was stated in the minutes that the buildings would be bought from Mr Heymaan.

It is unlikely that the hotel was built by Mr Heymaan as the original plans of the hotel have Premier Transvaal D M Co. Ltd. as a caption, so the buildings being referred to were probably the shops. The Co-operative Society continued to run the hotel until it closed in 1988.

During the war years the hotel was taken over by the army but access was limited to commissioned ranks only. After much correspondence, the mine eventually managed to get the hotel opened to all ranks, but only in 1941.

The army also built the annex to the hotel across the road. Next door to the hotel, where the car park is now, was a garage called Nichols'. He also ran a taxi service from there.

In recent years the mine has sold the hotel, the building has been refurbished and it has once again been opened for business.

Old photo of the Premier Hotel - Cullinan Mine Archives.png 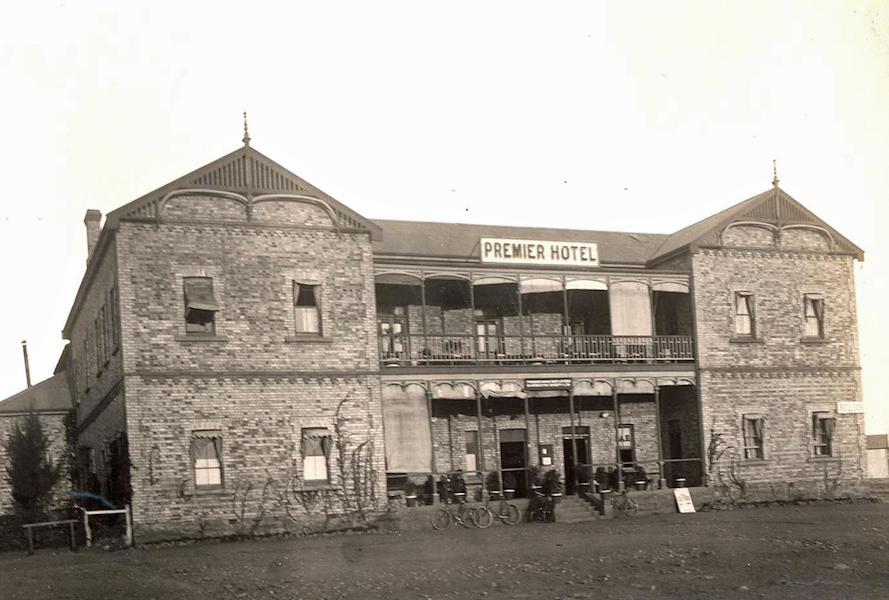 Car Rally in front of the Premier Hotel - Cullinan Mine Archives.png 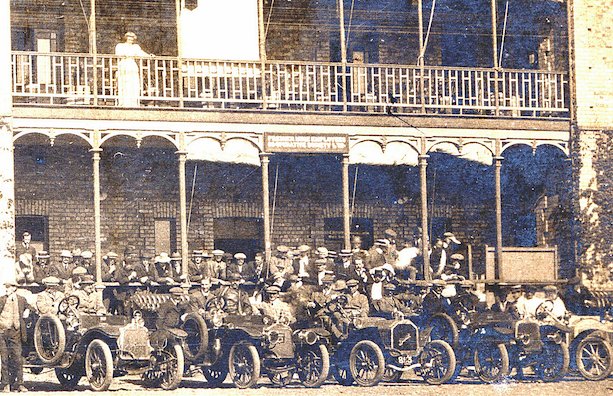 Car rally. Now it is frequented by bikers. (Cullinan Mine Archives)

Postcard of Premier Hotel circa 1910 - Cullinan Mine Archives.png 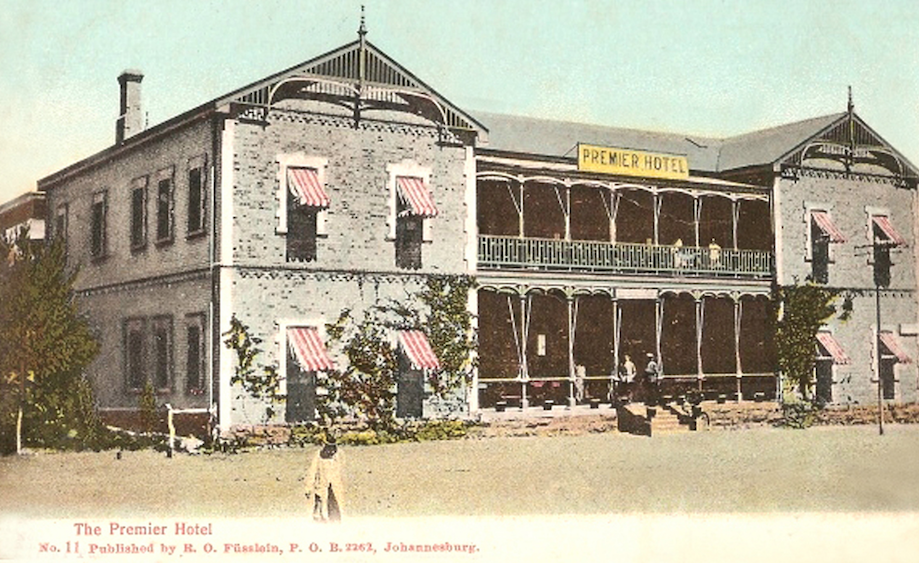 Hotel circa 1910 (Cullinan Mine Archives)

The first Recreation Club was built in 1905 as a centre for the mineworkers’ social activities. It was also used as a school, which was not very practical as school often had to be cancelled on Monday mornings because the rooms had not been cleaned after the previous weekend’s activities.

By 1909 the school moved to its own premises and a new Recreation Club was built in 1912.

Soon many sub-clubs had been formed. These included the Garrick Club, the Premier Mine Progressive Debating Society and the Philharmonic Orchestra. Silent movies were shown in the main hall where a Miss McLeod played on the piano. Extracts from the minutes show that there were lots of complaints about the frequent repetitions of her music.

In the corner of the hall is a brass plaque dedicated to the 41 soldiers from the district who died during the Great War.

Research has revealed that many of these men were retrenched from Premier Mine when it closed in 1916; one wonders, if the mine had stayed open, would they have enlisted and paid the ultimate sacrifice?

Over the years the building has also been used as a museum, reading room, snooker hall and as a venue for the many concerts and balls held in the main hall. Two dance cards that the ladies carried at these functions have survived. 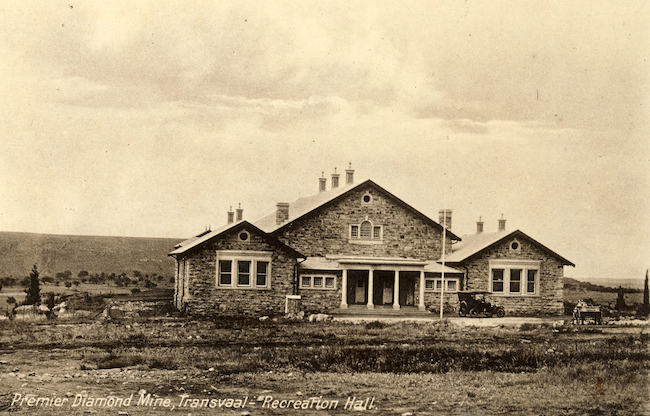 The Recreation Club shortly after opening (Cullinan Mine Archives)

Recreation Club circa 1920 - Cullinan Mine Archives.png 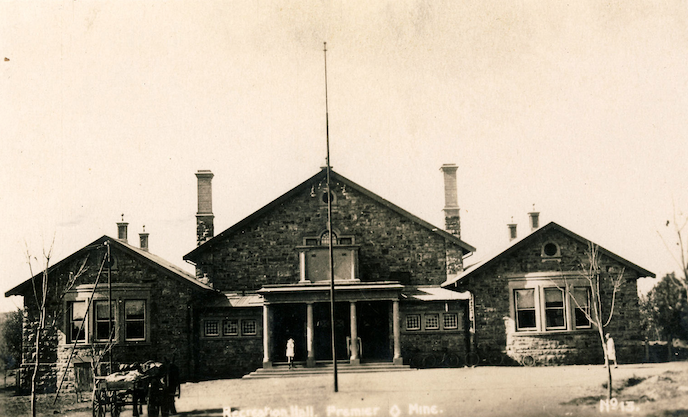 Recreation Club circa 1920 (Cullinan Mine Archives)

Below are a few more historic photos from the archives: 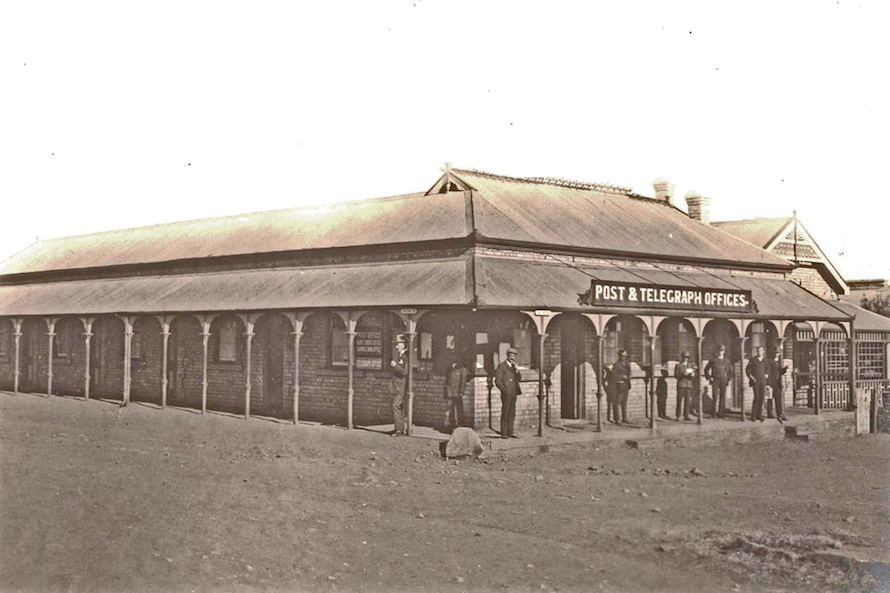 Original post office in July 1909. The post office was later replaced by the present one at the same spot. Care was taken to follow the design of the original. It is not known why an armed guard should be on guard at the entrance. (Cullinan Mine Archives) 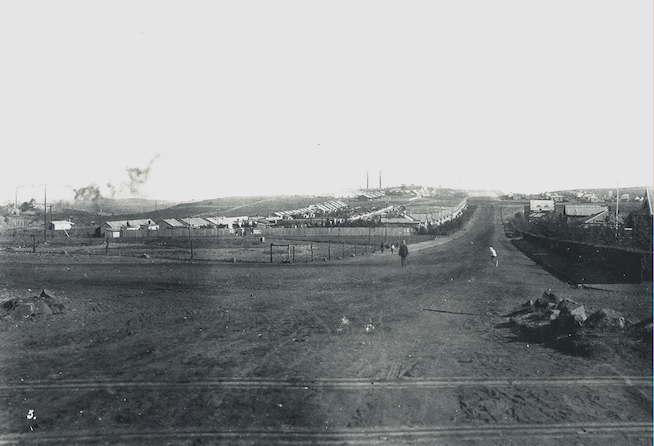 Oak Avenue East Cullinan - Cooperative Stores on the left Nedbank on the right - Cullinan Mine Archives.png 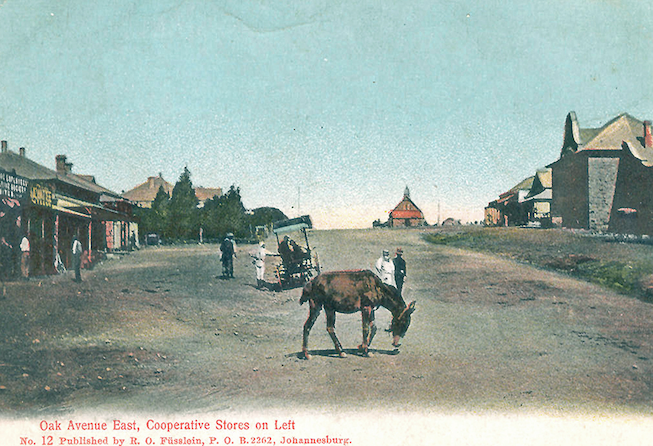 Co-operative stores on the left with Nedbank on the right. In the background is the Anglican Church. (Cullinan Mine Archives)

Village with new school in the background - Cullinan Mine Archive.png 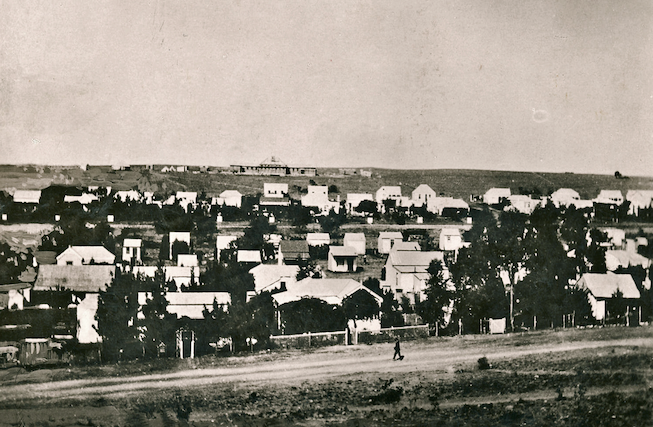 Village with new school in the background (Cullinan Mine Archives) 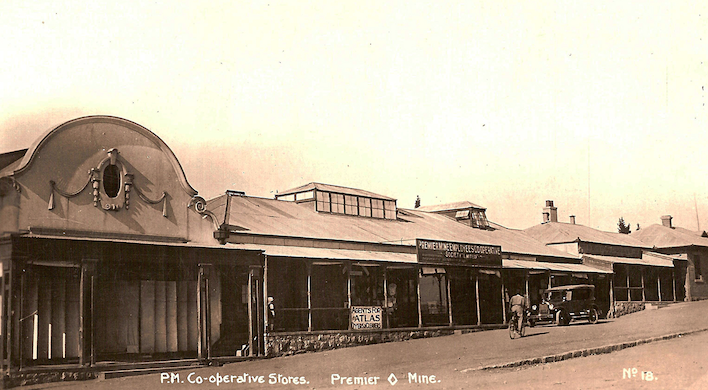 Premier Mine Co-operative stores circa 1930 (via Mark Smith)

Premier Mine Hospital in 1908 - Cullinan Mine Archive.png 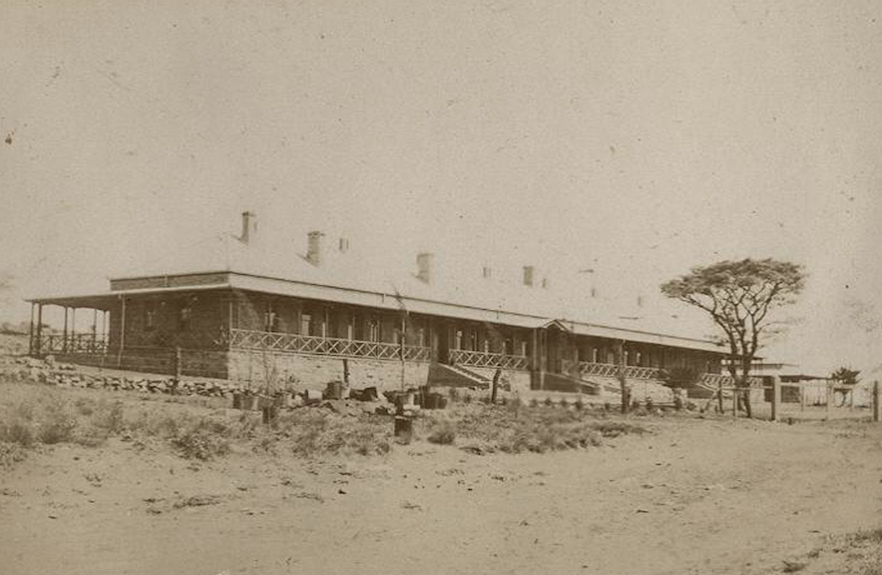 Hospital in 1908. The foundation stone for this hospital was laid by Mrs Cullinan in 1907. (Cullinan Mine Archives)

Cullinan Village seen from the mine circa 1908 - Cullinan Mine Archives.png 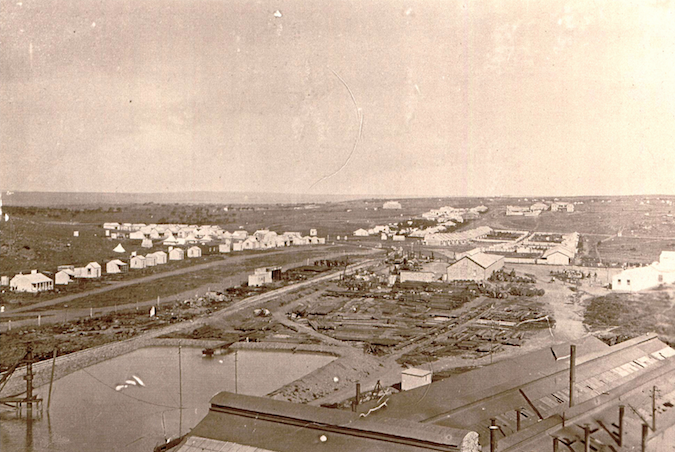 Village seen from the mine. Probably taken about 1908, this picture would have been taken from No 3 gear looking towards the village. The centre area was, and is now, the stores area, and the building that can be seen is still part of the present stores. The houses and tents on the left of the photo are where the White House and General Offices are now situated. Oak Avenue can be clearly seen and on the horizon is the first recreation club. To the right of that is the hotel.