The mystery of the Penn Symons flag

The Penn Symons flag arrived in the post addressed to the Museum Dundee back in the early 1980s. It has been on permanent display in the museum since 1983. It has an interesting story and one that is personally connected to my forebears. 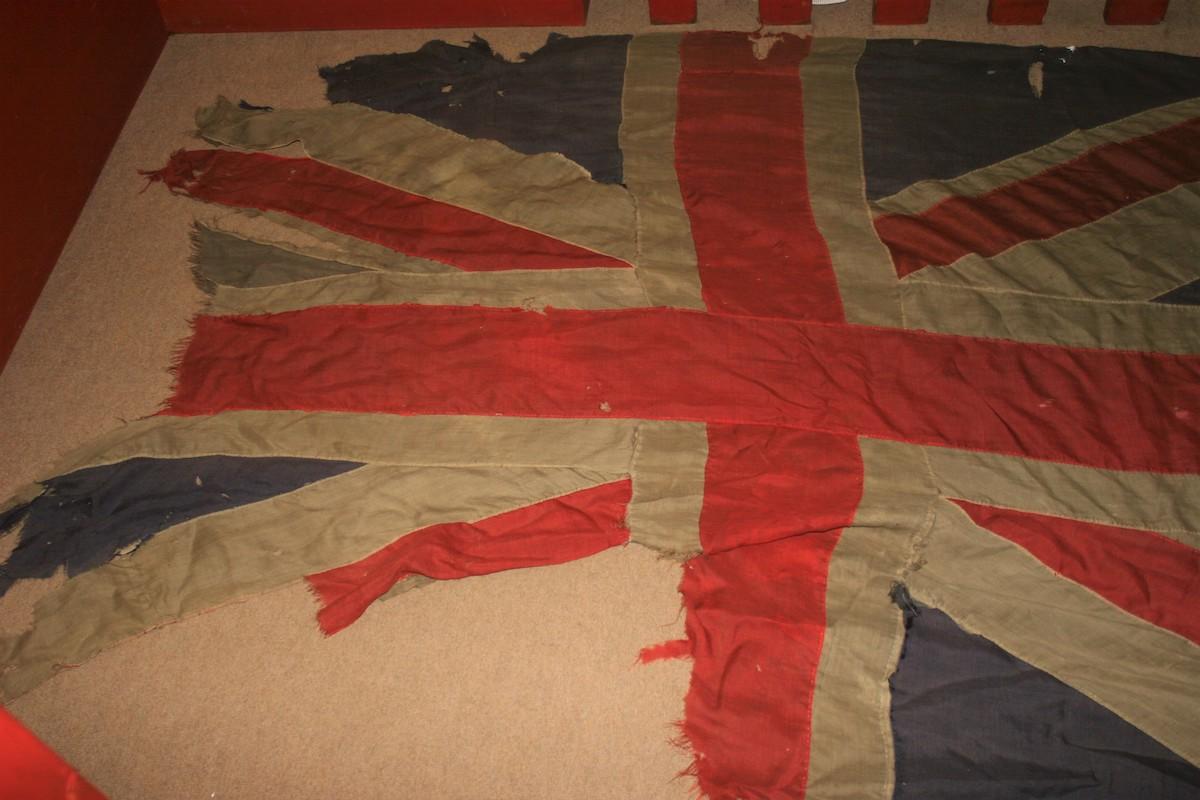 The idea for a permanent museum in Dundee that would commemorate the Anglo Boer War and particularly the Battle of Talana (the first battle of the Anglo Boer War of 1899-1902), the history of the coal industry (the Dundee Coal Company was launched on the London Stock Exchange in 1889), the history of glass making in South Africa (glass has been  made in our valley since 1889) and of course the local settler history, was mooted in 1977 with an exhibition in the MOTH hall to raise awareness. The decision was later taken to establish a museum to coincide with the centenary of the founding of Dundee in 1982 and the original Smith farm – Dundee farm, on the slopes of Talana hill - was purchased as a joint venture between the Dundee Town Council and the Province of Natal.

Looking at Talana From Dundee via Talana Museum.jpg

Looking at Talana Hill from Dundee

On the property is the stone cairn marking the spot where Gen Symons was mortally wounded and there are 56 British soldiers' graves from the Battle of Talana, in the lower portion of the Smith family cemetery on the premises. These soldiers' graves were originally slightly higher up the slope of Talana hill but were moved in the mid 1960s and reinterred in the Smith family cemetery for ease of maintenance – a decision and project carried out throughout South Africa by the then War Graves Committee. 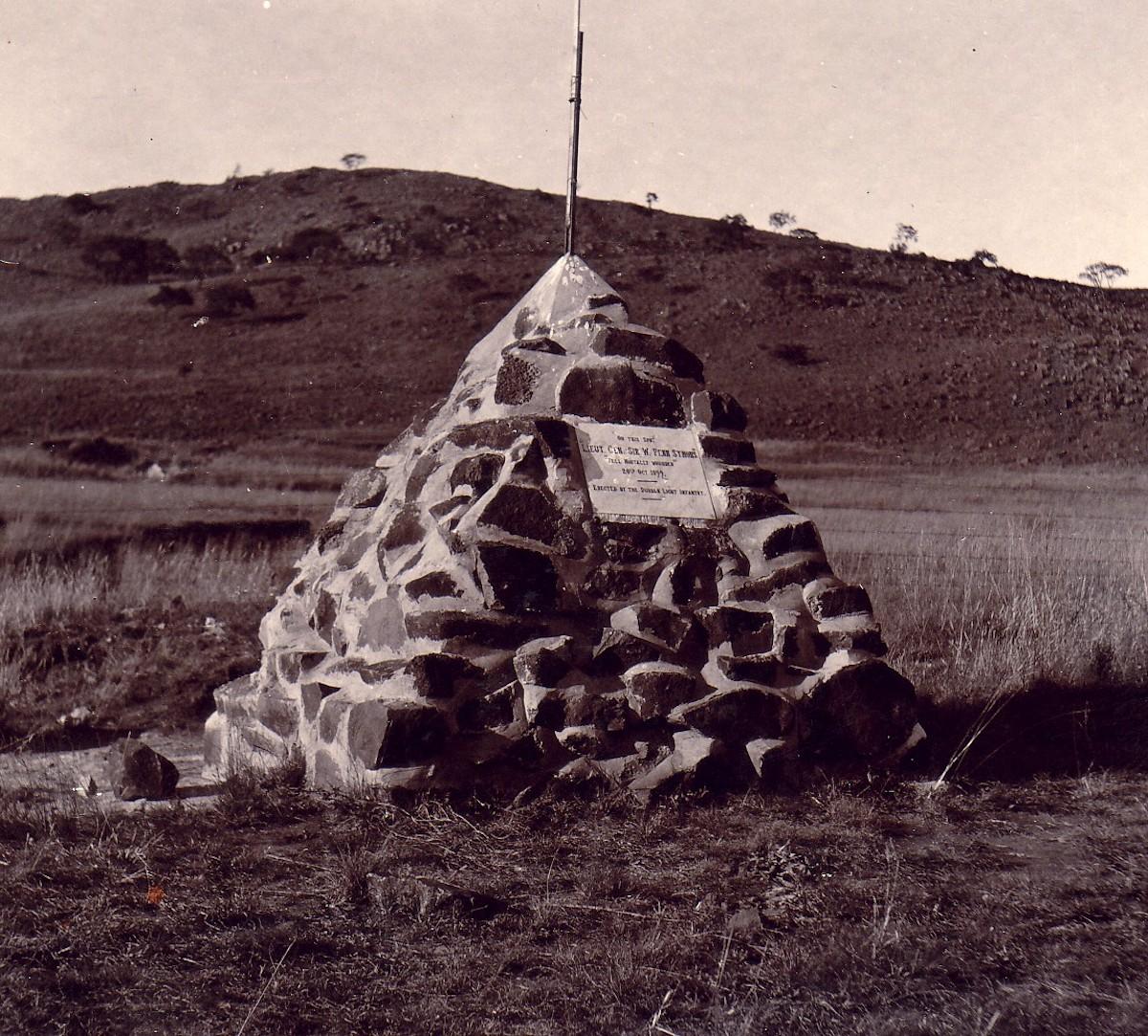 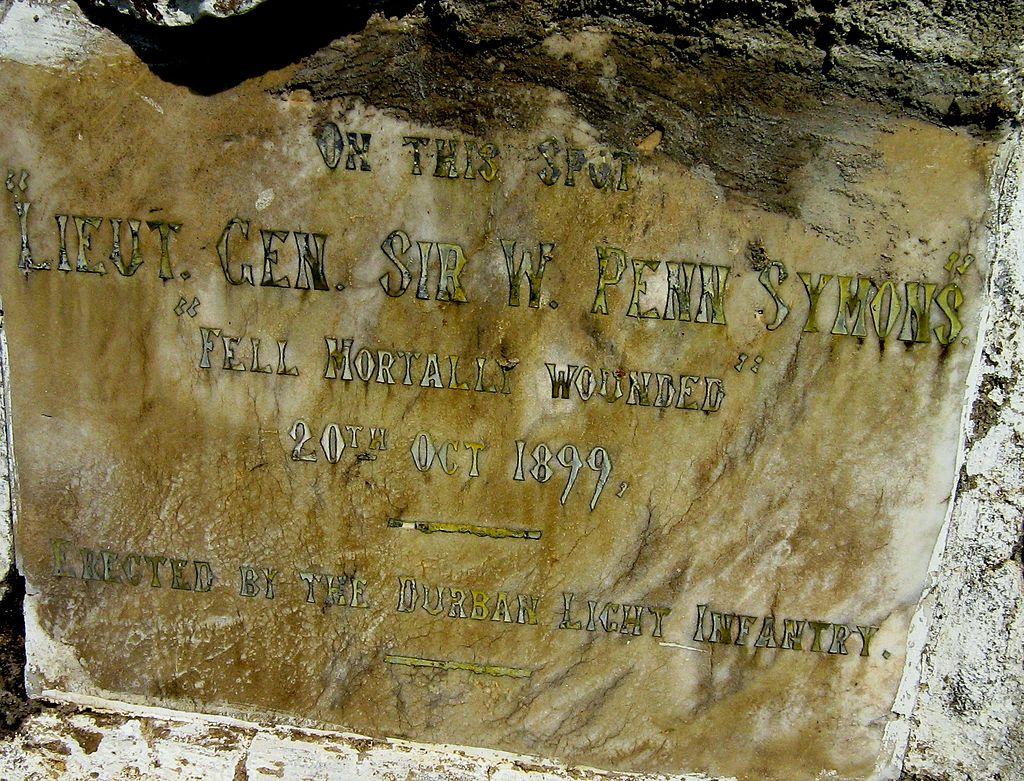 But back to the flag. The flag had come back with a covering note to the effect that as Gen Symons had died on the site, was buried in the grounds of St James Anglican church in Dundee, it was believed that this flag should come back to where it had its history.

Gen Symons was mortally wounded when, during the course of the battle, he climbed off his horse and onto one of the many stone walls, that Peter Smith had constructed on the farm, to encourage the troops onwards and upwards. Incidentally all those stone walls still remain and over the years, we have restored and repacked them where necessary. He was helped back onto his horse and back to the military camp. There is an oral tradition that has been passed down that he reputedly said “Carry on boys I’ll be out again tomorrow.” Well that was not to be, as he died of his wound. 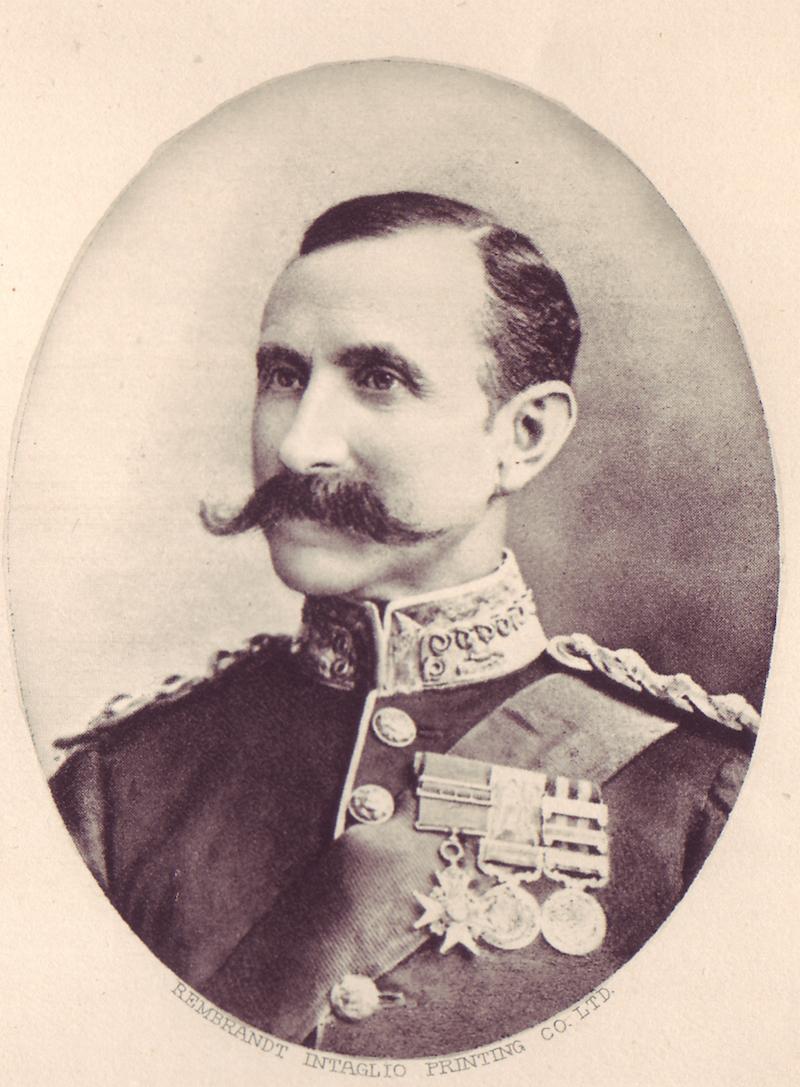 Denys Reitz in “Commando” writes “Towards evening (22 Oct) I rode up again to the English camp to have a look at it and, wandering about, I came on the field hospital, flying the Geneva Cross. One of the tents was a large marquee for wounded officers, and here I saw General Penn Symons, the Commander of the English troops. He was mortally wounded and nurses told me he could not last the night. Next morning as I was on my way up to the camp, I  met a bearer-party carrying his body, wrapped in a blanket…”

Major Donegan, one of the medical doctors, recorded in his diary that he “arranged for the funeral of General Symons. He had a rough …. made in camp. The body was sewen in Union Jack, carried to the Church of England burial ground by the NCO and men of the hospital staff, all officers who could attended and as the body was taken out of camp every man who could stood to attention. Mr Bailey, the church of England clergyman performed the Burial service in the orthodox manner fully in the church and at the grave side. The funeral was most imposing and all the Boers raised their hats as the funeral procession passed to the Burial ground where many of them attended the service being most respectful in their manner. At 4pm a sgt died in hospital and I was ordered to bury the 28 NCO and men and officers killed on Friday.” (Friday being the 20th October – the day of the battle of Talana.)

A rough wooden coffin was made in the camp and he was carried to the grounds of St Anglican church and lies buried there to this day. 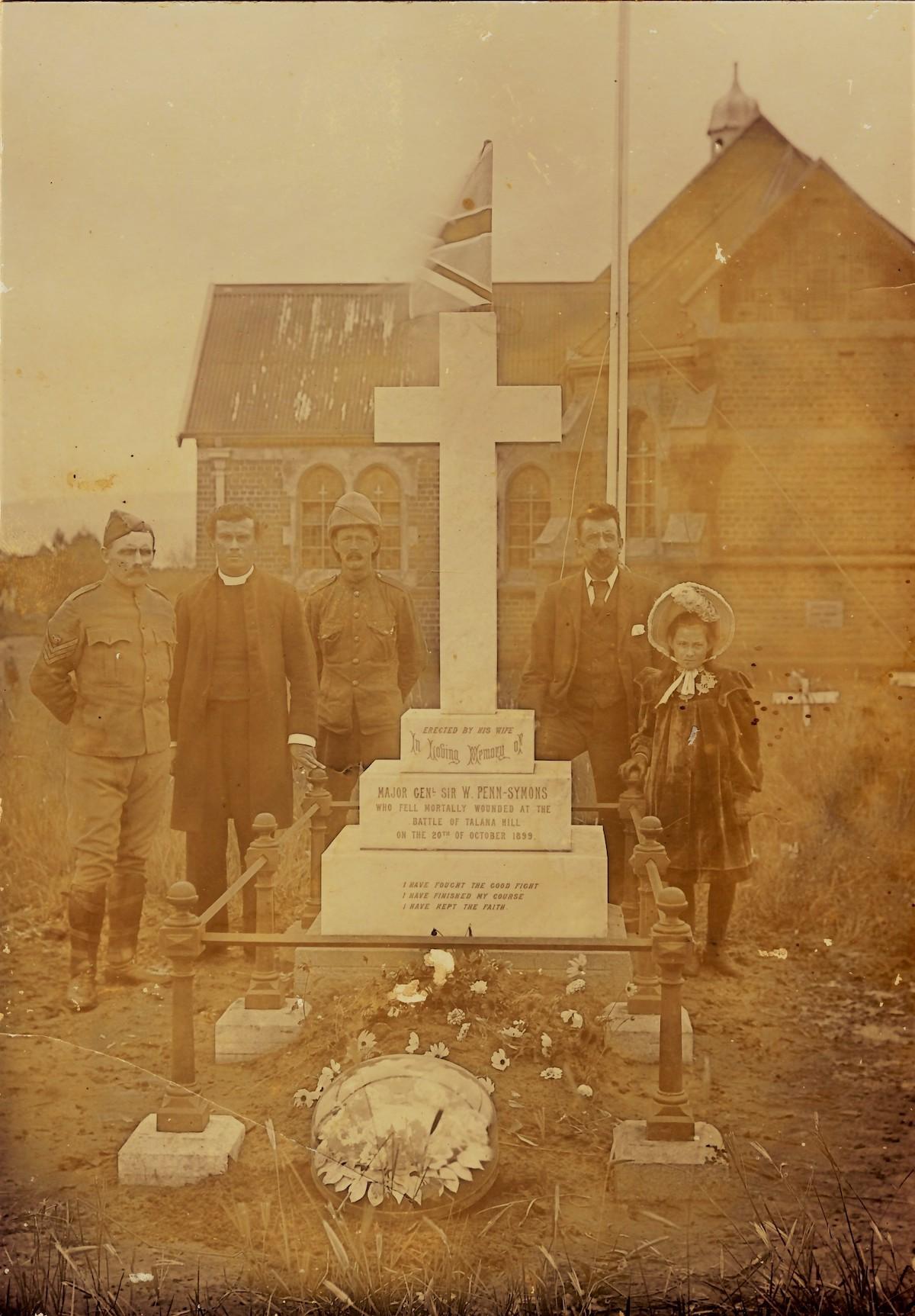 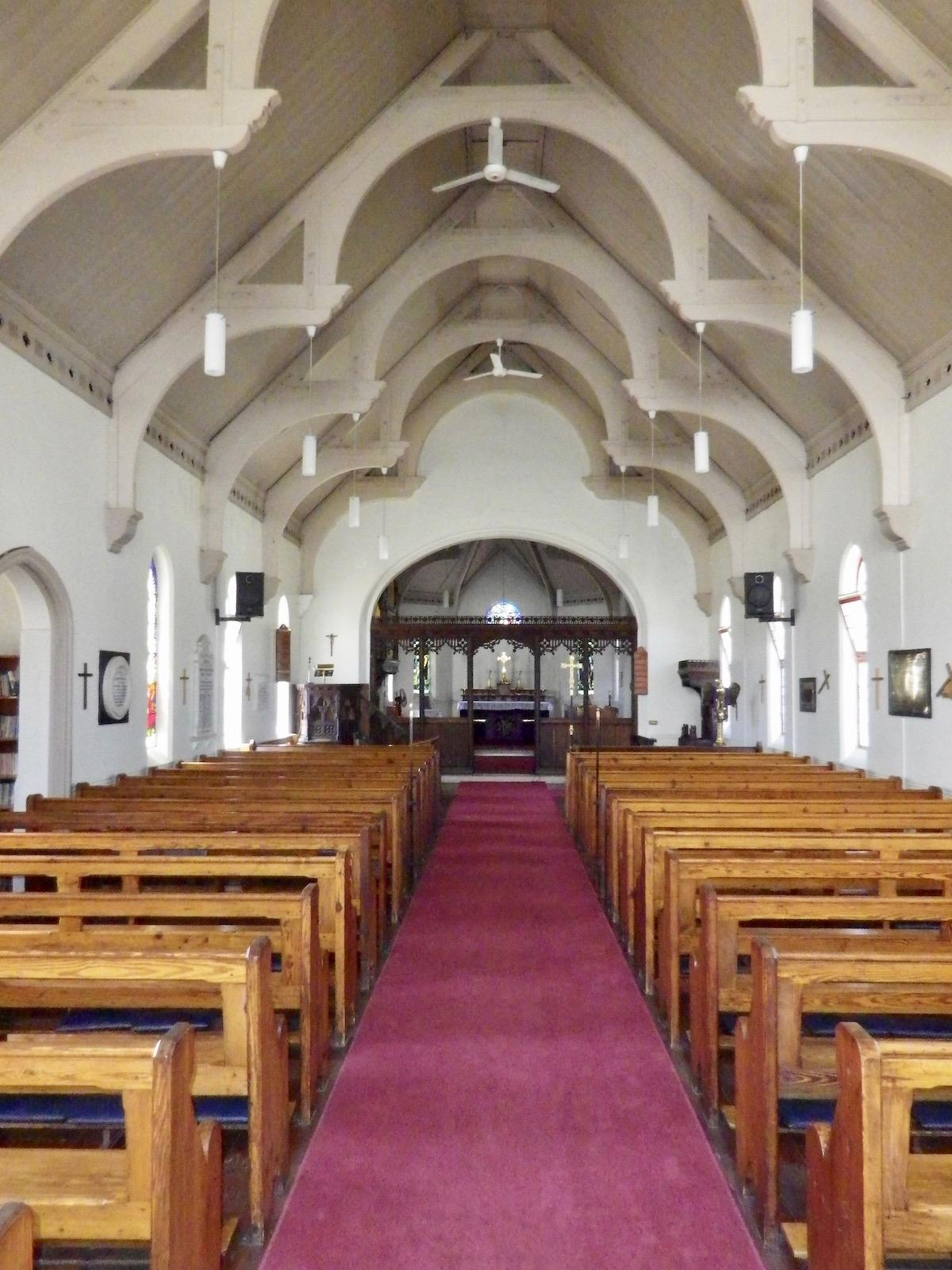 Rev Bailey had decided that the flag and all the church silver needed to be buried to protect it. At first he thought it would be possible to bury the items in the potato patch in the garden of the manse. However, on trying to dig up he ground it was so hard that he made little progress and the dug over piece was very noticeable. Then inspiration struck - to bury the items under the church floorboard as the church had a suspended wooden floor. That evening he took his photographic lamp – he was an avid amateur photographer – into the church, put it on the floor and then walked all around outside to see if the light was visible. It was not and so back in the church he used a blunt blade of a bayonet to cut a hole in the church floorboards. He closed up the hole with the intention of coming to the church in the early hours of the morning with the flag and all the church silver and burying them under the church floor. In the wee hours of the morning with the items under his minters robe he arrived at the church to find a Boer sentry on duty – oh dear! The sentry realised he was the “dominee” and told him he would stand guard so that no-one disturbed him at his early morning prayers! And so the items were safely buried for the next 7 months during the Boer occupation of Dundee.

On 15 May 1900 Dundee was relieved and the Union flag which had covered Gen Symons coffin and then buried under the floor boards of the Anglican church, by the Rev Bailey, was retrieved and tied to a tree branch to welcome the British troops back to Dundee.

On walking tours of the Dundee Heritage Trail, naturally we visit the church and Gen Symons grave, as well as the grave of Lieut Hannah, the first British soldier to be killed by a shell from a Long Tom, fired from the top of Mpati mountain into Dundee. I fold back the carpet in the church aisle and lift the 2 pieces of the floor board and lo and behold there is the hidey hole created to protect the flag and the church silver.

In the mid 1980s a request came into the museum from Anthea Martin, asking if we had any information on her grandfather, Samuel Jones. I was quite startled and intrigued by this, as I had considerable information, that I had personally been collecting on the Jones brothers (5 of them). Samuel was a member of the Dundee Town Guard and had been responsible for sending a photograph of the grave, a letter and the flag to the general’s widow, Lady Symons. However, his brother, David, was my great grandfather – and so a connection started between Anthea and myself and grew over the years. There is some controversy about who had the flag, as there is one account that says Rev Bailey took it and it was kept in his family for many years. 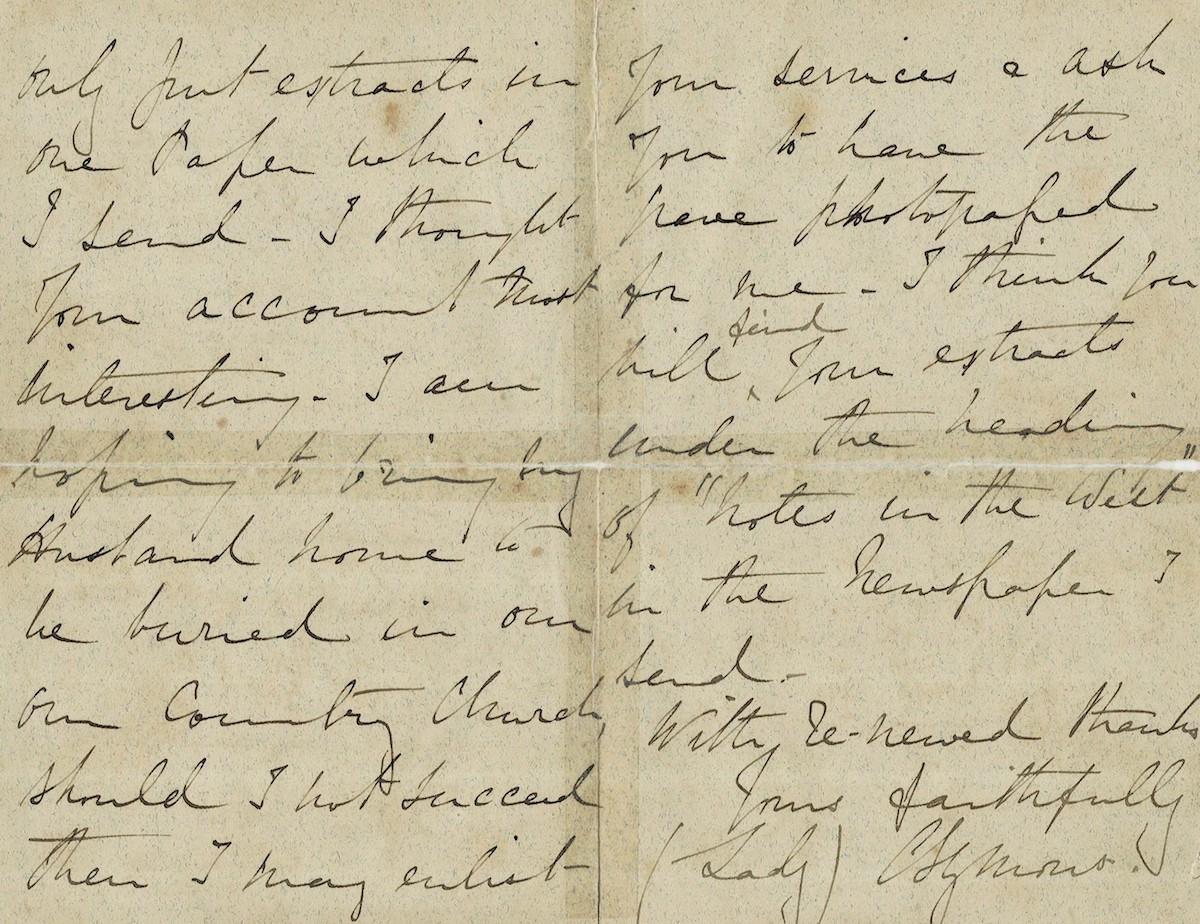 The flag was sent to our museum about 2 years before I started work in 1983 and no-one can recall who sent it back to us.

Many years later Anthea decided that the original letter – the reply from Lady Symons to Samuel Jones should be given to me, in my role as family historian – and so I personally own that letter as well as David’s QSA with Talana bar, as a member of the Dundee Rifle Association. A copy of this letter is on display in the museum with the original flag.

Aren’t the strange coincidences in life amazing and the stories behind artefacts equally as exciting?

The flag is Just one of many thousands of amazing items in our museum collection.