Finding the missing link in the Gold Fields Collection 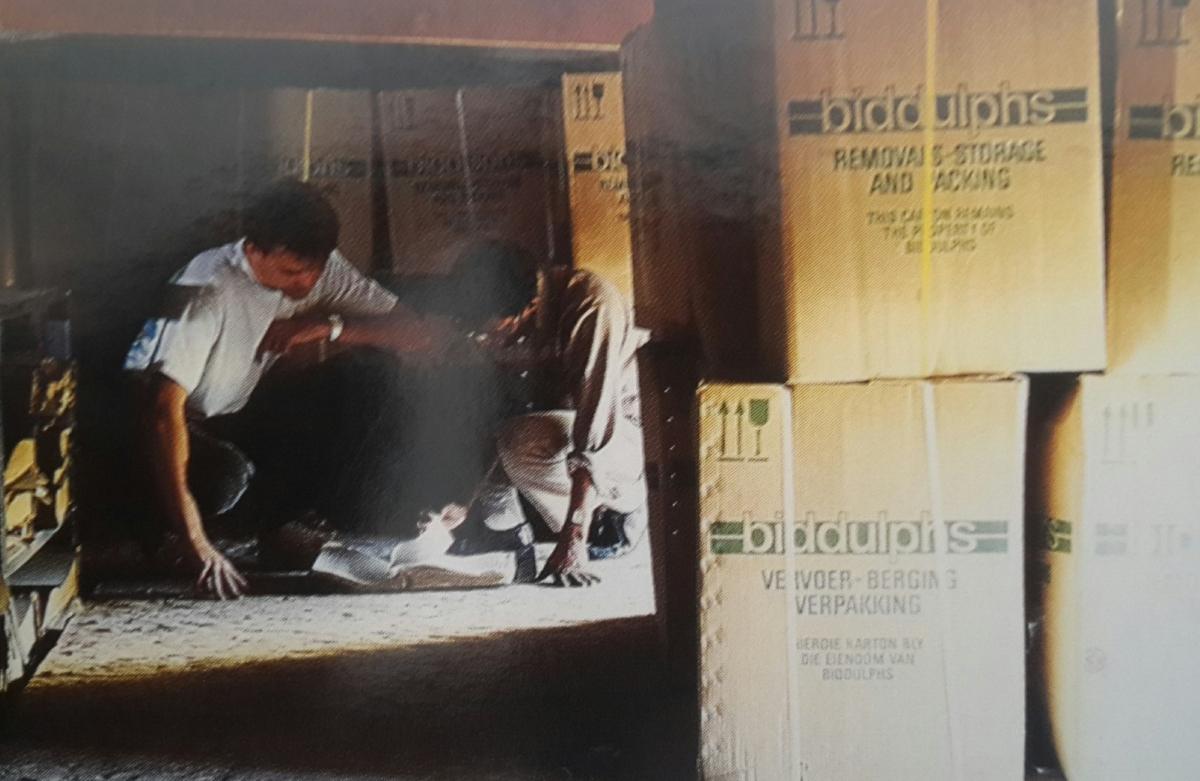 In the article below, first published in the Gold Fields Review 1992-1993, Eris Malan tells the story of the discovery of a remarkable set of documents that filled a significant gap in the priceless Gold Fields Collection. She also traces some of the history behind the Collection including the process that led to the Cory Library at Rhodes University becoming the custodian. The article has been shortened by The Heritage Portal Team.

The Cory Library for Historical Research at Rhodes University, and the Gold Fields Collection in particular, owe their very existence to the right combination of "what ifs".

What if Sir George Cory had dedicated all of his research time to chemistry and none to history? What if the University of the Witwatersrand had accepted the offer of the Gold Fields papers and artefacts? What if environmental conditions at Luipaards Vlei Estates store had led to the destruction of an historical chain - the vital documents which eventually filled 192 packing cases?

The net result would have been no Cory Library, today one of the most important and varied sources of southern African history. The Cory would also have been denied one of the most complete collections of documents, books, photographs and memorabilia reflecting the mining, financial and economic history of the past hundred years.

Masses of material representing the empire-building phantasmagoria of Cecil John Rhodes is contained within the walls of the Cory Library. It is all there, from the signing of the concession with Lobengula to the minutes of the first board meeting of Consolidated Gold Fields, the acquisition of the East Rand goldmining giants and, later, the uncovering of the mineral wealth of the Far West Rand to a makeshift assaying scale made of two Nugget polish tins.

Front page of the original prospectus in respect of the first public offer in shares of Gold Fields - Gold Fields Collection.jpg 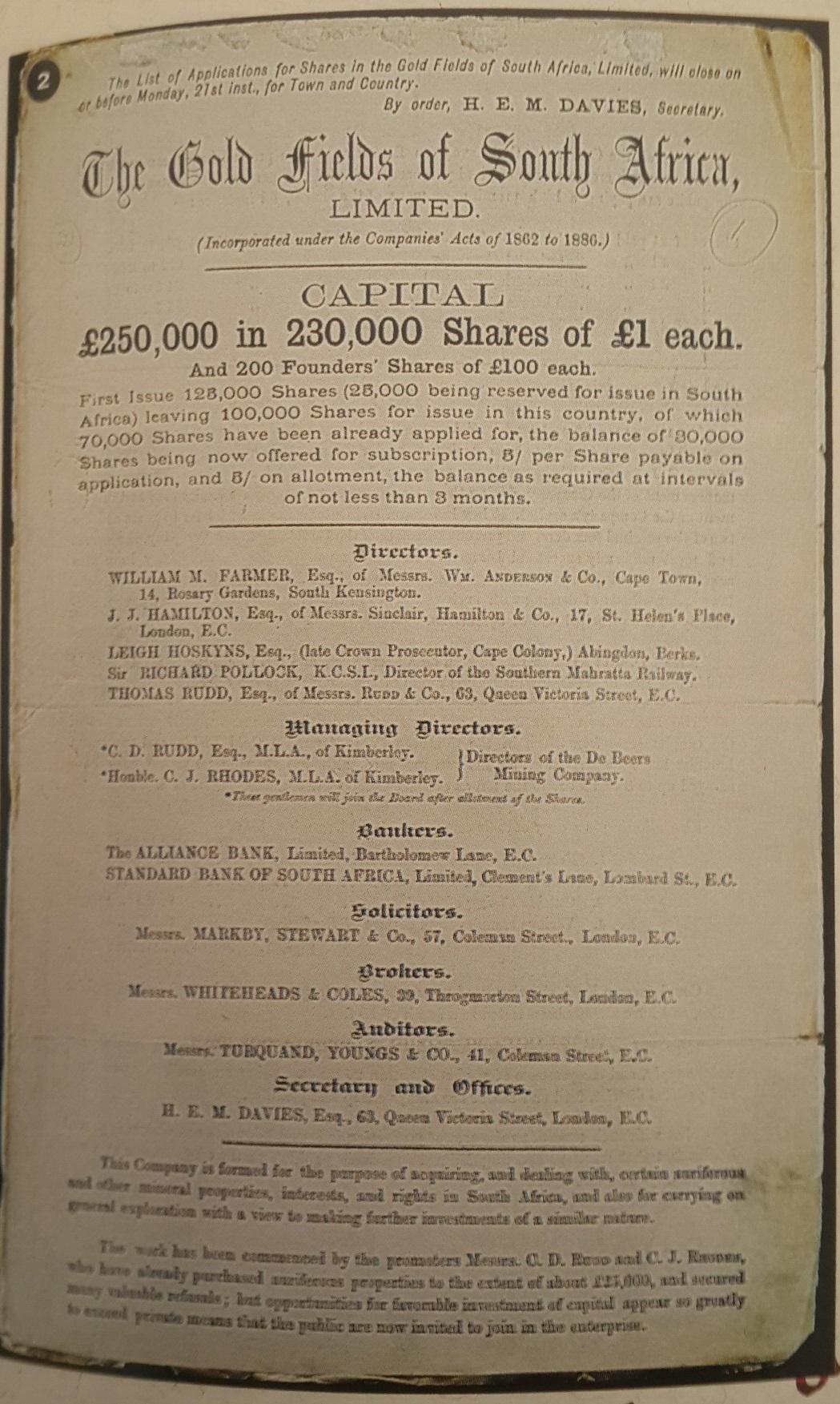 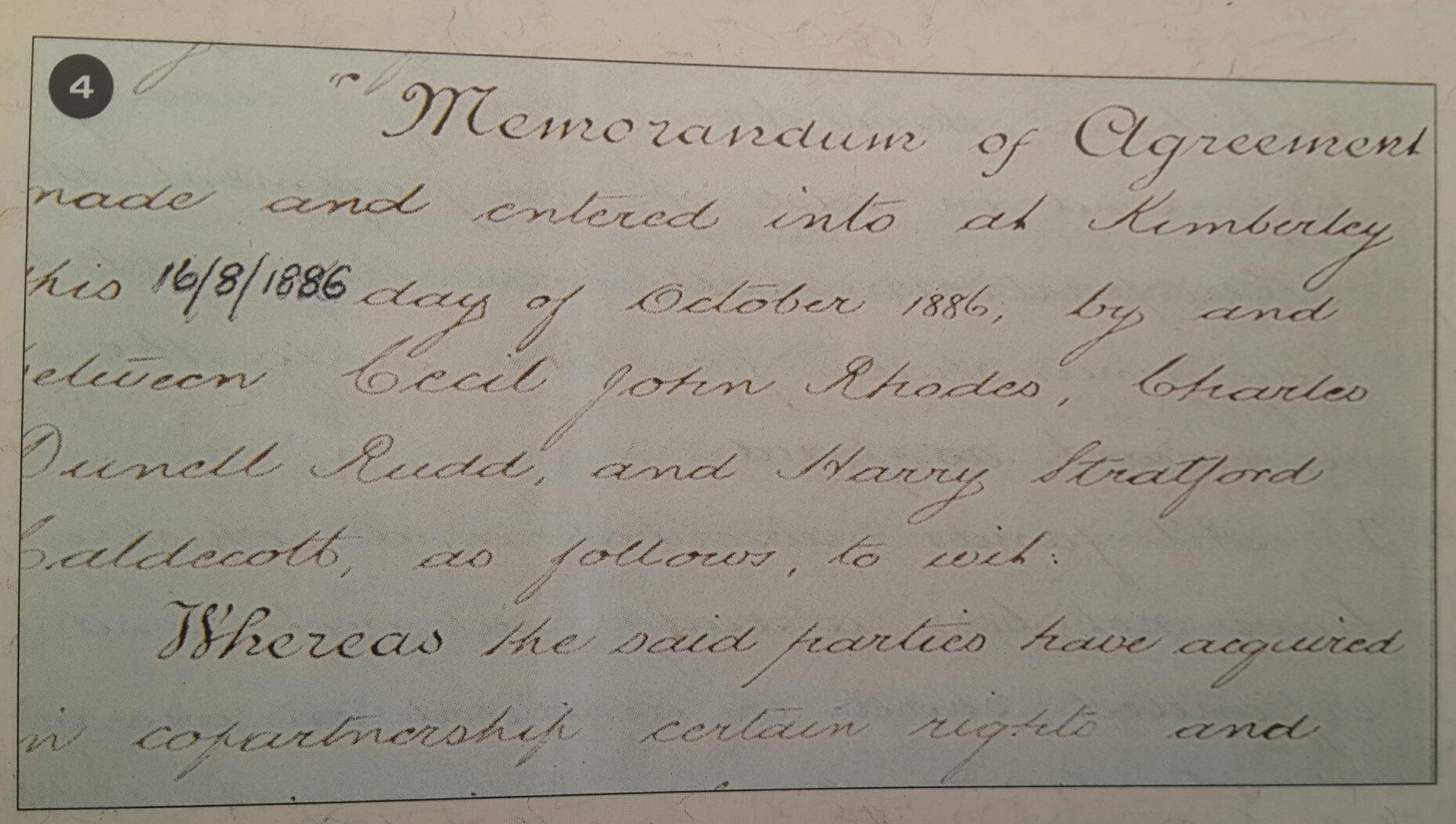 The memorandum of agreement by and between Cecil John Rhodes, Charles Dunnell Rudd and Harry Stratford Caldecott signed at Kimberley on 16 August 1886 (The Gold Fields Collection)

The Library bears the name of Sir George Cory who occupied the Chair of Chemistry from its creation in 1904 until his retirement in 1926. It would seem the alchemy of past events excited his imagination as much as the fluids bubbling in his laboratory test tubes. His hobby soon dominated his life and he is today remembered as one of the country's pioneer historians.

It is ironic that a library for historical research should become his monument and that in his chosen profession he is little remembered. It is even more ironic that that in 1975 the Chancellor of Rhodes, Dr William Busschau, a former Chairman of Gold Fields of South Africa, thought it fit to offer the Rhodes memorabilia and documents to Wits University.

The mining industry had had its training epicentre in the old School of Mines, which later became Wits University. So it was logical that the bequest should be made to this institution and not Rhodes, the university which bore his name.

But Fate decreed otherwise. The Gold Fields documents were destined for the Eastern Cape. Wits turned down the offer and the Chancellor brought the gift to his seat of office. Rhodes University leaped at the opportunity and, as they say, the rest is history.

The bequest comprised books and documents relating to the foundation and early days of Gold Fields, maps, plans, photographs, pamphlets and a small collection of related artefacts. They covered broadly the period 1887 to the late 1920's. 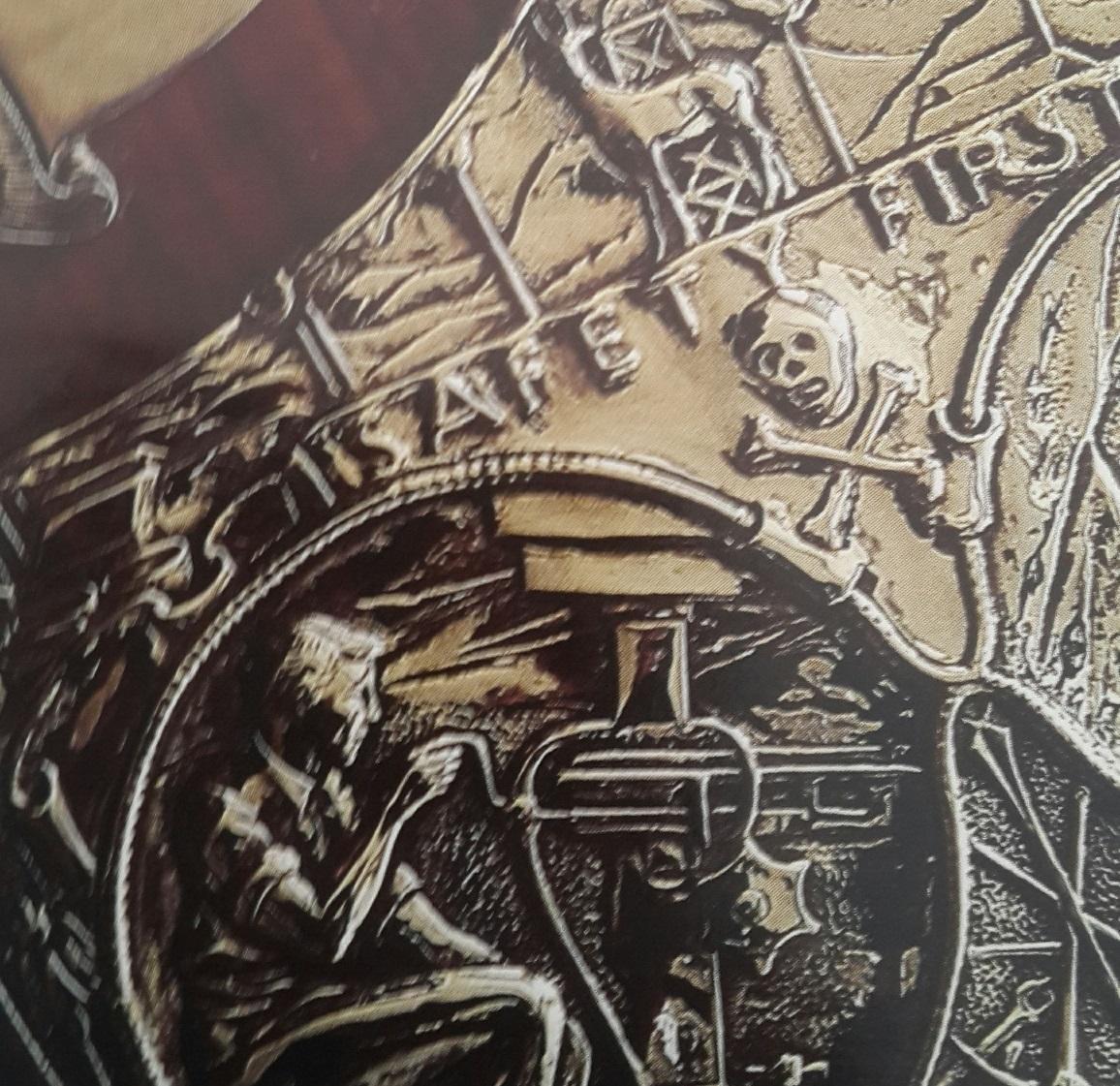 In the intervening years, further items from the same period have been sent to the Cory Library. These included the archives of the company's Bulawayo office and the records relating to Gold Fields of South Africa Limited held by Consolidated Gold Fields in London.

When the Hanson organisation took over the London operation and dismembered it, the documents were shipped to the Gold Fields head office in Johannesburg. On their arrival, the Cory Librarian was invited to head office to assist with assessing the value of the records and their future fate. As a result, in January 1990, a further invaluable accession was made to the Gold Fields Collection in the Cory Library.

There was still, however, an inexplicable gap in the documentation. Very little remained from the late '20's, the Depression Years, to the end of the Second World War. Rumour had it that some over-zealous young clerk with an over-developed sense of housekeeping, had destroyed the seemingly useless papers. And that appeared to be that. The Cory Library would have to be satisfied with what it had. But Fate intervened yet again.

For many years documents superfluous to day-to-day use were stored in Sub-Basements A and B and the strongrooms of the then 75 Fox Street. Each Division was allocated a space, which they were expected to keep in reasonable order. They soon became the victims of the out-of-sight-out-of-mind syndrome, but took on the grand name of the Gold Fields Archive. They served little purpose, were seldom used and mainly collected dust and cobwebs.

With the passing of time, for most head office staff they also passed out of immediate memory. Occasionally individuals made sporadic searches adding little to the order and less to the condition of the stacked papers. Somewhere in limbo, somewhere in Fox Street was a repository for out-of-date bumph. That was as much as most people cared to know.

When, in January 1983, the new head office building was looming large and cavernous next door, the time had come to clear out the basements. Each Division was called upon to box and label its own de trop documentation.

While the employees relocated to a new 75 Fox Street, the boxes of files were unceremoniously dumped in an office and factory block owned by Gold Fields Properties in van Beek Street in Doornfontein. These unexpected, unwelcome and unpaying guests were shuffled around various floors as their floor space was rented out under them during their 18 month sojourn. When their time finally ran out in mid-1984, they were again evicted and moved to Luipaards Vlei.

This relocation proved to be disastrous because a number of boxes belonging to Admin and the Executive were irretrievably lost during the moving operation. It must be borne in mind that the containers were no longer in a good state of repair owing to their frequent moves from floor to floor at van Beek Street. Neither did they look as if they contained articles of priceless value.

The spirit of goodwill in December 1984 moved someone to send two vac students to The Vlei for a fortnight to relabel the boxes and tidy the area allocated to the Gold Fields Archive.

Dr Roy McNab afforded the documents a moment of brief glory when he visited The Vlei in search of material for his centenary volume, Gold Their Touchstone. He found some invaluable material among those dusty papers. 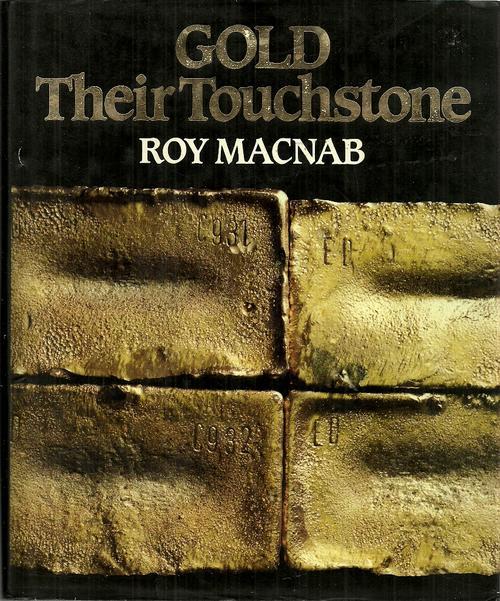 During 1989 a new system for filing documents came into operation in some of the divisions at head office. The move had been prompted by an acute shortage of space. The new system was far more space/capacity efficient and left a number of Zippel filing units free. At last that amorphous mass of paper in a rapidly deteriorating amalgam of cardboard boxes at Luipaards Vlei was to be given a fitting home.

In order to do so, the Admin Division had the boxes brought to one of the basements at head office. The Property Division was instructed to assist with the operation. The area was remeasured and drawn out in CAD on a computer. The best possible usage of the area had to be planned using these Zippel units.

First the different divisions had to come and sort out their material and retain what would still be of use to them. Some come promptly, others took far longer - the best part of a year. The residue was to be relocated to Luipaards Vlei in the newly -acquired filing units.

A preliminary sortie through the boxes germinated a small seed of doubt in the mind of the man in charge of the operation. Could this possibly be the missing body of documentation the Cory Librarian had muttered about on her previous visit?

A desultory search was made by the Divisions and they removed whatever they felt was important to their present-day operation. What was left was considered to be "so much junk". With some measure of trepidation the Cory Librarian was bidden.

Many questions arose in the minds of those who had opened the Pandora's Box. Were they bringing the Librarian on a fool's errand, and if not, worse still, how would she react to the seemingly cavalier way in which Gold Fields had treated its historical documents?

Sandy Rowoldt came hot-footing it back to Johannesburg. She could hardly believe her luck. "It was like becoming an instant millionaire,"she said. "Quite overwhelming, more than a little unreal, but absolutely wonderful."

The "missing link" had been found and quite miraculously the documents appeared to be in reasonable condition. It would appear that most people outside historical libraries have a rather vague sense of when a document becomes "history". Few realise that what they are living today is history in the making and evidence of it should be preserved. The bumph of yesterday is so much clutter, taking up precious room. There is no longer space available to fit our present-day lifestyles.

Most things, except the physical stature of people, have tended to become smaller, less commodious in manner, time and size. To meet bigger demands of larger and greater numbers of people, existing resources have to be shrunk to go around.

The missing Gold Fields documents fell victim to this clutter syndrome. They had no current use, but could not be thrown away in case they might be needed. So they were stashed in the best available storage space - the disused store at Luipaards Vlei.

Then the war intervened and there were more important matters demanding attention. The pile of documents was simply added to. The Vlei became the repository for immediately-out-of-date papers. The pile grew and the historical gap at the Cory Library widened.

Small wonder that the Cory Librarian thought she had hit the jackpot when the junk papers were exposed to the light of the the last decade of the 20th century.

Under supervision the papers were packed into 192 spanking new cartons and shipped off to Grahamstown. Bridging the gap on the Gold Fields documentation has been one of the most exciting projects the library has ever had. 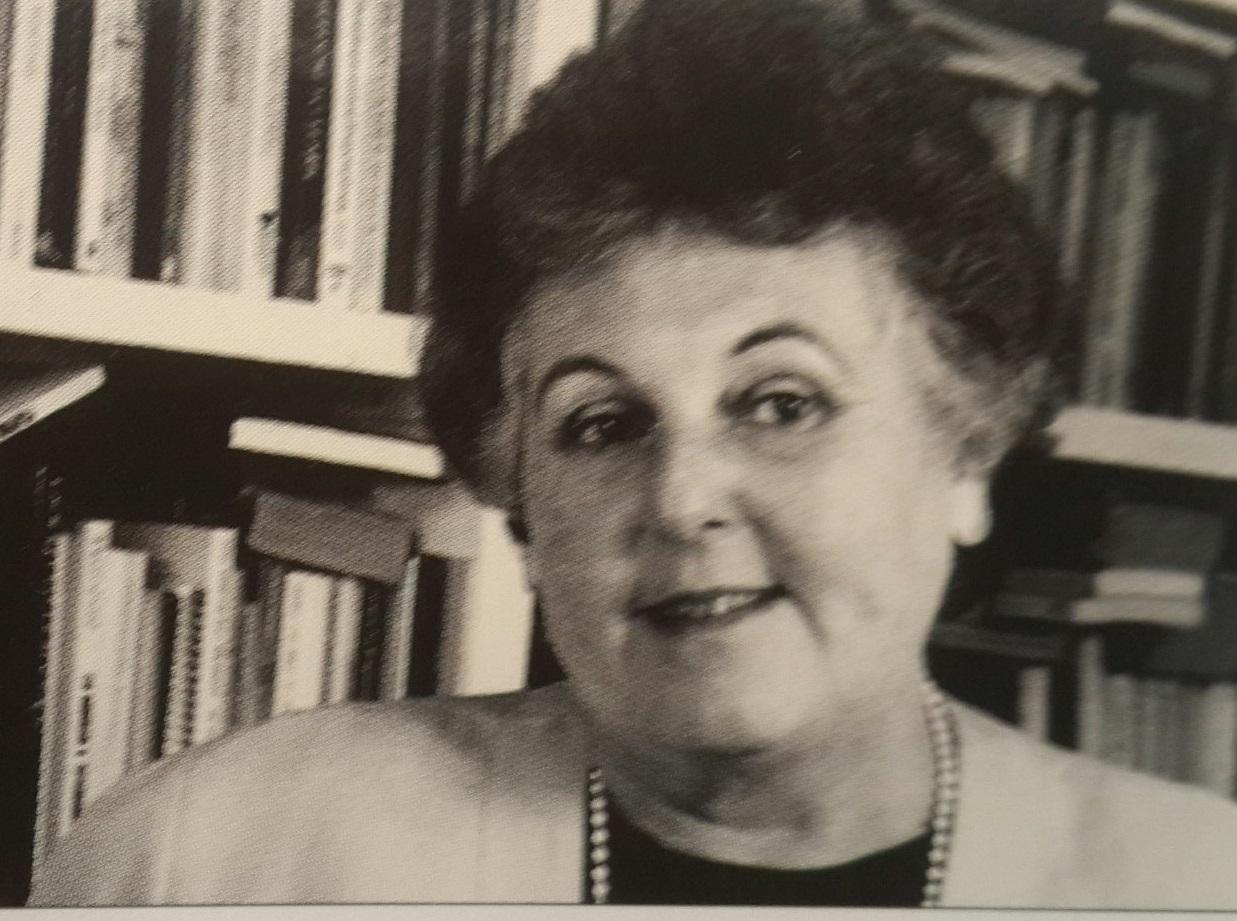 Eris Malan, editor of the Gold Fields Review in the early 1990s