Rosendal - A townhouse complex in the Highveld vernacular

Rosendal is a townhouse complex in the heart of Rosebank, designed by the Johannesburg architect, Michael Sutton, in 1988. With only 16 units in two rows of semi-detached double storey houses, the complex is quintessentially understated. It nonetheless represents a significant contribution to the architectural heritage of Johannesburg, being both a refined example of Sutton’s townhouse typology, and also an elegant synthesis of a South African style and postmodernism.

The street façade is unassuming - a simple, white-bagged plastered wall. The staff quarters, above the garages, sit a few meters back from the street boundary and span the main entrance to the complex, creating a simple Porte cochere. The street facing windows in this building are deeply recessed, providing privacy for residents and emulating the thick walls of early Cape Dutch farm houses.

Beyond the entrance is a car courtyard lined with garages and more pergolas covered in creepers, again mimicking the vine-covered structures of Cape wine farms. Leading from the courtyard are a pair of passages that provide access to the two parallel rows of semi-detached double storey houses, which run east to west down the slope of the ridge and perpendicular to Bath Avenue. The units have identical gabled roofs, but this repetition is offset by variations in the placement and size of the upper storey windows. The entrance to the north passage is marked by a corbelled brick doorway which is visible from the gate, but the path doglegs afterwards, offering seclusion from the street. Along this passage there is also a communal garden and swimming pool. 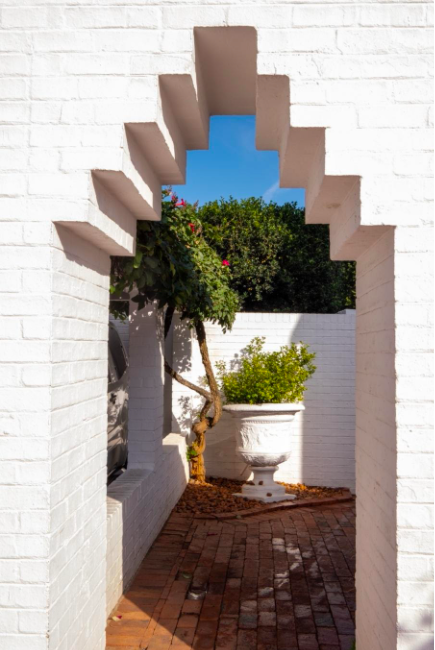 Rosendal was not designed to be ostentatious or lavish. Although more recent apartment buildings in Rosebank have targeted high-income professionals, the Rosebank of the 1980s was more middle-class and townhouse living was not yet popular. Many of the details of Rosendal were, therefore, chosen to be economical, with a simple and clean aesthetic visible in the use of materials such as corrugated-iron roofing, redbrick paving, bagged plaster walls and pergolas constructed with concrete lintels. Simple geometries abound, from the linear rows of houses, to the square courtyard gardens, to the triangular gables that stagger down the hill. These elements contribute to the timeless quality of the buildings.

Rosendal represents a townhouse concept that Sutton pioneered with his partner, David Walker, in the late 1960s, starting with the Courtyards in Craighall. Its main elements - double-storey row houses in parallel blocks, enclosed private gardens and paved walkways connecting the units - were so successful that Sutton would repeat it in other schemes, with Rosendal being a late example of the typology.

Rosendal - Gable ends over the garages and a pergola covering the carport on the right - Brenda Williams.png 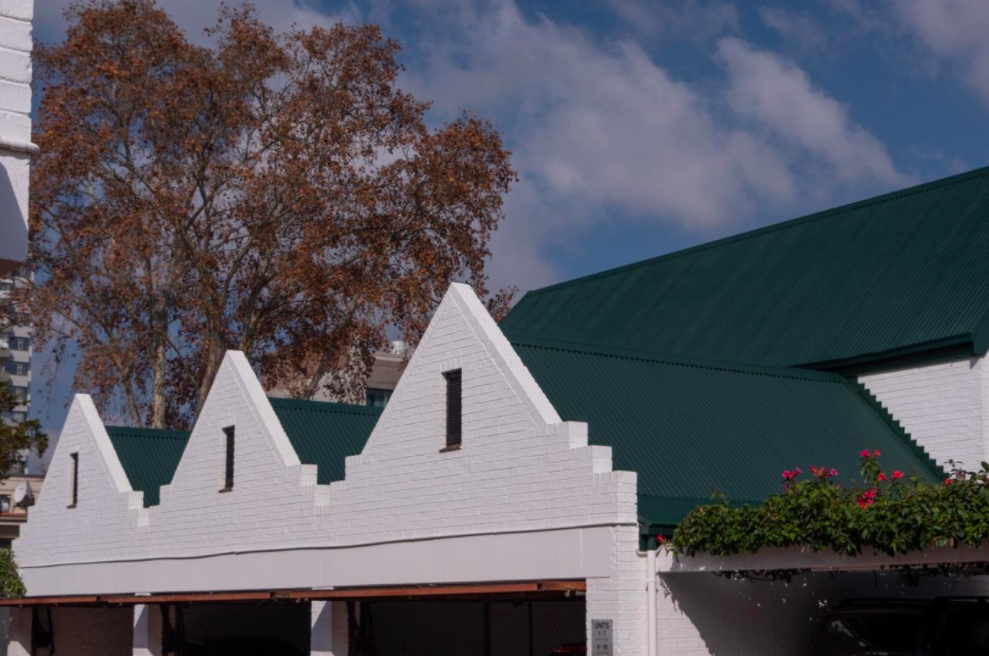 Each house is identical in plan, with a recessed front door and a guest toilet on the right. There are three bedrooms and two bathroom upstairs, and a kitchen and open-plan living area downstairs. Each unit opens onto a private walled garden through large glass sliding doors on the north side of the house, a feature mirrored on the south side with smaller sliding doors connecting the kitchen to a service courtyard. The private gardens each have a small patio with a pergola above, constructed from concrete lintels, repeating an element from the communal spaces. On the upper floor the gabled roofs are used to significant effect with skylights over the staircases and high ceilings throughout. For the bathrooms, light and ventilation is provided through dormer windows that lift the roof line slightly but are cleverly concealed in the middle of the roof, hidden by sightlines. As a result the upstairs rooms are light and airy despite their fairly modest floor area.

Rosendal combines elements of a neo-Cape-Dutch style, part of a larger effort by local architects to develop a South African style, alongside aspects of postmodernism, the dominant global design aesthetic at the time. Cape Dutch elements include the white walls, gabled roofs and quarry tiles, as well as the thick bronze aluminium sash window frames, intended to evoke timber windows. Postmodern details include the clean lines of the gables – with flush eaves – as well as the corbelled brick entry way to the north passage. The houses also include some built-in furniture, in line with the modernist tradition. At the foot of each staircase is a platform that serves as a hall table, followed by a curved plinth where the staircase turns to meet the upper floor. The upstairs landing also has built-in storage that acts as a balustrade. All of these features are finished with square brown quarry tiles.

Michael Sutton was born in South Africa but educated in England, as he and his sister had been born deaf. Sutton returned to South Africa after World War Two to study architecture at the University of the Witwatersrand, although he was also working for Steffen Ahrends where he learnt to love honest materials and proportions based on the human scale. He graduated in 1956 and established his first practice in 1961 with John Griffiths, followed by an enduring partnership with David Walker. Along with architects such as Stanley Saitowitz, Sutton’s work contributed to the development of a Highveld vernacular, a modern South African style. In the late 1980s he moved with his long-time companion, Tom Russell, a journalist, to Greece.

Rosebank is a small suburb that lies between two major north-south arterial roads, Jan Smuts Avenue and Oxford Road. It has seen significant change over the past century, with multiple waves of development and densification. It has always been a transport node, first as a tram stop and then a bus terminus. From the 1920s 4-5 storey apartment blocks were erected in the area, principally down Tyrwhitt Avenue. From the 1960s these were supplemented by the development of commercial office buildings. Once a major thoroughfare, the top of Tyrwhitt Ave was closed off to vehicles in the 1970s, and a section of Cradock Ave was similarly pedestrianized and incorporated into the mall in the 1990s. 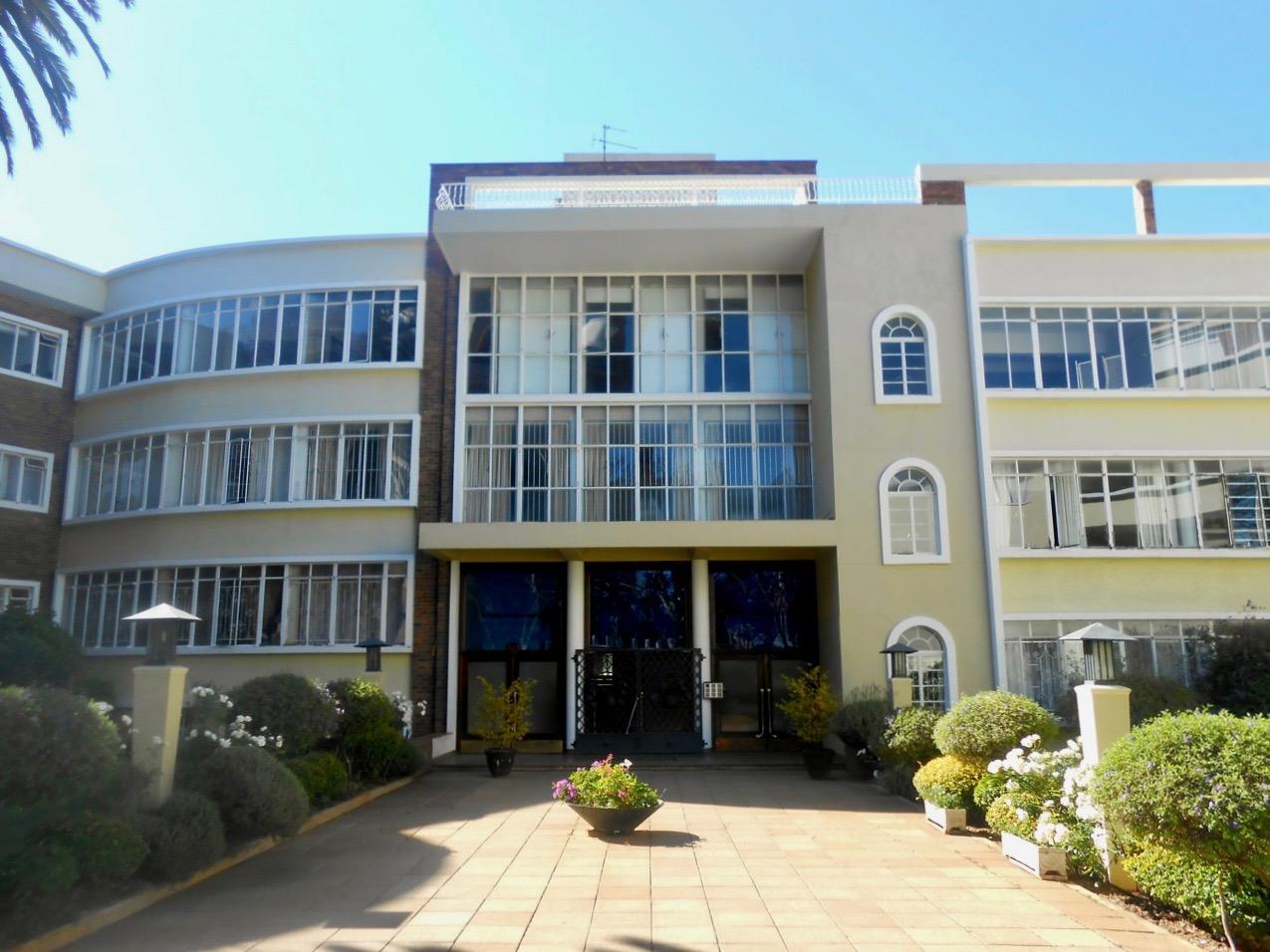 Broadlands, an iconic apartment block in Rosebank (The Heritage Portal)

Today the area’s prime transport connection is the Gautrain underground railway, completed in 2011, and the minibus taxi rank, in Cradock Avenue. There are three large shopping complexes and several smaller retail buildings clustered around the commercial centre, and the area also hosts three schools, a public library, a police station and a private hospital. Rosebank is popular with tourists and features several hotels. 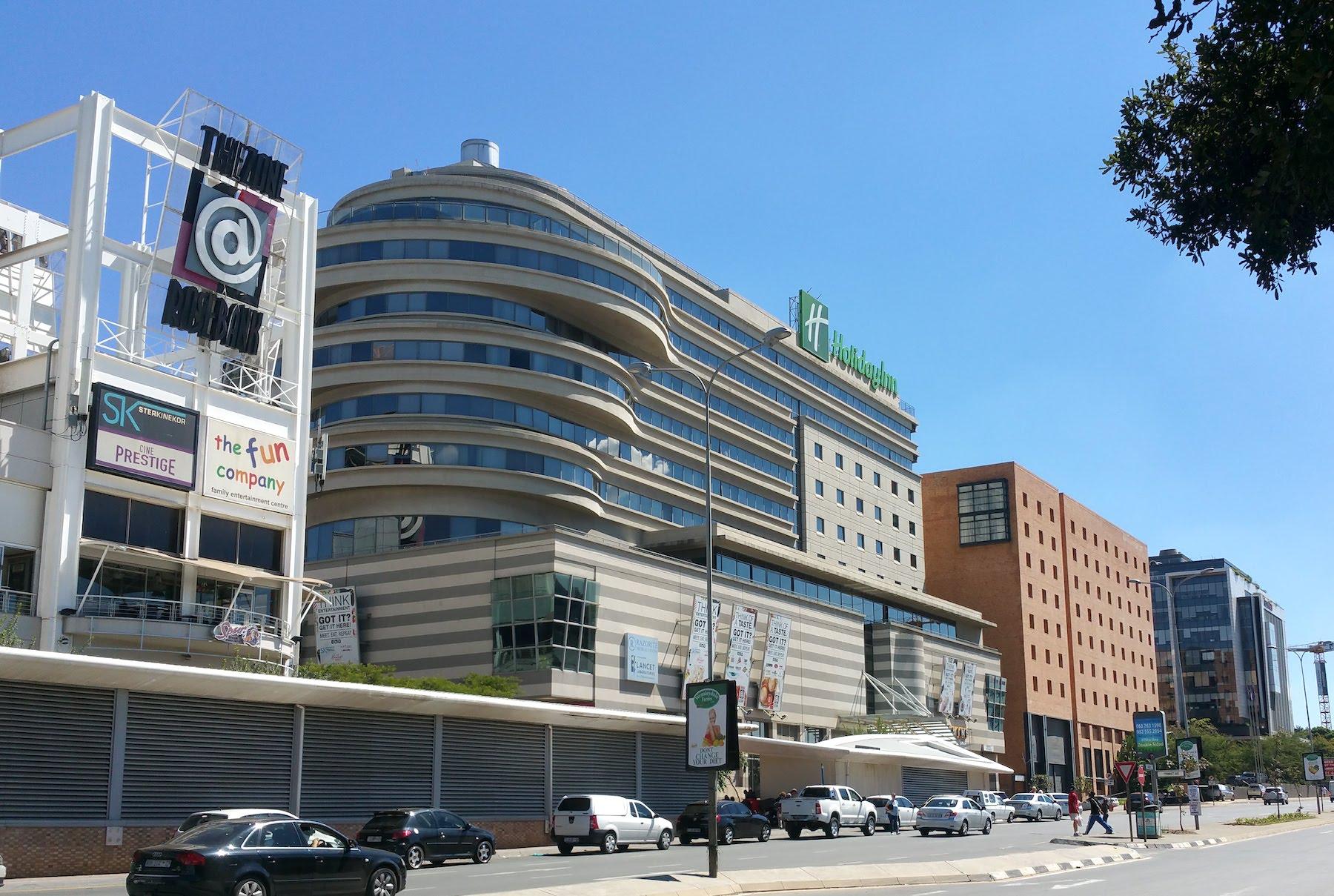 Michael Sutton’s work was instrumental in the development of domestic architecture in Johannesburg and his contribution is embodied in Rosendal. With almost no alteration, residents continue to live and enjoy the spaces that he created a generation ago. There is so much integrity in his materials, and longevity in his geometries and design, that the complex continues to flourish in a busy and fast-changing landscape.

About the author: Alex is a Senior Researcher at the Gauteng City-Region Observatory. Her research is directed at the everyday practices and activities occurring in the city-region. She has an interdisciplinary approach, drawing on multiple research disciplines and theories. She believes in the power of storytelling and is inspired by recent innovations that combine data, narratives and rich visual imagery.