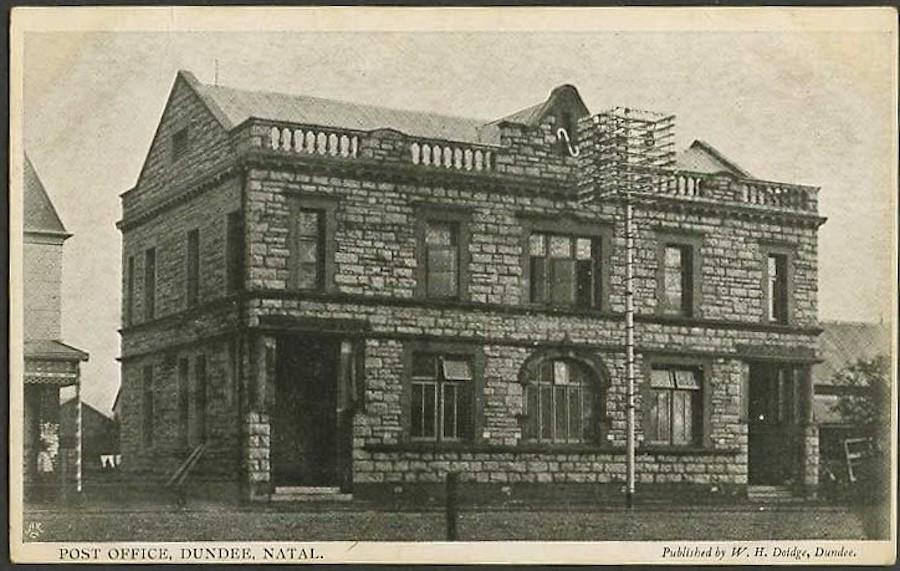 Remember the days when you actually went to the Post Office? When you actually posted a letter? When the Postmaster knew everyone by name? When the Dundee Post Office was a beautiful old sandstone building located just down from the Royal Hotel, where Stockowners now stands. Before it was demolished and the successor built next the Cop Shop.

Herbert Henry Paris was appointed as a Special Clerk, Telegraph Department, with effect from 19 December 1888. He became Postmaster and Telegraph Officer at Dundee with effect from 01 January 1898 and joined the Dundee Town Guard at the outbreak of the Boer War.

The following is an extract from “The Simple Man” by Gordon Everson:

At the outbreak of the Boer War the Postmaster of Dundee, Natal, was Mr. H.H. Paris, a Liverpudlian of some 33 years of age. Favouring winged collars and ties with knots four inches across, he was tall and a bit of a swell. Monocled, with carefully barbered curly hair, his generous moustache was neatly clipped. Educated at Liverpool College, he trained as a telegraphist in the Liverpool Post Office.

An opportunity arose for a Telegraphist in South Africa and Paris applied for (and obtained) a position at the Durban Post Office. He spent a couple of years in Durban before being invited to take the position of Private Secretary to the Postmaster General of Natal, (based in Pietermaritzburg). His next step took Mr. Paris to Dundee and the position of Postmaster.

… the Boers arrived in strength on 19 October. In this threatening situation, Paris decided to sleep in his office and early the following morning he was rudely awakened by one of his clerks to be told that the Boers had commenced operations. They could be seen crowding the hills to the east of the town and, dressing hurriedly, the Postmaster was in time to see the first enemy shells overshooting the Post Office as the Boers tried to find the range of the army camp. In a letter to his father he stated:

"From the office window we could see them (enemy shells) ploughing up the ground. Owing to bad fuses only a few of them burst. Then our artillery came out at a gallop past the Post Office and we gave them a ringing cheer… (they) started shelling the Boer guns which (were) … soon put out of action. Then they directed their fire on the crowded mass of Boers on the summit who could be seen running… but time after time they returned. The shelling (lasted) 7 ½ hours and how the Boers stuck to their position is a marvel.

I was near the artillery the whole of the day and saw a bugler’s head blown off … his brains and blood were diffused over his horse’s flanks (this would have been 23187 Trumpeter W.B.F. Horn).

I went over the battlefield and saw the dead and wounded. I saw General Penn-Symons brought in mortally wounded in the stomach. He was suffering intense agony and craved champagne or whiskey…. I went up the hill with the burial party… Eight officers lay in an outhouse of Peter Smith’s farm. In another were twenty-two men all lying like waxwork models but exhibiting the most frightful wounds. Some had their eyes torn away, others their jaws…”.

They kept up telegraphic communication with Pietermaritzburg the whole day, the Postmaster General congratulating them on sticking to their posts since the Camp Field Telegraph had bolted the day before.

Shortly before midnight a military scout saw lights in the Post Office and came to investigate. Surprised to find civilians still in Dundee, he told Paris that the troops had already pulled out. They crammed the registered letters into the safe and left carrying about 200 Pounds worth of cash and stamps.

They caught up with the last wagon and walked in the rain, splashing through mud and slush to Ladysmith. On the move from Sunday to midday Thursday they were exhausted and starving, having covered about 70 miles over broken, hilly ground, mostly after dark. Paris later said that he “would not debate on the miseries and discomfort of that jolting journey.”

“Review of the Week”, a contemporary journal by Hamish Henry, summed it up as follows:

The Postmaster at Dundee… was suddenly plucked from the sale of postage stamps to play the part of hero. He was a man indispensable, the connecting link between a field force in extreme danger and its supports in Ladysmith. Again and again he faced the shells from the enemy’s guns in order to get the messages over the wires to General White. Yet… he does not dwell on the danger. His pride… is centered in the fact that he did his duty. He did not panic when he and his men had been abandoned. Coolly, he collected cash and stamps. There is a simple hero in action. 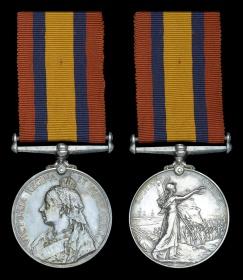 There is a report in the Courier of the discovery of a bag full of registered letters amongst the detritus found in the Courthouse after the re-occupation of Dundee. The bag had apparently been dispatched by train before the fall of the town but intercepted by the Boers, who left it, in the Courthouse and promptly forgot about it. All 47 registered letters were duly delivered to their intended destination, albeit a little late!

The Natal Almanac 1903, tells us that Mr. Paris was still the Postmaster and Telegraph Officer @ Dundee. His staff consisted of Messrs. A.E. Harmer; J.A. Clark; T. Clarke and C. Maidmont.

The Dundee and District Advertiser of 05 March 1902 notes that Mr. Paris was charged with “furious riding” in Victoria Street and was warned and cautioned.

Two weeks later, on 19 March, he had “received instructions from the Postmaster General to prepare a report on the advisability of carrying out a house-to-house delivery system for letters”. Revolutionary, to be sure!

He was appointed Acting Head of the Postal and Telegraph Department, Ladysmith, while the Postmaster was on leave 01 August – 14 December 1902. The Dundee and District Advertiser of 23 July 1902 noted that “The appointment, we understand, is a temporary one, and Mr. Paris will probably return to Dundee. At any rate, we hope so, for Mr. Paris’ assistance at entertainments and other local functions could ill be spared”.

Mr. Paris did return as hoped – the Advertiser dated 24 December 1902 notes that “Mr. Paris, Postmaster of Dundee, returned to town on Monday, and resumed his duties at the local Post Office on Tuesday. He is heartily welcomed back”.

The Advertiser dated 19 February 1903 records that:

Efforts are being made by Mr. H.H. Paris, who has always taken great interest in amateur dramatic enterprise, to re-awaken interest in the Dundee Honorary Organist at St. James’ Church (February 1902).

He served as Honorary Secretary Dundee Tennis Club and was a leading member of the Amateur Dramatic Society. A member of the Freemasons, he transferred from the Prince Alfred Lodge to the Biggarsberg Unity Lodge on 07 August 1900. He held the office of Senior Deacon in June 1903.

Dramatic Society, which has become moribund. It is contemplated putting on a good bill at the Masonic Hall at an early a date as possible.