German connections and the overall significance of the Yeoville Water Tower

Kathy Munro's three part series on the Yeoville Water Tower comes to an end with this piece (click here to view the series index). The article highlights the overall German contribution to early Johannesburg and suggests that the German connection to the Yeoville Water might be a reason why its origins were concealed in 1914/1915. The article also sets out the overall significance of the landmark structure. The piece was first published in the December 2018 issue of Architecture SA. Thank you to Paul Kotze for giving us permission to publish.

Dr. Clive Chipkin, in an article in The Star newspaper (23/10/1980) wrote about the prima-facie evidence of German involvement in Johannesburg’s growth. South Africa imported heavy rails from F Krupp of Essen or from BVG of Bochum. Locomotives and steam engines were imported; for example, the firm Reunert and Lenz were agents for imported machines, engines and engineering equipment.

The German presence on the Witwatersrand and in Johannesburg was evidenced by early mining pioneers. Mr. George Albu came from Berlin, Mr. Julius Jeppe hailed from Rostock and Mr. Hermann Eckstein was born in Stuttgart. Mr. Carl Hanau was another Rand entrepreneur of German origin. Sir Julius Wernher was a prominent Randlord, who was born in Darmstadt. He was a key figure in the Eckstein company (Corner House) who later became anglicised. There were many others. German place names were in evidence in early Johannesburg – a Kaiser Street, a Wilhelm Street, Hohenheim the Phillips’ home in Parktown, the forest of Sachsenwald (that later became Saxonwold). The German Lutheran Church in Hillbrow dates from 1912, the German Club the Liederkranz Club on Claim Street dates from 1904. 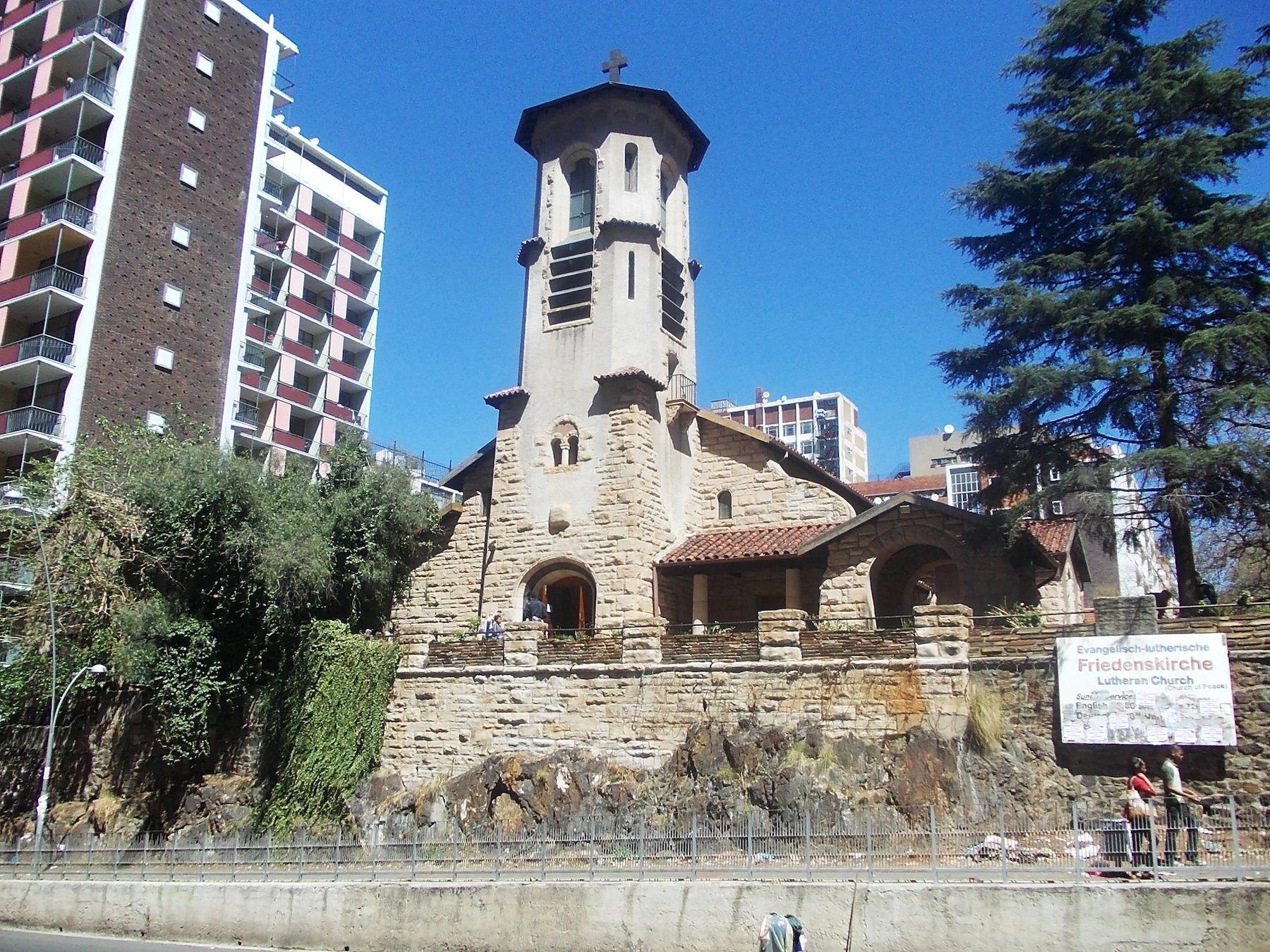 1914 was the year of the outbreak of World War I. South Africa, as part of the British Empire and as an ally of Britain, went to war against Germany and the Central Powers. There were anti-German riots in Johannesburg and Kimberley. The German connections were speedily dropped. For example, street names were changed: Wilhelm Street became King George Street and Edith Cavell Street took the place of Kaiser Street. This could be a reason why the Yeoville Water Tower, as a triumph of German engineering, was ‘lost’ in the reports of the Town Engineer.

Chipkin used his powers of observation in connecting what he saw in Germany during his travels after WWII (he remembers seeing a Klönne water tower near Bochum). He recognised the connection and arrived at the conclusion that there was a German cultural legacy in Johannesburg. But Chipkin was working without the firm documentary evidence the Yeoville Water Tower blueprint now brings to the Johannesburg story. 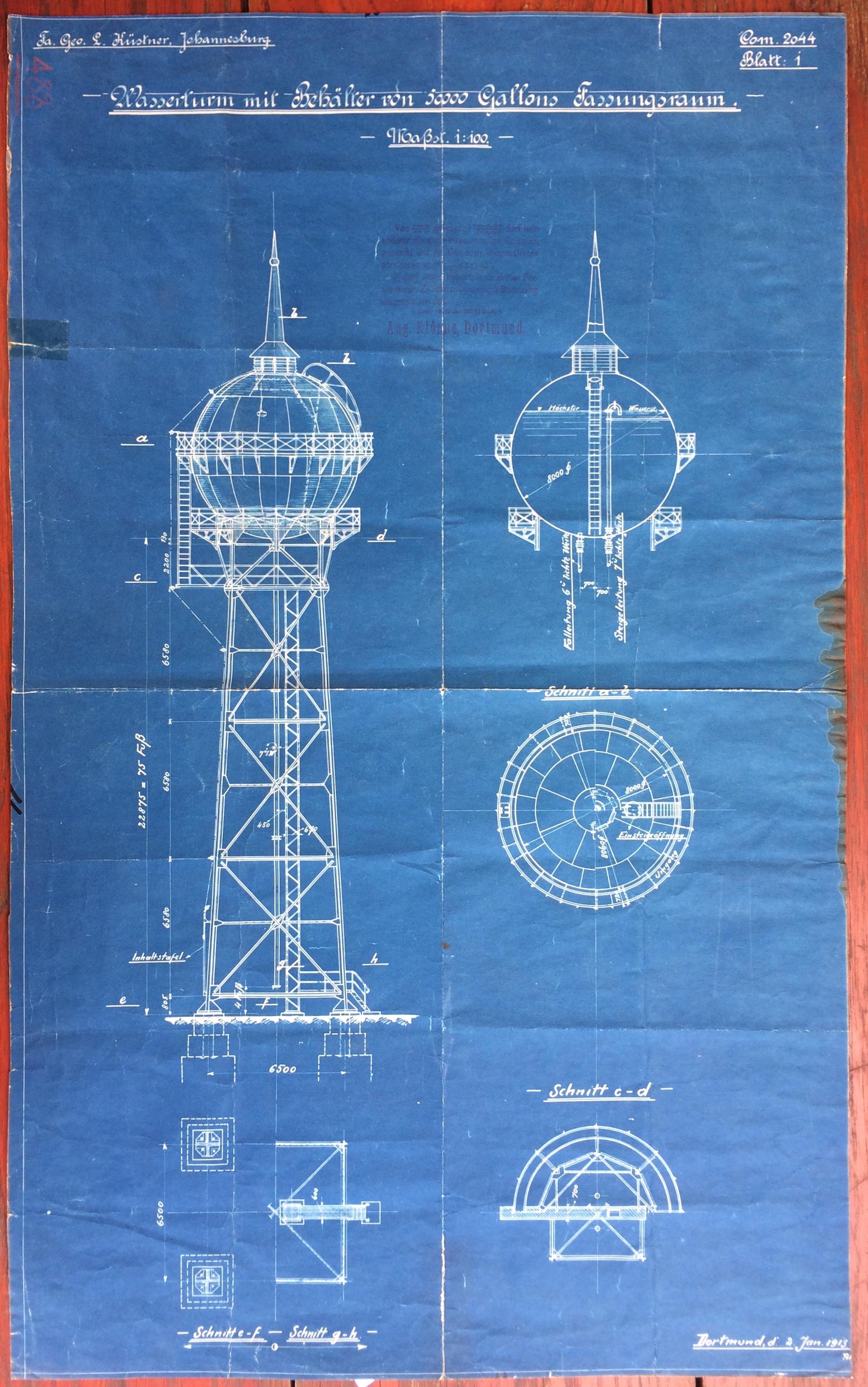 It has been established that Aug. Klönne was an important company name in German industrial history. It is then, that a return was made to search for the now familiar shape of the Klönne water tower and its visible inheritance. Mention has been made of Ahlen but there are many such survivals either in a state of dereliction, or about to be demolished or successfully adapted to new purposes. They date from approximately 1906 to the interwar period, when the concrete type of tower became the new standard norm.  Over time materials and design had moved on. Aug. Klönne water towers are to be found all over Germany and have served railway companies, coal mines and as town water facilities. It is surprising how many of these water towers survived the destruction of the WWII. 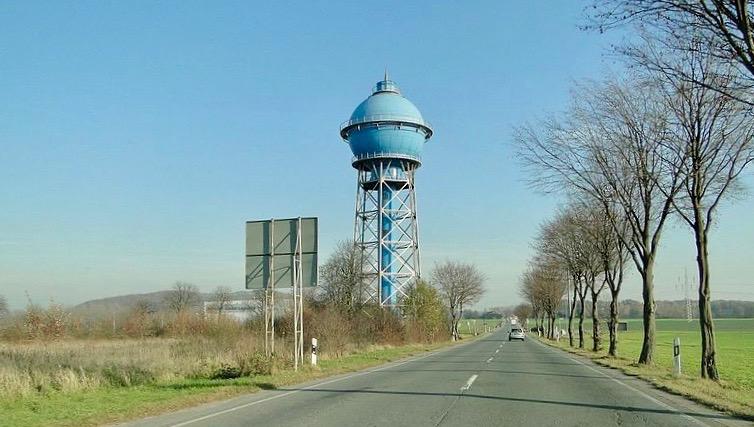 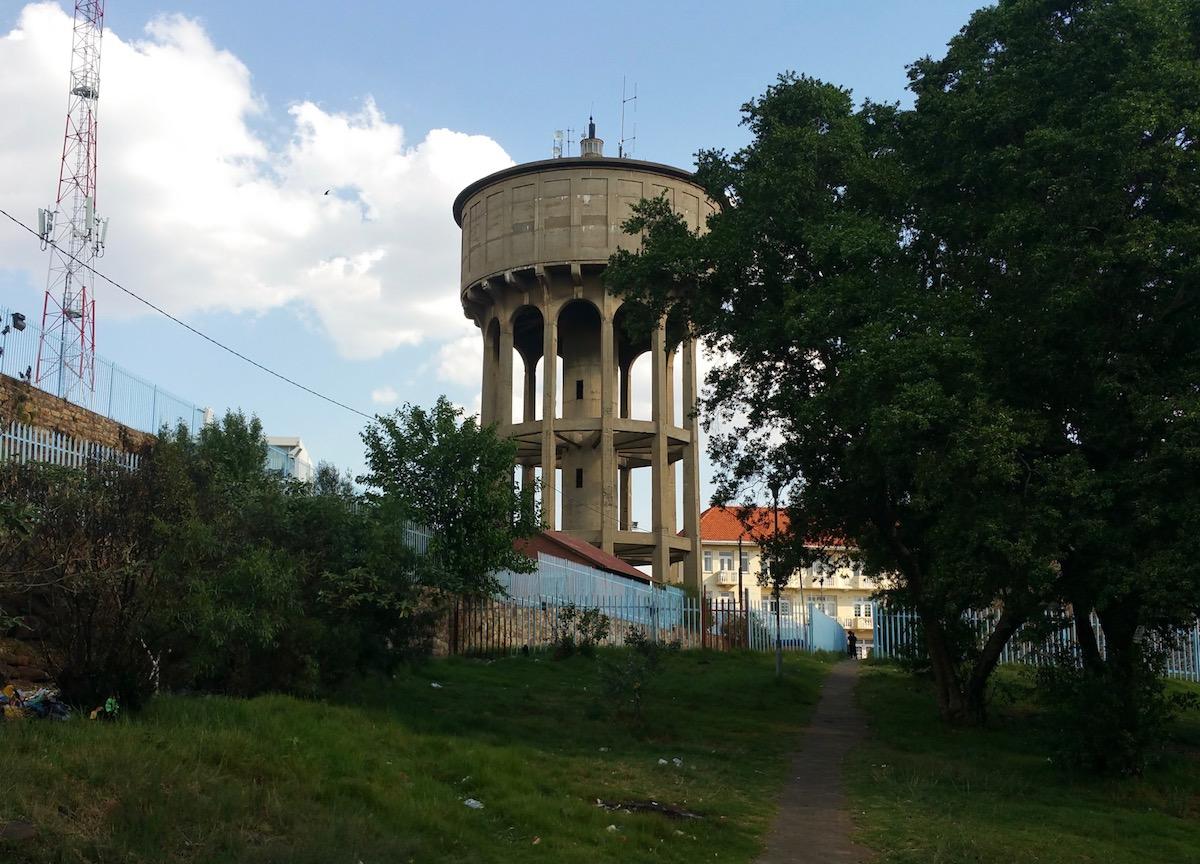 The Klönne presence in China and Mexico.

The international reach of Aug. Klönne is shown in the construction of a water tower in Beijing, built in 1908.

The Peking (Beijing) Water Tower had a particularly interesting history. This water tower was part of the first waterworks of the city of Beijing. It was located near the Dongzhimen Gate, near the Bund in Hankou, in the northeast of the city. It was built for Capital Water Limited, Peking. The height of the tower was 54m, (a height of 6 storeys) and the tank had a capacity of 750m3. With Its tapering lattice steel framework, it was described as a “western style water tower” and “an Eiffel type hexagon plan metal construction”. The tower was demolished in 1957, during a Chinese state drive to recover scrap iron.

There is a Klönne water tower in Celaya, Mexico. It opened in 1910 and was constructed through German presence, finance and initiative. It is called “the ball of water”.  Their “ball” continues to supply water to parts of the downtown area of the city and it survives as a city icon. 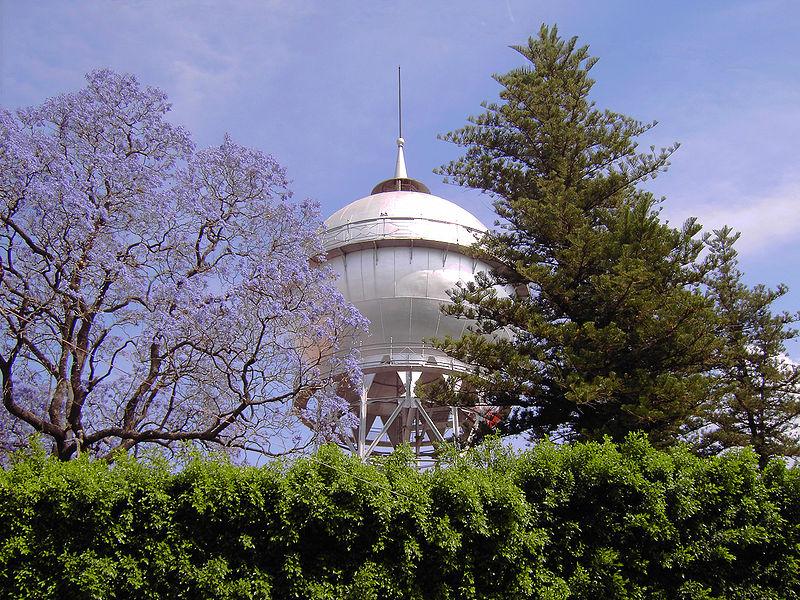 The Klönne water tower is a masterpiece in European steel design and engineering excellence with its careful design of the cross-steel sections and their precision riveting. The riveting used in construction, rather than welding was a distinct engineering advance. Obviously as the size of the tank determined the capacity, Klönne tanks came in various sizes. The construction of the tower as a pre-fabricated structure gives it something of the look of a meccano creation. The easy to assemble framework was part of the simple genius of assembly, appearance and functionality. The tower is both a work of art and a functional engineering creation. Vertical steel ladders and horizontal grid catwalks at the base of the sphere and around the circumference were an integral part of the design. 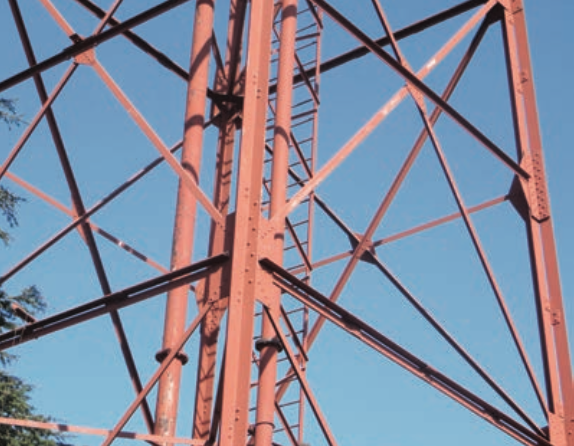 Chipkin is of the opinion that the Yeoville Water Tower was an expression of an industrial design language that influenced the Russian constructivists and the architect Tatlin with their slogan “constructivism is organization” , but he also recognized that the origin was German and not Russian. The rival to the Klönne- shaped tower was indeed Russian, as it was Vladimir Shukhov (1853-1939) an engineer, architect, mathematician and polymath, who designed the first hyperboloid structured water tower for the 1896 All-Russia Exhibition at Nizhny-Novgorod. Shukhov’s hyperboloid towers influenced the later design of oil derricks and radio masts. They were lightweight, elegant and sturdy. So, there is an interesting link from gas tank to water tower design to modern structural engineering forms.

Symbolism and other selected references to the Yeoville Water Tower. 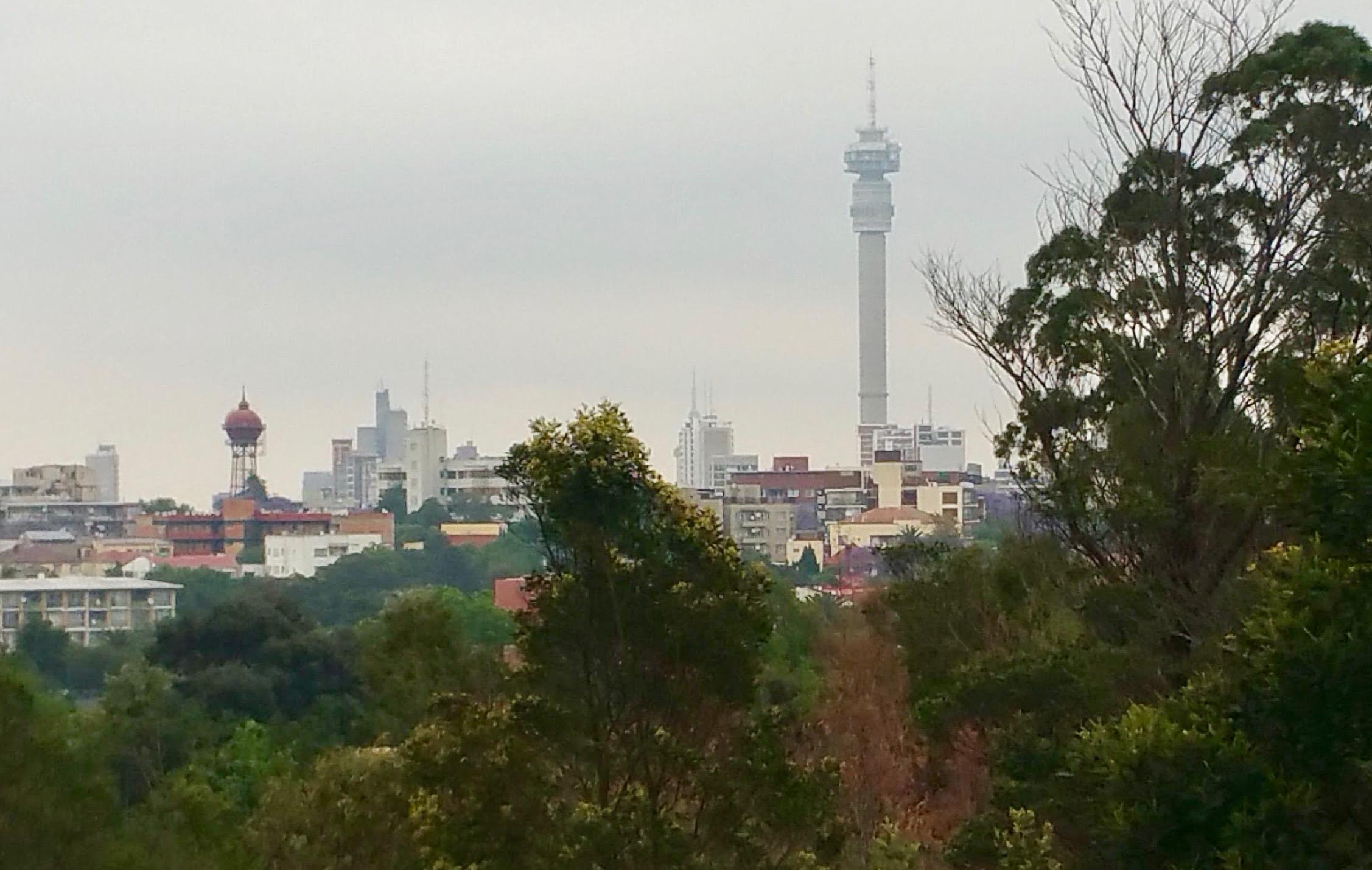 The tower makes an appearance in several pieces of writing about Johannesburg. Ms. Anna Smith clearly loved the Yeoville Water Tower as she led into the letter “Y” in her classic book on street names of Johannesburg, with a sketch by artist, A Cantrell.

Chipkin grew up in the shadow of the Yeoville Water Tower and in his memorable article in The Star (23/10/1980) said of it, “In the 1930s this tower was to Yeoville what the Basilica of Sacre Coeur was to Montmartre - an ungainly towering presence that nevertheless created a sense of place“. In a later major book, (1993), Johannesburg Style, Chipkin dates the water tower as 1906. He described it as “constructivist geometry with Gothic flėche added on”. He missed the date by 7 years, but was correct in recognizing the unmistakable Klönne design even though the archival link to the engineer firm of Aug. Klönne was not known at that date.

In 1984 the Yeoville Water Tower was selected as one of 100 landmarks of the city, in the lead up to the city’s centenary. It was listed as Number 25. The Star got the date wrong and knew nothing about the real history of the tower, but the tower was beloved enough to make the heritage 100 list.

In 1986, in his centenary homage to the city, Mr. Hannes Meiring included a delightful sketch in his Early Johannesburg, its Buildings and its People. He recognises the aesthetic intention of the engineer, without knowing who the engineer actually was.

Ms. Colleen Higgs’s book, Looking for Trouble and Other Mostly Yeoville Stories is a collection of short stories bringing Yeoville of the mid-1980s to 90s to life, and features the Yeoville Tower in the cover design.

A recent undated pamphlet, A Walking tour of Yeoville, produced by the Yeoville Studio/Yeoville Works (a project of the School of Architecture and Planning of the University of the Witwatersrand) included the Yeoville Tower and places the Russian constructivist influence as central.

In 2016, Mr. Aeron Stipanov an Honours student at the University of the Witwatersrand, prepared an excellent report on the Yeoville Water Tower as part of a project documenting Johannesburg under the supervision of Mr. Brendan Hart. This report meticulously illustrated the elevations and the engineering details and documented the tower in drawings and photographs. However, Stipanov did not get back to Klönne and the Dortmund origins. 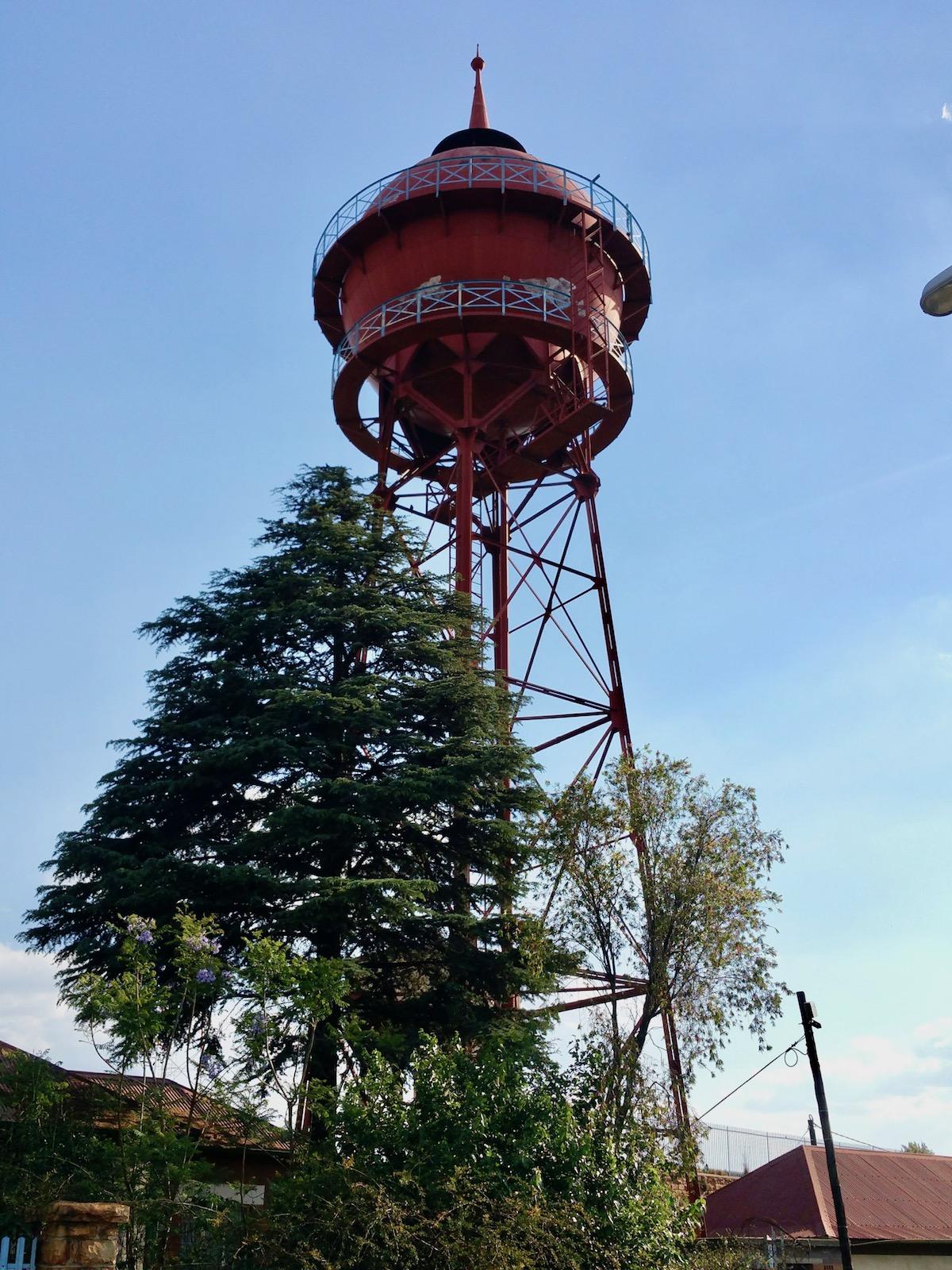 An iconic structure (The Heritage Portal)

It's time for the Blueprint of the Yeoville Water Tower to be revealed for what it is. The Blueprint is the key to the treasure in our midst. Yeoville’s iconic steel water tower stands proud and high on the Yeoville Ridge. It is a heritage treasure that dates back to 1913. At 105 years old, it is time to appreciate the industrial archaeology of Johannesburg and its mining origins and to realize that mine headgear, the Yeoville suburb, the Park Station structure are as precious to preserve as any Parktown baronial mansion.

The tower marks a moment in time when prefabrication and imported steel were necessities for comfort and progress. The design of the tower successfully marries cutting-edge engineering and quality architecture. Finding the blueprint pays due homage to the German influence in Johannesburg’s history.

It is even more surprising that this early water tower has survived, when so many Klönne towers in Germany have been demolished or are in decay. Its familiar rust colour is apt for this striking, simply designed but complicated engineering work of art. It is visible from other ridges of Johannesburg and is today a familiar and prized Johannesburg possession. It is a defining landmark of early Johannesburg. It makes a statement and reflects Johannesburg’s history, its water trials and tribulations, perhaps more than any other structure in the city. 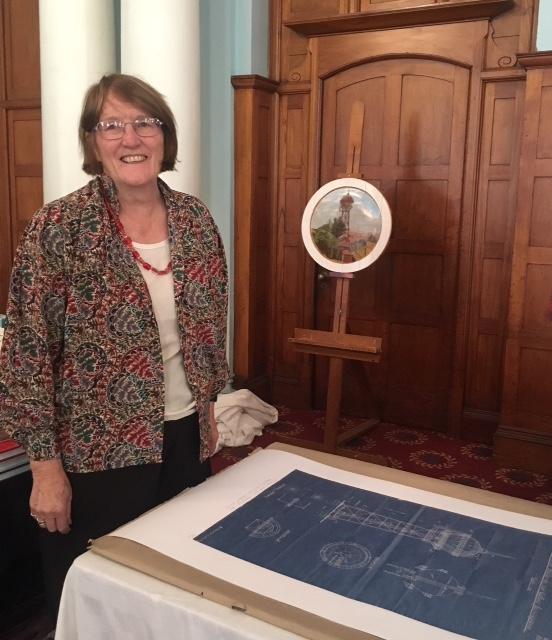 Limited edition prints of the Water Tower can be purchased from the Johannesburg Heritage Foundation (only a handful left). R400 or R500 depending on the number ordered. Email Eira - mail@joburgheritage.co.za.