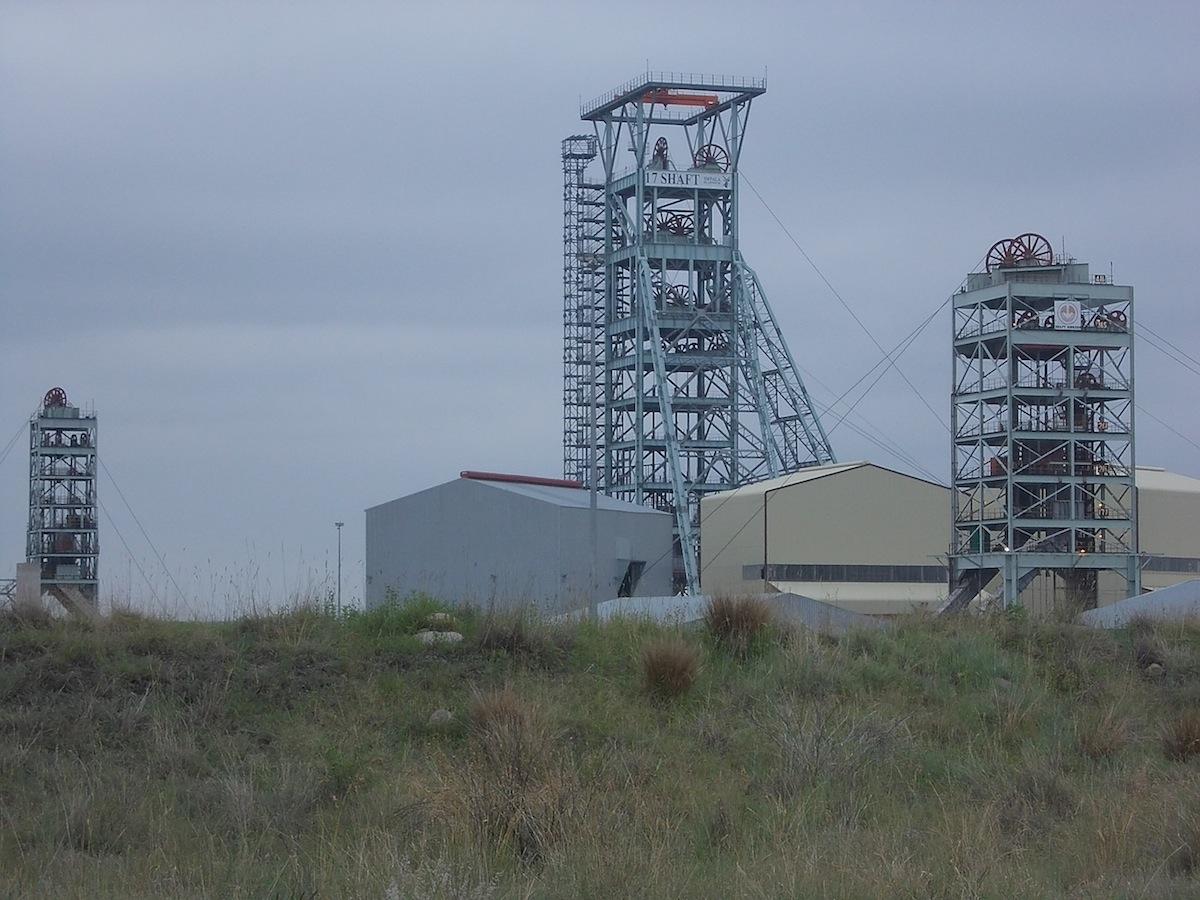 Headgears are the ultimate symbol of the mammoth Southern African mining industry. They tower over billions of rands worth of wealth and help to sustain vast underground cities. They are appreciated by millions around the world and we are blessed to have some of the finest examples. The article below provides an overview of the purpose and significance of headgears.

This article aims to give a brief history and the purpose of the Headgears, which tower over the vertical mine shafts which go deep underground.  The text is written in layman’s terms for the reader unfamiliar with the topic.

The most striking surface manifestation of the intense mining activity underground are the mine dumps and slimes dams, which can be seen at a distance, however on closer approach to a mine the stark outline of the Headgear asserts itself, pure functionality ruling over beauty.

The term Headgear in its broad sense should embrace all structures and appliances connected with the handling of men, material and mineral into and out of the shaft.

The history of deep level mining goes back to the early days of Johannesburg, circa 1887, when the gold mining industry of the Witwatersrand had its beginnings along the outcrops of gold bearing conglomerates to the west of the present city. When the crude surface workings of the prospectors gave way to more systematic mining operations, incline shafts followed the dipping reefs to increasing depths. These early operations were makeshift at best. They lacked solid financial backing and the necessary technical expertise and to make things far worse a problem arose in the gold refining process. Around 1890 a period of consolidation took place and improvements were then made after the “Pyrites Panic” (click here to read more) to gold refining (the McArthur-Forrest cyanide process saving the day). It was also  soon realized that the “Reef” extended much further into the bowels of the earth than originally thought which gave encouragement to sink vertical shafts to depths that were considered great by the standards of the time.

As a result, Headgears rose in succession across the landscape, marking on the surface the course of the workings where men were engaged in mining the conglomerates carrying the gold, which was to become the source of the basic wealth of the country.

The early vertical shafts were rectangular in cross section and were lined with timber. The first Headgears were also of timber construction, but as the depths of shafts and the payloads of skips increased, steel became the material of choice, with which to construct a Headgear.

As time went by, through the Jameson Raid, the Anglo-Boer War, the First World War, the 1922 Miners’ Revolt, the Great Depression and the Second World War, mining technology had advanced greatly, so much so that when the Free State Goldfields were proclaimed in the late 1940’s, shafts were now circular and lined in concrete and the Headgears were either made of steel or reinforced concrete.

The trend through the decades leading to the Millennium was to increase shaft diameters and to increase the output of ore from the shaft by providing larger capacity (and faster running) skips. This in turn led to the increase in the size of Headgears; in height, breadth and width.

In the same period exploitation of platinum group metals along the Merensky Reef, near Rustenburg and copper deposits on the Zambian Copper Belt (that also carried on through to the Congo), meant that Headgears were appearing across the whole of  the Southern African plateau (Highveld); both in steel and reinforced concrete.

The 21st century has introduced new mines, which operate dual shaft systems which plunge in the region of 3100 metres below the surface; they are South Deep near Westonaria and Moab Khotsong (Vaal Reefs No. 11 Shaft) on the south bank of the Vaal River, near Orkney.  The Headgears for these mines were designed and constructed in reinforced concrete and were built in the 1990’s, to be used in the sinking and equipping phases of the project (South Deep from 1995 to 2004 and Moab Khotsong from 1991 to 2000). It is worthwhile noting that the Vent Shaft Headgear at South Deep has been modified to incorporate a steel framework around and over it, which at 87 metres high, has become the highest steel headgear.

The record for the height of a reinforced concrete headgear is held by Impala No. 16 Shaft at 132 metres high. 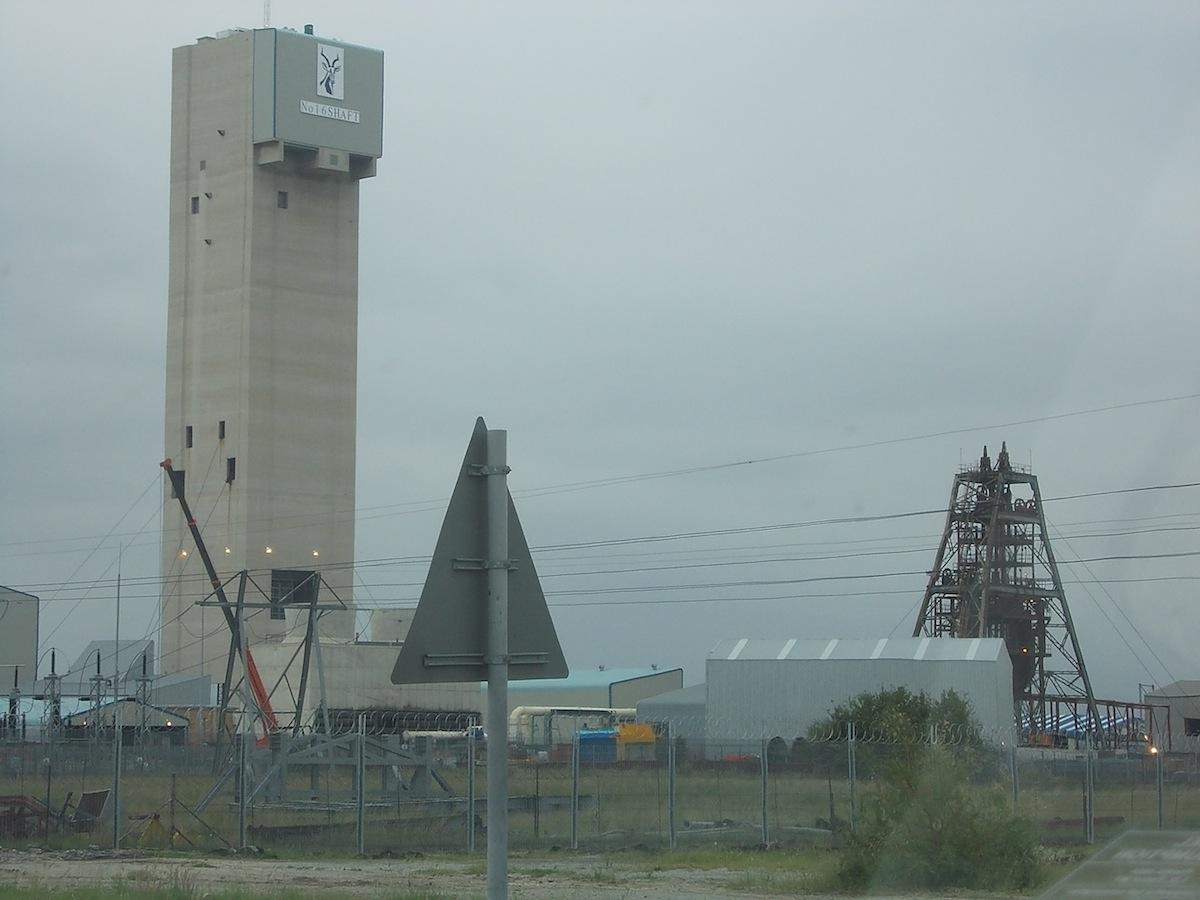 Impala No. 16 Shaft (The Heritage Portal)

Purpose of a Headgear

A concise definition of a Headgear, is a steel or concrete structure constructed to facilitate the transfer of men, material and rock from underground as well as the housing of equipment and safety devices used for sinking  and production (from a Glossary provided by “Shaft Sinkers” : www/shaftsinkersgroup.com/glossary.aspx).

In an operational ( i.e. revenue earning) mine shaft the transfer of men and material to and from the underground workings or the raising of blasted rock (reef or waste) from the loading station to the surface is achieved by a mine hoisting system, which comprises the following:

All of the above deserve a chapter of their own, however only the purpose for the Headgear will be elaborated upon.

The primary purpose of a Headgear is to support the sheave wheels, on which the winding ropes run. The ropes are coiled (stored) on ground mounted drum winders, situated in the winder house, at a distance away from the Headgear. The ropes leave the winder house at approximately 40 degrees to the horizontal and go over the sheave wheels, mounted up in the headgear, they then change direction and go downwards into the shaft. At the free ends of the ropes are attached the conveyances (man/material cages or skips). It is worthwhile to note that it is usual to counterbalance the conveyances, i.e. when one is at the bottom of the shaft the other is at the top; this is done in order to reduce the power output required by the electrically driven winders.

No matter what the material of construction of the Headgear is;  whether steel or reinforced concrete, the internal layout of the tower requires the same consideration in regard to operational requirements of  loading men and material at Bank Level (i.e. at the surface of the shaft) and the discharging of rock into the storage bins alongside the Headgear. Skips, which are the vessels which convey the rock to the surface, are usually much longer than their breadth and width dimensions; in order that they take up as little space as possible in the shaft. It follows on that to increase skip capacity (payload) the skip has to be made longer. This is the main reason why Headgears have become taller over the years. On the shallower shafts of 100 years ago, a 2 ton capacity skip was the norm, however today 20 tons and more are common.

Choice of Material of Construction

Steel v Reinforced Concrete – both have their merits & disadvantages. Traditionally steel was favoured when ground mounted drum winders were specified, however in recent years concrete has gained favour.  Speed of erection is often the “trump card” as nowadays the Headgear is also required during the sinking phase; the faster the Headgear goes up the sooner the sinking of the shaft begins. Steel is fabricated off-site and transported “piece small” to site, there to be assembled on the ground in larger units, i.e. a sheave deck, and then lifted into position by crane. Concrete however is cast insitu using the Slip Form method.

The appearance of a Headgear in steel is totally different to that of one made in concrete, as to which is more pleasing to the eye; beauty is in the eye of the beholder.

South African expertise remains at the forefront of deep level mining with the prospect of our design codes for structures in the mining industry (SANS 10208 Parts 1-4 incl.) being  advocated as an ISO standard (ISO 19426) for worldwide use.

As for Headgears in Southern Africa on mines that have closed down. Those made of concrete generally remain, as demolition costs are high, only the internal steelwork is stripped out for scrap. An example of a concrete headgear which had stood derelict for over 50 years after closure of its shaft and is now re-equipped and re-opened is the Konkola North Shaft Headgear (formerly Bancroft No .2 – closed down circa 1957) in Zambia.

Steel Headgears fair worse as they are much easier to demolish and have a scrap value.

The Cornish tin mines had many steel Headgears which had lain idle for several years (after closure) and were eventually torn down in the drive for scrap metal during the Second World War. This could well be a portent of things to come on the Highveld as our mines become worked out and are closed down.