A flag for the Con Court, with help from an elephant 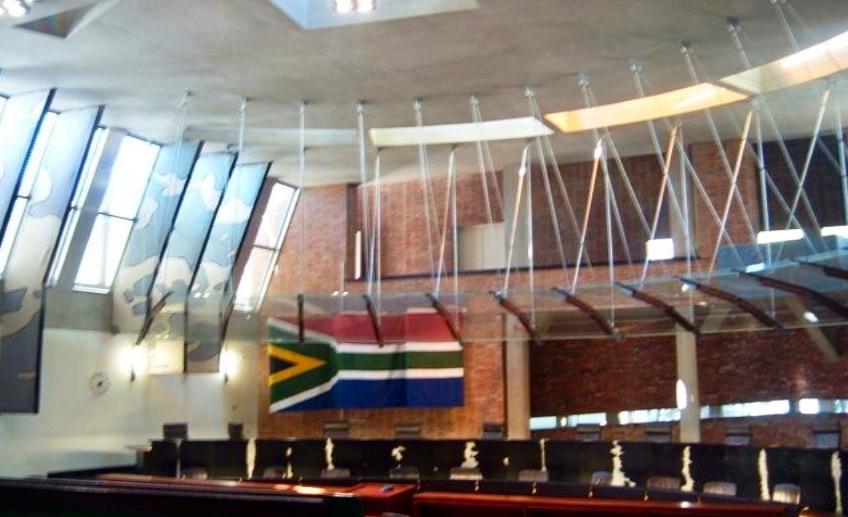 In the article below, journalist Lucille Davie tells the story of the creation of the Constitutional Court's iconic South African flag. The piece first appeared on the City of Joburg's website on 8 September 2006. Click here to view more of Davie's work.

The Constitutional Court has a new artwork – a beautifully beaded and embroidered South African flag, positioned above the judges’ seats in the courtroom.

Measuring six metres by 2.5 metres, the hand-stitched flag with its bright colours, hangs in a wave shape, a striking counterpoint to the muted, earthy tones in the courtroom. Its fine detail of neatly stitched beads, sequins and embroidery attests to hours of meticulous work.

Completed in March this year by a group of six KwaZulu-Natal women, led by Leonie Malherbe, it took around five months to finish and is described by her as a task equivalent to “swallowing an elephant”.

The flag had been commissioned last year by the artworks committee of the Constitutional Court, consisting of judges Albie Sachs, Yvonne Mokgoro and Johann van der Westhuizen. The art collection of the court consists of 200 works, collected since 1994 when the court came into being. 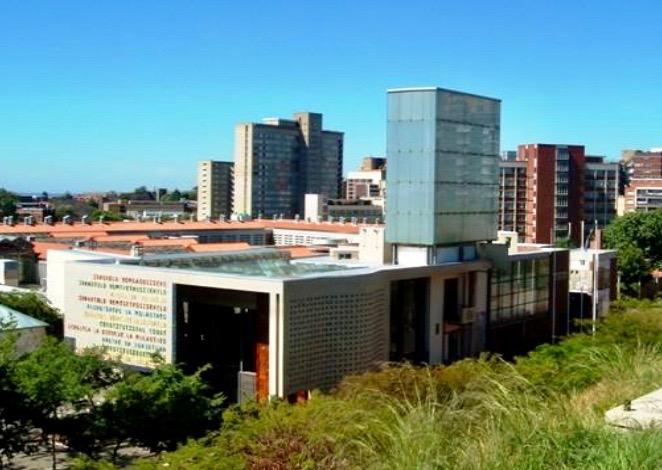 Constitutional Court from above (The Heritage Portal)

Malherbe approached the project with some trepidation, daunted by the enormity of the task. With fellow seamstress Hlengiwe Dube, they spent a whole day cutting and taping strips of brown paper as an experiment to see how the real thing was to be done. It was exhausting work.

”At the end of the day I stood up and looked at this pattern which filled the main gallery of The African Art Centre [in Durban] – I took fright at the enormity of it and felt a panic approaching – how was this to be tackled? How do you swallow an elephant, I asked myself?” said Malherbe. “Some deep breaths, prayers and positive thoughts gave me the answer – of course – cut it up into bit-sized pieces.”

The two women were so stiff from pattern cutting the next day, they could hardly walk. The stiffness lasted three days.

She decided to give each seamstress – Agnes Mbatha, Sphindile Nkosi, Greta Nkosi, Zibuyisile Zulu, Dube - half metre lengths to work with, using one colour at a time. That meant buying cottons and beads in the same colour. It was the only way to digest the elephant, she says.

But don’t think it was going to be a case of just walking into a shop and buying the necessary materials. “I explained to the bead shop about the project and said that I had no idea of quantities to buy – they were very co-operative, as were all the other shops I dealt with, by agreeing that if I bought too much of one colour – I could swap the beads for the next colour as the job progressed,” she explains. 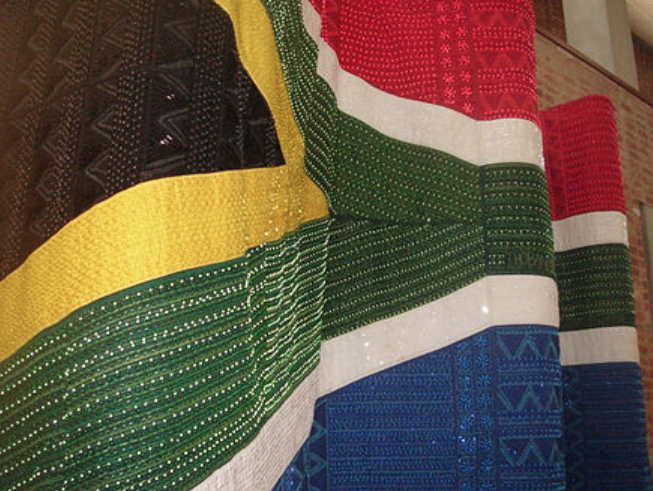 A close-up of the flag (Lucille Davie)

Their first flag-making workshop was held on 18 November last year, in the main gallery of The African Art Centre.

”I explained to the group the importance, honour, seriousness and enormity of the project and showed them a picture of the wall in the court where the flag will hang – over the judges’ heads. I also showed them other artists’ work displayed in the court.”

The first colour chosen was red. Malherbe had brought along red beads and red thread, needles, scissors, pencils and fabric panels. Straight running stitch and blanket stitch were to be used, in six strands of thread.

Malherbe had got the materials ready – cutting the panels and stabilising fabric, ironing them into 10cm pleats, pinning along the folds, then machine stitching along the lines, and finally, preparing the templates for accurate stitching and beading.

One of the seamstresses, Greta Nkosi, “a competent and imaginative embroiderer”, became so overwhelmed by the vastness and importance of the task, that she forgot how to do the simple running stitch. Eventually Malherbe marked dots on to her fabric, and demonstrated with the needle going into one dot and out the other. After several anxious tries Nkosi got going on her own.

After a lunch stop Malherbe explained how important it was to stitch the beads on securely – stitching “each bead three times and finishing the threads off at the back”.

After the workshop the seamstresses took the work home to return again in a week, on 25 November, with their completed panels. This time different bead designs were chosen as “we wanted alternating patterns to form one strip of colour to emphasise pattern and texture and also the reflective light from the transparent beads”.

Dube was appointed quality controller, a job she took very seriously – she often worked past midnight so that during the workshops she could get the women to fix and change any areas that were not perfect.

Meanwhile, Malherbe had bought the blue fabric and beads, and these were handed out by Dube, who by now knew how many beads were required for each panel.

Malherbe found that to keep up with the pace, she had to get up at 5am most days. “The flag project seemed to be getting bigger and taking longer than I imagined it would – it felt all consuming.”

More workshops were held, and eventually on 9 December architect Janina Masojada (of OMM Design Workshop in Durban, a partner in the design of the court) was called in to check progress. It was nerve-wracking.

“I stood, hidden, outside the gallery peeping at her as she walked in – I waited for a genuine reaction – she stood silent, looking down at the panels and my heart sank – she then looked up with tear-filled eyes and proclaimed it rich and wonderful – I hugged her in relief as the responsibility is awesome and please God – let her like the completed job.”

Masojada suggested that the names of the seamstresses appear on the flag. Malherbe wrote the names on the green panel, then stitched them, with the date of completion, 2006.

In the meantime, an unlikely convert had joined the group. Mbatha’s grandson, Tholani, who had been helping her stitch at home, was given the green light and allowed to join the group. But then, Malherbe spotted, with horror, that there were wax drippings on his green panel. The explanation was simple – he had worked at night by candlelight. “These marks distressed me a lot, but we managed to remove them and beaded over other areas,” says Malherbe with relief.

The work settled into a pattern. “We had a routine now – check work, critique and correct, continue work, lunch, hand out materials, collect completed work, payment and set date for next workshop.”

By January 6, 2006 the red, blue and green panels were complete, and one person had dropped out, while Mbatha and her grandson were paid and not re-hired. The team was down to four: Malherbe, Dube, Nkosi and Zulu. Only the white, yellow and white strips were left.

A week later it was time to get a sense of the finished product.

”We laid the whole flag out to pin the panels together – this job was exhausting – the fabric pulled and stretched and we had to constantly measure widths which kept changing – barefoot we had to walk carefully on the beading because of the size of the panels – kneeling on the beads was torture, so we used cushions and these had to be moved each time we move[d] a few centimetres – pinning was difficult as pins bent because of the weight of the fabric. Everything had to be tacked which was murder on the fingers.”

The next day Masojada and fellow architect Andrew Makin came to discuss how the flag was to be hung. It was decided to use 20cm sleeves, top and bottom, with PVC strips inserted into them, which would then be screwed onto a metal beam on the wall.

Malherbe went to an awning and tent company who stitched together the panels and the backing.

It took two days to cut, pin and stitch the backing fabric to the flag, and Malherbe had expert advice from the tent company.

”Anthony Joseph and Brenda David the machinist were very patient and helpful with a job none of us had ever done before – we felt our way together – Anthony with his years of experience, had lots of practical tips and suggestions and Brenda convinced me to relax, as he knew what he was doing.”

Malherbe was advised to stitch the flag carefully to the backing, a job that was impossible to do with a machine. So she sat down to sew the backing to the flag, row by row, 10cm apart. It took nine days to do, eight hours a day.

On Wednesday, 15 March, the flag was finally finished. “Hemming all round and stitching the sleeves, took all day – I was so tired at night I could not eat – but – finally – the flag was FINISHED!”

The flag was hung shortly after it was finished. It joins the court’s wonderfully varied art collection.

The elephant had been successfully swallowed.