When did Johannesburg first appear on a map? 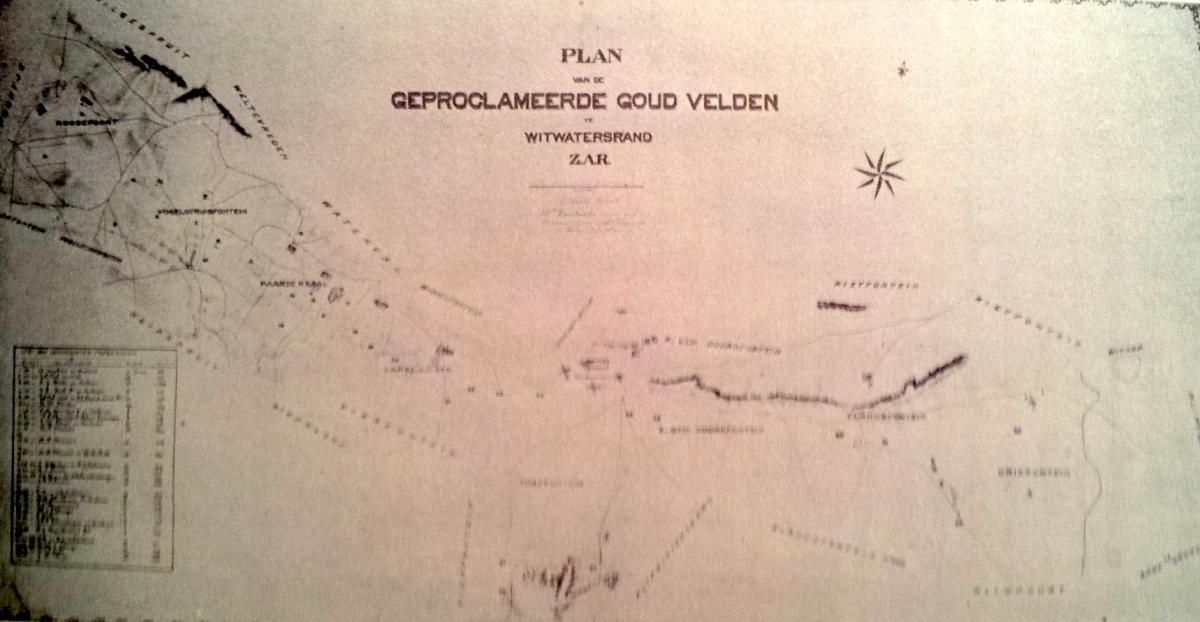 In the article below, Oscar Norwich answers the fascinating question 'When did Johannesburg first appear on a map?''. Norwich was a prolific collector of maps and his priceless collection is now held by Stanford University (click here for a description). He was also the long time Chairman of the old Johannesburg Historical Foundation. The article first appeared in the 1984 edition of the Foundation's journal Between the Chains.

For many years the writer of this article has been asking both in South Africa and in overseas cartographical circles, when did the name of Johannesburg first appear on a map. After some years of research, a surveyor’s plan illustrated here was found housed in the Africana (Strange) Library of the Johannesburg Public Library. A surveyor’s plan is definitely acceptable as a map. Its author was Johann Rissik, of the Surveyor-General’s office, and it is dated 15 December 1886, approximately three months after the official Government Gazette proclaiming the opening of the Witwatersrand gold-fields.

First Map of Johannesburg - zoom - Between the Chains 1984.jpg 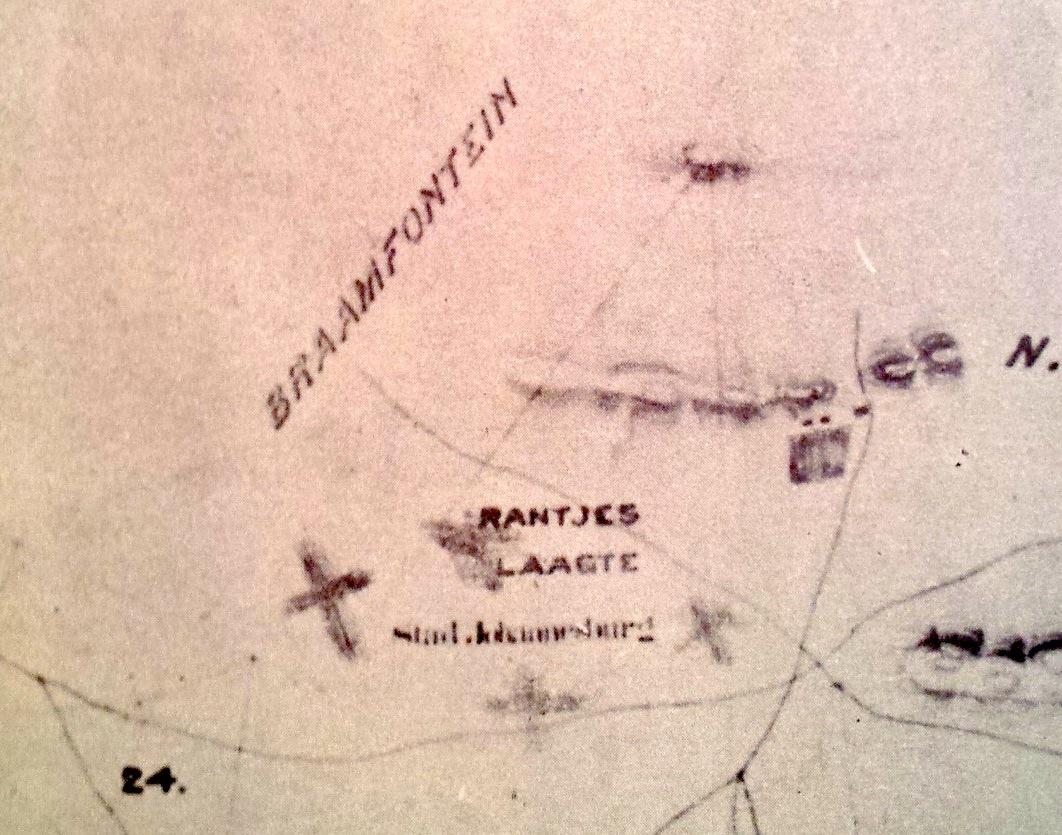 The city of Johannesburg is vital in the history of South Africa as the centre of the largest and wealthiest gold fields yet known to mankind, discovered there in 1886. The Government then in power in the Zuid-Afrikaansche-Republiek (Z.A.R.), took steps, on receiving the official news of the discovery of gold, to introduce a certain degree of law and order in anticipation of a wild gold-rush. President Kruger sent the Acting Surveyor-General, J.F.B. Rissik and C.J. Jobert, Minister of Mines, on 4 August 1886, to the area concerned – the Witwatersrand (Ridge of White Waters) – to investigate and report back.

In their report they suggested that a triangular portion of Government-owned land situated between the surrounding farms would be a suitable site to establish a settlement for the increasing population concerned with gold-mining activity. They named the area Randjeslaagte. The Executive Committee of the Z.A.R. considered and accepted this report on 12 August 1886, and on 18 August, a few days later, an official notice appeared in the Government Gazette, informing the public that certain surrounding farms were to be proclaimed for public diggings. In the Government Gazette of 15 September 1886, appeared the signed proclamation by President Kruger, recording the dates when certain areas would be made open for public diggings. It was from this small triangular portion of land – Randjeslaagte – that Johannesburg grew into today’s metropolis. 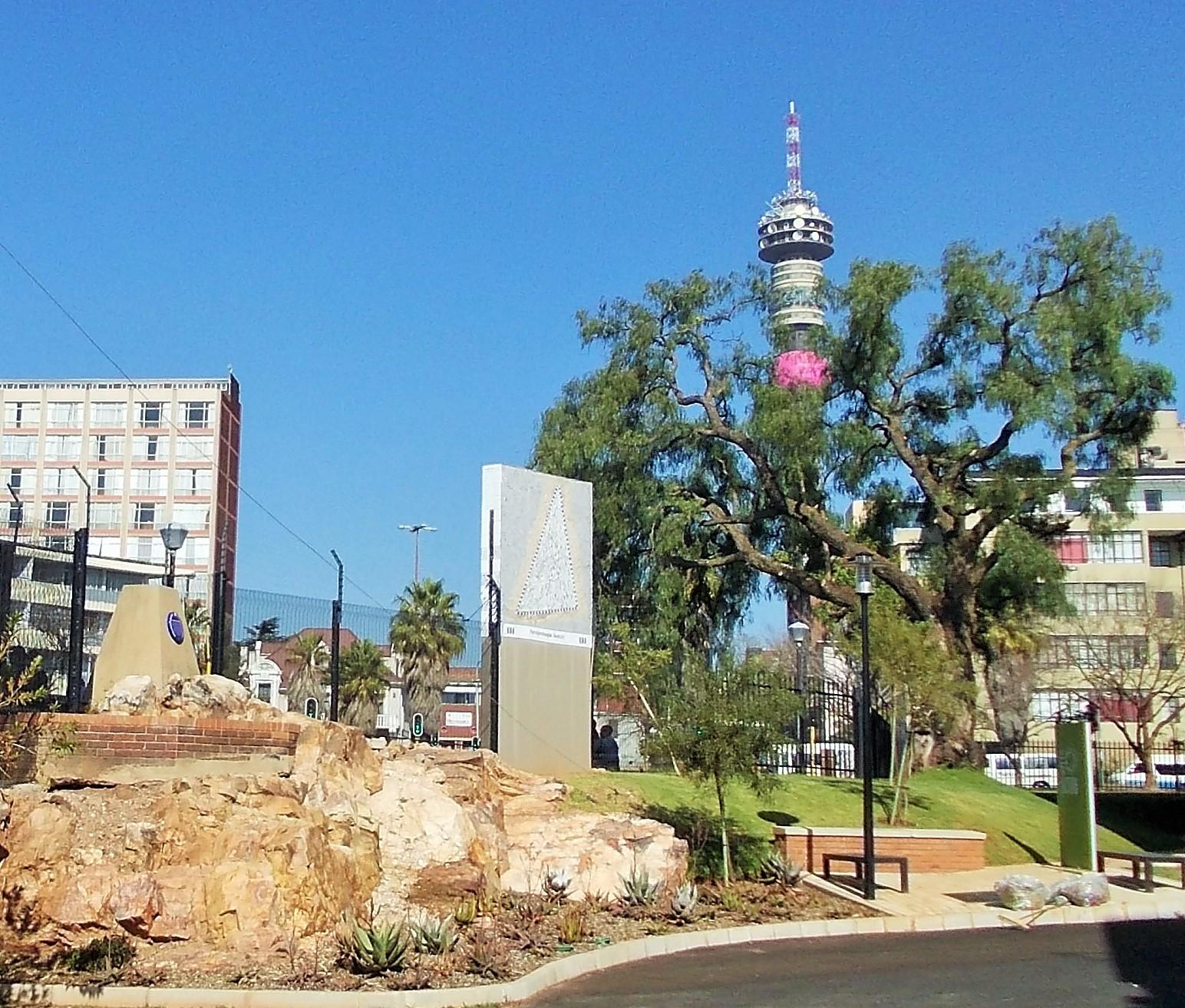 The title of the plan refers to the already proclaimed gold fields of the Witwatersrand of the South African Republic. In the centre Johannesburg is so named, probably for the first time in print, surrounded by the farms of Braamfontein to the north-west, Doornfontein to the east, Turffontein to the south and the farm of Randjeslaagte close by, also in the north. A compass rose is illustrated with the usual north-pointing fleur-de-lys.

It is interesting to note that the name Johannesburg was, after many years of speculation and research, finally decided upon by the Johannesburg City Council on 25 November 1975, to have been based on the name Johann - the first name of both these important figures – Johann Rissik and Johannes Joubert. This decision was celebrated on 1 October 1976 at the Civic Centre, when a sculptured bust of each of these personalities was unveiled in the presence of many municipal, provincial and governmental notables. The presence at this function of the living descendants of these two men formed a sentimental link. These busts at present occupy an important position at the entrance of the Johannesburg Council Chamber.