Peeling back the layers of Orange Grove 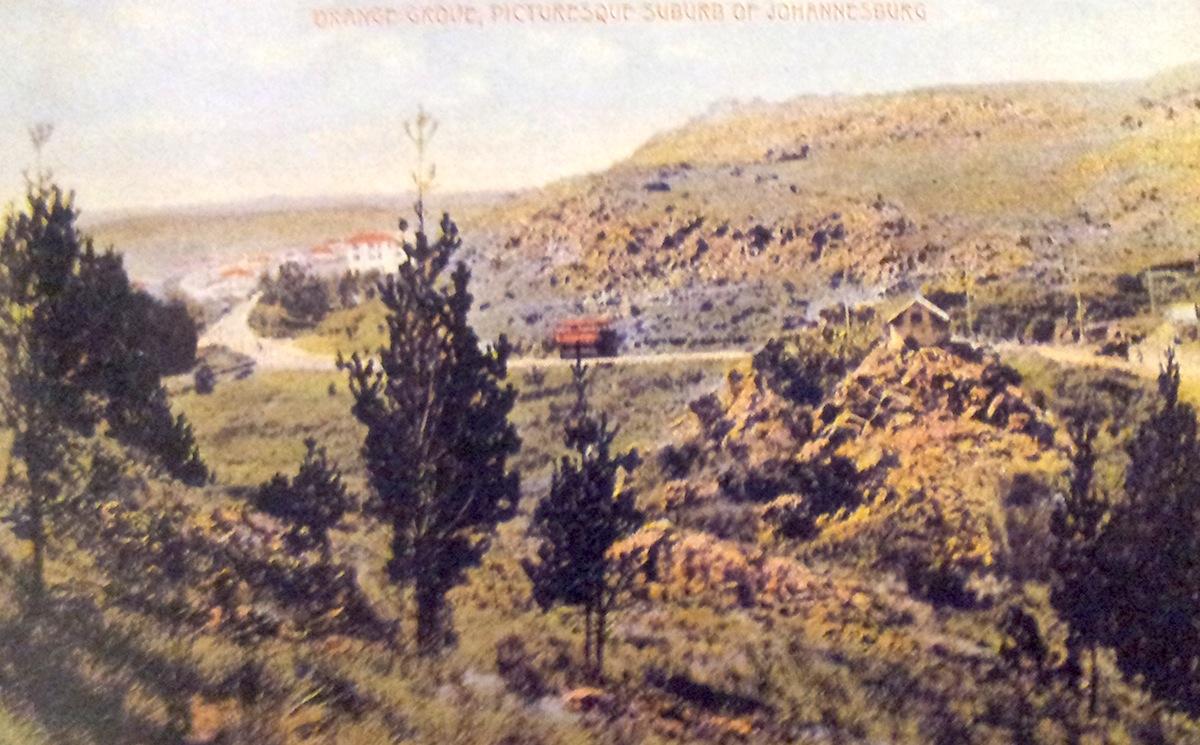 Travel back in time to 1886. Gold has just been discovered on the Witwatersrand, and the koppies and veld between Pretoria and Heidelberg, home to a handful of boer families, their tenants and workers, are starting to attract the attention of the world. The dusty track connecting the Viljoen homestead, nestled below the ridge among abundant orchards, to Pretoria has been extended south and west to the city of tents which has mushroomed on the uitvalgrond between the farms Doornforntein, Langlaagte and Braamfontein.

The Viljoen farm is beautiful. Orange, fig, peach and apple trees were planted by JC Esterhuysen in the mid-19th century, and the abundance of these on the otherwise treeless veld has led to the farm being called Lemoen Plaas. The farm is also blessed with water: a fountain just below the farm house is a source of the Sand Spruit, which forms the western border of the property.

The situation of the farm house, at the foot of the ridge that needs to be climbed before reaching the diggings beyond, means that the Viljoens are frequently visited by weary travellers, including President Paul Kruger who rests here before continuing his journey into Johannesburg to mark the first anniversary of the gold fields. No doubt Viljoen sees an opportunity in this nuisance, because his home is soon converted into the Wayside Hotel. Other amenities are soon added: tea gardens, swimming baths and a collection of wild animals to amuse visitors. In 1893 air balloon ascents are provided by a Professor Price, with varying degrees of success.

The transformation of bucolic Lemoen Plaas to bustling Orange Grove is complete when an advertisement in The Diggers News of September 1889 appears extolling (in language estate agents use to this day!) the beauty and charm of plots for sale in the suburb. Strangely the suburb changes names several times, from Alexandra to Alexandria Estate to Cellieria, before Orange Grove is finally settled on in 1904. Street names prove equally unstable: picturesque Hope, Target, Viljoen, Louw, Roux, Natal, Kolbe, Bodega, Emma and others are soon replaced with more prosaic numbered streets and avenues.

But not even this corner of paradise, far removed from the diggings as it is, is spared the effects of the war that breaks out in 1899. Lord Roberts and Lord Kitchener capture Johannesburg as the highveld winter begins to bite, on the 1st of June 1900, and then use it as a base to capture Pretoria four days later. They fortify the route between the cities with blockhouses, tall stone and iron lookouts, building one not far from the Orange Grove hotel.

The end of the war in 1902 brings a frenzy of activity to Johannesburg, and what remains of the Viljoen estate is quickly divided into townships. In March 1902 freehold plots are advertised in Orchards, followed by Norwood in June and in The Gardens in July.