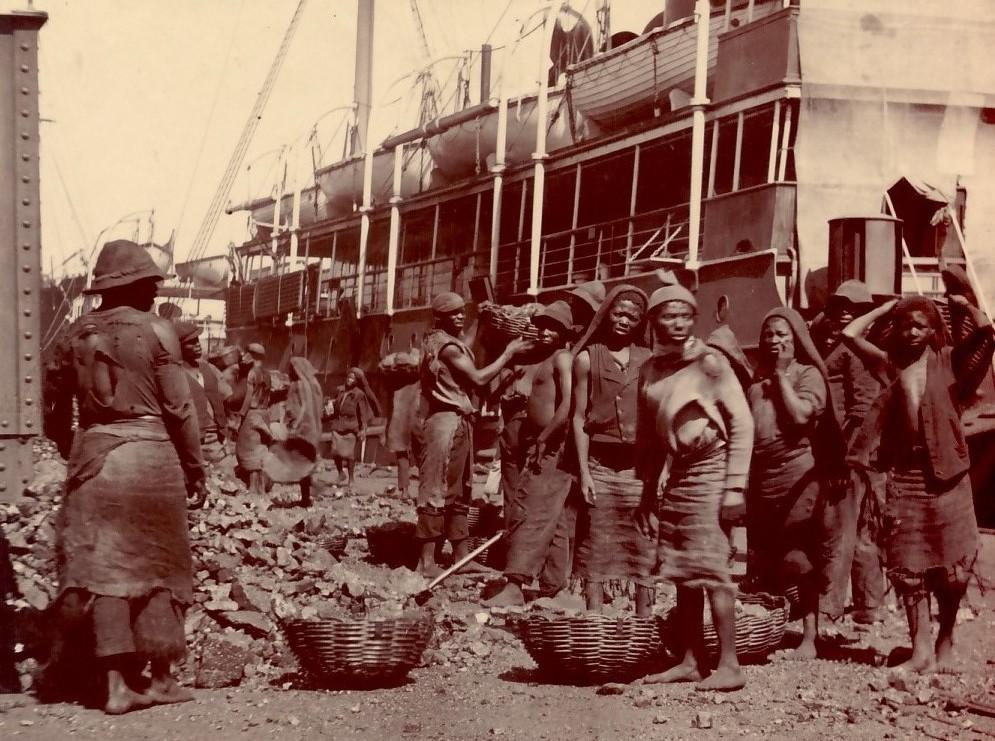 In 1899 at the outbreak of the Anglo Boer war, Johannesburg was the centre of the gold mining industry and Dundee the centre of the coal mining industry, while Durban was one of the major ports of entry into South Africa for British troops and supplies – and their ships needed coal, as did the railway industry that moved the troops and supplies throughout the country. 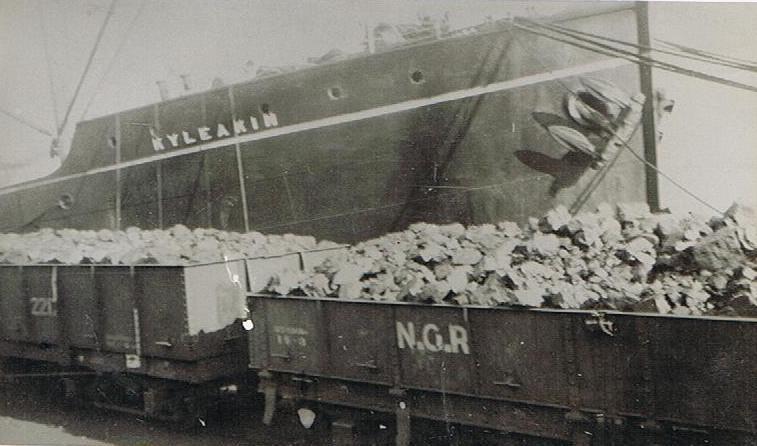 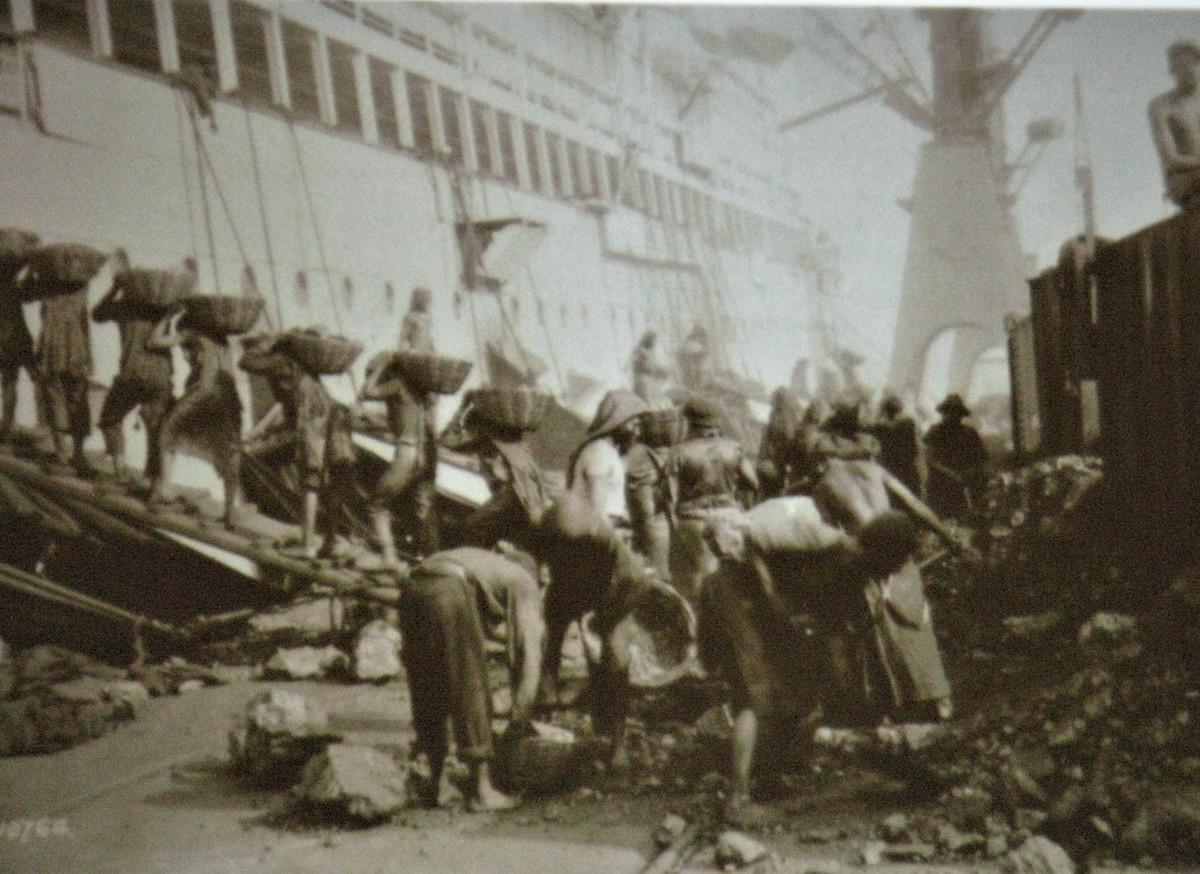 Loading coal onto a ship in Durban (Talana Museum)

Coaling a transport at the Point Durban - Talana Museum.jpg 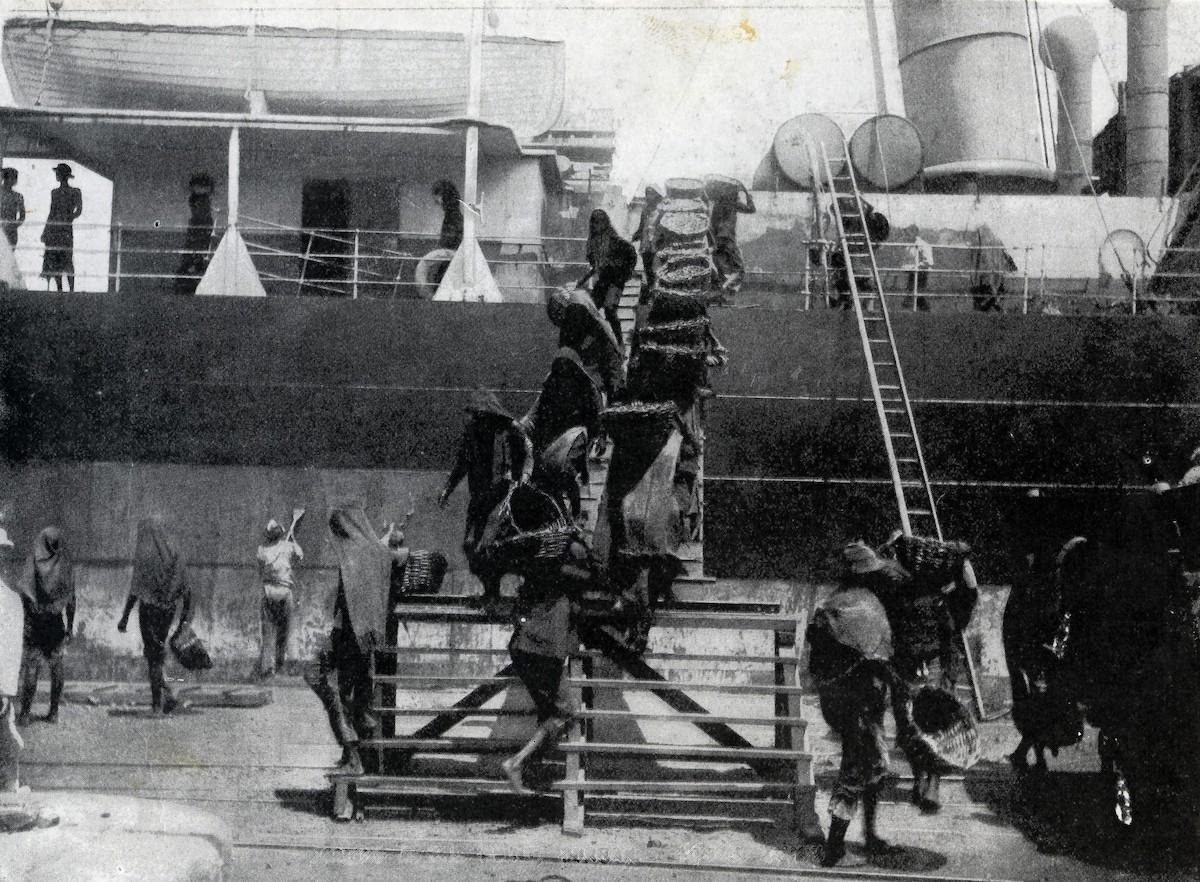 Coaling a transport at the Point, Durban (Talana Museum)

There were four ports of entry for British ships bringing troops and supplies to South Africa. Cape Town, Port Elizabeth, East London and Durban. Very early in the war Cape Town harbour was closed for some time as ships had brought infected rats to the city and there was an outbreak of bubonic plague. Port Elizabeth could not handle large ships and supplies had to be off loaded into small ships (lighters) in the “roads” and then brought into the harbour for off loading. This continued with passenger ships until the 1950’s. East London was a river port and also had a problem with large ships. Thus by default Durban became one of the important points of entry into the country and for the export of coal from the Natal hinterland.

The first organised coal mining in South Africa was begun by the Dundee Coal Company (registered on the London Stock Exchange in 1889) whose base of operations was Dundee with mines on the slopes of Talana hill, throughout the Endumeni and Glencoe valley’s. The remains of coal mines that created a rich and vibrant economy in the area still leave their mark on the hillsides and valleys today.

Dundee became the heart of the coal producing area – nicknamed Coalopolis (the coal metropolis) and the town expanded rapidly. Today Talana Museum is the national coal mining museum with 4 extensive exhibits depicting the many aspects of coal mining in northern KwaZulu-Natal and preserving the proud and unique heritage of this industry. The museum is the national archival depot for coal mining material relating to KwaZulu-Natal and holds thousands of photographs, maps and records of 92 of the 126 coal mines which at some point operated, or still do operate, in our region.

The coal mining industry was a critical element in supplying a vital resource for the war. At the start of the war there were a considerable number of coal mines operating in the Dundee and northern KwaZulu-Natal region. The establishment of many of these mines had been established by the navigation companies as they required coal to power the turbines of their ships. 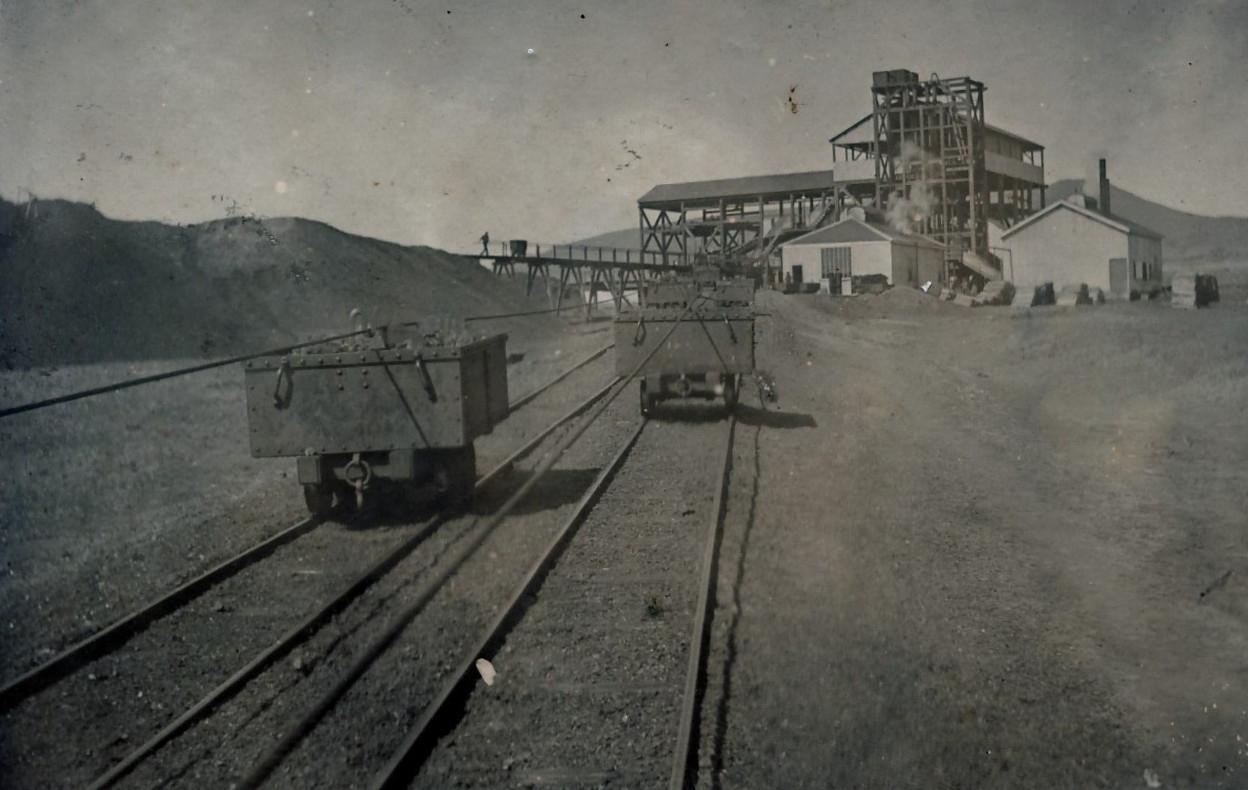 The decision to defend Dundee, at the outbreak of the war, was a political rather than a military decision. Surrounded by hills, Dundee is not strategically a suitable town to defend, but pressure had been put on the Natal government and hence the military authorities, by the coal mine owners to defend the town. Dundee had also become a depot for an enormous amount of military stores.

Not only did the mines supply the necessary coal for the ships and the railways, but they were used as underground storage depots. Food, ammunition, and other supplies were stored down the mines. British paymasters also used the mines to store soldiers pay – only small quantities were transported to military units at a time. There are still stories in the area of paymaster’s funds that got left in old mines.

The coal mines operated until shortly before the battle of Talana on 20 October 1899, which proved inconclusive and the British and colonial troops withdrew from the town. Dundee was occupied by the Boer forces for 7 months, until the British and colonial forces fought their way back in May 1900. In those months the coal mines were closed. No coal was mined. Dundee was relieved on 15 May 1900 and within 10 days the mines in the immediate vicinity of Dundee were operating again. 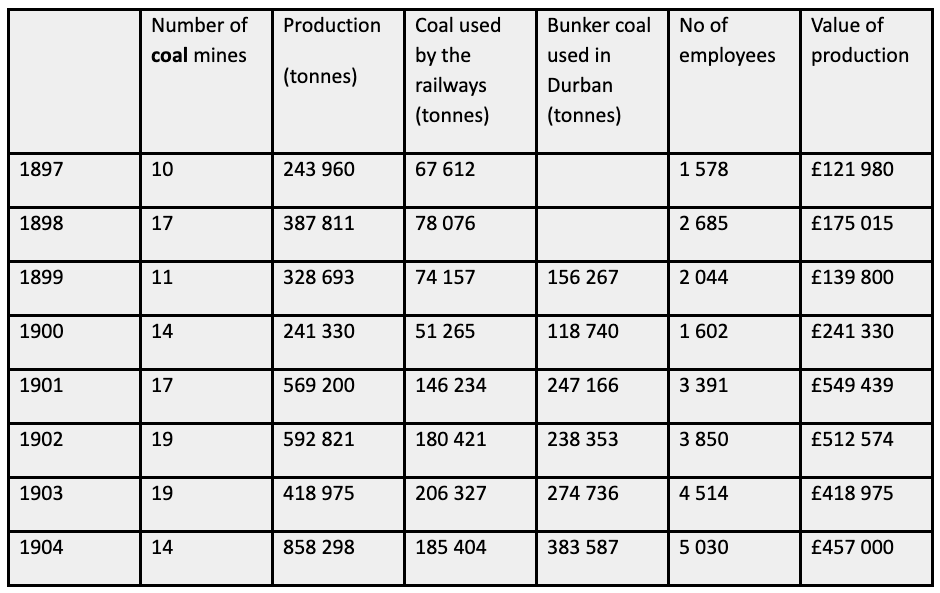 In his report for 1900 the Commissioner of Mines mentions that:

From the state of some of the mines were found to be in after standing for so long – no work was done in the Dundee district after 19th October 1899 – I expected that there would have been more accidents under the heading “falls of roof”. You will notice there has not been a single accident from explosion of firedamp (methane).

He also comments that:

The war is no doubt responsible for the present demand for coal, and for the prices obtained for coal being double what they were in 1899.

He then continues to list damage to all the mines in the area and also the date on which they were brought back into production, as well as damage to equipment and machinery as well as the severe shortage of labour, which hindered production.

An indication of the number of ships needing coal was a comment by an Australian nurse, Ethel Smith, on her arrival in Cape Town in 1900:

It was glorious, the first glimpse of land, and watching the sun rise over table mountain, a little to the right. The air was as fresh as a cold shower. It was a beautiful sight coming in to the bay. There were 99 troop ships in the bay, three hospital ships and many other ships besides. 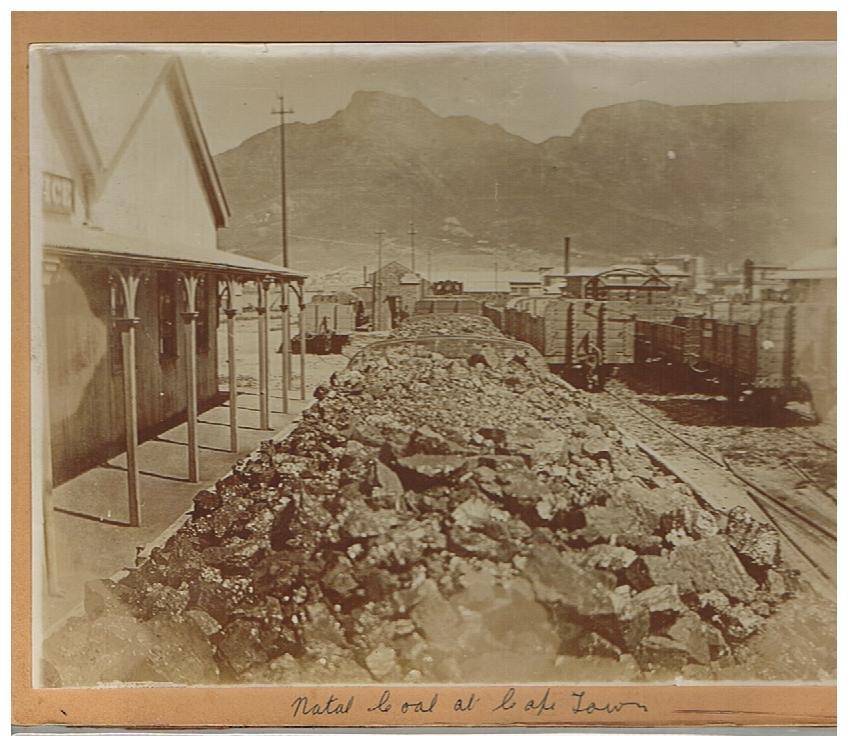 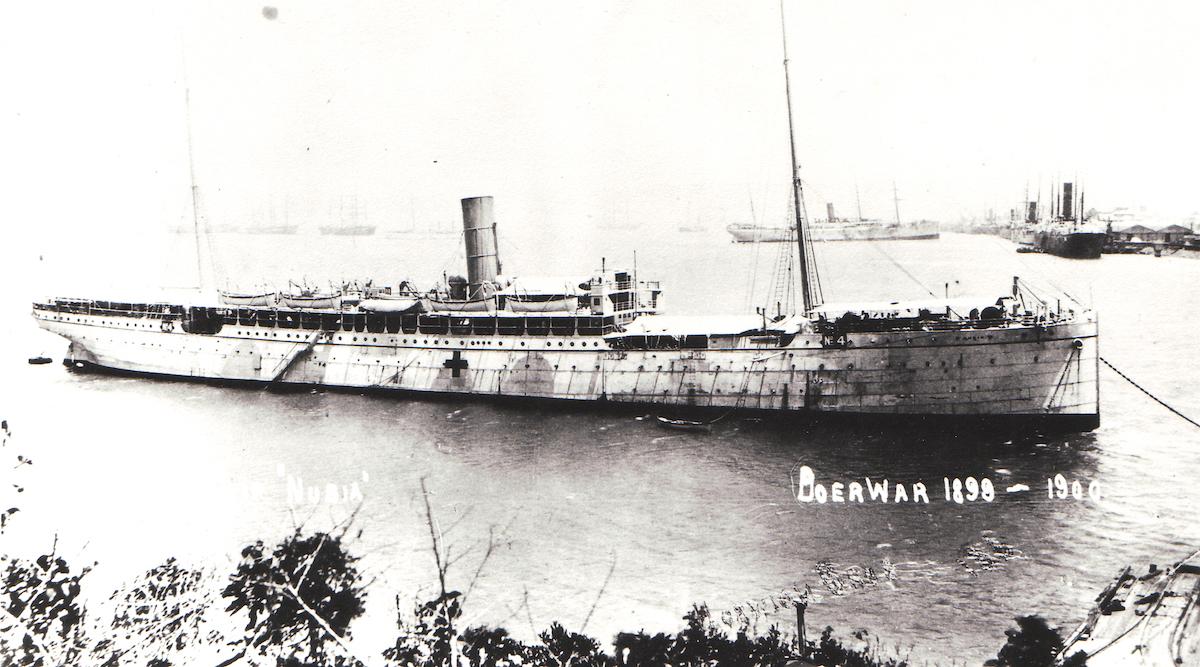 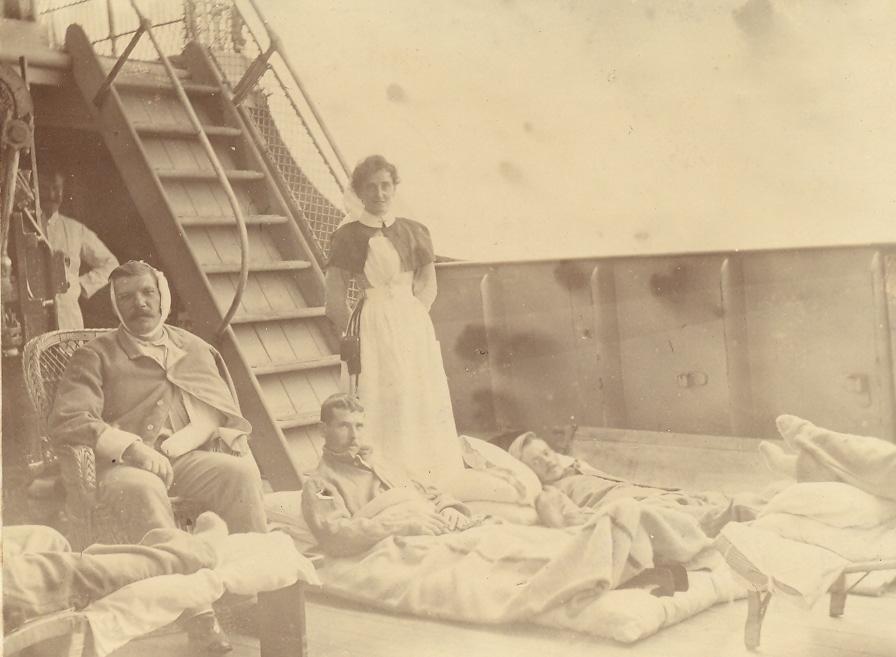 And all those ships needed coal from the Natal coal fields.

The 1901 report from the Commissioner of Mines reports on activity on the mines but again highlights the same problems, particularly the lack of labour. It had become more and more difficult to attract workers to the mines as the military authorities were paying higher wages to attract Africans to the army to serve in numerous labourer capacities.

Would the war have broken out in 1899 had mineral assets not been the major cause for conflict? Had the Transvaal remained a rural country without minerals assets there would possibly have been no need for a war, or it may have happened at a different time with different causes. Britain’s colonial aspirations in Africa may have moved on and ignored the Transvaal. The coal in Natal was in a British colony and there was no need to fight for control of the mine. The discovery of gold and the subsequent wealth and tension that it generated fuelled the war. 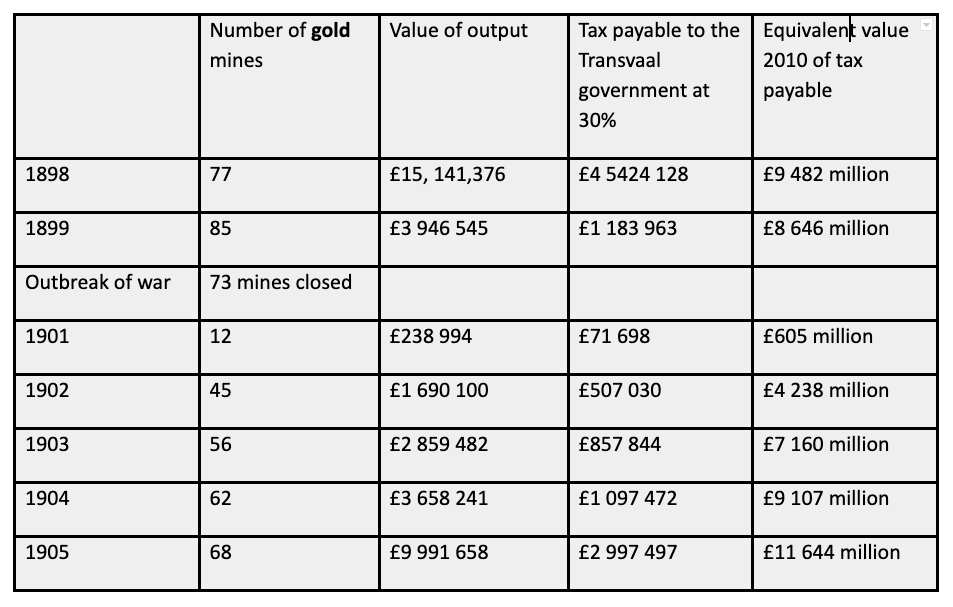 Would the war have lasted as long as it did without the gold mining industry income, to fund the purchase by the Transvaal of sufficient modern weapons to take on the British Empire, arms and ammunition and military supplies? Could the war have continued for as long as it did without the coal mines of Natal to provide the energy source for the ships and the railways that transported troops and supplies?

Pam McFadden has spent many years researching the battlefields of KwaZulu-Natal. She has been interested in them since a young child. As a registered specialist guide on these battlefields for the past 40 years her knowledge about events and the people involved is considerable. Since 1983 as curator, Pam McFadden has developed the Talana Museum in Dundee into one of the finest in the country. As part of the museum collections she has collected and created an extensive museum archive, that holds many treasures.