The Most Important Polish-Founded Monument in South Africa 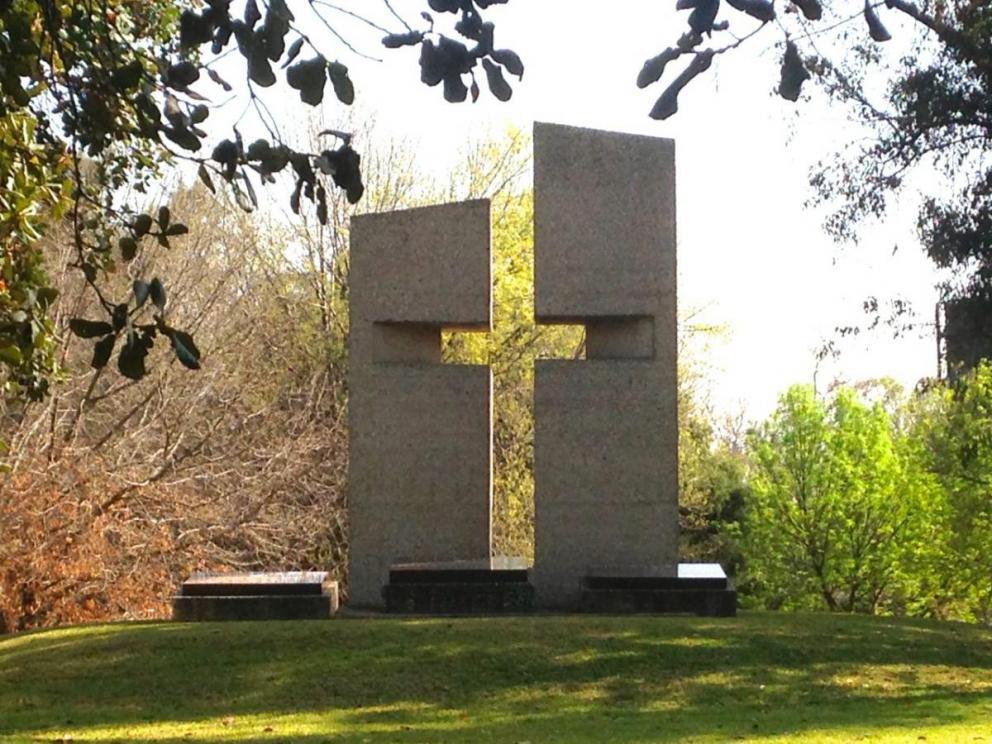 The Katyn Memorial stands on a rise in an attractive park setting, in good view from the nearby Atholl Oaklands Road. The structure is constructed of bushhammered reinforced concrete with a set of three plaques in red granite. The sculpture theme is derived from ancient Slavic forms assembled to create an interplay of open and solid spatial forms creating the image of the non-existing cross. 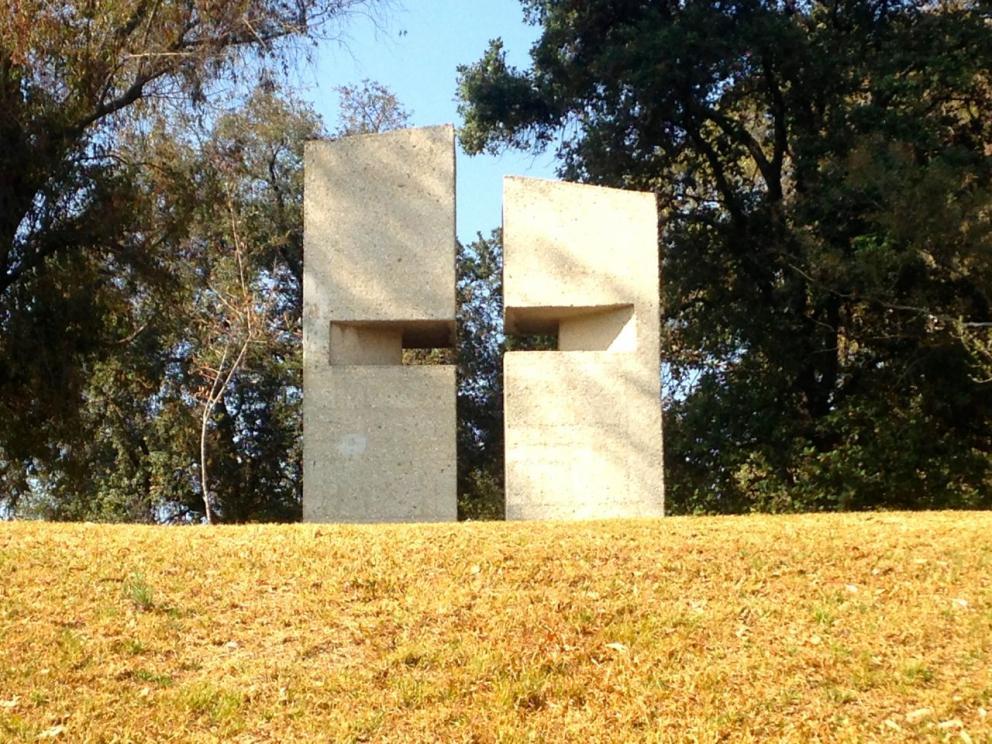 Reverse Angle of the 'Non-Exisiting Cross' 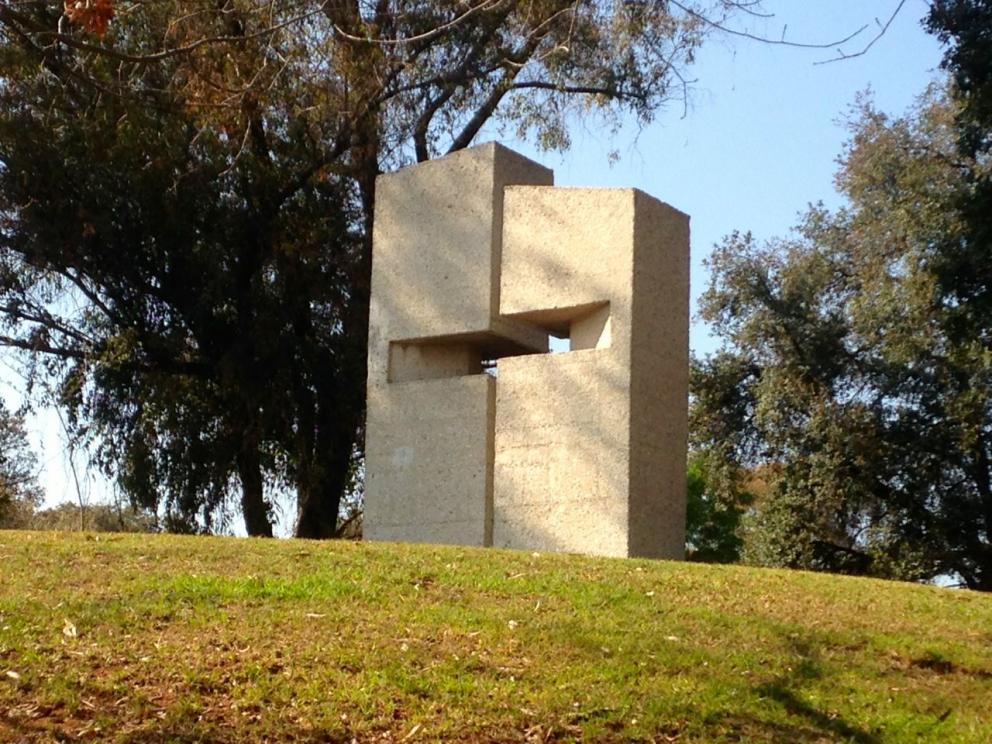 The commemoration of the Katyn Massacre started out as just a plaque in 1973. Known as the Katyn Commemorating Plaque, it found little support from the National Museum of Military History, as its inscription was viewed as fairly controversial. Despite that setback, the newly formed Katyn Memorial Committee approached the Johannesburg City Council to find a suitable place for its placement.

Prof. Stefan Smoleniec was elected Chairman of the Committee overseeing the planning and erection of the monument. Funds were raised and the City Parks Department helped in providing the venue at the James and Ethel Gray Park. The designers were of Polish origin: Andrzej Romanowicz and Adam Snopek (architects) and Leonard Rynkiewicz (structural engineer).  Bishop Szczepan Wesoly consecrated the completed Memorial on 9 May 1981.

Since 1981, following the erection of this monument, the Warsaw Flights Commemoration was transferred from the Cenotaph in the city centre to the Katyn Memorial in Melrose.  The service recalls Allied supply flights to bring relief to Warsaw in which 69 South African pilots [airmen - see comment at the bottom of the piece] lost their lives.  Slow-moving Douglas DC3 transport planes [perhaps Liberators - see comment at the bottom of the piece] had to fly at low altitudes through heavy anti-aircraft fire in order to drop supplies in Warsaw.

In 1989, a decision was made to add two pulpits to the Katyn Memorial, from which the sacrifices of South African Airmen and the Polish Home Army soldiers would be annually commemorated.  The team of Andrzej Romanowicz, architect, and Karol Golda, structural engineer, prepared the design of extensions.  Holes were drilled in the two new pulpits and filled with bullet casings from aeroplane guns containing oil from Warsaw and Katyn.  The Central stand (Katyn) contains soil from Katyn; in the left one (Polish Home Army) soil was placed from the insurgents’ graves in the Powazki Cemetery; and on the right (South African Air Force) soil from the place of the crash of Jack van Eyssen’s Liberator in Michalin near Warsaw.  The municipal authorities conducted the excavations in order to level out the ground in front of the monument.  The additional pulpits were blessed by the then Msgr Jan Jaworski on  8 September 1990.

The memorial is the first to be erected in the world to commemorate the Katyn Massacre.  This is also the most important Polish-founded monument in South Africa.  It contributes to a sense of our multi-cultural heritage and embodies the bonds between South African and Polish communities. 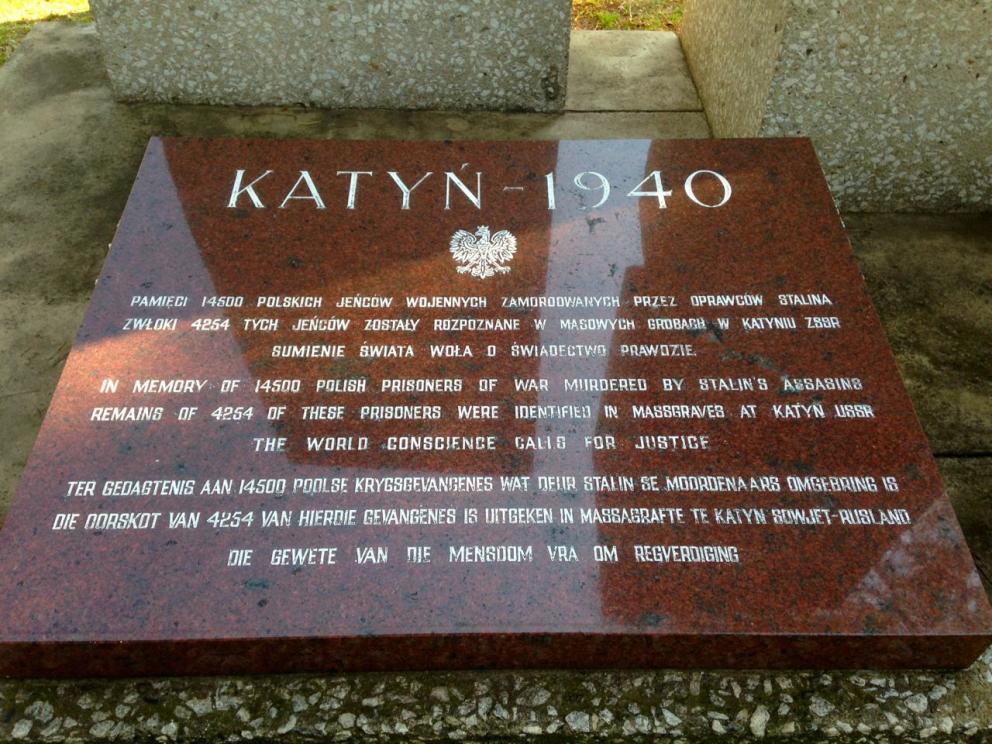 Katyn 1940 – In memory of 14 500 Polish prisoners of war murdered by Stalin’s assassins.  Remains of 4 254 of these prisoners were identified in mass graves at Katyn USSR.  The world conscience calls for justice. 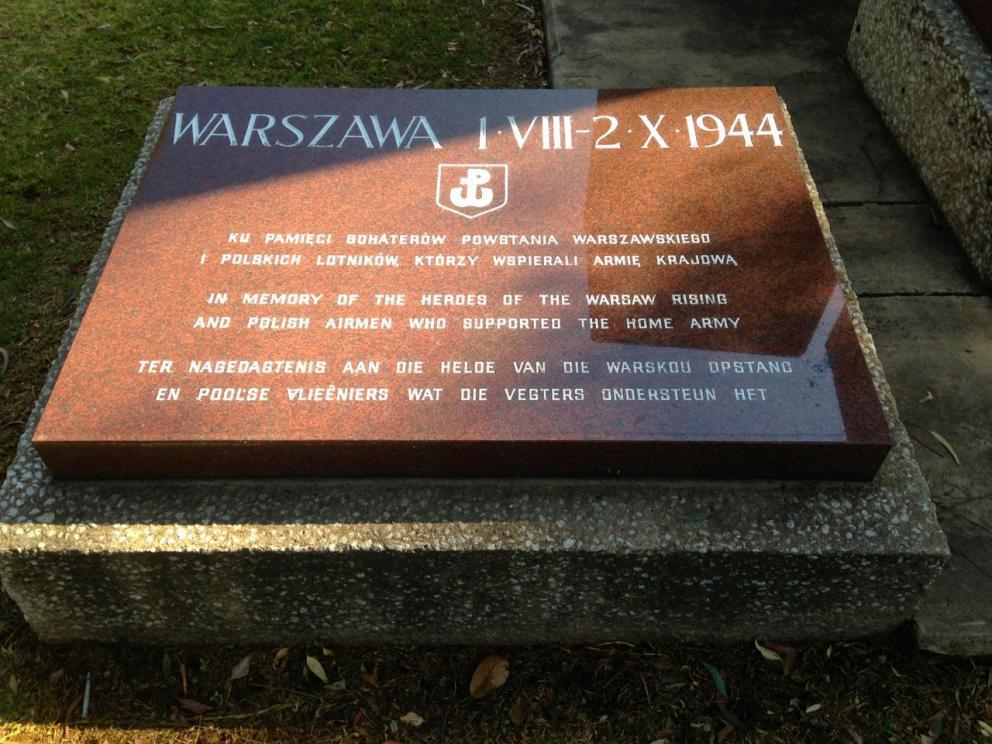 Warsaw 1 August – 2 October 1944 “To the Memory of the Warsaw Uprising Heroes and Polish Pilots who supported the Home Army”.

Important comment from Paul Gabriel Pereira via social media:  "Nice piece, but I think the SAAF flew Liberators to Warsaw, not Dakotas; and their dead were, of course, not all pilots and are more accurately described as "airmen"."