The Story behind Outspan Road Morningside 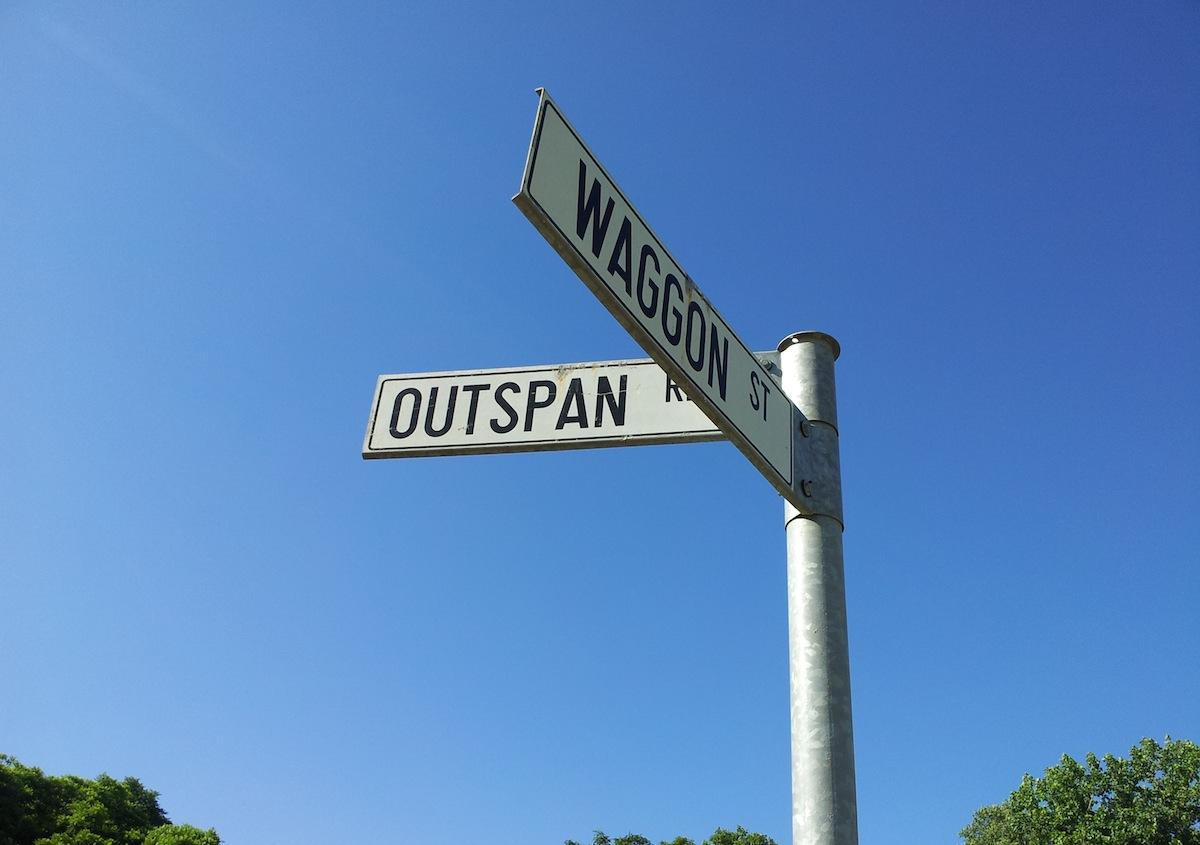 It is hard to imagine that the small park adjacent to Redhill School and opposite the Morningside Shopping Centre in Sandton was once a major 'outspan' where weary travellers (and oxen of course) rested on the way to Johannesburg. The following article, first published in the 1984 Sandton Historical Association journal, brings the story alive.

An old 'outspan', at least 150 years old, has just recently become a new Sandton Park, and will be preserved forever as an open place. This is Outspan Park in Morningside.

When the early farms were laid out in the Transvaal as the Voortrekkers surged northwards in the 1840s and 1850s, and the first Land Grants were made, special attention was given to allowing open spaces between farms, where travellers or visiting families could graze their oxen while resting overnight or for several days to attend the markets. Known as 'outspans' they were, in fact, the first public parks. Many of these public areas remain today, and are of great significance when nearly all those original farms have been divided and sub-divided. One such "Outspan" in Sandton is in Morningside, just near a road which was thoughtfully named Outspan Road. In October of 1983, a special cairn was erected by the municipality near a small spring on the 'Outspan', and this was officially unveiled by the Mayor of Sandton [we could not find this on a site visit].

It has become a tradition that on Spruit Day in October each year (the anniversary of the declaration of the Braamfrontein Spruit as parkland for Johannesburg, Randburg and Sandton) that our Mayor declares a new "river trail". In 1982 it was the Sandspruit, and in 1983 it was this small stream whose spring rises at this old "outspan" in Morningside, and which flows through a pretty, unspoilt dam, westwards down the hill into the Braamfontein Spruit in River Road, Bryanston. The new parkland area to be known as Outspan Park has been attractively planted with trees, and, in dedicating the cairn marking the spot at the corner of West Street and Outspan Road, the Mayor, Councillor Zoe Marchand, pledged the support of the Council for the preservation of Sandton's rivers as conservation areas for the town. The trees were planted at the ceremony. 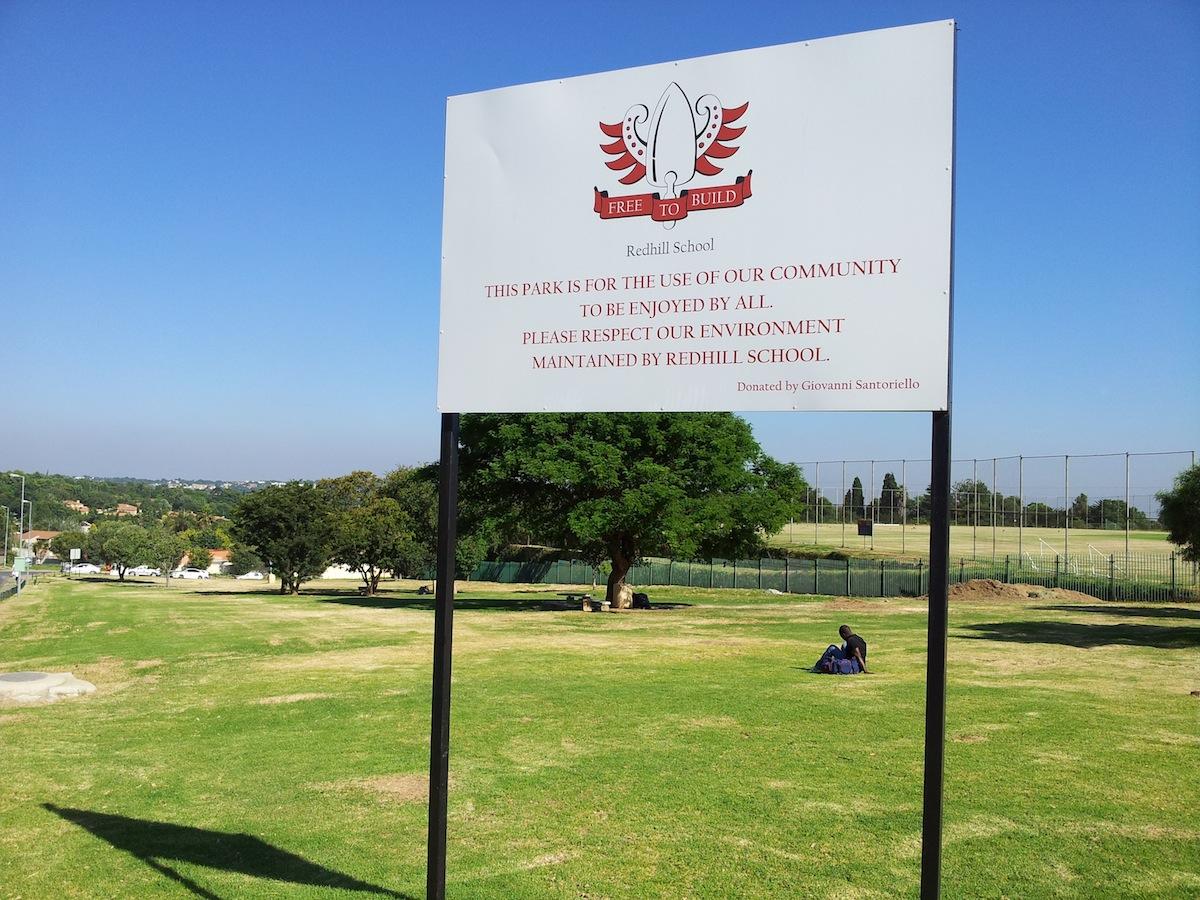 Another piece of parkland has thus been preserved for the citizens of Sandton, and, given the marshy nature of Outspan Park around the spring, the trees should grow well and provide, in the near future, a shady glade for tranquil reflection or relaxation for those who walk the trail and watch the birds.

At the turn of the century, the "outspan" was well used, not only by travellers, but also by farmers who came to bring their produce to the market. From all over the highveld, from Pretoria, Brits, Rustenburg and Warmbaths, farmers came to sell their produce to the goldmines and to the people of Johannesburg. They all "outspanned" at this spot coming in their wagons and bringing their peaches, apricots, oranges and all sorts of vegetables and fruit. While grazing their oxen on the "outspan" (in fact, a much larger area than our present park) they would catch up on another's news and swop stories and reminiscences.

The "outspan" bordered the farm Protea (part of Zandfontein) on the west, owned by Oom Thys Heyneke. Mrs. Juliet Marais Louw, the well-known Sandton historian, spoke about it in the old days with Mrs. Annetjie Viljoen, who was born a Heyneke and a cousin of Oom Thys, in about 1896. Mrs. Viljoen moved with her family from Potchefstroom to Protea farm shortly after the Boer War. She remembered the "outspan", and how, as a child, she had considered the whole world to be one gigantic farm. There were clear views of the highveld in every direction, and the farmhouses were spaced far apart from one another.

Mrs. Viljoen moved to Standerton, so she was not there when Morningside was developed as Agricultural Holdings by S.A. Townships in the early 1930s. Mr. Bill Hedding, now a local Councillor and founder of this Historical Association spent his working life with S.A. Townships, and was involved in the saving of part of the original "outspan" as public parkland when the holdings were originally laid out, the conservation of the spring area being the main concern.

As Sandton has grown, those Agricultural Holdings have given way to small properties and complexes, and our parks have become very precious. The name "Outspan Park" will remind Sandtonians of the old days, 150 years ago, when wagons, oxen and farmers with their produce took their rest at the same spot.