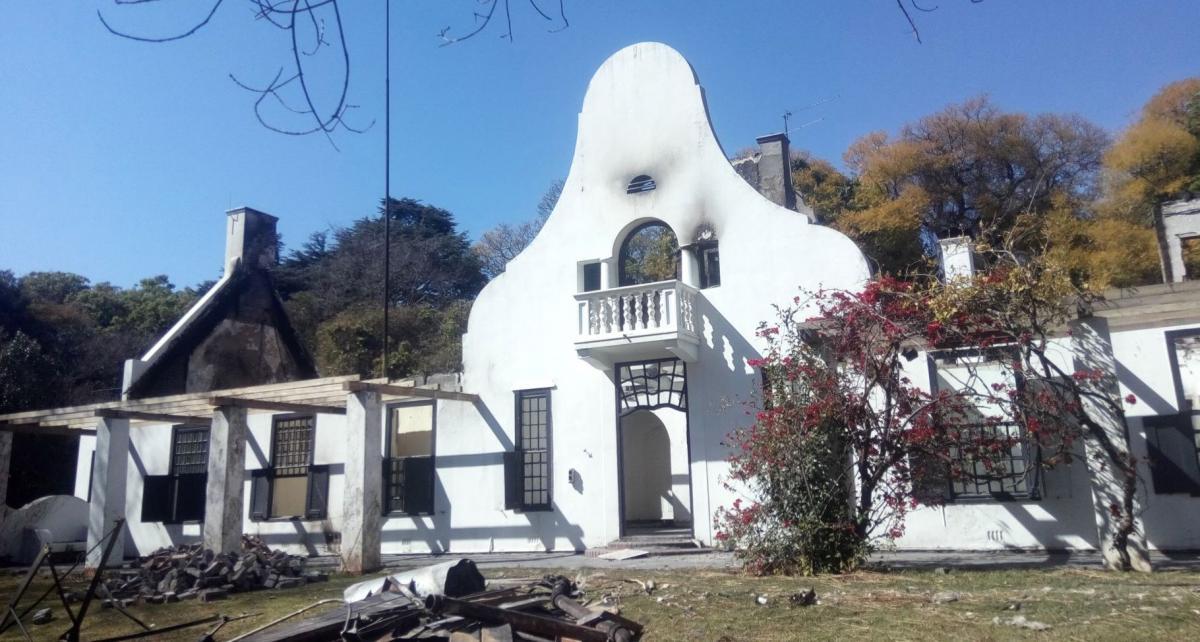 Fire is the most destructive and frightening of all elements. A Johannesburg heritage home in Parktown, Le Tholonet, at 6 3rd Avenue, was lost to fire on 17th July 2018. On Wednesday this week Clive Chipkin and I embarked on an expedition to discover and if possible photograph Parktown and Saxonwold homes of a certain period. We were in search of the Cape Dutch architectural style and its variants in the old elite northern suburbs of Johannesburg.

In the case of Le Tholonet (definitely in Cape Dutch style) we particularly wished to pin down and discuss the glorious central gable of the heritage  home with its first floor lovers balcony, bedrooms at first floor level tucked under thatched eaves and the distinctive chimneys. Imagine our surprise and dismay to discover that the house has been lost to fire. The gates were ajar and it took us a moment or two to realize that all was not right. Only a shell of isolated walls remains. We were confronted by a scene of blackened destruction: burnt remains, blackened walls and collapsed floorboards. The security man on duty (once we had introduced ourselves and presented our credentials) told us that a massive fire had destroyed almost all of this beautiful home. His account was that there had been an electrical fault and with a thatch roof there was little hope of saving the home. On Wednesday, workmen were everywhere removing the debris, the charred remains and fractured black timbers. Twisted metal lay everywhere. Heaps of scrap, burnt out timber, iron, remains of ceiling boards and wooden library shelves piled up on the front lawn.

The home has a listing on the Heritage Register. It is located in a nook of Parktown that is almost unknown. It was one of those hidden gems tucked into the shadow of the great Brenthurst estate of Oppenheimer fame. It was on Third Avenue, a quiet cul-de-sac on the south side of the M 1. Traffic roars like a sea in the distance. Bluegum trees, rooted on the wide kikuyu grass verges outside, tower above. The trees are probably now over 100 years old recalling days when Saxonwold was Sachenwald and a plantation of trees planted for timber for the mines. 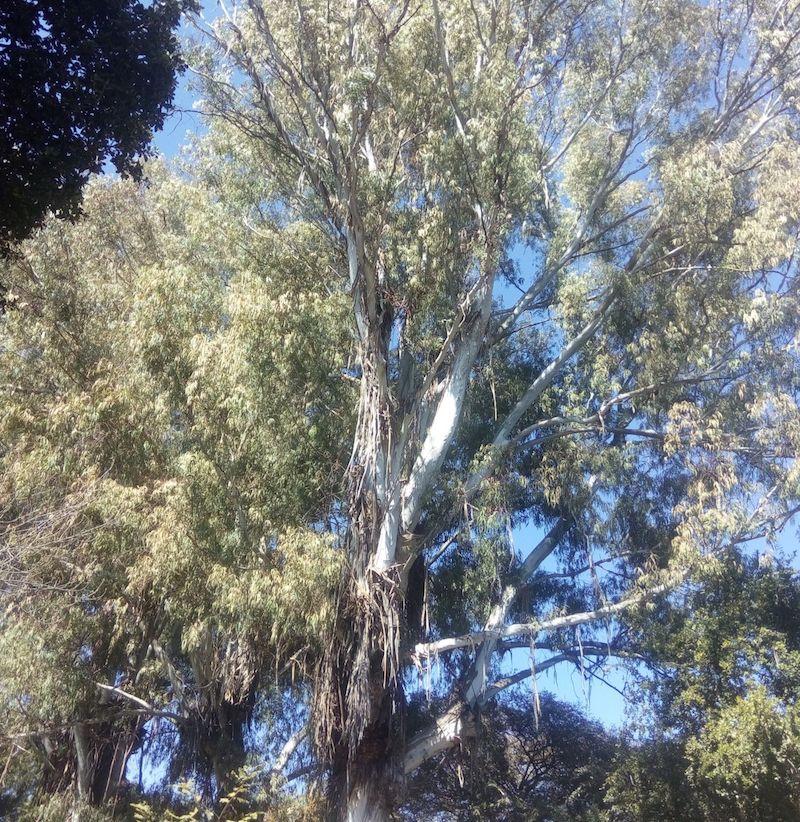 The house stood behind fine high wrought iron sculpted gates with exuberant green creeper looping around the metal... the only positive of a burnt out carcass of a house is that you can look behind the walls and see how the architect designed and supported the gable and the now bleak chimneys still defiant against the blue sky. We visited on a fine day. Spring is approaching and green shoots, tendrils and roots are pushing through the soil. The garden is still impressive even in  July (a dry cold month on the Highveld). 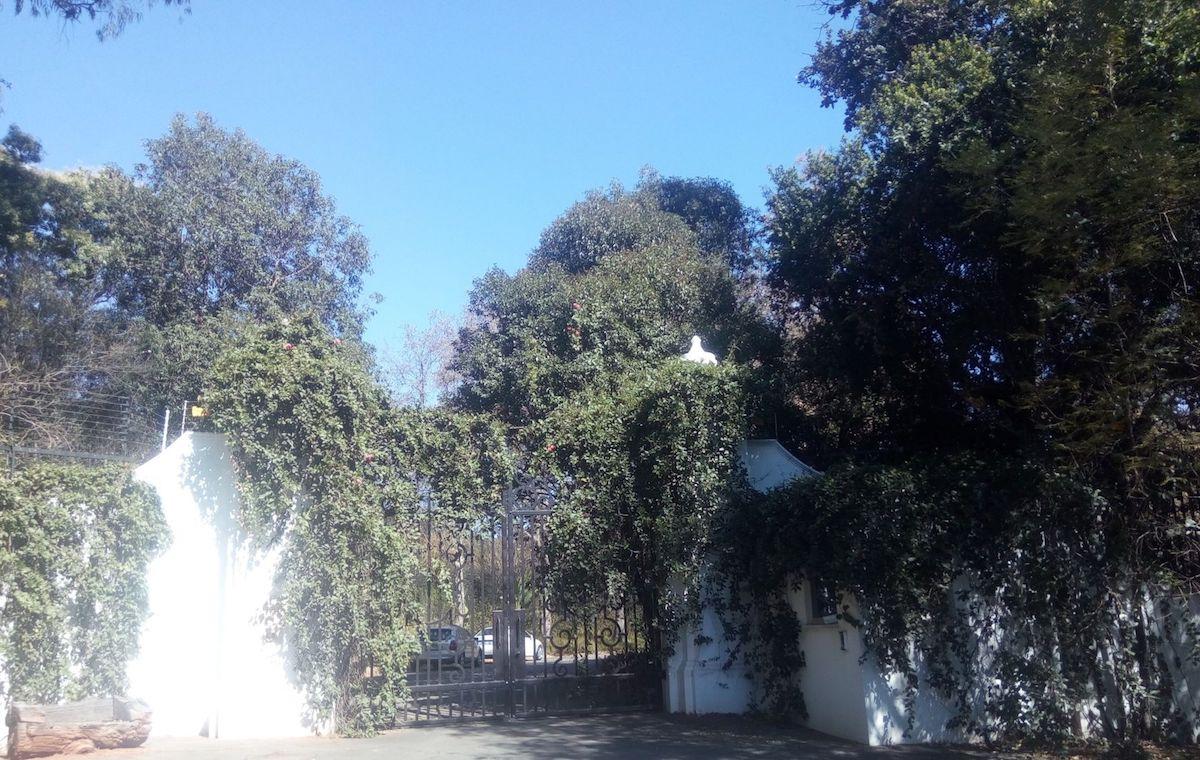 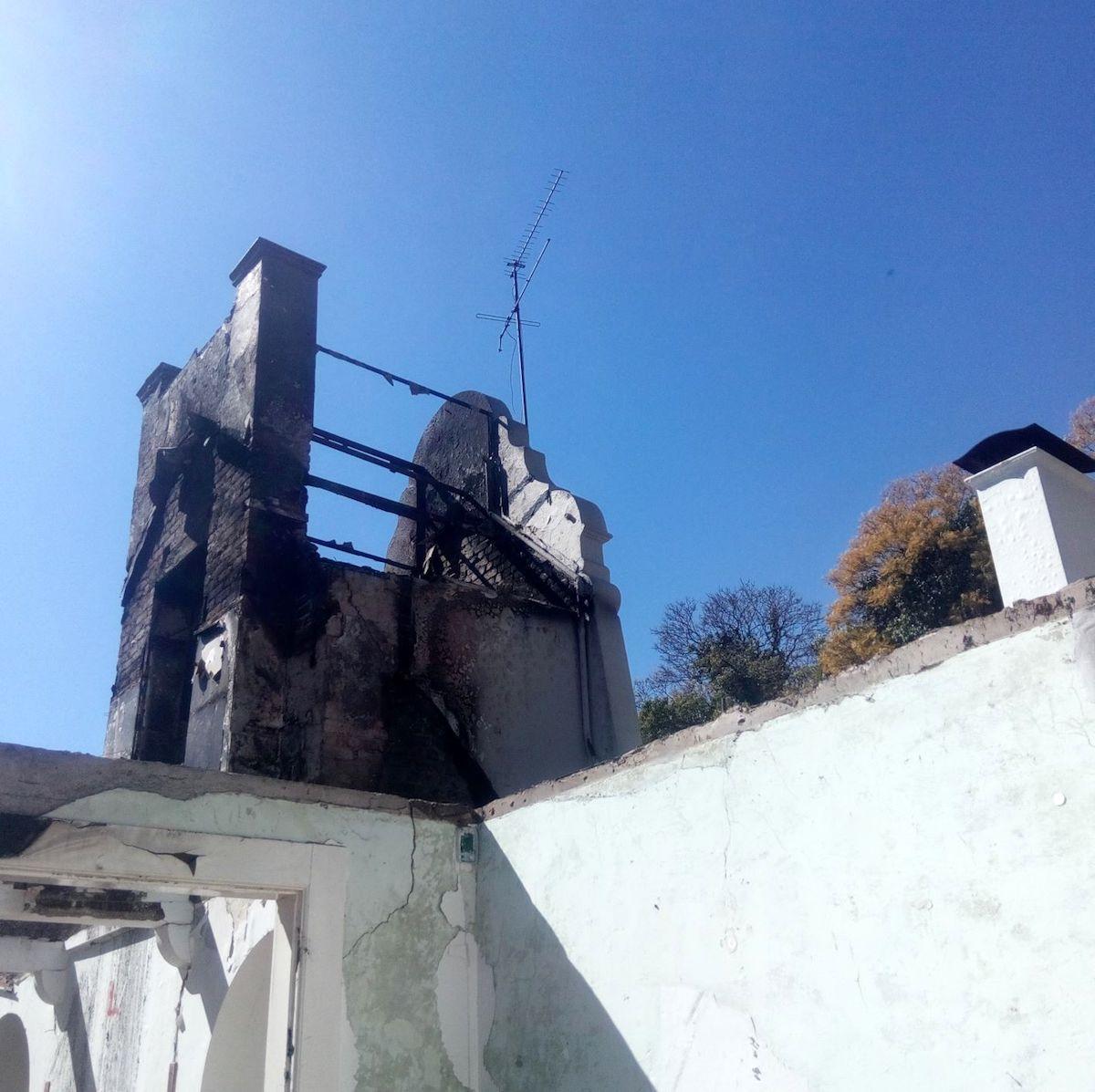 How the architect designed and supported the gable (Kathy Munro)

The architect of this home was Gordon Leith and it was constructed in 1928. It was a property with an 'A' grading from the Johannesburg Heritage Foundation. The original owner was Bertha Coddington. By the 1940s it was owned by Mr and Mrs G Rayner Ellis. It was called Morgenzon and there is a photograph of the house in the Homes of the Golden City, edited by Eric Rosenthal and published in 1948. 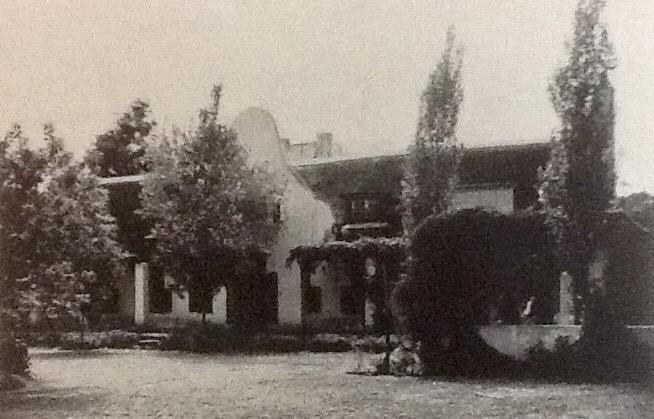 I knew Le Tholonet as the home of Clive and Irene Menell. The Menells were an admirable couple, liberals and philanthropists who were keen to encourage political change in the sixties and seventies. They were active players in the Progressive Party. Clive was an Anglo Vaal director while Irene was a politician who became a member of the Provincial Council. She was the natural successor to Helen Suzman as leader of the Progressive Party. As a young person I liked them because they used their evident wealth to make a difference in many people's lives. I knew Clive because he was the mover and shaker behind the American Field Service and I held an AFS scholarship for a year. It changed my life. The Menells were well connected politically in the USA, with the Democrats naturally, and they were instrumental in bringing Robert and Ethel Kennedy to South Africa on a whirlwind campaign of protest, resistance, speeches and inspiration for young people in 1966. I remember the event as I was out at the then Jan Smuts airport to welcome the Kennedys. It was a time of hope and youth for the sixties generation.

How sad to see a home with so many memories and a home whose walls must have held many political secrets now lost. We walked back to the street where we had parked. It was utterly surreal to then watch a group of men visible through the high gates of Brenthurst, doing Tai Chi on the driveway, all exercising together and moving in slow motion.

Within the last six months the Menell home had been sold and new owners moved in, but I know absolutely nothing about the recent history.