In the wreck of the Haerlem 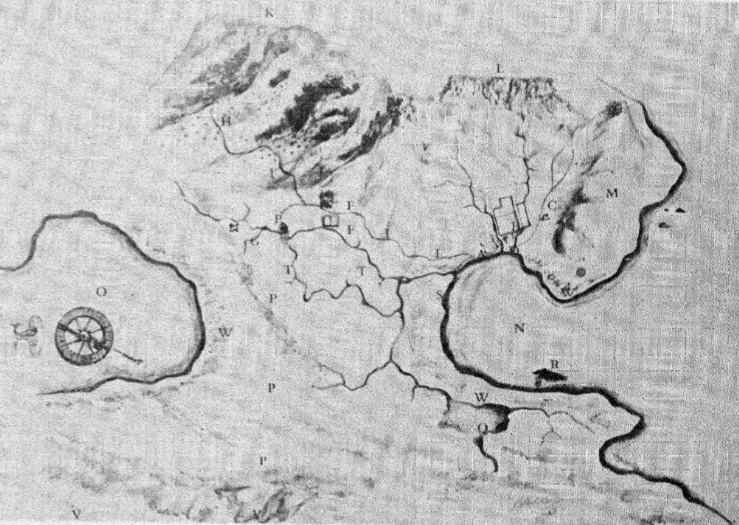 Dr Bruno Werz from the African Institute for Marine and Underwater Research, Exploration and Education (AIMURE) is leading a team to try and find the wreck of the Haerlam (or Haarlam) - click here for details. The wrecking of the Haerlam is recognised by many as the catalyst that led to the establishment of a refreshment station which later developed into the City of Cape Town. In 1975 Mervyn Emms used various archival sources to estimate the location of the wreck. His findings were published in the first edition of Restorica (1975) and are republished below with the kind permission of the University of Pretoria.

On the 25 March 1647 the Dutch ship Haerlem ran aground in the surf at Table Bay. There is considerable vagueness about the exact position of this wreck and writers generally refer to it as being at or near the mouth of the Salt River. In attempting to assess its position let us look at the evidence of its position as stated by various sources. Here we must however bear in mind that the distances given are rough estimates and that a Dutch mile is actually about three English miles and may be as much as four on land.

Tracing of hydrographical chart by Admiralty 1933 shows wreck of Haerlam - via Restorica - 1.png 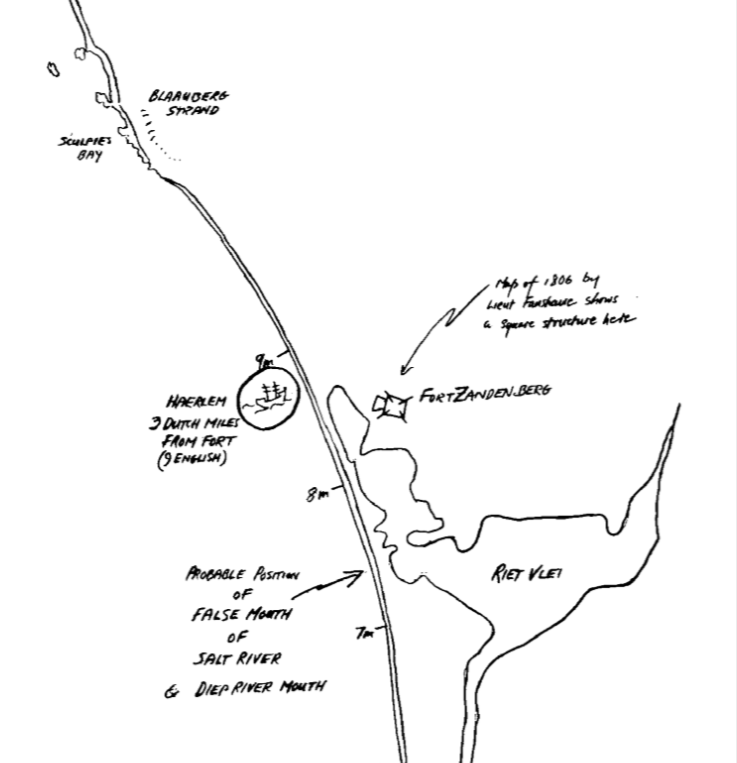 Tracing of hydrographical chart by Admiralty 1933 shows wreck of Haerlam

In the diary of Leendert Janssens for March 26 1647, he states the position as being 1 1/2 miles (4 1/2 Eng. miles) from the roads and records the ship as sitting fast on a sandy shore. We are further told that on March 31 they commenced to throw up a fort on a hill near the ship. Near to this fort they dug a deep fresh water well.

Later a report by Commissioners who visited the fort describes it as being square and built on a high steep sand dune with a gun at each corner. The breastworks which were 8 or 9 feet high were planted with briars and had sharpened canes sticking out horizontally. On the north-west side there was an outwork (Hoornwerk) and a battery of three guns. In a letter from Janssens, one of the survivors, he gives the size of the fort as 450 feet square. Hondius in his description in 1652 locates the wreck as in "Sardaigne Bay" 2 1/2 miles (7 1/2 Eng. miles) from the roads. Major R. RavenHart in his book "Before Van Riebeeck" to which I am indebted for much of the information states that Sardaigne is a curious survival of the old name for a bight (that is a small curved bay). Hondius produced a map which suggests a spot slightly south of Bloubergstrand. A letter from Van Riebeeck dated 25 May 1652 gives the distance as fully 3 miles (9 Eng. miles) from the fort. In April 1648 a letter from Janssens states that the fort which had been appropriately named Zandenburgh (Sand Castle) was some 2 miles (6 Eng. miles) from the Salt River. (Presumably the True Mouth).

That the fort was fairly close to the sea is certain from the fact that a store was erected on the shore to hold pepper salvaged from the wreck and that this was covered by the guns of the fort above.

Relating the foregoing vague clues to a map (The Admiralty Survey Map of 1933 was used) it appears that the position of the fort would have been slightly north of the present Riet Vlei and just before the present parking area. High dunes still exist today at this point and many pieces of porcelain have been found in this vicinity. The record states that 140 barrels of porcelain were landed here, some of which were damaged. I have also examined oak timber cut from buried beams on the beach at this point. The previous items are in the possession of Richard Boberg who has done considerable scratching in the area.

Regarding the Salt River it appears that originally the Liesbeeck and the Black Rivers met at a point where they still do, just to the north of the Royal Observatory. From here the river became the Salt River and flowed into the sea at the true mouth where it still does. This is just beyond the Northern Dock entrance and about 1/2 mile before the Power Station.

The early maps show that the Salt River also flowed into a vlei which surrounded Paarden Island to link up with Riet Vlei. The Diep River flowed down via Vissers Hok and issued to the sea and linked with the Salt River at Riet Vlei, where originally the Salt Pans were located. This was the position known as the "False Mouth" of the Salt River and marked on later maps as "Eerstemond". It would appear that during periods of heavy rains a further point of issue to the sea would open up between Riet Vlei and the "True Mouth". This latter position is where today, with the silting up of the Riet Vlei, the Diep River now exists. Paarden Island still has its isolating vlei on the east side and only a thin strip of land separates this vlei from the sea at the point where the Diep River now issues.

Plan of the Salt River by Lieut Fanshawe 1806 - Restorica.png

Plan of the Salt River by Lieut Fanshawe 1806

In exploring the area I located a site just on the north side of the present Diep River mouth where a depression in the ground formed a small water-filled lake measuring approximately 400 feet in circumference. I was tempted to think that here was a trace of the original fort but this point is only about 5 miles from the position of the original fort and it is at sea level whereas the fort is described as being on a high dune.

The map illustrated (see main image and below) is drawn from the Admiralty Hydrographical Chart of 1913. This map has been compared with a Cape Archives Map drawn up by Lieut. Fanshawe in 1806 and the rivers show surprisingly little positional change. I have shown the location of Fort Zandenburgh to be at the 9 mile (3 Dutch miles) point from the Fort of Van Riebeeck. This is exactly the spot where the 1806 map shows what appears to be a square cattle kraal and/ or farmhouse and the wording "Riet Valley" so it would seem reasonable to conjecture that a later settler seized the opportunity of using the same position possibly because some trace of Fort Zandenburgh still existed at that time.

Early map of Table Bay and rivers - via Restorica.png