The Mills of Potchefstroom 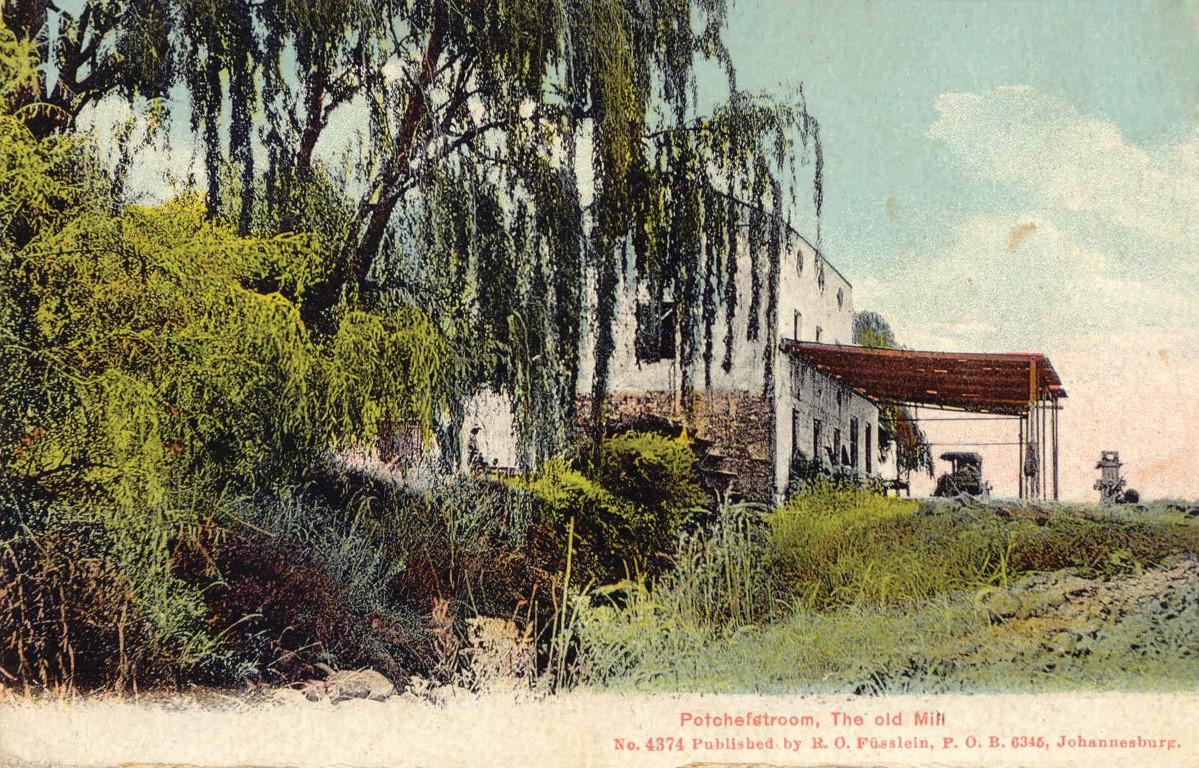 An extensive milling industry was in operation since the very early days of Potchefstroom and between 1847 and 1890 no less than nine mills were strung out next to the Mooi River down from the North Bridge. This area was ideally suited for milling operations due to the slope of the riverbank.

It is not known when the first mill was erected, but in 1855 a certain Henwood had the machinery of a mill transported from Natal to Potchefstroom. It was so heavy that he had to pay an extra £15 to the transporters for damages incurred while transporting the machinery.

The first person who lived in the area where the mills were later erected, was JH Grobler, the magistrate who was responsible for the laying out of the town when it was relocated from Oudedorp to Potchefstroom. His mill stood where the Piet Malan club house on the Fanie du Toit Sports Grounds of the North-West University, Potchefstroom campus is today and it was known as “Oude Molen”. The name is still familiar since the tennis club of the staff of the PU for CHE is known as the Oude Molen Club.

The mill was later known as Hjul’s mill. The building still existed in the 1950s and was raised to build the new club house.

Most of the plots on which the mills were built were fairly small. Subsequently mill owners infringed on the nearby road and this caused problems and court cases.

None of the mills on the southern side of the river were built right next to the river, which meant that furrows had to be dug to bring water to the mills. This also caused long discussion in the meetings of the town council as well as more court cases.

One of the mills was erected at the eastern end of Maree Street. This double story mill was right next to the river and the owner, C Ricketts, also built himself a house near the mill.

Permission to build this mill was granted on condition that Ricketts had to maintain the extension of Maree Street leading to the mill.

The mills were erected mainly to mill cereal, but with the water power available, various secondary functions were also performed. This included the washing of wool, stamping of mealies and sawing of wood. All the mills also had threshing machines.

In 1886 one of the mill owners, Stamp, also had the ability to produce electricity for his household. Both Rickett and Stamp built bridges over the river to make access to their mills easier.

Water is essential to the operation of the mills and the overuse or misuse of the water was often a bone of contention. Farm owners accused the mill owners that they were wasting water.

The lucrative milling business was also fuelled by the demand for grains and cereals in the Kimberley area during the diamond rush. Subsequently the gold rush on the Witwatersrand also placed a huge demand on products from the mills.

Most of the mills stayed in operation until the last decade of the 19th century. The main reason for the demise of the mills was that the growing town put a strain on the amount of water available for the mills.

Even more water was needed after the Anglo-Boer War with the large influx of military personnel and the building of the cantonments. Potchefstroom experienced the biggest boom in its entire existence and there was not enough water to power the mills.

The last mill to go was that of Ricketts at the east end of Maree Street. It stayed in the family until 1874 when he died and Mrs Ricketts married P Peters, after whom the mill was then named. Production ceased in 1890 due to the lack of water. Ironically local legend has it that the mill building was swept away in a flood.

The water mills of Potchefstroom gave an important stimulus to the economy of the town and the growth of the Bult area. Even before the area was divided into burger rights erven and became populated, a general dealer, smithy and carpenter traded near the mills.

The legacy of the water mills today is in street names in the area. This includes Molen Street, which lead to the mills and Meul Street, where a mill was situated. Hoffman Street was named after JH Hoffman (oom Kootjie), one of the mill owners.

Mr Hoffman was the owner of one of the mills that stood right across from the Theological School in Govan Mbeki Drive, about 1875. The scarcity of water prompted him to illegally dig a mill furrow with the help of a plough, a span of oxen and a team of workers. The furrow was 32 m long and led from the main stream to his mill. This action led to three law suits and three fines. The municipality promptly filled up the canal with rocks.

After this the mill was known as the Meriba mill, a name from the Old Testament meaning bitter water. The mill was formally christened as such by Mrs Cato Rocher with the breaking of a bottle of champagne.

When a school was founded in the area, it was named after the mill and known as the Meriba School. This later became the President Pretorius Primary School. 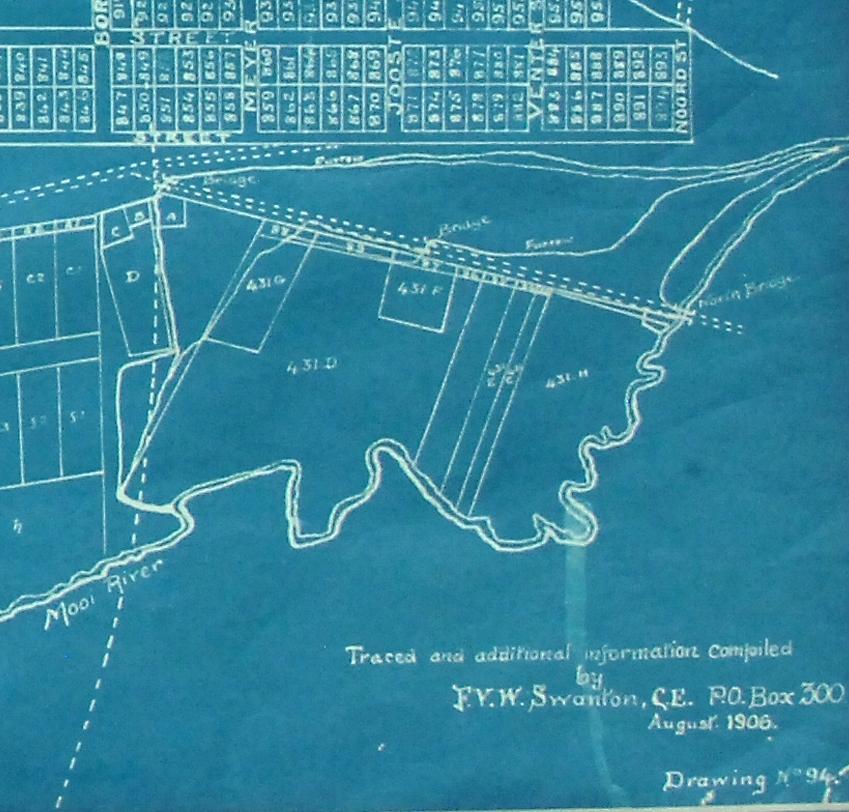 This map of Potchefstroom from 1906 shows the northern end of the town, where the mills were situated. The Mooi River is shown as well as the North Bridge. The lines converging on the top right hand side of the map indicate water furrows that flowed from there. The top furrow turns sharply in an easterly direction shortly before Borcherds Street. Part of this furrow still exists and can be seen between the main grand stand of the Fanie du Toit Sports Grounds and the Sports Village. Three mills were situated where this furrow turned back to the river. The plots on which these mills were built were so small (40 X 45 m) that the owners infringed on the road right next to the mill to make gardens. When the area was formally surveyed, the sharp turn around these plots was kept and this explains the sharp turn in Govan Mbeki Drive, right next to the Theological School. The plots on which these mills were built are visible in the top left hand corner of the map and are marked “C”, “B” and “A”. The area was then known as “Klipbultjie”. (Source: Potchefstroom Museum)

Main Image - This picturesque postcard shows the mill that stood on the spot where the clubhouse of the Fanie du Toit Sports Grounds is today. It was built near where the first mill of Potchefstroom was erected in 1847, hence the name “Oude Molen”. It was bought in 1888 from the then owner, Cameron, by a Dane, Iver Hjul. He sold it between 1910 and 1913 to I Nathenson and B Shapiro. The building still stood when the Potchefstroom University bought the property in 1947 from Shapiro. (Photo: Potchefstroom Museum)