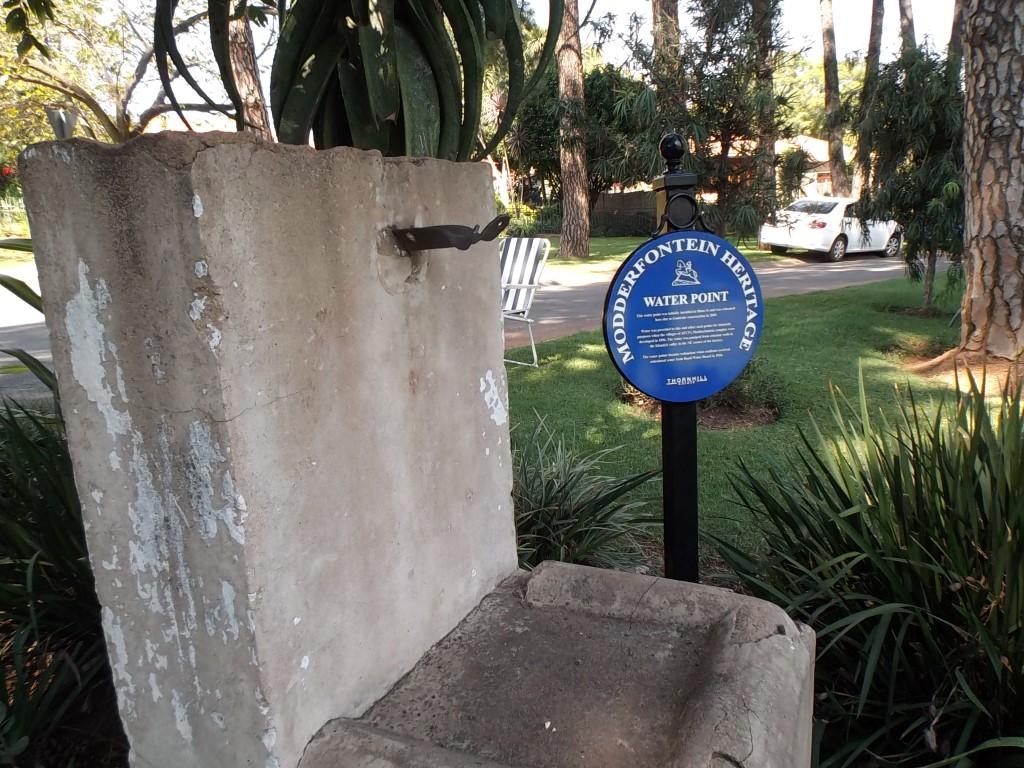 On 5 April 2017, Keith Martin, who heads up the heritage community in Modderfontein, unveiled the first two heritage plaques to be erected in the area. This was done in conjunction with the Thornhill Homeowners Association and under the auspices of Joburg Heritage. The plaques are positioned at significant sites within Thornhill Estate.

One site commemorates the first granite rocks to be quarried at Modderfontein. These are located on a specially built platform at 8 Brussels Ave. 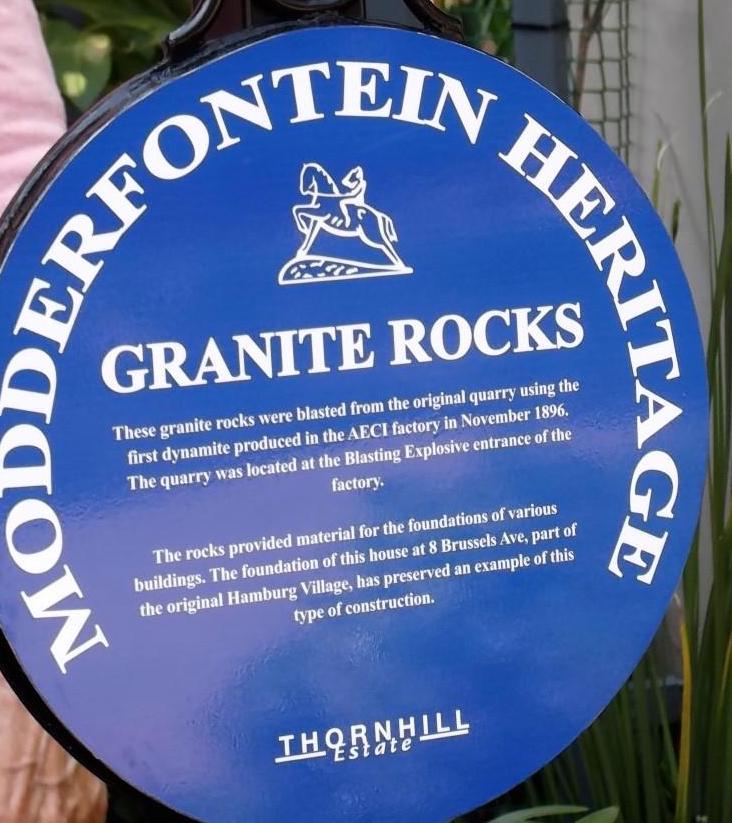 The second plaque marks a water point which originally supplied water from the Klondyke Spring to the residents in the villages close to the factory (see main image).  Thornhill resident Allan Bartram moved the water point to Central Park to save it from being destroyed when it stood in the way of Gautrain rail construction.

The motivation to embark on a programme of erecting blue heritage plaques in Modderfontein was initiated by Keith and the Heritage Group. The Thornhill Estate Homeowners Association (THOA) were very encouraging and gave their support to the project.

“We hope that this is just the start of an on-going effort to highlight Modderfontein heritage and that further plaques will be added to significant buildings in time,” says Keith.  “We also hope to attract more interest in the history of the area by creating awareness through the blue plaques.” 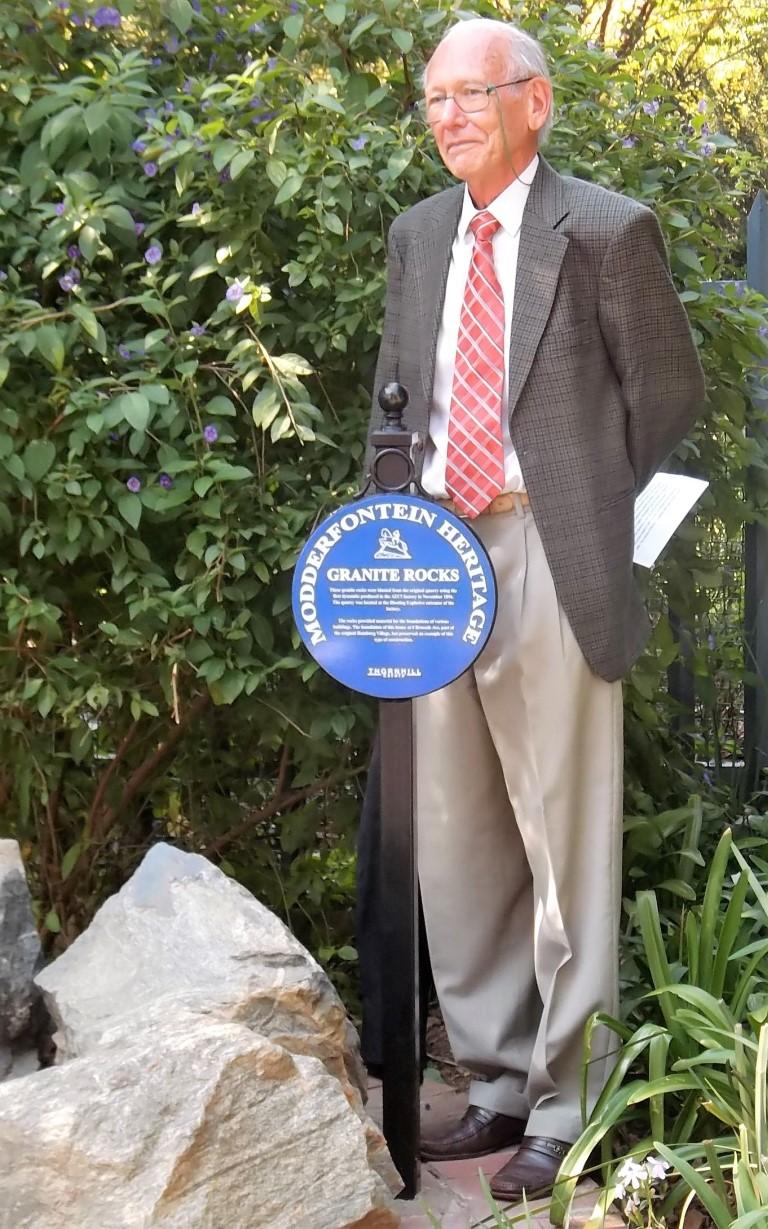 Modderfontein has been allowed by Johannesburg Heritage to headline the plaques with the words ‘Modderfontein Heritage’ as there are sufficient sites in the village to warrant it.

The “Statue of Energy” logo has also been incorporated in the plaque as this is synonymous with Modderfontein.  The horse and rider were originally used on dynamite cartridges made here and were later used by the Sports Clubs and other Modder activities. Peter Ewen pointed out that the logo faced to the right for commercial use and to the left for other applications.

Thornhill Estate Chairman Stephen Burrow made a short speech after the unveiling emphasizing the need to “cherish and respect” Modderfontein’s roots though recognising and protecting its heritage. He thanked the MCS for all it is doing to help achieve this.  He also thanked several people who had been involved in this initiative:

Individuals like Karl Kohler, have assisted in identifying the most appropriate points of heritage worth preserving while others, like Dennis Goodchild, have taken the time to assist us with the means to mark these locations clearly. Without individuals from our communities we would not be able to manage or maintain things like this so it falls on me to recognise and thank Gerrit Calldo for building the platform for the rocks, Martin and Janice Volker for looking after them while we got our act together and, again Dennis, for securing the plaques.  Recording this event for prosperity, via pictures, is Vicky Keenan and thanks to Eileen Powell for the catering and especially Sally Hogan for organising the entire event. 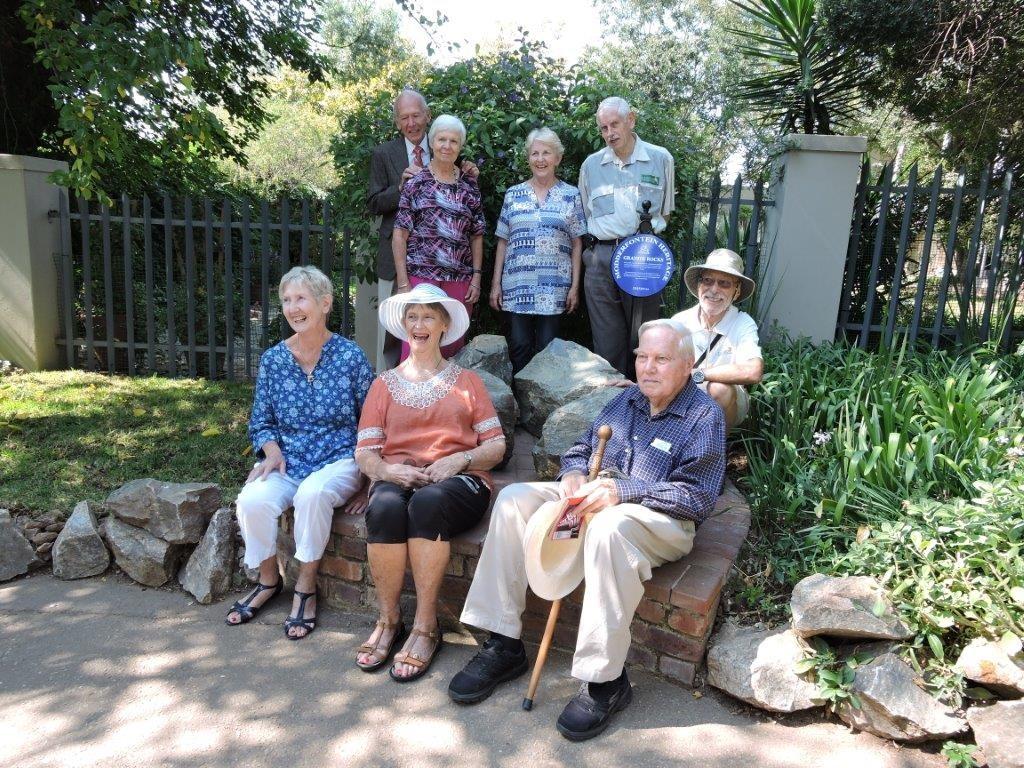