Memories of Grand Prix Racing in Johannesburg in the 1930s

I have noticed that many people are trying to establish the location of the Lord Howe Race Track in Kelvin. It is possible that the borehole is still there so if one can find it the rest may fall into line (see sketch below). Another clue that could assist the heritage enthusiast is that the main straight was at the top of a hill and finished in a dip. I can recall these details as I spent quite a bit of time in the pits and in the grandstand as a child as my dad, Prosser Roberts, was a fearsome racer during the 1930s. He raced the Bugatti pictured above. 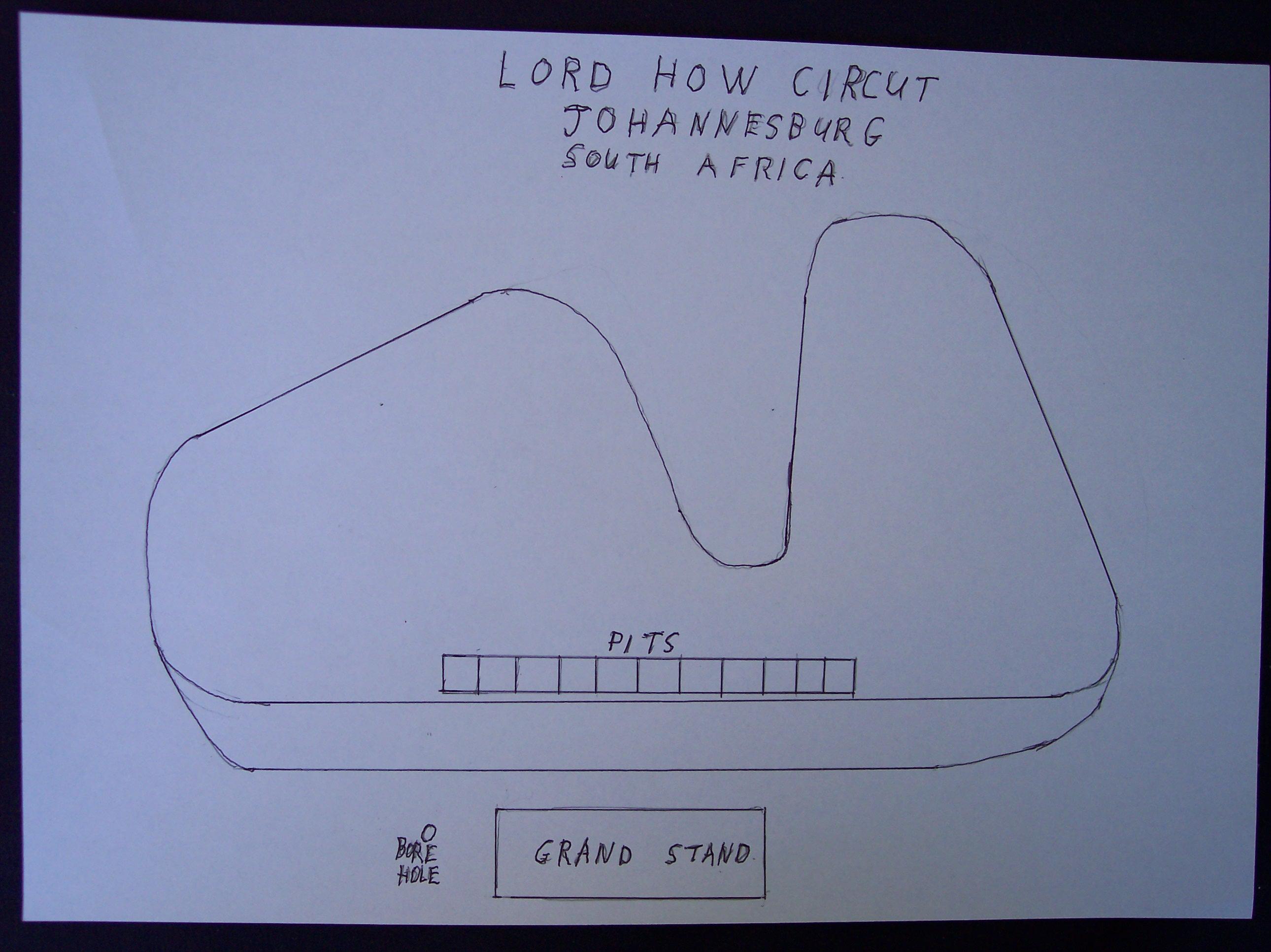 Sketch of the Lord Howe Race Track in Kelvin, Sandton

Memories of the Lord Howe Circuit

The borehole was a godsend in the summer months as the track got stinking hot. I can remember walking from the grandstand to the borehole for a drink of that cold clear water but by the time I got back to the grandstand I was thirsty again! It had an old reciprocating pump driven by a Villiers two stroke motor with no silencer. The crack of the motor’s exhaust hurt my ears. The drive was a flat belt which was looked after by a kind hearted old man who was liked by everybody. When you arrived for water he would give the belt a pull to start the motor and when you were done he would short the plug with a screwdriver.

My dad would often take my brother and I for a run to warm up the engine but once, just before the pits were cleared for the big race, he took me on a test run which was clocked on a stop watch by one of the other drivers. We exited the pit lane and made our way gently around the track towards the main straight. My dad hit the accelerator and we passed 120 MPH! I remember I was told to close my eyes at top speed to protect them (I was jammed between my dad and the side of the cockpit at the side of the windscreen so there was no protection). I tried to open them a crack to see the speed but I could not open them at all! These runs were common place in order to ensure the car was performing normally. When we got back a member of the pit team asked how I liked the speed. My reply was, "It is better than standing around doing nothing". The laughter this brought about lasted a long time. It became a bit of a hit phrase from that point on.

At the end of a racing day there was the ladies race which always had two ladies: my aunt Clo in my dad's Bugatti and our friend Bruce’s wife driving his Teraplane. Almost every time my aunt came around the hairpin bend she would accelerate too hard and spin out. I can still hear the groan from the grandstand. Bruce’s wife who always trailed would then nip past and win the race. Incidentally the main races were run anticlockwise but the ladies races were run clockwise. 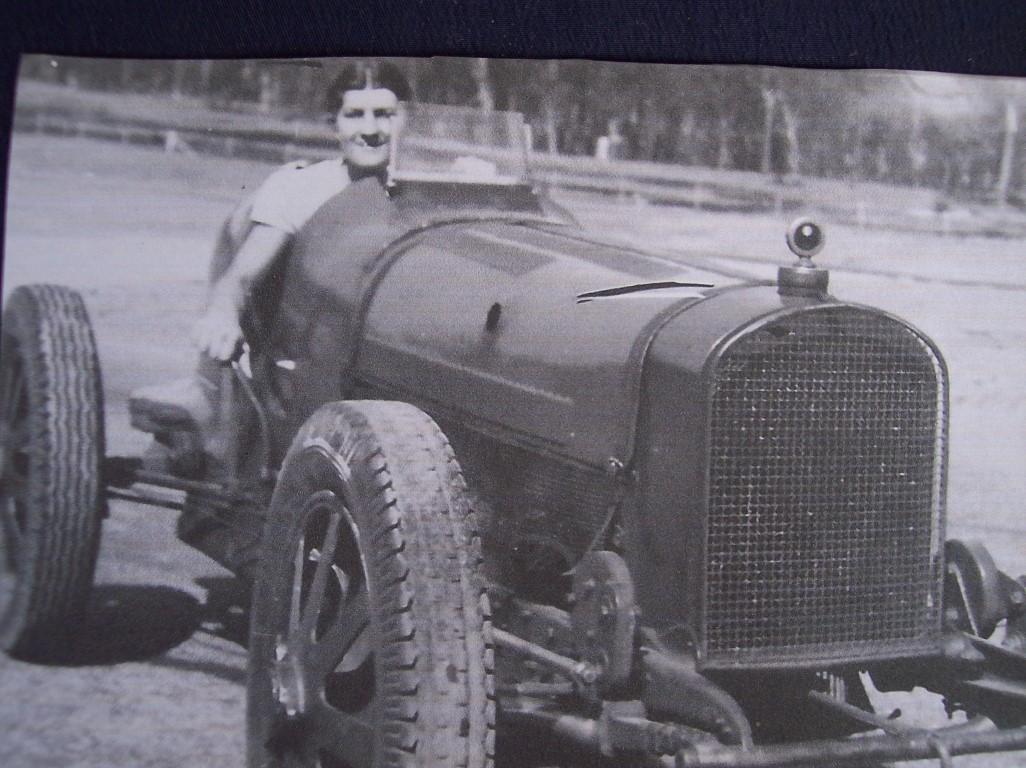 Aunt Clo in my dad's Bugatti

Bruce racing in a Teraplane.jpg

Our friend Bruce in his Terraplane

Engines overheating was quite a problem in those days. The reader may notice that my dad’s Bugatti has an oversize radiator. If you come across pictures of the Auto Unions with no covers around the engines that would be at the Lord Howe Circuit. For half my life I thought that was how they were made until I came across a picture of them with their bonnets on.

The Germans must have been very disappointed racing at Lord Howe as Hitler ordered them to use only tyres made with rubber made from coal. With the heat of the track and the fact that the track design allowed the cars to come around the last bend before the main straight at seventy to eighty MPH they were up to 120MPH by the time they were a quarter of the way down the main straight. That was where they shed the treads on their tyres, rubber flying in all directions. What a disaster!

The picture below is of a two seater Bugatti which I think is the second Bugatti my dad bought. It had an eight cylinder engine. He was disappointed in this car because its top speed was the same as the super charged four cylinder he owned. My mother was French so we had no difficulty dealing with Mr Bugatti. The Bugatti crank shaft was a compo design made up of a series of discs and pins. My dad tried to buy a conrod pin and rollers but Bugatti claimed the factory was the only one that could do crankshafts. This racing lot were very capable mechanics, probably the best in the country. I don’t think there was anything they could not do. They were all highly insulted, the cost of shipping the crank to France and back was as much as the car was worth. This was over 300 pounds which was half the price of a small three bedroom house in those days! 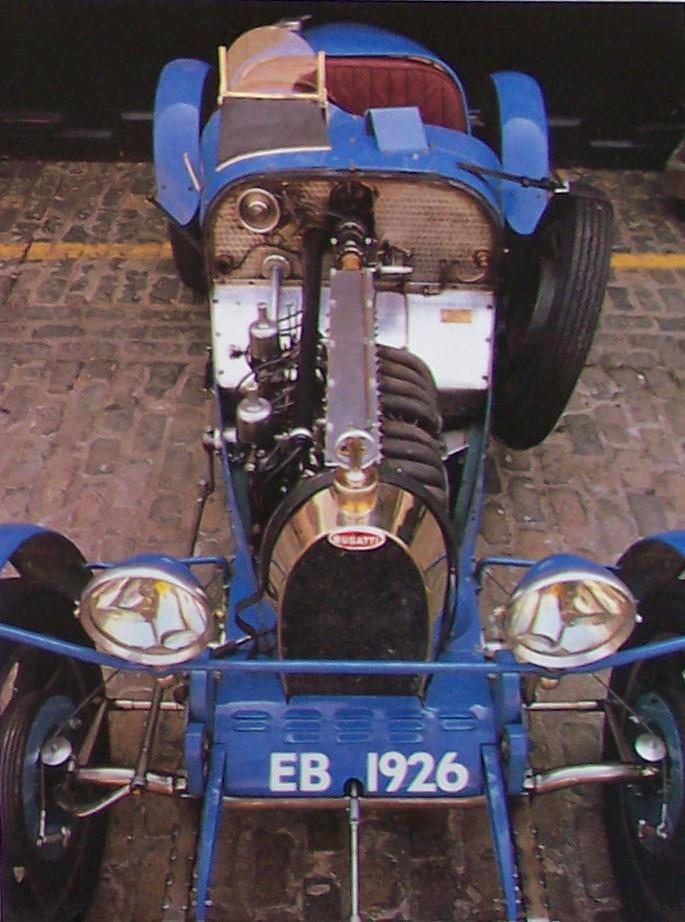 The Dangers of Racing

My dad had a very close shave during a Grand Prix in East London. We all went down on the overnight train to watch him in action. During practice some yahoo in a Ford V8 coupe convertible with an opslaan tent crossed the veld to get onto the track and started racing along the track in the wrong direction. He collided with my dad head on in a cutting. My dad tried to keep left but this bloke must have frozen. The hit was head on and it almost killed my dad. He was in a coma for four days but thankfully he was as tough as leather. Three weeks later we were on the train home looking forward to more racing at the Lord Howe Circuit.