The Famous Foundation Stone without its Building 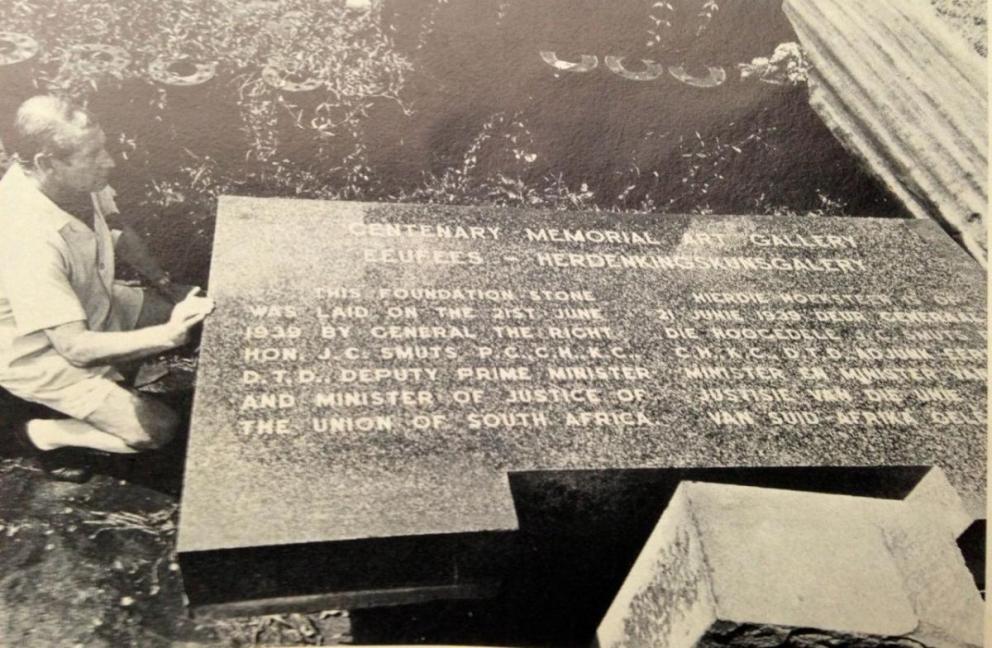 The article below tells the intriguing story of the foundation stone of the planned but never built Centenary Memorial Art Gallery in Pietermaritzburg. The piece was compiled by HSB Humphreys and appeared in the December 1975 edition of Restorica. It would be very interesting to find out where the foundation stone is today. Did it find a suitable home? Has it remained in storage? Has it disappeared? If you have any details please email admin@heritageportal.co.za. Thank you to the University of Pretoria and the Heritage Association of South Africa (HASA) for giving us permission to publish.

In 1937 or early, 1938, the City Council of Pietermaritzburg launched a competition for the design of a Centenary Memorial Art Gallery, which, so far as can be ascertained, was won by a Durban architect, one Mr Geoffrey le Sueur.

In a subsequent publication (a Souvenir Hand-Book commemorating the Centenary of Pietermaritzburg, 1838-1938), the following appeared as an item on the programme for the proposed Centenary celebrations (Page 35):

An order has been placed for the foundation stone of the Centenary Memorial Art Gallery, which stone it is intended shall be laid at the earliest opportunity at the site of the proposed building on the Market Square".

The foundation stone was actually laid by Field Marshall J C Smuts, then  Prime Minister of the Union of South Africa, after the start of World War II, on virtually the same site where the new Library has now been built. World War II intervened and the gallery was never completed.

This foundation stone, believed to lie in the basement of the City Hall, could, if still in sufficiently well-preserved condition, be placed in a suitable position on the originally-selected site, for instance, in the entrance to the new Library, with some indication of its historical significance, together with a sketch plan of the then-proposed Centenary Memorial Art Gallery.

Besides commemorating Pietermaritzburg's centenary and the visit of an eminent South African and world statesman, it would be of considerable interest to the public of Pietermaritzburg.

Close up of the foundation stone (Restorica)

The presence of this foundation stone  in a selected position in the new Library should not assort oddly with the appearance and purpose of the Library, and it is not without precedent since, the foyer of the Johannesburg Public Library, for instance, plaques and objects of a similar nature, which have been incorporated in the building itself or form permanent exhibits there, provide a focal point of interest in the City.

[We assume the piece above was written much earlier than December 1975 as six months before the Natal Witness reported that "The Capital's "rolling" foundation stone seems no nearer to finding a permanent home than it was when first laid out for a building that was never built." The article emphasised that the idea that the foundation stone be incorporated into the Library came to nothing and that the suggestion that it be placed in the Tatham Art Gallery was dropped. The Simon van der Stel Foundation suggested that it be placed in Churchill Square but after investigation the City Council recommended that the matter 'be shelved for 12 months'.