The Face of the Rand Club Bids Farewell (for now) 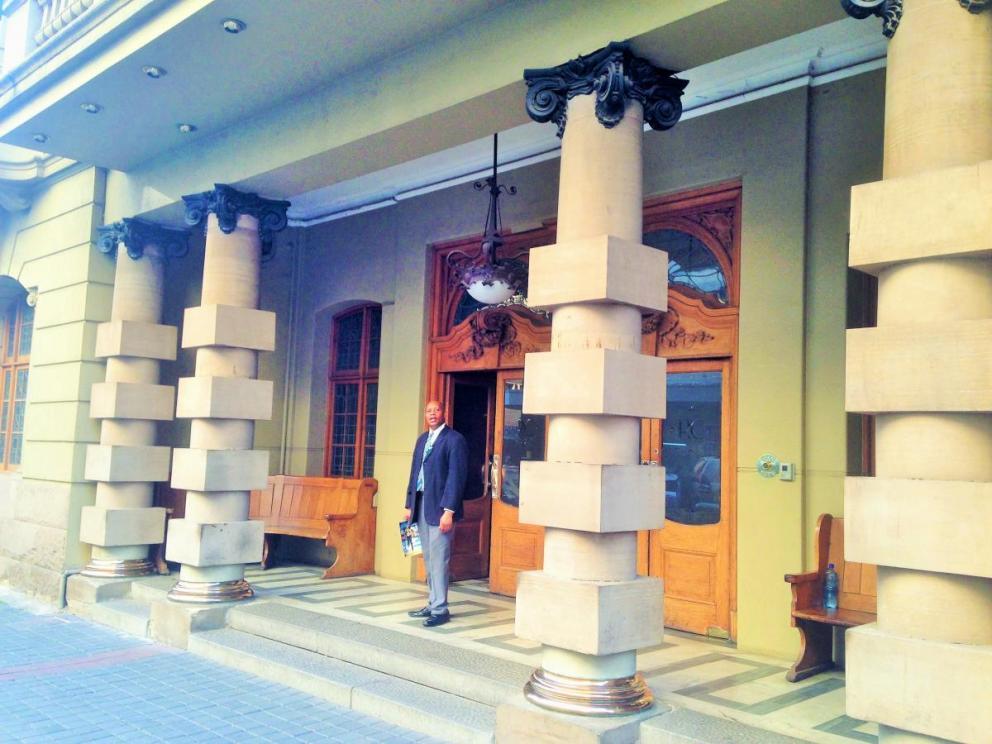 By now most Joburgers will be aware that on 30 September 2015 the historic Rand Club shut its doors. Whether this move is temporary or permanent is a matter of debate but there is one man who believes emphatically that the best days of the Club are ahead. That man is Wilson Mphaga, the larger than life personality who has welcomed members and guests to the Rand Club for the past decade and a half. Earlier this week we were lucky enough to sit down and chat with the man that many have come to know as the ‘Face of the Club’. 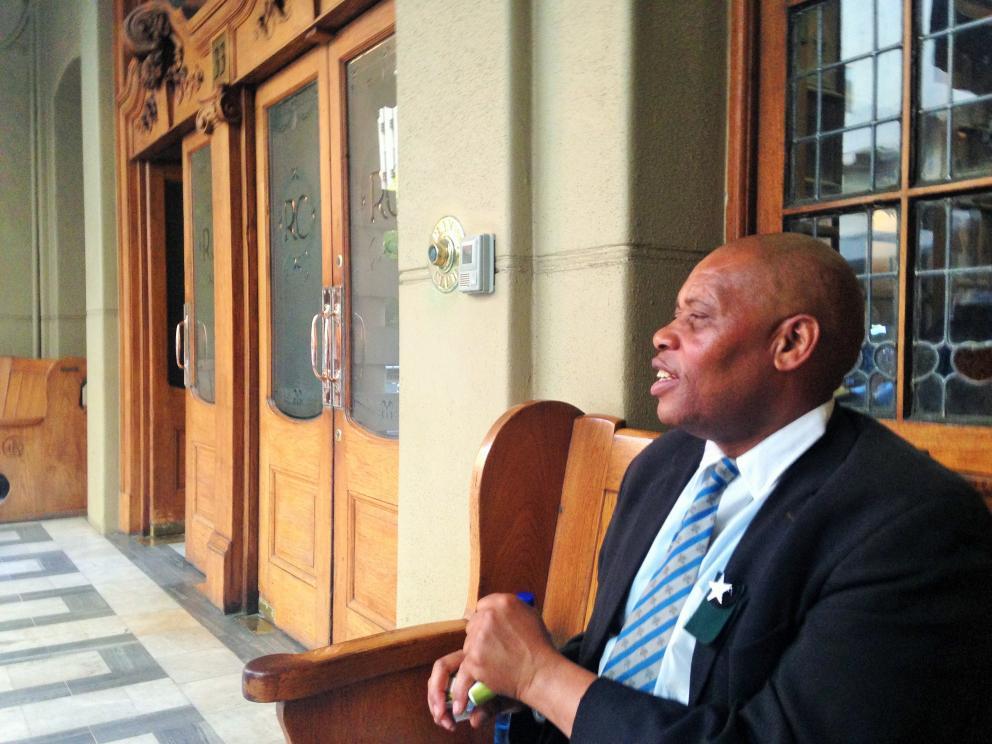 Wilson’s career at the Rand Club began in 1983 after a successful interview for a position looking after members who stayed overnight on the top floors of the Club. This was where he learned how to relate and banter with members in a friendly and professional way. One member he got to know particularly well was a doctor who worked at Baragwanath Hospital. Wilson recalls proudly that the doctor loved the service and facilities of the Club so much that he made it his permanent home.

After a number of years establishing his reputation among staff and members, Wilson was offered the job of Library Assistant. In this role he came to know almost every book in the Library and became particularly fond of the Club’s collection of detective novels (this probably had something to do with the volunteer police work he was involved in at the time). He remembers knowing how each member liked his coffee and how the Club would cater for each and every need even down to a particular type of sugar that a member liked.

It was during this time that Wilson signed up for a business course with a local institution and passed easily. The skills he acquired came in very handy when the Head Librarian left the Club for Wits University and he filled her shoes for a period of nine months. One day in the late 1990s the General Manager came to chat to Wilson and asked him how he would feel playing a concierge type role for the Club. The GM remarked that Wilson’s friendly demeanour and police background made him the perfect candidate for the job. Wilson accepted immediately and thus began his sixteen year reign as the ‘Face of the Rand Club’.

While we were interviewing Wilson in his ‘office’ we were lucky enough to see him in action numerous times. Every member knew him well and the banter was remarkable to listen to. Over the years a number of hotel groups heard of his talents and arranged for him to provide training for young aspiring porters. One of the larger contracts he was involved in was for the Mapungubwe Hotel located next to the Anglo-American precinct. During one session two Anglo managers, who were also members of the Club, saw Wilson conducting the training and feared that he had left the Club. To their relief Wilson assured them that this was not the case...his loyalty would always be to the Club first!

One of the few moments of sadness we observed during the interview was during Wilson’s response to the question ‘What is the biggest change you have seen over the years?’. Referencing the current predicament he reminisced about how busy the club was during his early years:

When I started, the Club was busy… very busy. I’m telling you! They even had to serve food down in the Billiard Room it was that busy. They had functions in the main dining room every day. I’m talking 200-250 people every day. For lunch every room was full! It was very good. 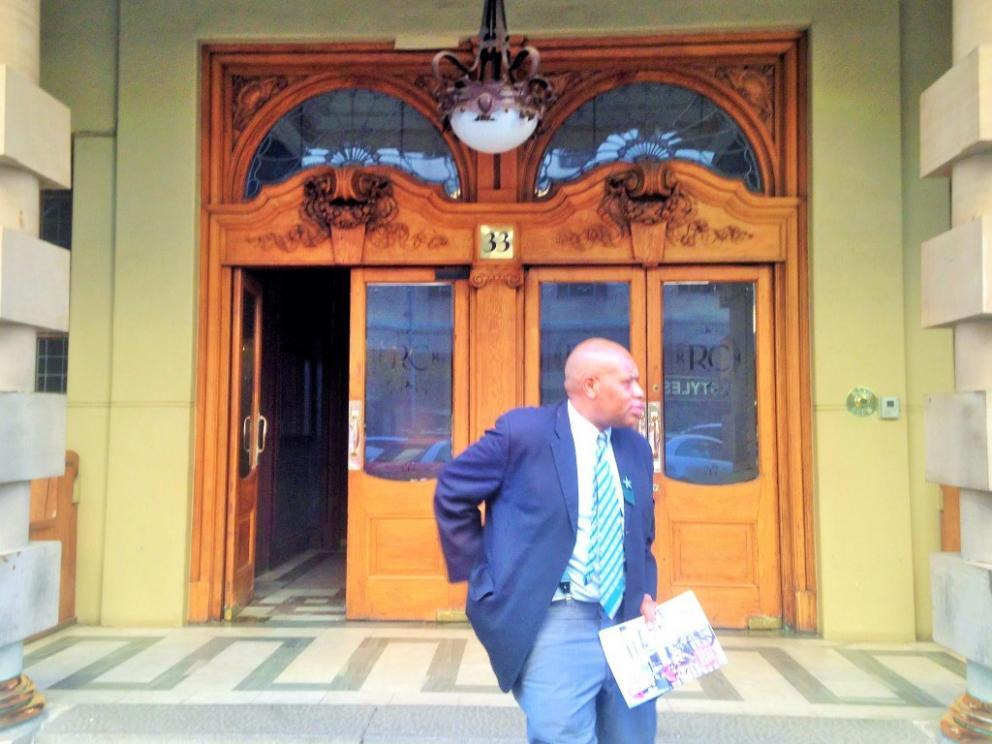 Wilson outside the entrance to The Rand Club (The Heritage Portal)

Throughout our conversation Wilson made it clear that he was happiest when the Club was full. He remembered the many themed parties and told us that the Rand Club taught him what a bachelor party was all about! We probed for some details but he just smiled.

Another moment of sadness emerged when he spoke about an incident where the accountant was caught siphoning funds away from the Club. We sensed that he felt huge disappointment that a fellow staff member would behave this way towards the Club. The moment passed quickly as he went on to recall the great contributions of so many other staff members.

When we asked him what the next chapter had in store for him he replied that he would be back when the Club needed him but in the meantime he had some big plans. One of his immediate goals is to achieve his best ever time in the Comrades Marathon. Wilson has completed 20 Comrades which puts him in an elite group of runners in South Africa. His best time is around the 7 hour mark but with some time on his hands he hopes to be able to better this significantly. ‘Top Ten perhaps’ he told us with a big smile on his face.

Interestingly it was during one of his Comrades that he learned about the infamous Rand Club fire of 2005. The General Manager was following the race as spectator, spotted Wilson and shouted out that the Club had been hit by a massive fire. When Wilson arrived back in Joburg after the race the Club was still smouldering.

Wilson may also try his hand at farming. Over the years he has invested back home in Limpopo and sees the potential of running a small chicken farm (small to start with at least). Whatever he decides to do we have no doubt that he will do it with a smile on his face!