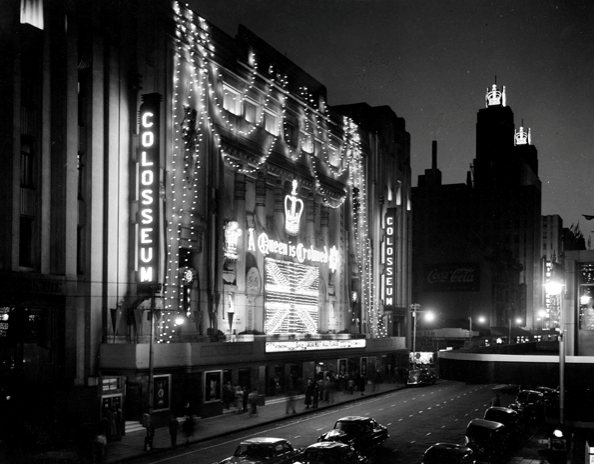 Who remembers the Colosseum in Johannesburg? This theatre belonged to the collection of theatres built for pleasure and entertainment when one went to the movies in style and cinemas attracted audiences of thousands watching a single block buster grand epic. With its orchestra pit the Colosseum was versatile; it was a large venue for movies, concerts, and stage shows. It closed in 1985 and was demolished, it transitioned to “Lost Johannesburg” in a flash. 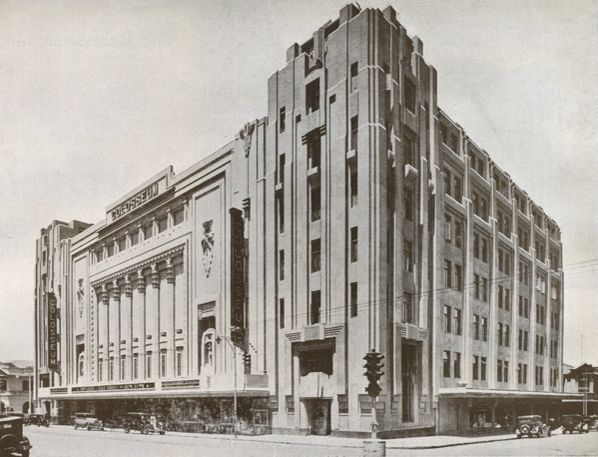 I lived out my teenage fantasies in the cinemas of Johannesburg. His Masjesty’s, the Empire, the Plaza and the Colosseum were the magnets that drew me to spend my 2/6 or 4/- (shillings) for a front seat in the stalls or one high up on the raked balcony and if there were vacant seats we crept backward. Unlike theatre, cinemas charged more for distant panoramic views than close up to the screen. I adored the sense of occasion and luxury of a cinema visit and saw all of the great epics, now classic movies of the fifties and sixties in a Johannesburg cinema - The Ten Commandments, My Fair Lady, The Sound of Music, Breakfast at Tiffany’s, South Pacific, Dr Zhivago, Lawrence of Arabia. I adored Audrey Hepburn, Julie Christie, Julie Andrews, Mary Martin, Omar Sheriff, Peter O’Toole and many others. The interiors were as plush and comfortable as the foyers with those sturdy velvet upholstered seats and the little curved metal ashtrays screwed to the back of the seat ahead of yours. Yes, people smoked heavily in cinemas, Rothmans, Mills, Peter Stuyvesant. Everyone watched the movie through the blue haze of the cigarette smoke. It was all rather low brow but no more so than today’s attempt at fantasy in the gambling halls of Monte Casino. 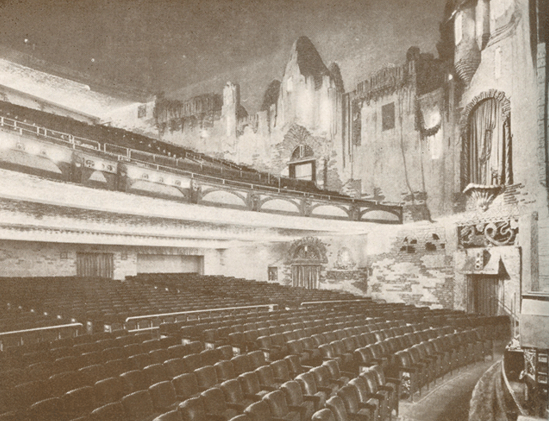 Remember that expectant swish of the red high pile velvet curtains, gathered into bunched rosettes? One was ushered to one’s seat by trim uniformed usherettes or ushers equipped with torches and at interval the same young usherettes sold choice candies and chocolates on a tray suspended from their necks on a heavy duty ribbon. Those were the days when “God Save the Queen“ (I was too young for God Save the King) ended movie screenings and one stood up with due respect to the glamorous young but very remote Queen Elizabeth.

It was the cinema that celebrated the coronation of Queen Elizabeth in bright lights in 1953 (see main image) and we went to the movies to see it all on screen. The weekly trip to the cinema whether the local Royal or Astra or the Victory or a trip to central Johannesburg was part of life’s routines and pleasures.

The ladies powder room was rather like the a private domain for women who powdered their noses, at “dolly varden” dressers or reclined on those velvet setees for two for the tete-e-tete, it was discretely lit, with deep pile carpets and ornate furnishings. It all seemed rather a waste to me as one would rush in and out at interval. 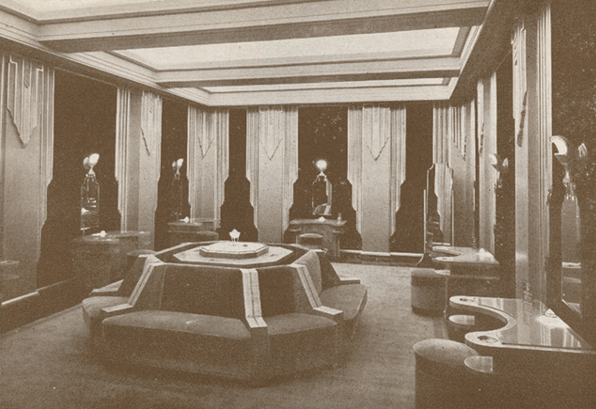 I am drawn to write about the experience of the Colosseum because this month a brochure and collection of cuttings came my way about the fate of the Colosseum in the early 1980s. The demolition of this extraordinary theatre was proposed and a campaign was mounted to save the Colosseum “the wonder theatre of the miracle city”. The Johannesburg Central Business District Association (CBDA) proposed to save the theatre, owned by SANLAM and later sold to the Prudential Assurance Company, via a private placing and to raise a total of R14 million to purchase the Colosseum. The Transvaal Heritage Committee of the S A Institute of Architects supported the initiative. The forlorn objective was “to preserve and improve the city’s last great theatre and auditorium as a vibrant and viable centre for plays, musicals, symphony concerns, conferences and cultural activities; to strengthen and enlarge the urban core of Greater Johannesburg... and to constitute a worthy project for the Johannesburg Centenary of 1986.” 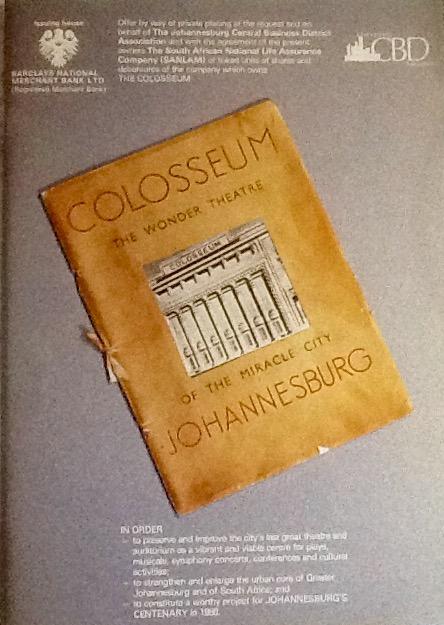 The pamphlet that came my way

Perhaps all it did need was imagination, public spirited organizers, and a large pot of money. Yes it was “too good to let go”. But the economics of the time was wrong. Johannesburg died at night by the late seventies, when the city became a ghost town and people chose to go the cinemas in the suburbs rather than journey into town. Television had also arrived in homes from 1976. For those emporiums like the Colosseum the writing was on the wall. Could the Colosseum have been saved? 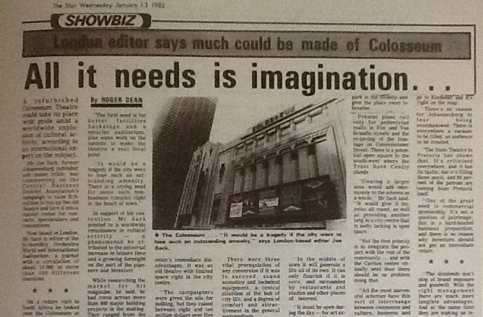 However, the Save the Colosseum project came to naught. The Coloseum’s limitation was that it had one screen (we all watched the same movie) and by the 1980s the style of the movies was to offer greater choice in smaller more luxurious movie auditoriums. The Colosseum was demolished and lost forever and another office block was built which has been converted into a 10 storey residential block. 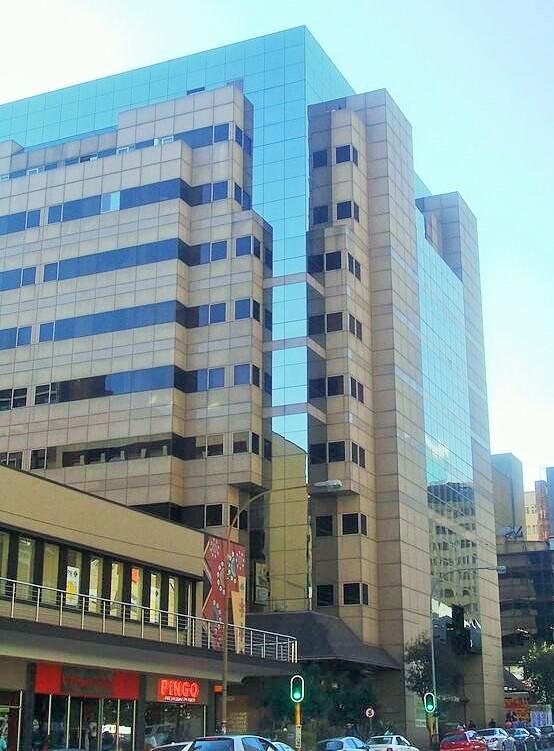 A recent photo of the Colosseum Residential Building (The Heritage Portal)

It is the ideal home for the New Age urban city person who might appreciate that once upon a time this was the site of the Art Deco Colosseum, a great masterpiece. It can only be choice property marketing that tries to use a heritage that disappeared decades ago to market a residential apartment block that retains nothing of the old Colosseum but the name. [It is interesting to note that the new building was the headquarters of the IEC during the 1994 elections. Plenty of history has happened on this site over the decades!]

The architect of the Colosseum Theatre was P Rogers Cooke and it was built between 1932 and 1933. P Rogers Cooke was the architect of several fantasy themed movie houses in South Africa. The Playhouse in Durban in faux Elizabethan half timber style was another and my husband recalls the magic of its starry sky as the fantasy place of his childhood. In Johannesburg, the Colosseum was opened by Jan Smuts in 1933. Van der Waal sees it as a milestone building. It filled an entire block on Commissioner Street, and was bounded by Von Brandis and Kruis Streets. It was built by the African Consolidated Theatres. As Chipkin explains, Commissioner Street was the street of movie houses and theatres, with symmetrical neon name signs illuminating the night street scene and making for both corporate identity and for an exciting and mesmerising New York look rather like Times Square and Broadway. 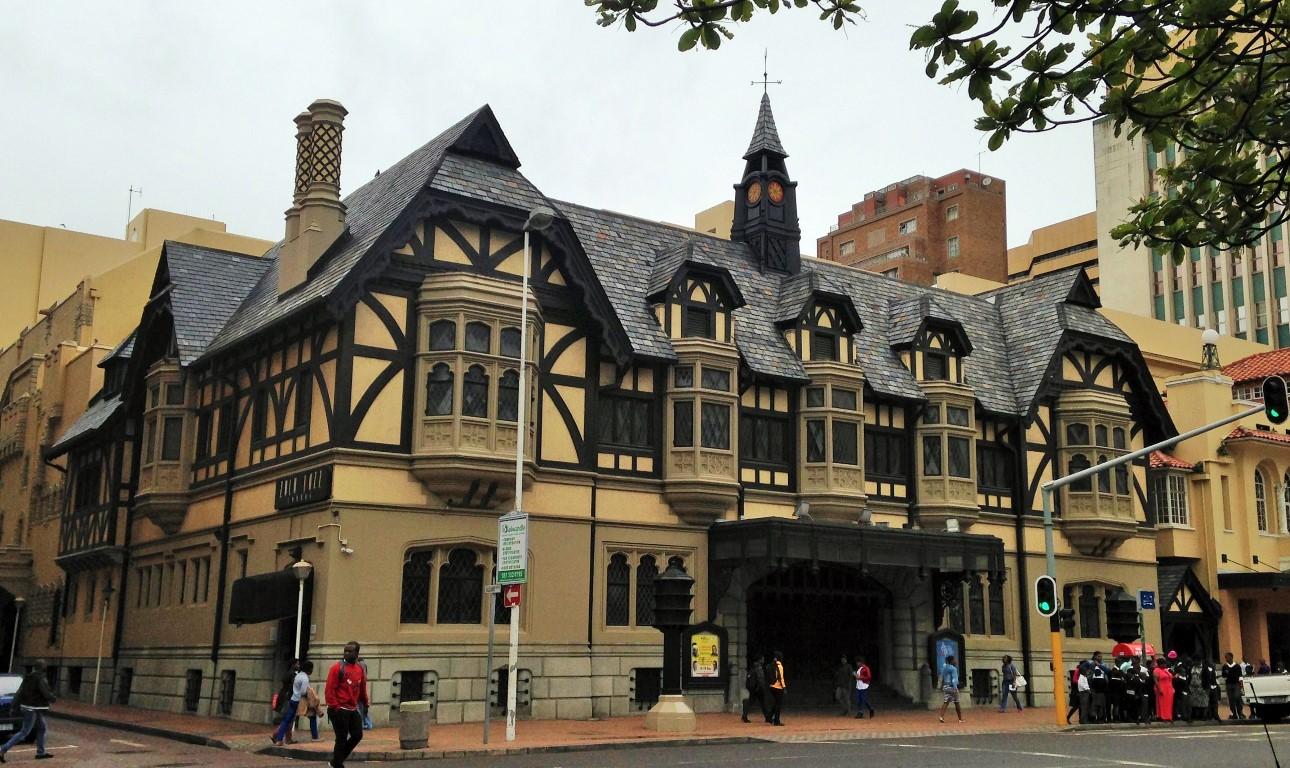 The Playhouse Durban (The Heritage Portal)

The interior was magical, certainly for the child and even as I grew into the teenage years I still loved the Colosseum. One was one of an audience of 2300 spell bound by the midnight blue sky filled with the stars of the southern constellations and moving milky clouds. Each star was actually a hidden light. It was a fantasy world of a twinkling night view surrounded by castles. There were turrets and towers, spires and steeples. They all looked like castles straight out of Grimm’s fairy tales and I was Rumpelstiltskin. One could imagine the dragons, fairies, dungeons, giants, knights and heroic handsome princes all being there behind those castle walls. It was very three dimensional. I never knew if I was on the outside looking in or on the inside looking out. These were the castles of my dreams. Were we not in another castle looking out at the magnificent sky and other tall castles or were we just the voyeurs privileged to look in on this scene?

Chipkin describes the interior as a Gothic fantasy and adds that Johannesburg theatre goers were never worried about the eclectic blend of historical motifs taken from Rome, Egypt, Italy and happily mixing eras. Chipkin’s fulsome tribute to the Colosseum must be read to pick up on the many architectural reference points and origins of this type of theatre extravaganza. It was all meant to be exciting, mesmerising and over the top. You were transported into whatever fantasy your imagination sprung upon.

The interior was the work of William Timlin an architect and artist. He was also the author and illustrator of a wonderful book “The Ship that Sailed to Mars” (1923), a cross between fantasy, fairytale and science fiction, today this book has the reputation of being the most original and most beautiful children’s book of the 1920s. The original book is rare and hard to find and its price tops thousands of dollars. A new edition was brought out by Dover in 2011 (Cella Editions) with a superb introduction by John Howe.

The Ship that Sailed to Mars - Timlin.png 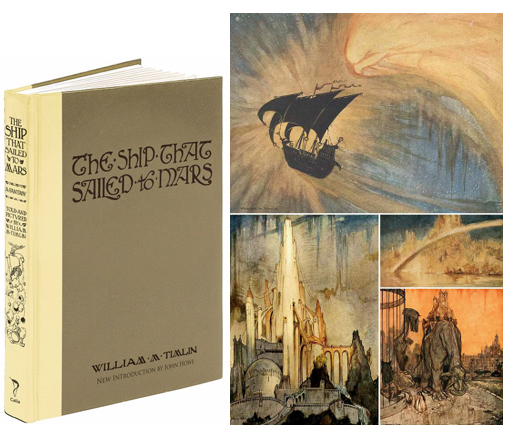 I find myself turning the pages of the Save the Colosseum promotional pamphlet with affection and admiration and not a little nostalgia for a Johannesburg that exists only in my memories. I can of course reach for my copies of  Chilvers and Timlin’s small volume on South Africa (I do not own a copy of The Ship that Sailed to Mars - that one is still on my wants list) and pay tribute on The Heritage Portal to both P Rogers Cooke and William Timlin. 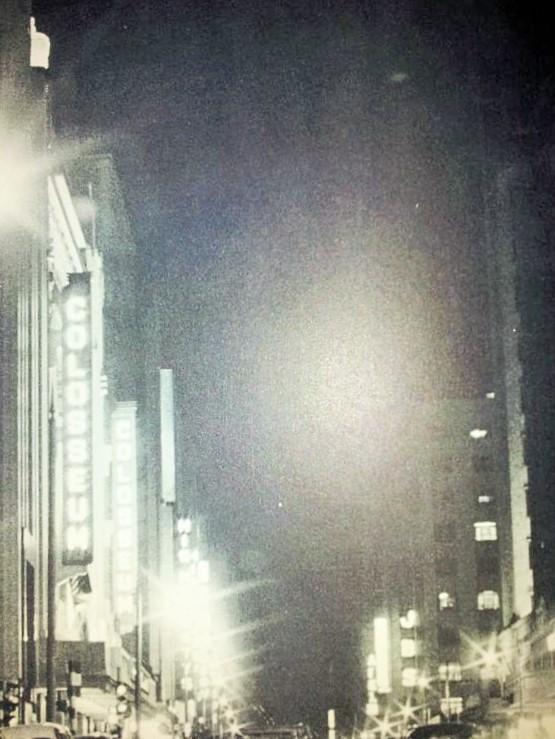 Herbert Prins and The Colosseum Award

Heritage icon Herbert Prins was the stalwart leader of the Save the Colosseum campaign. His own story is a fascinating one as he found himself facing a legal challenge when his reputation was besmirched by the Prudential Assurance Company when accused of potential personal gain for his heritage efforts. Herbert had prepared plans for the adaptive reuse of the Colosseum with a proposal for a basement level link from the Colosseum to the Carlton Centre. He had presented these plans free of charge to the Prudential but with no obligations or commitment to use. It was all pro bono work in the interest of saving the Colosseum. He sued the Prudential for defamation, and eventually the company settled and with the financial recognition, Herbert created the Colosseum Award for significant heritage work in Johannesburg. This was a floating trophy designed by Cecil Skotnes, with a Skotnes art work given as a permanent recognition to the recipient. The last recipient of the award (part of the now defunct Halala Awards) was Yael Horowitz in 2012 when her work for the Shandukani Clinic in Hillbrow was recognized (click here to read about the adaptive reuse of Shandukani) 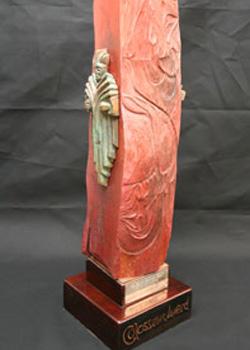 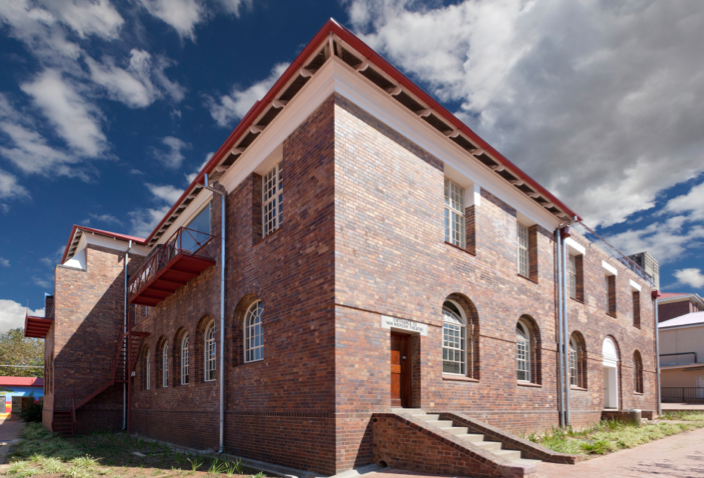 Herbert reminded me that Francesco the clown also threw his weight behind the campaign to save the Colosseum and that they had taken the protest to the streets of Johannesburg. Herbert, some 30 years later is still fighting for heritage and the cause of preservation and his latest opinion piece on the Heritage Portal about the work of SAHRA (click here to view) and his 2015 statement on the Pink Buildings Saga (click here to view) are worth reading for their clear headed logic and careful argument. Herbert himself deserves an award for his lifelong heritage work and leadership.

Heritage work is rewarding: the cherry on the top is saving a building. Heritage work requires energy, commitment, a thick skin, clever ideas for future the use of an old precious structure and dedication.You have to doggedly keep up the fight for heritage and its recognition. Herbert we salute you!