Crossing the Vaal (at Vereeniging)

The Vaal river, a formidable obstacle at times, had to be crossed by the early settlers to open the way to the North. One of the crossing points in the days just after the Voortrekkers arrived was Viljoen's Drift. Josua Jacobus Viljoen had occupied the farm, Oshel, to the south of the river opposite what is now Vereeniging. The name Oshel (translated ox hell) came from the sandy ground which made life difficult for the oxen pulling a wagon. He selected a convenient point for an ox-wagon to cross the river, made some improvements and opened it to other farmers in the area. 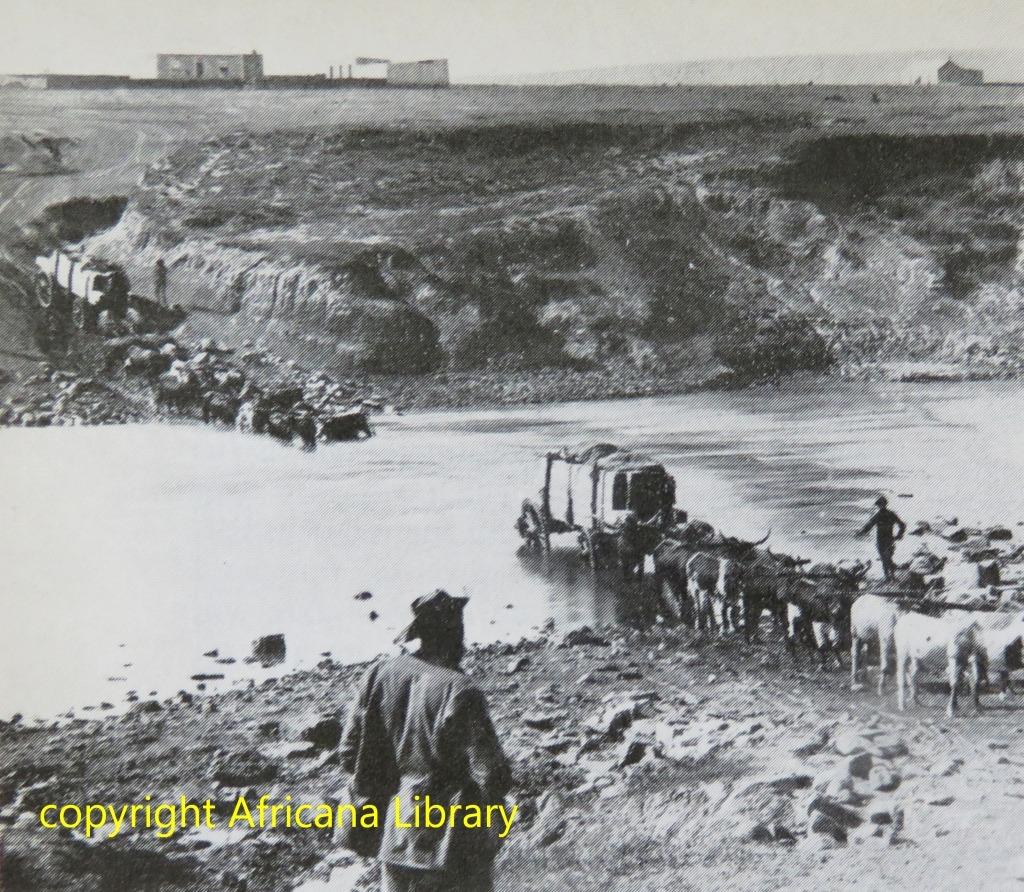 The Drift in the 19th century (Africana Library Johannesburg)

The original caption of the image above reads: 'the last two wagons of a transport rider's convoy crossing the Vaal River… heading north with timber.' There is a bit of a problem with this. Studying the shadows it appears that the convoy was actually heading south. In addition to this, the mountain range in the background does not make sense (but looking from the south it could be the Suikerbosrand).

In 1857 Josua’s son, Hans Viljoen, placed an advertisement in the Staats Courant in Potchefstroom offering a ferry service to take loads across the river; wagons, horses, large and small stock, at very reasonable prices. This was thus the first organised crossing point in this area.

Ferry across the Vaal discharging its cargo -Technorama Museum Vereeniging.jpg 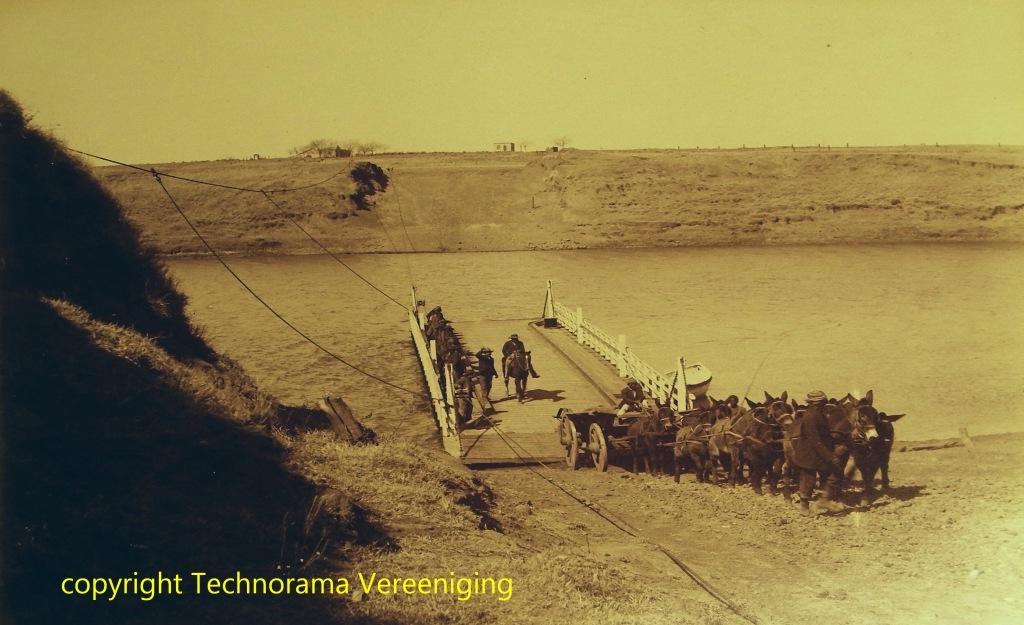 The image above shows the ferry discharging a donkey-drawn wagon. Donkeys were common as draught animals after the rinderpest of 1897. The drift was used by the British when they came up from Bloemfontein during the Boer war in June 1900. 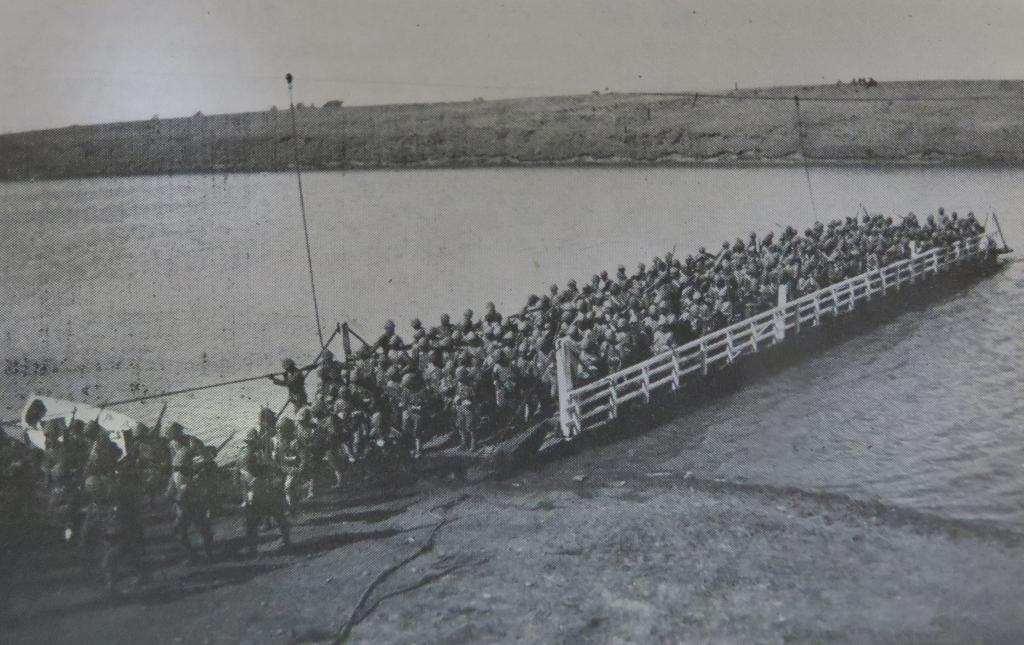 As shown in the image above (taken from the south-side of the river), one can still make out the crossing point. Some years ago some of the cable and the anchor poles could still be seen but alas there is nothing left today.

Landing place of the ferry on the north side of the Vaal - Horst Muller.jpg 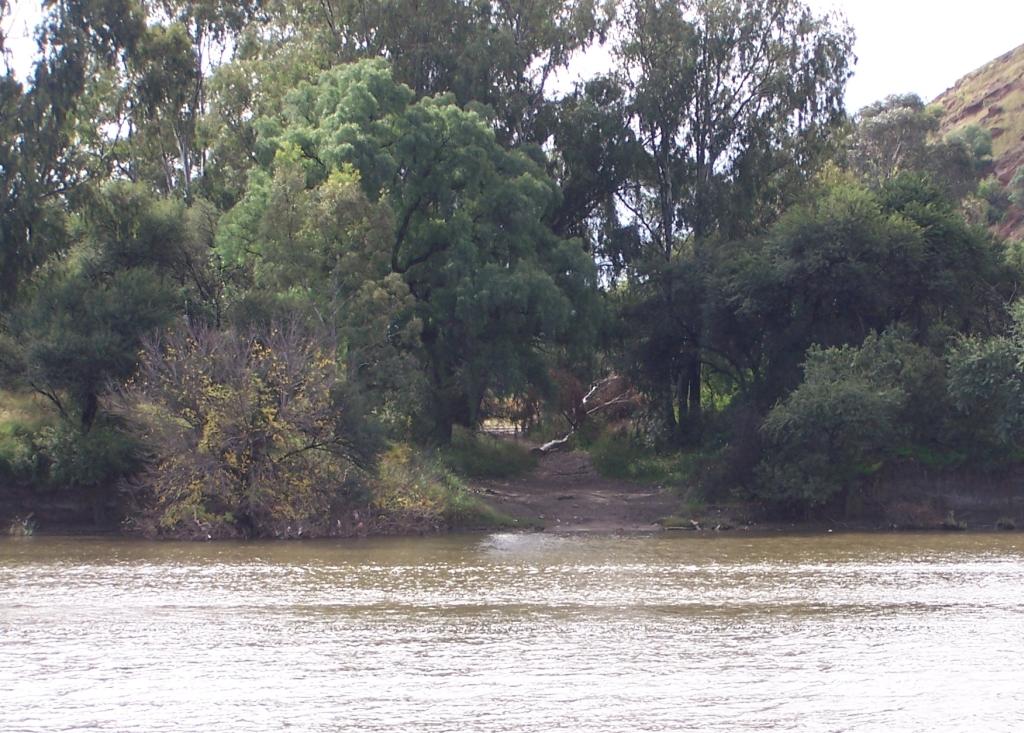 Landing place of the ferry on the north side (Horst Müller)

According to the Viljoensdrif-Gedenk Album (reference 3), the ferry operated until 1923. Another source says it remained open until the 1950s. If this is the case, I don't know for what purpose as the wagon bridge a short distance away was in operation from 1921.

The first bridge over the Vaal near Vereeniging was a temporary railway bridge. Rail construction from Bloemfontein moved at such a rapid rate that it had reached Viljoensdrift before the steel bridge was ready. The reason for the quick construction was competition with the Natal line and the NZASM line from Mozambique. To build the 212-mile line from Bloemfontein work was carried on around the clock. Lighting was provided using a steam engine and a generator. It took 16 months to complete which works out to 5km a week.

In order not to lose out on the lucrative goods traffic the Cape railway decided to erect a temporary bridge. And it had to happen fast, which it did. 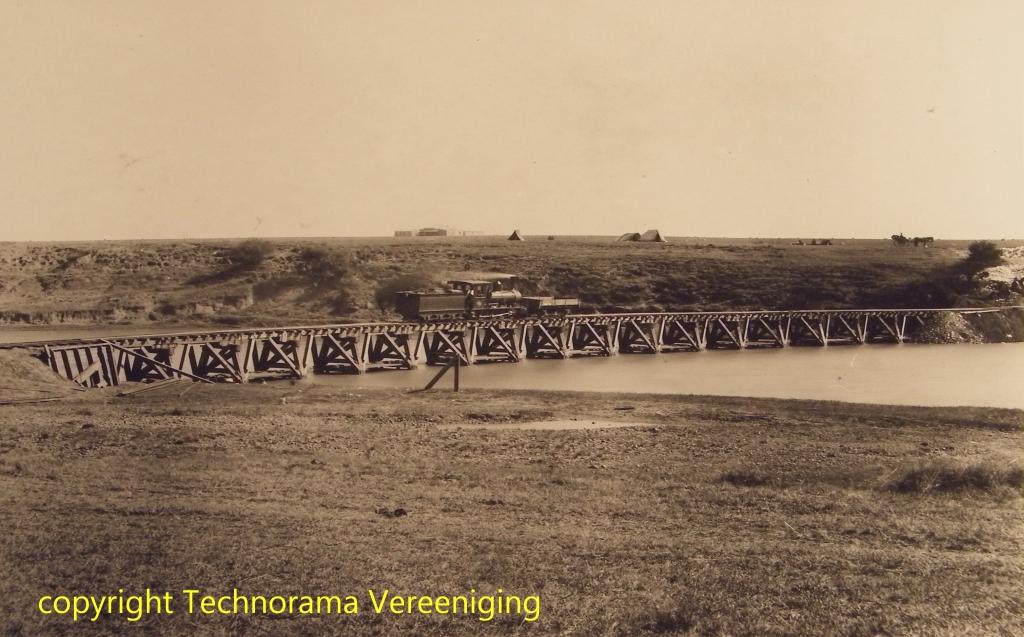 The consulting engineer who designed and supervised the construction was A van Eelde. He was only 30 at the time and had previously worked for the NZASM. It took his team five weeks to complete the task from the day he received the telegram authorising him to begin construction. The exact position is not known. According to the Viljoensdrif-Gedenk Album, it was near the later wagon bridge.

The rail link between the Free State and the ZAR was opened on 21 May 1892 with the presidents of the ZAR and Free State, Kruger and Reitz, in attendance.

Construction of the permanent bridge commenced on 21 July 1891. It had five support columns and six spans of 35m length. The steelwork was manufactured in Germany and shipped to Port Elizabeth from where it was brought up by rail to Viljoensdrift. It now becomes apparent why the bridge could not be ready on time... it needed the rail to bring up the steelwork. The bridge was handed over to the railroad on the 15 Sept 1892. 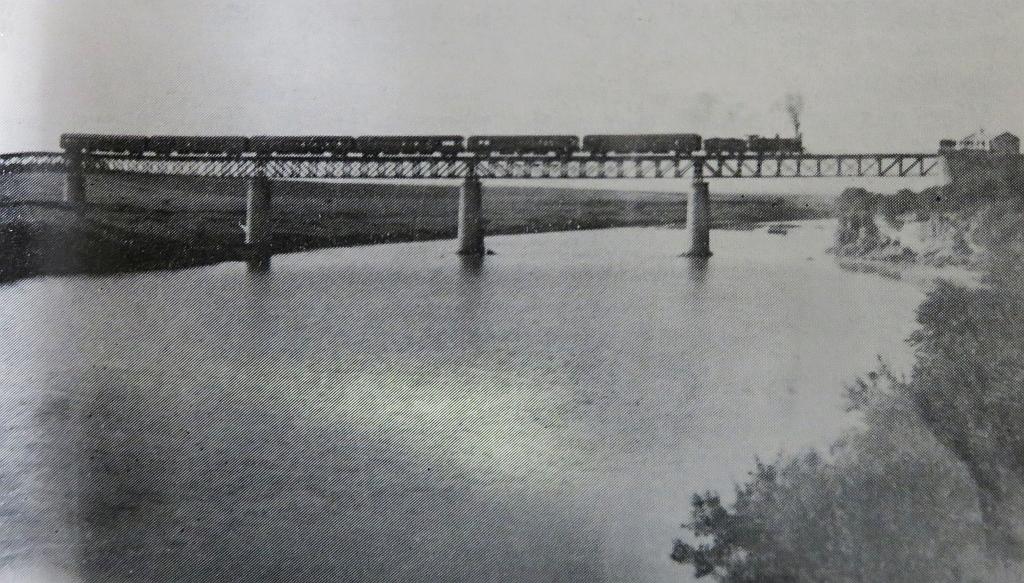 The train crossing the bridge in the picture above was the funeral train of Paul Krüger, the former president of the ZAR. He died in 1904 in Switzerland and his remains were taken to Pretoria.

The bridge served the railway for many years until it was replaced by a new bridge taking a double rail (I'll mention this later).

One span of the bridge was blown into the water by the retreating Boer forces in May 1900 to hinder the advancement of the British. The Royal Engineers quickly went to work, first laying a new track using the rail-bed laid for the earlier temporary bridge and then crossing the Vaal on a bridge made from steel and timber (whatever they could find). The main bridge was repaired using the first span on the Free State side, moving it out to the gap and placing it on the pillars. The span in the river was pulled out and after some repairs placed in the gap. That was a less difficult task since this was on dry land. Nevertheless on the whole this was a significant achievement in rigging and engineering with limited resources.

Damaged bridge over the Vaal during the South African War - Technorama Museum Vereeniging.JPG 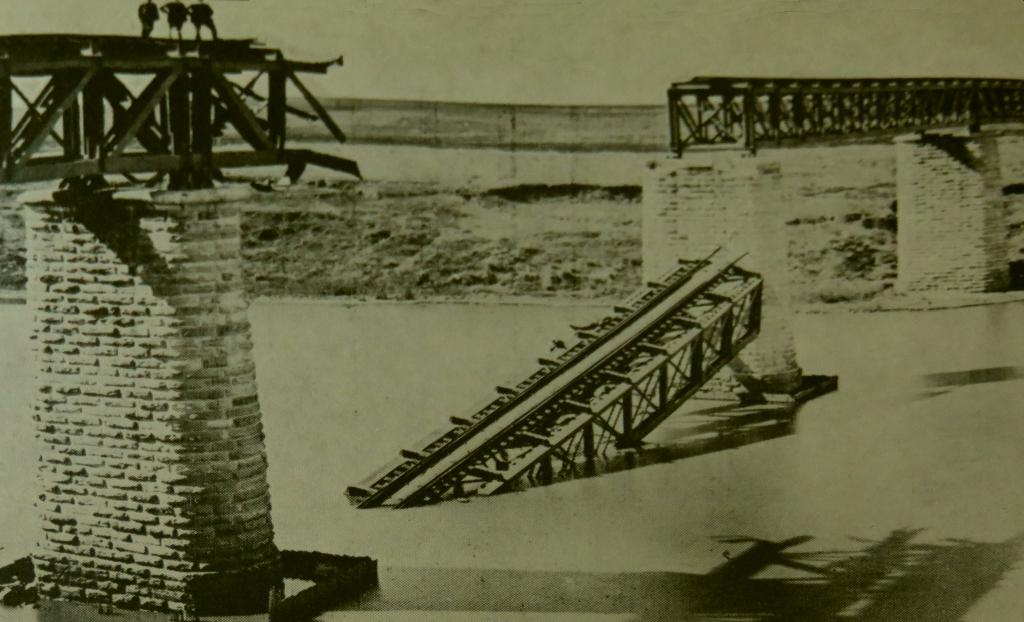 With time, the bridge started to show signs of wear and tear probably caused by the heavier loads, that is larger and heavier locomotives and more and heavier wagons, rolling over. At one time the bridge was declared unsafe and trains had to slow down to 10 miles an hour. One of the remedial actions was to encase the pillars in reinforced concrete. This is why the pillars don't show the sandstone blocks that they had been constructed from. The bridge was disassembled, but not the pillars which are now in use to carry a large diameter water pipe over the river.

Pillars of the old rail bridge over the Vaal - Horst Muller.jpg 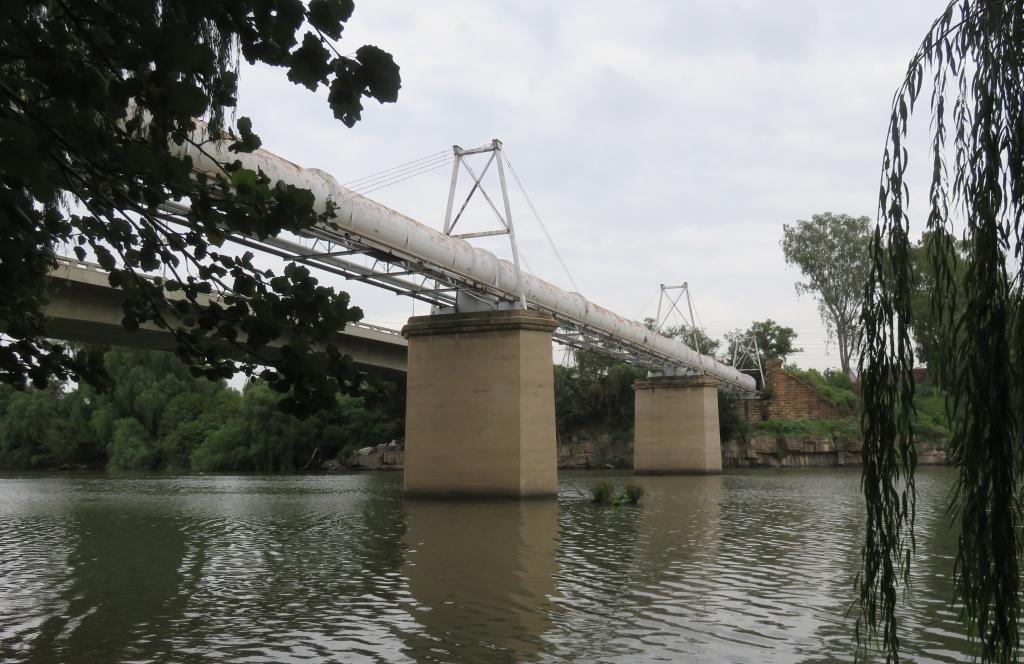 The next bridge worth mentioning is the wagon bridge. It was built in 1921 by the Union government as part of the government's effort to improve transport routes in the country. This thus replaced the drift and the pond.

Wagon bridge across the Vaal in 2003 - Horst Muller.jpg 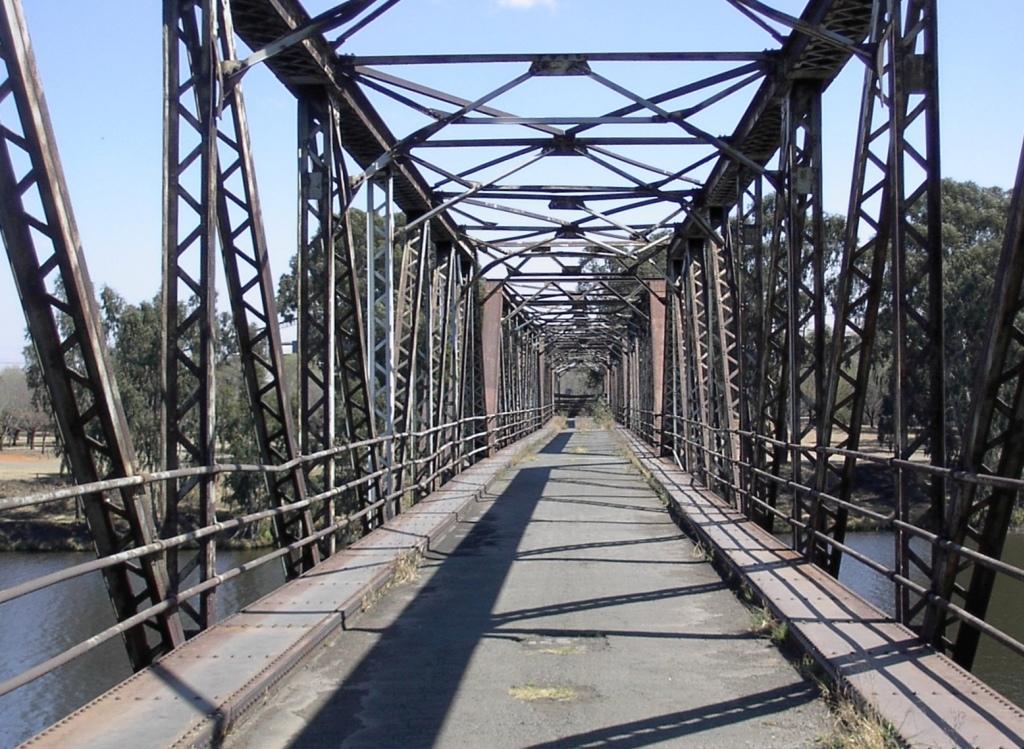 It was/is a steel construction of 5 spans with a single lane. I still remember the robot that was there to regulate the traffic. The bridge is not in use and is being stripped of all removable steel parts. The picture above, taken in 2003, shows the bridge when it still had the handrails on the side. Unfortuantely, these are all gone now. Only load-bearing elements remain and these will be next.

Because of the weakening structure of the original rail bridge and a decision to double up the line from Bloemfontein to Johannesburg, the railway administration decided to build a new rail bridge. The new bridge, about 1.5km downstream from the old rail bridge, was opened on the 5 July 1955. The cost was 250 000 pounds. The routing of the line changed somewhat, as can be seen on the extract from the topographic map of 1954 reproduced below. The new track branched off at the Richmond village, going north over the river and coming into the Vereeniging station from the south-west.  Part of the project was also a new station and station building. 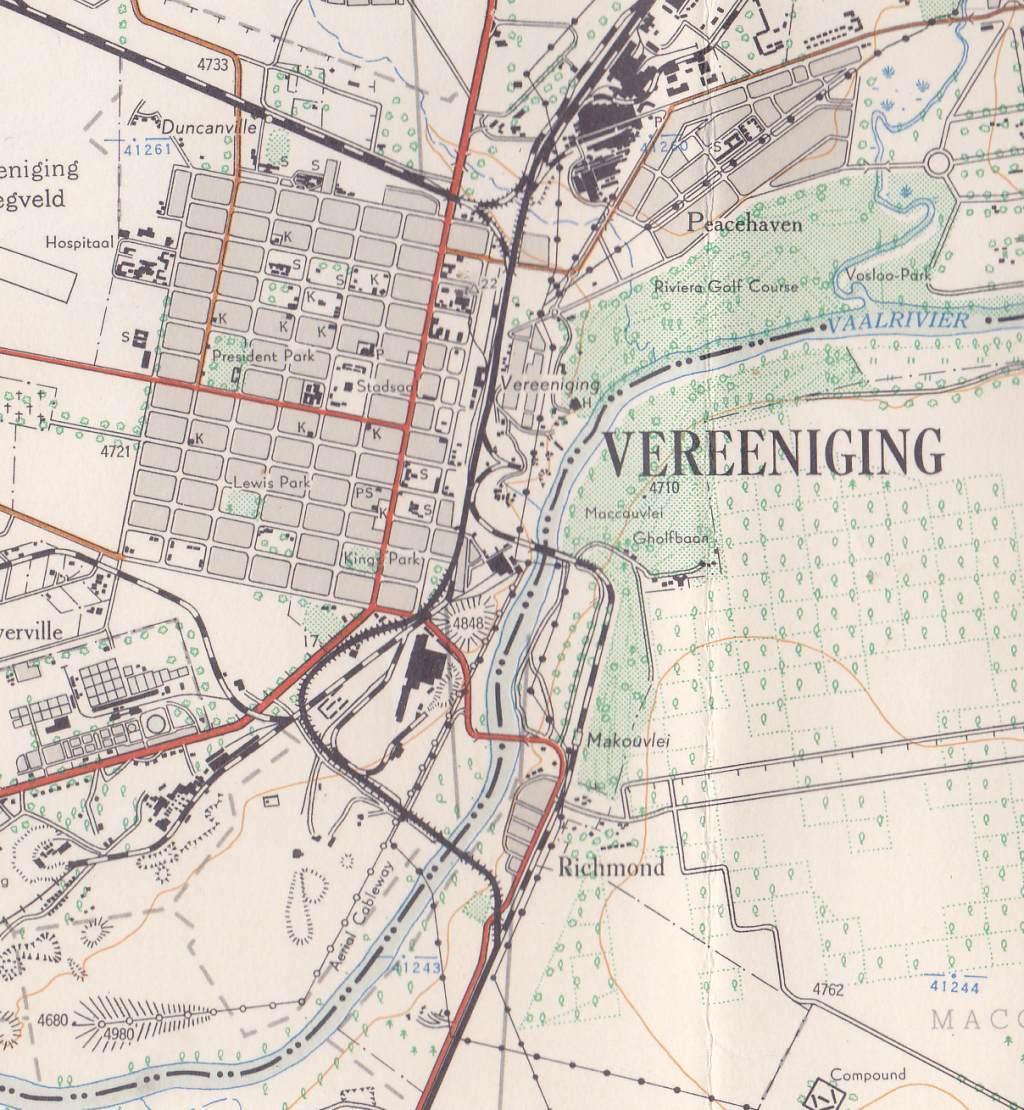 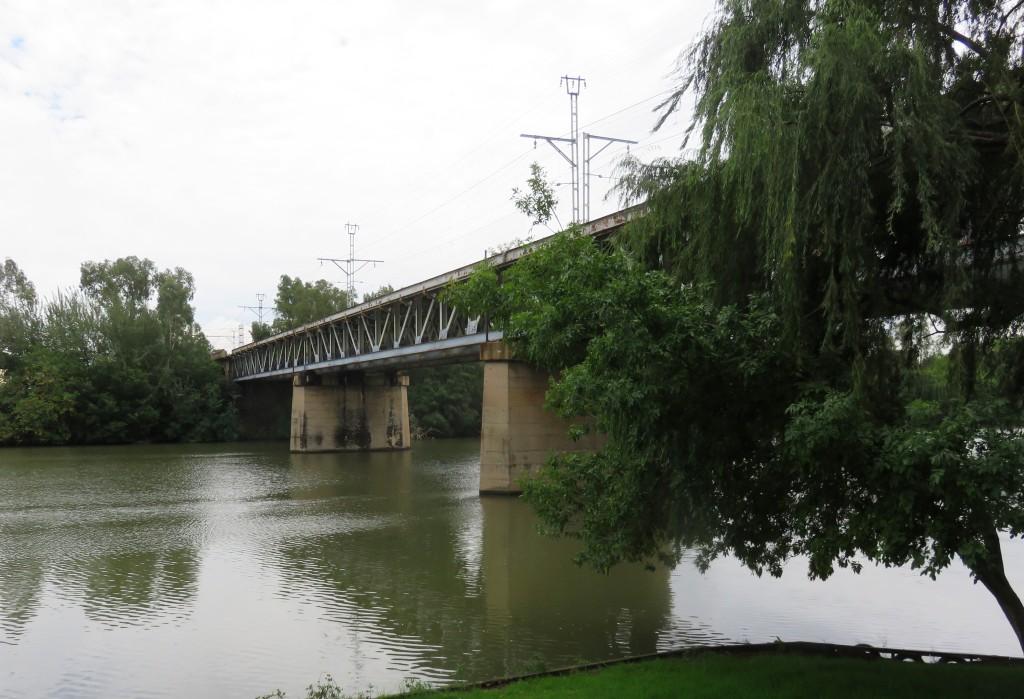 To erect the bridge the "end launch" system was used. The spans were assembled on the side of the river and then pushed over onto the pillars on rollers with hand cranks to move it.

Unfortunately, this bridge has suffered at the hands of scrap collectors. The walkway alongside the bridge has nearly been completely removed.

Other bridges followed. As they are much newer, I will just mention them without giving full details. They are all road bridges.

Ref 2: The Vaal River Bridge and Vereeniging 1892-1992, a brochure published most likely by the Technorama museum.