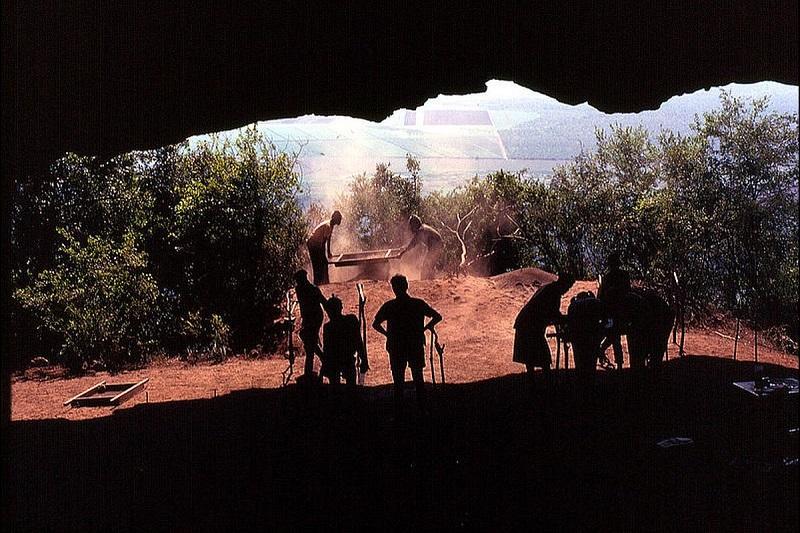 In the article below, journalist Lucille Davie delves into the history and significance of Border Cave. The article was first published on the Media Club South Africa website on 7 March 2013. Click here to view more of Davie's work.

The Border Cave offers a spectacular view 800m down into the plains of Swaziland which is enough to sweep you down if you don’t have the head for it. But that’s not the best reason to visit the cave.

Border Cave is a rock shelter on the cliff face of the Lebombo Mountains in the far north-east of KwaZulu-Natal, on the border with Swaziland.

The cave is remarkable because it reveals a continuous record of occupation for 120 000 years. Among the fossils found in the cave is an almost complete skeleton of a child, dating back almost 82 000 years, but also the remains of five adult hominins in excess of 66 000 years.

A question that has concerned scientists for some time has been when human cultures similar to ours emerged. Until the Border Cave findings were made, archaeologists believed that the oldest evidence of Bushmen hunter-gatherer culture in southern Africa dated back 20 000 years ago.

Of significance is the fact that the child was buried in a ritual way, covered in ochre. Although the exact meaning of the ochre is not known, it indicates that 82 000 years ago humans were engaging in symbolic cultural practices.

The findings also reveal that 44 000 years ago the inhabitants of the cave were using digging sticks weighted with perforated stones, they wore ostrich egg and marine shell beads, and used notched bones for notational purposes. In addition, they shaped bone points for use as awls (pointed bones for leather working) and poisoned arrowheads, just as modern Bushmen do today.

One of the arrowheads is decorated with a spiral groove filled with red ochre, to enable them to identify which arrowhead was theirs. A mixture of beeswax, tree resin, and possibly egg, wrapped in vegetable fibres, may have been used for hafting (attaching bone points or stone tools to the shaft). A wooden poison applicator retains residues of ricinoleic acid, derived from poisonous castor beans.

This research was conducted by an international team which included Wits University researchers Lucinda Backwell and Marion Bamford, and led by Francesco d’Errico of the University of Bordeaux in France.

“The findings at Border Cave show the oldest human behaviour as we know it,” says Backwell, from the Bernard Price Institute for Palaeontological Research.

Whereas other finds, like shell beads and stone tools at Blombos Cave and Still Bay, are almost as old, going back 75 000 years, it is not yet known what they were used for.

Backwell was involved in research in 2012 on organic material found at the site, in particular bone arrow heads, ostrich eggshell beads, engraved bones, bored stones, and digging sticks. These artefacts belonged to people who lived in the area, and many of the items are still largely used by Bushmen who live in Botswana and Namibia where they live a traditional lifestyle, hunting and gathering, with their language intact.

These artefacts also reveal the shift from the Middle Stone Age to the beginning of the Later Stone Age in South Africa, dating from around 56 000 years, a process that began by “internal evolution”. This shift involved the disappearance of stone spear points in favour of the bow and arrow, and new forms of personal ornaments and gathering equipment.

The cave is several kilometres from the small town of Igwavuma. It is reached by a rough dirt road and is some 100m below the mountain top, with a 800m drop into Swaziland. The cave is in a semi-circular shape, of some 40m across and about 15m deep.

Border Cave - MADe via Wiki Commons.jpg 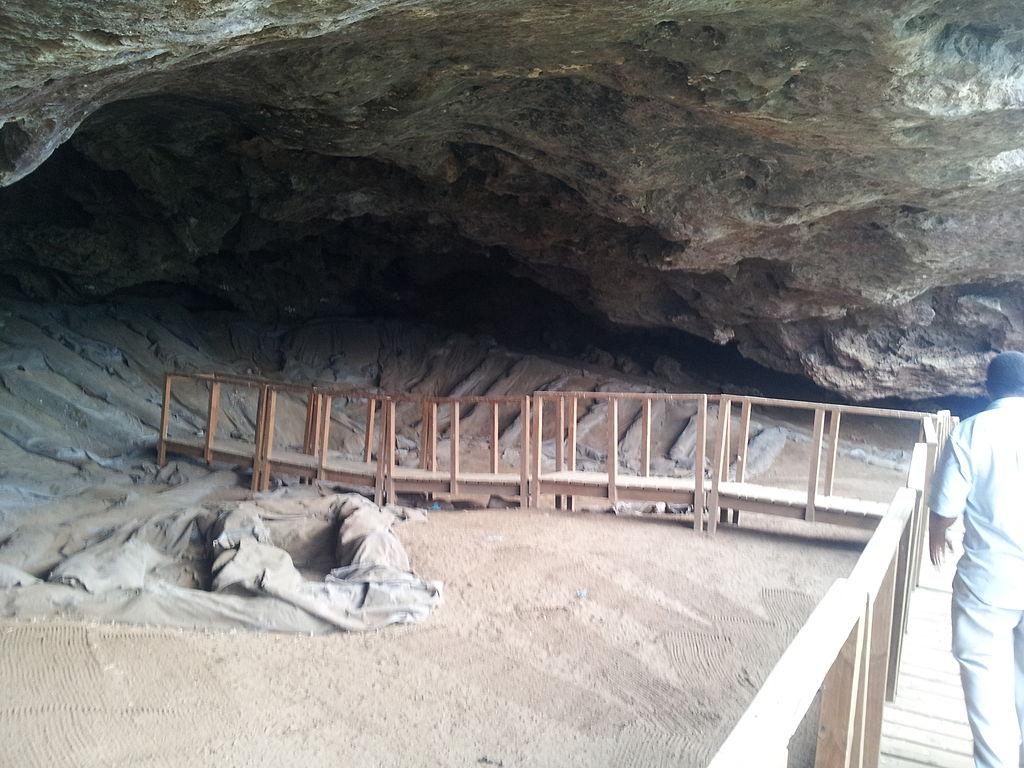 Inside Border Cave (MADe via Wiki Commons)

The cave was discovered in 1940 when WE Barton came from Swaziland to collect bat guano to use as fertilizer. The excavations revealed several human bone fragments, which were examined by renowned paleoanthropologist professor Raymond Dart. He had originally visited the cave in mid-1934 but a superficial examination revealed nothing.

In 1941 and ’42 a team sponsored by Wits University conducted a more thorough survey. Then again in the 1970s researcher Peter Beaumont of the McGregor Museum in Kimberley uncovered rich rewards - besides the infant and five hominins, more than 69 000 artefacts, and the remains of more than 43 mammal species, three of which are extinct, were recovered.

Also uncovered was the Lebombo Bone, the oldest known artefact containing a counting system, dating to 39 000 years ago. It is a small piece of baboon fibula incised with 29 notches, believed to be similar to the calendar sticks used by modern Bushmen.

It is generally accepted that by 60 000 years ago all people in southern Africa were anatomically modern, but this is based only on a scant fossil record of human remains from four sites - Klasies River in the Eastern Cape, Border Cave, and Die Kelders Cave 1 in the Western Cape, and to a lesser extent on the identification of modern features in human remains from Ethiopia, such as Herto.

They indicate that the initial divergence of African populations was followed by expansion and local and inter-regional migration.

“These processes have contributed to the genetic make-up of contemporary South Africans. The implications of DNA studies are that everyone in the world today can trace their ancestry back to an African origin,” write HJ Deacon & Janette Deacon in Human Beginnings in South Africa, uncovering the secrets of the Stone Age.

The child skeleton is stored in the Wits Medical School archives in Johannesburg. The other Border Cave artefacts are stored at the McGregor Museum in Kimberley in the Northern Cape.