NZASM Structures of the Rand Tram 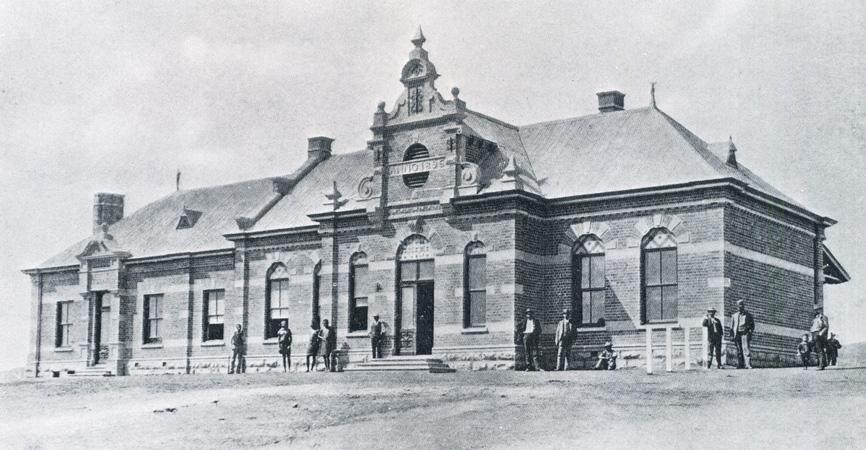 Robert De Jong is one of the foremost experts on the Nederlansche Zuid-Afrikaansche Spoorweg-Maatschappij (NZASM), a Dutch company responsible for the construction and administration of many early Transvaal railway lines. The following article, which looks at various structures associated with the Rand Tram, appeared in a number of publications in the late 1980s. In the introduction (not published below) De Jong expressed hope that the article would stimulate an interest in railway architecture which 'has been, like mining architecture, up to now a relatively neglected field of research in South Africa.'. Two and a half decades later we share these sentiments.

The Uitlander population on the Witwatersrand got their railway before the Government was able to run any train to Delagoa Bay. In the end this line, started as a humble transport arrangement for coal to the 'diggings', was to carry the heaviest rail traffic in the ZAR. The Rand Tram proved to be the first and one of the most successful exercises of railway construction in the Transvaal. And had not the abortive Jameson Raid influenced events during the years 1896-1899, the central station, Park Station at Johannesburg, would have boasted one of the finest railway buildings in all of South Africa. 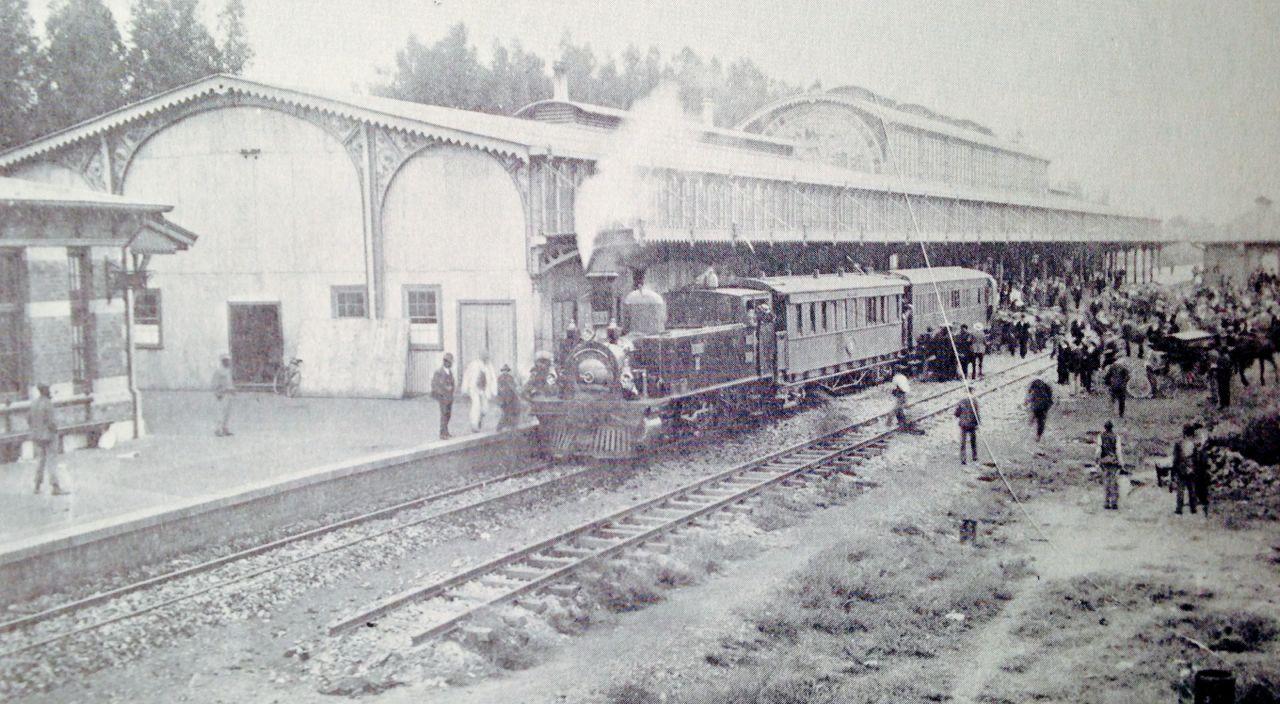 At the time when the Witwatersrand started its meteoric development, following the discovery of gold in 1886, an industrial infrastructure was totally absent in the Transvaal with its agrarian population. It soon became clear that the slow transport waggons could not fulfil the demands made by the growing mining camps and the increasing number of mines which needed heavy construction materials and coal. As a source of energy, coal was of crucial importance to the mines. Since 1886 coal had been found at Boksburg, but a quick and efficient method was still needed to transport it to the mines.

In 1888 the Volksraad finally reacted to several petitions to provide a railway on the gold fields. A concession was granted for the construction and the operation of a 'tramway' from Boksburg to Johannesburg. In effect, this transport link was more of a light railway than a tramway in the real sense, as the standard South African railway gauge of 3 feet 6 inches (1065mm) was adhered to. However, in order to cut costs and facilitate rapid construction, light-weight sleepers and rails and small-sized rolling stock were used.

The Government entered into a contract with the NZASM for this so-called ""Rand Tram"" on 20 July 1888. The NZASM was keen to prove that the Dutch were able to build and operate a railway in South Africa as well as the British. Work started in January 1889, and in March 1890 the Boksburg-Johannesburg connection was opened for traffic.

Due to the discovery, shortly afterwards, of gold on the West Rand and coal on the East Rand, it was decided during June-August 1889 to extend the Rand Tram westward to Krugersdorp and eastward to a coal-mine at Springs which the NZASM intended to work. Eventually, the Boksburg-Springs section became operational in October 1890, followed by the Johannesburg-Roodepoort-Krugersdorp extension in February 1891.

The different sections of the Rand Tram in terms of earthworks, masonry, ballasting and track-laying, were built by various contractors. Other contractors were responsible for the erection of the necessary buildings.

Meanwhile, development on the Witwatersrand had continued, especially around Johannesburg. In 1892 the NZASM decided to adapt the Rand Tram for heavy traffic, commencing with the laying of standard track. The expansion of the Rand Tram's station yards, the doubling and even tripling of certain line sections, the enlarging of passenger and goods platforms, the construction of new station buildings, sheds, offices, houses etc. was an ongoing process which tried to keep up with continued economic growth. By 1900 the Rand Tram was the busiest railway line in the Transvaal, and the Johannesburg-Elandsfontein (Germiston) section carried the heaviest traffic. Although technically it was part of the Rand Tram line, since 1892 this section was operated as a portion of the important Southern Line between Pretoria and Vereeniging which ran via Elandsfontein.

The early Rand Tram station buildings were all of the corrugated iron variety, being of a more or less standard design similar to the other NZASM types found at stations where trains coming from opposite directions had to pass each other. Some of these survived until 1900, and even after the Anglo-Boer War during the era of the CSAR. Busy and important stations like Krugersdorp, Roodepoort, Florida, Johannesburg Park, Elandsfontein and Springs were, however, provided with larger brick or iron buildings, especially after 1895, while erstwhile halts were upgraded to stations with the standard corrugated iron structures.

Only two station buildings of the Rand Tram have survived the old Krugersdorp station and the remnants of the old Park Station. The original Krugersdorp station building was a standard corrugated iron structure with a hipped roof and verandah. In July 1895 construction of the South-Western Line to Klerksdorp commenced at Krugersdorp, and simultaneously work started on the erection of a much larger and sophisticated building. The old one would have been inadequate for a station like Krugersdorp, being the terminus of two railway lines, namely the Rand Tram and the Klerksdorp line.

The new station building, completed in 1896, was erected by the well-known building contractor M.C.A. Meischke. It stood isolated on higher ground south-east of the town, close to the mining area, and was built according to NZASM designs. Originally the red brick structure was decorated with stonework in the form of two horizontal bands, cornices and 'voussoirs' at window and door arches. The most striking feature is the imposing Neo Dutch Renaissance gable forming part of the former street facade, situated above the main entrance. The platform side had no gable, only a lean-to canopy. After 1900 the building was extended lengthwise, and all exterior wall surfaces, sadly though, were plastered and painted, with the result that the edifice lost much of its character.

Krugersdorp's station building is one of the architectural gems the NZASM left behind. Fortunately, having been proclaimed a National Monument, it is preserved for posterity. 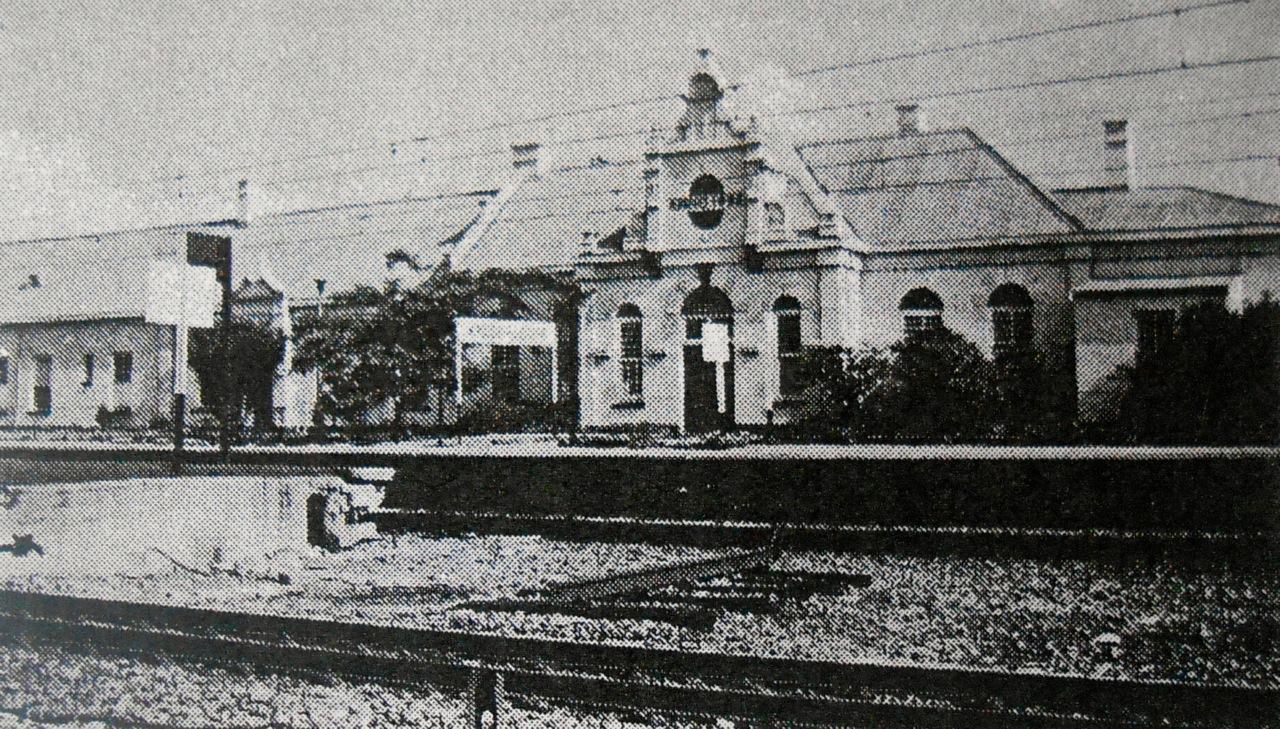 There were three stations close to the centre of Johannesburg: one for goods, called Kazerne, and two for passengers, viz. Johannesburg (or Braamfontein) and Park. The Park Station rapidly became the more important passenger station, largely because of its proximity to the city centre on Noord Street and connected by Rissik Street. During the early 1890s the collection of modest iron buildings contrasted sharply with the growing number of imposing edifices dotting the Johannesburg skyline. The NZASM soon saw the need for a large and prestigious Park station building, which would reflect through its style, size and furnishings, Johannesburg's status as South Africa's financial centre. As the design of such a grand building was beyond the capabilities of the NZASM drawing-office, it was decided in 1894 to commission the Amsterdam architect Jacob F. Klinkhamer, experienced in Dutch railway architecture, to draw up plans for the new building.

Fortunately the beautiful drawings by Klinkhamer are preserved. The final design made provision for a frontal or main building between the station platforms and Noord Street, covering some 1200 square metres and housing a concourse, luggage and customs offices, station-master's house, ticker offices and buildings providing additional facilities. This edifice would have hidden an insular platform of 21 x 350m, with an arched roof section 155m long. Partially situated beneath this roof would be a series of separate wooden and brick buildings such as offices, toilets, waiting rooms, restaurant, bar, kitchen, telegraph office and store-room.

The style of Klinkhamer's design is Neo Dutch Renaissance, which is reminiscent of the Amsterdam Central Station.

Due to cuts in expenditure and the political unrest prior to the Anglo-Boer War in 1899, only the insular platform with its roof and buildings was erected. They were completed in May 1897. Contrary to what has often been supposed, the roofed section has never served as an exhibition hall, but was purpose-designed by Klinkhamer and manufactured by the Pletterij Den Haag in the Netherlands.

Park Station's insular platform continued to serve Johannesburg even when a grand new station building was completed during the early 1930s. When this platform had to make way for the city's massive new complex, the entire 1897 platform roof was dismantled and re-erected on the grounds of the Railway College at Esselen Park. Housing miniature train sets, the structure is being used for training station foremen. [It has since been moved to a patch of land just south of the railway lines in Newtown. 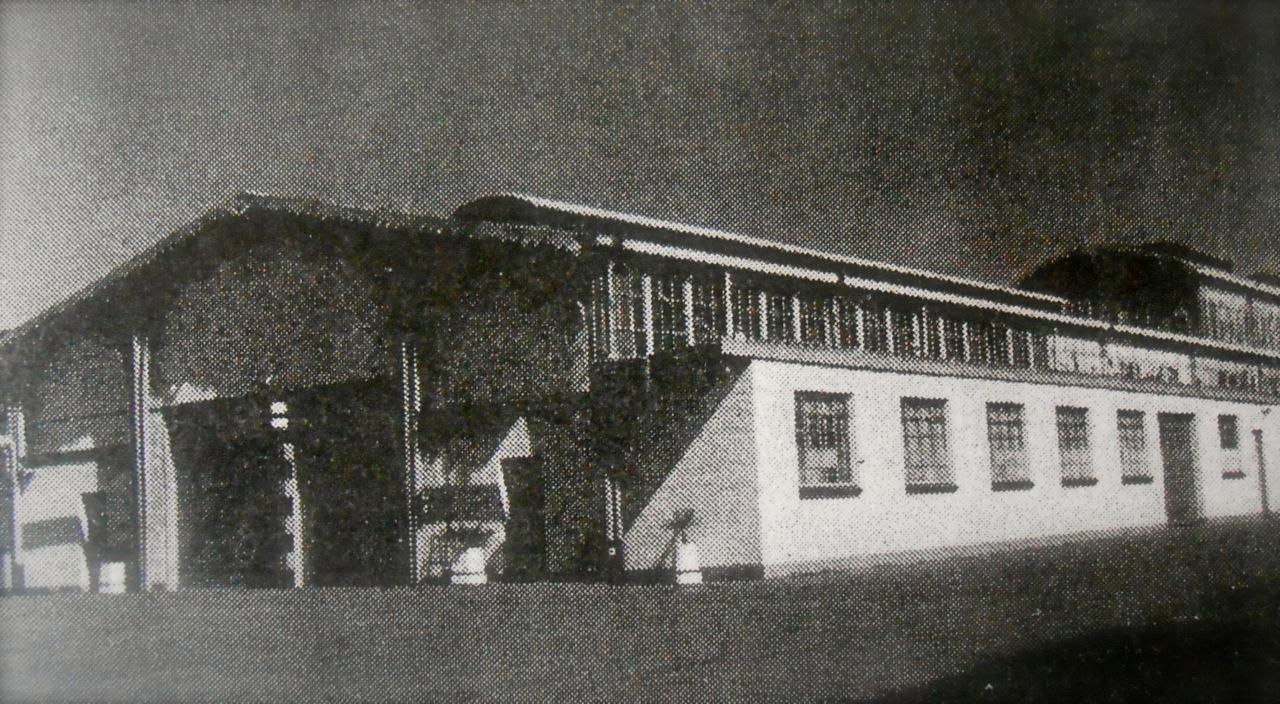 A great number of brick and corrugated iron houses for NZASM employees were built all along the Rand Tram. Most of them were concentrated at the more important stations like Elandsfontein, Johannesburg (Braamfontein) and Krugersdorp. Springs also had its fair share of houses, because of the number of miners employed at the coal mine worked by the NZASM.

Very few of the Rand Tram houses have survived. The best examples are at Germiston in the form of three double cottages for unmarried officials. At Boksburg East Station there is a rather unusual quadruple cottage for unmarried staff. Like all other NZASM brick houses these structures probably were unplastered originally. The decorative stonework is a typical NZASM feature. At Krugersdorp Station there is a double cottage of the larger type, built by Meischke. 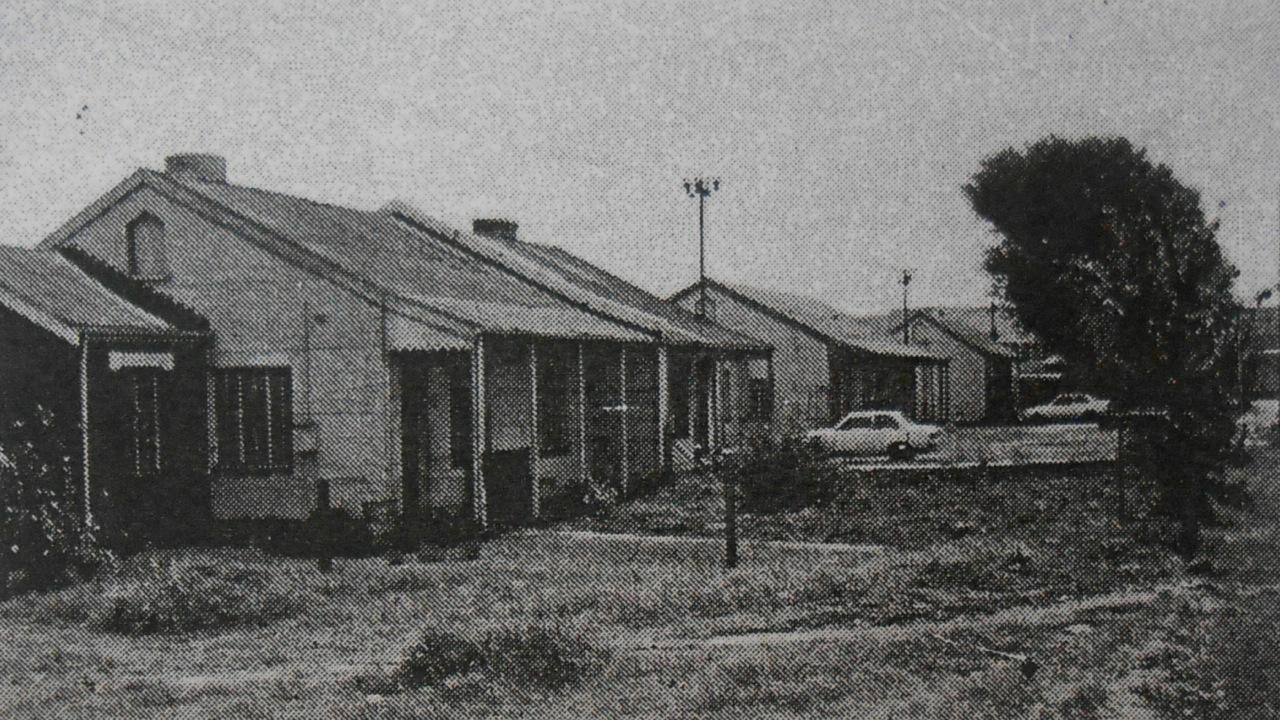 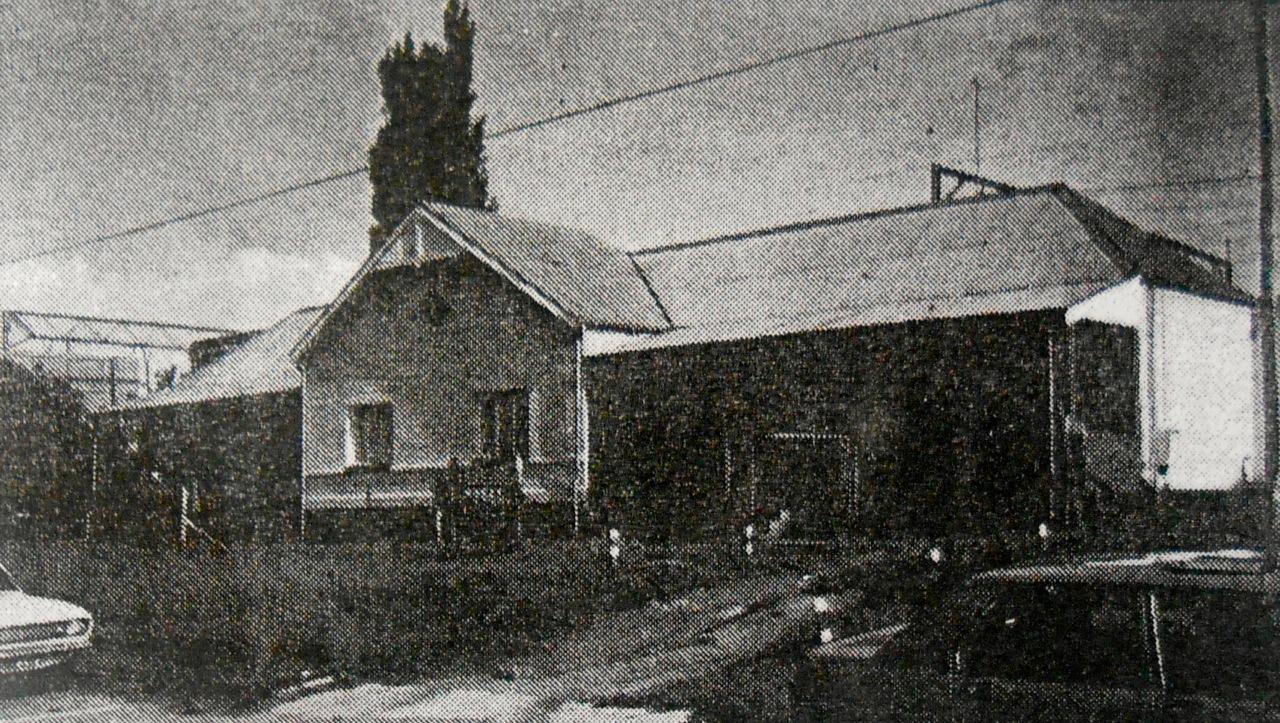 A number of brick office buildings were erected at Braamfontein, Kazerne, Elandsfontein and Springs. None have survived.

The more important stations had large, corrugated iron sheds for the storage of goods, while locomotives were housed in so-called roundhouses. Of these buildings none have remained.

Because of the even topography of the landscape the Rand Tram did not have any large bridges. The line was provided with numerous culverts for channelling water underneath and away from the embankment. In the vicinity of the stations Georgina, Industria and Geldenhuis a few good examples have remained, the rest having disappeared due to the constant doubling, tripling or even quadrupling of most sections, and the replacement of the relatively small sandstone culverts by larger concrete ones able to carry heavier traffic. Some culverts have survived because they formed part of curves which were left standing when the railway line was later straightened in places.

Compared to the Eastern or Delagoa Bay Railway and Barberton Branch line, and even the South-Eastern Line, not very much in the way of NZASM architecture has remained in connection with the Rand Tram. This can be attributed to the fact that the line was subject to continuous modernisation on account of the increase in frequency, weight and length of trains.