Hermanus Lombard and the death of Captain Elliot 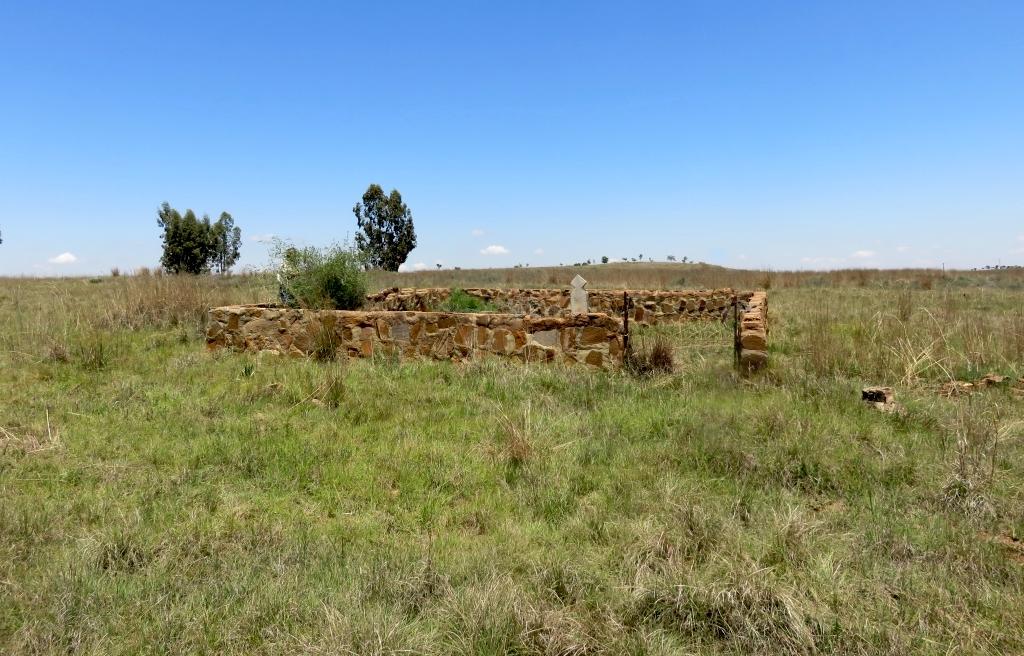 On the shores of the Vaal Dam, on the Free State side opposite Vaal Marina, is a small graveyard containing a few graves but only a single gravestone. This marks the grave of Hermanus Lombard.

The inscription on the gravestone in the image below has been enhanced to make it more readable. Translated into English it reads:

Who was Lombard and why am I writing an article about him? What follows is the story of an event that happened during the 1st Boer War that totally changed his life.

Things began at the Battle of Bronkhorstspruit on 20 December 1880. A regiment of British soldiers proceeding to Pretoria was blocked by Boer forces. An uneven battle ensued leading to the loss of many men. The only British officer not killed or wounded was Captain Elliot. He was taken prisoner with the remaining men and sent to Pretoria. At that time, a Captain Lambert was also captured while transferring horses from the Free State to Pretoria.

In Pretoria, the two officers were given a choice, either stay in prison until the end of the war or accept a pardon and leave the country with the promise not to participate further in any action against the Boer republic. They chose to leave the country and were provided with a cart and two horses as well as an escort of two Boers. The condition of the pardon also stipulated that they leave the republic on the shortest possible route.

They came through Heidelberg and took the wagon road to Frankfort. Arriving at a drift (we don't know which one) they found the river flowing very strongly and refused to cross. An offer to take them over by boat was rejected since that meant leaving their cart and horses behind. The escort gave up and left them at the drift.

Incident at the drift - The Star.jpg 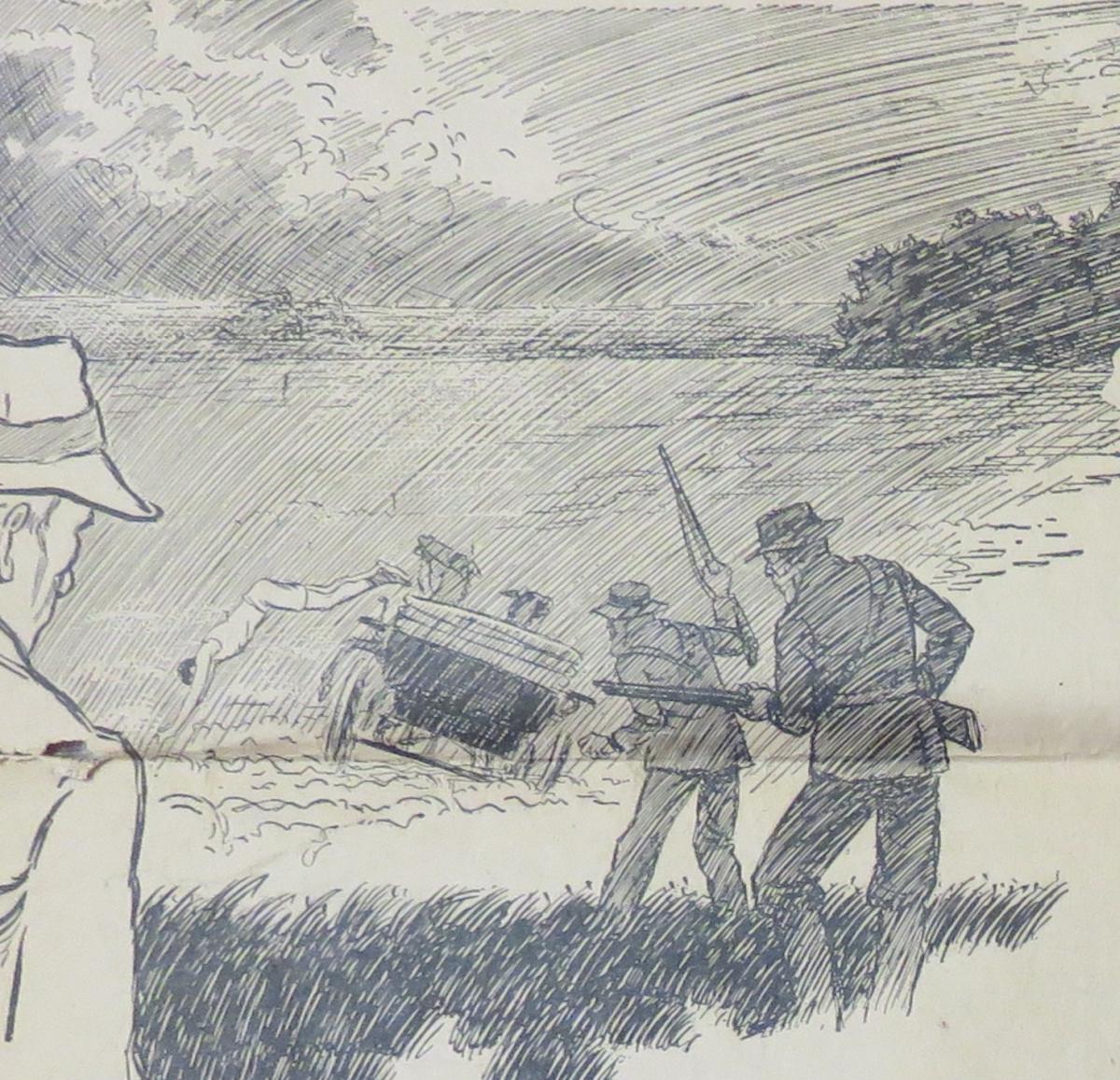 Pen-sketch of the incident at the drift (The Star)

They decided to search for another drift further upstream which took them across Lombard's farm at Koppiesfontein. This farm is on the north side of the Vaal Dam, where Vaal Marina is situated now. Hermanus gave them a meal and helped with some repairs to the cart. Before leaving they inquired about the route to Standerton.

A few days later they were noticed on the Molespruit and the commandant was notified. An escort was sent out to take them to the nearest drift and they were informed that the Kommandant-General Joubert was very disappointed that they had not stuck to the agreement. The escort took them back to Koppiesfontein where they had to wait for the commandant to arrive (commandant Nieuwenhuizen). He arrived at 18h00 and ordered them to proceed to the nearby Lies Drift.

Arriving just after sunset they were instructed to cross immediately. The flow was strong and the cart soon had problems getting stuck. Hermanus's suggestion that he could try to lead the horses over and swim back was not acceptable to the commandant. He instead ordered shots to be fired to scare the horses into action. Captain Elliot got shot through the back and died instantly while Captain Lambert managed to jump into the water and swim to the Free State side.

The body of captain Elliot and the cart were recovered the next day. He was buried next to the river, but was later exhumed and reburied in the Church Street cemetery in Pretoria. 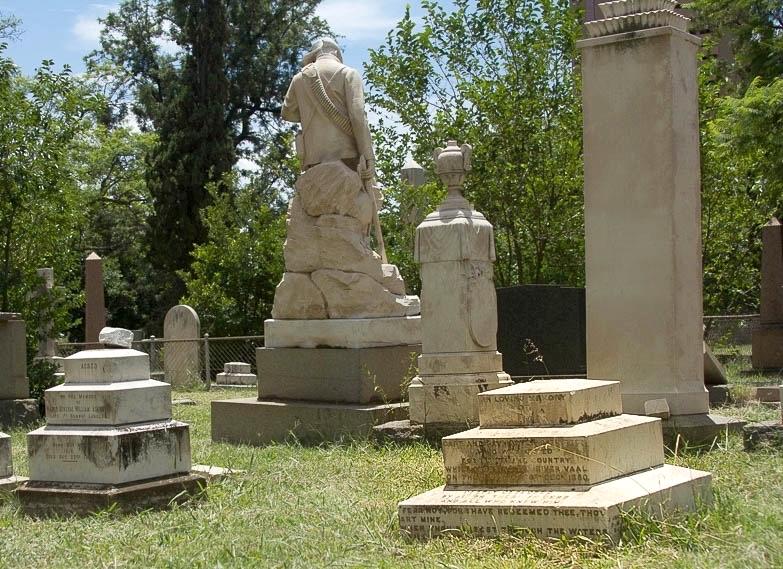 The inscription on his gravestone reads: In loving memory of; John Mitchell Elliot; Aged 37; Capt. and Paymaster 94th Rege; who was killed; for queen and country; while crossing the river Vaal; on the night of the 29th Dec 1880; deeply deplored by his brother officers; and all who knew him.

There had to be some repercussions and the subject came up at the peace conference. It was agreed that the members of the escort would appear in front of a British appointed judge. Seven of the eight appeared, but the eighth (Hermanus) refused to appear. At the inquiry, it wasn't established who fired the fatal shot, but it was suspicious that Lombard was not present. He was declared an outlaw.

Hermanus didn't wait for the outcome of the trial. He travelled to Mafikeng and from there into Bechuanaland. We can determine roughly the date when he left. His youngest son, Johannes Stefanus was born on the 9 April 1882. That points to a date of conception around the 15 July 1881 (266 days average pregnancy). The court case started on the 18 July 1881 and he left before the trial which puts his departure in the middle of July.

When he eventually returned is not known. In 1927 he was interviewed by Eugene Marais who wrote an article in The Star newspaper. Lombard also had a statement printed in English denying all guilt.

The event drastically changed Lombard's life. He was 44 when the incident occurred. Up until then he farmed on Koppiesfontein, was married and had children. He left everything behind to escape to the Kalahari in Bechuanaland where he made a living as a big game hunter. As well as getting involved, so it is told, in little wars among the natives as a hired gun. Otherwise very little is known about how he lived, how he survived and how he supported his family left behind at Koppiesfontein. There is no specific information on how long he stayed away. One note says he was gone for 40 years, which would put his return at about 1920.

Hermanus and his wife Jacoba Dorothea - original picture in the possession of Manie Lombard.jpg 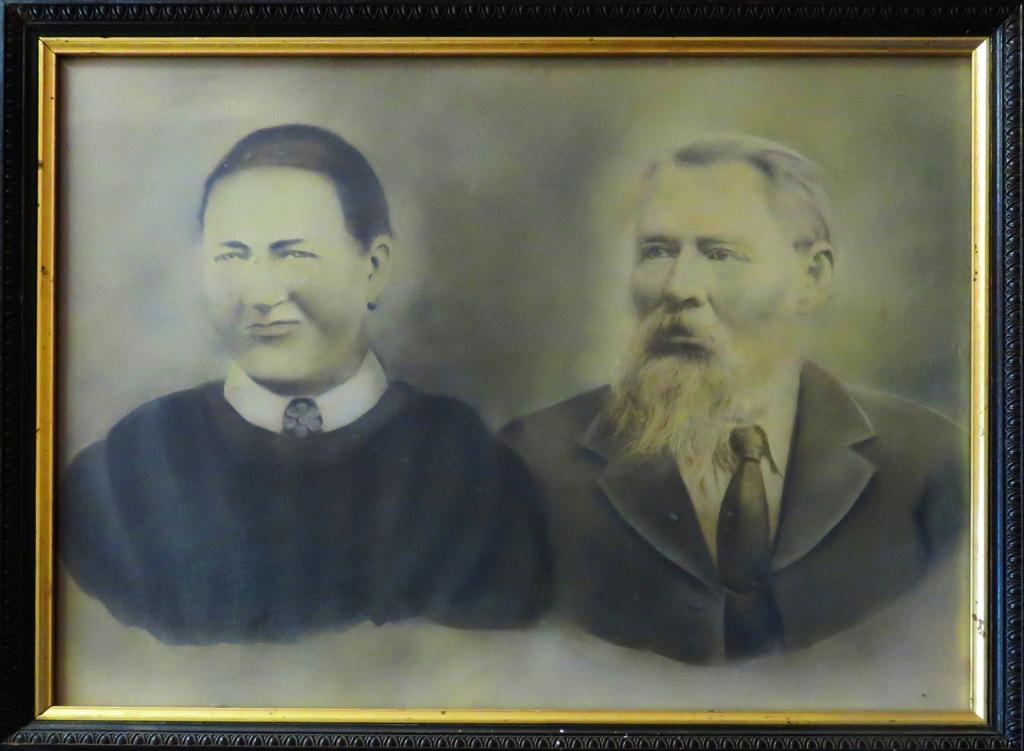 We have a few snippets of what Lombard's life was like before the event. From what he told Eugene Marais, he was known for his physical strength and was given the nickname Sterk Hermanus (Strong Hermanus). The field cornet often used to challenge the commando to beat him in wrestling. Nobody ever managed to throw him. As mentioned, he farmed at Koppiesfontein and was married to Jacoba Beatrix (Dorothea) Luis, born 1846. She was the daughter of Izak Daniel Luis. I have to assume here that he farmed on the Free State side of the drift where captain Elliot was shot.

Hermanus Lombard when interviewed by Eugene Marais in 1927 -The Star.jpg 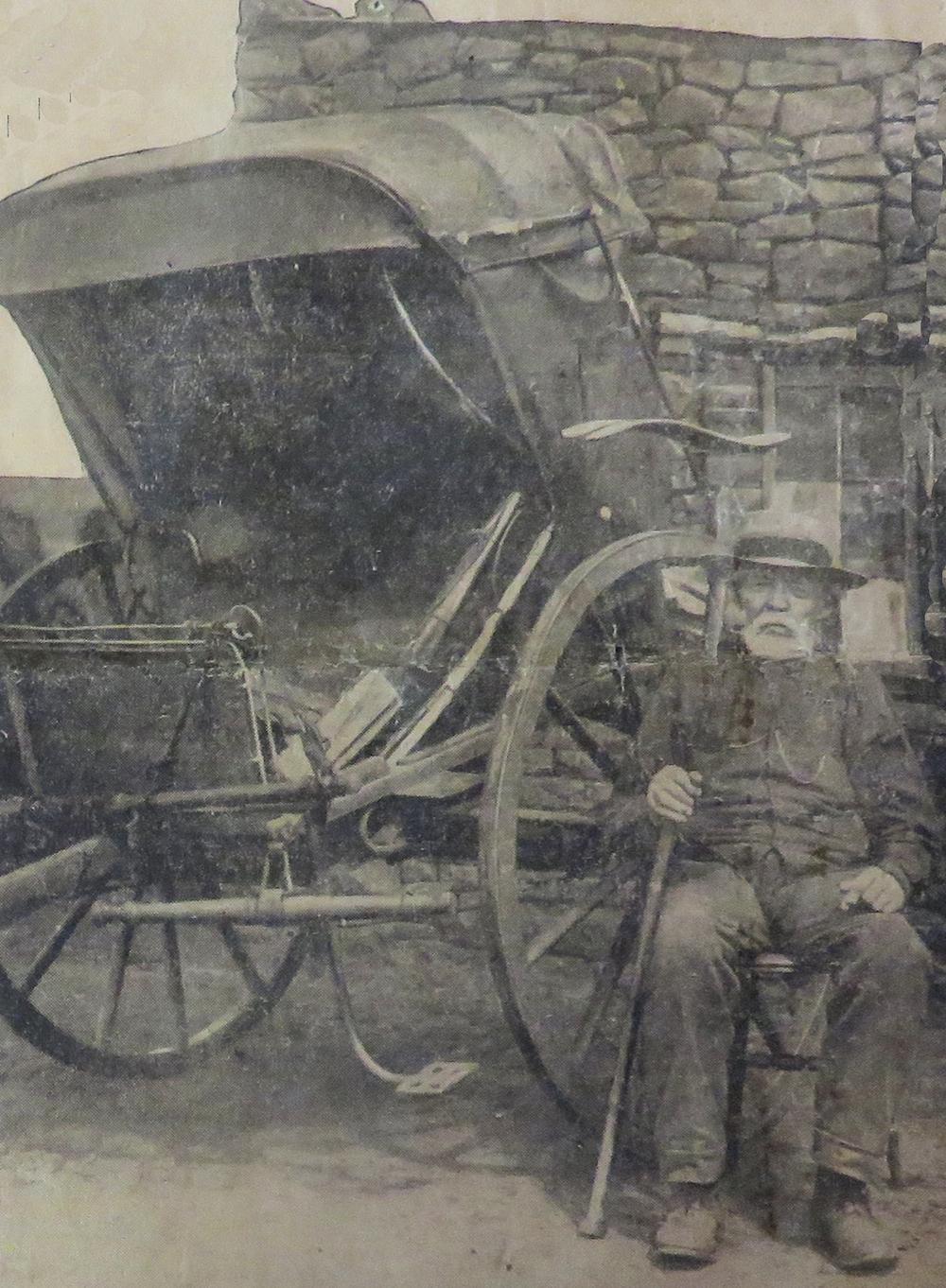 Hermanus when interviewed by Eugene Marais 1927 (The Star)

The 19 February 1927 article in The Star states that the incident happened at Lies Drift. A small map was included in the article showing the position of the drift downstream from the confluence of the Vaal and Wilge rivers. VE d'Assenville agrees with this position but I don't. On an 1879 Jeppe map, there is a drift marked at Koppiesfontein as Luuise's Drift, the name Lombard is given as the farmer's name on the Transvaal side. It is the only drift shown in the vicinity between Sand drift near Villiers and Lindequesdrift towards Parys. On an 1881 military map and an 1890 Jeppe map, the name is Luise's Drift and Luces Drift respectively. On the 1890 Jeppe map, a second drift is shown slightly to the west and it crosses near what is now the island, close to Aloe Fjord. This is the wagon road to Heilbron. The first drift is on the major wagon road to Frankfort. Thus my conclusion is that all these names are very similar and if spoken very quickly sound like Lies Drift.

There are two possibilities of how it got the name, Luise or similar. The one goes back to an event at the drift when a wedding party coming over from the Free State was washed away and drowned, including the bride. The bride's name could have been Louise or similar. The other is the family name of Hermanus's father-in-law, Luis. It also may explain why Hermanus's grave is on the Free State side of the drift, the farm most likely belonged to his father-in-law. And the unmarked grave next to him is most likely that of his wife. 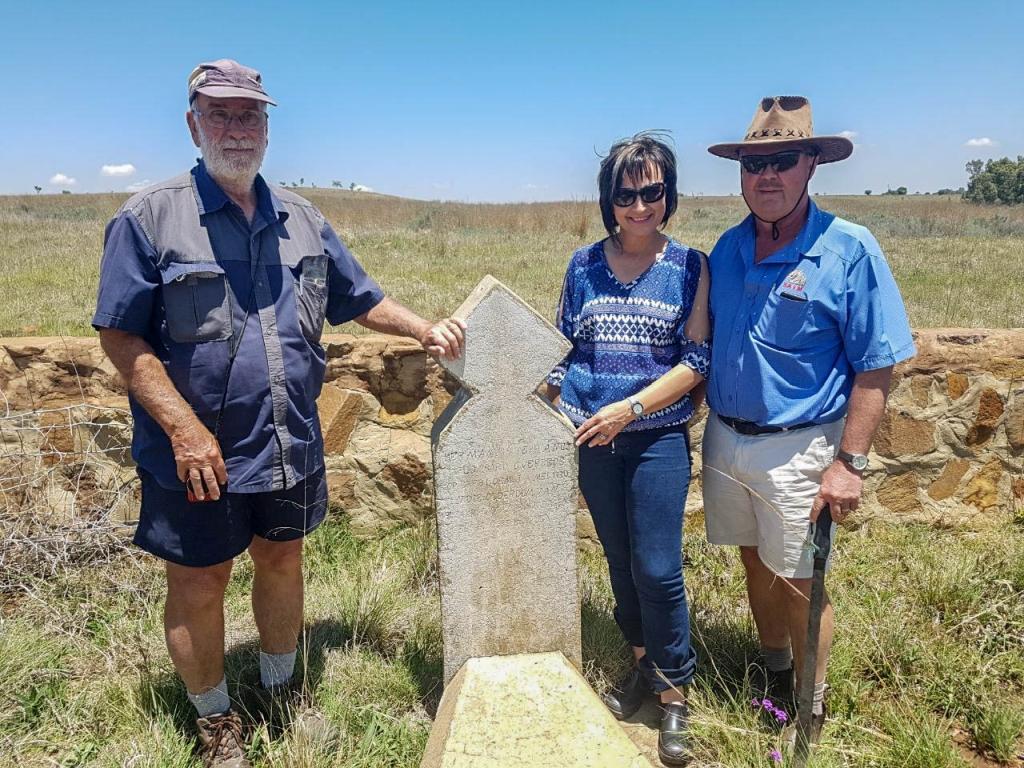 Manie Lombard, great-great grandson of Hermanus, and his wife Alta. The author of the article is on the left. (Piet Lombard)

Thank you to Piet Lombard and Manie Lombard for making the visit to the grave possible and for providing information and encouragement to write this article.