Car spotting at the Kruger National Park in the 1970s 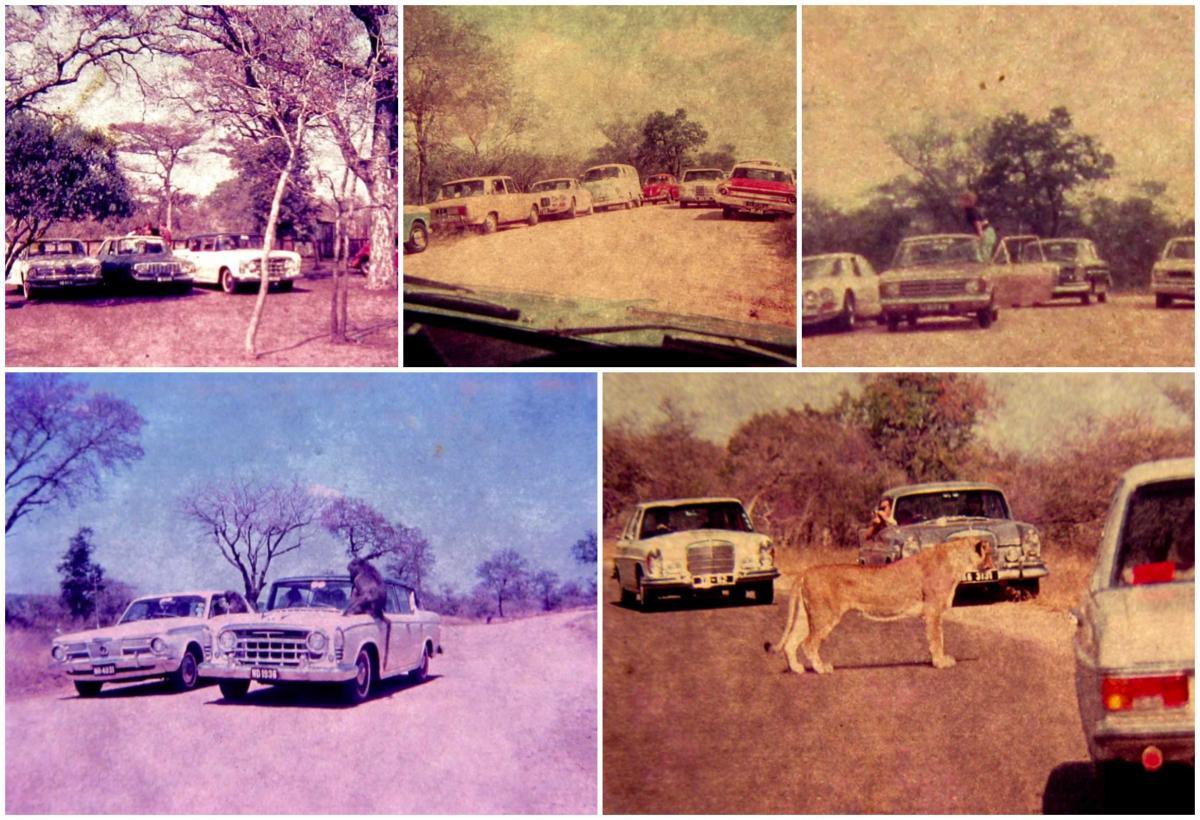 A friend of mine has given me access to thousands of slides taken by her late father-in-law, Denis James Strever, over fifty years ago. Many of the colour slides (Agfacolor) have changed colour towards purple and magenta because of their age and I’ve adjusted some of the photographs to sepia to enhance their appearance. Sandy Buchanan was invaluable in identifying the vehicles in the photographs.

In going through the photos of long ago Kruger Park trips in the 1970s, it became clear that when visiting the Kruger National Park in South Africa, even if you don’t see significant wildlife, one thing you are sure to see is cars. Those cars of the 70s represent a bygone age that is getting more ‘bygone’ as the decades pass, and these modern automobiles are just as glamorous as those shown by Carol Hardijzer in his 2018 article Snapshot Photography - Automobiles photographed in South Africa from the 1920s to 1960s (click here to view).

Many of the cars of the 1960s and 1970s are now highly collectible, especially in the USA, and buying one could set you back thousands of dollars if it is in good original condition.

On your trip to the famous Kruger National Park, you might have wanted to see wildlife or even just stare at nothing. Wherever you go, there will be people, picnics and cars. 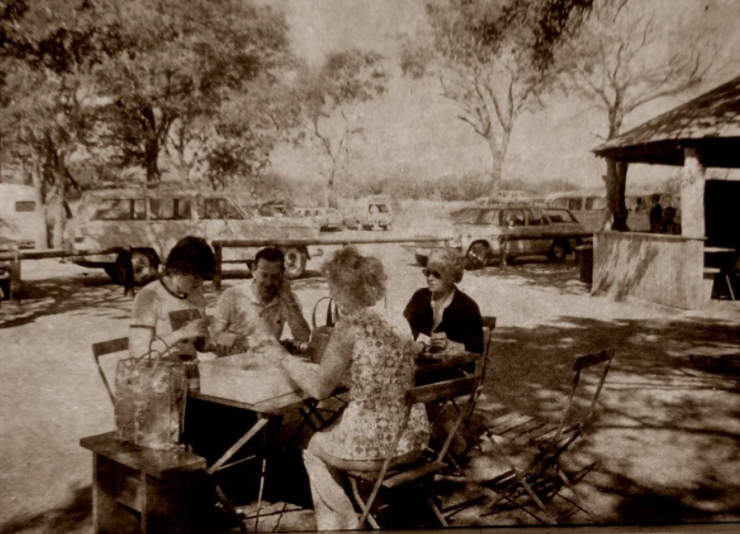 Behind the Bird - Cars in the Kruger Park Denis Strever 1978.png 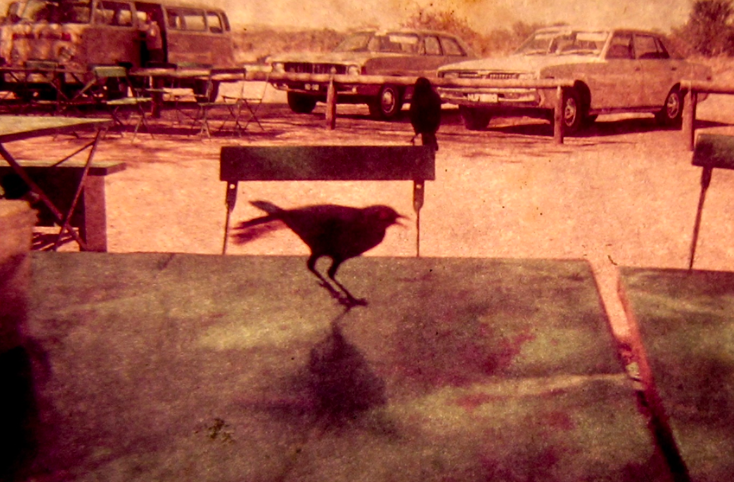 Even with bird watching there will be cars to view. Glossy Starlings with a background of cars. VW Kombi and a Chrysler Valiant on the left, and an early Datsun on the right. Vehicle ID by Sandy Buchanan. (Denis Strever, 1978)

You might have longed to experience the challenge of the open road and get away from the crowds. Whatever your plans, you are likely to end up in those Kruger Park traffic jams. 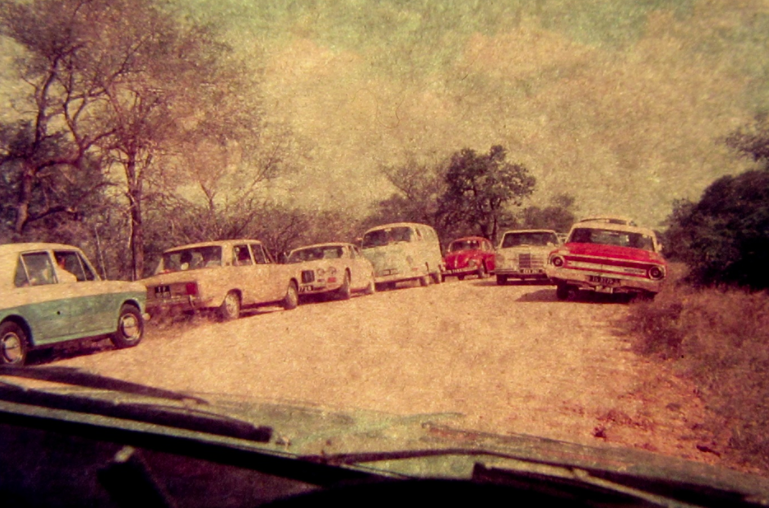 In the above photograph, from left to right, the cars are: an Austin 1100, a Fiat 124,  a Jaguar XJ 6, a Volkswagen Kombi, Volkswagen Beetle and a Mercedes-Benz 230E, with the taillights of a red Ford Galaxie. Vehicle ID by Sandy Buchanan. (Denis Strever, 1971)

Some of these cars, like the Ford Galaxie (1970) with its V8 engine, are very collectible now, and buying one in good condition could set you back big-time (no E--bay payments accepted, cash and collect only!).

The Ford Galaxie was a full-sized car that was built in the United States from 1959 through to 1974. The name was used for the top models in Ford's full-size range from 1958 until 1961 in a marketing attempt to appeal to the excitement surrounding the Space Race. For 1962, all full-size Fords wore the Galaxie badge, with "500" and "500/XL" denoting the higher series. The Galaxie 500/LTD was introduced for 1965 followed by the Galaxie 500 7-Litre for 1966. The Galaxie 500 prefix was dropped from the LTD in 1966, and from the XL in 1967, however the basic series structuring levels were maintained. The "regular" Galaxie 500 continued as Ford's mid-level full-size model from 1965 until its demise at the end of the 1974 model year (Wikipedia).

Example of a 1963 Ford Galaxie (Wikipedia) 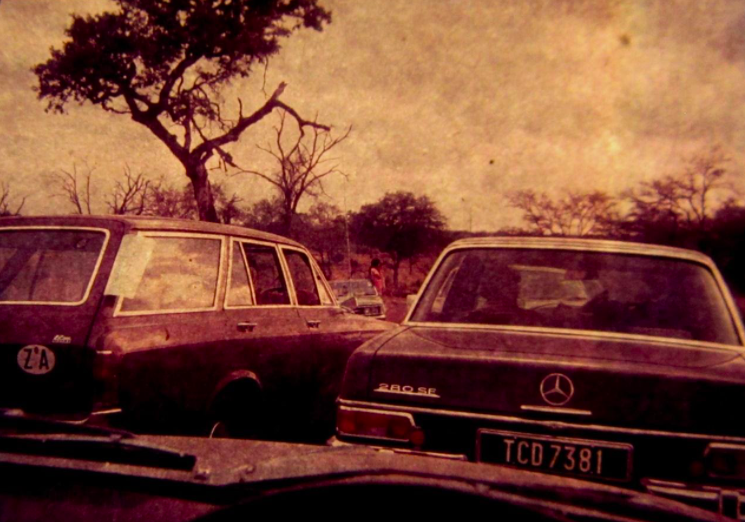 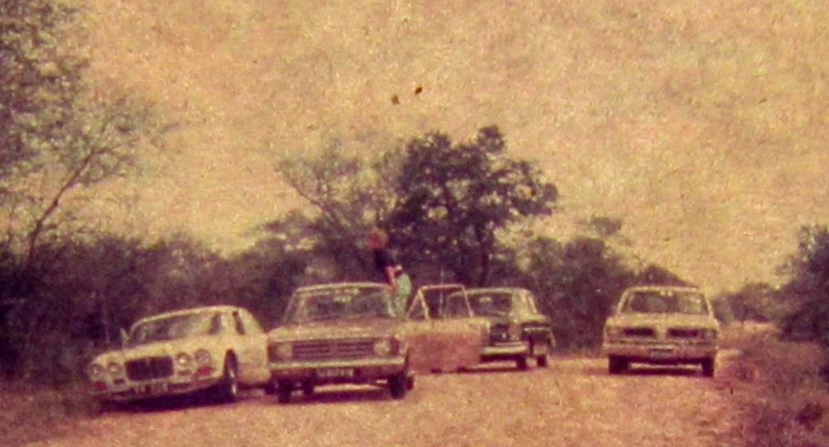 From left to Right: A Jaguar XJ6, a Ford Cortina, a Mercedes-Benz 230E and a Chrysler Valiant, all approximately 1960 models. Vehicle ID by Sandy Buchanan. (Denis Strever, 1971) 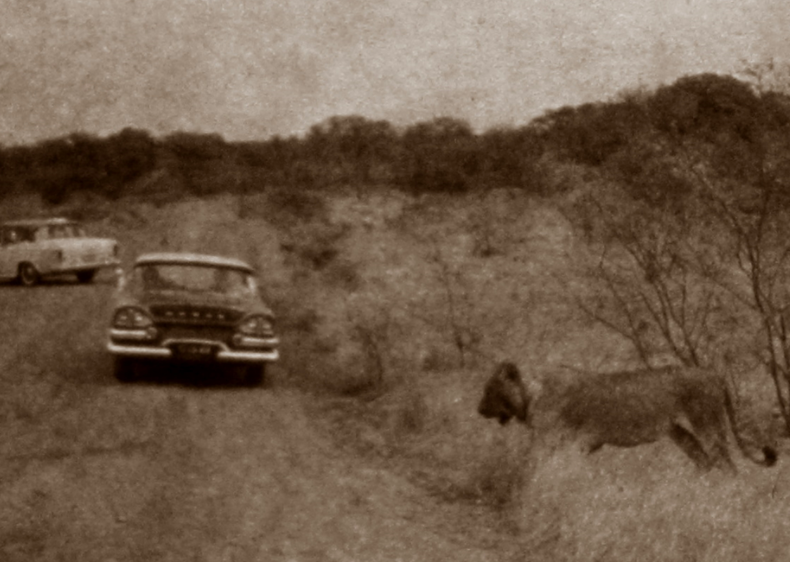 A photograph of a lion about to cross the road, with an interesting ‘Dodge’ car on the left. Dodge was a Chrysler Corporation product, with this one possibly from the 1960s. The Nash is in the background. (Denis Strever, 1971) 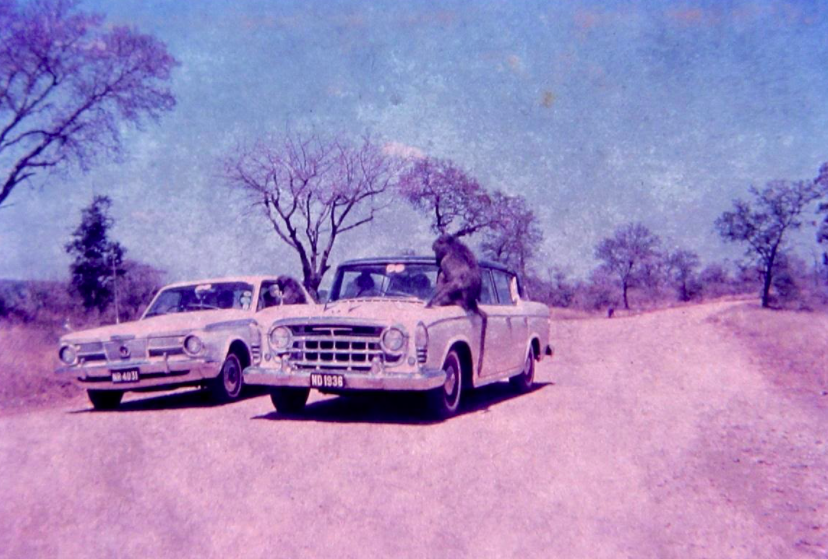 Photograph of two Baboons admiring the hot wheels. The car on the right of the Ford Taunus is a "Nash". In the USA it was quite a popular car, not so here. Nash was not related to Chrysler. One can see clearly the Nash ‘egg crate’ grille. Nash Motors Company was an American automobile manufacturer based in Kenosha, Wisconsin, in the United States from 1916 to 1937. From 1937 to 1954, Nash Motors was the automotive division of the Nash-Kelvinator Corporation. Nash production continued from 1954 to 1957 after the creation of American Motors Corporation. Vehicle ID by Sandy Buchanan. (Denis Strever, 1971) 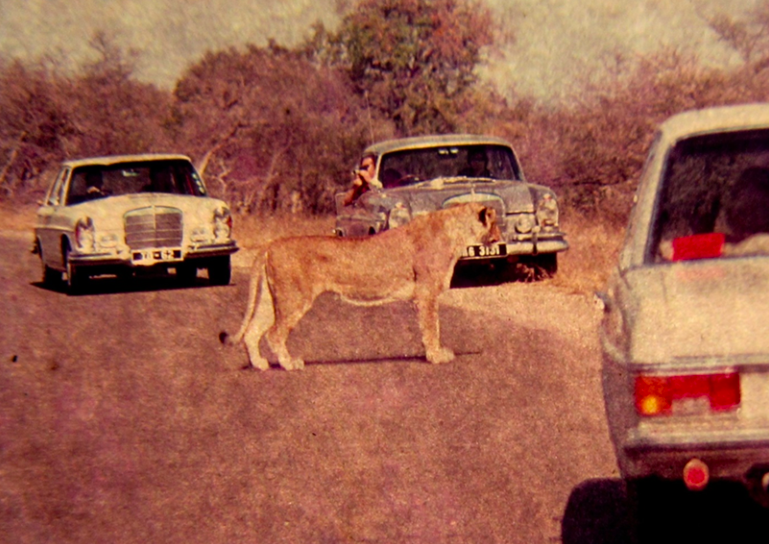 All three of these vehicles are Mercedes Benz cars. The two facing are possibly the "280E" model and the tail end is of a 220 model. Posing with the cars is a lioness. Vehicle ID by Sandy Buchanan. (Denis Strever, 1971) 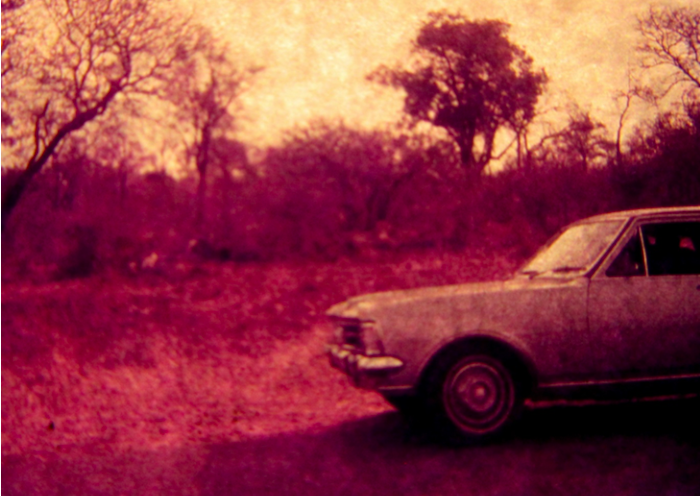 Front end of a Ford Taunus. The Ford Taunus came with many variations over the years. There might be a few lions in the background. (Denis Strever, 1971)

The Ford Taunus was a family car that was sold by Ford Germany throughout Europe, and was also available in South Africa. Models from 1970 onward were built on the same basic construction as the Ford Cortina MkIII in the United Kingdom, and later on, the two car models were essentially the same, differing almost only in the placement of the steering wheel. The model line was named after the Taunus mountain range in Germany, and was first made in 1939, and continued through several versions until 1994 (Wikipedia). In South Africa, it had a short run, and was no longer available after the late 1960s. 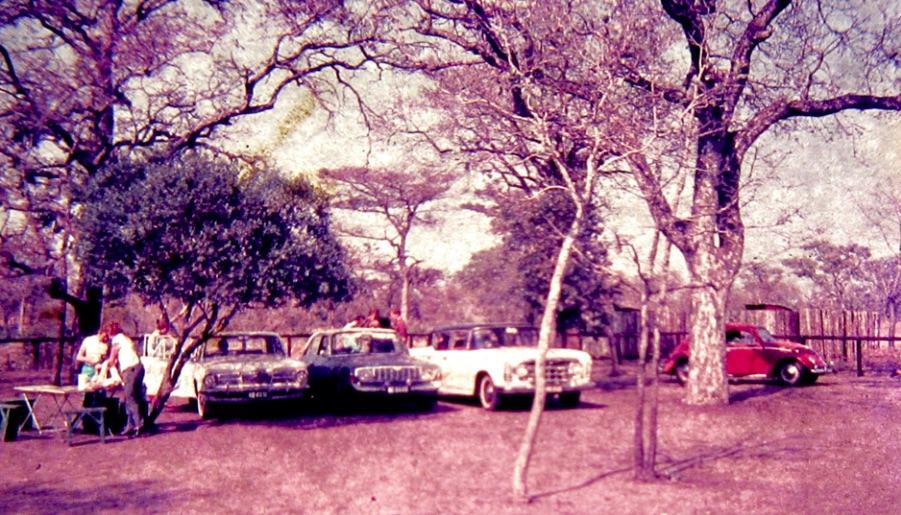 Another picnic, with the (left to right) Mercedes Benz, the Ford Taunus, the Nash and a red Volkswagen Beetle (Denis Strever, 1971) 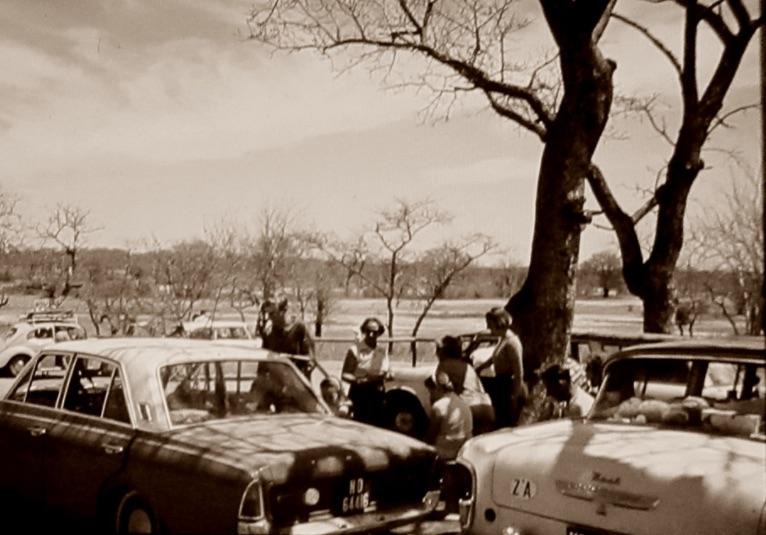 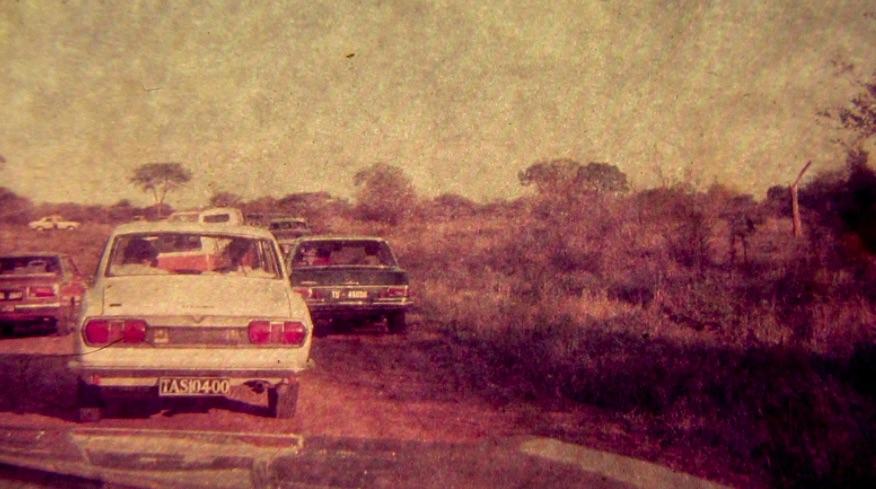 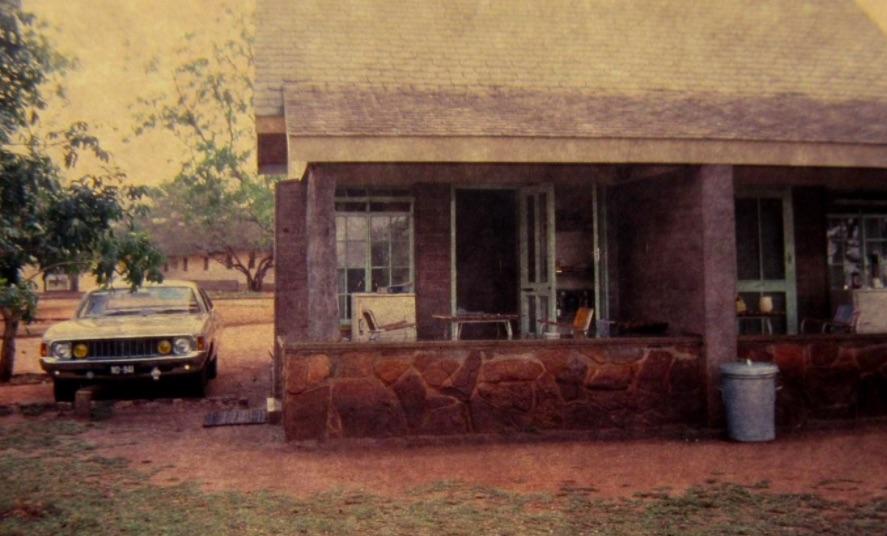 This beauty is a Chrysler Valiant. Vehicle ID by Sandy Buchanan. (Denis Strever, 1971) 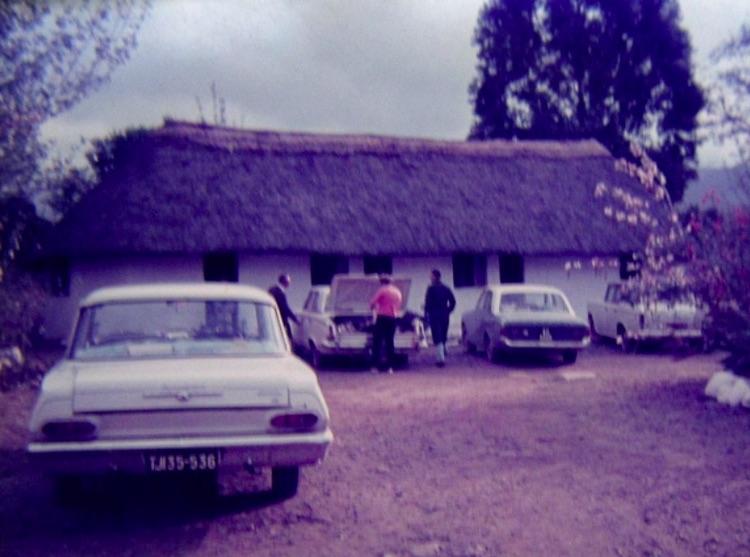 In the foreground, this car may be one of the Ford Taunus ranges, either the 17 M or the 20M models, but even with the unusual tail lights, it is difficult to tell (Buchanan 2021). In the background (left to right), possibly the Nash, then the two-tone Ford Taunus and possibly the same Peugeot 404 Station Wagon as below (Photo Denis Strever, 1971). 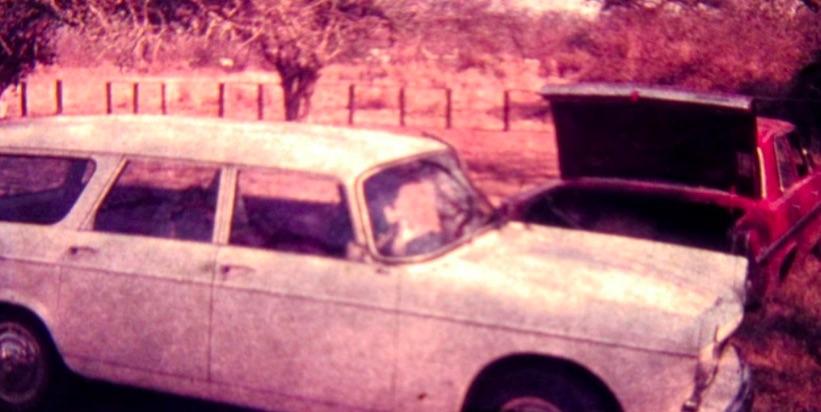 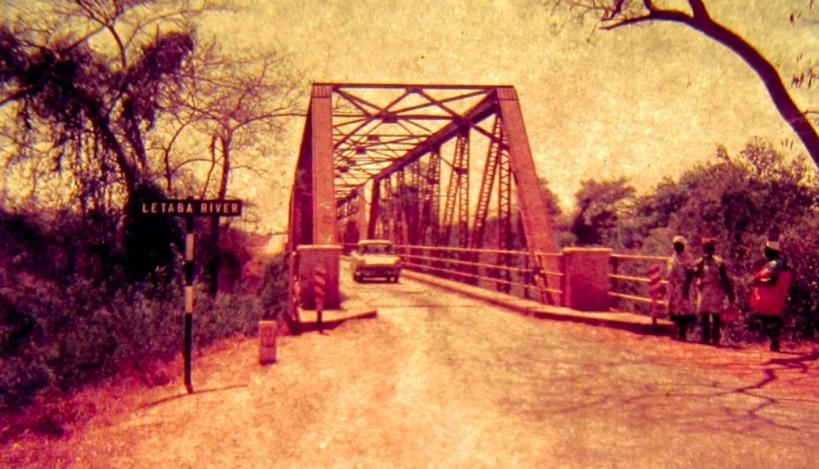 This could be a Ford Anglia from the 1960s, crossing the Letaba River (Denis Strever, 1971)

Sue Taylor holds a PhD in Plant Biotechnology from the University of KwaZulu-Natal, South Africa. Her current interests encompass cities and urban greening,  material culture (and what trash can tell us about society), degraded peripheries and researching the disintegration (and rehabilitation) of landscapes and buildings. She is currently a Research Fellow at the Afromontane Research Unit, QwaQwa, University of Free State (South Africa).