A walking tour of historic Calvinia 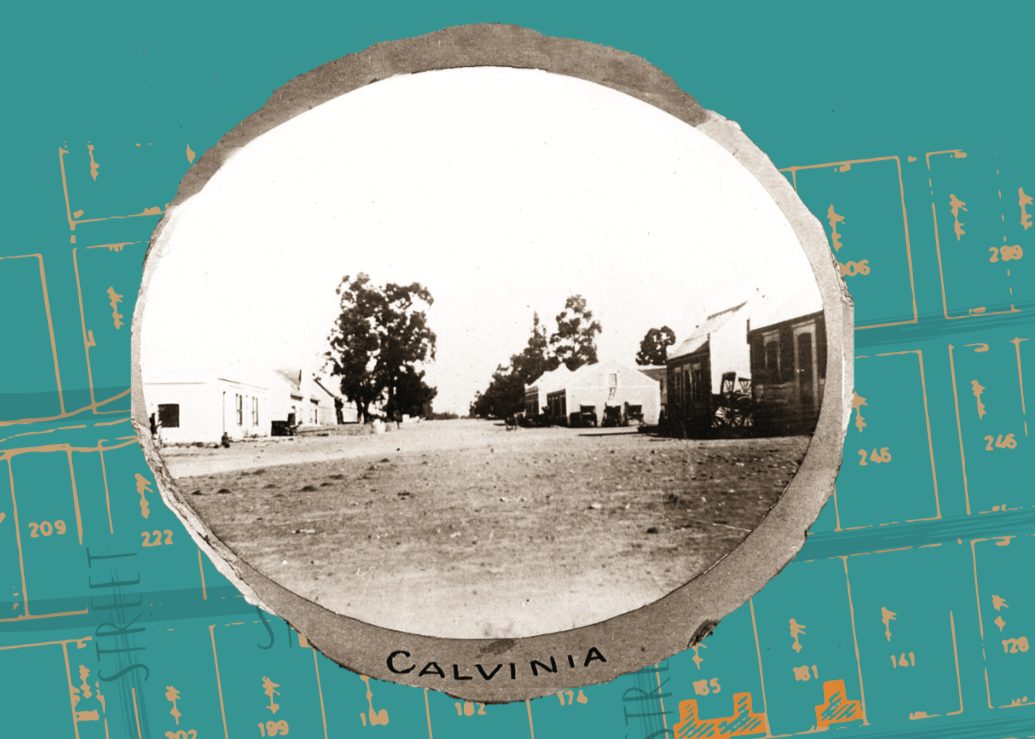 The town of Calvinia is situated south of the Hantam mountains. The name connects it to the early inhabitants of the area, the Khoekhoen, who probably called the place Hantam due to the abundance of the plant Pelargonium biflorium, which they called Heyntama.

The first colonists arrived in the 1740s. The farm Ackkerendam (now the nature reserve to the north of the town) was granted to Jan Otto Diedriks on the 24th December 1750. In 1763 it was transferred to Adriaan van Zyl, who passed it to his niece’s husband, Abraham van Wyk. The van Wyks later occupied the adjacent farm Hoog Kraal and in 1847 a section was sold to The Church Wardens of the Dutch Reformed Church at Hantam, the original name of the village. The first minister changed the name to Calvinia after the Protestant reformer, John Calvin.

The surveyor, J Knobel, laid out water erven from the centre of the town towards the Oorlogskloof River. These were watered from a spring at the western end of Water Street that led into a furrow that crossed these plots. On the other side of the long church square were dry erven. Later, the streets alongside the square were named Water Street to the south and Hope Street to the north.

The Census of the Cape Colony of 1865 showed the increases in occupations for the Clanwilliam District, of which Clanwilliam and Calvinia were the principle towns. From 1856 to 1865 those engaged in agriculture grew in numbers from 307 to 5435, manufacture 19 to 550 and commerce from 5 to 181. This was the fastest growing district in the Western Division. The increase in numbers was due to the changing nature of the Cape. From being a colony with a few towns and a vast interior sparsely populated with stock farmers, there arose a need for the establishment of new towns throughout the Cape. Many, like Calvinia, was established for the purpose of building a church. Shortly after the establishment of a church, traders followed as well as agriculturalists, then artisans such as carpenters and joiners, and ultimately lawyers to draw up contracts and sort out disputes.

The original church was at the end of the square in Church Street. In 1862 the minister was Rev McCarter, a Scotsman who, unlike most of his fellow countrymen came to the Cape, was not fluent in Dutch. Although well respected, his sermons became so tedious that part of the congregation broke away to form another church. This division lasted until 1877 when, after the Rev McCarter returned to Scotland, they were reunited.

During the two ostrich-feather booms (1865-1870 and 1900-1914) Calvinia was one of the main centres for their collection and shipping of feathers to Europe. This industry collapsed at the start of the First World War.

During the Anglo-Boer war Calvinia was attacked by a Boer commando. Abraham Esau, a coloured blacksmith loyal to the British, gathered a force of 70 locals to defend the town against them. In retaliation Easu was arrested and shot by the Boers. A few day later the British arrived and recaptured the town.

The railway arrived in 1917 and for many years was the conduit for the agricultural produce of the district. It closed in 2001.

Today, Calvinia is still the centre of the farming community and is fortunate to have kept its historic centre almost intact, except for an unsympathetic library building at the opposite end of the square from the church. 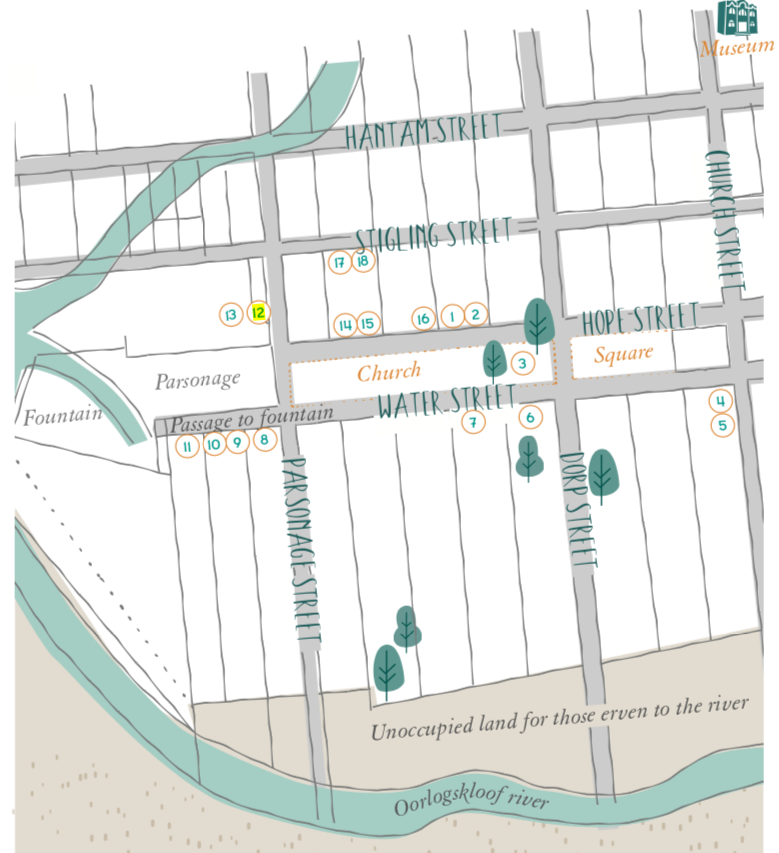 Originally the home of veldcornet Abraham van Wyk., it was built on an erf purchased in 1853 shortly after the town was first laid out. The house is a T-plan of traditional design with a voor- and agterkamer and two bedrooms flanking the front room. The kitchen is at the rear. The house is now a restaurant and coffee shop. Inside, there are fine cedar ceilings, doors and a wall cupboard. 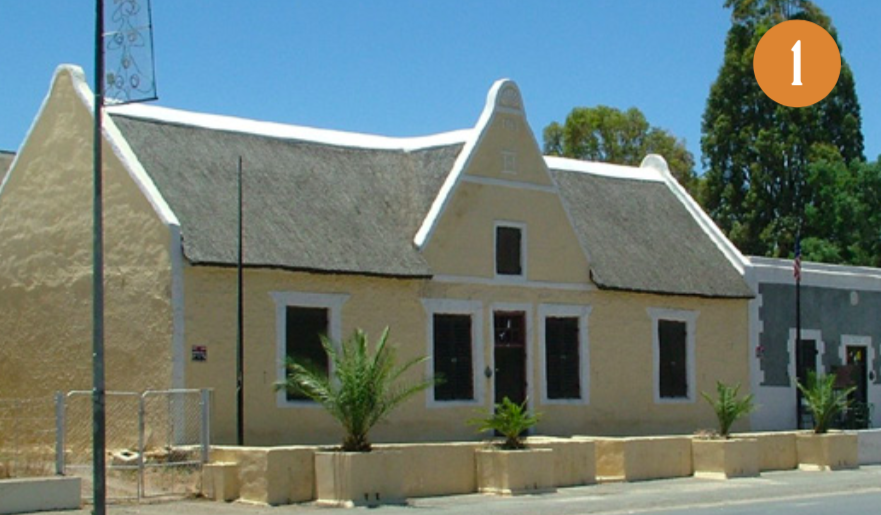 The Hantam House. A typical Karoo three bay flat-roofed house dating from the last quarter of the 19th century. This was previously a kraal and a section of the original wall can be seen inside. Now a bookshop and the entrance for number 44. 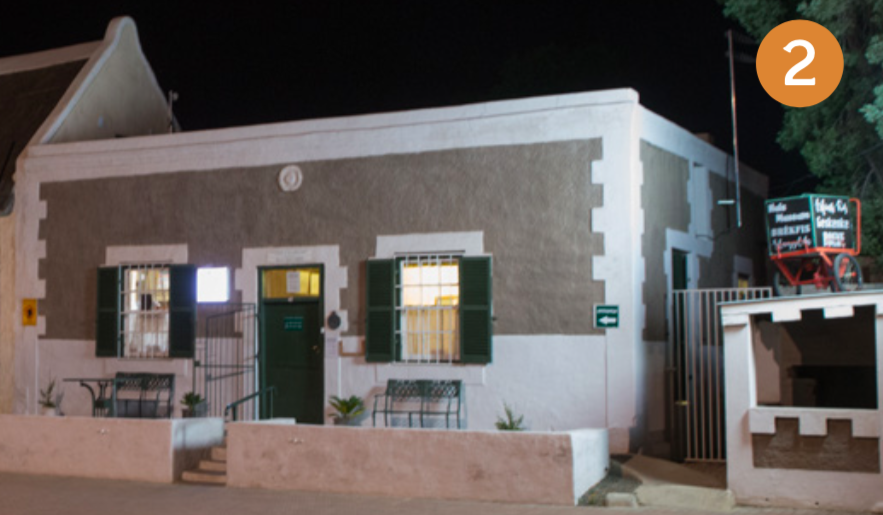 This is the second church in Calvinia. The first was between Hope and Water streets at their junction with Church Street. This was built at the time the town was founded. The second church, built between 1899 and 1900, was designed by the architect JH Grayford in the Gothic Revival style. 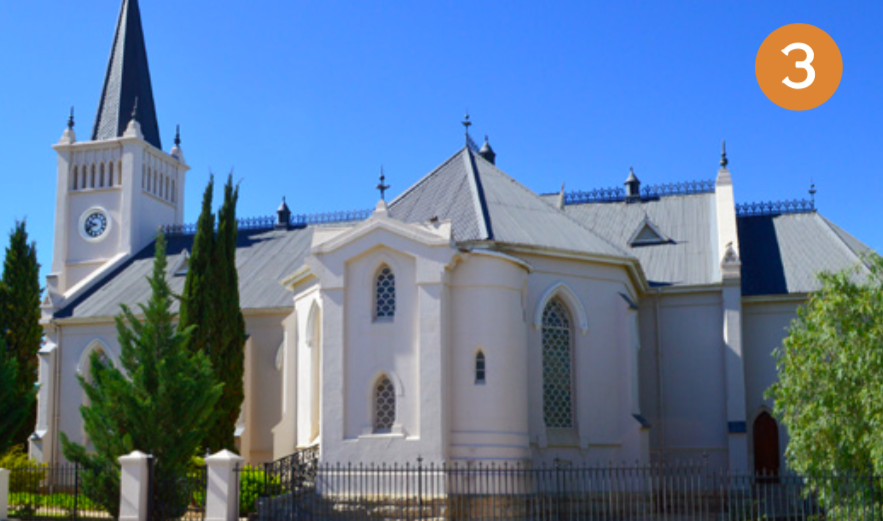 A corner shop with the typical chamfered corner doorway. The original building dates perhaps from 1858 when this section and the adjoining plots in lower Church Street were transferred to Gert Jacobus van Wyk. Altered into a shop in the later part of the 19th century judging from the glazed four panel doors and matchboard ceiling. Over the doorway there is a sign showing the name of one of the early owners, Benjamin Klein. 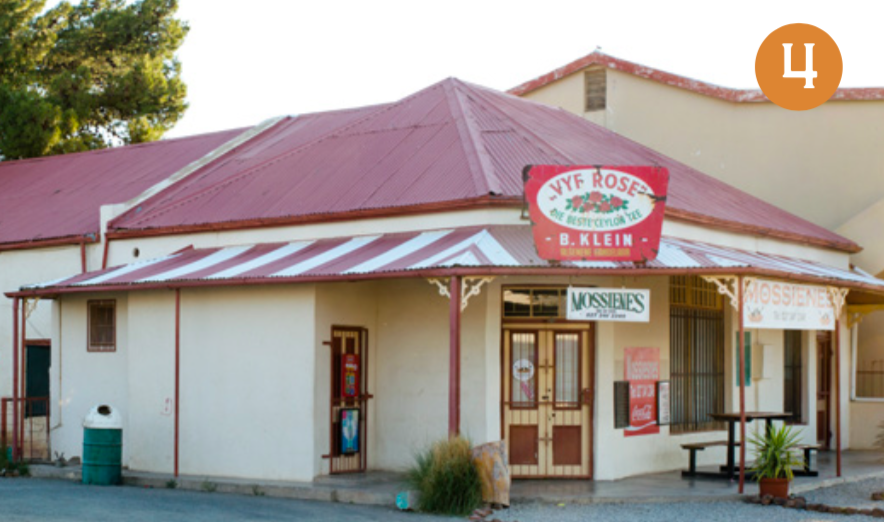 Adjoining number 17 Water Street are two Nagmaalhusies that probably also date from 1858 and used by the van Wyks when they stayed in town for church occasions. Later owned by Jacobus Adriaan Louw (right) and LAWS Visagie (left). 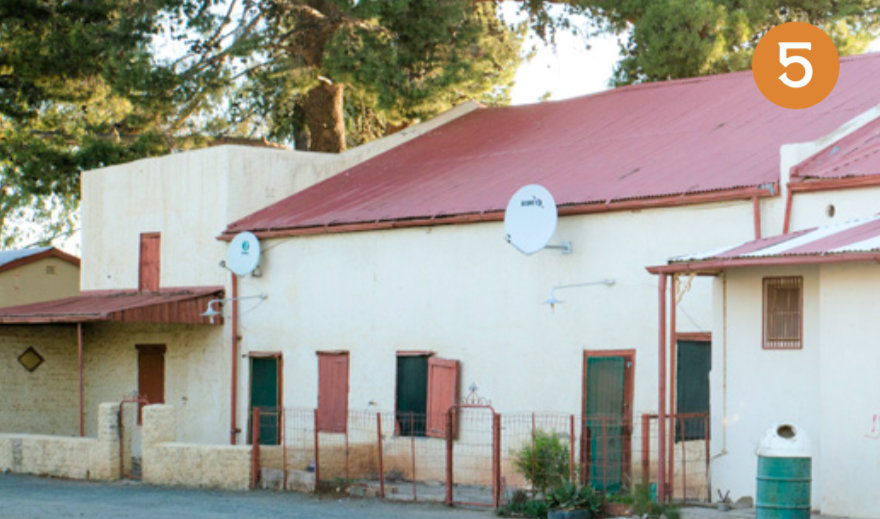 Die Ou Lady Guesthouse. T-plan house on the corner of Dorp Street built on a water erf purchased by Richard Fryer in 1851. The house has been modified including a veranda with Victorian broekie lace. It is said that these alterations date from the time when the thatch was set alight during the Anglo-Boer war, as the then owner, Jack van Dyk, was a British supporter in a town occupied by Boer sympathisers. 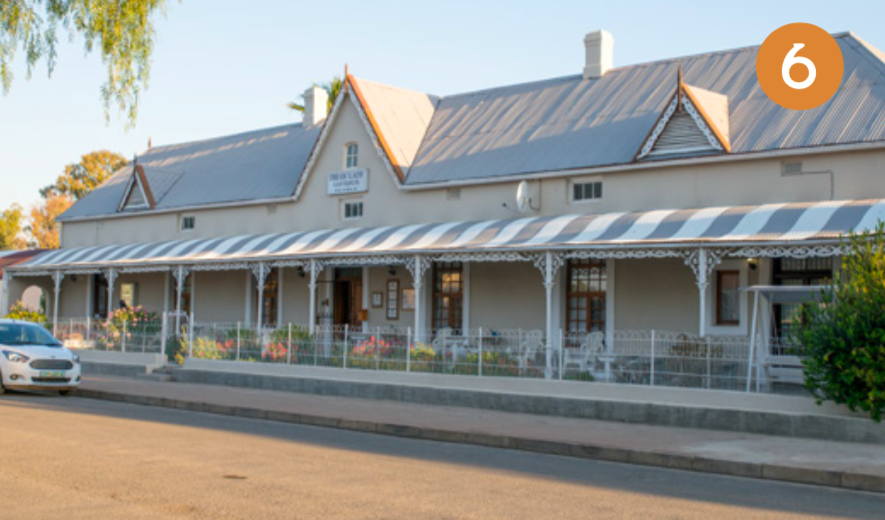 The Blou Naartjie. A restaurant and guest house. This is another early T plan house built for Jacobus Gideon Louw. Around 1876 it was in the possession of Louis Rosenblatt and used as a meeting place for the Jewish community. A painting of the house with its unusual keyhole shaped openings in the gables is on display at the local museum. 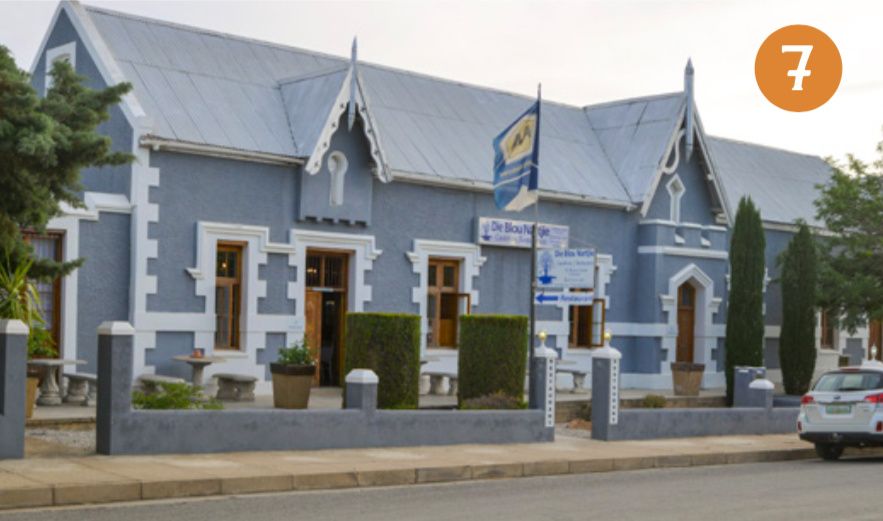 Calvinia Lodge. Guest accommodation. This is a late Victorian cottage built on an 1895 deduction of the original water erf sold to JAB van Wyk in 1855. This five-bay house with late Victorian six-pane windows was probably built for the owner of the plot, Hendrik WJ Visagie. 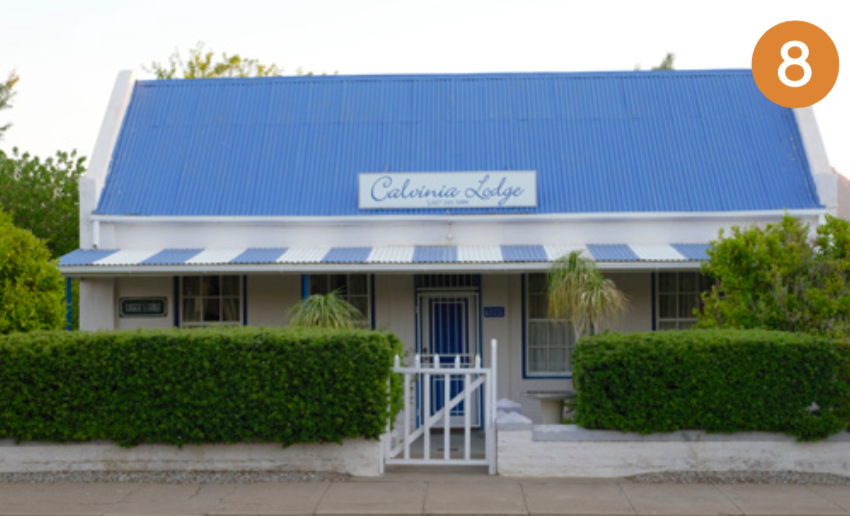 Die Dorpshuis. Period furnished guest accommodation. A T-plan house with various later extensions. Built on a water erf bought by JA van Wyk in 1855, it was originally thatched. The woodwork of the front façade is late 19th/early 20th century with two-pane windows and a four-panel door. At the rear are a row of tuishuisies, now used as guest accommodation. 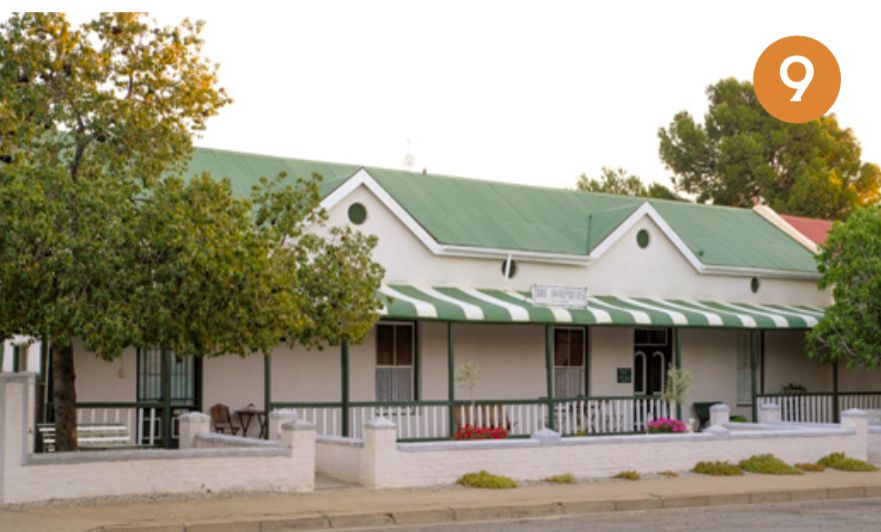 A three-bay house probably dating from the 1860s when JA Louw bought a subsection of the original erf from JA van Wyk. The windows are late Victorian with six panes and internal folding shutters. The board and batten front door is horizontally divided. 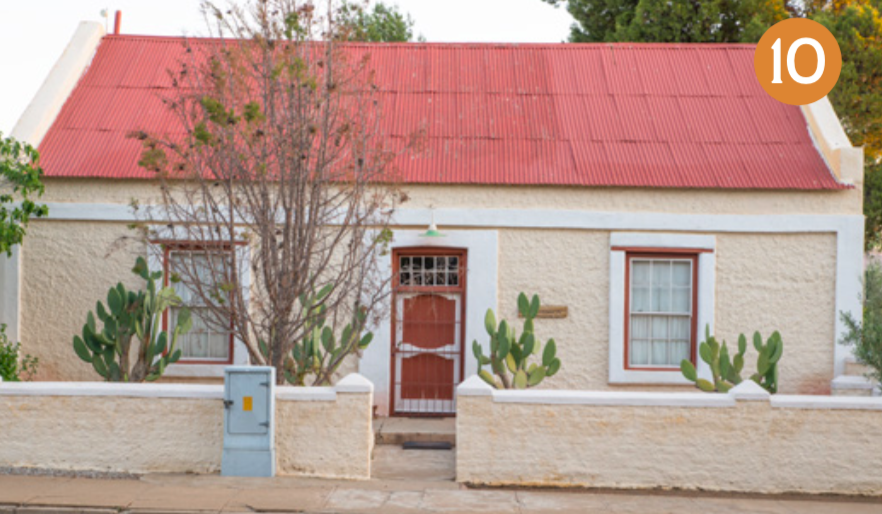 The Karoo Boekehuis, belongs to a trust to support those writing about the Karoo. Built on an erf purchased in 1854 by AJ Hough. This T-plan house was probably of the traditional layout with a voor and agterkamer. It was later changed to the English style with a front hallway with fine cedarwood screen doors. 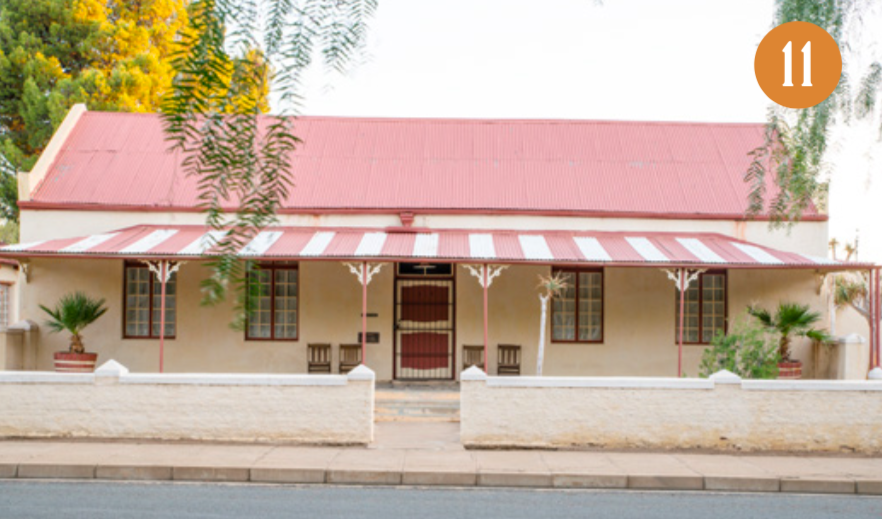 Carmel Villa. A guesthouse. There are few Victorian villas in Calvinia and this is the nicest. Dating from 1904, it is another link with Calvinia’s Jewish history. It was built by Leon Helfet, a trader who arrived in Calvinia in 1897 and had a small shop in Water Street as well as shares in another in Middelpos. Leon Helfet imported many of the elements used in the construction of the house. 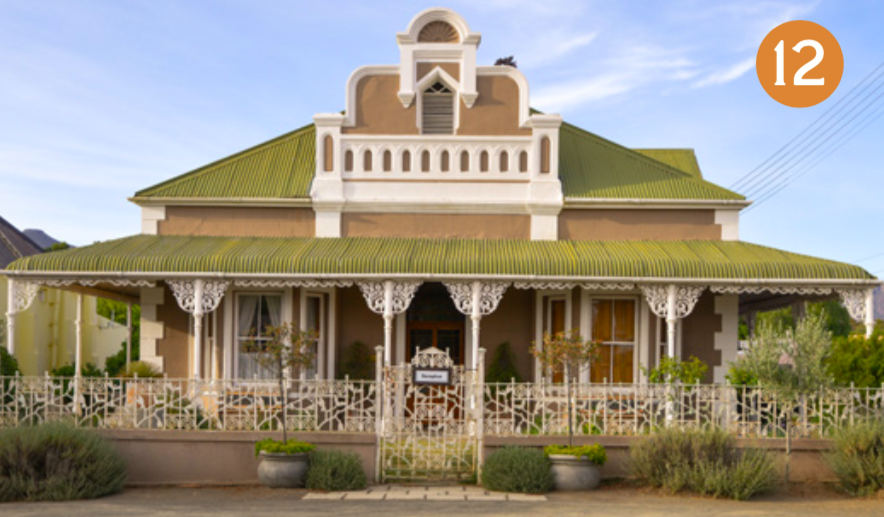 To the left of Carmel Villa is the town house of Joel Sher. Sher was a trader and supplied the Boer forces during the Anglo-Boer war. After the war, he became the owner of the Middelpos trading store in partnership with Leon Helfet and Herman Weinrich. Sir Anthony Sher, the famous actor, is descended from Joel. The house dated 1896 has late Victorian two-pane windows with louvred shutters. 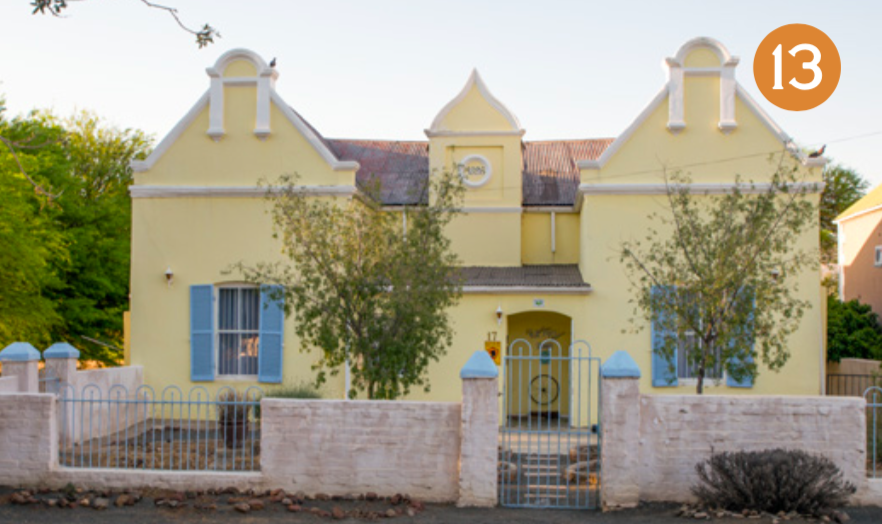 The Tuishuis. Guest accommodation. A late 19th century house, probably built by local contractor H Buck. Buck purchased various small lots in the town. The sale of the plot in 1870 gives a probable date for the house with its six pane windows and a six-panel door. The front façade, with its rough-cast walls and heavy quoining to the door and window openings, is said to be a trademark of Buck’s. 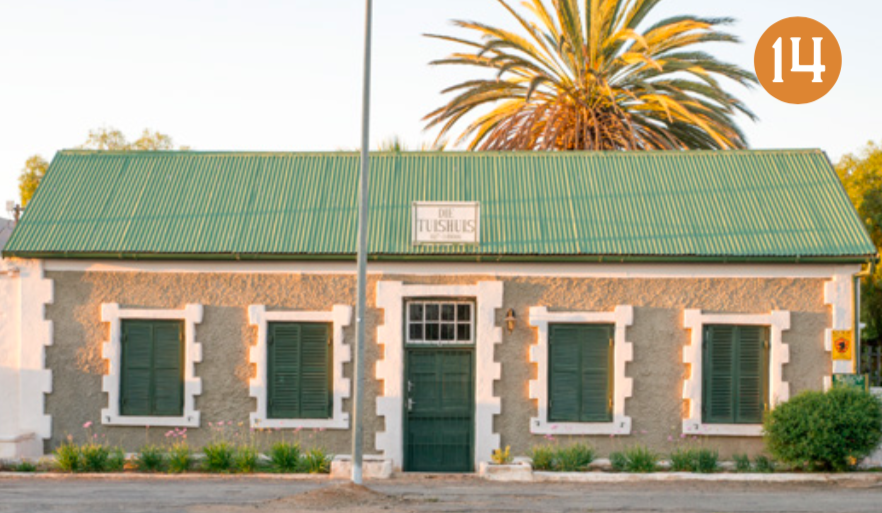