The Outeniqua Choo-Tjoe - Something to chew on 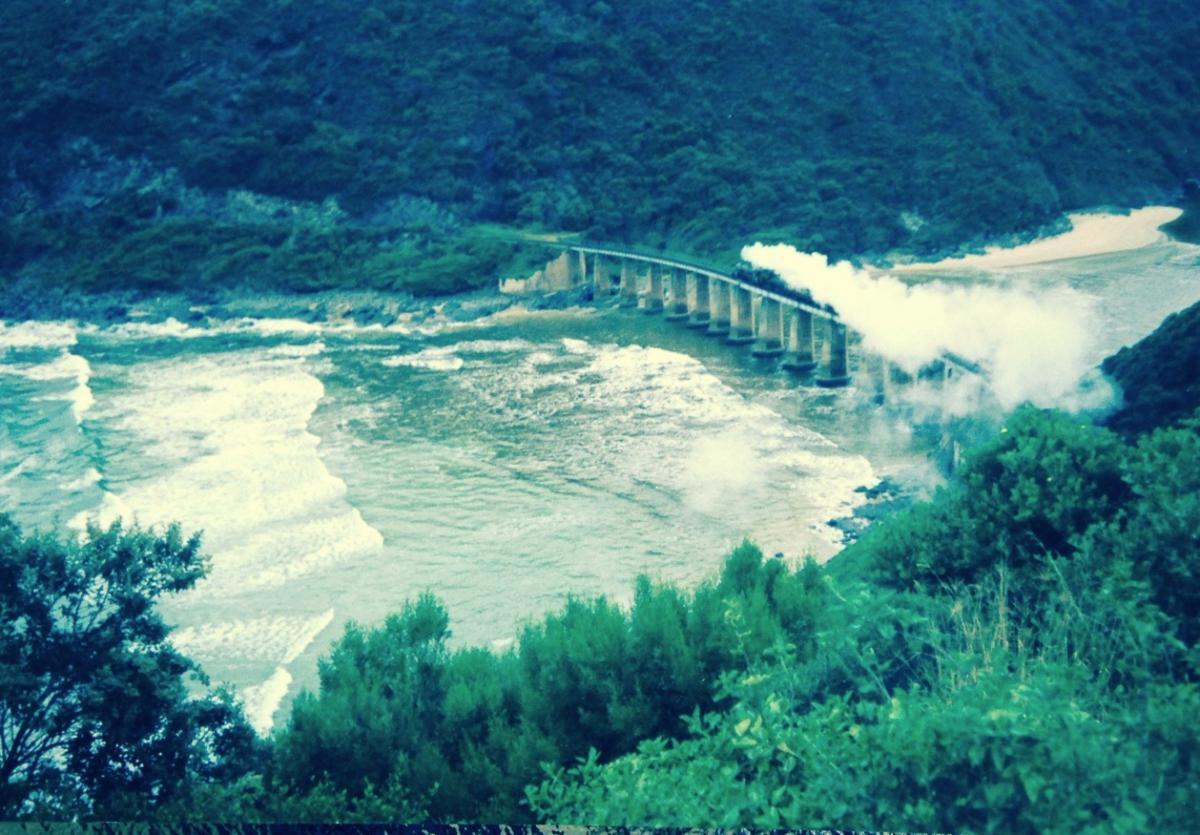 Thousands of people in South Africa and abroad dream of the day when the famous Outeniqua Choo Tjoe will run again. In the article below Peter Ball sketches the history and potential future of this world in one branch line.

The town of Knysna was founded in 1804 by an Englishman called George Rex, although the surrounding area had already been settled by the Dutch in 1770 for the purpose of farming and wood cutting. Rex saw great commercial potential in the indigenous forests and became the driving force behind Knysna becoming a port for the export of timber, even though the channel between the “Heads” became notorious for shipwrecks. In truth the land links were so poor that shipping was the only economic alternative no matter the risks involved. 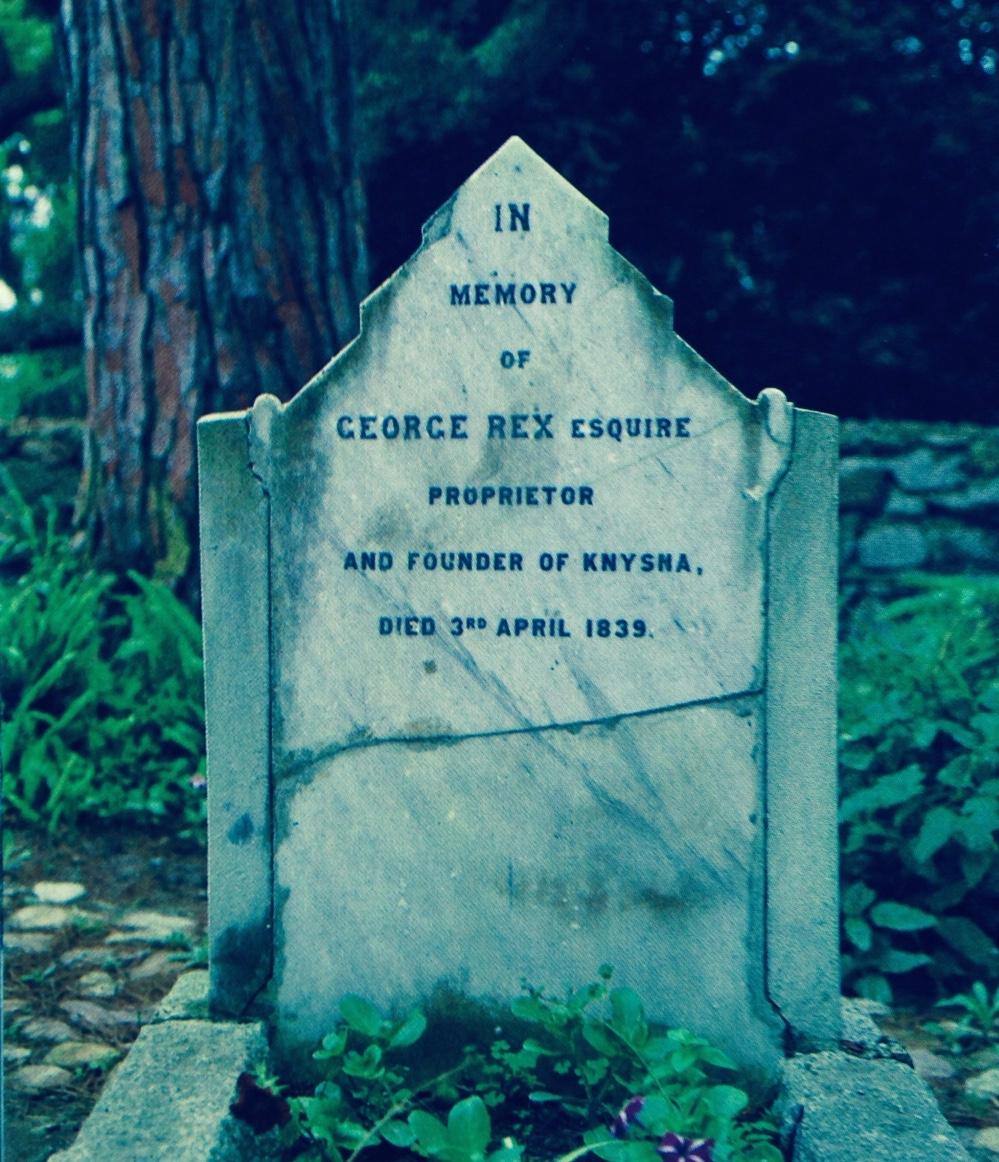 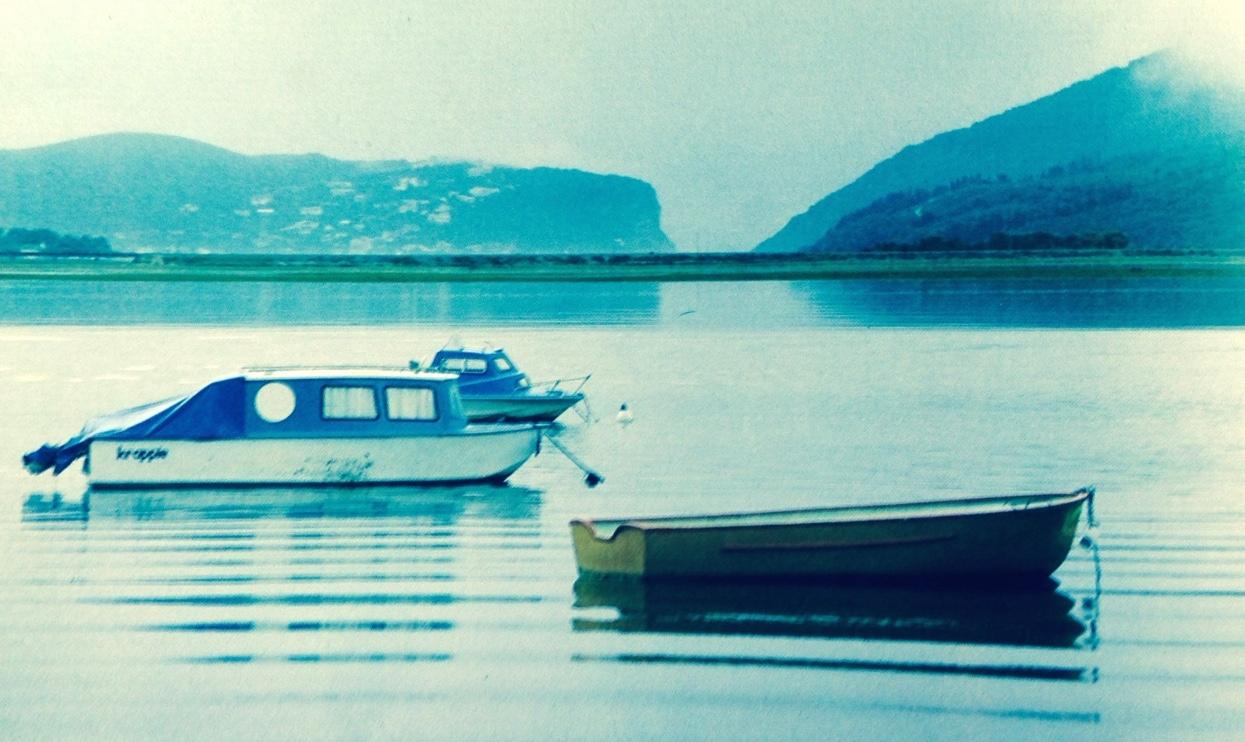 The Heads (The Garden Route by David Steele)

By 1870 a Norwegian family settled in Knysna by the name of Thesen and they became the owners of a business in logging, sawmilling, ship building and shipping. The Government’s Jetty on Thesen’s Island was completed in 1883 and the brig “Amulant” was the first ship to be loaded from the jetty with 3 000 yellow wood railway sleepers, bound for Cape Town.

Ironically Knysna had no railway of its own and as the turn of the century approached the local business community took it upon themselves to plan a railway from the harbour into the forest. The Second Anglo Boer War delayed proceedings and it was not until 1907 that the privately owned South Western Railway was opened as far as Diepwalle. The line was laid to the narrow gauge of 2’-0” (610mm) and there was every intention to extend the line to Avontuur, at the top of Prince Alfred’s Pass, in order that it would connect to the newly built line coming up the Langkloof from Port Elizabeth. This event never transpired, instead a Cape Gauge (3’-6”) branch line was surveyed and built from George, which opened in 1928. 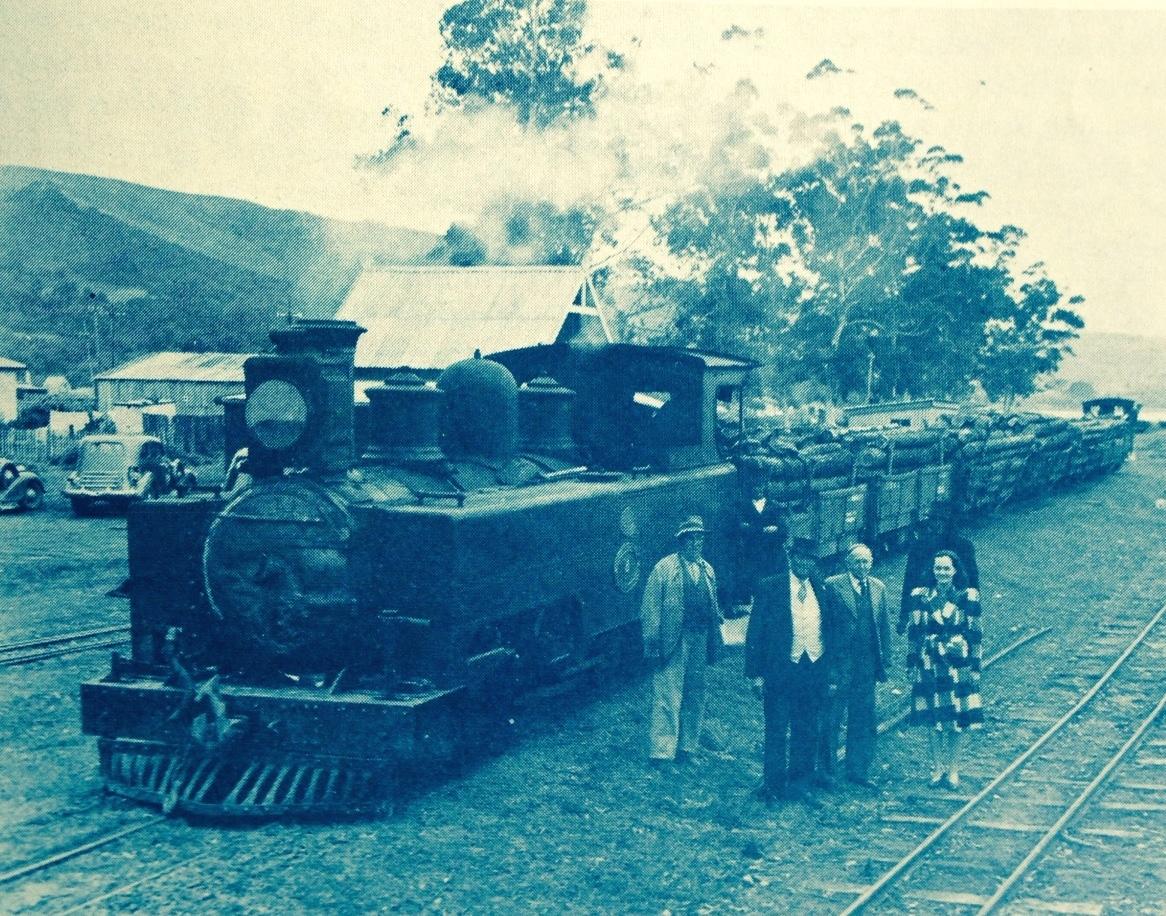 The George to Knysna branch line brought about the collapse of coastal shipping as goods were transferred to the railway, however the line was itself not exempt from competition as it was built at a time when the motor vehicle was coming to the fore and roads were being improved. The building of a new road along the shore (N2) eventually caused the passenger service to be withdrawn (1964) although a single passenger coach was attached to a goods train for many years thereafter. 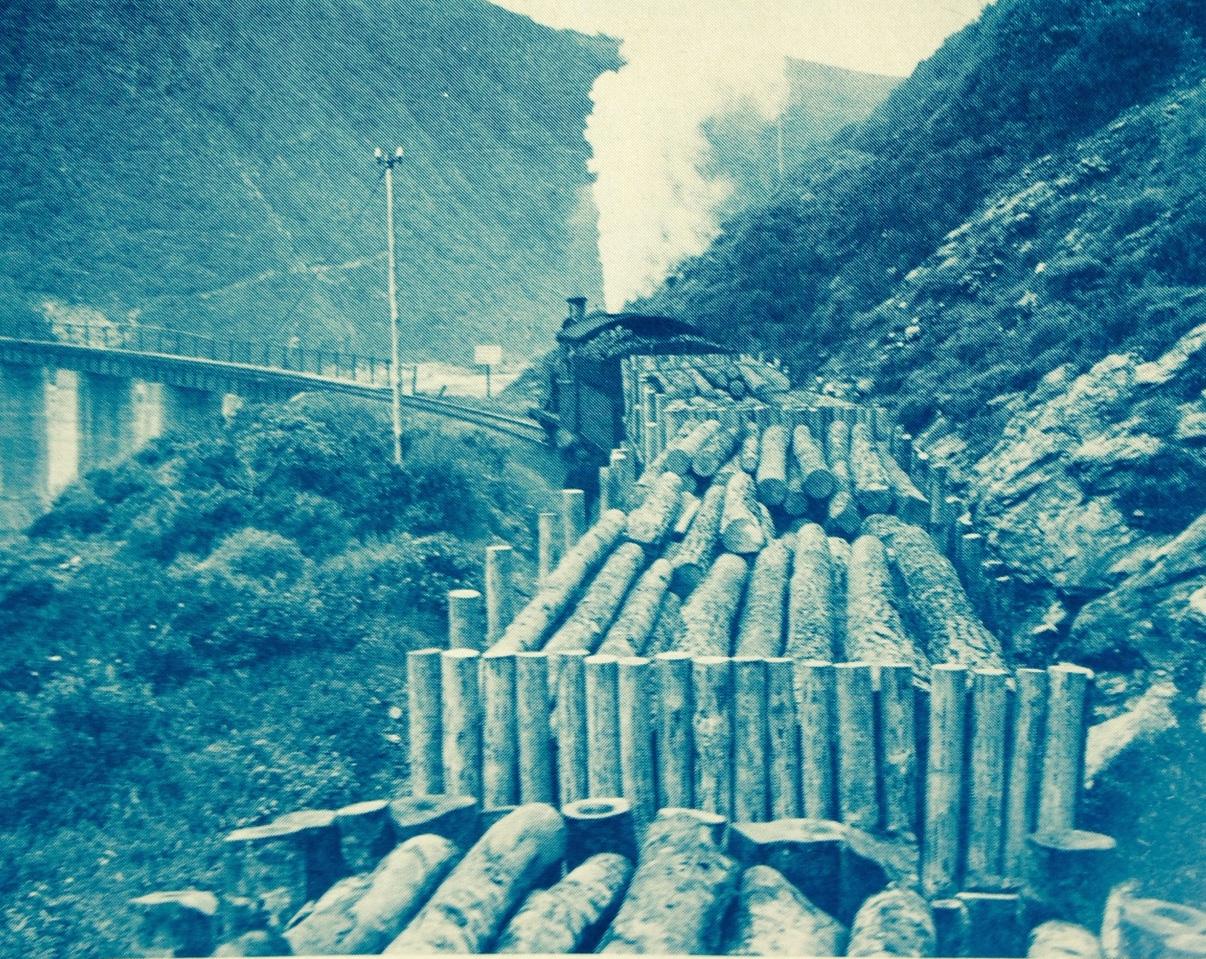 The George to Knysna branch became world renowned for the outstanding beauty of the scenery in which the line passed through and many local and overseas tourists were drawn to the Garden Route to travel the line. South African Railways obliged by providing special steam hauled passenger excursions, which became known as the “Outeniqua Choo-Tjoe”. These were a great success and a boost for tourism but Mother Nature was to intervene when torrential rain over several days in August 2006 caused a landslide at Dolphin Point, which has closed the line indefinitely.

It has now been eight and a half years since the George to Knysna branch was forced to close. A lot of water has flowed under the Kaaimans River Bridge since then but the fact remains that the line has not been re-opened and the longer it stays closed the more it will cost to re-open.

TRANSNET, the owner of the branch line, has as a matter of policy stated that it wishes to retain ownership but would seek a Concessionaire to restore and thereafter run the line as a feeder line to its core railway network, i.e. to the junction at George Station.

The latest report regarding the status of the branch line comes by courtesy of the lobby group the Friends of the Choo-Tjoe in their “The Loop” Newsletter No.15 of November 2014, the gist being that there is a prime need to shift the carrying of timber and waste, emanating from Knysna, back onto the railway from the road. Hopefully this will bring together all the stakeholders in the common cause of restoring the railway line. 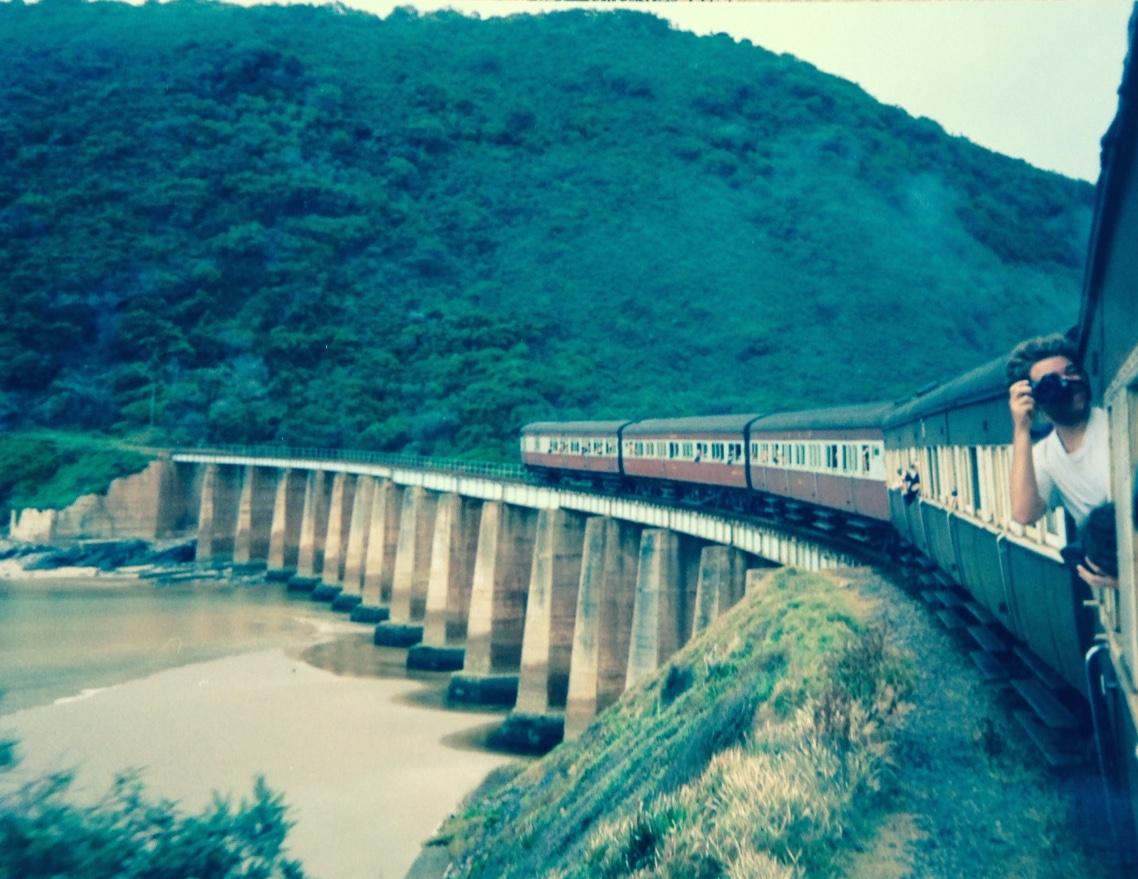 Of course there are “Nay Sayers”, who believe that the line should be consigned to the past and only viewed on YouTube or in books and the track bed be re-used for the benefit of mountain bikers in what would become an “Otter Trail” for cyclists. Not a bad idea if there was a surfeit of branch lines as there was in Britain at the time of the “Beeching Axe” during the 1960’s. Some have become very fine cycle paths as they are generally flat and one in particular, between Wadebridge and Padstow in Cornwall, is very popular in summer and is a definite attraction for holiday makers.

The railway preservation movement in Britain has many instances where seemingly insurmountable odds have been overcome and closed down branch lines have been re-opened. The Bluebell Railway is a case in point where a group of preservationists in 1960 took over a short portion of the closed down line between Lewes and East Grinstead. The railway was curtailed at both ends and the rails lifted, leaving a 5 mile (8 km) long section in the middle divorced completely from British Railways main lines. It took 53 years to reconnect to the London end of line when on 23rd March 2013 the first passenger train rolled into East Grinstead Station from Sheffield Park (the southern terminus). For the last half century all locomotives and rolling stock were of necessity brought in (or taken out) by a low loader lorry, down narrow country lanes!

Should the re-instatement of the entire line (65 km) be too costly to implement the Bluebell blueprint could be used for the “Choo-Tjoe”, as Knysna could be the hub with the line being extended westward gradually in stages, firstly to Belvedere, then Sedgefield, then Wilderness and so on until George is eventually reached. In the meantime the museum at George could also be used as a centre for railway enthusiasts to utilise the sidings for the running of “live steam”, just as they do at the Buckinghamshire Railway Centre, at Quainton Road, England.

This may seem “Pie in the Sky” especially in the knowledge that the majority of the South African population is underprivileged and requires improved service delivery to better their lives. One just has to drive out of Knysna towards Plettenberg Bay to see first hand the shanty town that exists along the N2, which is in dire need of improvement/replacement. The revival of the “Choo-Tjoe” will bring back the railway enthusiasts in their droves from all corners of the globe and in so doing create much needed jobs in the local tourism industry.

In conclusion we must also safeguard our heritage for the generations to come and the revival of the “Choo-Tjoe” should be an opportunity not to be missed. Where there’s a will there’s a way and the will is there.