Some West Coast Memorials and Monuments

Memorials in the modern era have sometimes taken on different aspects, because public opinion has moved from the original lionisation as more awareness has been given to differing opinions and views.

The Rhodes Must Fall protest and subsequent removal of his statue at the University of Cape Town may be considered to have been the forerunner of what has become a global movement. Perhaps now is an appropriate time to contemplate some of those that exist in the west coast region of South Africa. It is not my premise to decide whether they retain relevance or not.

It is notable to first consider that there are no public memorials to the Stone Age peoples, San and Khoekhoe, slaves or the forced removals that occurred in the area, not in the accepted, conventional sense at any rate. There might be an argument that sites such as middens containing evidence of early inhabitants, stone age tools, human remains and paintings might be considered as memorials, but we are conscious they were not specifically constructed as places of memories.

So, a random look at some of the existing commemorations.

San paintings on Kasteelberg in the Riebeek Valley - Chris Murphy.jpg 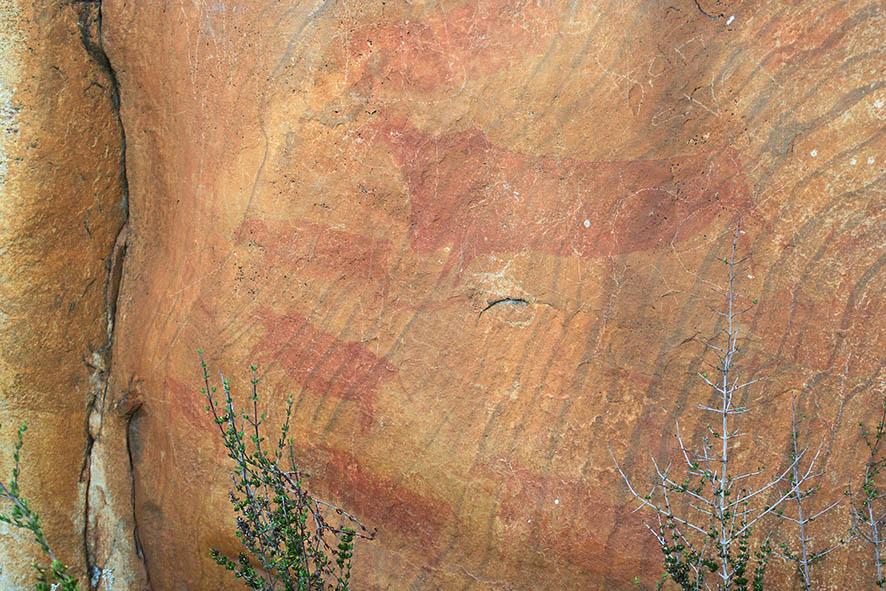 San paintings on Kasteelberg in the Riebeek Valley. The overhang contains images of Eland and other fauna that was endemic before agriculture and settlement substantially altered the landscape.

Khoekhoe site near the summit of Kasteelberg in the Riebeek Valley. Even today a high, difficult to access, waterless point it is a curiosity that such an effort was made to record images there. 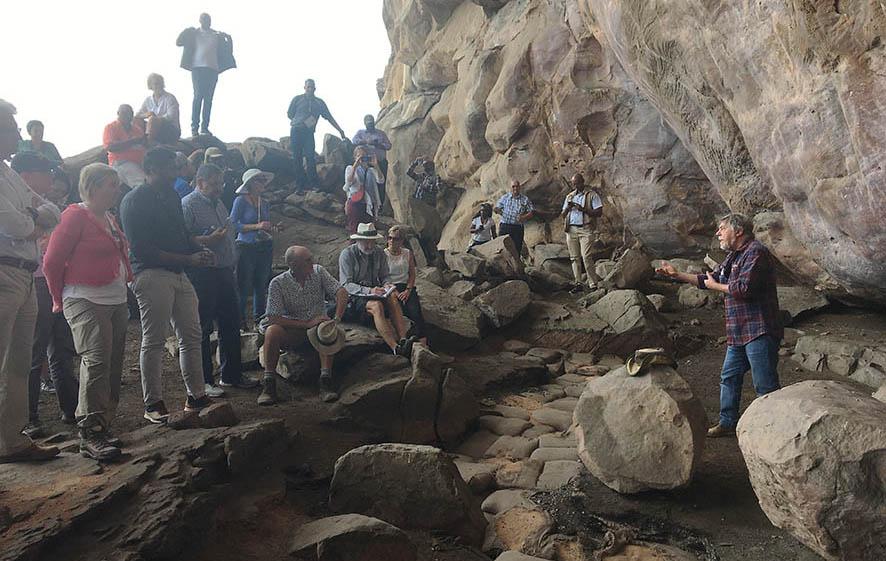 Diepkloof Rock Shelter. Intentionally marked ostrich eggshell fragments found at the Diepkloof Rock Shelter are amongst some of the earliest decorated material created by humans. The shelter, a Provincial Heritage Site, is earmarked for an application to declare it a UNESCO World Heritage Site. It is a vital component on The Artist’s Journey, part of the Cradle of Human Culture Route on the #Weskus. Professor Parkington at the launch of the site as a consequence of a grant by the US Consulate General, in November 2019, explained the relevance of the finds. 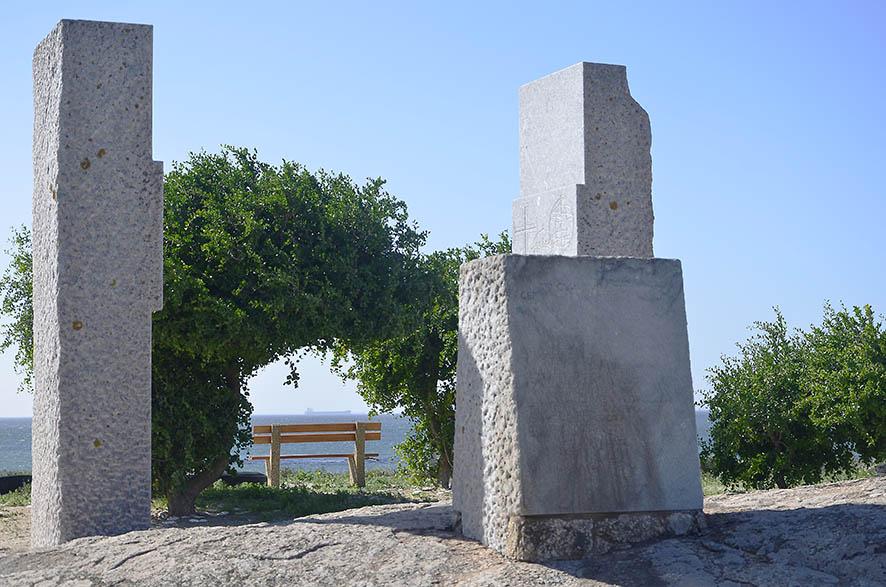 The Vasco da Gama Memorial in St Helena Bay, remembers the anchoring of his fleet near what is now mouth of the Berg River on 8 November 1497 in order to affect repairs and take in supplies. After an initial friendly interaction with the indigenes the circumstances altered with an altercation in which da Gama and a few others were wounded. 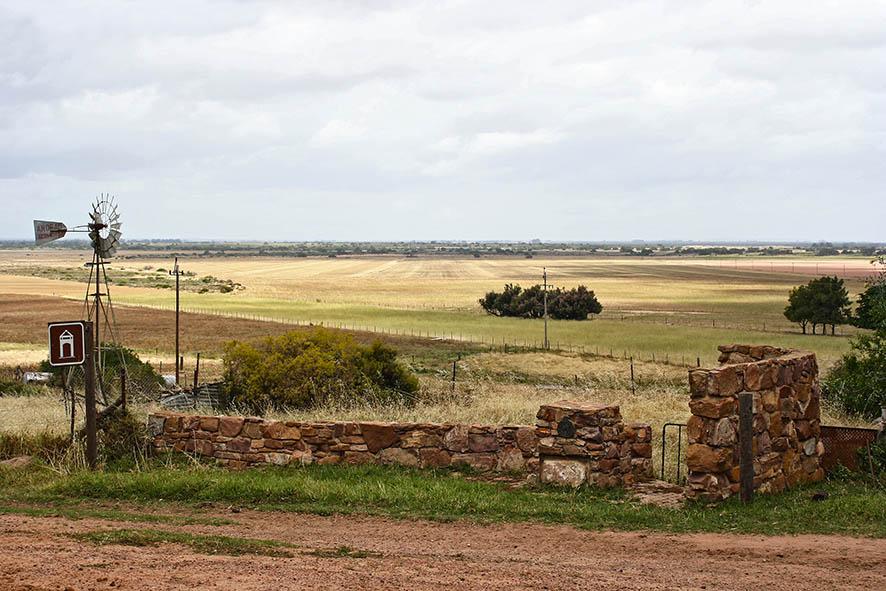 The Maclear Beacon at Aurora. A Provincial Heritage Site, this is located on the outskirts of the village where Thomas Maclear located a beacon, near the original north terminal of the Arc of Meridan positioned by the Abbe de la Caille in his quest to measure the circumference of the earth in the southern hemisphere. Although his calculations proved to be incorrect, de la Caille is credited with introducing Geodetic Surveying to South Africa.

Members of the Cape Centre of Astronomical Society of Southern Africa before a pyramid on the Swartland plain - Chris Murphy.jpg 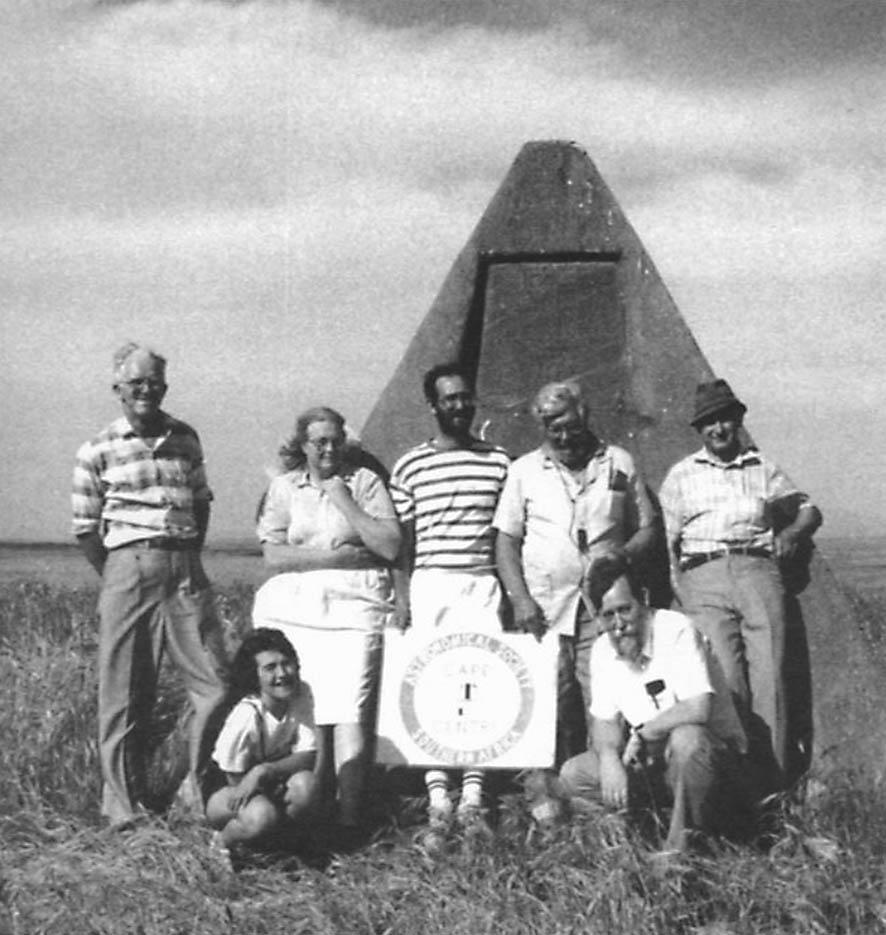 Members of the Cape Centre of Astronomical Society of Southern Africa before a pyramid on the Swartland plain, near Moorreesburg, also marking Maclear’s baseline (eastern point). Source: MNASSA 1989, vol 48 no 3. Three memorials stand before De Oude Kerk (now Riebeek Valley Museum, a Provincial Heritage Site) in Riebeek Kasteel. On the left one to an expedition led by Pieter Cruythoff in 1661, far right to Simon van der Stel’s passing in 1685, and one to the Afrikaans language in tandem with the Paarl Language Monument, erected in 1975.

C Louis Leipoldt’s grave is in the Pakhuis Pass, originally constructed by Thomas Bain and completed in 1877. The placing here is of significance because of his deep love and association with the terrain of the Cederberg. Traces of San rock art are still visible on the rock face above the grave. Leipoldt was a noted Afrikaans writer, poet, medical doctor, botanical explorer, wine connoisseur and chef. 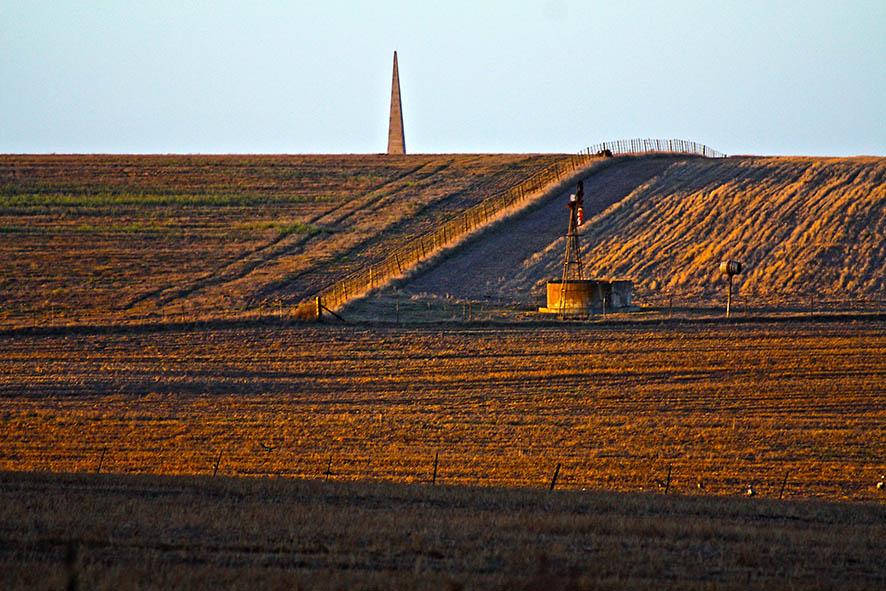 Hildebrand Memorial and Grave, commemorates the death of a Boer soldier who was killed in a skirmish with British forces near Darling, the furthest south the forces had travelled, and closest to Cape Town. It was consecrated in 1940.

Site where where the last arms were laid down at the end of the South African War in 1902 - Chris Murphy.jpg 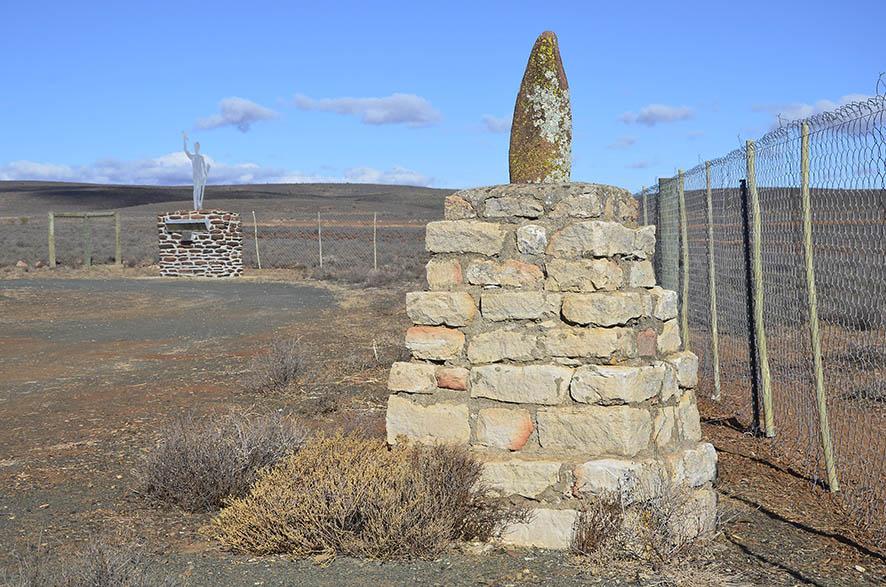 This site near the Oorlogskloof River, Nieuwoudtville is where the last arms were laid down at the end of the South African War in 1902. A plaque was unveiled by Prime Minister BJ Vorster in 1968. 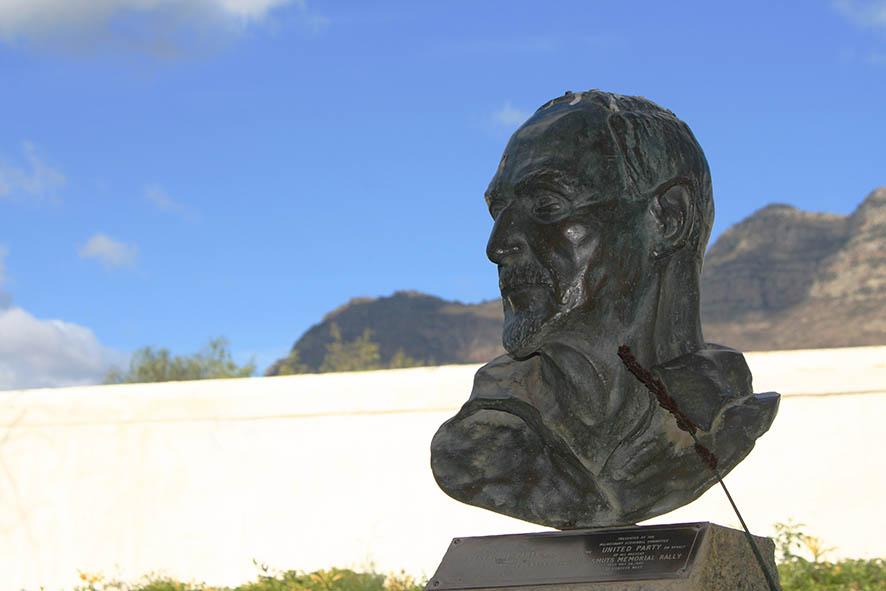 The birthplace of JC Smuts, now on the property of PPC Riebeek West is a Provincial Heritage Site, commemorates his early years. This bust was unveiled by the Malmesbury Divisional Council of the United Party at the first Smuts Memorial Rally on 26 May 1962.

Memorials to JC Smuts and the Great Trek - Chris Murphy.jpg 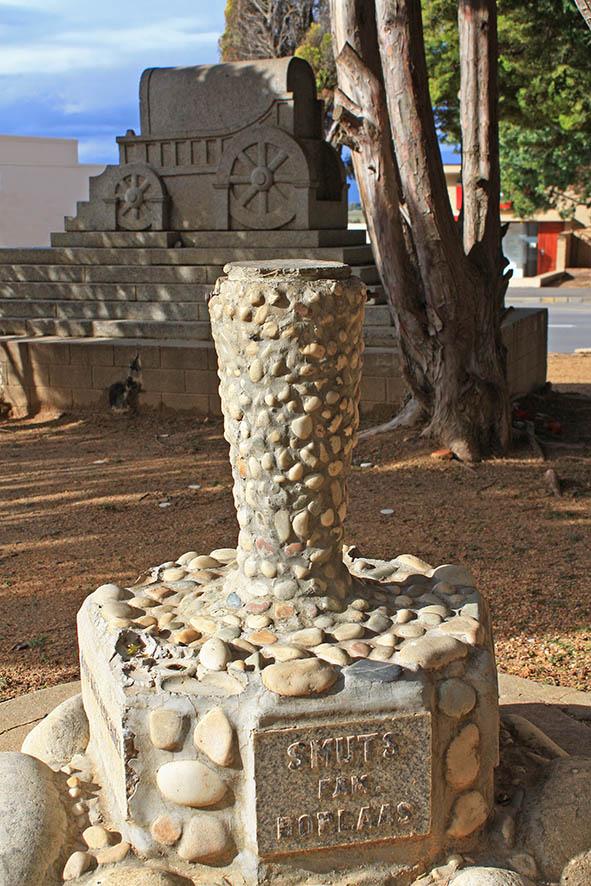 These memorials to JC Smuts and the Great Trek stand alongside Voortrekker Road in the centre of Riebeek West.

Monument before the old town hall in Moorreesburg - Chris Murphy.jpg 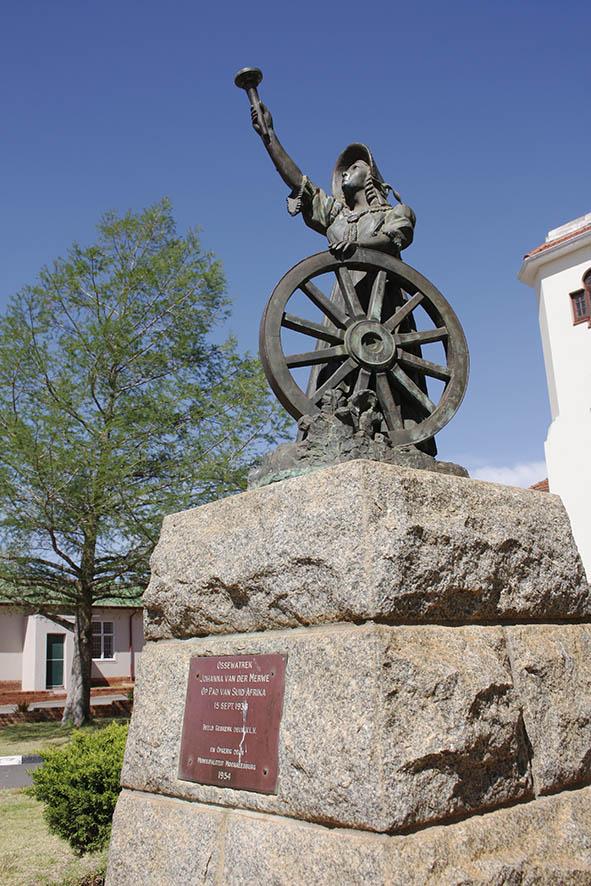 The monument before the old town hall in Moorreesburg is titled, ‘Ossewatrek Johanna van der Merwe Op Pad van Suid Afrika 15 Sept 1938’, and was erected by the Moorreesburg Municipality in 1954. 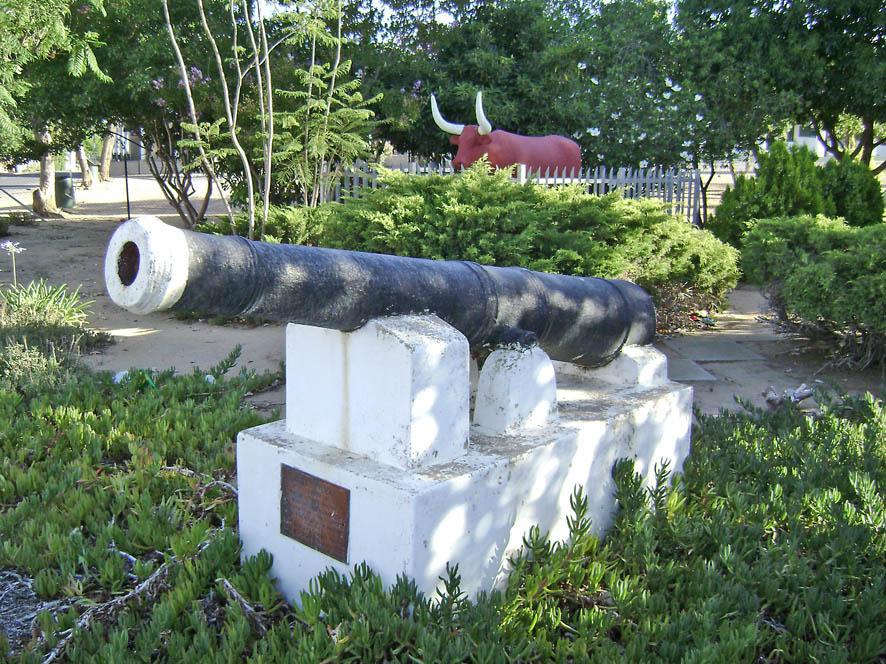 The ox and cannon stand on the square in Riebeek Kasteel. The ox was made in celebration of the contribution of the ox during the Great Trek and is the only known cement version. It was created by Christoffel Basson. Alongside, the cannon was removed from above the farm Swartdam, apparently in the presence of the writer Lawrence G Green. Both were located during the festivities in 1938.