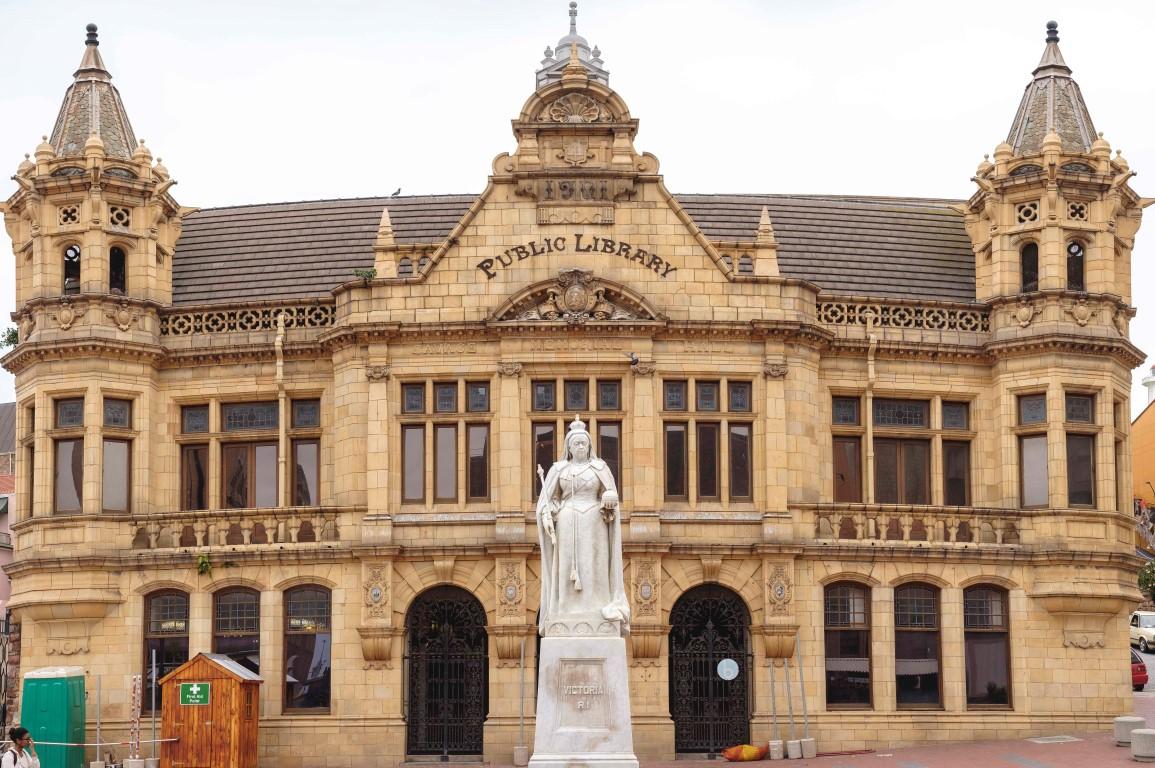 The Settlers Park Monument is in fragments, the Horse Memorial is missing its Soldier, and Queen Victoria has a green dress.  All across the nation, monuments are covered in graffiti and paint. The bronzes are corroding, the marbles are stained, and the iron is disappearing everywhere, but this is all in a day’s work in the life of an art conservationist.

“Hi!” My name is Josh, and I am a conservation technician. This is simply a fancy way to describe a person that cleans and repairs valuable historic objects. To do this, I need to be able to follow instructions closely, and have a steady hand – like when I was pinning back the fingers of a marble statue.

Skilful hands are essential in this job, because on a regular basis I have the privilege of physically cleaning or repairing valuable and vulnerable heritage objects and monuments. At times this work can be nerve racking, painstakingly repetitive, or dare I say, “tedious.”

To be good at this work one has to have the right temperament. The “patience of Job” will go a long way with the delicate work required while fine motor skills and a good working knowledge of material science should keep you out of trouble.

I remember how I once spent weeks cleaning the corrosion from the intricate engravings on the blade of a Cape Military cavalry sword with an engravers pencil under a microscope. A stiff back, a kink in my neck, and a very satisfied client was the end result, along with that deep sense satisfaction one gets from a job well done.

Another time I spent months with a team on scaffolding, exposed to the merciless Cape Town South Easterly restoring sandstone drip lines. When you spend more than twelve hours a day outside, six days a week, for months on end, you start to understand the infamy of the ''Cape of Storms.''

A labour of love is a good description of a conservation technician's work, because most of what we do is not as romantic as people might believe. Very often it is just plain hard work. However, it comes first in job satisfaction and is an infinitely interesting job.

You might be surprised to learn that the bulk of my work consists of simply cleaning these heritage objects. This might include anything from removing bird guano from the head of General Louis Botha on his horse, or carefully removing the paint from the Queen Victoria statue after the bout of vandalism we had in 2015.

You might be wondering why then so high a title for the servant of this menial task? The vandalism of Queen Victoria's statue in Port Elizabeth is a good example of just why it is so important to commission a trained conservationist for this work. 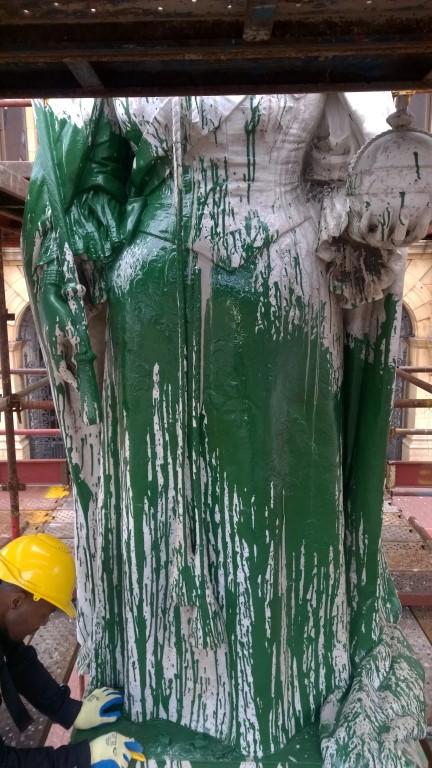 The attacks of 2015 were not the first time the Queen had been vandalised. Upon closer inspection, one could clearly see where previous cleaning attempts had caused serious damage.

I'm getting ahead of myself, however. In the following paragraphs I want to tell you how we restored Queen Victoria's marble dress from its green paint disgrace to the regal glory she stands in now.

It was late one evening down in Govan Mbeki Avenue in Port Elizabeth when the CCTV cameras caught images of a car coming to a stop near the statue of Queen Victoria. A man jumped out with a bucket, and in a few shorts steps proceeded to douse the queen in a splash of bright green paint!

In seconds, thousands of rands of damaged was done. You see, the choice of green paint was truly unfortunate, because unlike most other colours, green is a particularly difficult pigment to remove. The situation was compounded when it took authorities a couple of months to take proper action. This meant the paint had cured and the porous Sicilian marble had absorbed a rather large deep green stain.

As a conservation technician my first ethical responsibility is to retain as much of the original object’s material as possible. So in this case, under no circumstance could any stone be removed during cleaning, only the paint could be removed. Some parts of the statue already showed serious degradation where somebody else had used pool acid to remove graffiti.

Material science will tell you that an acid won't remove organic paint. Instead the acid was removing layers of stone! The acid reacts with the calcium carbonate in the stone creating the false impression that the acid has removed the paint, while in actual fact it has dissolved the stone on which the graffiti was layered!

The problem with acids is that they clean indiscriminately; an acid cannot distinguish between a soiled surface and a clean surface. Another problem is that the acid will preferentially erode areas of the stone that are naturally weaker, exposing the grain of the stone, which creates an unsightly unnatural weathered look.

Acids should only be used by a trained professional in specific situations at the right dilutions. If used correctly, chemical cleaning can be very effective indeed, but it is dangerous to attempt unless you know exactly what the results will be – and even then, you always do a small spot test on areas of the object that are hidden from view.  Realistically, if every time the Queen is vandalised, and cleaned with acids, eventually we will have little more than a smooth round rock left standing on its plinth!

The process we followed for cleaning 'Her Highness' was two-fold. First, a specially formulated chemical poultice was applied to dissolve the paint, and not the stone. Then, after adequate time, the poultice was cleaned off with a high-pressure washer.

The poultice technique is very effective in drawing out the stain in the stone, as it dissolves the paint, suspending it in its jelly substrate. The water then easily washes the poultice away. Even here, the conservationist must be careful with the water pressure used, considering that even non-industrial pressure washers can spray up to 140 bars per second, which can easily scar and pit the historic marble. This process of applying a poultice and spraying the surface of the statue, eventually removed all the paint and, most importantly, the green stain in the marble. 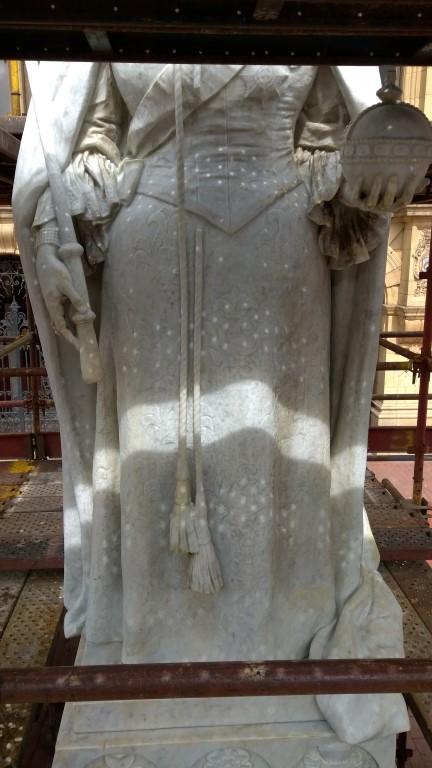 Some readers might think, “Why not use a normal paint stripper to remove the paint?”  The problem with these products, is the impracticality of covering a four metre statue several times with highly toxic and flammable solvent based materials, creating a Health and Safety nightmare. In addition to this, a paint stripper will only clean the surface paint off; it won't remove the stain in the stone.

In most cases, household cleaners are not suitable for cleaning and restoring historic objects as inevitably they will simply end up doing more damage than good. These chemicals are either too strong or chemically unsuited for the job.

It took several weeks of work before we finally cleaned the last of the green from the Queen's dress. She now stands proud, ready to weather many hundreds of years of wind and rain and political storms.

We weathered criticism and even some threats, but the public was mostly pleased and grateful for the service we rendered. I've realised our public monuments and statues are touchy subjects for debate and too often pawns for political statements. My hope is that in future, these issues will be resolved through public discourse and thoughtful considerate policy and actions.

Let me leave you with some lessons I have learned on the job, and from being surrounded by priceless art. Life can be fleeting, and while things don’t last forever, the objects of our heritage and the monuments that stand, speak to us across time. They speak to us from the past, of the past.  Measure your own place in time against an object that most likely will far outlive you.

In closing, if ever that priceless vase breaks or statue shatters into hundreds of fragments, remember that all is not lost.  Collect every piece, because somewhere out there a restorer is hunched over a workbench in a studio or up high on some scaffolding that can deftly restore the damage back to its former glory. I have seen this magic happen with my own eyes.

Josua Strumpfer is the owner and head conservationist at Studio Artaxia, a conservation company that specialises in the restoration of stone and metals in the built environment. While operating mainly in the Heritage Sector by offering specialised restoration and conservation solutions, Studio Artaxia also offers various studio based services like specialist mould making, casting and composite services to both government and the private sector. The company is based in the coastal city of Port Elizabeth and through its mobile conservation unit executes conservation services nationwide over a broad range of objects, sculptures, monuments and architectural elements. Josua can be contacted via email - strumpferjosua@gmail.com