Soweto Theatre speaks in many languages 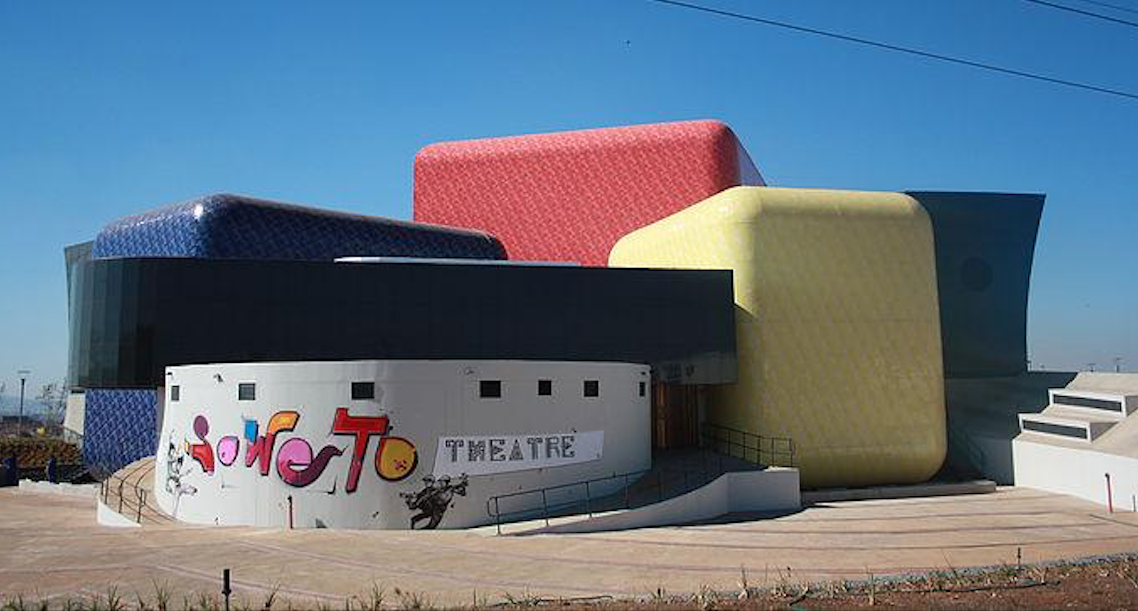 The Soweto Theatre is a landmark structure built in an area with a powerful history. In the article below, Johannesburg enthusiast and well-known journalist Lucille Davie unpacks the details behind the theatre's design and construction. She also reveals the significance of the Jabulani Amphitheatre next door. The article was originally published on the City of Johannesburg's website on 12 June 2012. Click here to view more of Davie's work.

If there ever was a building that could speak, the Soweto Theatre would speak loudly, and in many languages. The theatre consists of three large colourful boxes – in red, yellow and blue – contained within two soaring concave buttress walls on either side. The foyer faces south through an expansive glass frontage, overlooking the vastness of Soweto. The entrance is finished with a huge canvas roof, complementing the curves of the buttress walls.

Different textures, different materials, different angles, different shapes... but all talking to one another in harmony in a building that makes a bold statement in Jabulani, a suburb that is undergoing a lift-off.

“We have let the boxes be pure shapes,” says Tony de Oliveira, senior technologist at Chibwe Afritects, the firm that won the tender to design the theatre. Each box contains a theatre. It opened a month ago with the superb production The Suitcase.

The red box greets the visitor in the foyer – covered in a 15m high wall of red gleaming tiles, reaching up and over the roof but also into the basement, visible through a glass strip running around the box. The rounded edges soften the box, making it fluid and friendly.

This is the main theatre, seating 435 theatre-goers in red seats with red bulbous walls, giving the theatre a warmth, and despite its size, a cosiness. The design means that even those on the balcony feel an intimacy with the stage.

The stage has a state-of-the-art fly tower or stage set control, reaching up into the roof, and a full orchestra pit.

The other two smaller boxes, snuggled on either side of the main theatre, are finished in vibrant yellow and dazzling blue tiles. They seat 90 and 180, respectively, and are versatile spaces, allowing the seating stands to be moved around to suit the production. They will be available for local actors to perform home-grown work, and already a busy programme of performances in the coming months has been planned.

The vibrant colours are offset with smooth grey concrete floors and walls in the rest of the building.

Visible from the street

The City is thrilled with the result. “The architects certainly believe that exuberant colour is part of Soweto's identity. I think it is an aspirational building and Sowetans are highly aspirational,” says Steven Sack, director of arts, culture and heritage in the city, the department that commissioned the building.

Sack says the brief to the architects was simple: “To build a centre for the performing arts that used innovative design to produce an iconic and photogenic building. To use the box as the basic form given that it results in flexible spaces and sets the basis for good acoustics.”

The City decided that the area around the 60-year-old Jabulani amphitheatre should be developed, led by the Johannesburg Property Company. Eight parcels of land were identified, for housing, retail, office and recreation. A tender for a development company was issued, given to Inkanyeli Associates, who then brought Chibwe Afritects on board for the design and construction of the theatre.

The successful bidder was required to contribute R60-million, while the City contributed the rest of the R150-million build. The theatre is to be the catalyst for the Jabulani precinct development project, with its “culture-led urban regeneration”.

Duarte says they brought in local theatre specialist Denis Hutchinson, to advise on the finer details of theatre design. They used the Young Vic in London as their model, studying its use of space with three theatres in one complex.

Duarte says that the particular site was chosen, alongside the amphitheatre, but also near to the Jabulani rail station, and with the Rea Vaya bus running outside, along Bolani Road. A taxi rank is across the road, providing maximum accessibility to Sowetans. The Jabulani Shopping Centre, one of two in Soweto, is a block away.

The design has formalised the path leading from the station to the road, with commuters walking past the theatre and interacting with its exterior.

The concave shape of the two buttresses mean that the west and east inner walls are convex, giving the interior an intriguing shape, slightly disconcerting in its slope but interesting with its slightly lopsided windows and skylights. Passages lead to glass doors, which give views of the roofs of the two smaller boxes, but also the street running north of the theatre. Silver air-conditioning tubing runs below the ceiling, especially designed to add a decorative but functional element. The metal struts that hold the glass front continue down passages on the ground floor. 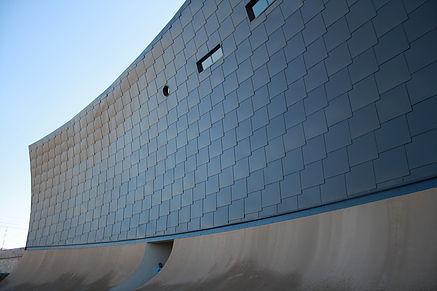 The building expands over three floors, with offices and conference spaces on the top floor. The second floor contains change rooms shared by all three theatres, while the ground floor has a jazzy bar, the box office and kitchen facilities. Above the bar is a rounded wood, glass and metal walkway, running the length of the main theatre on the south side, with two angular Juliet balconies.

The walls are filled with art, an exhibition currently running by local artists. Bold sculptures punctuate the corridors.

“The building is beautiful and as we learn how to use it we discover how functional it is. For technical staff it has many excellent features and the actors love the dressing rooms,” says Sack.

The materials have another element in common - their durability. The concrete, the tiles, the metal and the glass are long-lasting and require minimal maintenance. The buttresses consist of polystyrene and reinforced mesh, completed with a plaster skin, giving them good thermal qualities. And, they take on a radiance in the rising and setting sun.

The bricked forecourt is large enough to be used as a performance area, or a grand reception area, protected from the sun by the angled tent roof. 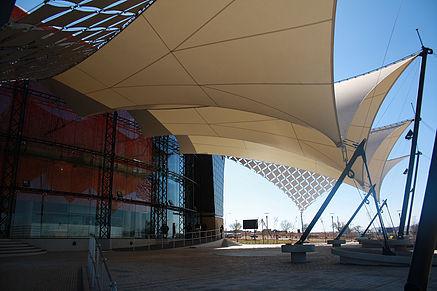 Next door to the Soweto Theatre is the 15 000-seat Jabulani Amphitheatre, a venue of great significance to township dwellers.

It was built in 1952 by the authorities to host cultural and sporting events. It has been one of the few leisure facilities provided for Sowetans, and was one of the few apartheid structures that wasn’t torched in the 1976 upheavals in the township.

In the 1960s it hosted jazz festivals, becoming the official venue for the Soweto national jazz festival in the 1970s, graduating in the 1980s to the venue for maskandi and isicathamiya traditional music. Music greats like Sipho “Hotstix” Mabuse played here, as well as Blondie Makhene, the Black Hawks, Rebecca Malope and Lundi. Touring American bands like The Staple Singer and Dobbie Gray played here too.

The 80s also saw political meetings taking place within its stands, from the ANC, PAC and the Inkatha Freedom Party, to the coalition anti-apartheid group, the United Democratic Front. Trade unions used the venue for educational workshops, congresses and meetings. Various churches used the venue to pray for the sick and for peace between the warring Inkatha Freedom Party and ANC supporters.

It was here in 1985 that Zinzi Mandela read the letter written by her father rejecting the government’s conditional offer to release him.

Political funerals were held here – in 1990, the funeral service of student activist Tsietsi Mashinini; and a memorial service to Chris Hani took place in 1993.

Boxing tournaments have been held there, including a knock-out of American David Love by Simon “Tap Tap” Makhathini from KwaZulu-Natal. It is still used as a gym by local body builders. 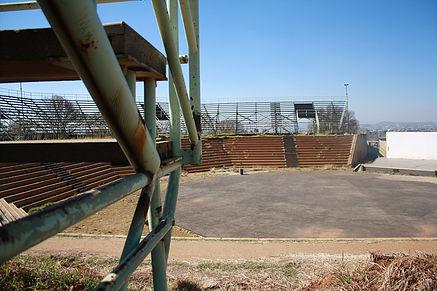 The Soweto Theatre is in good company. The amphitheatre, now weed-filled and in need of refurbishment, will be upgraded in July, creating capacity for 3 000 people.

But how will the theatre sustain itself? “We will need partnerships to make it all work and the City will provide a basic grant. This kind of facility needs to be understood as a public good. We will attempt to maximise our income as much as possible and will make it a place where everyone pays something,” says Sack.

De Oliveira and Duarte say the project has been very rewarding. “It is a sculpture on its own.”