STEEL, When Iron Came of Age

For anyone who has read the epic fantasy novels in the “A Song of Fire and Ice” series  by George R.R. Martin or watched the TV series “Game of Thrones” (based on his books), they will surely know that nothing cuts like Valyrian Steel. Swords made from Valarian Steel never dulled and their edges remained as sharp as the day they were forged, unfortunately the knowledge to make the steel was lost and the swords that were made from the metal became the prized possessions of the noble families of Westeros and were passed down from father to son.

Of course the above is pure fiction but it has its basis in fact. Swords of high quality steel were much prized by the Knights of Old during the Crusades to the Holy Land (11th to 15th centuries CE). The Crusaders were introduced to this steel in battle when their own swords were sliced in half by those wielded by the Muslims. The superiority of their weaponry was only one aspect of Islam’s Golden Age, during which advances were made in astronomy, medicine and mathematics. To say that the Christians were playing catch up on the battle field is correct but catch up they did as they discovered where to lay there hands on this sword breaking steel and that was in the city of Damascus, a thriving trading centre of the day where armourers were supplying swords, daggers and body armour, at a price. Thus this strong (hard but flexible) steel became known in the West as Damascus Steel, however it was further to the east where the steel originated.

Bladesmith from Damascus via Wikipedia.jpg 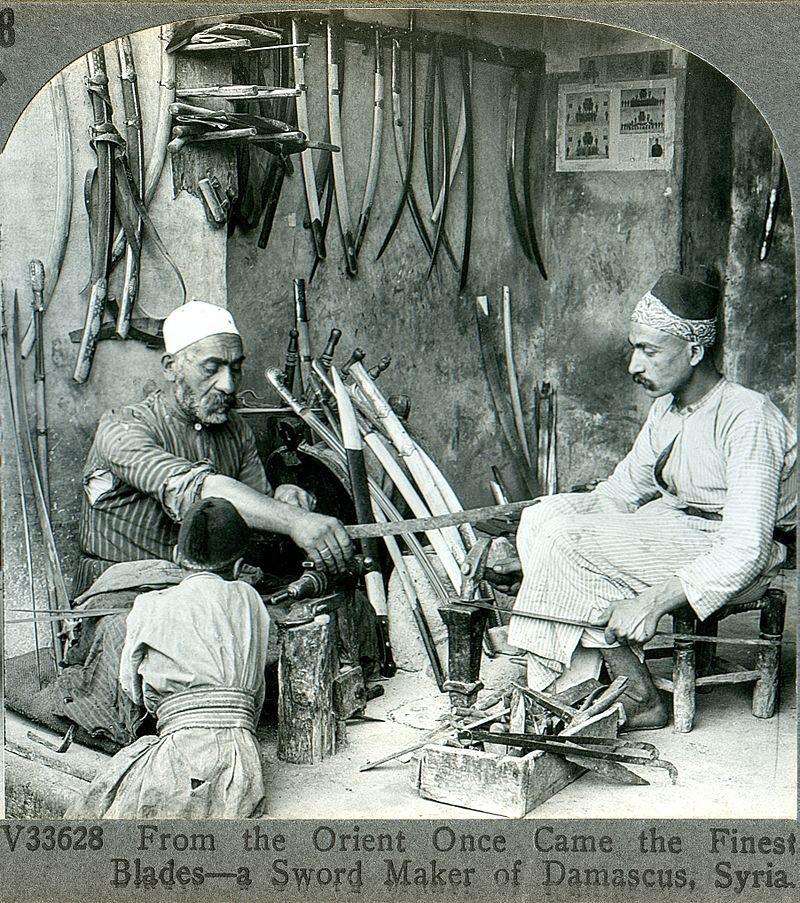 Bladesmith in Damascus (via Wikipedia)

The origins of Damascus steel are to be found in India, where 2000 years ago a civilization existed far in advance of any other with regard to iron making. The steel they made has come to be known today as “Wootz” steel (an Anglicization of “Ukku”, the Kennada word for steel), which is synonymous with Damascus steel. Wootz was made by placing iron and plant material (a source of carbon) in a small crucible (a clay vessel). The crucible, after sealing, was lowered into a pit of burning charcoal that was given blasts of air from bellows to increase the temperature sufficient enough to produce molten steel (the combination of iron and carbon) which after a period of time would be poured into stone moulds to solidify into ingots. The exact “recipe” for its making remained a closely guarded secret for many centuries.

It is safe to say that the making of steel in the Common Era (CE) i.e. the last 2000 years has only come to the fore in the last 165 years as up until 1856 steel was only produced in small quantities for specialist items such as swords and springs. Now steel is a ferrous metal somewhere between wrought iron and cast iron and has a controlled amount of carbon added which gives it the best of both worlds; the ductility of wrought iron and the strength (sans brittleness) of cast iron. To make it was easier said than done and when it could be made it was always in small quantities.

The Industrial Revolution, which began in Britain in the mid 18th century, increased the demand for ferrous metals, such that at the beginning of the 19th century the amount of pig iron (the product of the blast furnace) in Britain had reached 258 000 tons and by the year of the Great Exhibition (1851, held in the Crystal Palace, Hyde Park) it had risen to 2.7 million tons, the majority of which was converted into wrought iron (which has little to no carbon content). The making of wrought iron was a slow laborious process (called “puddling”) and it was a limiting factor in iron output. This limitation would exercise the minds of ironmasters, metallurgists and engineers alike, but it would be an inventor with no prior knowledge of iron making who would solve the problem.

The saying “Cometh the hour, cometh the man” has no better person to apply it to than Henry Bessemer (1813-1898), the English born son of a French refugee, who was an inventive genius with many patents to his name (128 in all). At the time of the Crimean War (1853-1856) his mind was focused on improving the barrels of cannons which hitherto had been made of cast iron (high carbon content and thus brittle). He set to work on a series of small scale experiments that culminated in a successful pour of a small amount of molten steel. His brainwave was to blow hot air through the firebridge of his experimental reverberatory furnace in which a small amount of molten pig iron was present. The effect was pyrotechnic as the oxygen in the air united with the carbon in the pig iron making sparks fly and raising the temperature of the melt with the pig iron boiling violently. His experiments would lead him to invent his famous Converter, a pear shaped steel vessel lined with ganister (silica rock) mounted on trunnions so it could be tilted (refer to diagram below). He had the confidence to deliver a paper “On the Manufacture of Iron and Steel without Fuel” before the British Association for the Advancement of Science on the 11th August 1856, which expounded his method of steelmaking. It must be said at this juncture that what he described as “Steel” bore no resemblance to “Sheffield Steel” that was made by the Crucible Process developed by Benjamin Huntsman (1746) used for the purpose of making of knives. It was a lesser steel which would gain the term of “Mild Steel”. What Bessemer promised was a type of steel that would be produced to a consistent quality, cheaply and in large amounts; sounds too good to be true, it was! 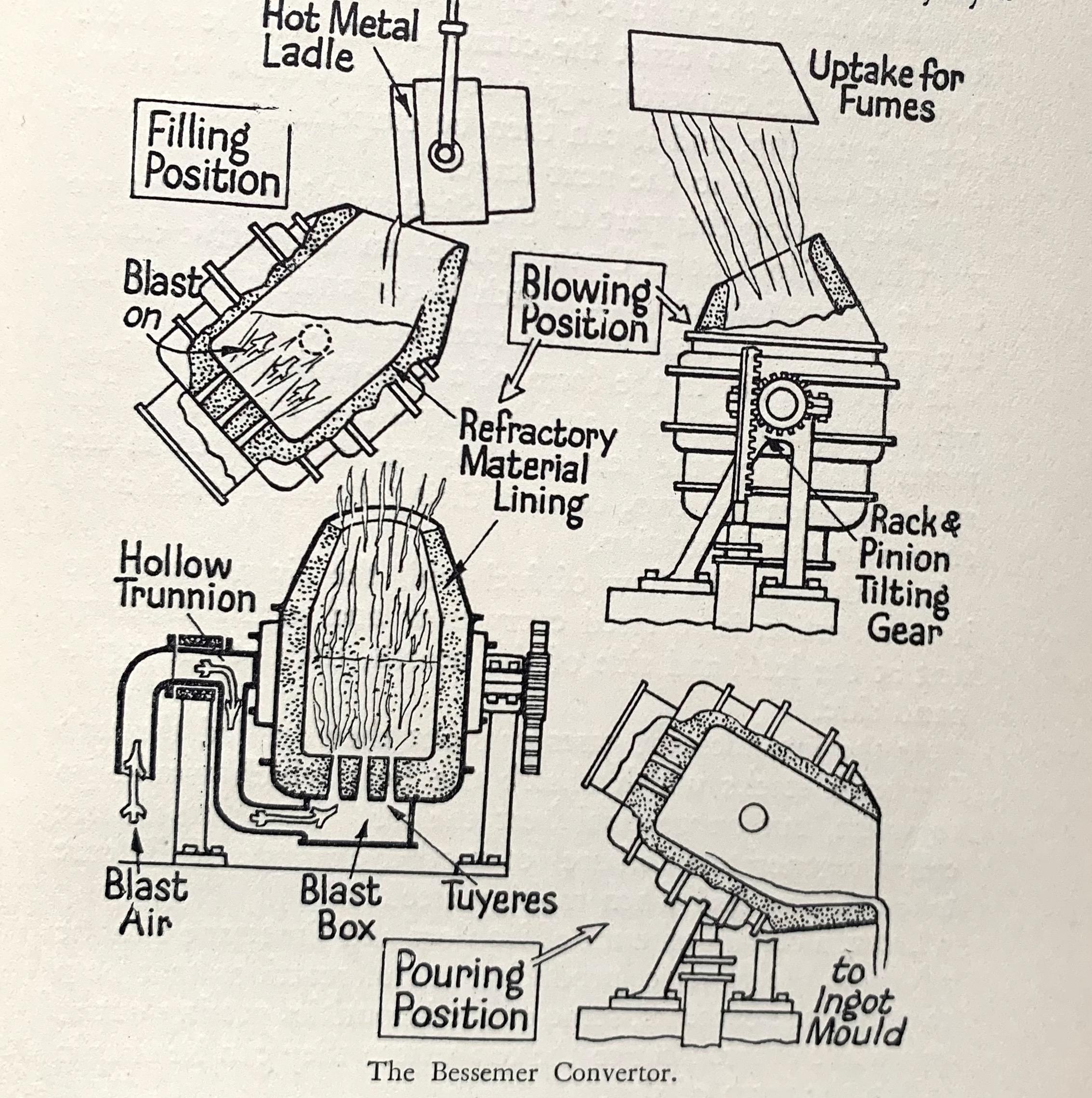 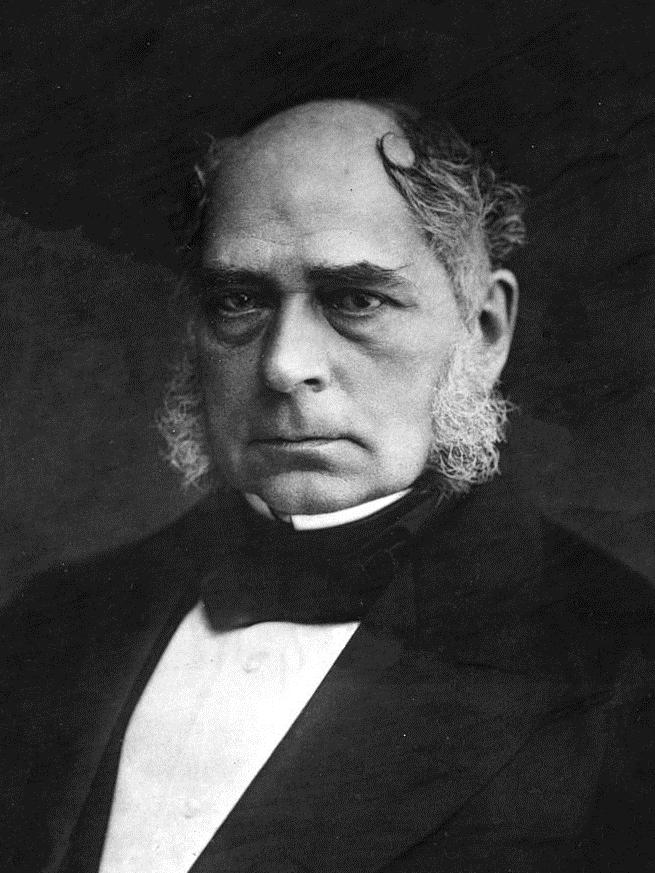 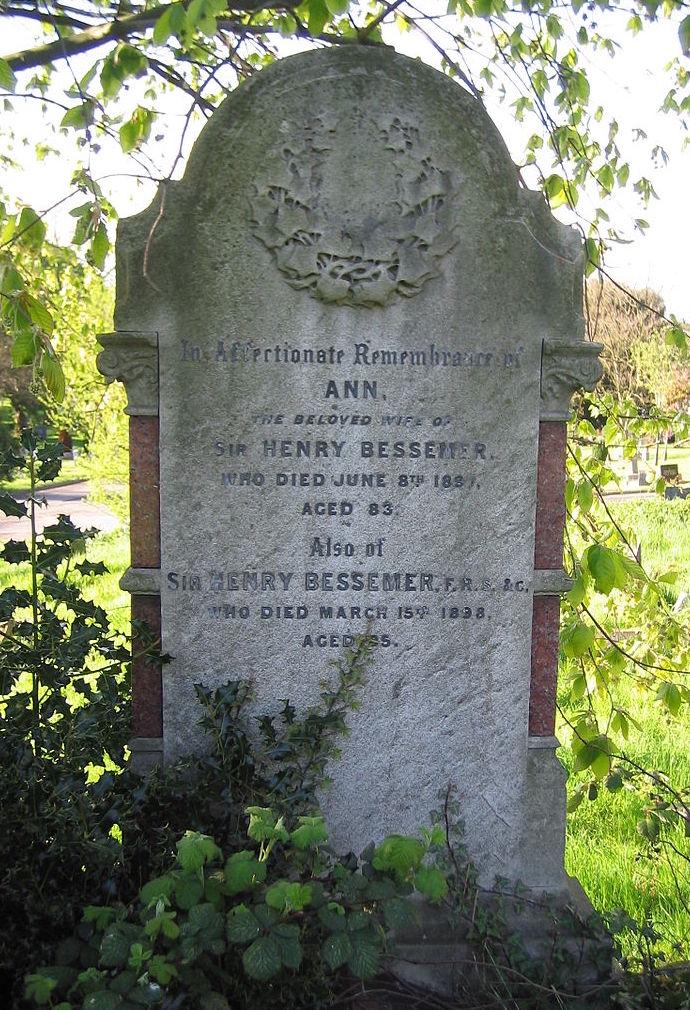 The news of Bessemer’s “Promise” spread rapidly causing great interest amongst the ironmakers and within weeks many had paid for licences to make steel using his process, only to find out it did not work when practical trials were carried out. The ironmakers were outraged and “Refund” was their cry. Bessemer gave them back their money. The Times newspaper would write on the matter: “A brilliant meteor that had flashed across the metallurgical horizon, dazzling a few enthusiasts and then vanishing forever in total darkness”.

A lesser man would have “thrown in the towel” but he was determined to discover what had gone wrong. He found the answer and it was that his process was only good when using iron ores containing low levels of phosphorous, such as Haematite. When doing his experiments he had chosen Blaenavon pig iron, one of the few reduced from ores with little or no phosphorous. Although he could report the “good news” he was by then “persona non grata” with ironmakers and railwaymen alike and one of the latter on being asked if he would buy rails from Bessemer told him to his face “Mr. Bessemer do you wish me to be tried for manslaughter?.

Luckily there is a happy ending to the story as “Bessemer & Co.” of Sheffield became a successful steelmaker after all the teething troubles had been ironed out and with a little help from his “friends”, notably Robert Mushet, an unsung hero who made a number of notable contributions to the art of steel making. Mushet was given a sample of poor quality Bessemer steel by Thomas Brown of the Ebbw Vale Ironworks to analyse and was soon able to discern the source of the problem with a proposal on how it could be cured. He ascertained that an excess of oxygen was the cause of the problem and that the addition to the melt of “spiegeleisen” (a cast iron from Germany containing manganese) would be the solution; the surplus oxygen being attracted by the manganese which would become part of the slag as manganese oxide.

The Bessemer Converter would become a victim of its own success as newer methods of steelmaking such as the Siemens-Martin Open-hearth process could accept scrap iron previously made by the Bessemer process, whereas the Converter could only accept molten pig iron from the blast furnace. Despite this it had possibly its greatest success in the United States of America as the iron ore deposits there were predominantly free of phosphorus. Pittsburgh (and it surrounds) had all the ingredients to be a steel making town and it is where Andrew Carnegie, that “cannie” Scot built up the American steel industry and it would be he who would stipulate the use of the Bessemer Converter. One of Carnegie’s famous quotes was “Farewell, then, age of Iron, all hail King Steel” and by the end of the 19th century America was producing more steel than Britain, France & Germany combined. The production of steel in large tonnages at a low cost had become a reality. 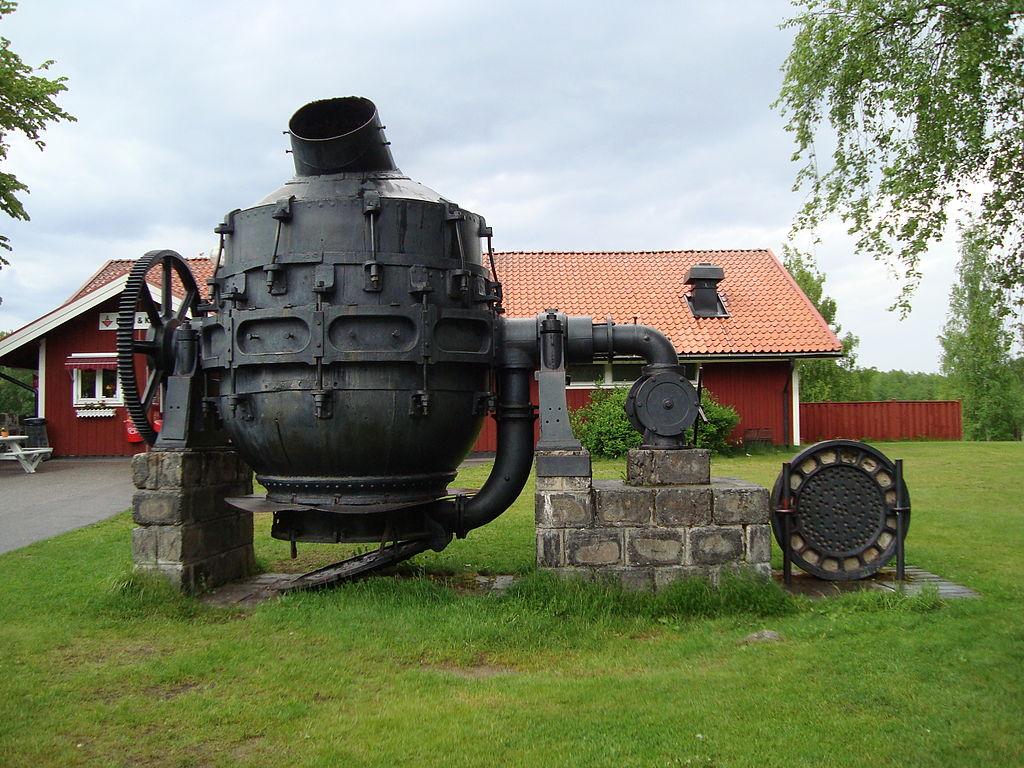 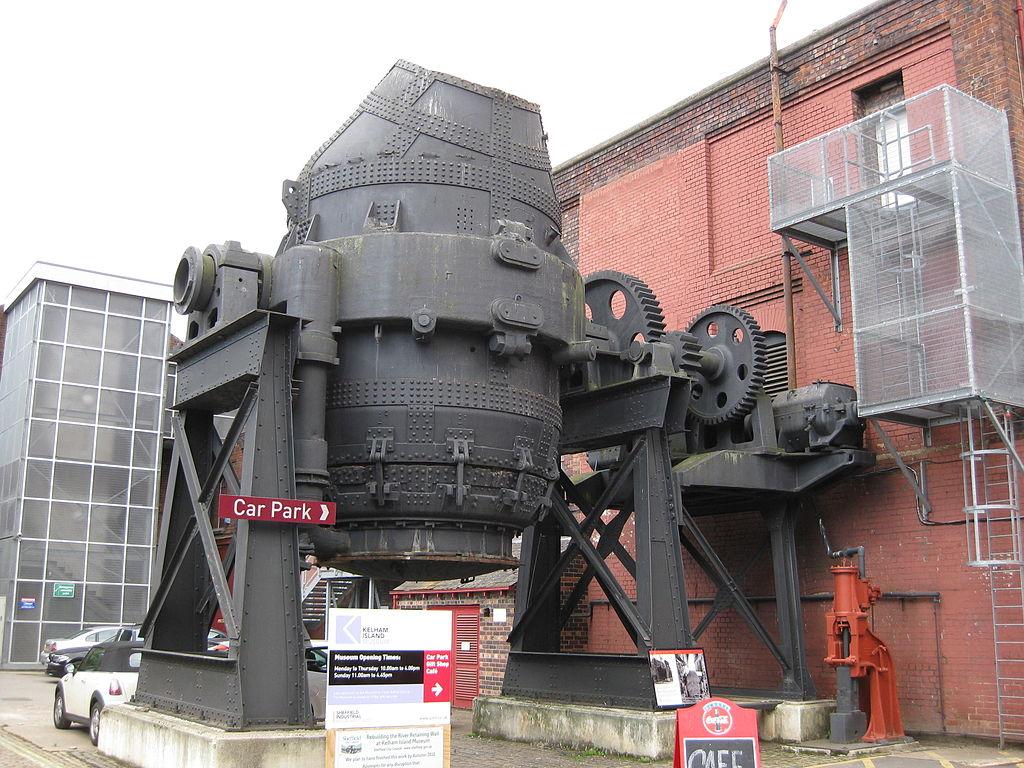 I do not intend discussing the Bessemer Converter as information is readily available on the Internet and the articles found there are written by others more qualified than I. All I shall say is that it held sway for 100 years until more efficient methods took its place.

In the 20th century great strides were made in steel production not only in the tonnage produced but also the infinite variety of grades of steel available from weldable structural steels to stainless steels, heat resisting steels to tooling steels. The list goes on and there are now over 2000 grades of steel to choose from to satisfy any requirement.

Steel to the ancients was a mystical metal to be marvelled at, but today it has become mundane as it is so common in our lives. We certainly take it for granted and should think about where would we be without it. We would back in the Middle Ages and living somewhere like King’s Landing Westeros, I’d say.

As a Postscript, I would add that the last major structure in wrought iron was the Eiffel Tower and the first in steel (produced by Open-hearth process) was the Forth Railway Bridge, both being completed in 1889.