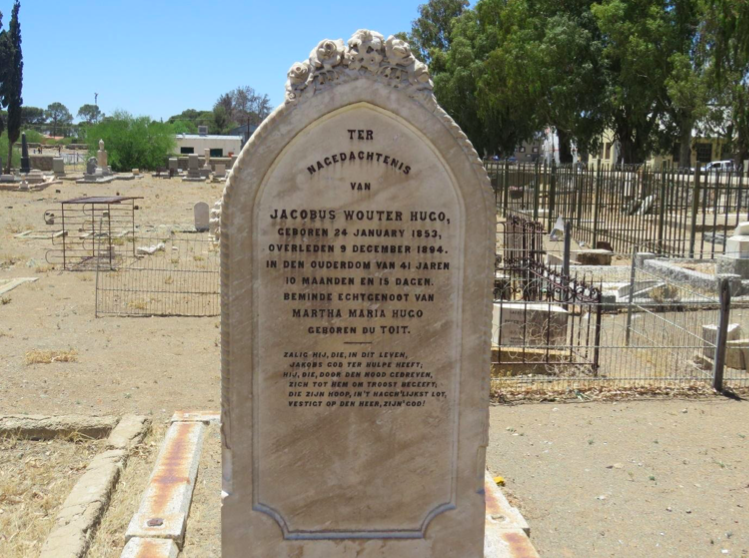 The N12 route via Kimberley to Cape Town, sometimes called the Diamond Fields route, offers a respectable alternative to the slightly shorter but more hectic N1 route. Kimberley, after all is where South Africa’s Industrial Revolution originated and if memory serves correctly was the first town to install electric streetlights.

Victoria West, situated approximately half way between Gauteng and Cape Town, remains a charming stop over. Most small Karoo towns display imposing churches, usually associated with the Dutch Reformed and Anglican faiths and Victoria West is no exception. 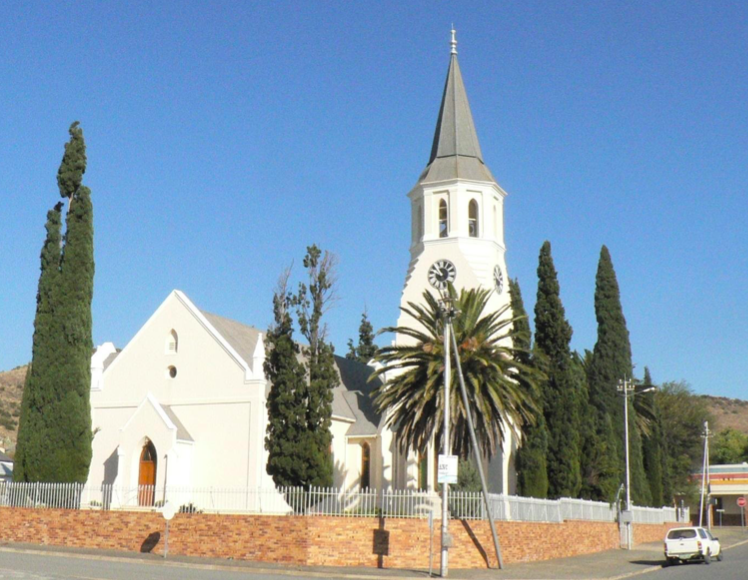 The St John’s Anglican church while less imposing than its Dutch Reformed counterpart nevertheless boasts impeccable credentials having been designed by Sophy Gray, wife of Bishop Robert Gray, the first Anglican Bishop of Cape Town. Bishop Gray and his wife arrived in Cape Town in 1848 with a mission to increase the number of Anglican clergymen in the Cape Colony. Within 25 years Robert Gray was instrumental in the erection of 50 churches of which 40 were designed by Sophy Gray. 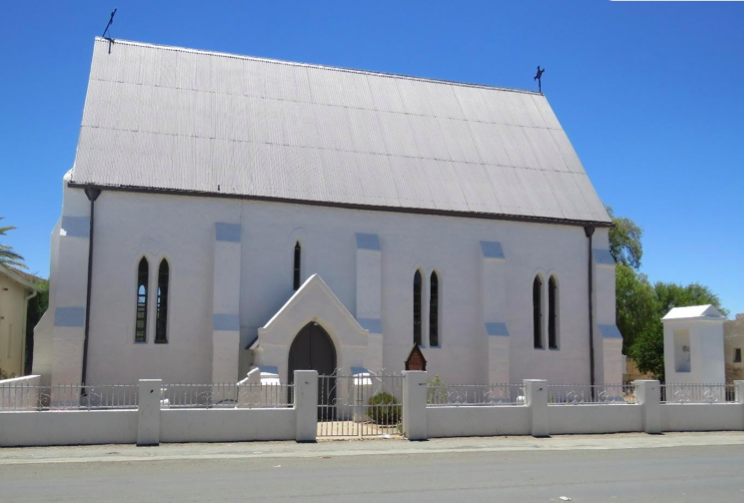 There is also the opportunity to view or even to overnight in another regretfully fast disappearing aspect of South African life, the small-town Jewish Synagogue. The Old Synagogue first opened in 1930 and sadly finally closed its doors in 1960. It was subsequently apparently turned into self-catering accommodation. 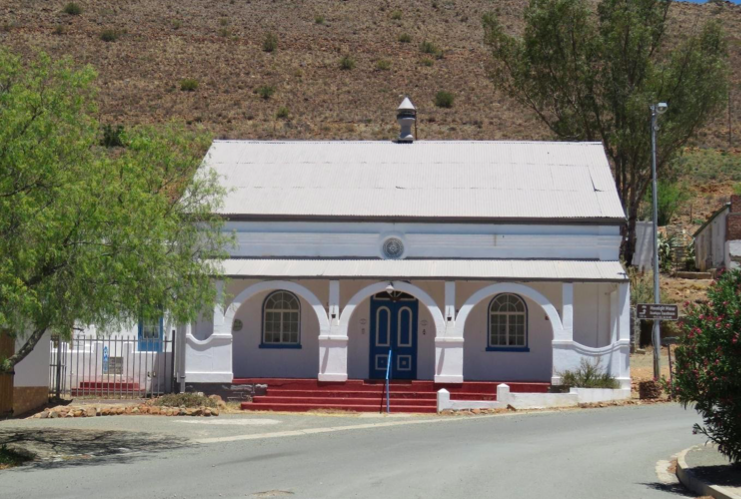 If the above is not enough, Victoria West offers an opportunity to visit that now almost forgotten attraction, the local bioscope. Its Apollo ‘Teater’ remains a lovely example of the once familiar neighbourhood cinema built in the Art Deco architectural style. 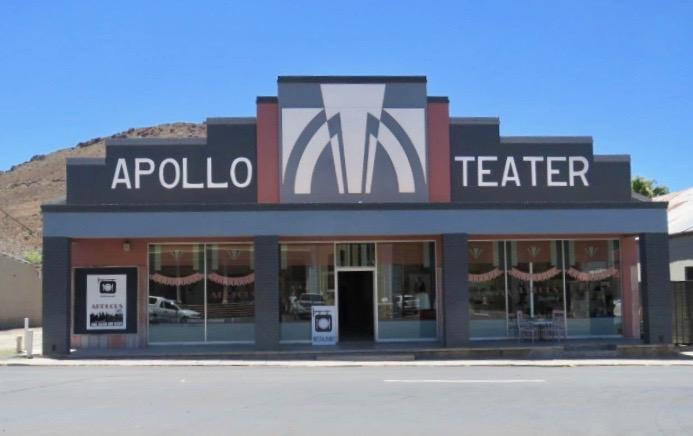 Victoria West was laid out on the farm Zeekoegat in 1844 and became a municipality in 1858. It was named Victoria in 1844 in honour of Queen Victoria. In December 1855 ‘West’ was added to distinguish it from the district Victoria in the Eastern Cape Province.

When entering the town from the north you will first notice the newer cemetery on the left (Eastern) side of the road with a slightly older one adjacent to it. At this juncture turn right (towards the West) into Richmond Street and the old Victoria West cemetery is merely a block distant.

The cemetery gate was locked but I inappropriately and with some difficulty clambered over the low boundary wall. I subsequently discovered I could have collected the key to the gate from one of the local B&Bs.

It is a smallish cemetery containing some very useful information signboards. It appears as if a while ago an effort was made to turn the cemetery into a tourist attraction, hence the signboards. At the time of my recent visit however, the cemetery unfortunately appeared somewhat dilapidated and in need of a good cleanup.

A signboard stated the cemetery was established in 1847, a mere 3 years after the founding of the town.

The attractive tombstone below may well be one of the oldest ones in the cemetery. It is dedicated to Georgina Smith and three members of the Adams family and its sad epitaph reads: ‘This has been our consolation in the time of our distress that those whose ashes repose here have died in innocence and in the hope of a glorious resurrection’. It seems the tombstone was engraved by John Adams, most likely the father of the infants Robert, Mary and Caroline Adams. 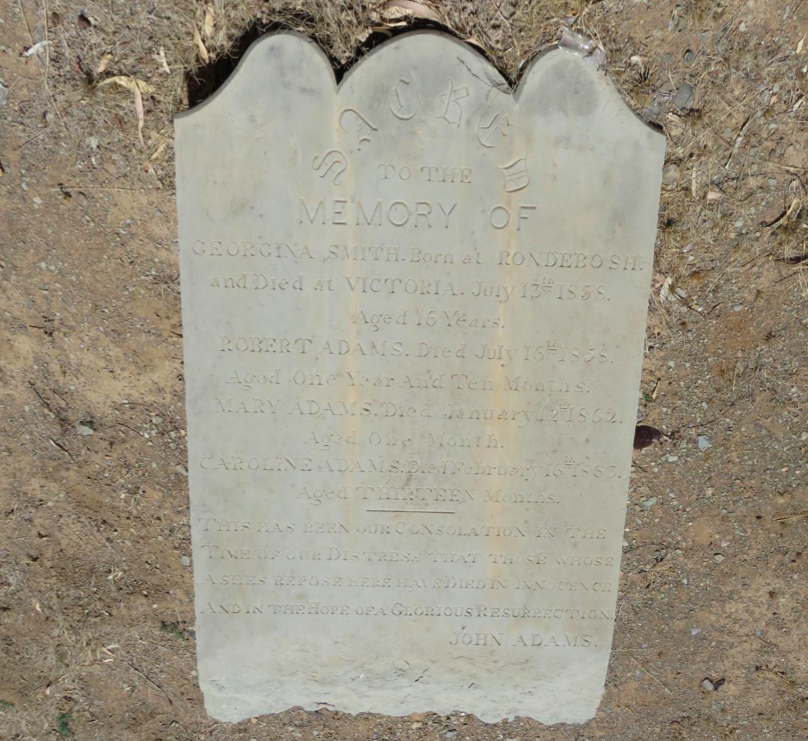 Towards the South Western section of the cemetery lies one of the most unusual tombstones I have yet seen in South Africa. The epitaph translated from Dutch, reads as follows:

Here lies the mortal remains of the late Jan Carel Christiaan Swarts.
For many years Elder and Catechism Master of this congregation
and Practice Leader for the Coloured Community.
Born 11 May 1797
Died 14 April 1861
Always in the service of the Lord on the day of rest.
Unexpectedly but gracefully entered the eternal Eucharist…

This tombstone is very unusual in that above the epitaph an engraving of a skull and cross bones appears. The tombstone is surrounded by a protective fence, which makes it difficult to take photos and I could unfortunately not detect any name of the manufacturer or engraver of this very unusual monument. 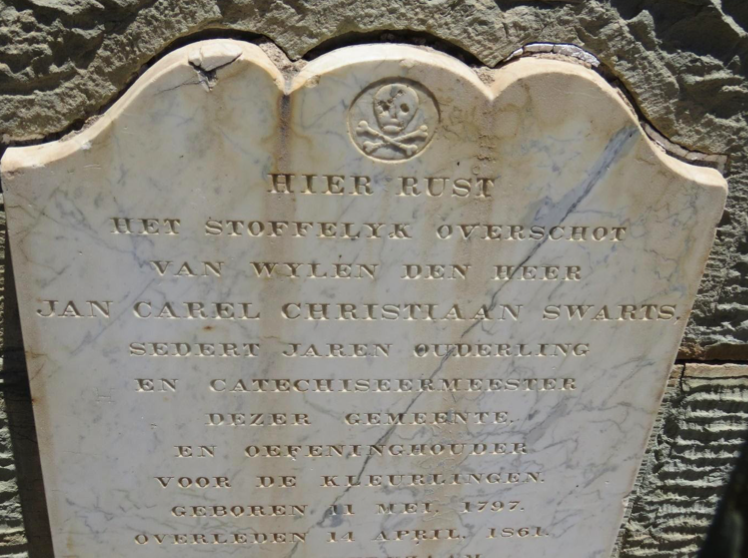 Celestine Pretorius in her book ‘Die Geskiedenis van Volkskuns in Suid-Afrika’ states that the appearance of skull and cross bones on 19th century tombstones in South Africa is very unusual. She makes mention of a similar engraving found on the tombstone of Magdalena Elizabeth Kuun (nee Du Toit) born in 1879, married on 2 November 1896 and who sadly died the following day. Magdalena Kuun’s tombstone in the vicinity of Ottoshoop also contains the unusual engraving of a butterfly, symbolising the Christian concept of the resurrection after death.

I have never previously seen a skull and cross bones, an old 17th and 18th century symbol of mortality, engraved on a South African tombstone of the 19th century. Only once before have I seen such an engraving on a tombstone in the churchyard of the St Paul’s Chapel of Trinity Church, directly adjacent to the Twin Towers ground zero site.

Tombstone on the right with Skull at St Paul’s Chapel of Trinity Church Manhattan via Alamy.png 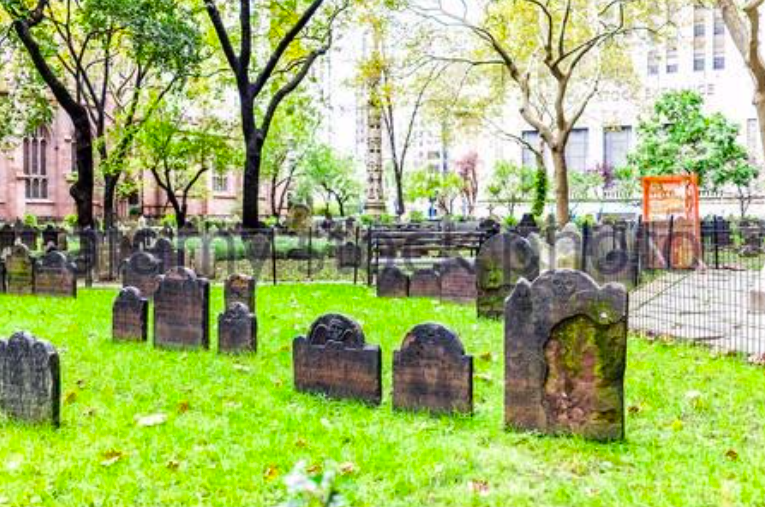 On 27 February 1871, a cloudburst occurred in the upper reaches of the normally dry Brak River. The resultant flash flood tearing through Victoria West resulted in the deaths of approximately 62 people and numerous buildings were either damaged or washed away. In ferocity it probably equaled the Laingsburg Flood Disaster of 1981. Several people seemed to be buried in this mass grave situated towards the north western end of the cemetery.

Monument to those killed in the great flood disaster of 1871 - SJ de Klerk.png 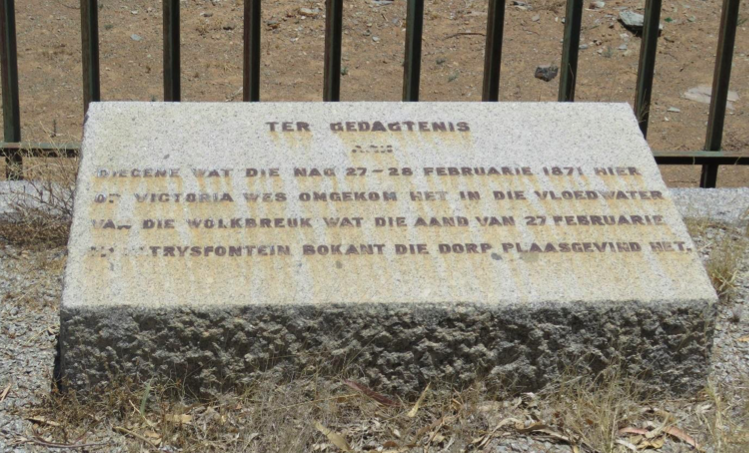 There is also an attractively designed and engraved tombstone in memory of Christina Francina van Wyk and her 4 children who drowned in this flood at Patrysfontein. Unfortunately, the angle of the sun precluded the taking of a decent photo. 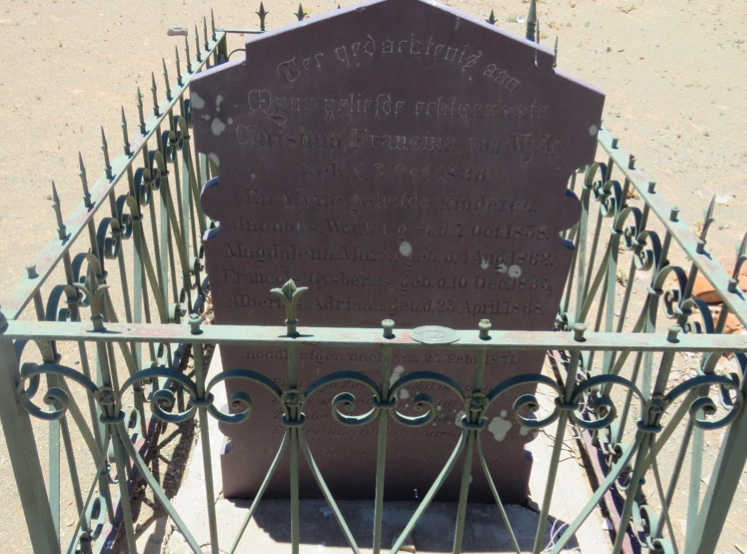 The tombstone of Henry Albert Helm contains an interesting engraving of a wilting flower, which denotes death. Helm’s epitaph states he was from the Zuurbraak in the district of Swellendam, died on 30 December 1871 at the age of 22 years and 7 months, near the town and his mortal remains rest here. 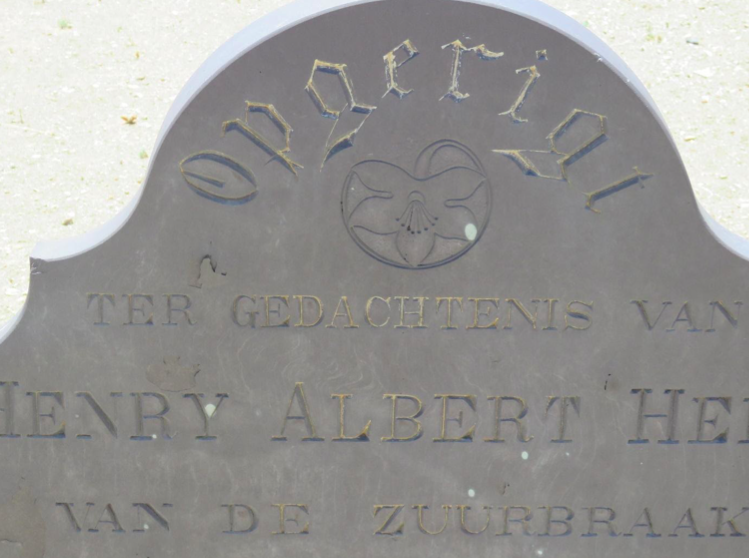 The tombstone of J. A. van Niekerk, is attractive in its very simplicity. It was engraved by J. Parkes. One wonders whether J. Parkes engraved any other tombstones in the vicinity. 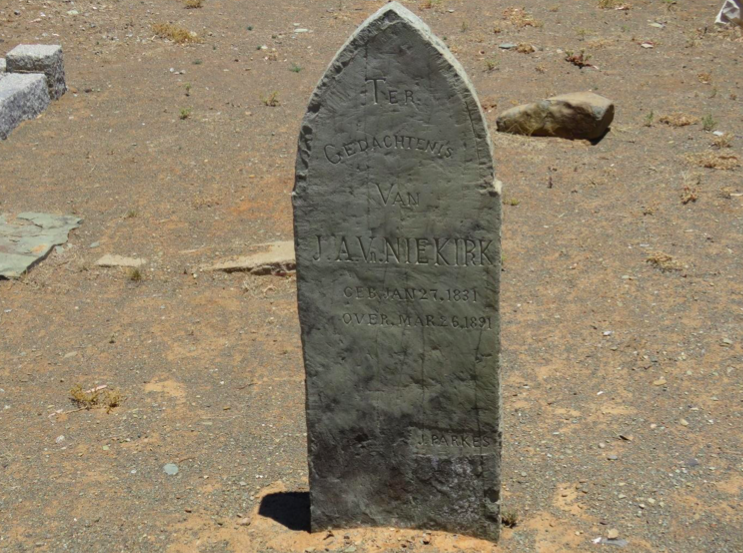 The tombstone of Gideon Jakobus Visser is another example of a plain yet attractive tombstone. 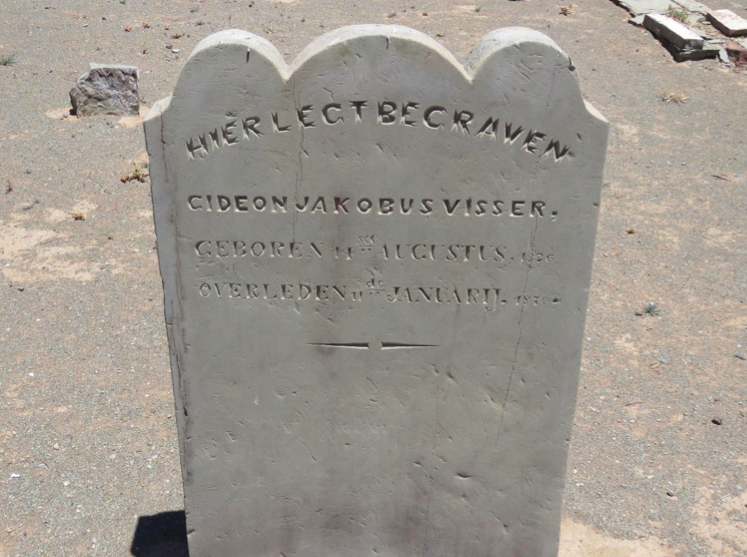 In 1866, during his 2nd visit to Victoria West Bishop Robert Gray appointed Reverend Thomas Walters as the first resident clergyman. Walters, suffering from ill health when he arrived, died in August 1868 and sadly did not live to see the completion of his church.

The foundation stone of St. John’s Church was laid on 27 December 1869 by John Adams, Member of the Cape Legislative Assembly for Victoria West. The plans, drawn and supplied by Sophy Gray, were based on a design by the Victorian architect William Butterfield. 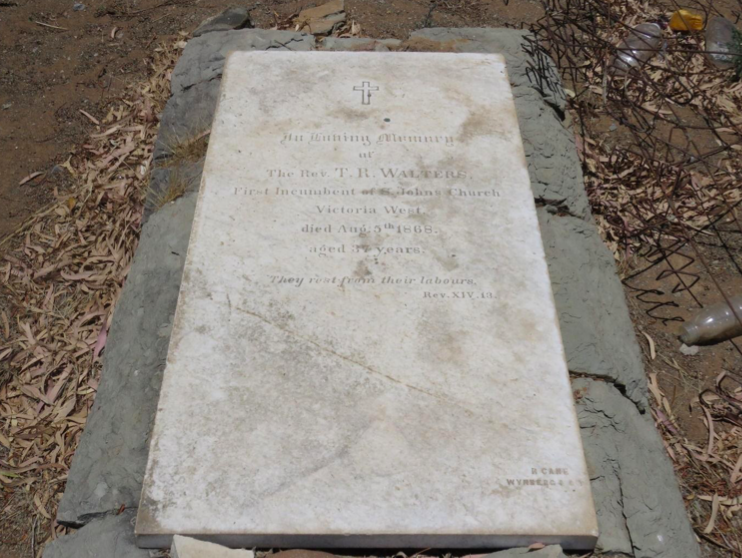 The small Jewish precinct is located on the southern boundary of this cemetery. There is a memorial stone which reads as follows:

This Jewish Cemetery was restored in March 1999 by the Country Communities Department of the Jewish Board of Deputies in honour of the late Ray and Mannie Mamulis who were pillars of the Victoria West Jewish community. Mannie the last remaining Jew died on 30 September 1997 in Victoria West. M. T. D. S. R. I. P’ (May their dear souls rest in peace).

In accordance with recent practice the tombstones have all subsequently been laid horizontally to prevent possible acts of vandalism. 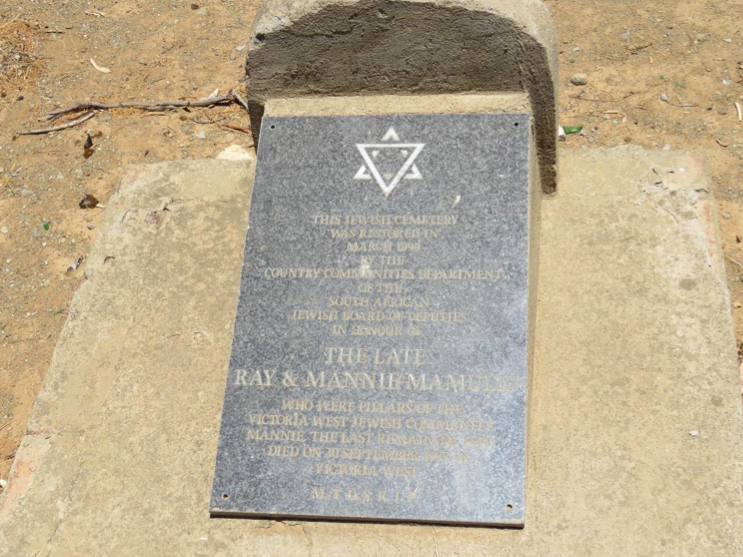